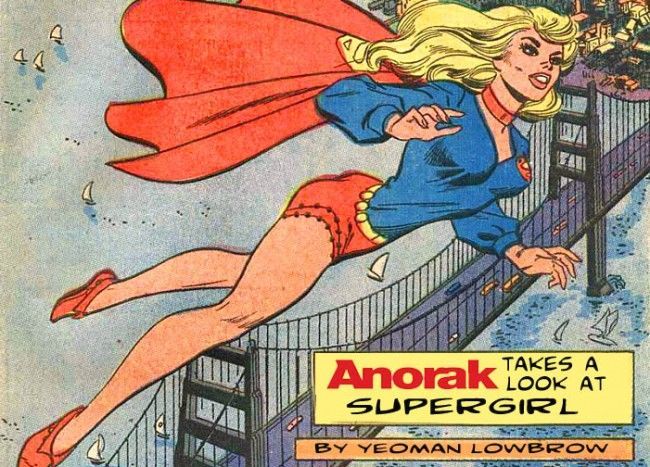 WITH so many Marvel and DC movies coming out, it may be time to brush up on your comic book heroes and heroines, and there’s no better place to start than Supergirl.  Although a Supergirl movie has only been rumored, this chick from Krypton deserves some attention.

What’s so special about Kara Zor-El (AKA Supergirl) that warrants an entire article? Well, she’s the ultimate comic book hero/heroine for anyone interested in cultural history.  Supergirl is a perfect reflection of the shifting attitudes of the times.  To read Supergirl comics is to watch a stereotypical 60s female more concerned with her wardrobe than fighting crime, turn into a total all-out badass. 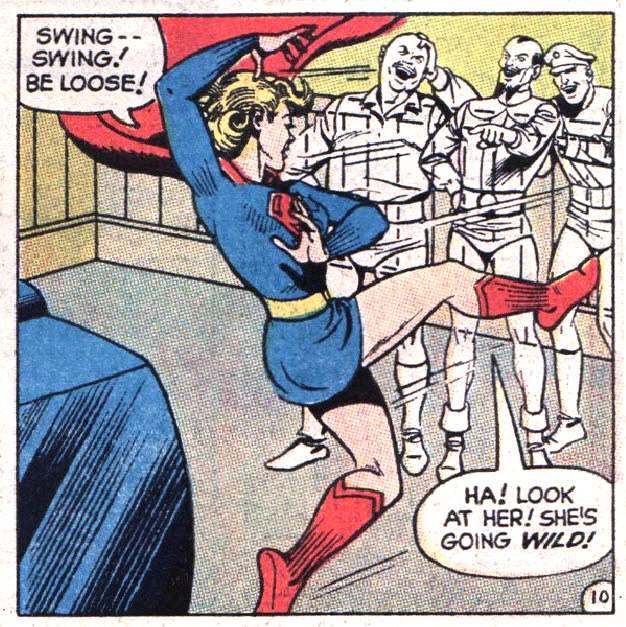 So many of those Superheroes were just too stuffy and straight-laced – when there wasn’t fighting to be done, they were kind of a drag. I’m not saying I’d like to see Aquaman, Green Lantern and Flash star in The Hangover III, but I am saying that making a mistake, lowering their guard, and just appearing a little more “human” would’ve been refreshing. 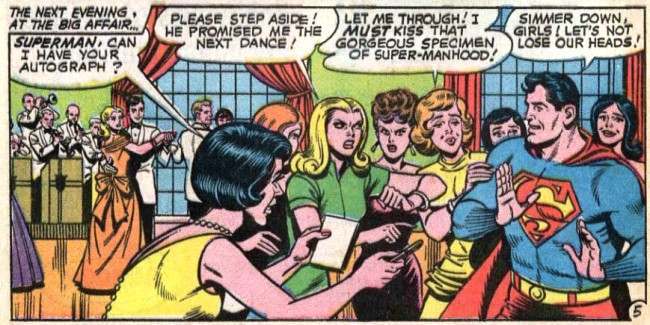 “Superman, can I have your autograph?”… “I must kiss that gorgeous specimen of super-manhood.”  Good grief.  The ladies were always clawing for Superman.  He could do no wrong.  He was too perfect.

Supergirl was much more “human”, without being dark and demented like Batman.  She screwed things up, fell in love despite her better judgment, and could even act vindictive or jealous.  The Man of Steel never interested me much – he was never scared and he couldn’t laugh at himself.  There was nothing self-deprecating about Superman.  (And don’t use Clarke Kent as an example – he was just a douche.)

Check the panel above – Supergirl goes batshit crazy at one point…. a scene that reminded me of Bruce Campbell in Evil Dead II where he starts to lose his marbles.  You never saw Mr. Perfect (Superman) do that. 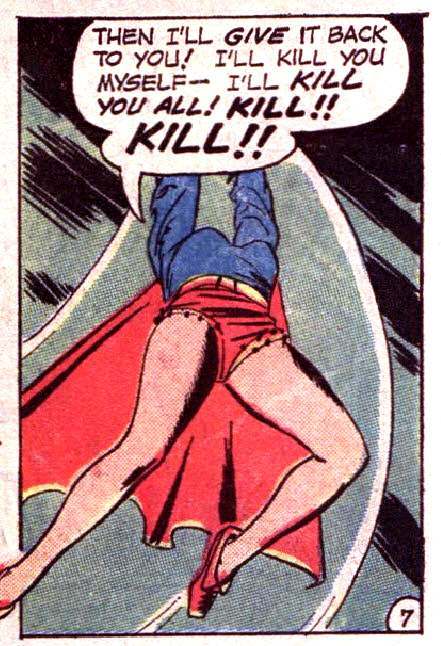 I don’t want to paint her as just a one-dimensional wild child either. Let it be known that Supergirl exhibited some serious emotions, and dealt with situations that were no laughing matter. 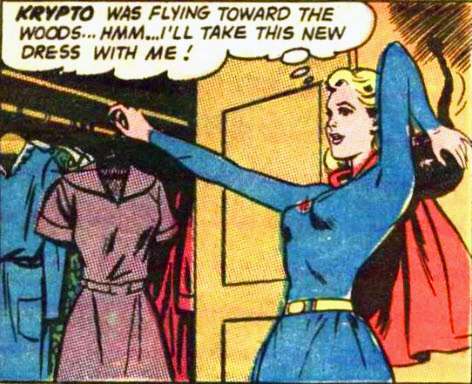 The early years had Supergirl behaving like a stereotypical mid-century gal, more worried about her appearance than executing justice. 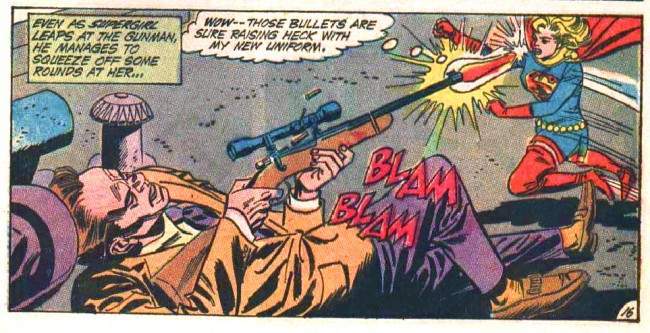 “Wow – Those bullets are sure raising heck with my new uniform.” 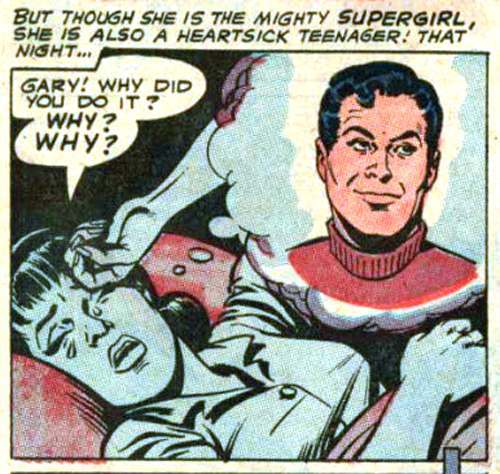 You’d never see Superman behaving quite so lovelorn.  In Danse Macabre, Stephen King says that the most bigoted depiction of a woman he’d ever seen in film was in Alien.  Like Supergirl, the heroine of the story (Ripley) does some major ass-kicking in the film…. but it’s all cancelled out (in King’s opinion) when Ripley compromises everything by going back after the little pussycat.  King says that’s something a male hero would never have done.  The same could be said of Supergirl, who could go medieval on a villain’s ass, then act so stereotypically female, the badassery is nullified. 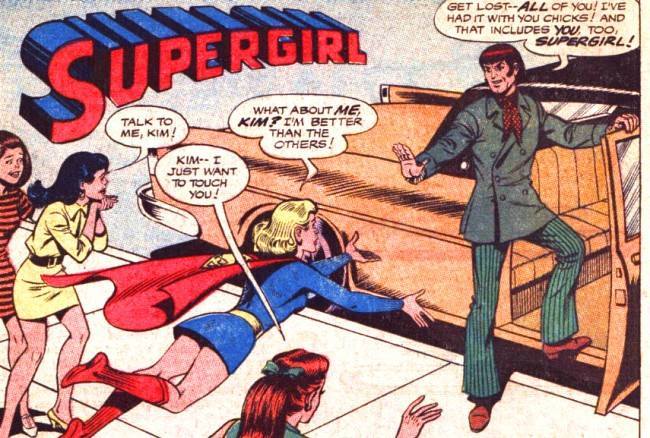 “What about ME, Kim? I’m better than the others!”

While early-years Supergirl doesn’t exactly embody feminine empowerment, there is another side to the argument: “Why is the male hero the gold standard to begin with?”  In other words, is it really necessary for Supergirl to compromise her femininity to become a true hero?

It’s something to think about, but let’s not get ahead of ourselves.  Let’s take a step back to the very beginning… 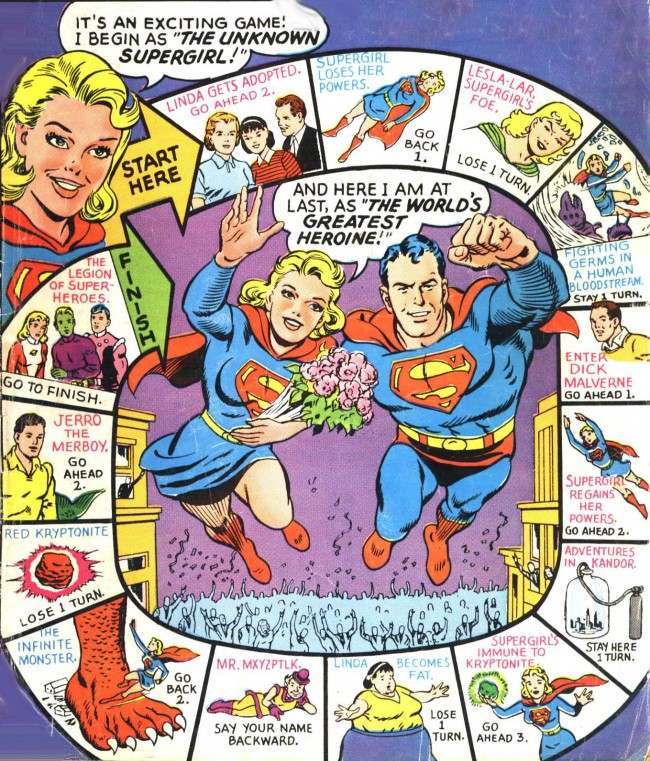 Supergirl spends most of her first comics subjugated by an asshole Superman, exiled, sad and horribly alone.  But before her first official appearance there were a couple imposters.

The very first “Supergirl” was technically Lois Lane when she had a blood transfusion from Superman in 1943 – but that wasn’t the Supergirl we know and love today. The next appearance of a so-called “Supergirl” came in 1958 when Jimmy Olsen gets three wishes by rubbing a Native American’s magic totem. 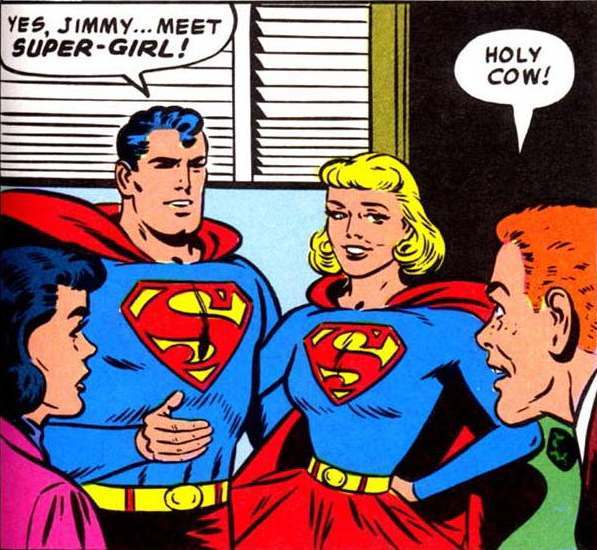 Strangely, his very first wish is not for world peace or a cure for cancer, but for a female companion for Superman.  Anyway, this new superchick manages to save Supe’s life by removing a Kryptonite meteor.  Unfortunately, it proves lethal to her and Jimmy must use his second wish to wish her out of existence. Why he just doesn’t wish her cured is beyond me…. Jimmy’s not too bright. (BTW – What was Jimmy’s third wish? Why, to send Superman to meet his dead parents on Krypton of course.  What a dumbass.) 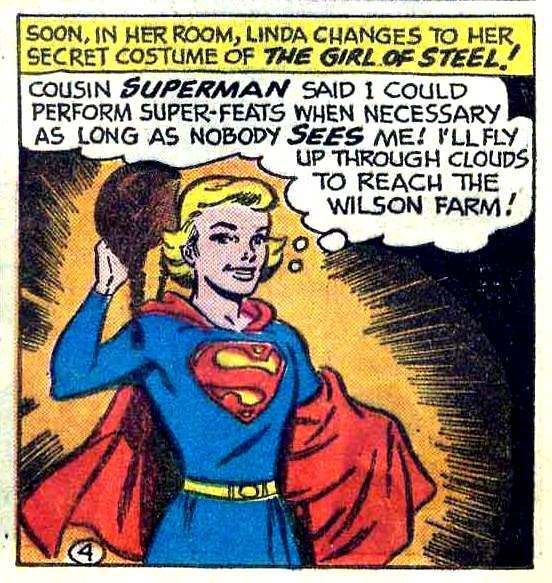 Finally, in 1959 we meet the real Supergirl, Kara Zor-El.  It seems Superman’s uncle was able to devise a protective bubble around himself and wife, Allura, saving themselves from the destruction of Krypton.  They had wild sex whilst in said bubble and produced baby Kara.

Unfortunately, some meteors punctured holes in their insanely dumb bubble exposing them to the deadly Kryptonite.  With a ridiculously powerful telescope, mom and dad were able to track down her cousin, Superman.  They sewed an outfit to look like his and shot her to Earth in a rocket. 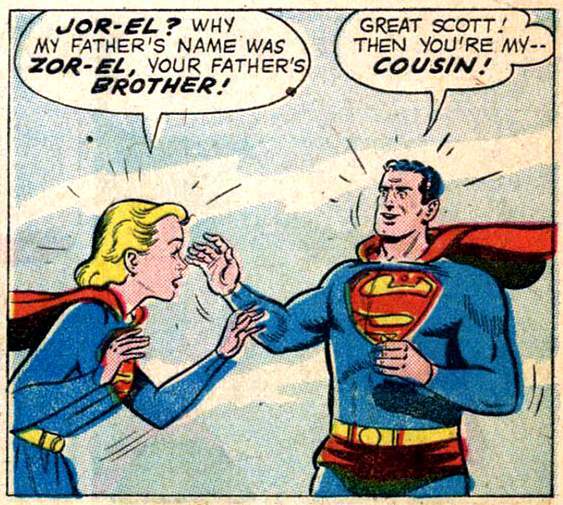 Things only get shittier from there for poor Kara.  Superman won’t take her in because he’s got to preserve his precious secret identity.  I think that was a flimsy excuse – he just didn’t want to be slowed down; a kid would cramp his style. What an asshole. 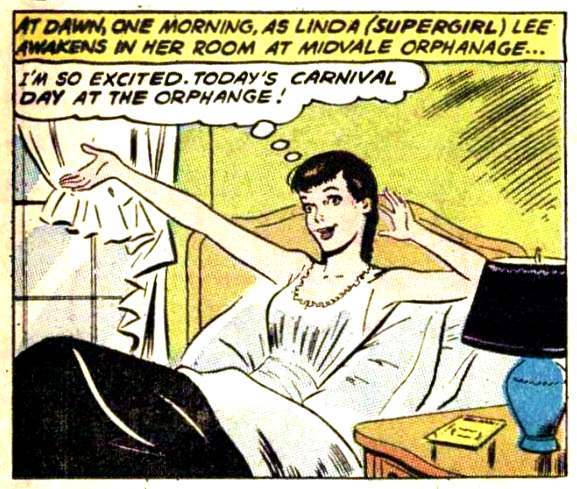 So, Kara has to live out her childhood in an orphanage wearing a brunette wig.  When she comes of age, she’s subjected to more humiliation.  Perhaps the lowest point is when Superman exiles her to space for an entire year for playing with Krypo.  What a dick. 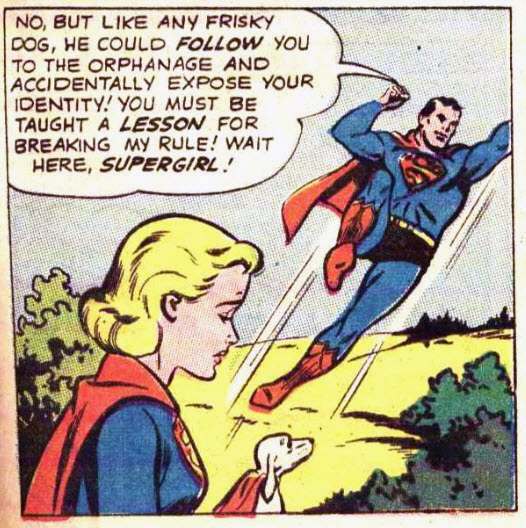 “You must be taught a lesson for breaking my rule! Wait here, Supergirl!”

To add insult to injury, Supergirl is declined a spot in the Legion of Superheroes.  It’s not until 1962 that she starts to come into her own.  That’s when the guy in blue tights decided she could openly be Supergirl.  Thanks, for finally coming around and helping your cousin……. asshole. 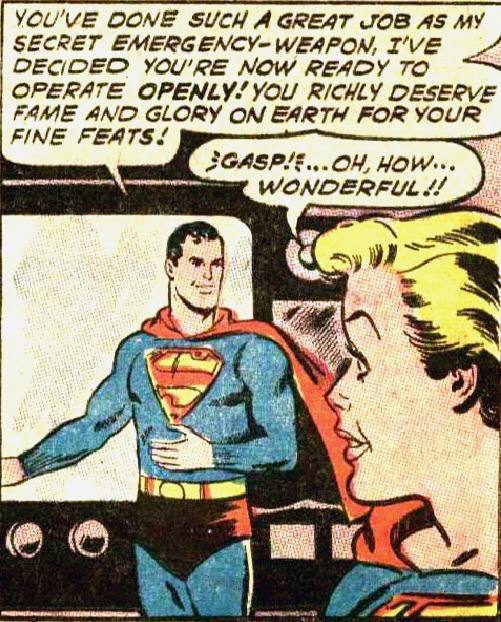 Throughout the rest of the sixties and on through the seventies, Supergirl remained a pretty popular character.  Readers got to watch her grow up – her high school exploits, her attempts at careers, romances, and many costume changes.  I don’t know that there’s another comic book superhero out there that we can say this about. And through the decades, Supergirl took on the culture and vibe of the times. 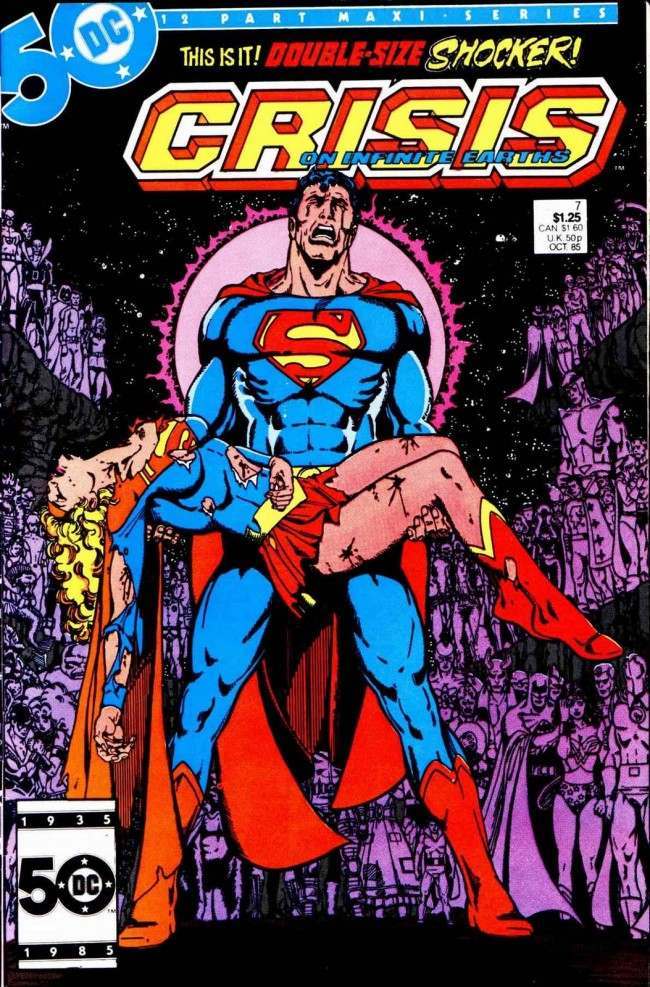 Then in the mid-eighties DC effed everything up.  The created a storyline that was impossible to follow, made it so Supergirl NEVER EXISTED, and just created a giant confusing clusterf**k called “Crisis of the Infinite Earths”.  Supergirl didn’t just die, she never even lived.

Since then, there have been various attempts to revive Supergirl, and some of them good, some not so much.  At one point she was protoplasm that took human form and at another point she was an angel with fiery wings. Suffice it to say, things got derailed and haven’t been the same since.

But let’s focus on the positive, and Kara Zor-El had a lot of “positive” things to offer young fellas in the 1960s and 70s…

Supergirl was exactly what young readers nearly stroking out on puberty were after. Granted, Supergirl was by no means the first to capitalize on the hormonal appeal of comic books (i.e. you may recall the “Lois Lane, Slave Girl” comic)   Unlike today, however, a lot of the action was laid between the lines. 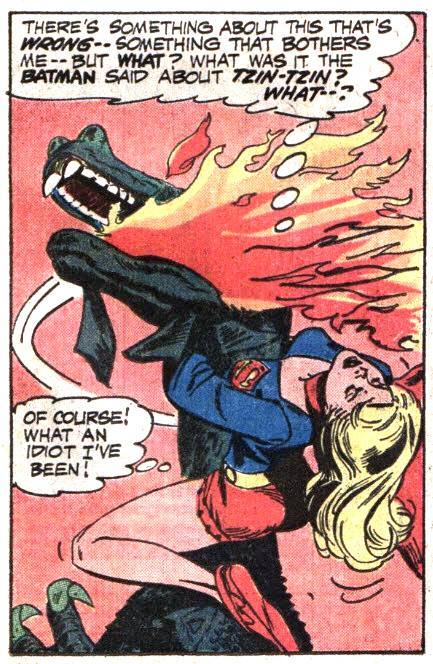 Around 2006, they created the infamous “jailbait costume” for Supergirl, leaving very little to the imagination.  However, back in the day, they had to be a tad more subtle – but the point was driven home nonetheless: Supergirl was serious ogling material for young lads. 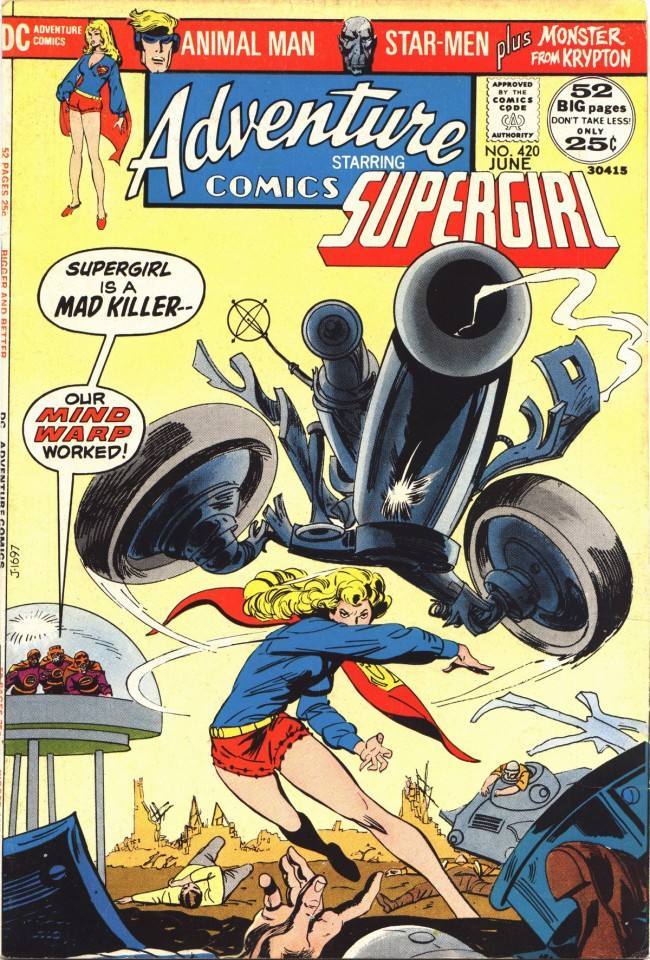 I dare you to sit there with a straight face and tell me you don’t see anything sexual in the cover above.  If you don’t see a giant phallus complete with testes and ejaculate, then you may need to get a grown up to explain it to you. 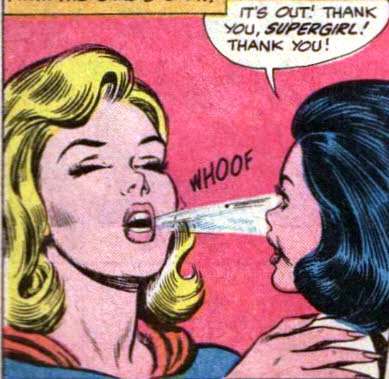 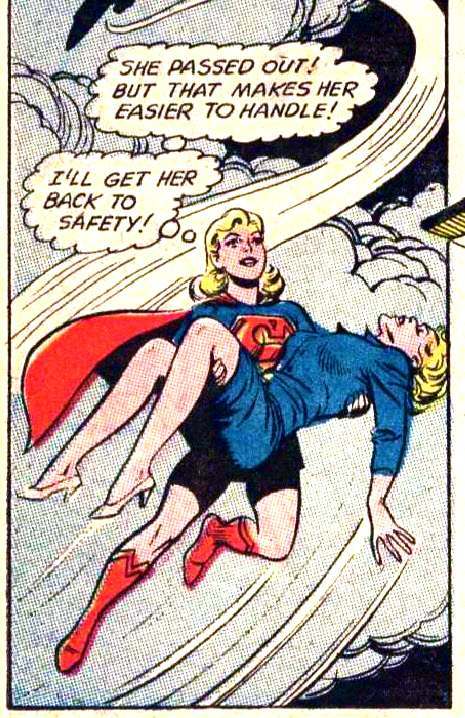 Yes, she’ll be easier to handle now, Supergirl.  Do with her what you will.  A nation of junior high-schoolers waits in eager anticipation for what happens next. 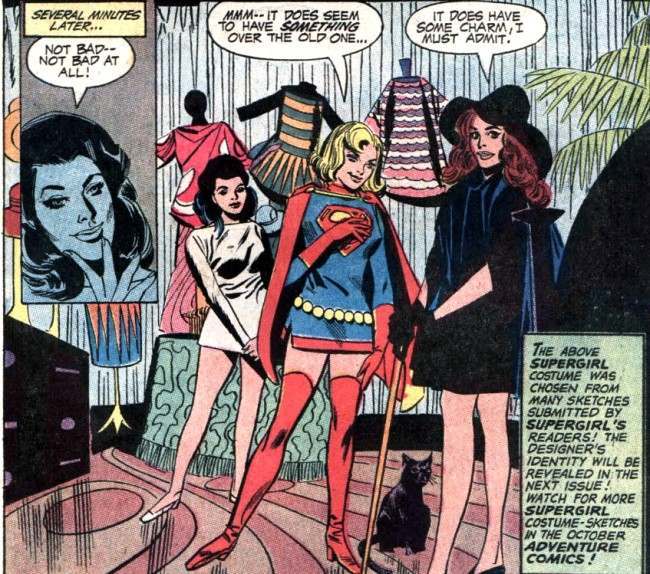 Sure, she could bend steel with her bare hands, but she also could dress better than Betty and Veronica combined.  Supergirl not only varied her super costume, but also strutted the fashions of the day as Linda Lee Danvers.  Anyone wanting to do a thesis on popular fashions during the sixties and seventies may as well start with Supergirl.

And let’s face it, the Supergirl suit was a win-win situation.  The girls loved it for the “dress your Barbie” aspect, and the boys loved it because….. because…. ummmm... 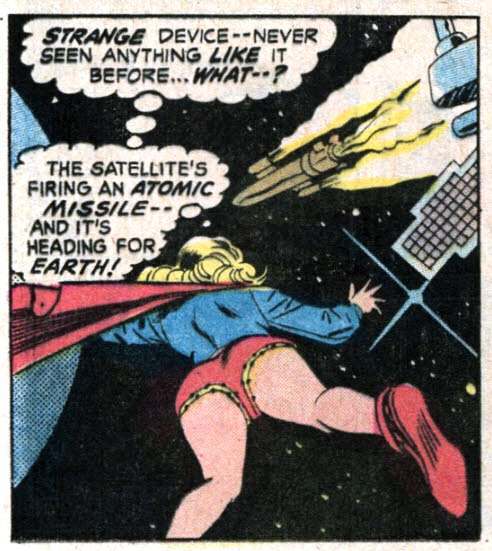 Yeah, you guessed it.  The boys couldn’t get enough of the many angles of Supergirl in her skimpy outfits.  Sure, it’s just a crummy two dimensional line drawing – but we’re talking about boys hitting puberty here. 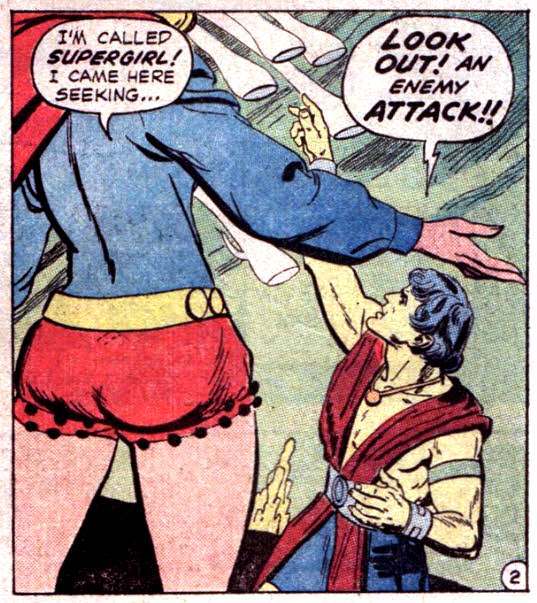 Of all the possible views and perspectives, this is what the artist chose…. a close-up of her ass.  Jesus, her head is not even in the frame, and the “enemy attack” is almost pointless compared to the very detailed and shaded Super Booty! 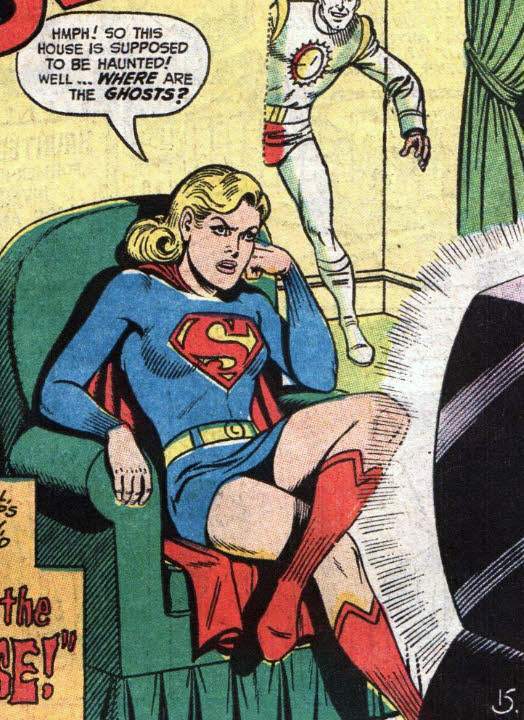 Then there was the micro-miniskirt which left many a reader squinting to get a look for what lied underneath.  Things got awfully close.  DC artists toyed with their depraved pre-pubescent audiences.  But no cigar… only the shadow knows. 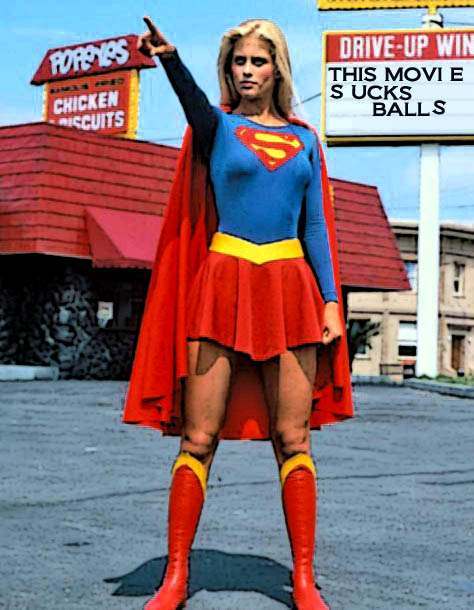 The Supergirl movie had everything going for it: a fairly big budget, a pretty young star, big name celebs, and, most importantly, plenty of hype surrounding the Superman movies.  The promise of Supergirl being a financial success was so great, Helen Slater was offered a three movie deal…. there was no way this was going to fail!

But it sucked. It sucked hard.

Christopher Reeve wisely backed out of this flop.  As awesome as Slater looked in her Supergirl duds, it wasn’t enough to save it.  The plot was a convoluted mess (something about an omegahedron), and Peter O’Toole plays his role like he’s Puck in A Midsummer Night’s Dream….. take it down a notch, Pete.

And while the movie sucked, the XTC song was brilliant, and the perfect way to end.