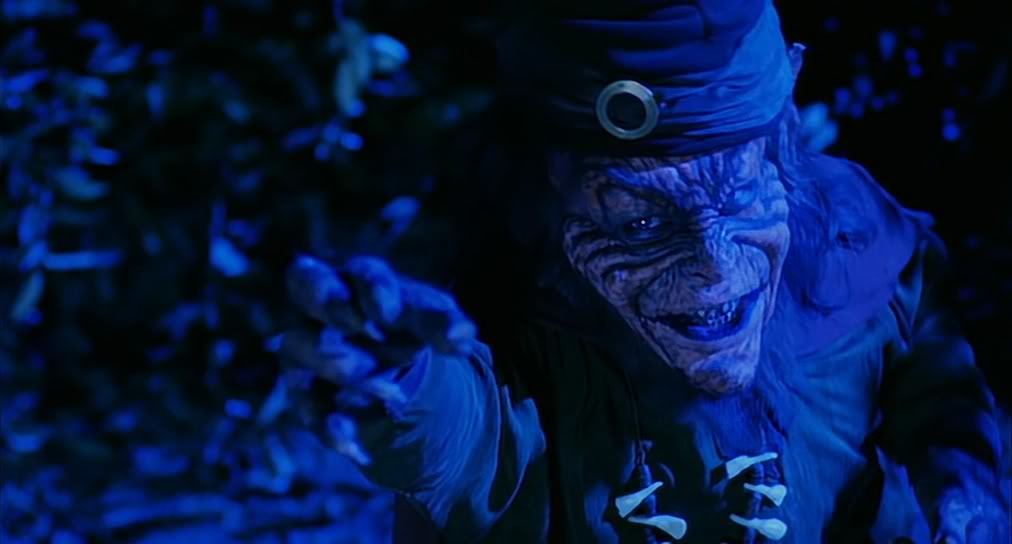 The 1960s gave the world the remarkable beginning chapter of a great horror franchise, George A. Romero’s Night of the Living Dead (1968).

Alas, the 1990s didn’t succeed nearly as well in terms of crafting horror series that could go the distance. 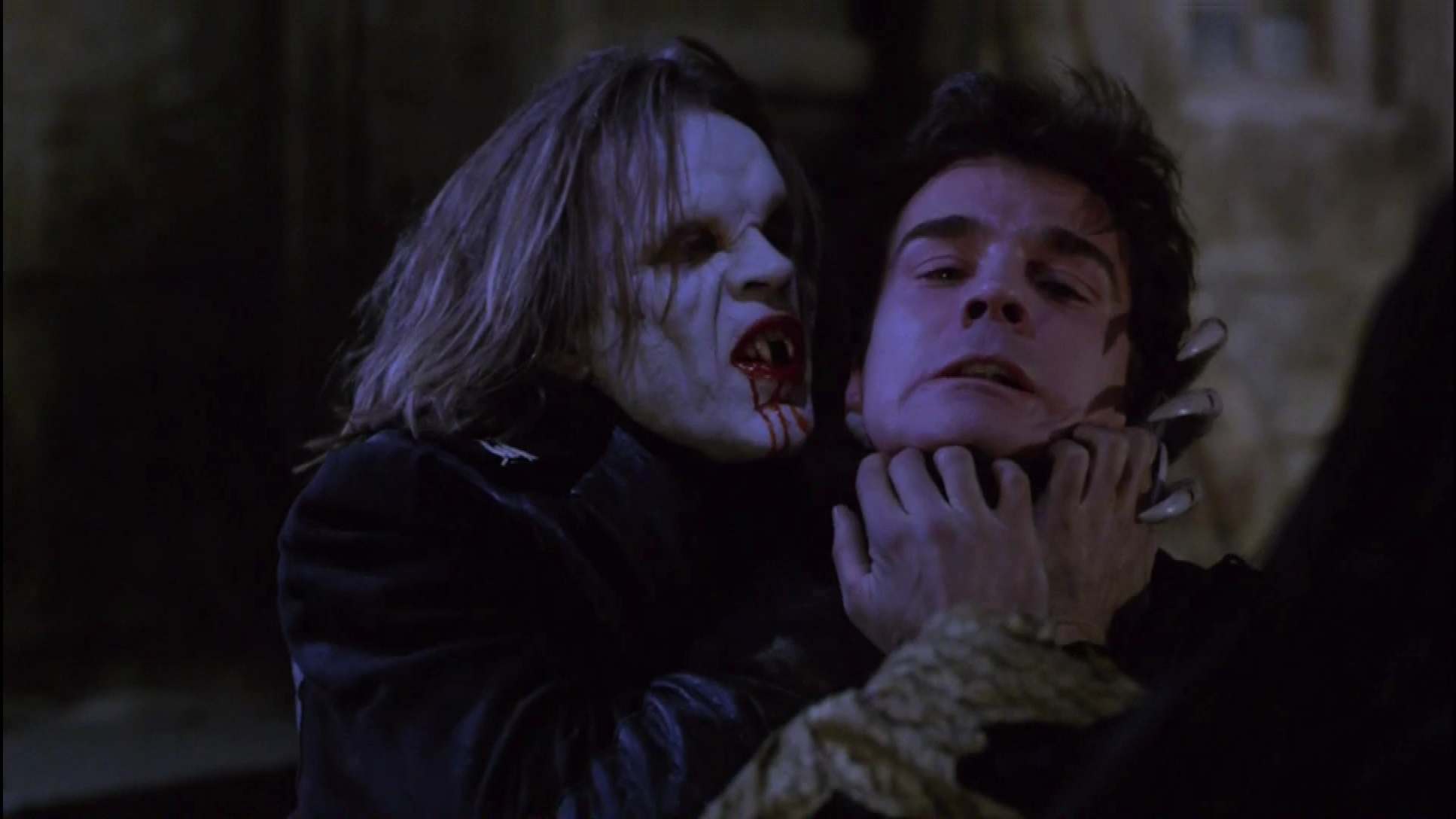 Although Wes Craven’s Scream (1996) initiated a respectable series, other franchises of the era were, generally…pretty lame. Some started strong (like Candyman [1992]) started strong and ended in disgrace.  Some never achieved escape velocity.

With that thought in mind, here are the five lamest horror movie franchises of the 1990s:

Seven movies make for quite a long-running franchise. Indeed, this run would represent quite the accomplishment were it not for the fact that there is not even one good horror film in the mix.  Every single film is awful, including the original, which consists, broadly speaking, of Jennifer Aniston being chased around by a leprechaun in a dusty front yard somewhere in Southern California.

In the sequels, the same Leprechaun (Warwick Davis) has sought a bride, visited a Las Vegas casino (or rather, a low-budget approximation of one….), traveled to deep space, and even been re-booted.

And in all that action, there is hardly a good scare — even a cheap jump scare — to enliven the storytelling.

Generally, franchises begin on the basis of a strong first production. Not so with Leprechaun, a horror franchise with the luck of the Irish. It started terrible, went on being terrible, and was re-booted as something utterly terrible too.

The motto of this horror enterprise should be: “when you absolutely can’t rent (or stream) A Friday the 13th, Halloween or Nightmare on Elm Street movie there’s always…Leprechaun.”

The central character in the series is a long-haired vampire named Radu (Anders Hove) who wants to possess an artifact that looks like Italian ice pop: the blood stone.

In terms of appearance, Radu isn’t particularly impressive, either.  For one thing, he has over-sized Mickey Mouse hands.  For another, he’s a sloppy eater. In virtually every scene featuring the character, he’s seen spontaneously drooling blood.

The original film in the franchise also has the distinction of featuring dignified Angus Scrimm in a bad fright-wig that makes him look like a kindly old granny.

Children of the Corn

The 1990s sequels to 1984’s Children of the Corn are — in addition to being completely terrible — totally inconsistent in terms of overall story.  Each sequel is a one-off that relates only to the eighties original, not the slapdash follow-ups

In Children of the Corn IV: The Gathering (1996), a medical student (A pre– The Ring [2002] Naomi Watts) returns home to Nebraska before discovering that all the children are overcome with a strange fever.

In Fields of Terror (1998), the fifth Children of the Corn movie, a group of teens encounter the cult of Divinity Fields, which worships He Who Walks Behind the Rows, and is ruled by the evil cult leader, Luke…played by David Carradine.

In 1999, another entry arrived, Children of the Corn 666: Isaac’s Return, and involved yet another return to Gatlin, location of the first film, where the original cult leader, Isaac (John Franklin) awakens from a coma.

The series changes premises, stars, and even genre sub-types so often that the viewer risks whiplash, or at least perpetual irritation.

In total fairness, the original 1995 film, The Fear, isn’t terrible.  It’s not great, but it’s not Subspecies or Leprechaun level bad either.

In in the film, psychology students face their fear by talking to a life-sized wooden doll, built by Indians, and named Morty.  One interlude in the film features a creepy Christmas village, and Morty himself comes to life, quite creepily, at points.

But the 1999 sequel, The Fear: Halloween Night, is a total disaster.

Morty the doll is back, but he no longer looks like a doll.  Instead, he is a heavy-set man in a bad, rubbery suit.  The editing is so rotten that Morty’s eyes open and close at random from shot-to-shot, ostensibly because the actor inside the suit is blinking.  An inn one weird but hysterically funny moment, Morty bursts into a bedroom while a young couple is having sex, and underwear miraculously appears on one of the participants.

Fat Morty and instantly materializing protective underwear! What else did you need to know?

The first of the bunch is Amityville 1992: It’s About Time, which concerns a haunted clock from the infamous haunted house as it attacks the Sterling family, led by Jacob (Stephen Macht).  The mysterious clock can bend time and space to its arbitrary will, making it impossible to believe that anyone could ever defeat the thing.  At one point, the clock even paints graffiti on the walls of the family house. It also ages, and de-ages various characters.

Was the former owner of the Amityville house a Time Lord?

In Amityville: A New Generation (1993), the clock was gone, but an evil mirror from the house is sold to an aspiring photographer, and begins murdering the tenant of his apartment.

And in the equally lackluster Amityville: Dollhouse (1997) another haunted antique is featured.  You guessed it: a little girl’s dollhouse.

This list could go on, for certain.  The Critters franchise descended to rottenness in the 1990s, and the Species, Wishmaster, X-tro, and 976-Evil films also went from being promising to maddening.