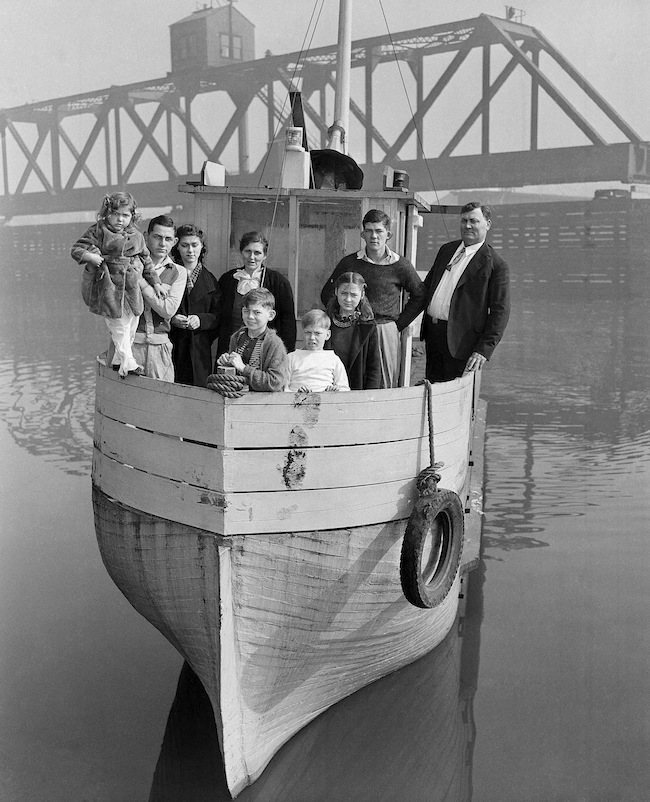 IN pre-war Great Depression-hit America, Paul Satko and his family set about transforming their car into a boat. They would drive and sail to a brighter future future in Alaska. The problem was they lived in Virginia and were too poor to pay air fares.

Photo: The Satko family, late of Richmond, Va., now of Tacoma, Wash., aboard their weird-looking craft, The Ark, in which they plan to leave on a two-months voyage to Alaska on March 24, 1940. Paul Satko, jobless machinist-welder, who built the craft and hauled it across country on a trailer, is at the extreme right. The rest of the sea-going Satkos–who will serve as the crew–minus two boys in Virginia are, left to right: Betty, 4; Edward, 17; Hazel, 18; Mrs. Satko; David, 9; William, 7; Grace, 11; and Joe, 15. 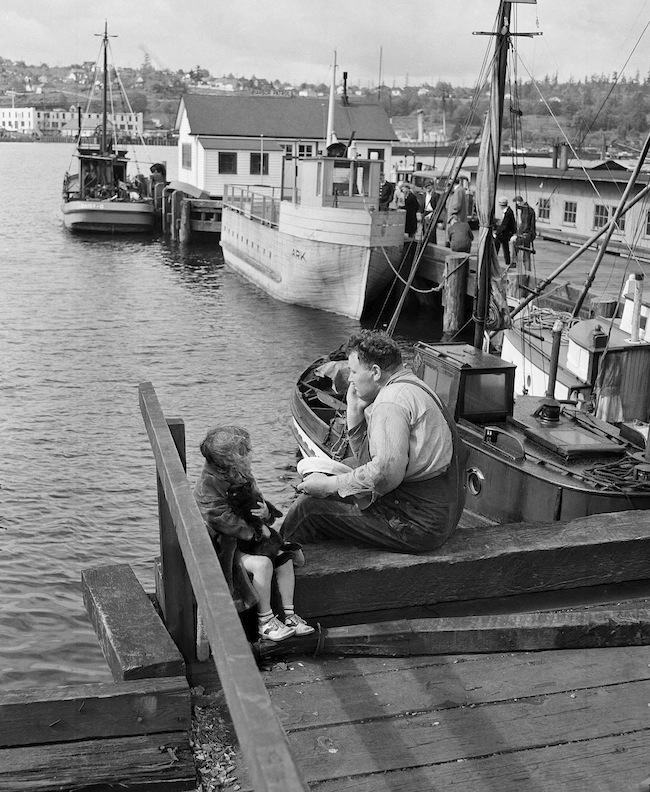 Photo: Paul Satko’s home-made Ark (background) was tied up at Seattle on April 27, 1940, awaiting a court order on its seaworthiness for an Alaska trip, but Satko and daughter Betty, 4, still day-dreamed of their long-planned northland voyage. Spectators are viewing the Ark.

Daniel Strohl takes up the story:

In 1934, Paul Satko lost his job as a welder and machinist in Richmond, Virginia. Like many other Americans at the time, for months he searched for a job to support his wife, Mollie, and their several children, only to come home in vain. Unlike many other Americans at the time, he refused to accept relief or government handouts to the unemployed. Instead, he heard of a government program offering 40-acre plots in Matanuska Valley in the territory of Alaska and apparently decided that he, his wife and two of their oldest children could combine four lots to create a vast 160-acre farm. Getting there, however, would be another story altogether.

Satko, a Marine Corps veteran who had sailed to China, the Philippines and Hawaii, decided to build himself a boat. However, rather than sail it out of an East Coast port and then on to Alaska, Satko decided to haul it across the country and then launch it from a West Coast port. Basing it on a truck chassis with the rear wheels still attached, he welded the steel frame of the nine-foot-tall, 40-foot-long boat together in Richmond, gathering whatever scrap materials he could find. To tow the boat, he used another truck chassis, stripped to the framerails and re-powered by a 1926 Buick engine – at most a 75hp, 275-cu.in. overhead-valve six-cylinder. In early 1938, he, Mollie, and seven of their nine children then set out from Richmond to Tacoma, Washington, attracting attention the whole way and earning the boat a nickname, the “Ark of Juneau.”

The journey across America took 81 days. The family based themselves in Tacoma for a year to make ready. In mid-April 1940, the bright yellow-painted Ark set sail:

The initial voyage only lasted a few days, curtailed when Satko ran aground on a sandbar at Magnolia Bluff outside Seattle. After the Coast Guard towed the Ark into port, a fellow sailor, Captain John Fox, executive secretary of the Master, Mates and Pilots’ Union, filed a complaint with the county requesting that the children be removed from the boat for their own safety. “This thing has passed beyond the stage of a joke,” Captain Fox told the Associated Press. “(The Ark) hasn’t enough power for the Alaskan trip. this was demonstrated when it was unable to make headway in a fresh breeze and moved sidewise. She would be a menace to navigation. Pilots would have to be on the alert for her constantly.” A judge agreed, and police removed six of the seven children from the boat, arresting Satko in the process for trying to prevent the police from serving the court order.

He shortly after posted bail, thanks to the help of some friendly Tacoma residents, and set about altering the Ark as the judge requested while the rest of the family – ordered to remain off the Ark – stayed in an apartment in Seattle. Yet a month later, with the alterations incomplete, Satko set sail for Everett, Washington, where he met up with the rest of his family, driven up by supporters who wanted to see them on their way. After a brief stop in Anacortes, Washington, where the Coast Guard refused to allow the Ark to continue, the Satkos left under the cover of darkness to make it to Canadian waters before the Coast Guard could catch up to them. Two months later, they made it to Juneau and eventually homesteaded in the area, though they were never able to obtain the 40-acre plots that set them on their journey. 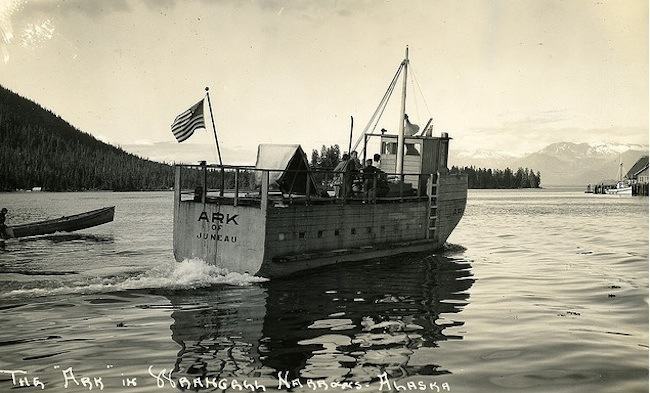 Juneau Empire tells us what happened next:

The Ark finally reached Juneau on July 26, 1940. Shortly after the family arrived, a daughter, North Sea, was born on the Ark.

The Ark was beached on Eagle Landing and the Satkos obtained a homestead between Herbert River and Eagle River. The family lived on the Ark while Satko and the older children built a cabin on their homestead. The family developed a large garden and sold produce in Juneau. The products were sold to the public and some were sold wholesale to George Brothers’ Grocery Store.

However, the U.S. Department of the Interior would not give Satko a title to his homestead because he failed to file for the title within the prescribed time.

In 1946, after the war was over, Paul and Mollie, along with their children, returned to Virginia. Hazel (Mrs. Bill Brown), Joe and Grace (Mrs. Tom Connolly), remained in Juneau. The Ark became a victim of time and the weather, and only parts of the steel keel remain. Paul Satko died of a heart attack in 1957 at the age of 66. Mollie died in Washington in 1995, just a few days before her 92nd birthday. Only Joe of the original settlers remains in Juneau. 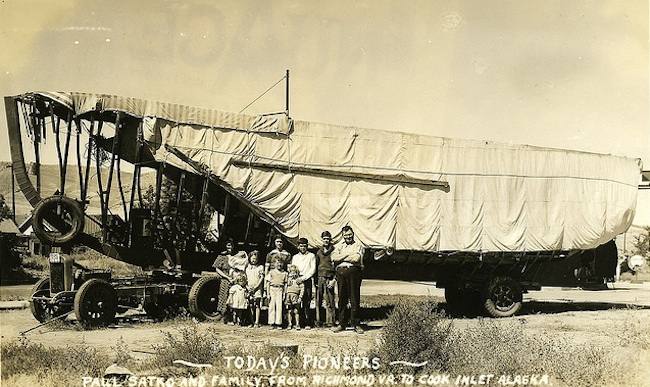