In 1974 the Reverend David A. Noebel put  own in words his thought on The Beatles. These thoughts were deep enough to form an entire book, The Marxist Minstrels: A Handbook on Communist Subversion of Music.

Who is Rev. Noebel? We turn to the back of the book:

Rev. David Noebel, Associate Evangelist of Billy James Hargis and Dean of the Christian Anti-Communist Summer University, The Summit, Manitou Springs, Colorado, is the author of this excellent study. When Dr. Hargis discovered Rev. Noebel and recognized his leadership ability, the author of this book was pastor of a Bible Church in Madison, Wisconsin, where he was also working on his Doctorate of Philosophy at the University of Wisconsin. Rev. Noebel enthusiastically joined Dr. Hargis’s team and has become a leading spokesman for Christian Crusade in recent months. 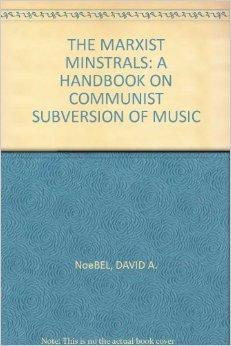 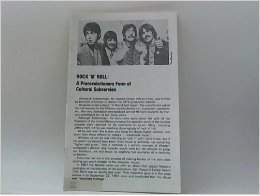 These followed other works, like the 1966 panic reader Rhythm Riots and Revolution and 1969’s The Beatles: A Study in Drugs, Sex and Revolution. The artwork on this is fabulous. 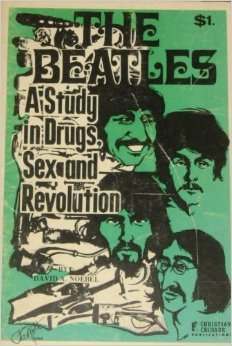 But Communism, Hypnotism, and The Beatles is hard to beat. In it we learn:

“And, since our teenagers under Beatlemania will actually riot, it is imperative to understand the basic underlying philosophy of the Beatles. Are they susceptible to the enemies of our Republic?”

The subtitle to his insight is “Analysis of the Communist Use of Music – the Master Plan”. 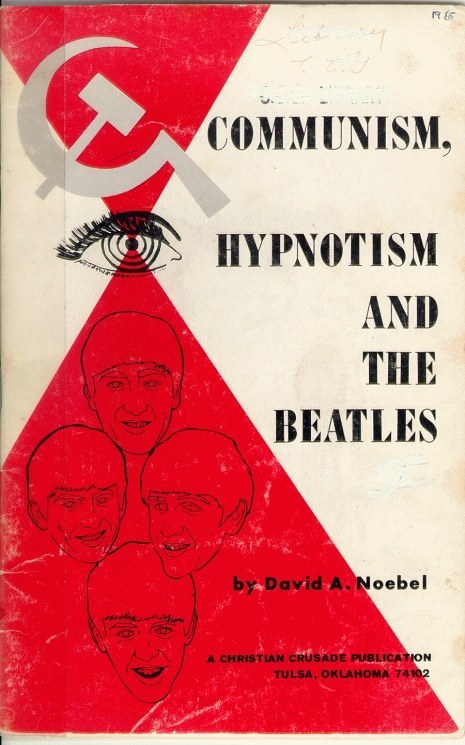 You see, rock ‘n’ roll is making your Communists and gay. Pop is “un-Christian, mentally unsettling, revolutionary and a medium for promiscuity”.

And that’s why we love it! 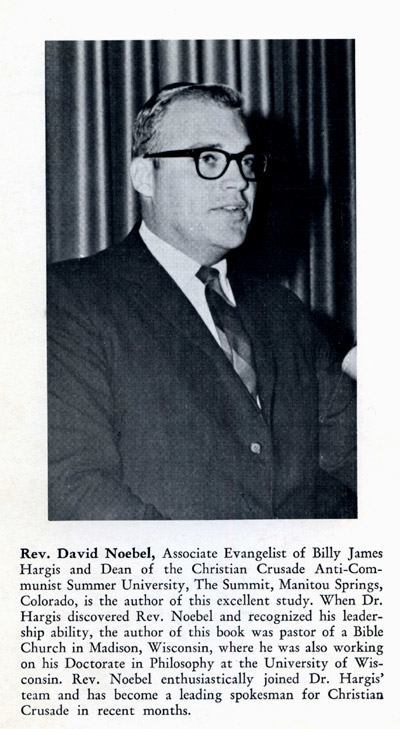 In 1965 Newsweek covered Noebel in an article called Beware The Red Beatles:

Fluoridation, mental-health programs, and the United Nations are, as every Right-thinking fundamentalist well knows, insidious Communist plots to soften up America for the Bolshevik takeover. But by dint of ‘hard intelligence’, a 28-year-old Wisconsin preacher, on tour for Billy Hargis’s Christian Crusade says he has unearthed a more subtle Communist ploy -the Beatles.

“In the excitatory state that the Beatles place these youngsters into, these young people will do anything they are told to do . . . One day when the revolution is ripe,’ the minister warns in dark, apocalyptic tones, ‘they [the communists] could put the Beatles on TV and [they] could mass hypnotize the American youth. This scares the wits out of me.”

The Communists, through their scientists, educators and entertainers, have contrived an elaborate, calculating and scientific technique directed at rendering a generation of American youth useless through nerve-jamming, mental deterioration and retardation. The plan involves conditioned reflexes, hypnotism and certain kinds of music. The results, destined to destroy our nation, are precise and exacting. Little wonder the Kremlin maintains it will not raise the Red flag over America—the Americans will raise it themselves. If the following scientific program destined to make our children mentally sick is not exposed, mentally degenerated Americans will indeed raise the Communist flag over their own nation!

Noebel had science to support his theories:

Pavlov experimented with animals in other areas as well, for example, in an area known as artificial neurosis. Here the scientist took healthy animals and using two conditioned reflexes, the excitatory reflex and the inhibitory reflex, caused these healthy animals to break down mentally with cases of artificial neurosis. As we shall see, this is exactly what the Beatles, in particular, and rock and roll, in general, are doing to our teenagers’.

Former rock player, Bob Larson, in conjunction with a physician, offers some light on the relationship between hard rock and promiscuous sex. He contends that the low frequency vibrations of the bass guitar, coupled with the driving beat of the drum, have a decided effect upon the cerebralspinal fluid. The fluid in turn affects the pituitary gland which directs the secretion of hormones, resulting in an abnormal balance of primarily the sex and adrenalin hormones. Instead of their normal regulatory function in the body, these hormones secreted under such conditions produce radical changes in the blood sugar and calcium of the body. Since the brain is nourished exclusively by blood sugar, it ceases to function properly, causing moral inhibitions to either drop to a dangerous low or be wiped out altogether.

But The Beatles as Communists… Really?

But our younger children are not the only ones being tampered with by the Communists. Our teenager is also being exploited. Exploited for at least three reasons: (a) his own demoralization; (b) to create in him mental illness through artificial neurosis and (c) to prepare him for riot and ultimate revolution in order to destroy our American form of government and the basic Christian principles governing our way of life.

Four young men, noted for their tonsils and tonsure, are helping to bring about the above. When the Beatles conducted their “concert” in Vancouver, British Columbia, 100 persons were stomped, gouged, elbowed and otherwise assaulted during a 29-minute performance.

Nearly 1,000 were injured in Melbourne, Australia; in Beirut, Lebanon, fire hoses were needed to disperse hysterical fans. In the grip of Beatle fever, we are told the teenagers weep, wail and experience ecstasy-ridden hysteria that has to be seen to be believed. Also, we are told teenagers “bite their lips until they bleed and they even get over-excited and take off their clothes.” To understand what rock and roll in general and the Beatles in particular are doing to our teenagers, it is necessary to return to Pavlov’s laboratory. The Beatles’ ability to make teenagers take off their clothes and riot is laboratory tested and approved. It is scientifically labeled mass hypnosis and artificial neurosis.

And not just The Beatles:

The music isn’t “art-form” at all, but a very destructive process. Teenage mental breakdown is at an all time high and juvenile delinquency is nearly destroying our society. Both are caused in part by emotional instability which in turn is caused in part by destructive music such as rock and roll and certain kinds of jazz. But no matter what one might think about the Beatles or the Animals or the Mindbenders, the results are the same—a generation of young people with sick minds, loose morals and little desire or ability to defend themselves from those who would bury them.

The Beatles’ public pronouncements, in the main, could not please this socialist-communist coterie more and, therefore, although the Beatles might not fully understand all the ramifications of their usefulness, they have been considered more than acceptable by the Left. Hence, rock’n’roll in general and the Beatles in particular have a special significance to the disrupters of society for their promotion of drugs, avant-garde sex and atheism. The revolu- tion, though sometimes veiled, is fundamentally against Christianity and Christianity’s moral concepts. Karl Marx sought to dethrone God before he set out to destroy capitalism.

Since the rebellion or revolution not only sustains, but feeds on the sexual revolution, it is quite natural that the revolutionaries are against morality and Biblical Christianity which impedes the sexual revolution . . . There is good reason, therefore, why the Red revolution- ists who are dedicated to attacking Christianity and the morals of Christianity look to the Beatles as their ‘cultural heroes’. Of course, to the naive and uninitiated, the Beatles simply appear as four, fine, wholesome, uplifting musicians, but to those who peer at the clenched fisted, radical revolutionists on our college campuses (and their useful idiots), the Beatles take on a vastly different hue and tone.

In conclusion, it seems rather evident to this writer that the communists have a master music plan for all age brackets of American youth. We know from documented proof that such is the case for babies, one- and two-year-olds with their rhythmic music; we know such is the case for school children with their rhythmic music and for university students with their folk music.4 What but rock and roll fits the teenager? This isn’t saying that the communists have invented rock and roll or any other type of music, but they do in fact know how to use each type for their own purpose

.Throw your Beatle and rock and roll records in the city dump. We have been unashamed of being labeled a Christian nation; let’s make sure four mop-headed anti-Christ beatniks don’t destroy our children’s emotional and mental stability and ultimately destroy our nation as Plato warned in his Republic.

He wasn’t alone. When John Lennon me his quip about Jesus being smaller than The Beatles, records were torched. “Christianity will go,” said Lennon. “It will vanish and shrink. I needn’t argue about that; I’m right and I will be proved right. We’re more popular than Jesus now; I don’t know which will go first — rock ‘n’ roll or Christianity. Jesus was all right but his disciples were thick and ordinary. It’s them twisting it that ruins it for me.”

Noebel retuned The Fab Four with his screed The Legacy of John Lennon: Charming or Harming a Generation?. In 2006, Noebel wrote that these “pied-pipers from Liverpool led tens of thousands straight into the drug culture and sexual revolution. Indeed, Lennon’s gospel was a gospel of freedom without God, moral boundaries or adult responsibility. His mantra of ‘give peace a chance’ was merely a cloak to cover his drug-drenched lifestyle, promiscuity (free love) and Marxist/socialist revolution.”

Such are the facts…