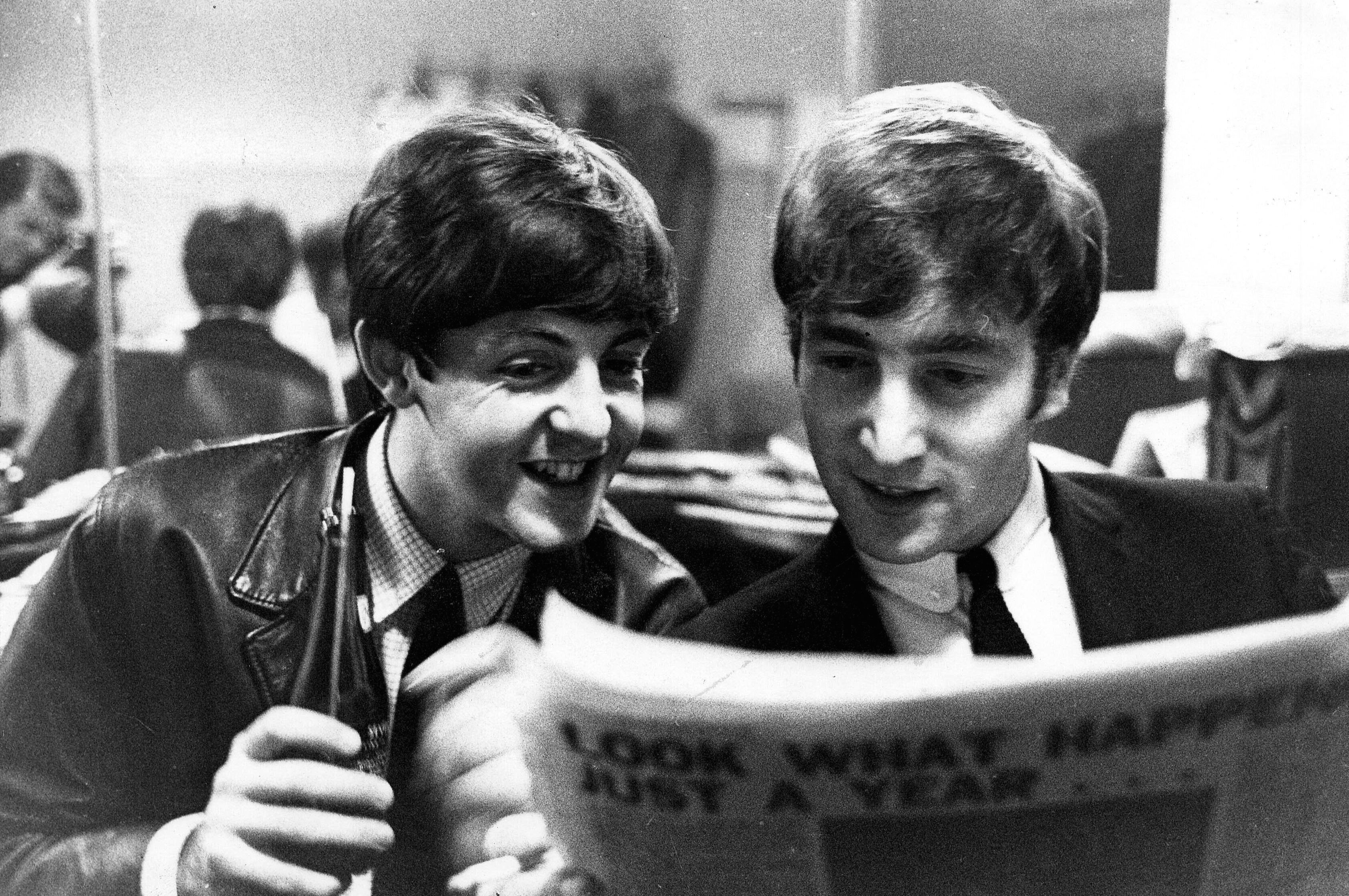 In 1971, John Lennon wrote to Paul and Linda McCartney. Lennon’s response was triggered by a letter from Linda in which she had admonished Lennon for not openly announcing his departure from The Beatles. Paul was suffering. “I hit the bottle,” he admitted. “I hit the substances.” The letter is not an uplifting read. 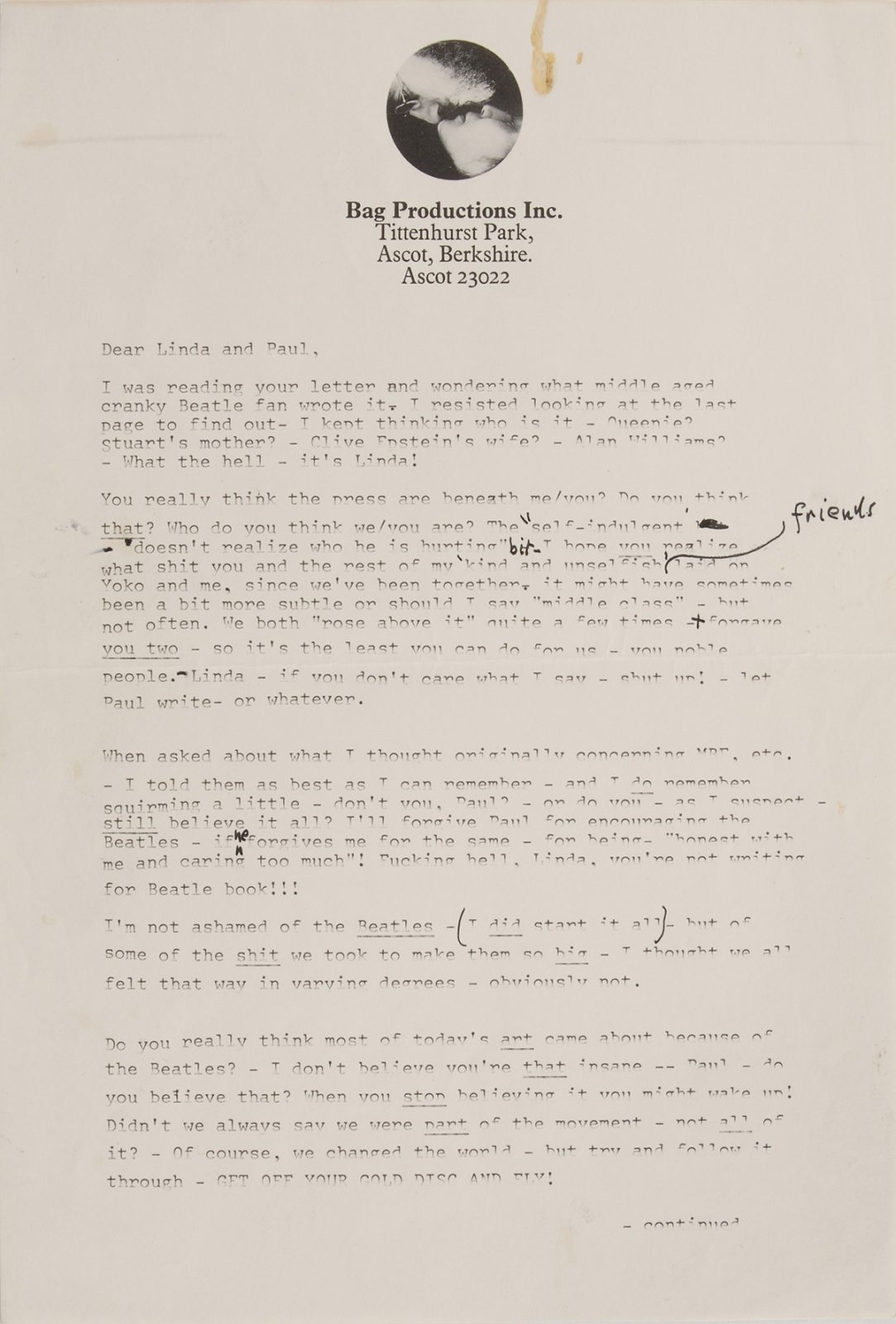 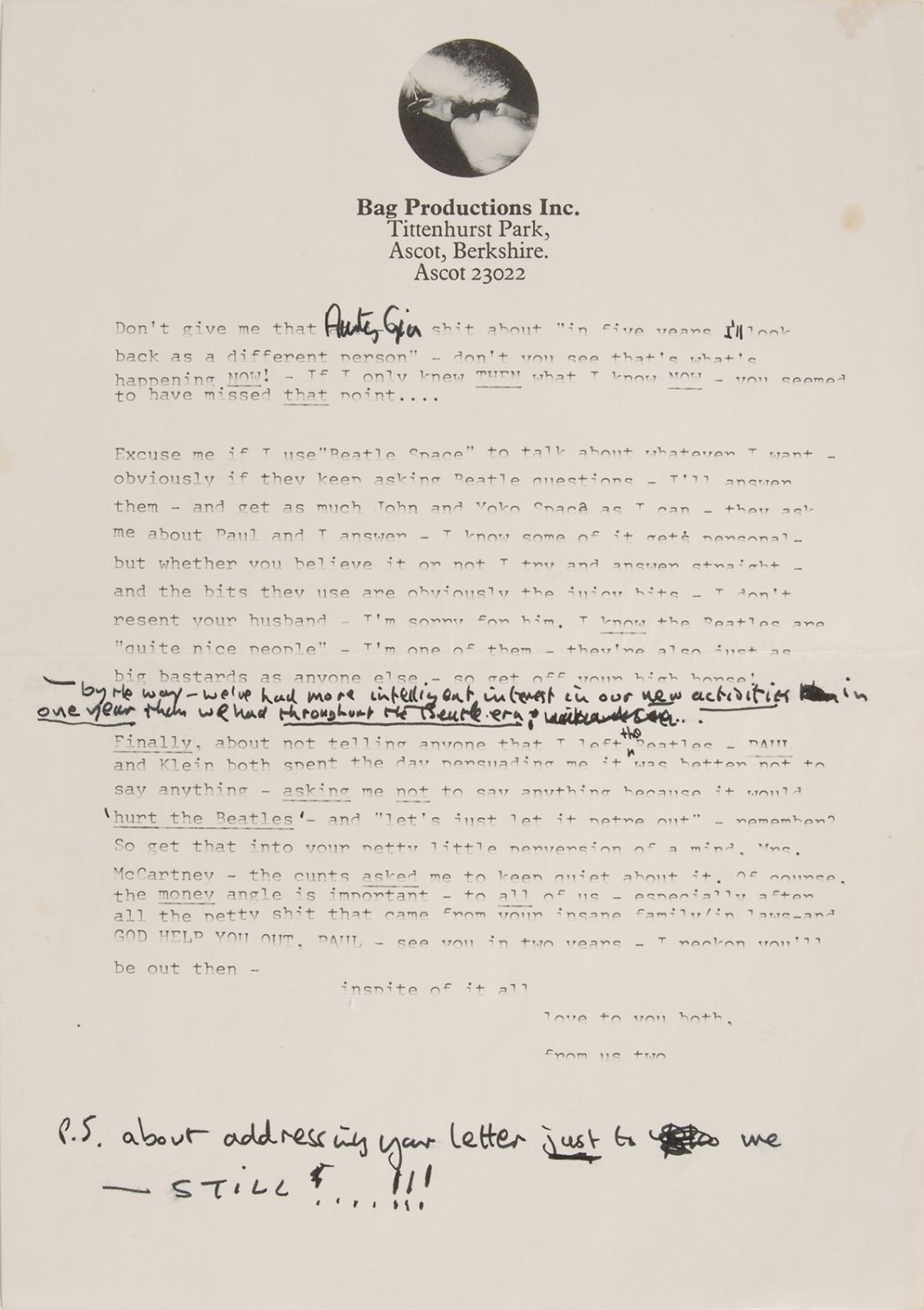 I was reading your letter and wondering what middle aged cranky Beatle fan wrote it. I resisted looking at the last page to find out -I kept thinking who is it – Queenie? Stuart’s mother?—Clive Epstein’s wife?—Alan Williams?—What the hell—it’s Linda!

You really think the press are beneath me/you? Do you think that? Who do you think we/you are? The ‘self-indulgent doesn’t realize who he is hurting’ bit—I hope you realize what shit you and the rest of my ‘kind and unselfish’ friends laid on Yoko and me, since we’ve been together. It might have sometimes been a bit more subtle or should I say ‘middle class’—but not often. We both ‘rose above it’ quite a few times—& forgave you two—so it’s the least you can do for us—you noble people.—Linda—if you don’t care what I say—shut up!—let Paul write—or whatever.

When asked about what I thought originally concerning MBE, etc.—I told them as best as I can remember—and I do remember squirming a little—don’t you, Paul?—or do you—as I suspect—still believe it all? I’ll forgive Paul for encouraging the Beatles—if he forgives me for the same—for being—‘honest with me and caring too much’! Fucking hell, Linda, you’re not writing for Beatle book!!!

I’m not ashamed of the Beatles—(I did start it all)—but of some of the shit we took to make them so big—I thought we all felt that way in varying degrees—obviously not.

Do you really think most of today’s art came about because of the Beatles?—I don’t believe you’re that insane—Paul—do you believe that? When you stop believing it you might wake up! Didn’t we always say we were part of the movement—not all of it?—Of course, we changed the world—but try and follow it through—GET OFF YOUR GOLD DISC AND FLY!

Don’t give me that Aunty Gin shit about ‘in five years I’ll look back as a different person’—don’t you see that’s what’s happening NOW!—If I only knew THEN what I know NOW—you seemed to have missed that point….

Excuse me if I use ‘Beatle Space’ to talk about whatever I want—obviously if they keep asking Beatle questions—I’ll answer them—and get as much John and Yoko Space as I can—they ask me about Paul and I answer—I know some of it gets personal—but whether you believe it or not I try and answer straight—and the bits they use are obviously the juicy bits—I don’t resent your husband—I’m sorry for him. I know the Beatles are ‘quite nice people’—I’m one of them—they’re also just as big bastards as anyone else—so get off your high horse!—by the way—we’ve had more intelligent interest in our new activities in one year than we had throughout the Beatle era.

Finally, about not telling anyone that I left the Beatles—PAUL and Klein both spent the day persuading me it was better not to say anything—asking me not to say anything because it would ‘hurt the Beatles’—and ‘let’s just let it petre out’—remember? So get that into your petty little perversion of a mind, Mrs. McCartney—the cunts asked me to keep quiet about it. Of course, the money angle is important—to all of us—especially after all the petty shit that came from your insane family/in laws—and GOD HELP YOU OUT, PAUL—see you in two years—I reckon you’ll be out then—in spite of it all, love to you both, from us two.

P.S. about addressing your letter just to me—STILL….!!!