This cracking edition from the golden age of top shelf magazines also features an interview with Salvador Dali. 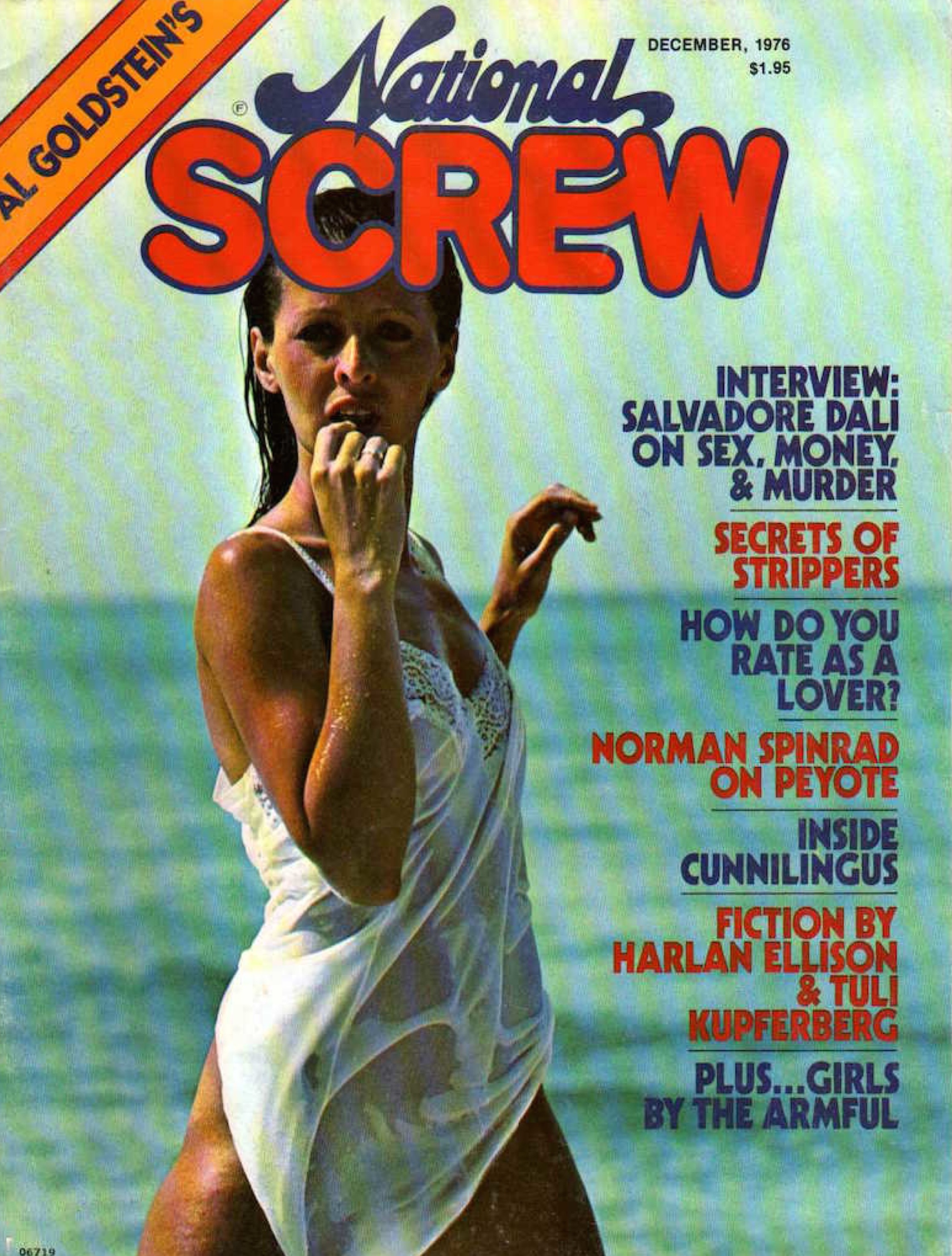 “Success may fill the day with dreamlike dame and fortune, but does it help anyone to sleep better?” To find out, Jeff Goldberg made the calls. 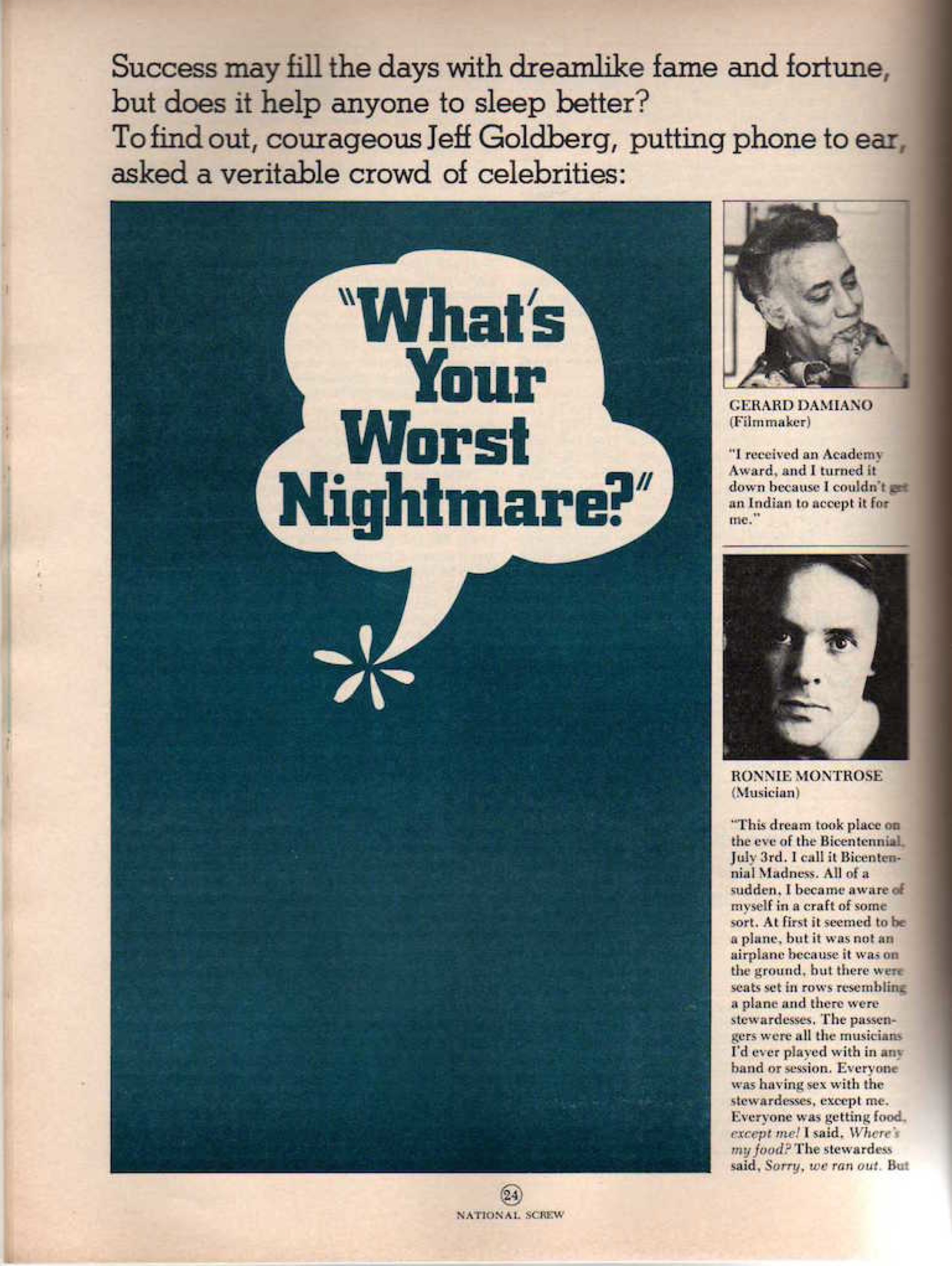 “I received and Academy Award and I turned it down because I couldn’t get an Indian to accept it for me.” – Gerard Damiano

“This dream took place on the eve of the Bicentennial, July 3. I call it Bicentennial Madness. All of a sudden I became aware of myself in a craft of some sort. At first I thought it was a plane but it was not an airplane because it was on the ground but there were seats seats in rows resembling a plane and there were stewardesses. And the passengers were all the musicians I’ve ever played with in any band or session. Everyone was having sex with the stewardess, except me. Everyone was getting food, except me. I said ‘Where’s my food?’ The stewardess said, ‘Sorry, we ran out.’ But no one asked me if I wanted any. I got up and left the craft and had to descend into a basement to reach the street. I found myself surrounded by tall buildings and I had a feeling of foreboding. The buildings seems to be teetering. I looked up and straight ahead of me I saw a smooth, round hill. There were bleachers built into the slopes and on top of the hill was an auto transport truck five stories tall, filled with brand new, shiny American cars.  There were fireworks in the air and red, white and blue klieg lights lighting the truck from behind. Suddenly a Roman Candle was shot into the air and when it burst it produced the entire Declaration of Independence. I became aware of the bleachers again, filled with people in Let’s Make a Deal costumes. They were standing and waving at these men positioned at the base of the hill who were firing rockets towards the bleachers. The men were in white asbestos outfits. The game was being hit by the rockets. When one of the contestants was hit, the men in white suits would rush up and put the winner on a stretcher and load the damaged person into the new car he’d won. The winners were very happy.” –  Ronnie Montrose 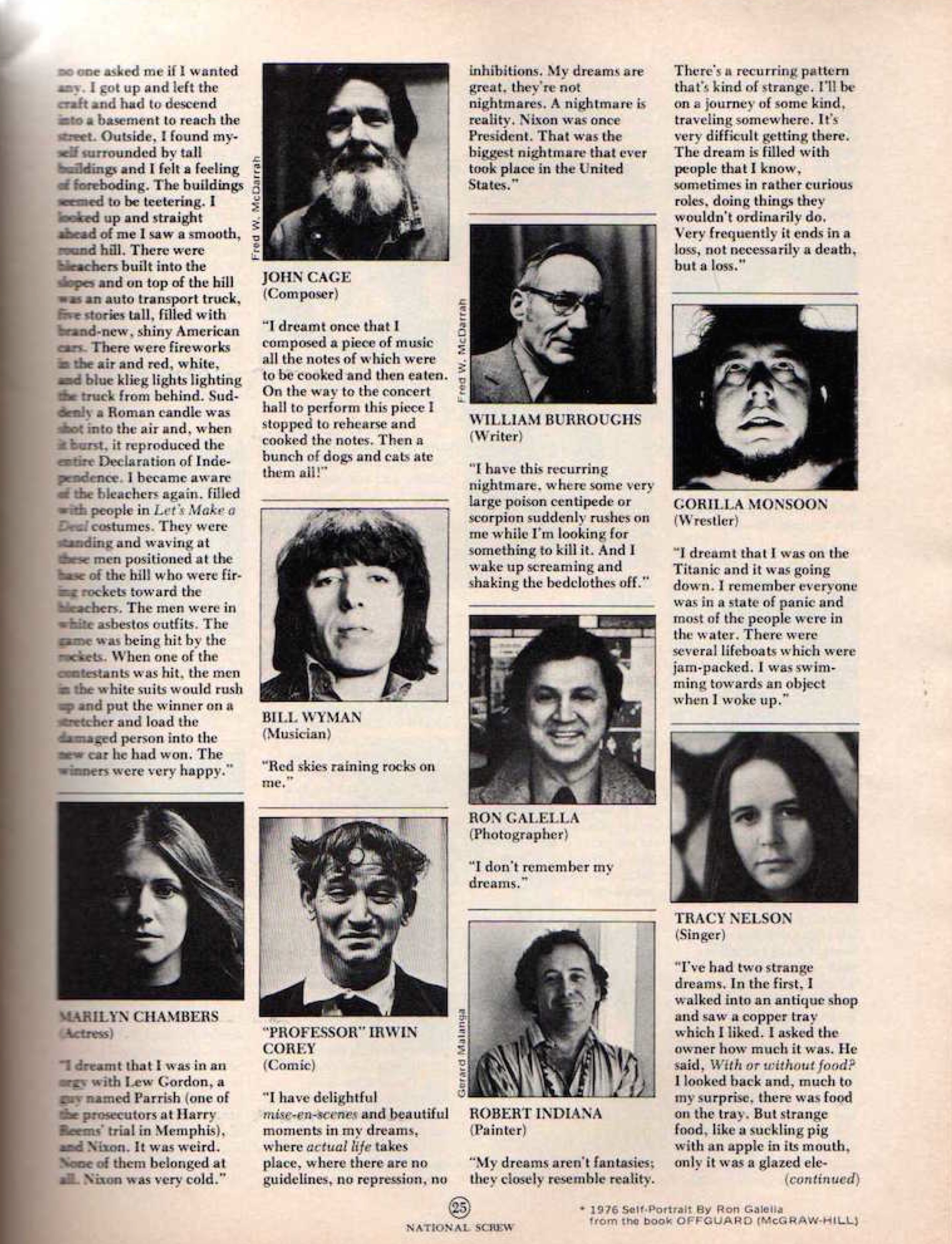 “I dreamt once that I composed a piece of music, all the notes of which were to be cooked and then eaten. On the way to the concert hall to perform the piece I stopped to rehearse and cooked the notes. Then a bunch of dogs and cats ate them all!” – John Cage

“I have delightful mise-en-scène and beautiful moments in my dreams where actual life takes place, where there are no guidelines, no repression, no inhibitions. My dreams are great, they’re not nightmares. A nightmare is reality. Nixon was once President. That was the biggest nightmare that ever took place in the United States” – ‘Professor’ Irwin Corey.

“I have this recurring nightmare where some very large poison centipede or scorpion suddenly rushes on me while I’m looking for something to kill it. And I wake up screaming and shaking the bedclothes off” – William Burroughs

“My dreams aren’t fantasies; they closely resemble reality. There’s a recurring patten that’s kind of strange. I’ll be on a journey of some kind travelling somewhere. It’s very difficult getting there. The dream is filled with people that I know, sometimes in rather curious roles, doing thing they wouldn’t ordinarily do. Very frequently it ends in a loss, not necessarily a death, but a loss.” – Robert Indiana

“I dreamt that I was on the Titanic and it was going down. I remember everyone was in a state of panic and most of the people were in the water. There were several lifeboats, which were jam-packed. I was swimming towards an object, when I work up.” – Gorilla Monsson 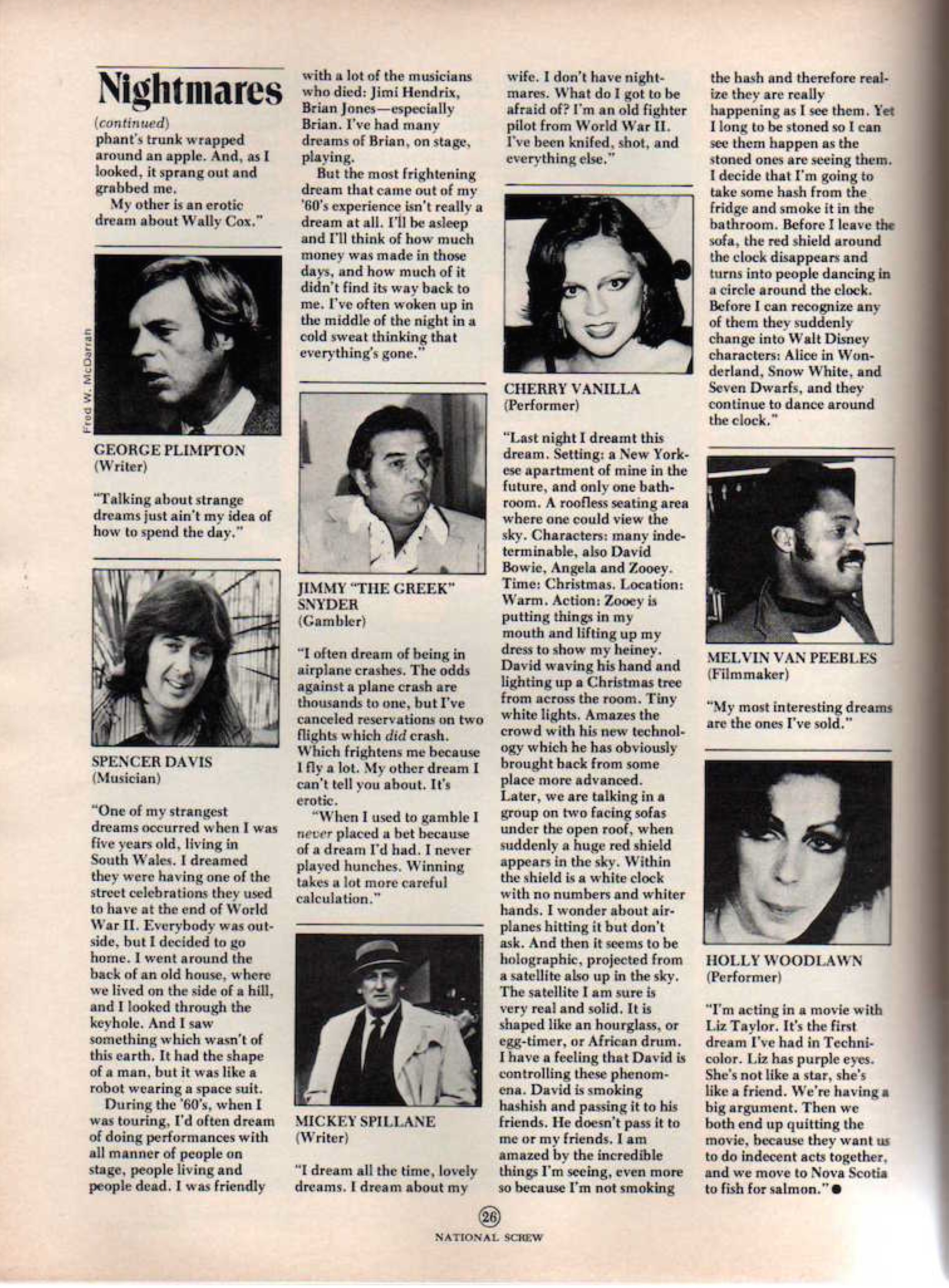 “Talking about stranger dreams just ain’t my idea how to spend the day.” – George Plimpton

“One of my strangest dm occurred when I was five years old, living in South Wales, I dreamed they were having one of the street celebration they used to have at the end of World War 2. Everybody was outside, but I decided to go home. I went round the back of an old house, where we lived on the side of a hill, and I looked though the keyhole. And I saw something which wasn’t of this earth. It had the shape of a man, but it was like a robot wearing a space suit. During the 60s, when I was touring, I’d often dream of doing performances with all manner of people on stage, people living and people dead. I was friendly with a lot of the musicians who died: Jimi Hendrix, Brian Jones – especially Brian. I’ve had many dreams of Brian, on stage, playing.

“But the most frightening dream that came out of my 60s experiences isn’t really a dream at all. I’ll be asleep and I’ll think of how much money was made in those days, and how much of it didn’t find it way back to me. I’ve often woken up in the middle of the night in a cold sweat thinking everything’s gone.” – Spencer Davis

“I dream all the time, lovely dreams. I dream about my wife. I don’t have nightmares. What do I got to be afraid of? I’m an old fighter pilot from World War 2. I’ve been knifed, shot and everything else.” – Mickey Spillane

“Last night I dreamed this dream. Setting: a New York apartment of mine in the future, and only one bathroom. A roofless seating area where one could view the sky. Characters: many indeterminable, also David Bowie, Angela and Zooey. Time: Christmas. Location: Warm. Action: Zooey is putting things in my mouth and lifting up my dress to show my heiney. David waving his hand and lighting up a Christmas tree from across the room. Tiny white lights. Amazes the crowd with his new technology which he has obviously brought back from some place more advanced. Later, we are talking in a group on two facing sofas under the open roof, when suddenly a huge red shield appear in the sky. Within the shield is a white clock with no numbers and whiter hands. I wonder about airplanes hitting it but don’t ask. And then it seems to be halographic, projected from a satellite also up in the sky. The satellite I am sure is very real and very solid. It is shaped like an hourglass, or egg-timer, or African drum. I have a feeling that David is controlling these phenomena. David is smoking hashish and passing it to his friends. He doesn’t pass it to me or my friends. I am amazed by the incredible things I’m seeing, even more so because I’m not smoking the hash and therefore realise they are really happening as I see them. Yet I long to be stoned so I can see them happen as the stoned ones are seeing them. I decide that I’m going to take some hash from the fridge and smoke it in the bathroom. Before I leave the sofa, the red shield around the clock disappears and turns into people dancing in a circle around the clock. Before I can recognize any of them they change into Walt Disney characters: Alice in Wonderland, Snow White and the Seven Dwarves; and they continue to dance around the clock.” – Cherry Vanilla

“My most interesting dreams are the ones I’ve sold.” – Melvin Van Peebles

“I’m acting in a movie with Liz Taylor. It’s the first dream I’ve had in Technicolor. Liz has purple eyes. She’s not like a star. She’s like a friend. We’re having a big argument. Then we both end up quitting the movie, because they want us to do indecent acts together, and we move to Nova Scotia to fish for salmon.” – Holly Woodlawn