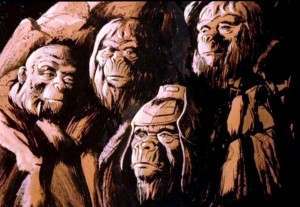 All heads of this multi-platform media hydra revolve around one central topic: future history, particularly the fall of man, and the rise of intelligent apes as Earth’s dominant species.

Uniquely – and completely in keeping with the time-travel aspect of the franchise — each branch of the Apes legacy, whether TV series, cartoon, or re-boot — seems to exist in a similar but slightly different alternate reality.  One might view this as evidence that the future can indeed be altered, but the final destiny of the planet — the fall of mankind to intelligent apes — is immutable.

With that notion in mind, enumerated below are the five most historically important simians in Planet of the Apes history.  Some of these five characters described below, you will note, play roles of extreme significance in more than one parallel reality, a fact which cements their status as focal points in the franchise and in the fate of Earth.

Unlike many of the other significant actors in the differing Ape time-lines, the Lawgiver’s role seems entirely variable depending on the era in which he is depicted. This fact could indicate that the role of Lawgiver is filled by different individuals, or that the altering of the timeline by Caesar’s arrival (via time-traveling spaceship…) somehow has changed the Lawgiver’s nature by the time that he appears in the flesh, in Battle.

For instance, the Marvel Comics adaptation of the Apes saga suggested that the title of Lawgiver was passed from generation to generation, individual to individual.  Thus the ape statue seen in Planet could be of another individual, not Huston’s character.  The films themselves, however, feature no such Lawgiver in Zaius’s Ape City, only the great historical figure seen in statue form.  This suggests that there was a great, historical Lawgiver, and not others.

In Planet of the Apes and its direct sequel, the Lawgiver is renowned as one of the key authors of the Sacred Scrolls: the Ape Version of the Holy Bible.

These scrolls enshrine bigotry and discrimination towards humans into Ape Law and Ape Religion.  Man is viewed as a pestilence and a beast, something worse than mere animal.  Ostensibly the greatest simian that ever lived, the Lawgiver loves apes but despises humans even more, and sees them only as a terrifying danger.  We can’t actually quibble with his assessment.  In this time-line, humans destroyed the Earth in a nuclear war and have reverted to barbarism.

Yet when we actually meet the Lawgiver as a living, breathing ape in the prologue and epilogue to Battle for the Planet of the Apes,he is depicted as a kind and loving teacher. He lectures gently to an (outdoor) classroom of both apes and men.  He tells them the story of Caesar and urges the species to live in peace together, in honor of Caesar’s memory and sacrifices.

Either way you cut it, the Lawgiver is a pivotal figure in future history. He is either the most anti-human Ape ever to rise to power in Ape City, or the ape that tried — and perhaps failed? — to bring ape and man to peace in the 2500s.  Whether he is an anti-man zealot or a Gandhi-like figure of peace, the Lawgiver is the key ape figure in terms of shaping the 3000s. 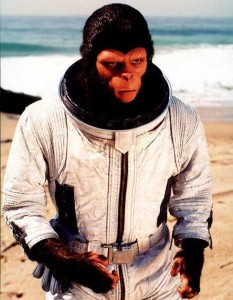 Played by Sal Mineo, and seen only briefly in 1971’s Escape from the Planet of the Apes, Dr. Milo is arguably the smartest ape — or at least the smartest chimp — who ever lived.

In the year 3958, he apparently recovers and repairs Taylor’s (Charlton Heston) spaceship, which is sunken at the bottom of a dead lake.  Milo makes the ship flight-worthy, and it escapes from Earth as the planet is destroyed in a mutant-gorilla war.  Flying the space vessel, Milo shepherds three important passengers back in time to the 1970s during this exodus: Zira (Kim Hunter), Cornelius (Roddy McDowall), and baby Caesar/Milo, still in his mother’s womb.

Without Milo’s knowledge and continuing efforts with the human-made spaceship, Caesar’s time-line in the 1970s would never have been begun.  In other words, without Milo’s intervention, there would be no Planet of the Apes, or at least not one in the shape we ultimately see take form in Escape’s sequels.  In a very real sense, Milo makes the rise of the apes in man’s world a possibility by repairing that spaceship he finds at the bottom of a lake in the late 3900s.

This militant gorilla general (played by James Gregory) wages a war of genocide against mutated humans in the Forbidden Zone in Beneath the Planet of the Apes (1970).

It is Ursus’s brutal invasion of and attack on a subterranean (ruined) New York City that brings about the end of the world in the Planet of the Apes franchise.  Had Ursus not launched his invasion, it is very likely the mutants would not have retaliated, in the process readying their Alpha-Omega Bomb.

Similarly, Ursus plays a role in detonating the Alpha-Omega Bomb itself, because he shoots his machine gun at it, and it begins to leak deadly gas.  Similarly, Ursus orders his apes to bring it down from the mutants’ altar, a fact which no doubt alters the weapon’s trajectory.  This means that (when activated by Taylor) it detonates on the ground, in New York City, very near Ape City…making the only two known civilizations on Earth essentially “ground zero” for the mother of all nuclear blasts.

Ursus has analogs in other universes or time-lines, if not exact counter-parts.  General Urko (Mark Lenard) in the Planet of the Apes TV series is just as war-mongering as Ursus is, but is held in check by Dr. Zaius, unlike his death-dealing counterpart.  And in Tim Burton’s Planet of the Apes, the chimp general Thade fulfills a similar function, launching a war to eradicate humans. 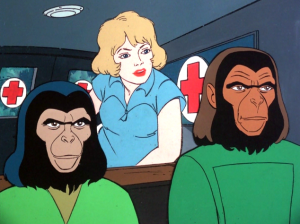 These gentle and pacifist chimps of the late 3000s are a two-fer, I suppose you could state.  Taken together, they are two of the most critical figures in ape and Earth history.   In the original films, Zira (Kim Hunter) and Cornelius (Roddy McDowall) escape Earth’s destruction and travel back in time. There, in the early 1970s, Zira gives birth to their child, Caesar, the revolutionary who leads the slave apes to freedom in Conquest of the Planet of the Apes (1972).

Later, video-recordings of Cornelius — an ape historian — reveal to Caesar the unpleasant nature of Earth’s end.  This recording sways Caesar’s thinking, and he realizes he must end the hatred between apes and men, lest Earth die.

Surprisingly, Zira and Cornelius prove just as significant in the continuity of the animated series, Return to the Planet of the Apes (1975).

In this alternate reality, the Earth is not destroyed in a war, and Zira and Cornelius befriend not George Taylor (Heston), but astronauts Judy, Jeff, Brent, and Bill.

Working with these humans, Zira and Cornelius recover a book from the 20th century: A Day at the Zoo.  The book reveals the truth that humans were once masters of the planet, and Apes were held in cages in city zoos.

As the animated series ends, Cornelius brings the book out of hiding at an ape monastery and prepares to present it to the Ape City Senate, an act which will change the nature of Ape Law, and the relationship between ape and man, forever.  In this reality, Cornelius and Zira, not their son, Caesar, is the one who begin to break down the barriers of prejudice and bigotry between species. 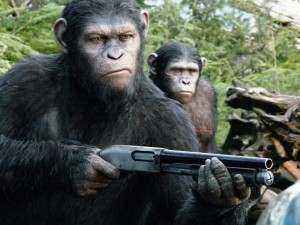 In two separate realities or timelines, Caesar is the chimpanzee revolutionary who frees his fellow apes from slavery and abuse at the hands of mankind.

In Battle for the Planet of the Apes (1973), however, Caesar emerges as a statesman (states-ape?) and a warrior for peace.  He realizes that the world will be destroyed if he does not tear down the walls of inequality between ape and man.

Again, Caesar leads an armed revolution, and stakes out a place for his kind outside human cities (in this case, Muir Woods).

Whether or not this Caesar will become a warrior for peace — or the final nail in man’s coffin — may very well be decided by the events that unfold in Dawn.

But whatever path he chooses, Caesar again proves that, even across parallel dimensions — and even with different origin stories — he is a key mover of Earth’s future history and the changing of the social order or hierarchy.