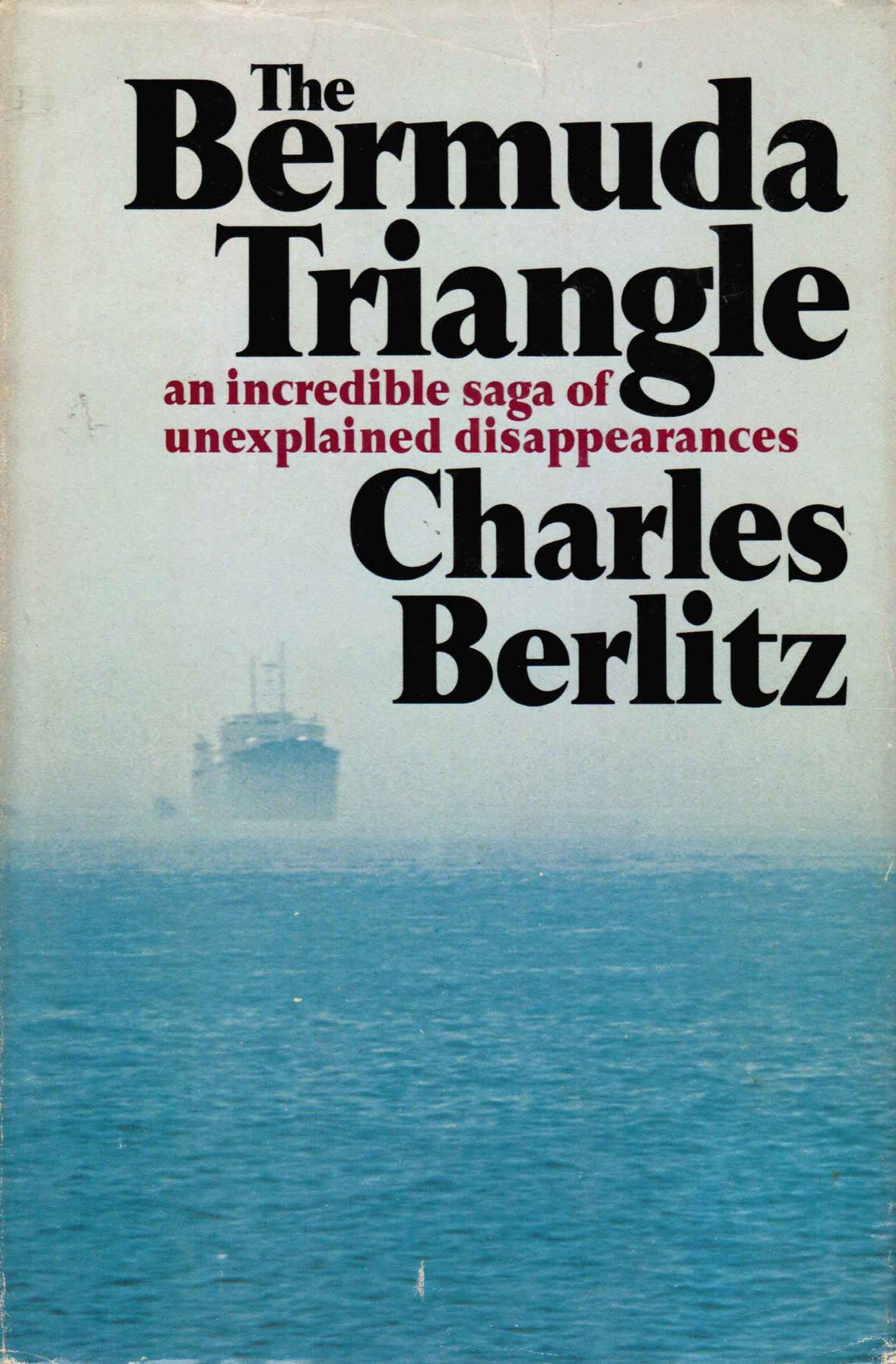 If Bigfoot or Sasquatch was the great boogeyman of the seventies, then the Bermuda Triangle (or sometimes Devil’s Triangle) was, perhaps, a close second.

The Bermuda Triangle is a region of the North Atlantic Ocean where many ships and planes have allegedly disappeared without a trace, for decades. Stories of such vanishings were actually reported as early as 1950, but it was during the seventies that pop culture’s obsession with this “cursed” area of the sea really went off the scale.

This may have been because of author Charlie Berlitz’s “bestselling saga of unexplained disappearances,” The Bermuda Triangle, which was published in 1969 and re-ignited interest in the Bermuda Triangle while selling more than twenty million copies. 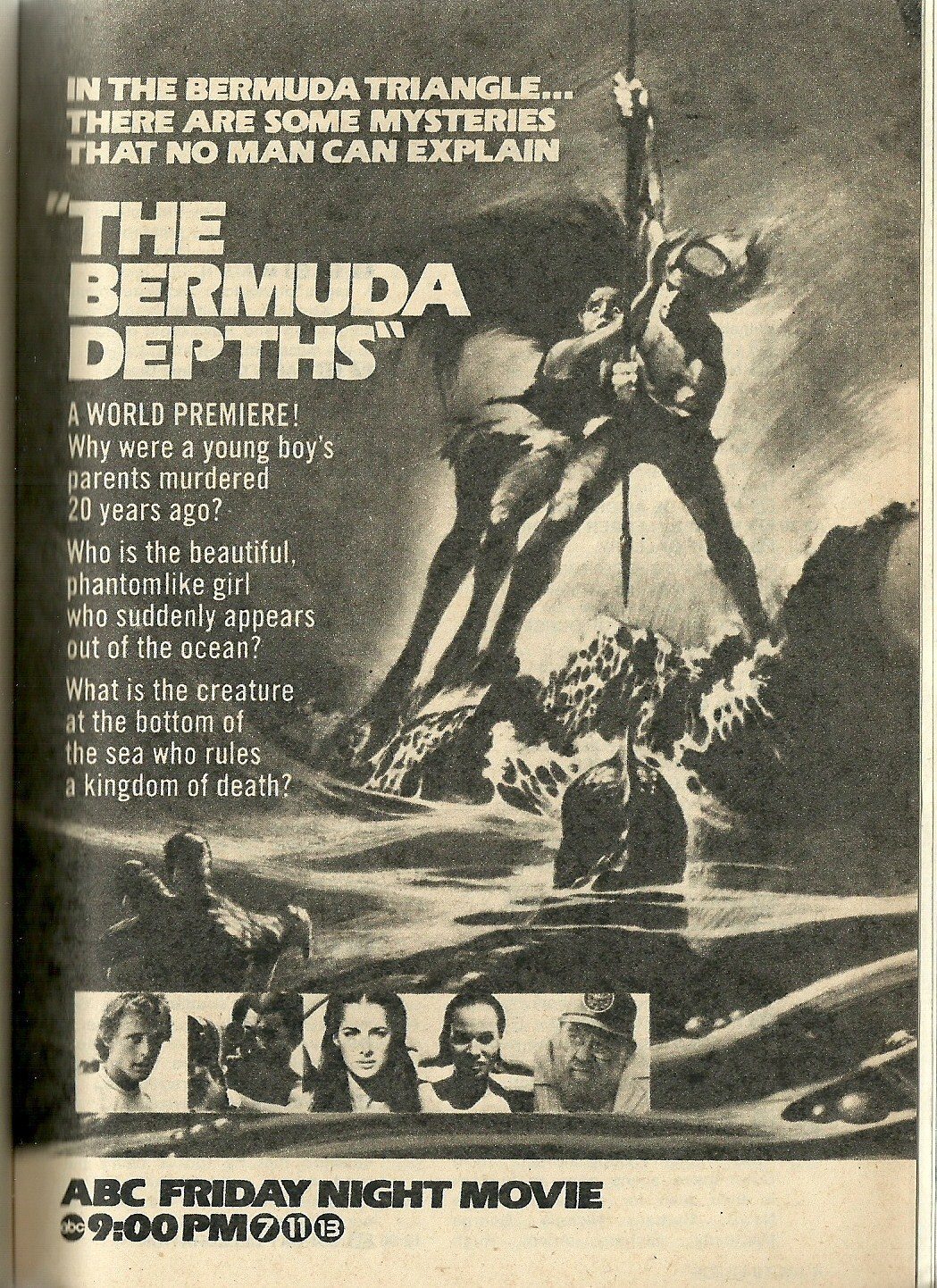 On the latter front, Lynda Carter’s Wonder Woman even got into the act with and episode titled “The Bermuda Triangle Crisis.”

Accordingly, below you will find five pop culture memories of the Bermuda Triangle Craze of the 1970s.

If you happened to see this ABC Movie of the Week on TV in early January of 1975, you may insist it is one of the most terrifying films you’ve ever seen, particularly owing to the film’s twist ending…which I won’t spoil here.

Satan’s Triangle concerns a man of science in the Coast Guard, Lt. Haig (Doug McClure) as he responds to a distress call in the Bermuda Triangle.

He boards a derelict schooner and finds strange personalities aboard, including Eva, played by Kim Novak.  Haig patiently attempts to explain the strange phenomena he finds aboard the yacht — including a man who seems to literally be floating in the air — but his explanations will fail to sway you, especially in light of the film’s unforgettable denouement.

In this Milton Bradley Game, you were challenged to take your fleet of ships across “The lime-green waters” of the Bermuda Triangle and brave the sinister “unforgiving mystery cloud” that could swallow ships and planes whole.

“Can you make it home with your cargo?” 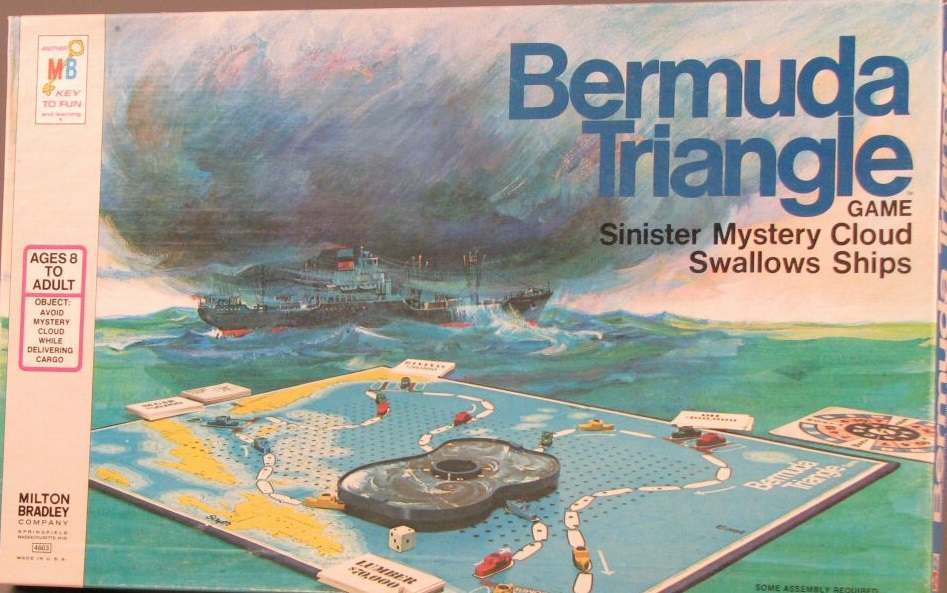 This short-lived TV series involved a ship filled with scientists that encounters a green cloud in the Bermuda Triangle.

After passing through the emerald mist, survivors wash up on a vast island where all time periods meet.  In short order, series regulars Ike Eisenmann and Carl Franklin encountered men from the 23rd century like the healer Varian (Jared Martin), the half-Atlantian sensitive Liana (Katie Saylor), and brilliant scientist Jonathan Willaway (Roddy McDowall).  These protagonists faced off against would be conquerers played by John Saxon, a pirate played by Ian McShane, and even a male-hating queen played by Joan Collins.

The fourth episode of In Search Of’s first season involved a study of this famous “triangle shaped wedge” at sea, where a “mysterious phenomenon” might exist.  Leonard Nimoy hosts the episode, which explores the history of a region where “more than one thousand lives have been lost.”

What mysteries lurk in The Bermuda Triangle?

According to this Rankin-Bass-produced TV-movie: a ghostly siren played by Connie Sellecca and a gigantic “cryptodira” sea turtle.   The Bermuda Depths features a trance-like atmosphere, a haunting love/ghost story, and a Moby Dick-styled subplot with Carl Weathers as the Captain Ahab figure.  Oh, and Burl Ives is in it too… 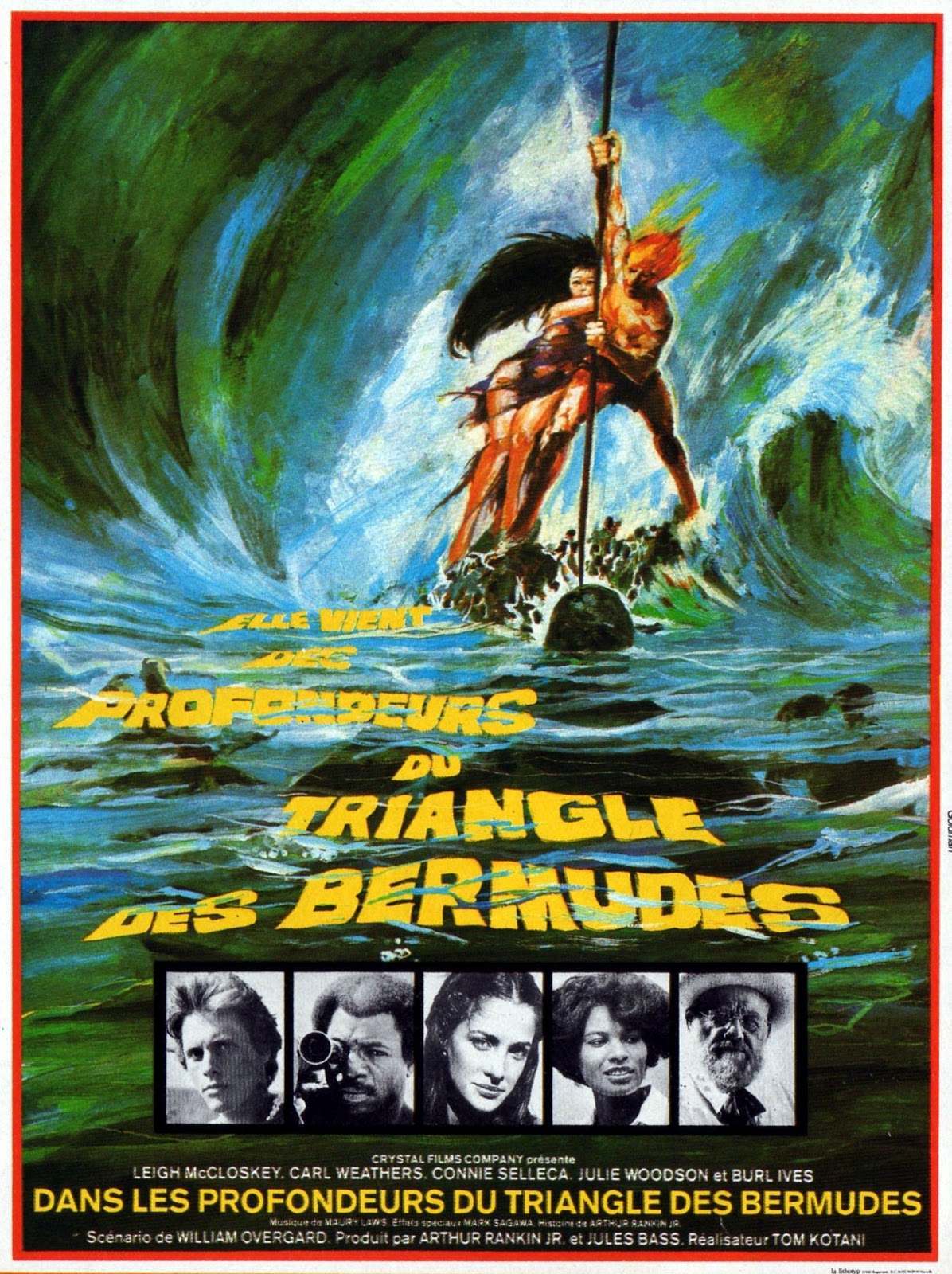 French poster for the Bermuda Depths 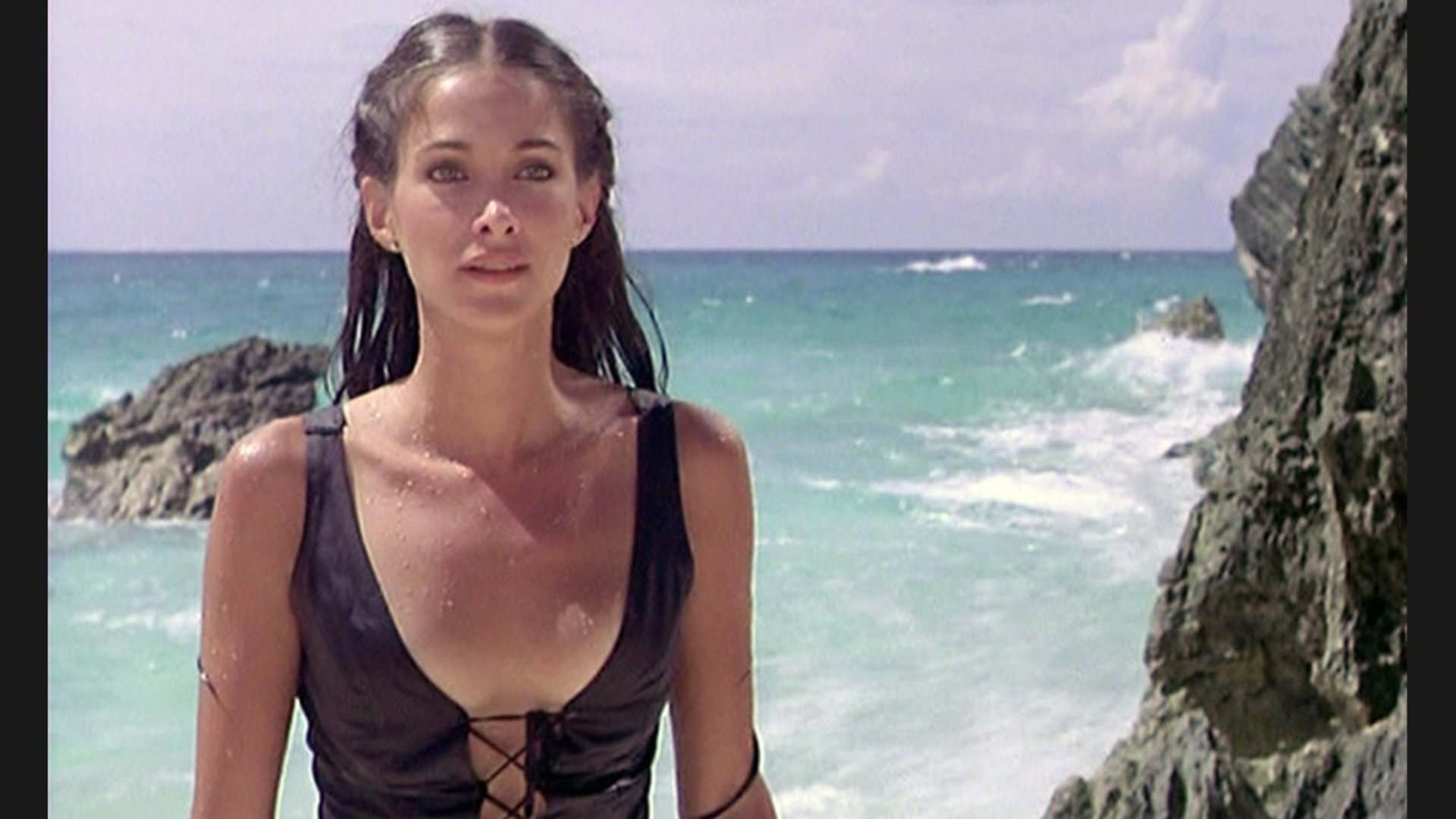