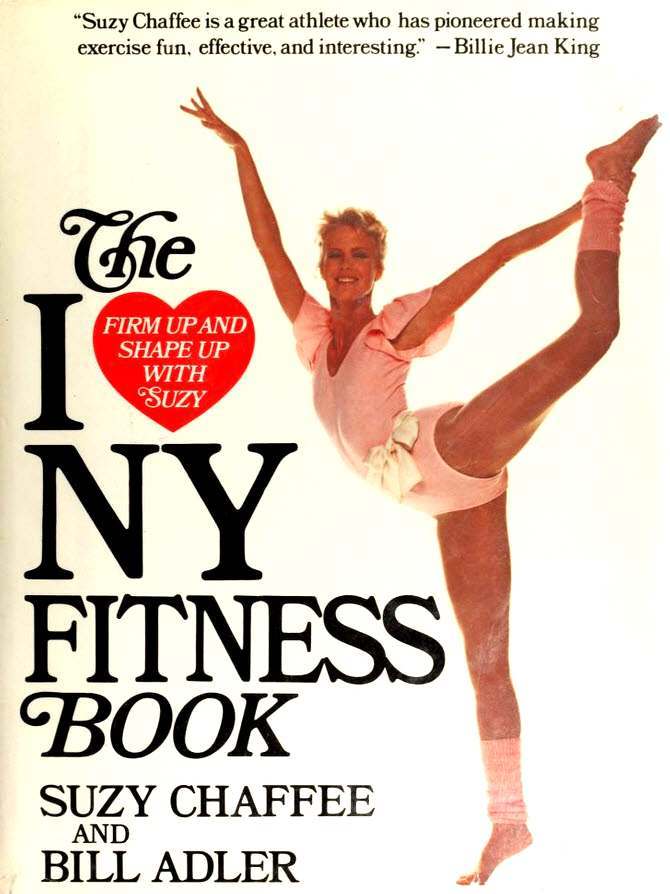 Suzy Chaffee, better known by her nickname “Suzy Chapstick”, was an Olympic athlete, political activist, and supposed midnight lover to Ted Kennedy. Her athletic accomplishments are actually pretty impressive….. her fitness book, not so much.

But before we start, a word about her co-author, Bill Adler. He was a writer for Candid Camera and wrote these classics of Western Literature: Kids’ Letters to President Carter and Letters to the Air Force on UFOs. 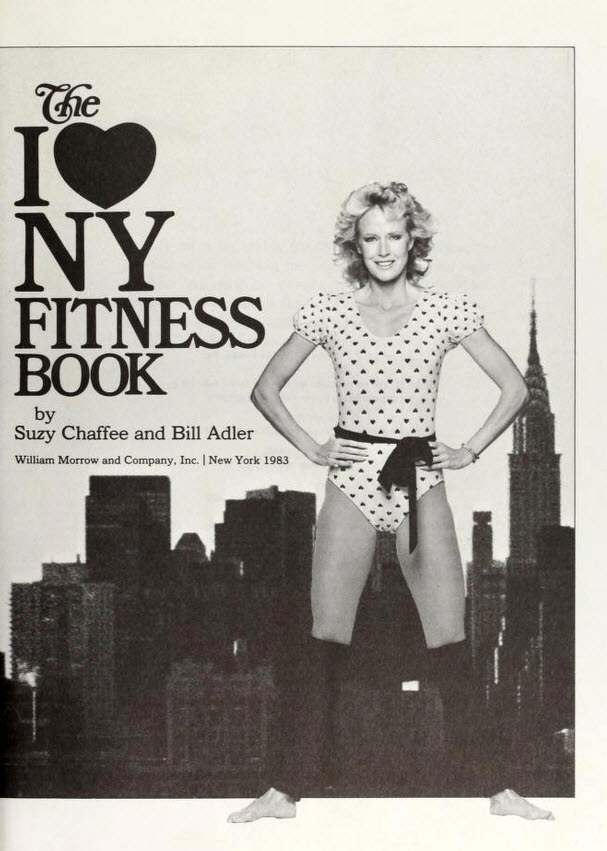 I’m actually not quite sure why it’s even called “I [Love] NY”; the exercises within have precious little to do with New York City. There was an “I [Love} NY” diet, but that still doesn’t explain things. I’ll bet if she’d called it The Suzy Chapstick Fitness Book it would’ve sold better. I’m just sayin’. 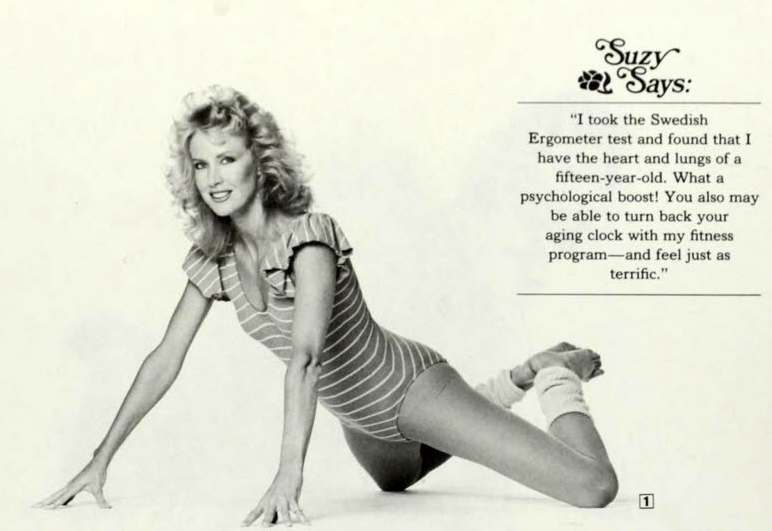 Perhaps the best thing about the book are the pearls of wisdom from Suzy Chapstick scattered throughout. Each nugget of insight is entitled “Suzy says” – oh, the joy of reading each one. In this message, Suzy let’s us know she has the heart and lungs of a 15 year old. Well, isn’t that special. 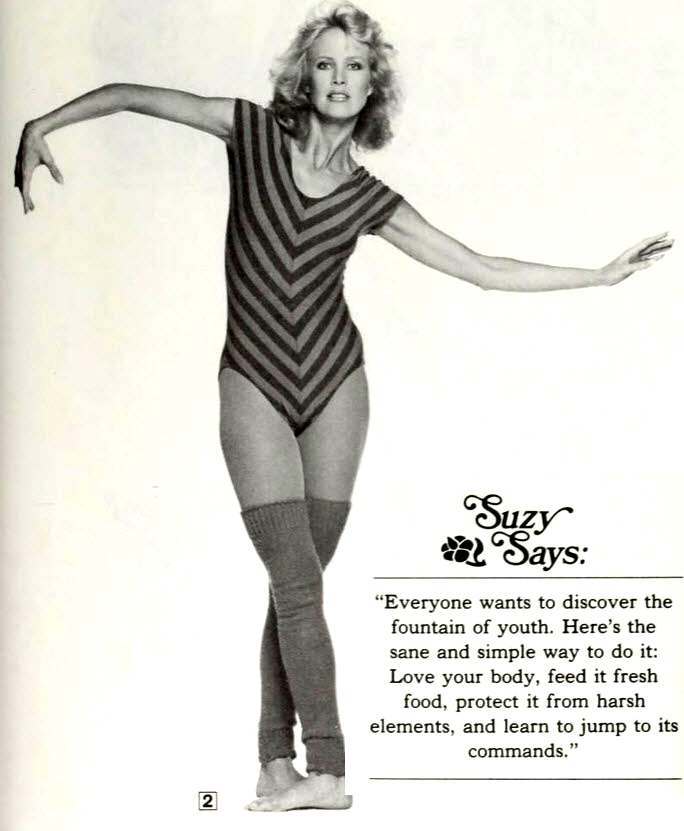 Profound. Lao-tzu has nothing on Suzy Chapstick. 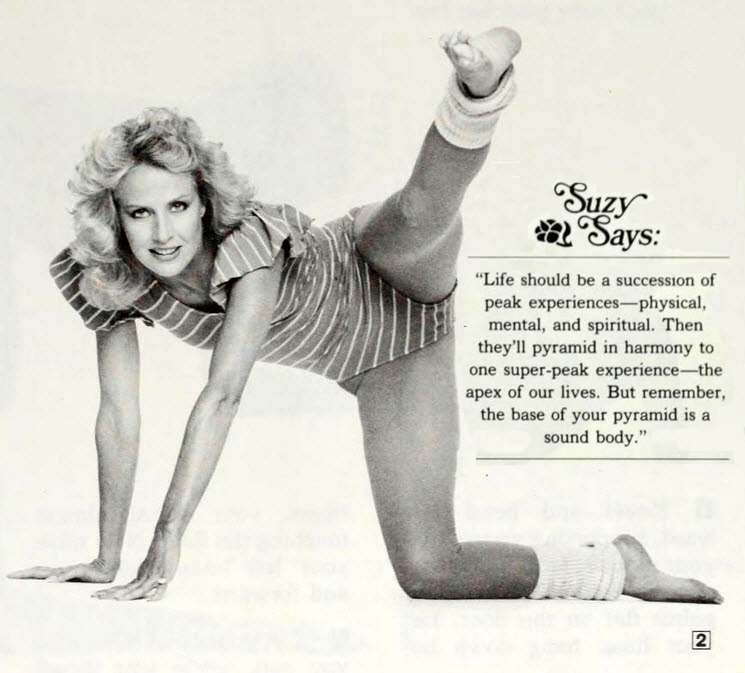 Someone needs to put the sayings of Suzy Chapstick into a single volume of collected wisdom. I’d put it up there with Pascal’s Pensées, but not quite on par with The Book of Proverbs or the Analects of Confucius. 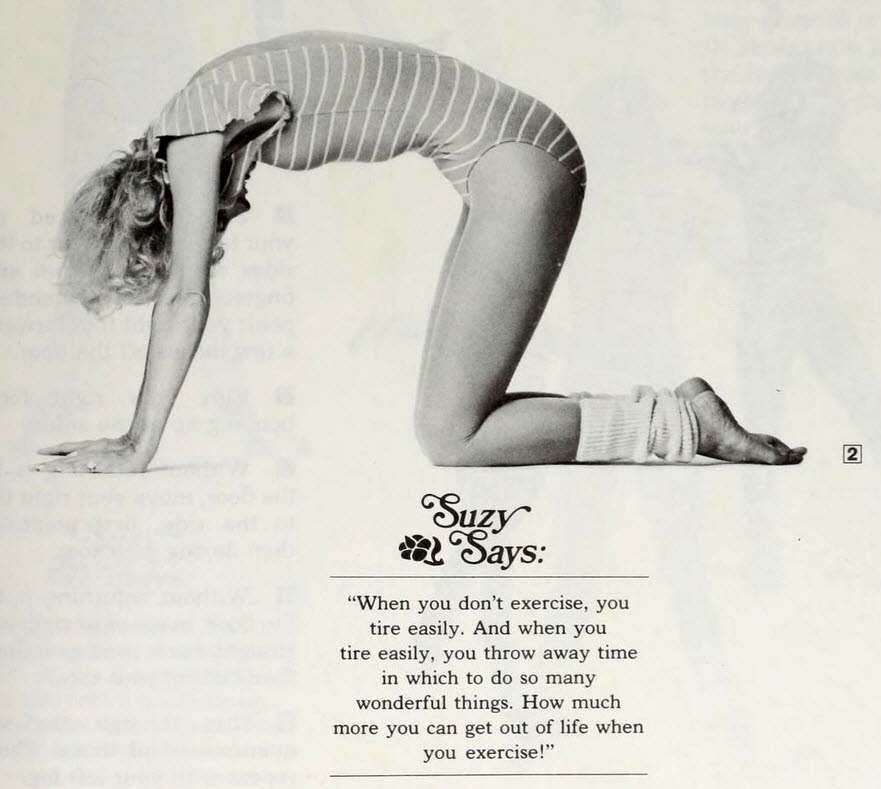 It’s true, Suzy.. But on the other hand, think of all the wonderful things you could be doing instead of exercising. If you stop exercising, think how much more free time you’ll have to “do so many wonderful things” and “get more out of life!” 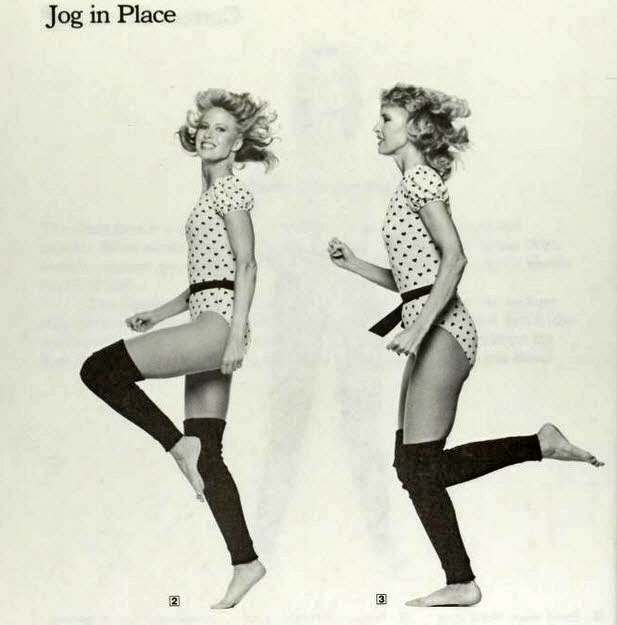 Well, that’s enough words-to-live-by for one day. Let’s move on to another aspect of this book that makes it so special – the workout routines. The I [love] NY Fitness Book is bursting at the seams with a wide array of workout numbers with very interesting names and movements. For instance, the one above is fairly standard – “jog in place” is about as standard as it gets….. but then there’s this – 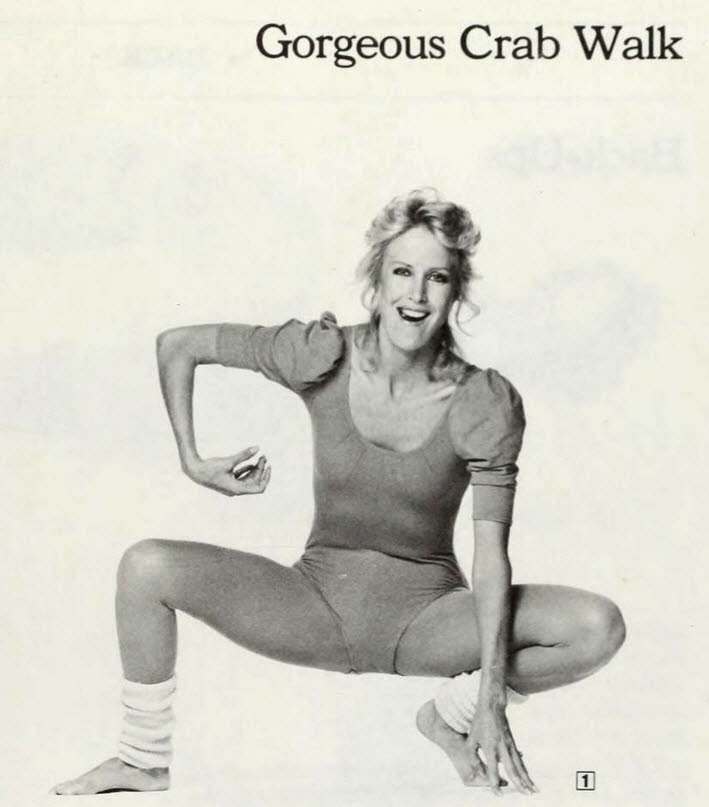 Can we all just unanimously agree that “Gorgeous Crab Walk” is a horrible workout name? The actual workout itself looks pretty awful as well. And let’s remember that this is the “I LOVE NY” workout. How crabs fit into that I don’t know…. although this was 1970’s NY , so maybe crabs is appropriate. 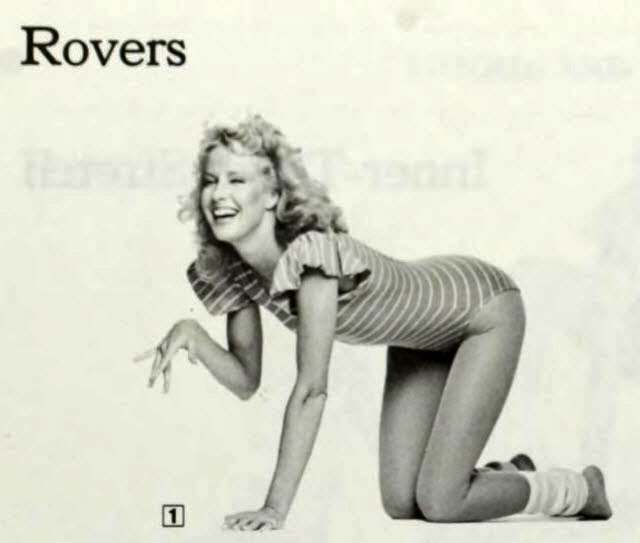 In keeping with the animal routine, Suzy Chapstick introduces us to a little number she calls a “Rover”. It’s not enough to pretend to be a dog for your workout (!), she actually has you hike your leg! 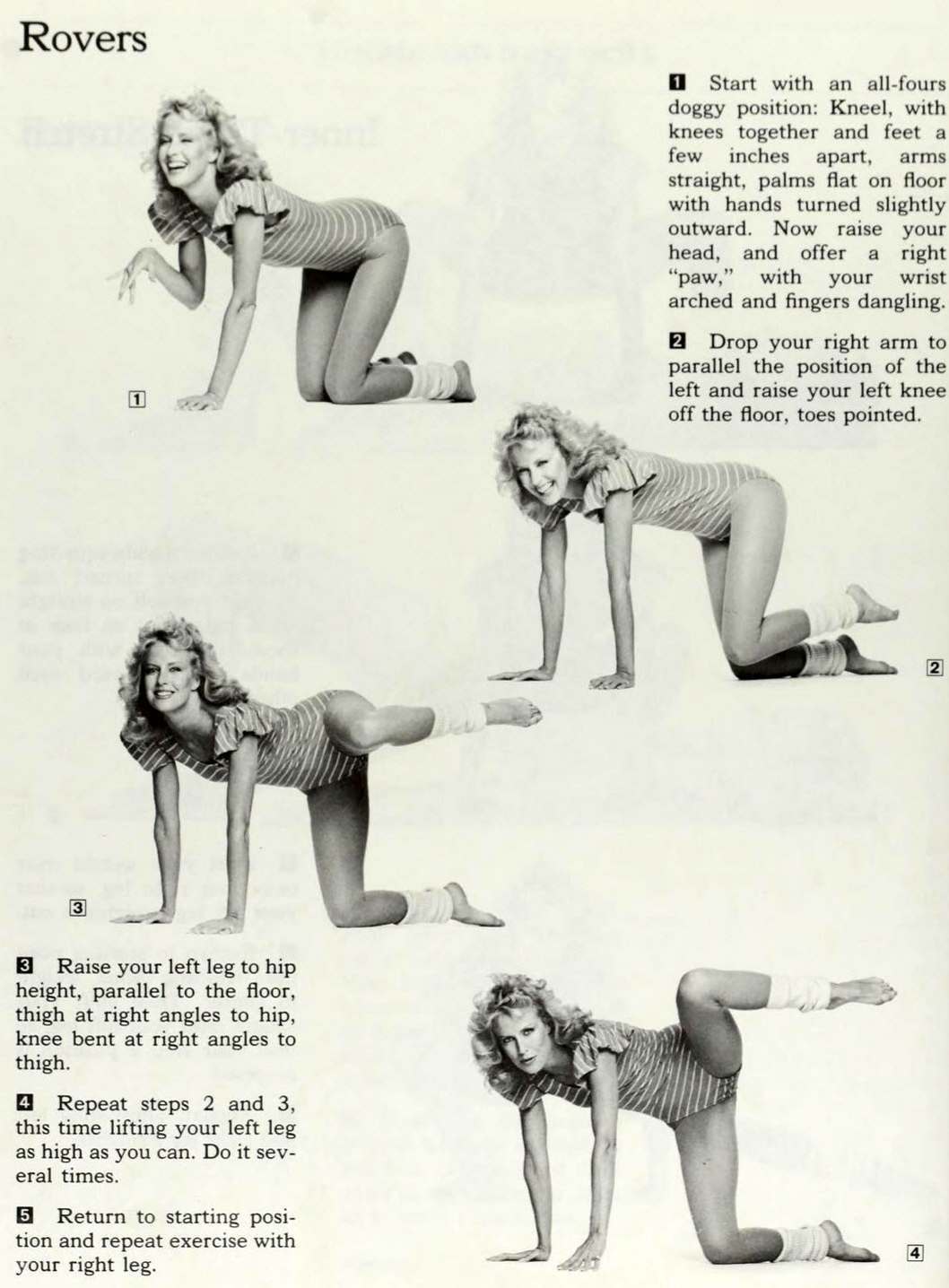 As a side note, how many shots of Suzy’s crotch as she lifts her legs did they need for this book?”

Answer: All of them. Teenage boys and lonely guys bought exercise books, too. 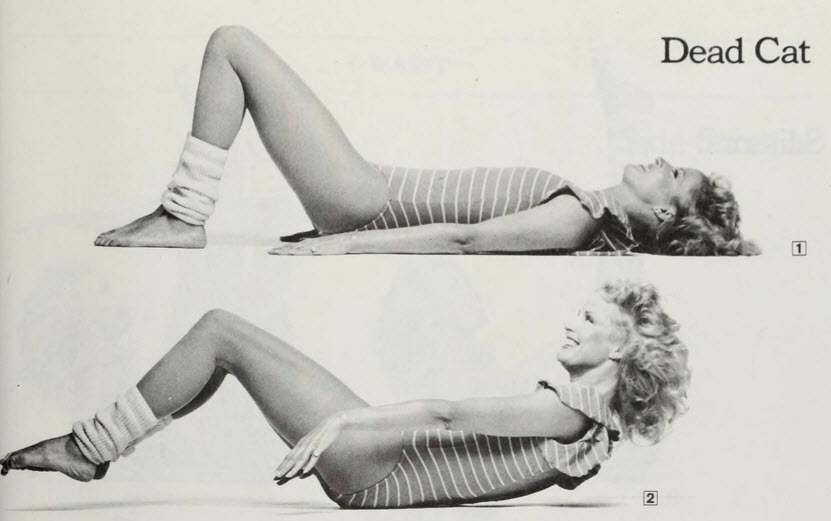 And one more for you animal lovers…. coming at you from Suzy’s mom. 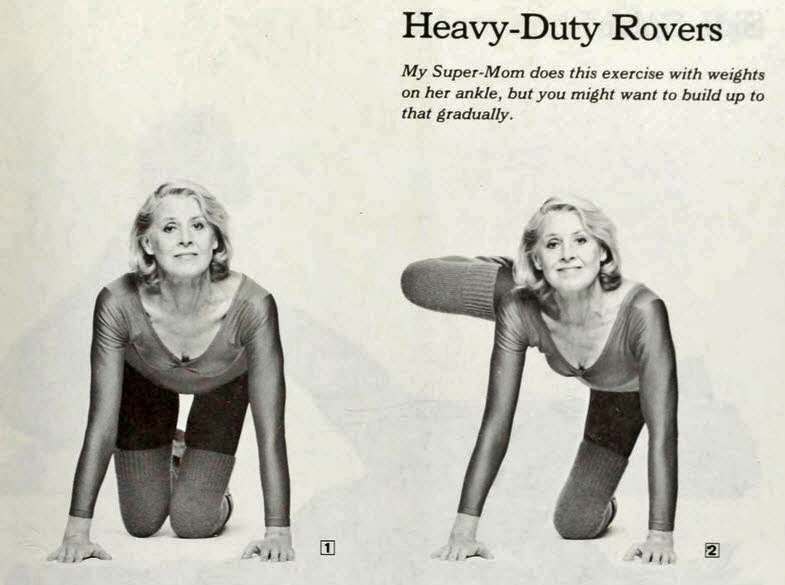 I hope “Super-Mom” doesn’t get carried away and actually begin marking her territory. Those kind of stains are hard to get up. 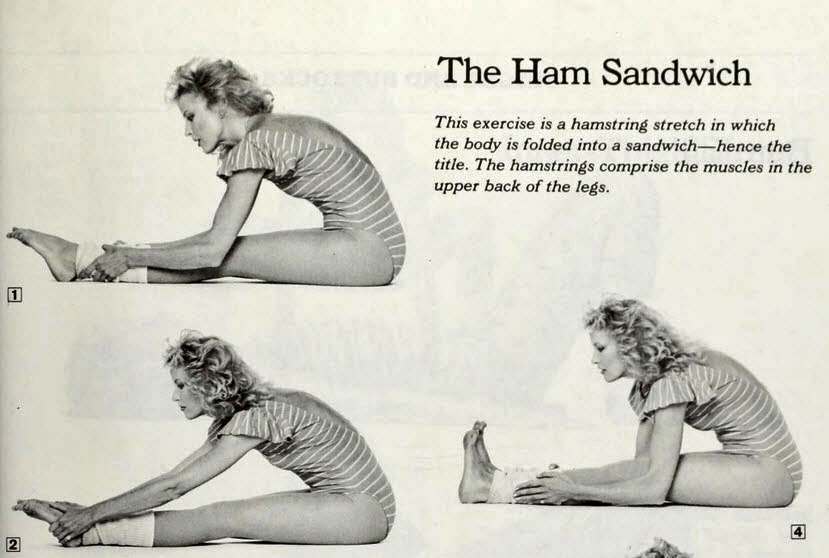 I understand it gets its name from the hamstring; but, c’mon! This has to be the worst name for a workout ever. She might as well have one called “The Delicious Cheeseburger”. 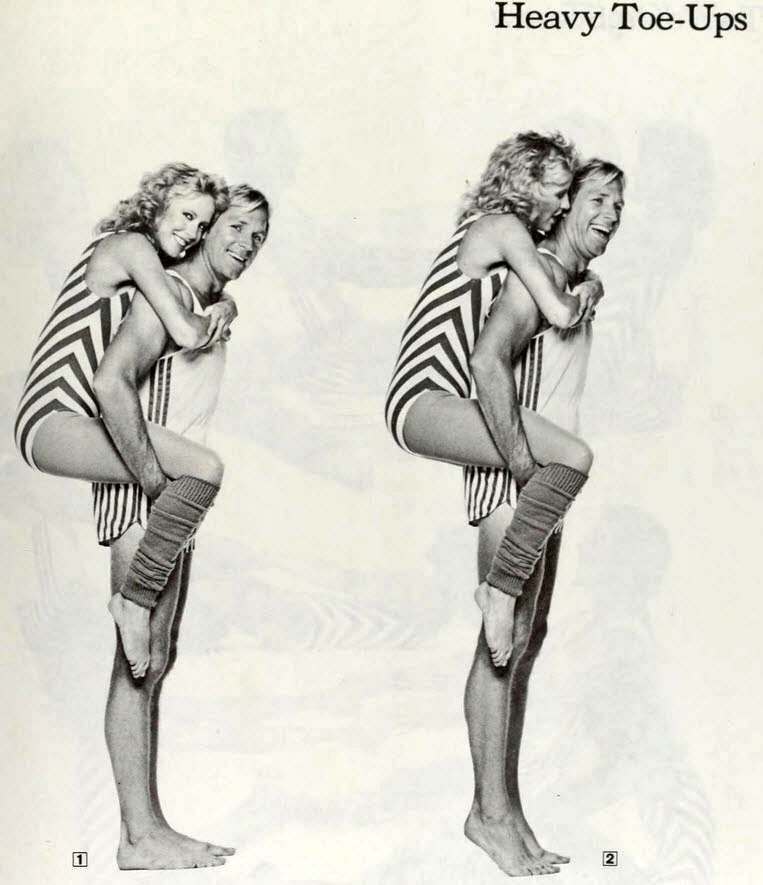 Oh, Good Lord. This is just getting silly. 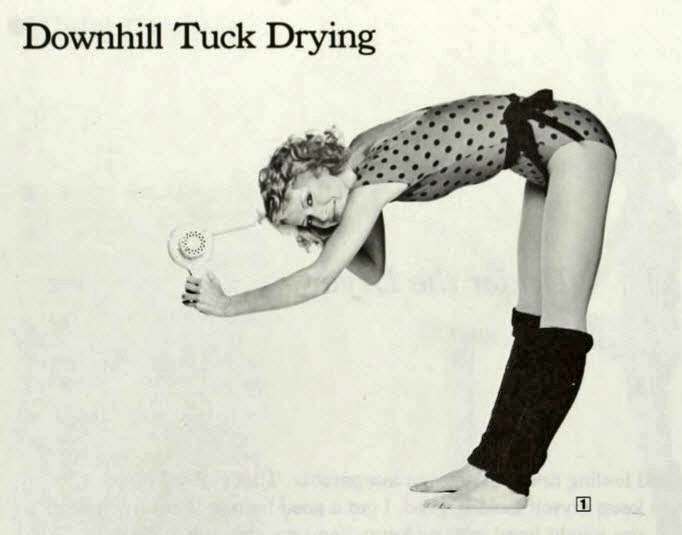 You’ll need props for this one, folks. 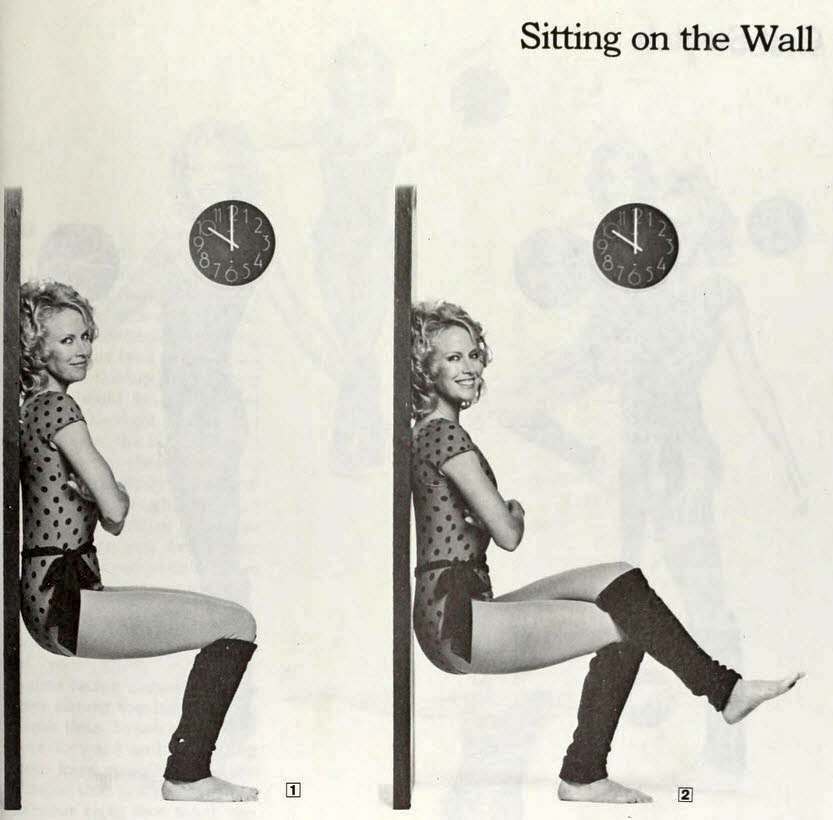 Not a very aerobic activity. In fact, not really even an activity. 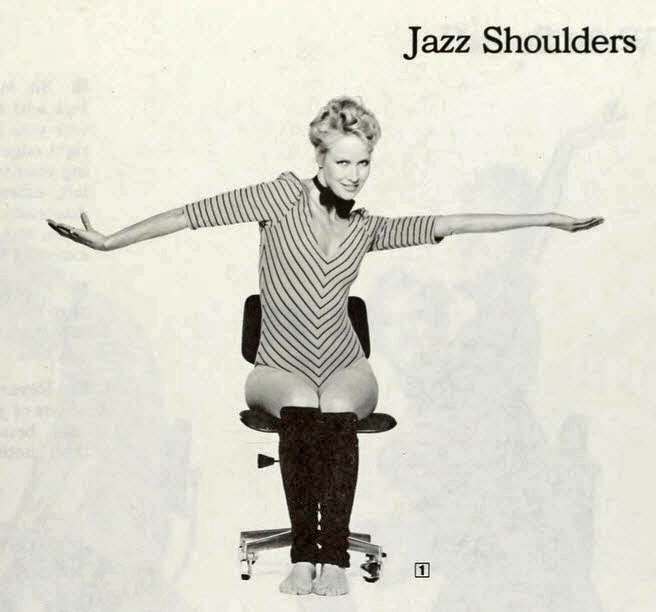 Is it essential to wear a bow tie before attempting Jazz Shoulders? Will I not feel the benefit if I opt for a cravat?I’m getting the distinct impression that Suzy Chapstick is running out of ideas…. 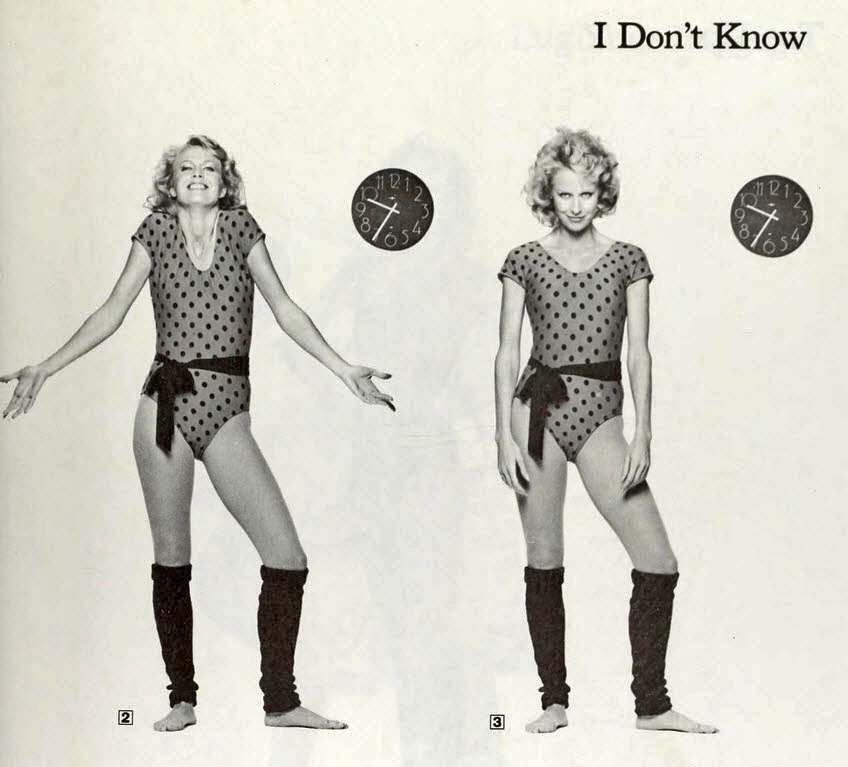 I’m sure some of you out there think I’m making this up – that this is Photoshopped. This is no joke, people. This exercise routine is really called “I Don’t Know”. It’s a little bit less strenuous than the “I Have Not A Clue” routine. 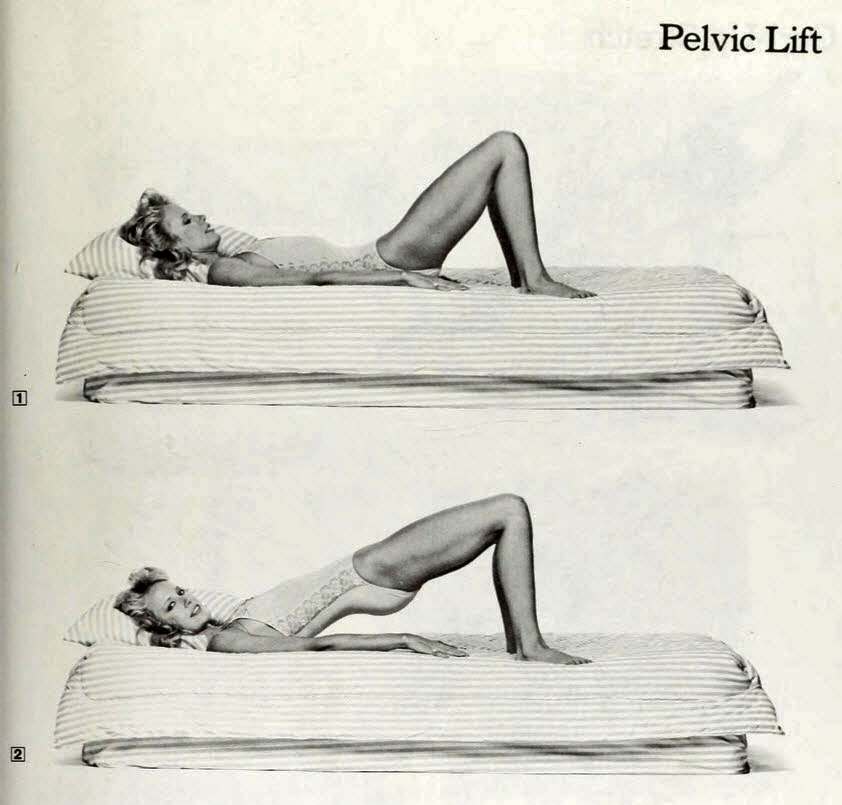 This one wouldn’t be so alarming is she wasn’t performing her lifts on a mattress. Somehow adding the bed took this from being a standard warm up exercise to Suzy Chapstick erotica.

And Suzy looks more like she’s wearing lingerie than a leotard.  I wonder how many books the Pelvic Lift sold from some guy flipping through the book and landing on this page – this has “impulse buy” written all over it. 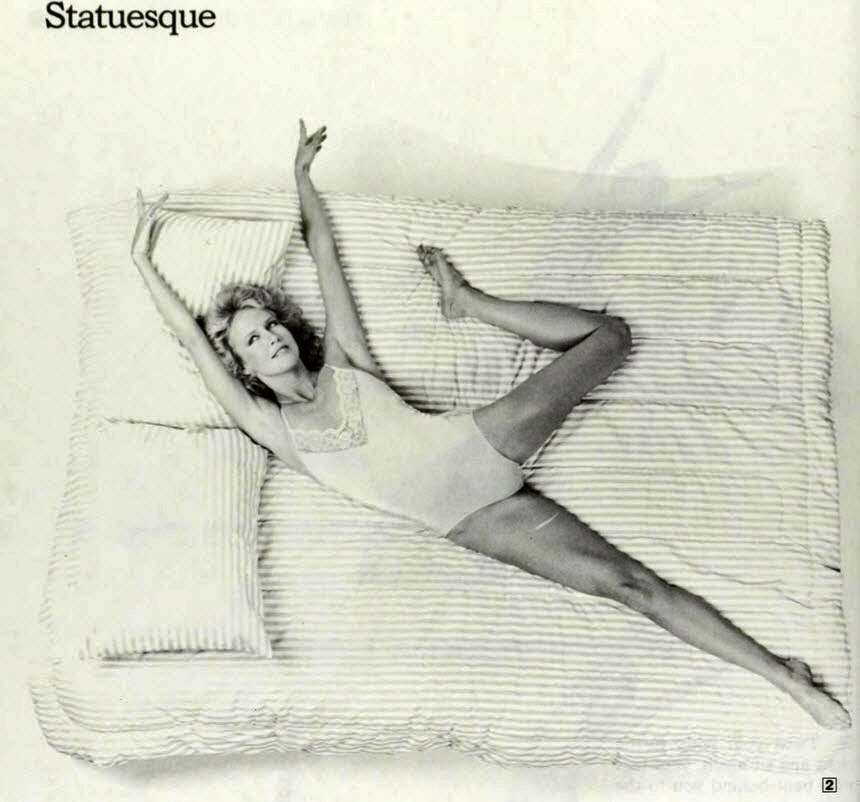 And I think that’s probably a good note to end on. I hope you enjoyed it. But before I go, a parting word from our gal, Suzy. 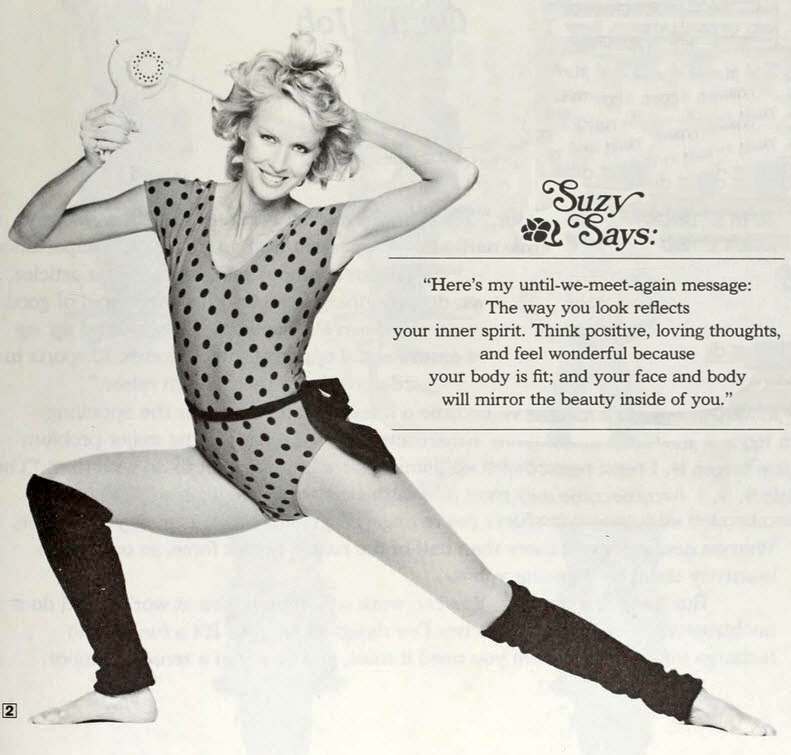 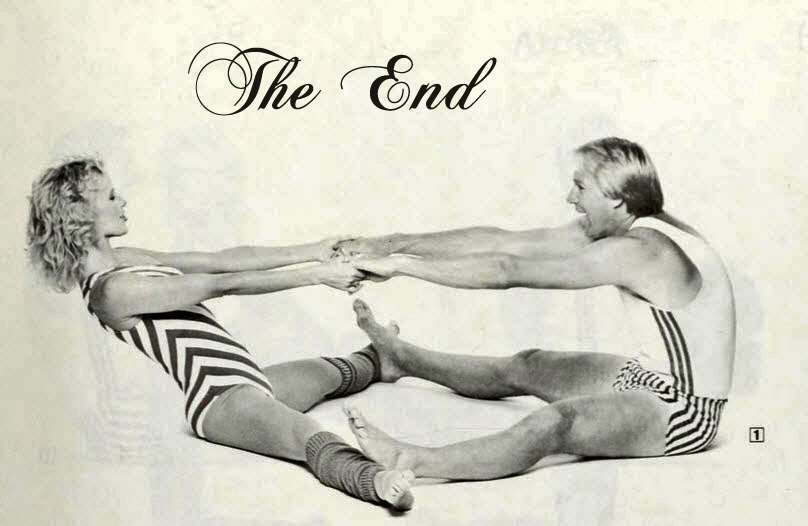