Before the fight, Clay had trash talked his opponent:

“I wanna rumble…I wanna rumble!. You’re a tramp. I am going to eat you up. Somebody’s going to die at the ringside tonight. Are you scared?”

No-one died. But Clay upset the odds and won.

Was it a fix? Liston had testified that the mob took a more than decent cut of fighters’ money. Liston had been backed by the criminal underworld, who’d been willing to back the former jailbird. 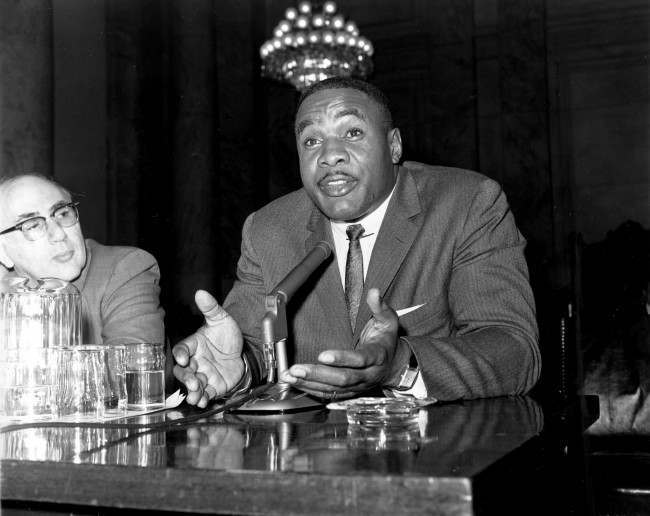 Liston had gotten his chance to be the world champion. 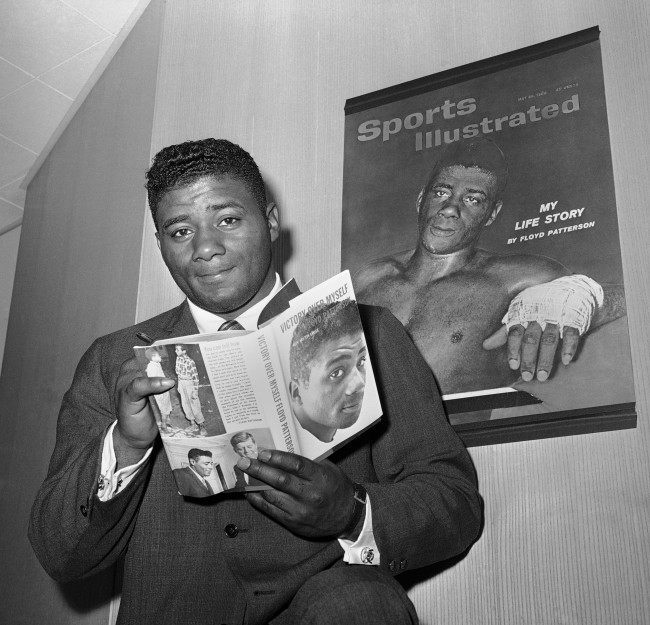 Heavyweight champion Floyd Patterson holds up a copy of his new book, Victory over myself, during press conference in New York on May 23, 1962. He said his title fight against Sonny Liston will be held in Chicago in mid-September ÂUnless something comes up.Â Patterson, who has been in training for some time, said he probably would go to Chicago a month before the fight. 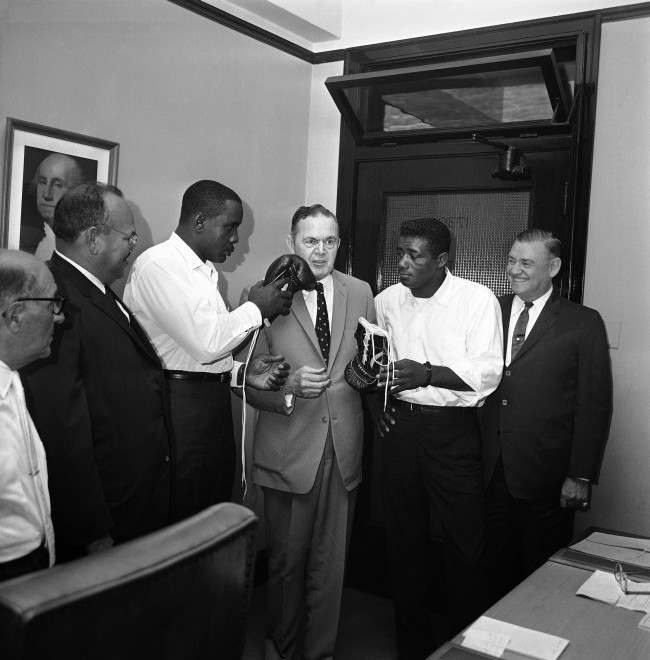 Joseph Triner, center, chairman of the Illinois Athletic Commission, gets feel of glove on his face when challenger Sonny Liston, left, and Champion Floyd Patterson, right, argued about use of gloves in his office in Chicago, Sept. 17, 1962. Liston wants to wear a glove made in Chicago when he meets Patterson in ring on September 25, for heavyweight championship. Patterson says he is partial to a glove manufactured in New York. Commission took the point under advisement. 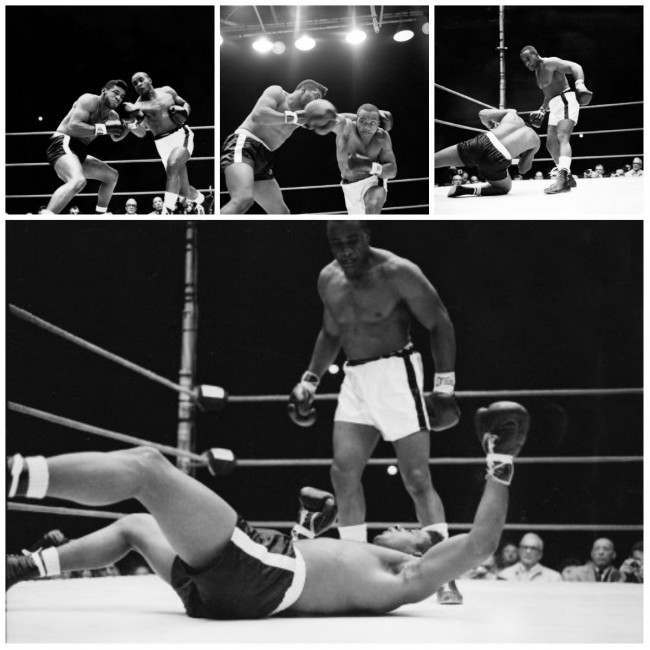 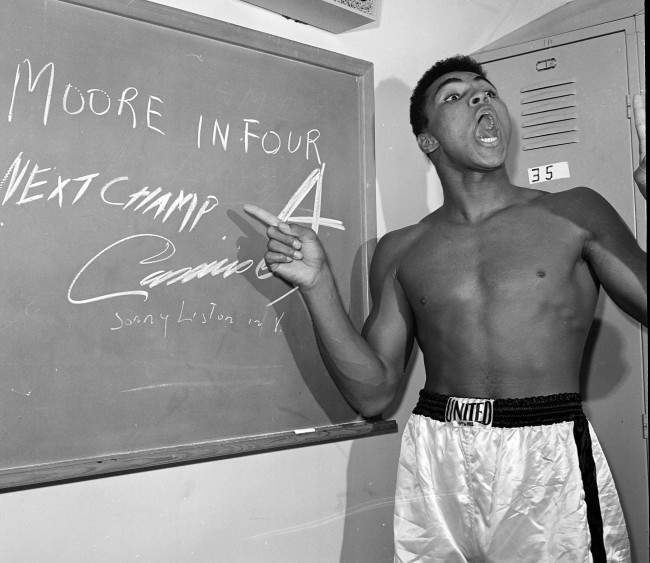 Young heavyweight boxer Cassius Clay points to a sign he wrote on a chalk board in his dressing room before his fight against Archie Moore in Los Angeles, Nov. 15, 1962, predicting he’d knock Moore out in the fourth round, which he went on to do. The sign also predicts Clay will be the next champ via a knockout over Sonny Liston in eight rounds. Photo was made after the Clay-Moore fight.

How many rounds would Liston last, Cassius, who had just defeated Henry Copper? 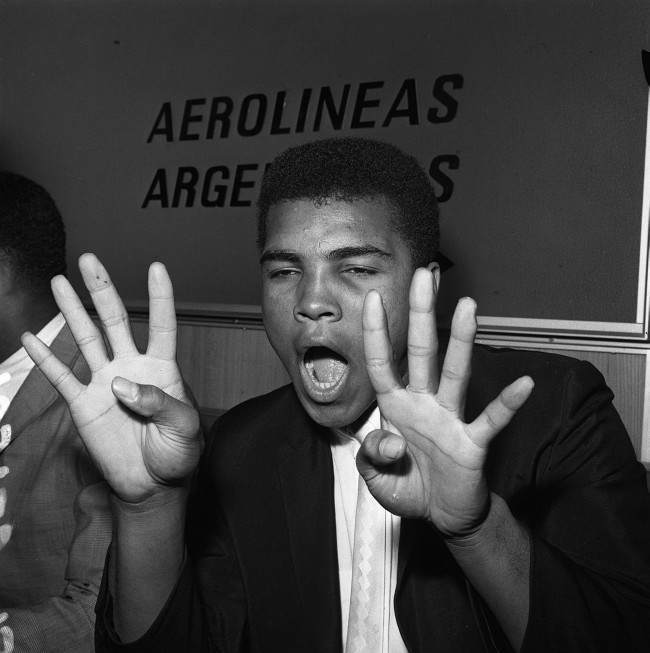 . No amount of ranting and raving from Clay in the pre-fight build-up could convince the experts that the so-called ‘Louisville Lip’ would be doing much talking in the ring. Of 46 ringside sports writers polled on the night of the fight on February 25 1964, 43 predicted an inside-the-distance win for Liston.

But first Patterson would take on Liston in a rematch. 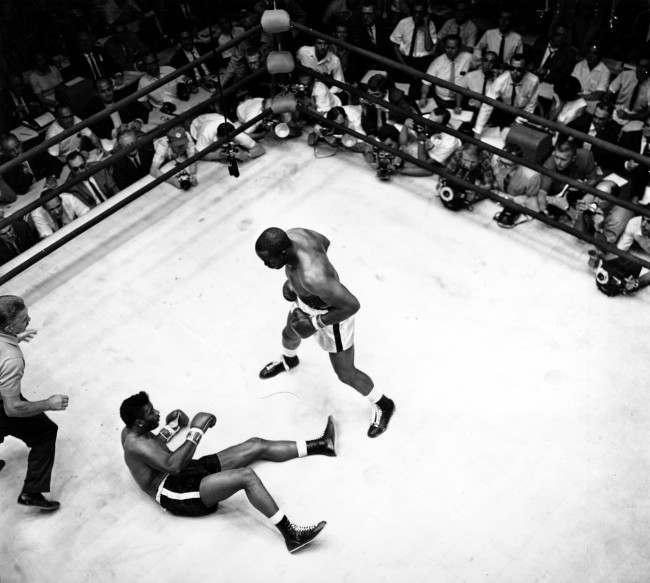 Floyd Patterson is on the ground after world heavyweight champion Sonny Liston staggers with a right then connects with a left for the knock out in Las Vegas, Nev. on July 22, 1963.

By now Ali was desperate to get at Liston. The fight was arranged at the Denver Hilton Hotel on November 6, 1963. The press conference was a lively affair with Clay doing most or all of the talking. 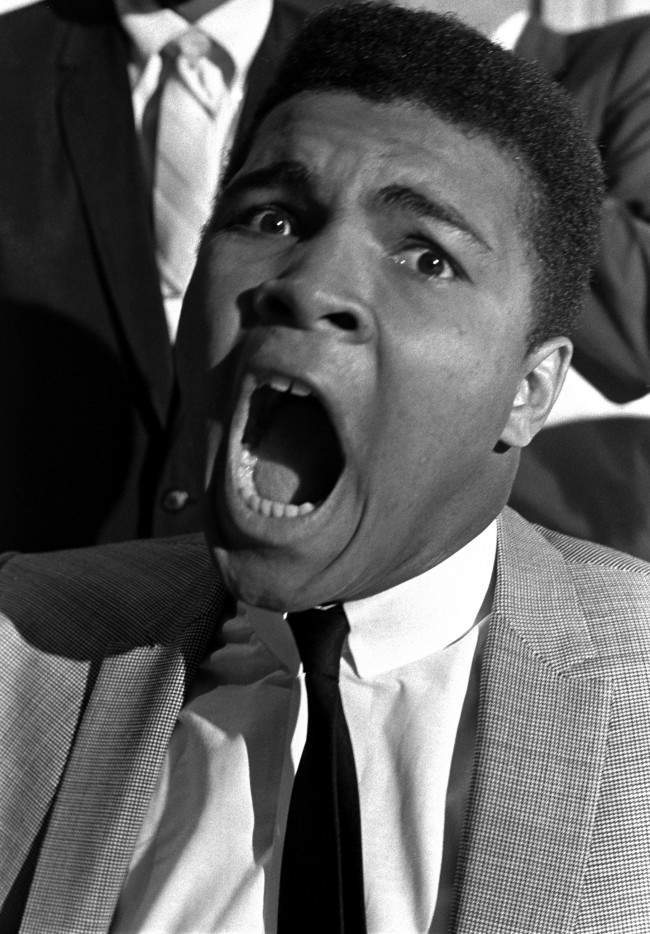 Ali was proving to be a big drawer. 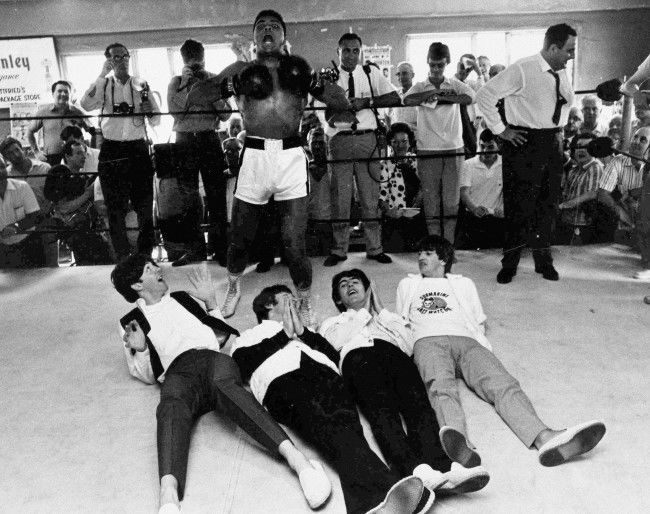 – In this Feb. 18, 1964 file photo, Cassius Clay poses with The Beatles, from left, Paul McCartney, John Lennon, George Harrison and Ringo Starr while visiting the heavyweight boxing contender at his training camp in Miami Beach, Fla. A few days earlier the group had appeared for the first time on the Ed Sullivan Show. A week later, Clay would beat Sonny Liston and go on to even greater things as Muhammad Ali. 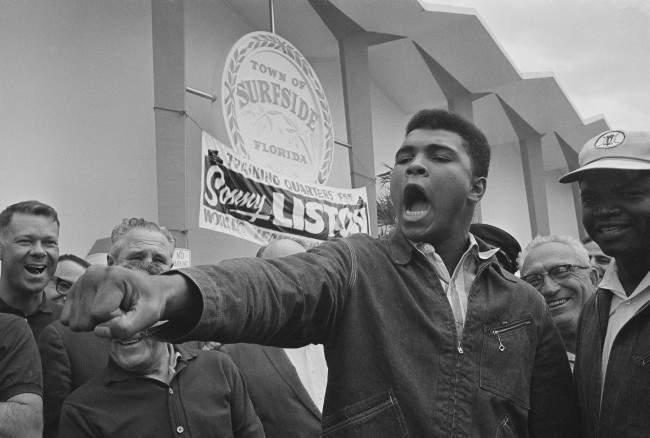 Cassius Clay thrusts his fist out as he describes to a crowd gathered in Surfside, Fla., how he plans to hit champion Sonny Liston in their upcoming bout, in this Feb. 19, 1964 file photo

The fight was on. 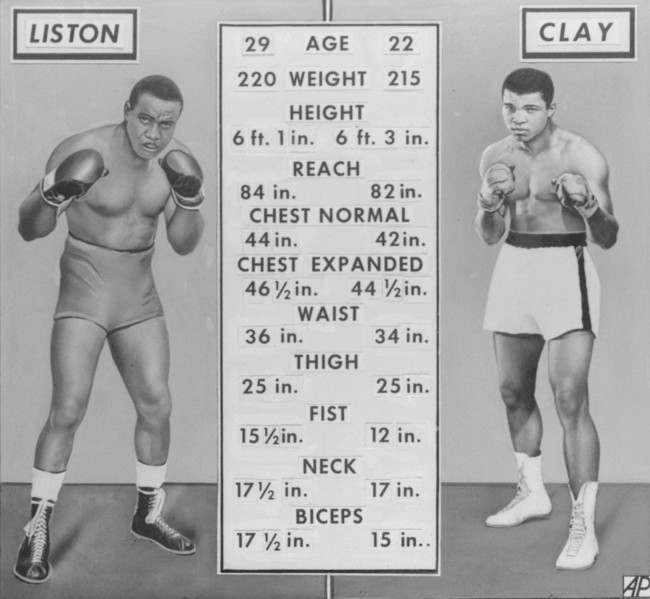 This is how champion Sonny Liston and challenger Cassius Clay measure up for their world heavyweight title bout at Miami Beach, February 25, 1964.

No moment would be missed. 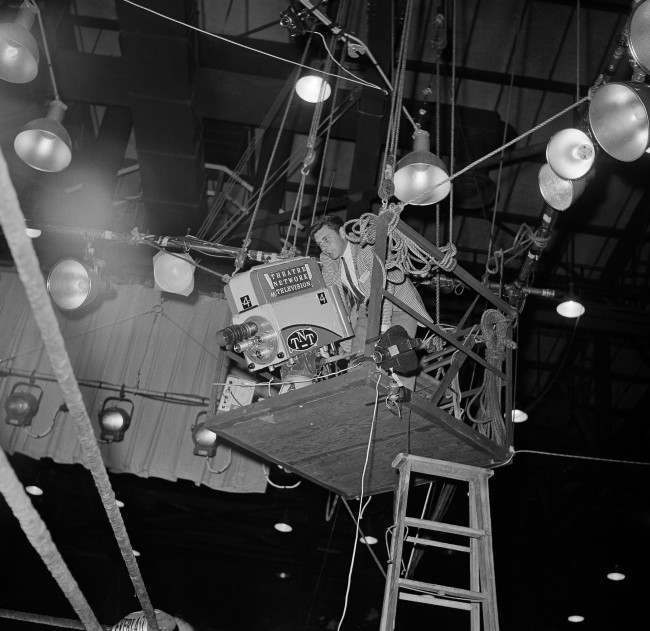 A technician adjusts the television camera that is suspended directly over one of the corners of the ring in which Sonny Liston, heavyweight champion, and challenger Mohammad Ali (Cassius Clay) will battle for the title on Feb. 25, 1964 in Miami Beach, Florida. The fight in Miami beach convention hall will be televised to European stations by satellite and to United States theaters by closed-circuit television. 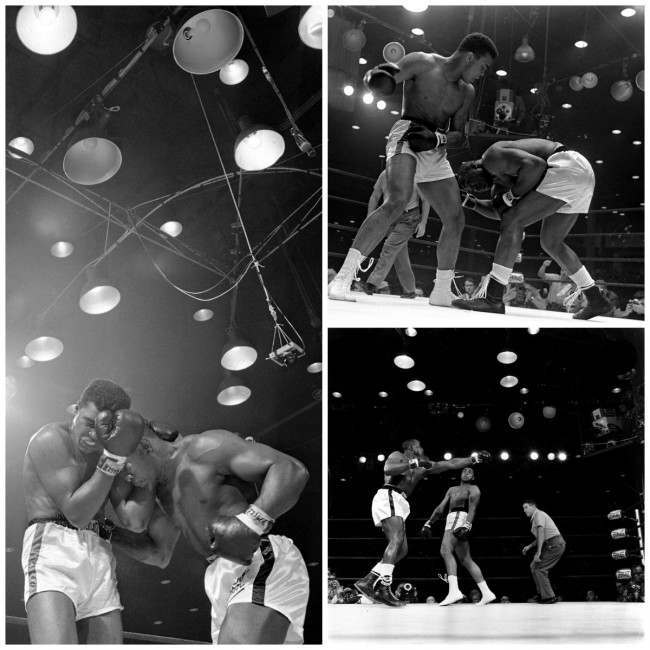 At the start of the seventh, Liston stayed in his seat. It’s a technical knock-out. Ali wins! 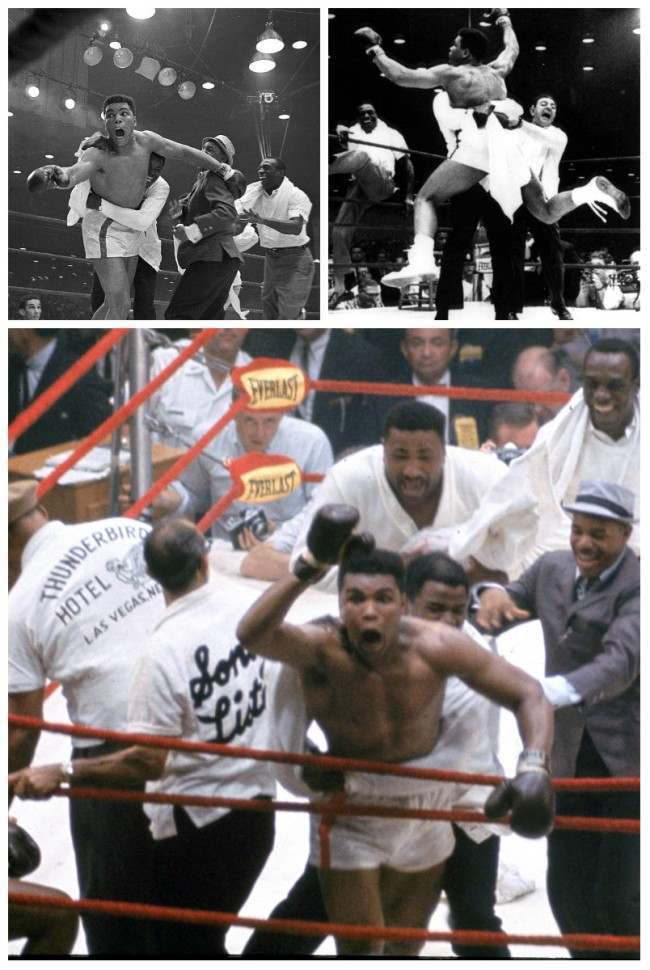 A rematch was arranged. And it proved to be even more controversial…

On May 25, 1965, in Lewiston, Maine, Ali floored Liston. Referee Jersey Joe Walcott never counted to 10. He ushered Ali into a neutral corner. A full 17 seconds passed before Liston finally rose. A writer at ringside had counted. He told Walcott, who stopped the fight and declared Ali the victor.