“It must be naive, simple, easy, cheerful, merry, and as illusory and beautiful as a child’s daydream…”

– Konstantin Stanislavsky on The Blue Bird by Maurice Maeterlinck 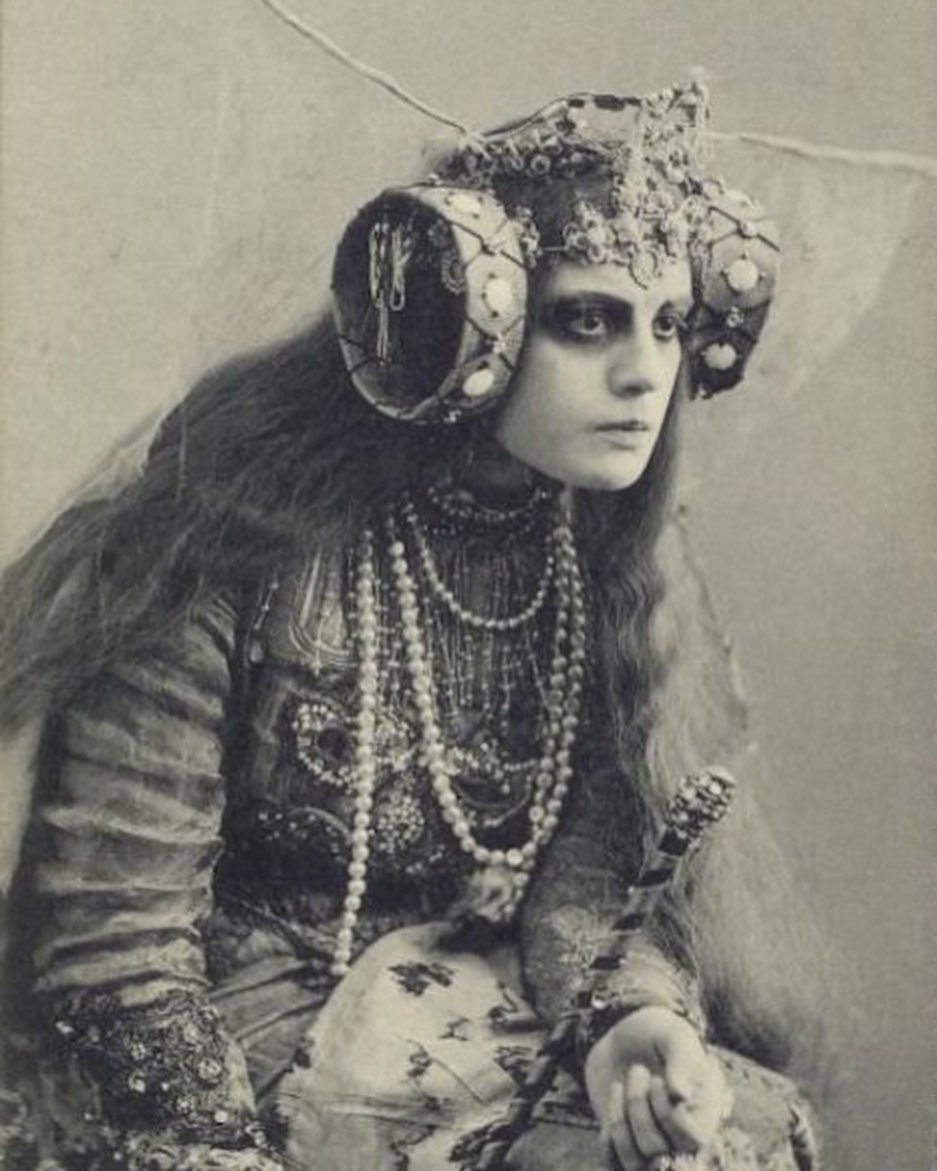 Maria Germanova as The Witch in The Blue Bird

These photographs are of actors in their costumes for Konstanin Stanislavski’s production of Belgian playwright and poet Maurice Maeterlinck’s The Blue Bird (L’Oiseau bleu) at the Moscow Arts Theatre in 1908.

The story begins one night, when a boy named Tyltyl (Alexander Tairov) and a girl named Mytyl (Alisa Koonen) are visited by the good fairy Berylune. The fairy’s granddaughter is ill. Only the Blue Bird can help and make her happy.

They talk about beauty, and the fairy shows the children how to see the souls of objects. Things like water, fire, milk, bread, sugar and night are transformed into living creatures with personalities of their own.

They unlikely team then embark on a journey in search of the magical blue bird of happiness. 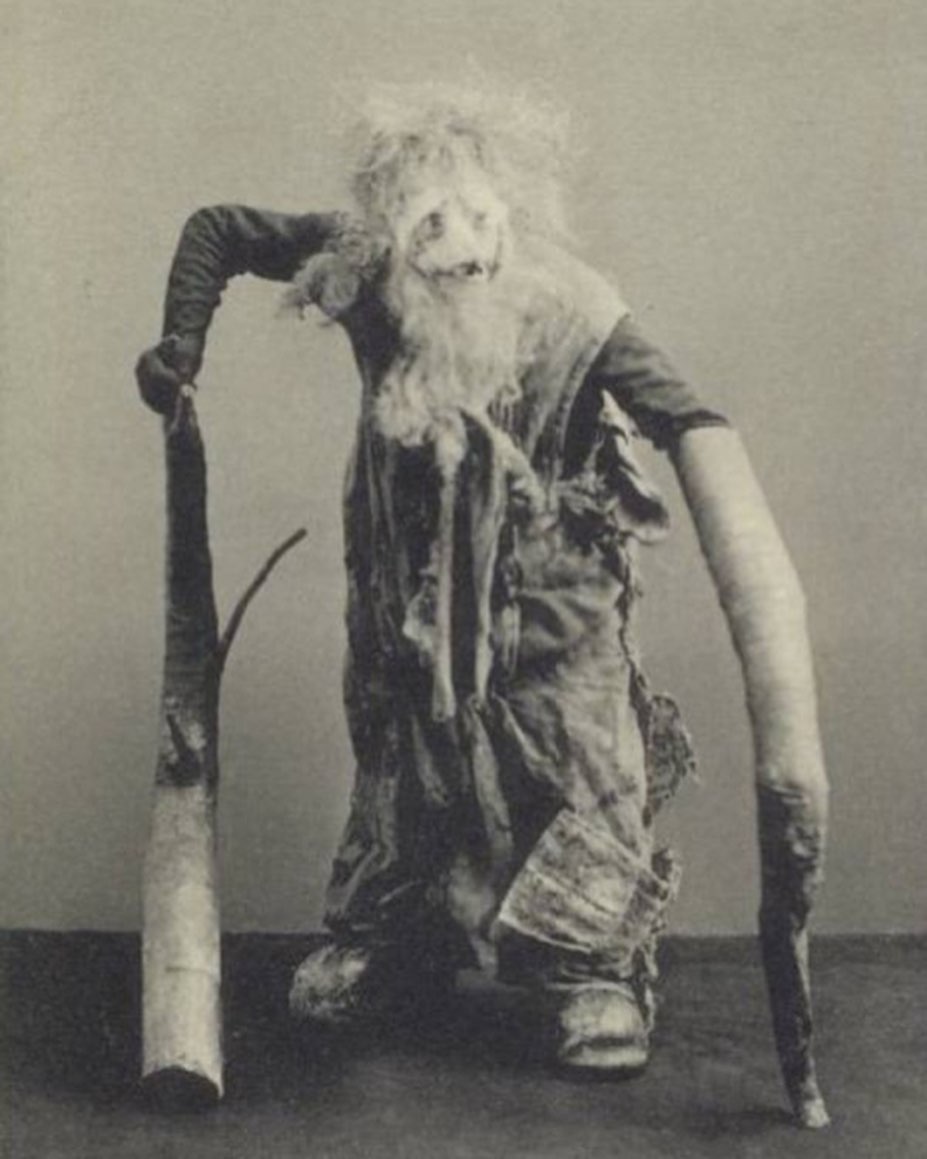 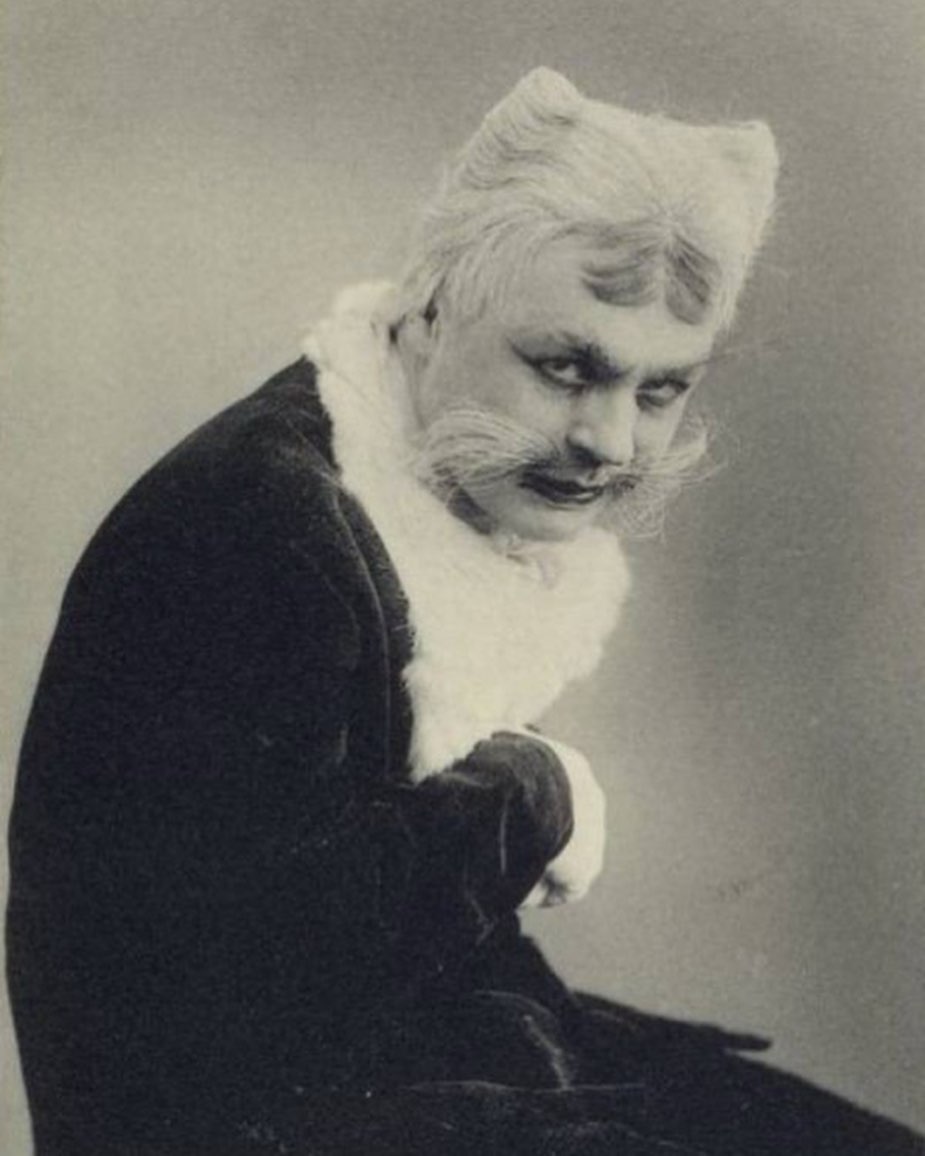 Stepan Leonidovich Kuznetsov. as the Cat

“… For me as a director, the most important aspect is the stage direction, but it doesn’t have to be implemented verbatim. He [Maeterlinck] may be a brilliant writer, but he’s no good at costumes, set design, and stage mechanics.” 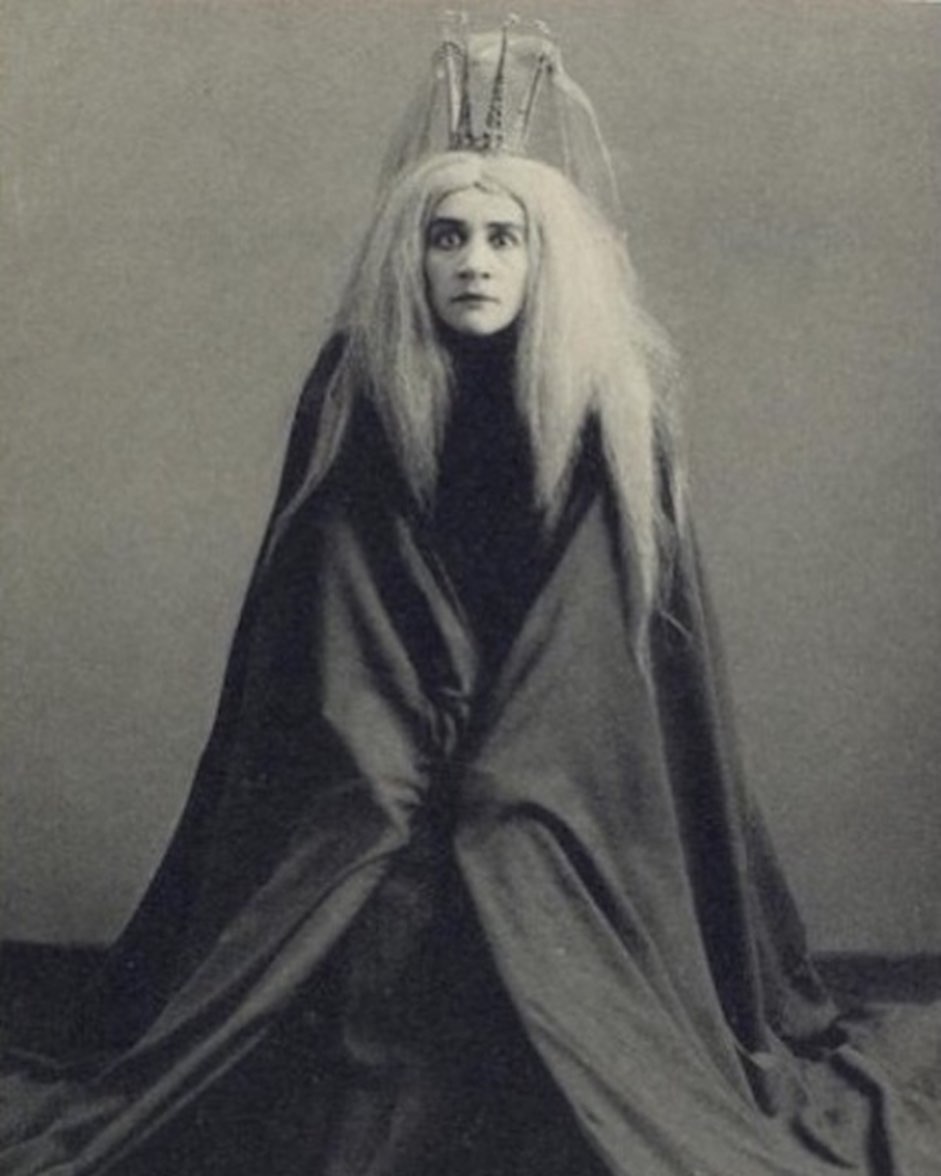 MYTYL is dressed like Gretel or Little Red Riding-hood.

LIGHT.—The “moon-coloured” dress in Perrault’s Peau d’âne; that is to say, pale gold shot with silver, shimmering gauzes, forming a sort of rays, etc. Neo-Grecian or Anglo-Grecian (à la Walter Crane) or even more or less Empire style: a high waist, bare arms, etc. Head-dress: a sort of diadem or even a light crown.

THE FAIRY BÉRYLUNE and NEIGHBOUR BERLINGOT.—The traditional dress of the poor women in fairy-tales. If desired, the transformation of the Fairy into a princess in Act I may be omitted.

THE DOG,—Red dress-coat, white breeches, top-boots, a shiny hat. The costume suggests that of John Bull.

N.B.—The heads of the DOG and the CAT should be only discreetly animalised.

THE HAPPINESSES OF THE HOME.—Dresses of various colours, or, if preferred, costumes of peasants, shepherds, wood-cutters and so on, but idealised and interpreted fairy-fashion.

MATERNAL LOVE.—Dress very similar to the dress worn by Light, that is to say, supple and almost transparent veils, as of a Greek statue, and, in so far as possible, white. Pearls and other stones as rich and numerous as may be desired, provided that they do not break the pure and candid harmony of the whole.

SUGAR.—A silk gown, cut like that of a eunuch in a seraglio, half blue and half white, to suggest the paper wrapper of a sugar-loaf. Eunuch’s headdress.

FIRE.—Red tights, a vermilion cloak, with changing reflections, lined with gold. An aigrette of iridescent flames.

WATER.—A pale-blue or bluish-green dress, with transparent reflections and effects of rippling or trickling gauze, Neo-Grecian or Anglo-Grecian style. but fuller and more voluminous than that of LIGHT. Head-dress of aquatic flowers and seaweed.

THE ANIMALS.—Popular or peasant costumes.

THE TREES.—Dresses of different shades of green or the colour of the trunks of trees. Distinctive attributes in the shape of leaves or branches by which they can be recognised. 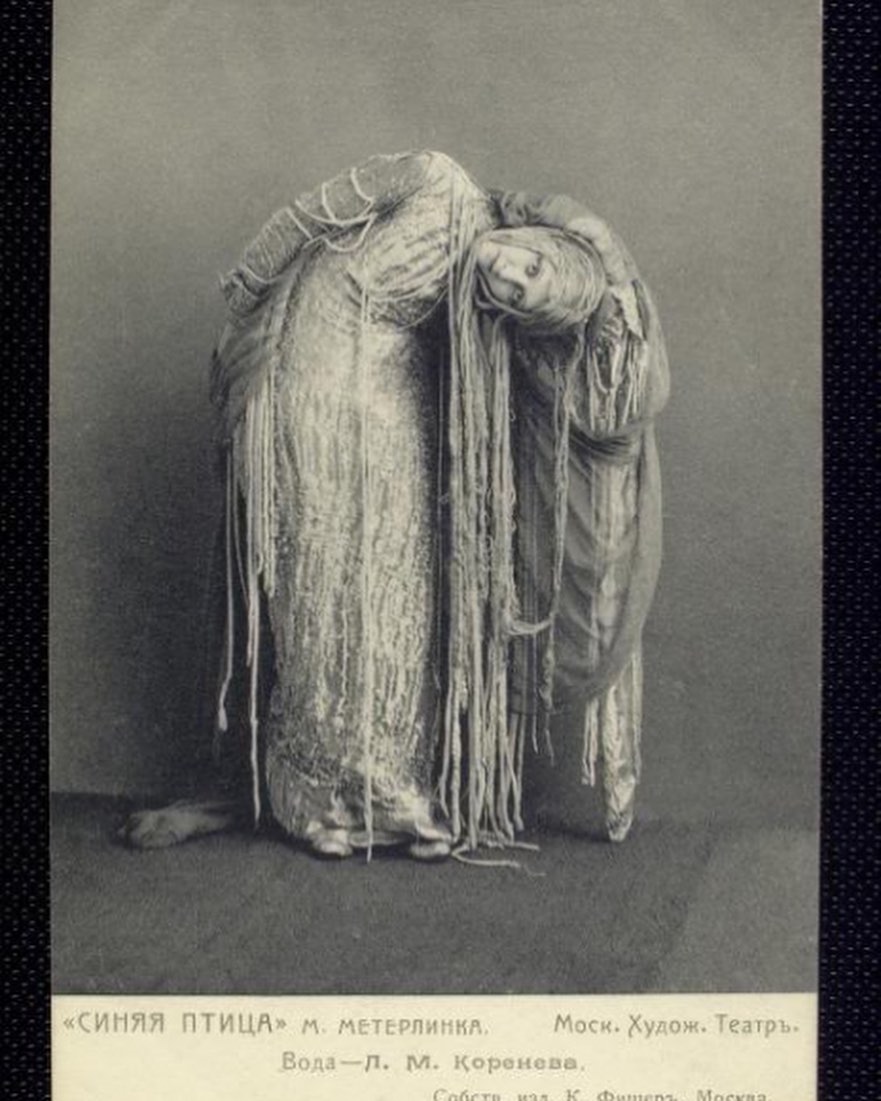 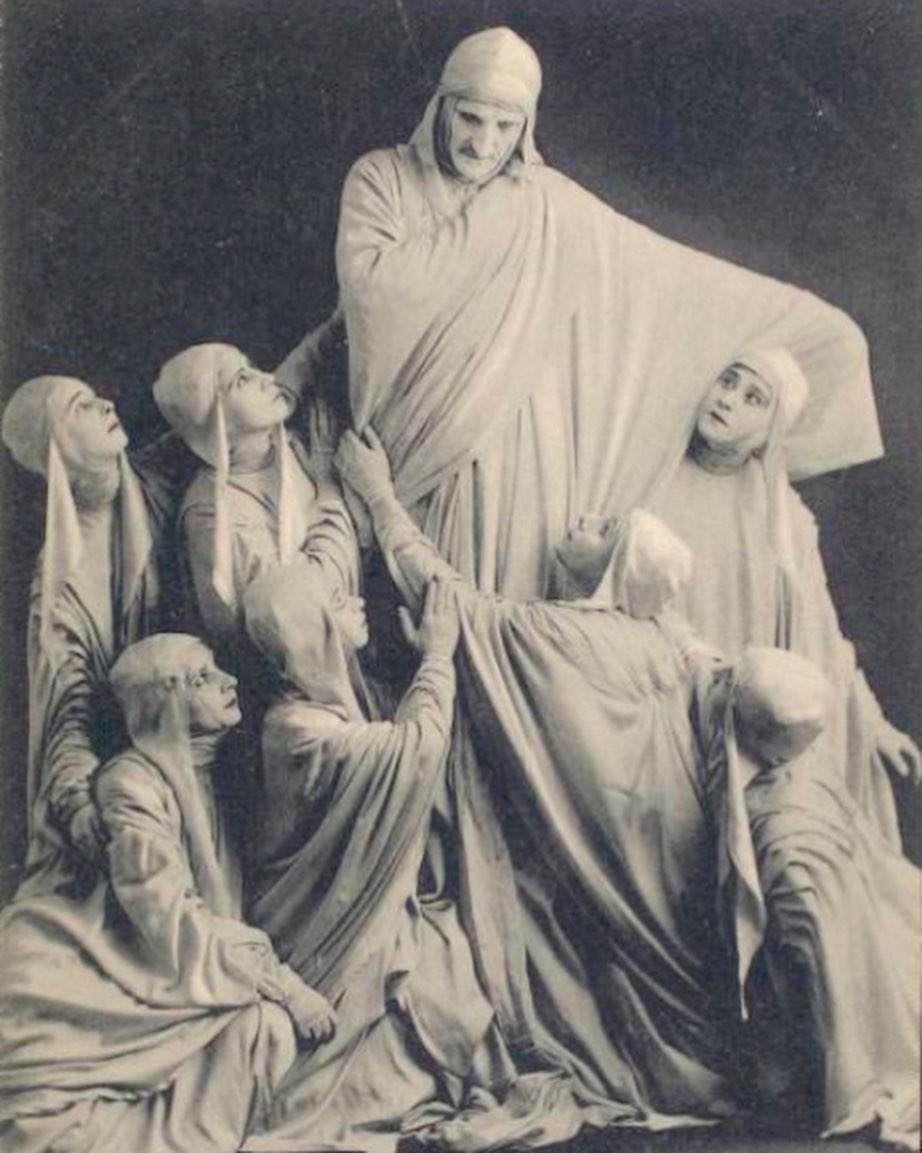 Znamensky as ‘Time ‘ with the ‘Souls of the Unborn’ 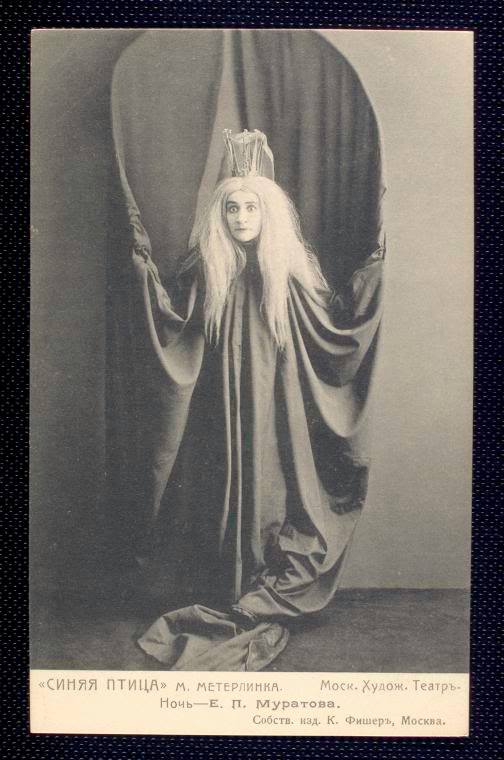 I asked Stanislavsky eagerly for photographs of scenes from “The Blue Bird” or else for the original designs of the scenic artist so that I might have them copied… the photographs, I was told, were not available – except those of the players themselves – for the originals had been made by Fischer, a German, and had been destroyed in the pogrom at the beginning of the war in 1914.  And in the difficult times Russia has undergone since then, no others have been made.

When I pressed my point and asked about the original designs, the firm, square but kindly face of my host carried a passing glance of embarrassed modesty and then admitted that there were no designs. He had conceived them himself and had personally directed the artist, V. E. Yevgenoff, in the execution of the settings.

The Russian Theater Under the Revolution by Oliver Sayler, 1920 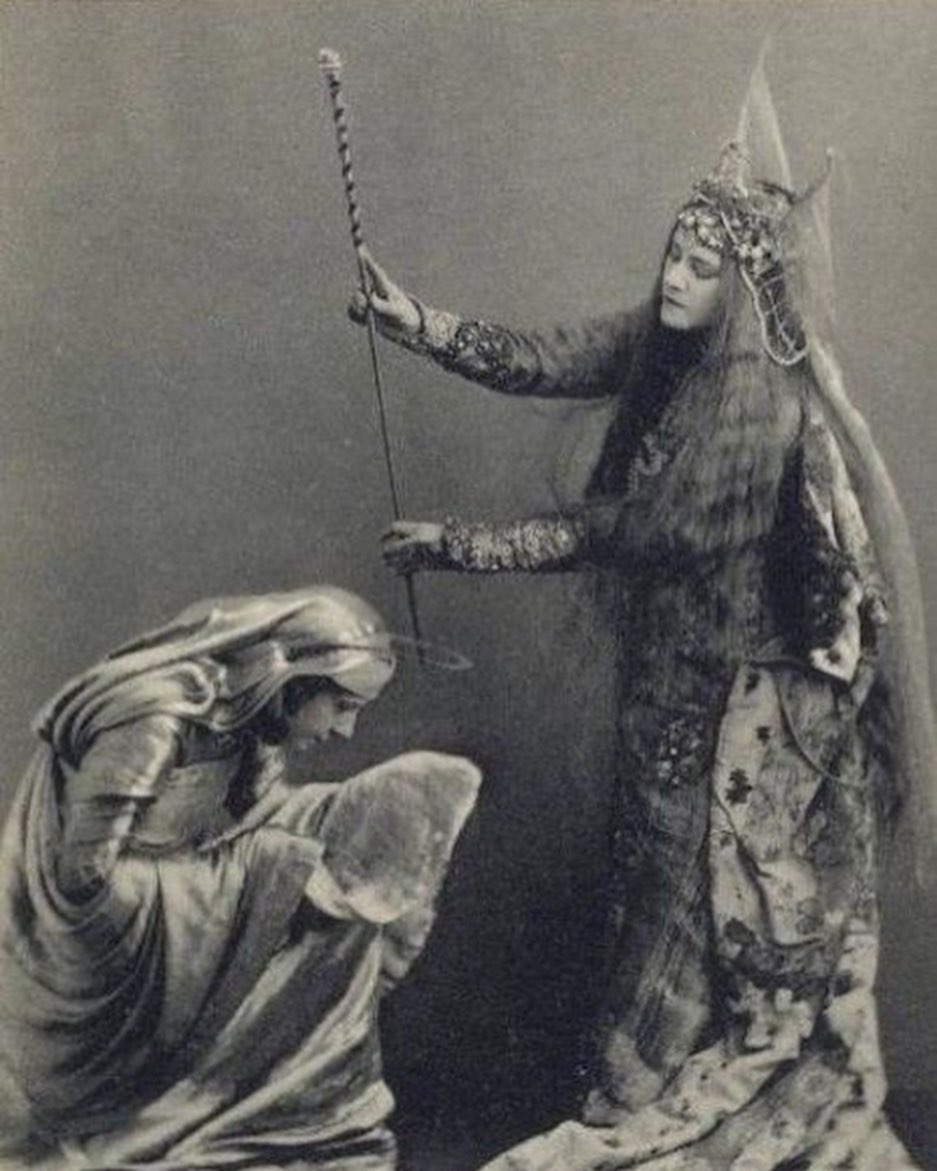 Baranovskaya as ‘Light’ & Margarita Savitskaya as the Fairy 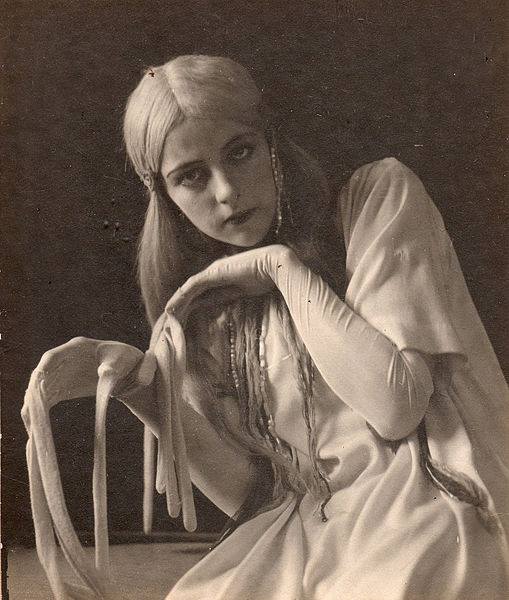 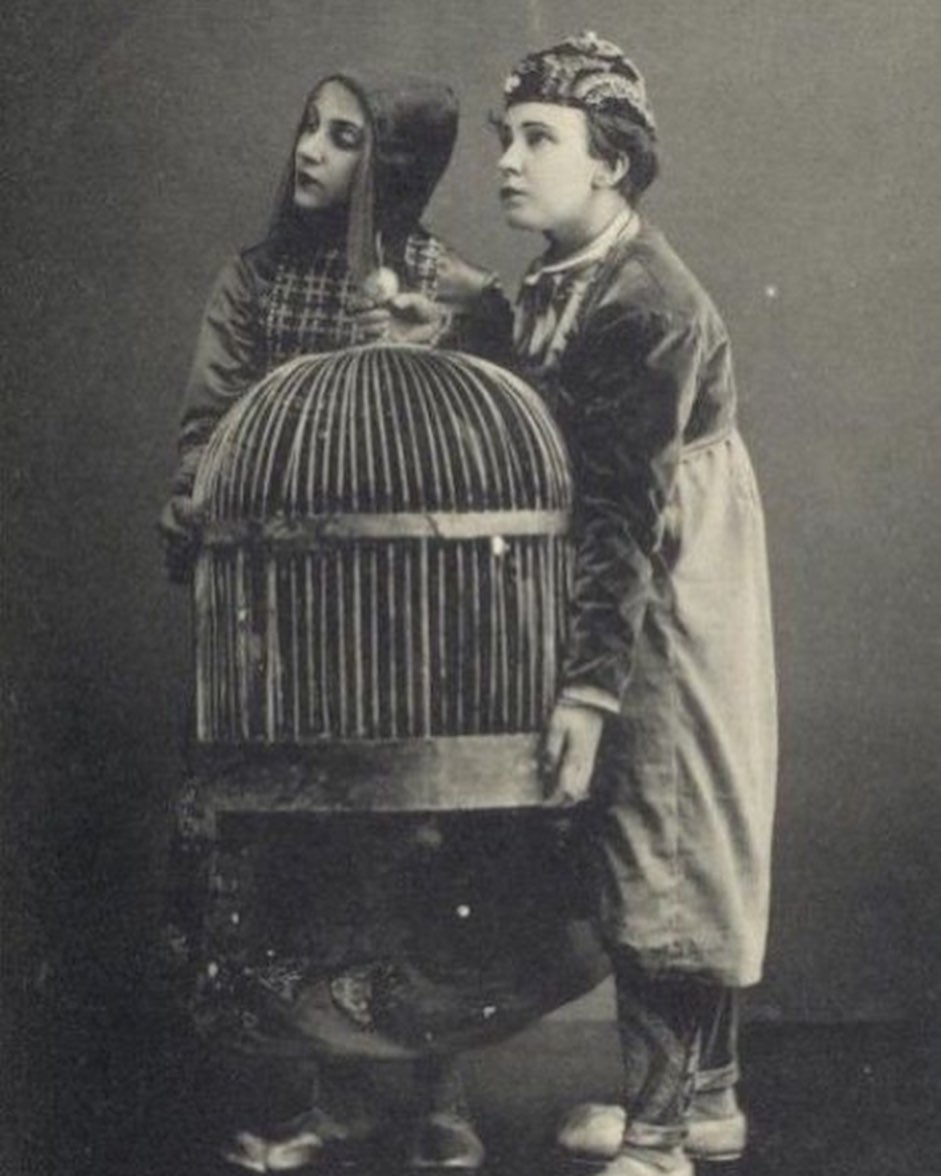 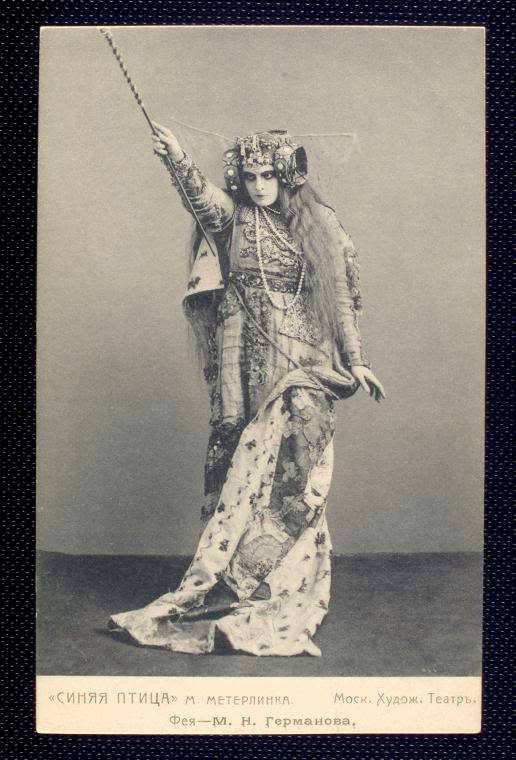 Maria Germanova as The Witch 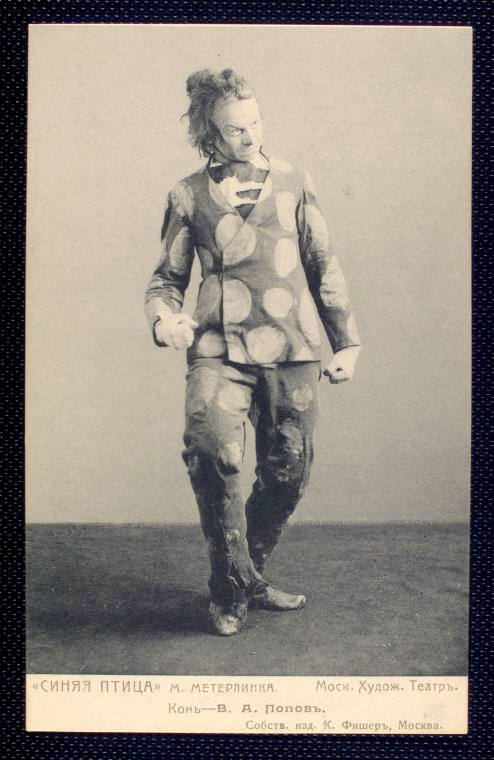 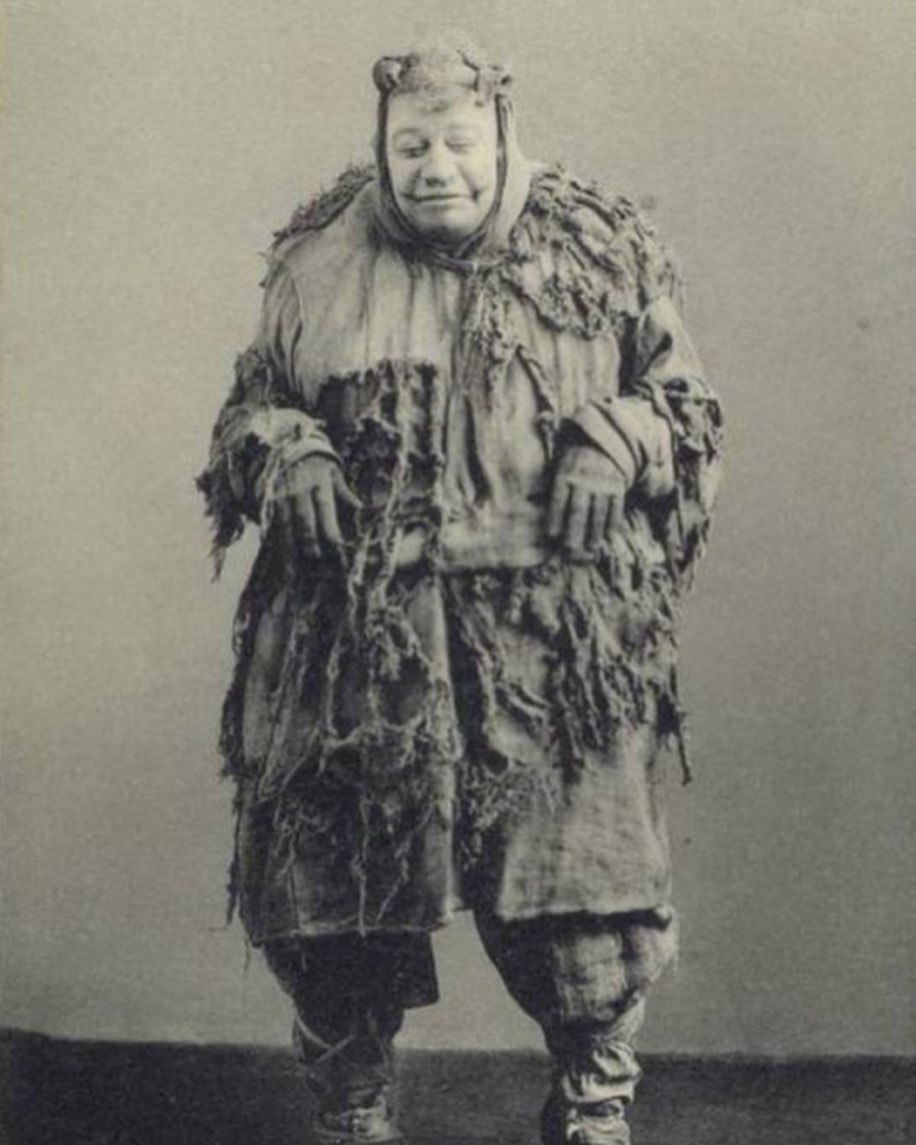 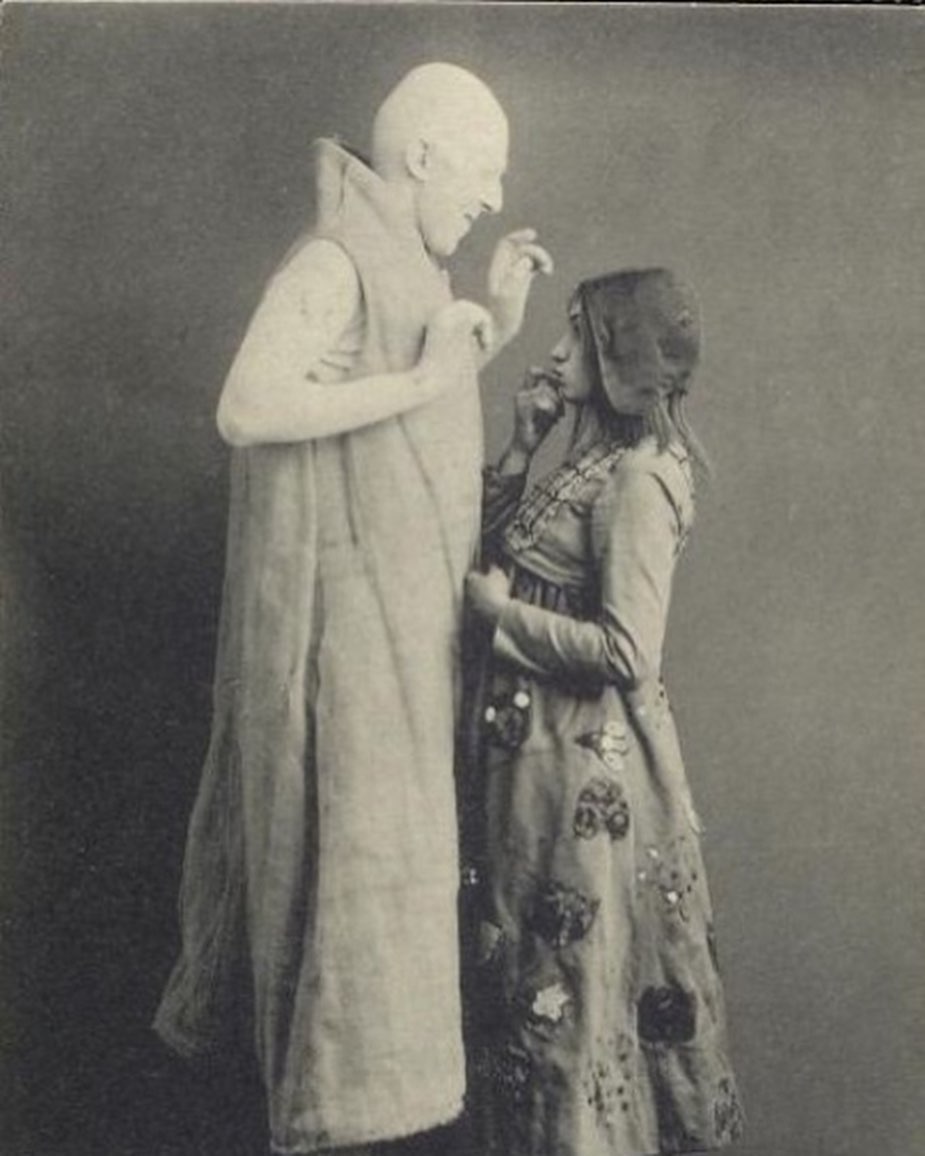 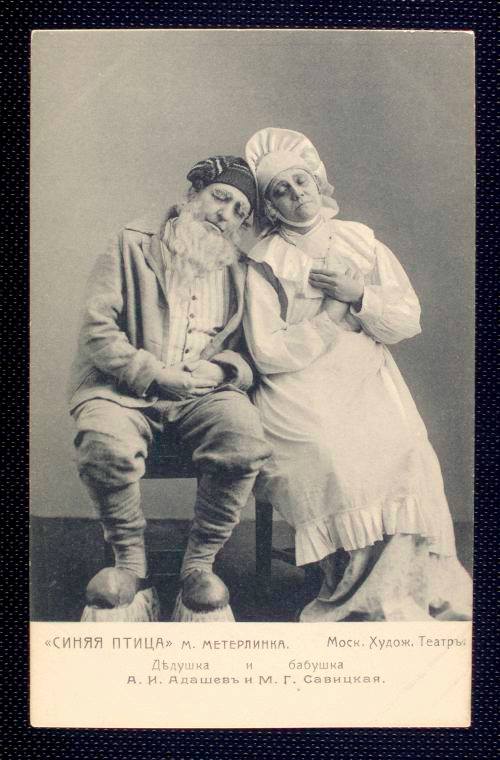 You can read the play here. 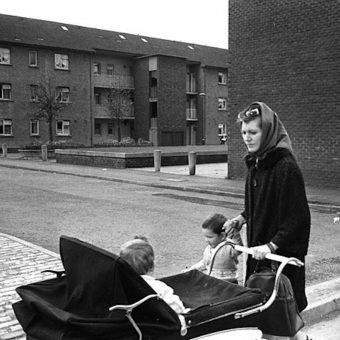 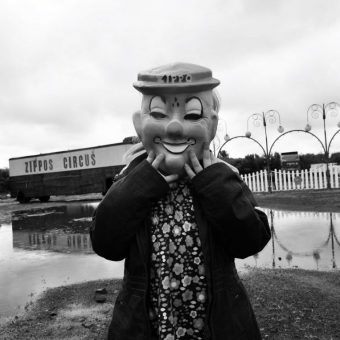 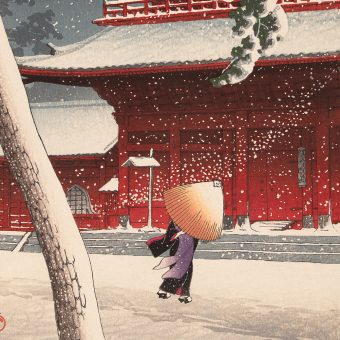 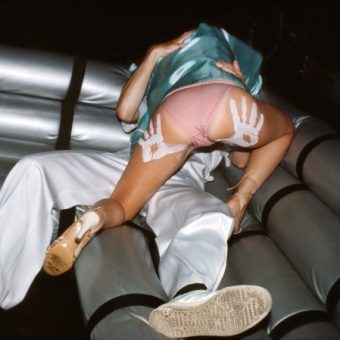