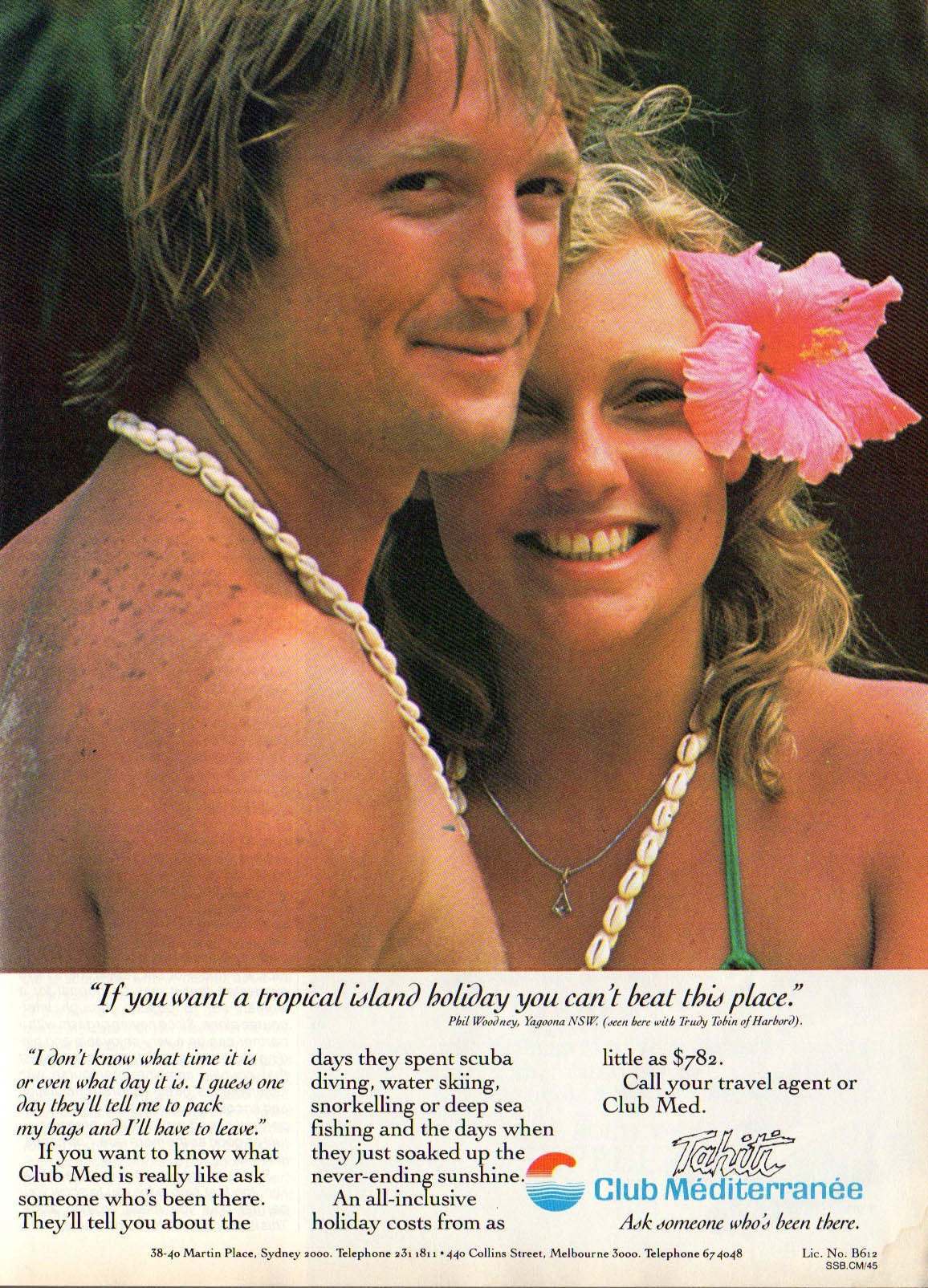 “I don’t know what time it is or even what day it is.  I guess one day they’ll tell me to pack my bags and I’ll have to leave.”

Club Med is perhaps the most notorious example of a vacation getaway which routinely “sold the sizzle” to entice young vacationers with gobs of disposable income to come to their beaches and get lucky.  However, they were by no means the only ones.  The Baby Boomers were a generation of unprecedented numbers, with tons of money to mined by advertisers.  It was the Sexual Revolution, so it was basically a “no brainer” to appeal to the Boomers’ out-of-control libidos.  We’ve touched on this method before in  Bikini Marketing: Travel Adverts of the 1960s-80s, but the topic deserves an additional look….

“Every month, hundreds of girls from Australia and New Zealand arrive hopefully in New Caledonia.  Which is kind of France with shells on…. Girls go there because it’s near, fun…. and the population is two thirds male.  But – those males are mostly French locals.  That’s where you come in.  An English speaking male is priceless here…..”

I can’t help but think a lot of “English speaking males” blew their savings on a trip to New Caledonia for the promise of beachside hedonism, only to travel home broke and disappointed.  It couldn’t have been the paradise for gents speaking English as the advert proclaims.  Indeed, I have a feeling that the girls weren’t exactly turning their noses up at the “French locals”. 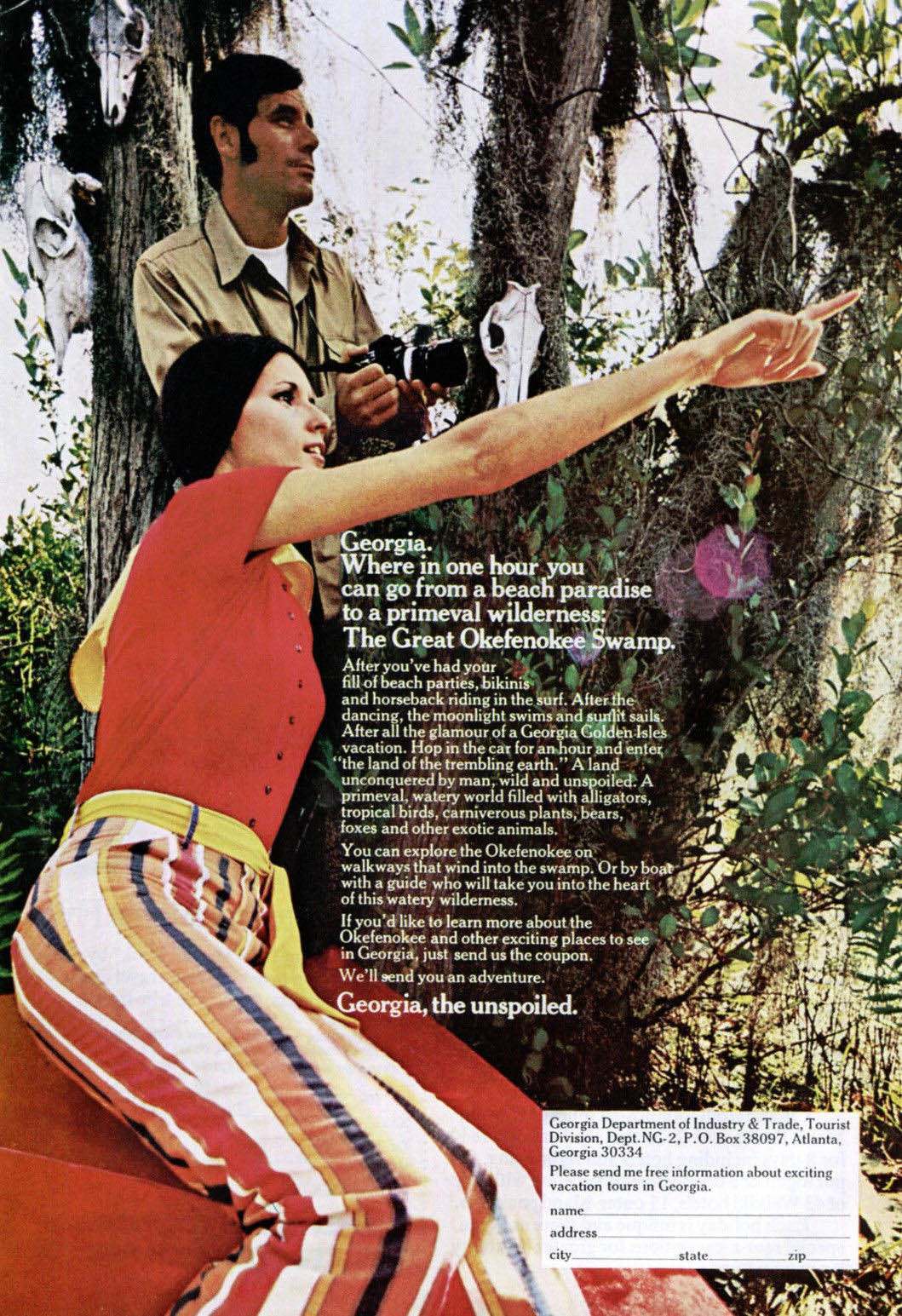 “After you’ve had your fill of beach parties, bikinis and horseback riding in the surf….”

This one’s not near as overt, but deserves props for making the swamps of Georgia somehow seem exotic.  And, for the record, I’ve been to Atlanta many times, and “unspoiled” isn’t the word I’d choose. 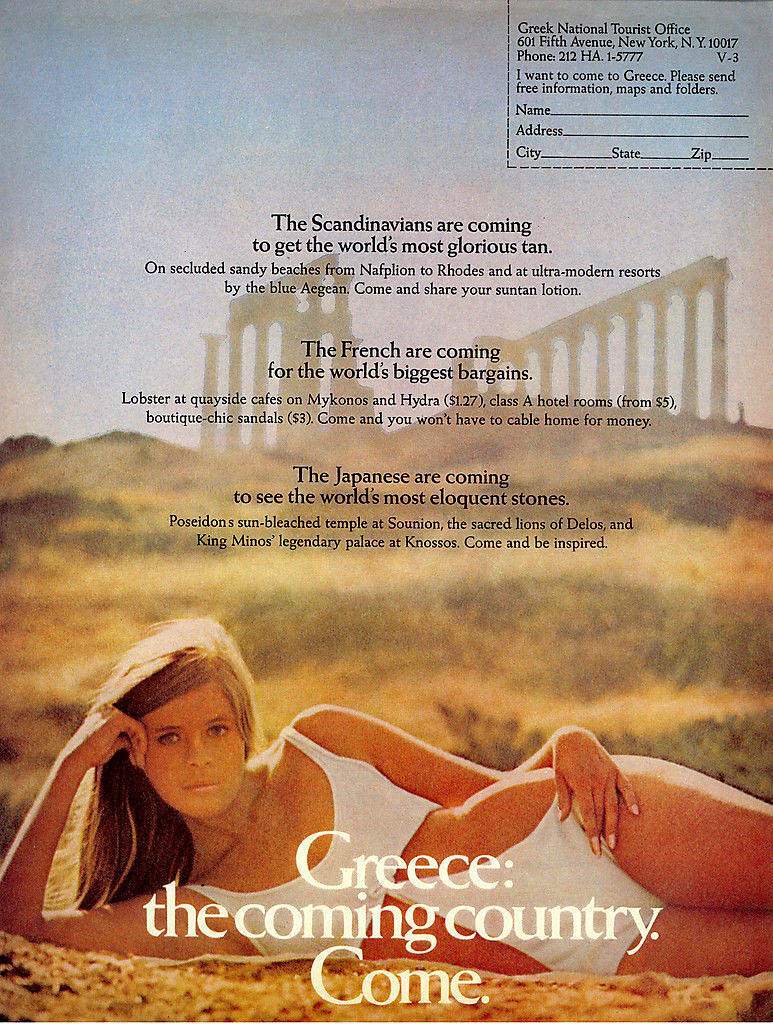 The Scandinavians are coming for a tan, the French come for good bargains (?), and the Japanese come for the statues…. and apparently, the Americans come for hot chicks on the beach. 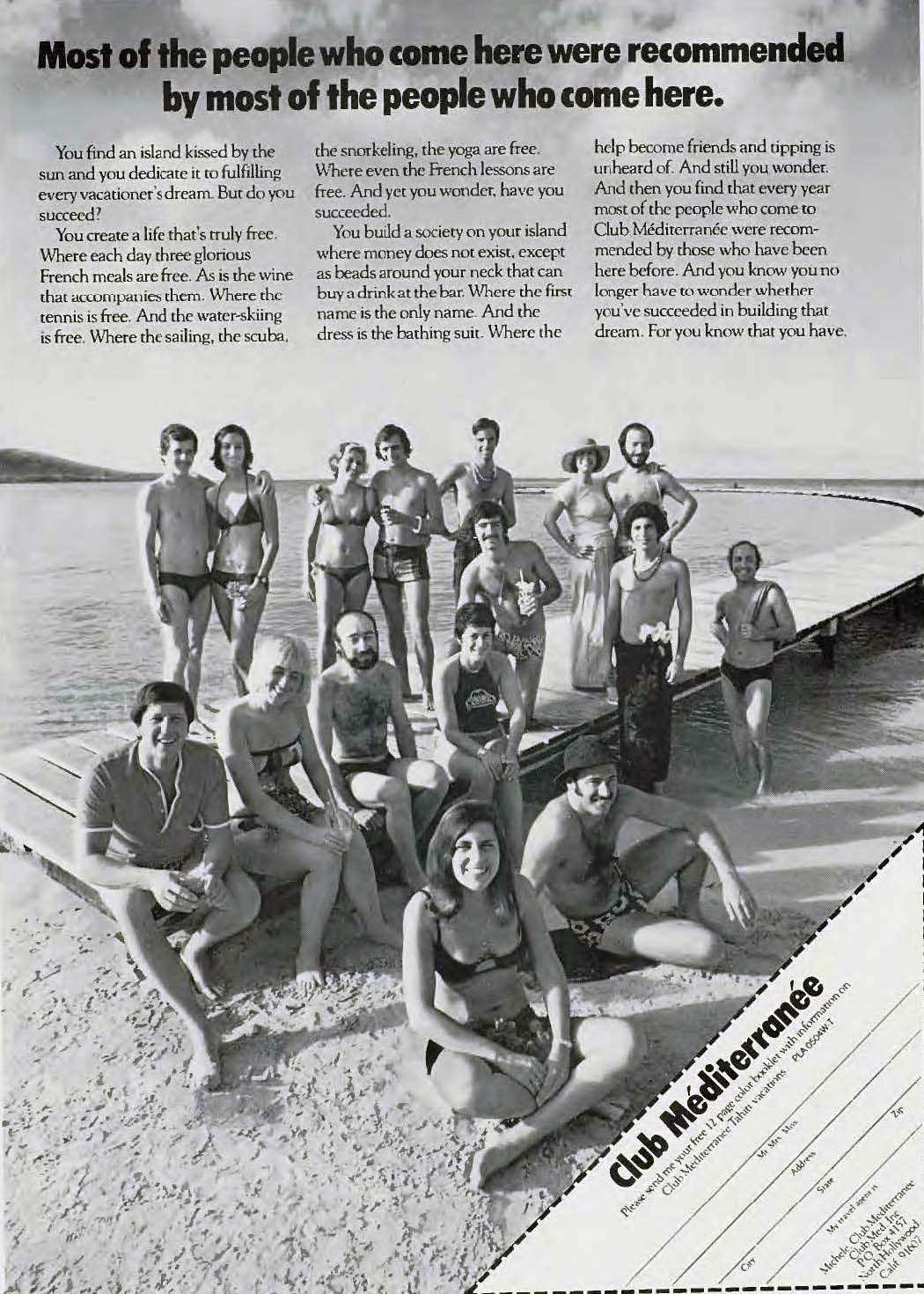 “You create a life that’s truly free….You build a society on your island where money does not exist, except as beds around your neck that can buy a drink at the bar…”

This ad comes from 1974.  It seems the hippie idealism of free love and anti-materialism was still going strong….. yet, one wonders how much this vacation would set you back.  It’s a land “where money does not exist”, yet I’m sure it came at a pretty significant price tag. 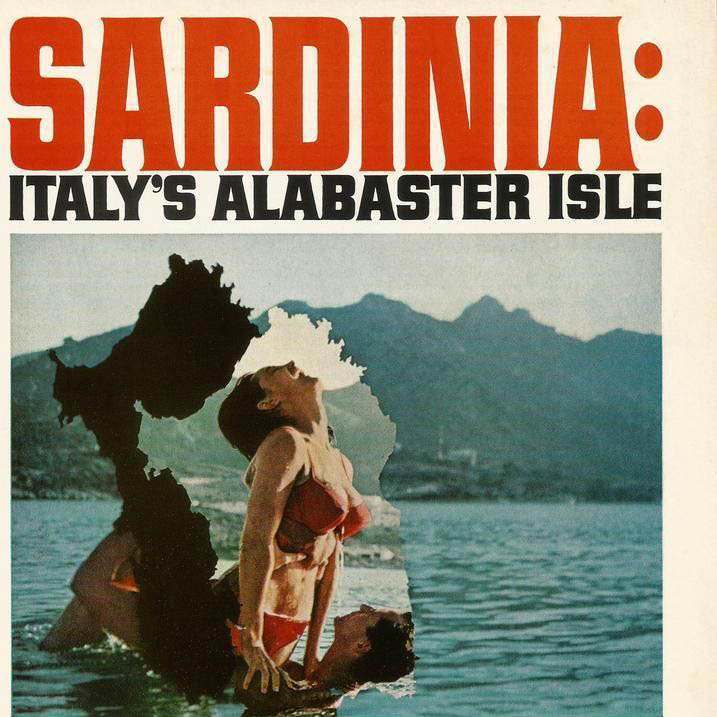 Let’s be clear: there’s nothing at all wrong with selling vacation spots with the promise of sex.  The “romantic getaway” is a time honored tradition.  Yes, Sardinia has ancient archaeology, mysterious caves and beautiful national parks, but to a generation of Boomers in their sexual prime, the best marketing strategy is probably just to show boobs. 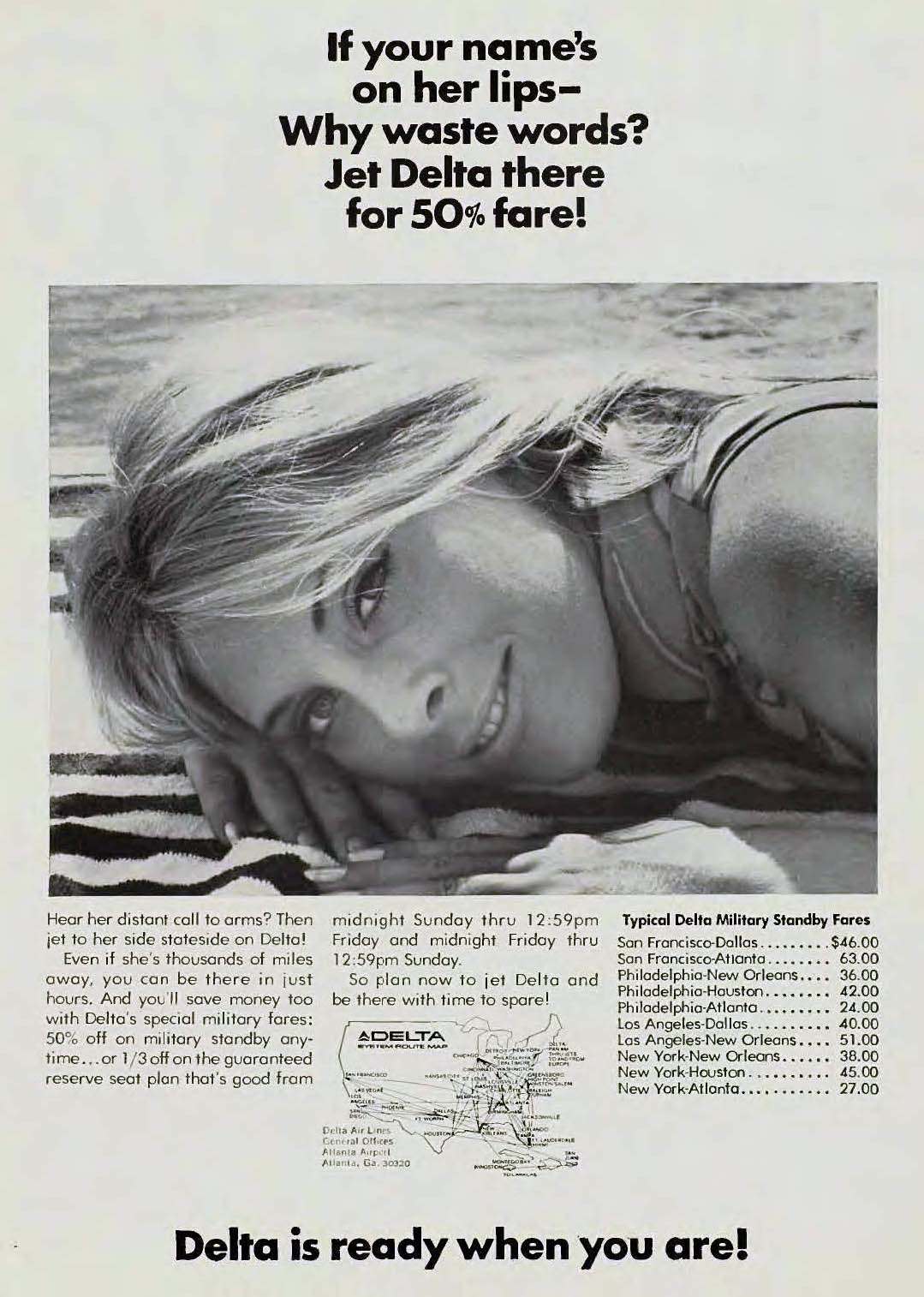 “Hear her distant call to arms?  Then jet to her side stateside on Delta!  Even if she’s thousands of miles away, you can be there in just hours.”

I’m amazed at how directly Delta is implementing the “sex sells” approach, but even more amazed by those standby fares.  This advert is from 1970, so adjusted for inflation, I suppose it’s not that dramatic.  A flight from New York to New Orleans for $38.00 is equivalent to $229 today.  You could probably find a flight not far off that mark, especially considering this is a “military standby fare”. 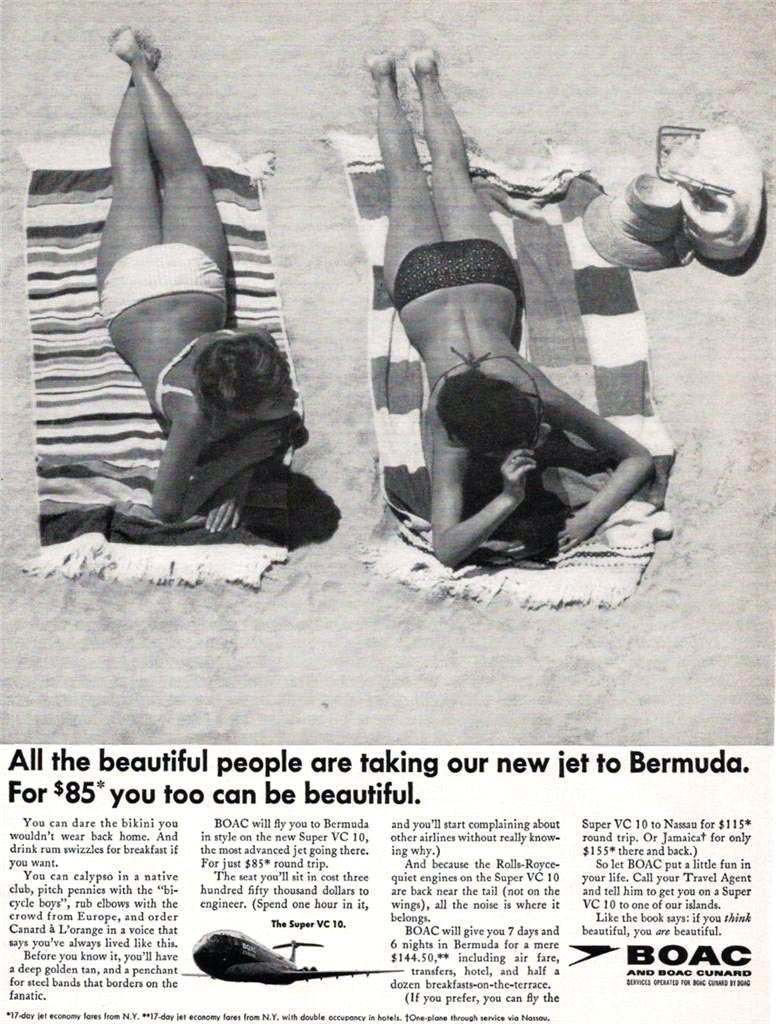 “You can dare the bikini you wouldn’t wear back home.  And drink rum swizzles for breakfast if you want.”

This advert from 1966 offers to take you away from the “proper life” to a land where getting drunk in the AM is A-OK. 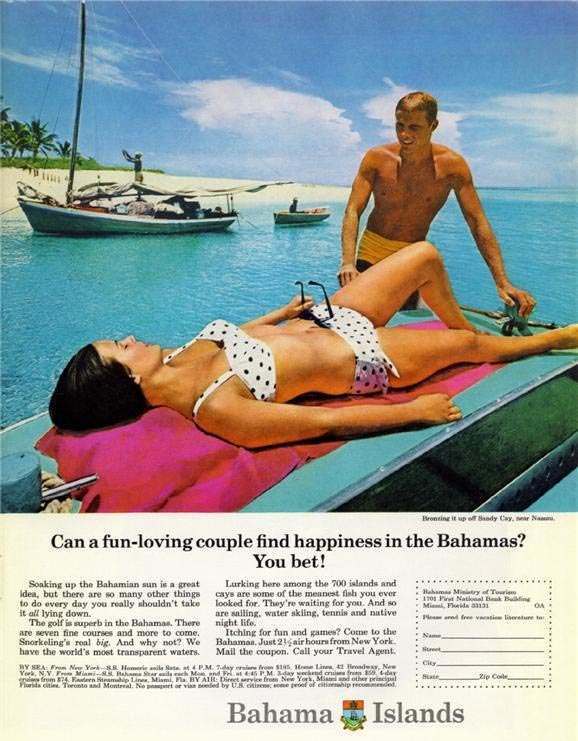 Another 1966 advert.  This one tells of all the fun things to do in the Bahamas: tennis, fishing, snorkeling, golfing,etc.  Yet, the picture illustrates none of those.  It’s all about the babes in bikinis. 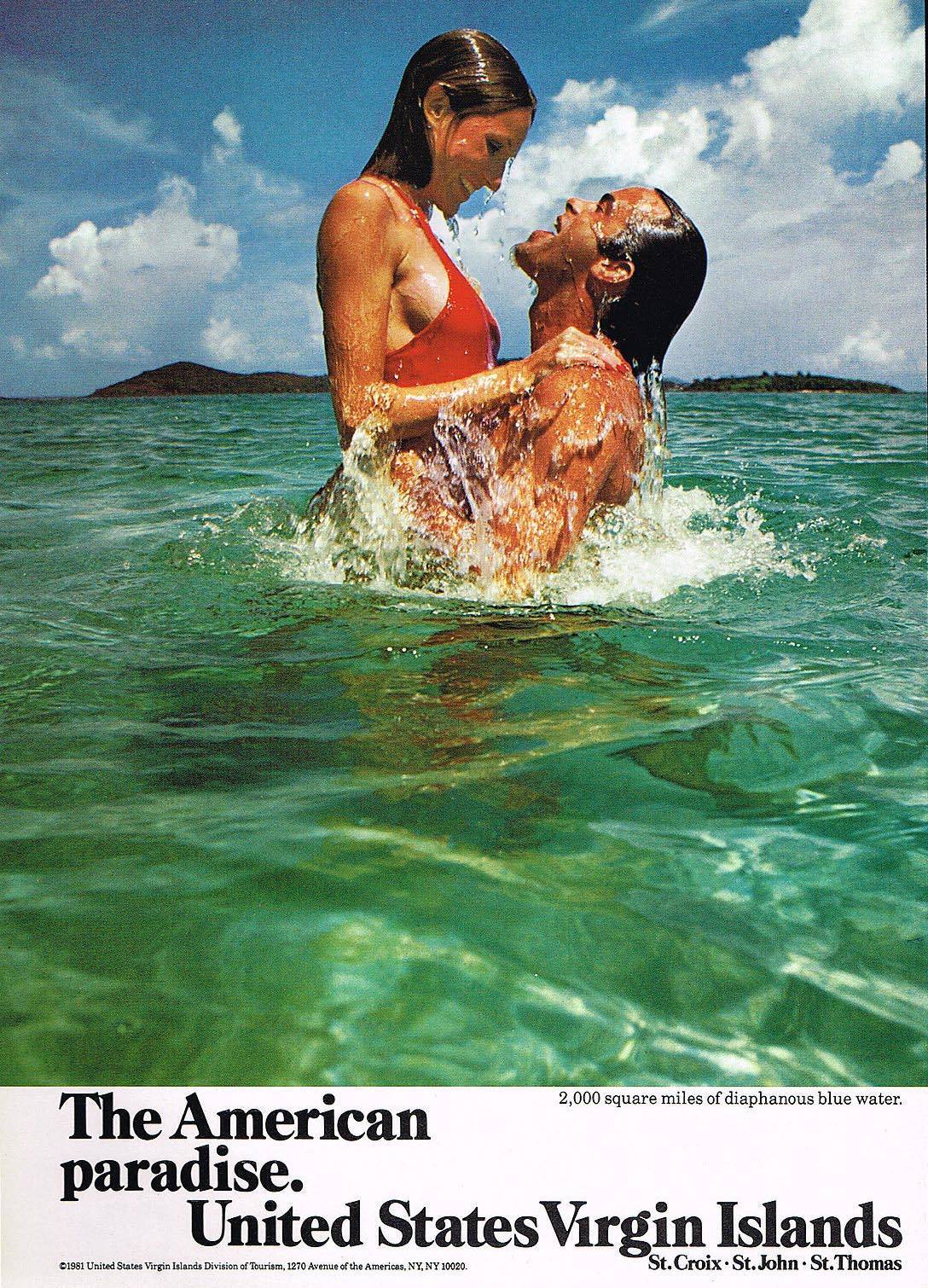 15 years later (1981) and the song remains the same.  The interaction between man and woman is a bit bolder, but the message is unchanged. 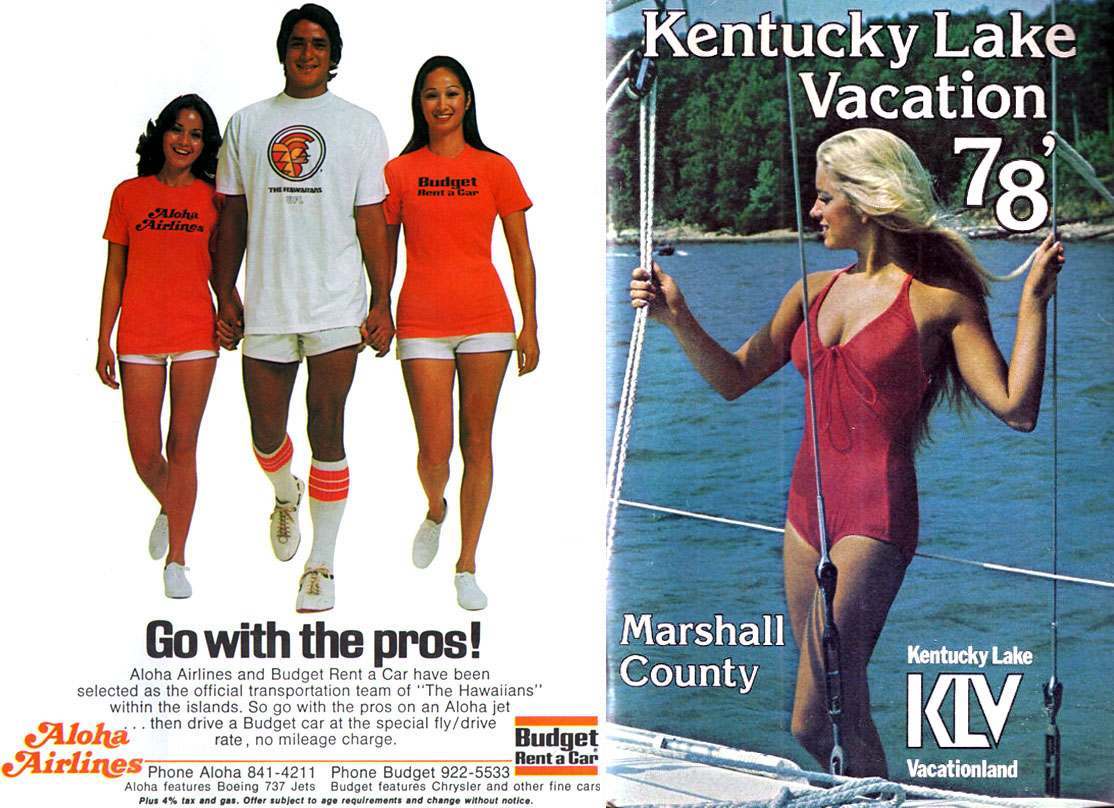 It makes sense to show the promise of meeting young attractive people showing off their bodies for a Hawaiian vacation…. a rural Kentucky lake, not so much.    You’ve got to hand it to Marshall County, Kentucky for selling the sizzle even here – a great example of how ubiquitous this approach was in the 1970s. 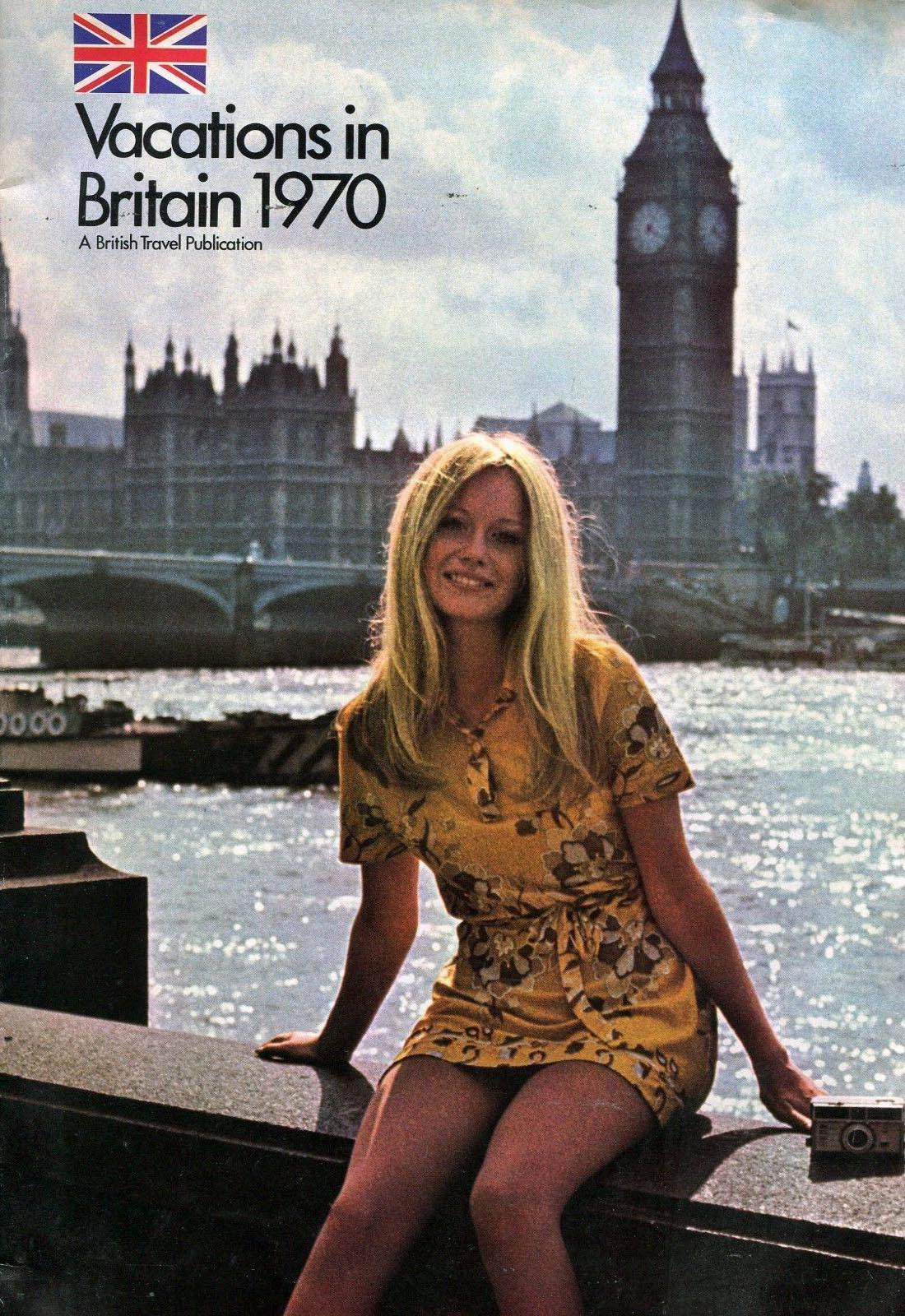 Lots to see and do on a British vacation, but in 1970 it was all about miniskirt watching. 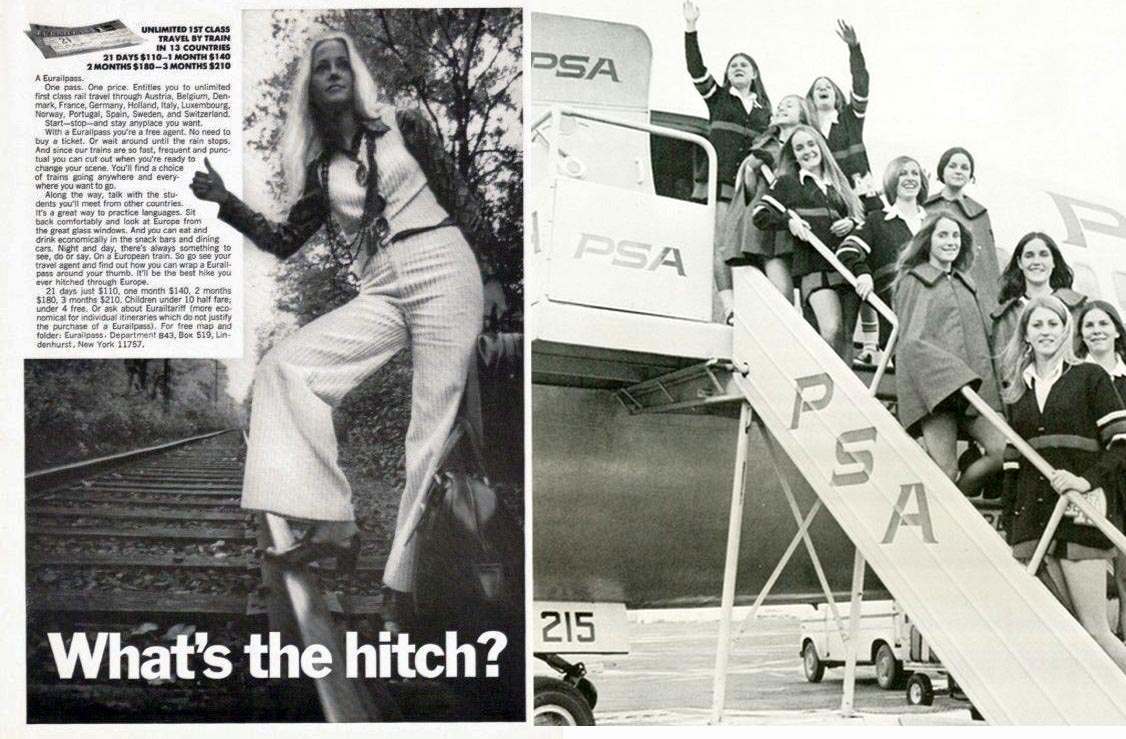