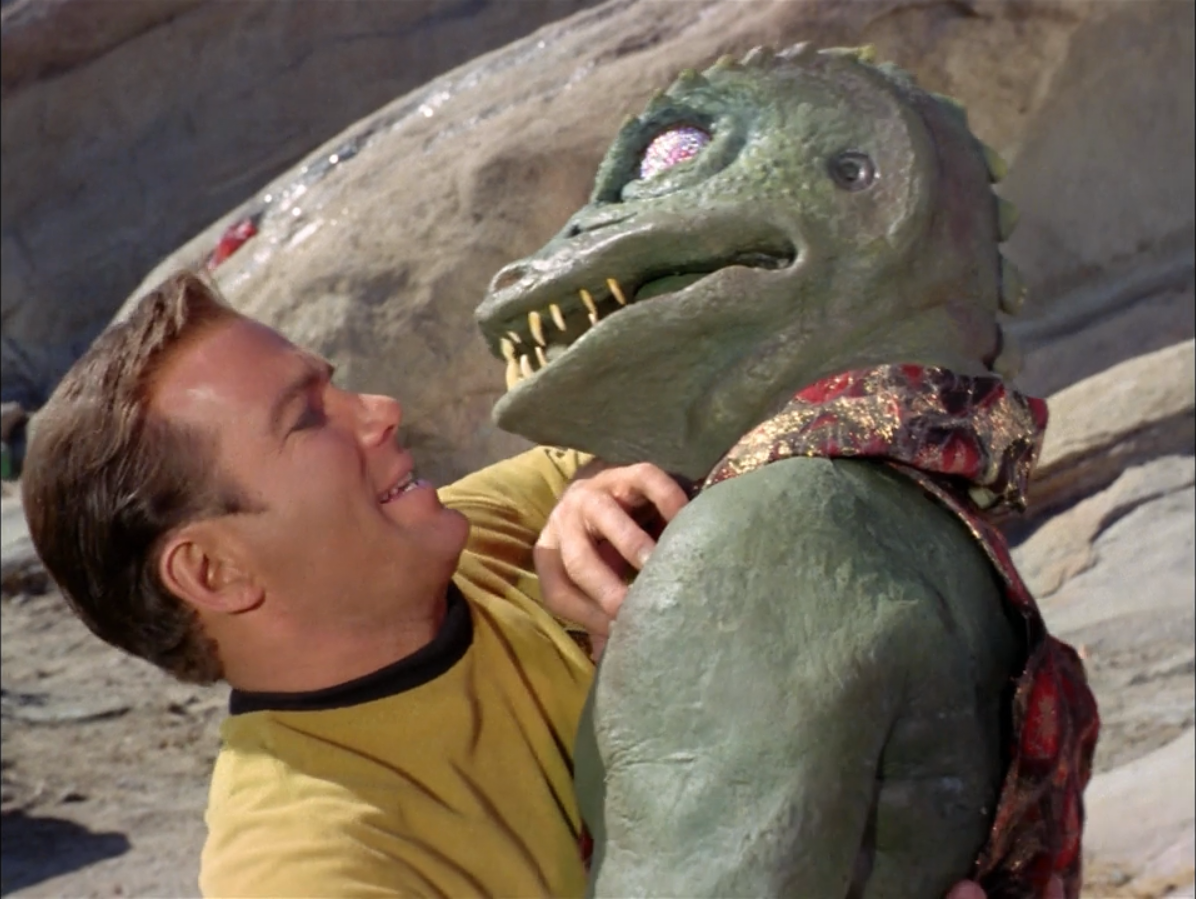 Fredric Brown’s short story “Arena” was first published in Astounding Science Fiction Magazine in 1944.  It concerned a space war between two equally matched forces: the human race and the aliens known as “The Outsiders.” During the last battle of the war, a human pilot named Carson is miraculously plucked from the cockpit of his one-man scouter and transported to an arena overseen by speaking lizard creatures.

Carson  is contacted there by an omnipotent alien who informs him that the space war will be settled here and now. Carson is then forced to combat a deadly alien representative of the Outsiders, a repellent organism called “The Roller.”

If Carson loses this vital contest, mankind stands to be wiped out of existence. If Carson wins the fight, the Outsiders will be destroyed.

Although author Brown was not aware of it when he penned this classic tale during the World War II era, his vignette would one day become — like The Most Dangerous Game — one of the most cherished “stock” stories in science fiction TV, especially throughout the sixties, seventies and eighties.

Below are six memorable variations of the Arena template. 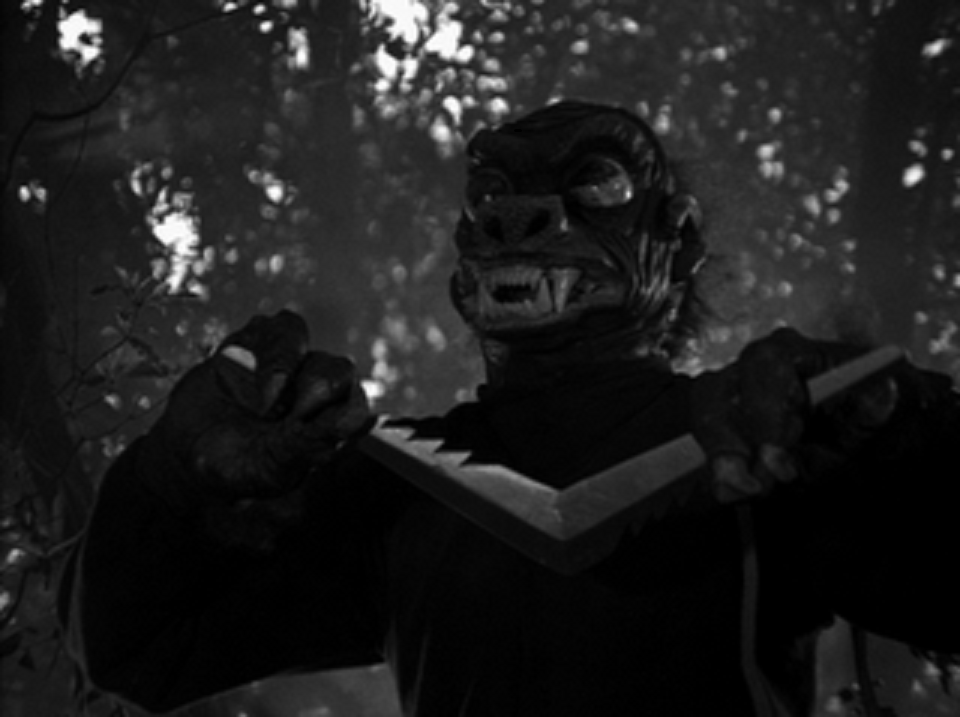 The first variation on Brown’s “Arena” arrived on TV in 1964 when Robert Specht penned his teleplay “Natural Selection” for the anthology series called The Outer Limits.

The episode became “Fun and Games” for broadcast, and producer Joseph Stefano claimed never to have read Brown’s original work at all. Specht’s variation on the genre standard involved Earthlings who were transported away from their lives on Earth  to fight a deadly alien competitor on another planet.

As was the case in the literary tale, the victor in this Outer Limits battle (and his species) would be permitted to survive.  And the loser — along with his people — faced annihilation.

In this case, the battle occurred on a world known as “Andera,” which is a jumbling of letters in the title “Arena.” 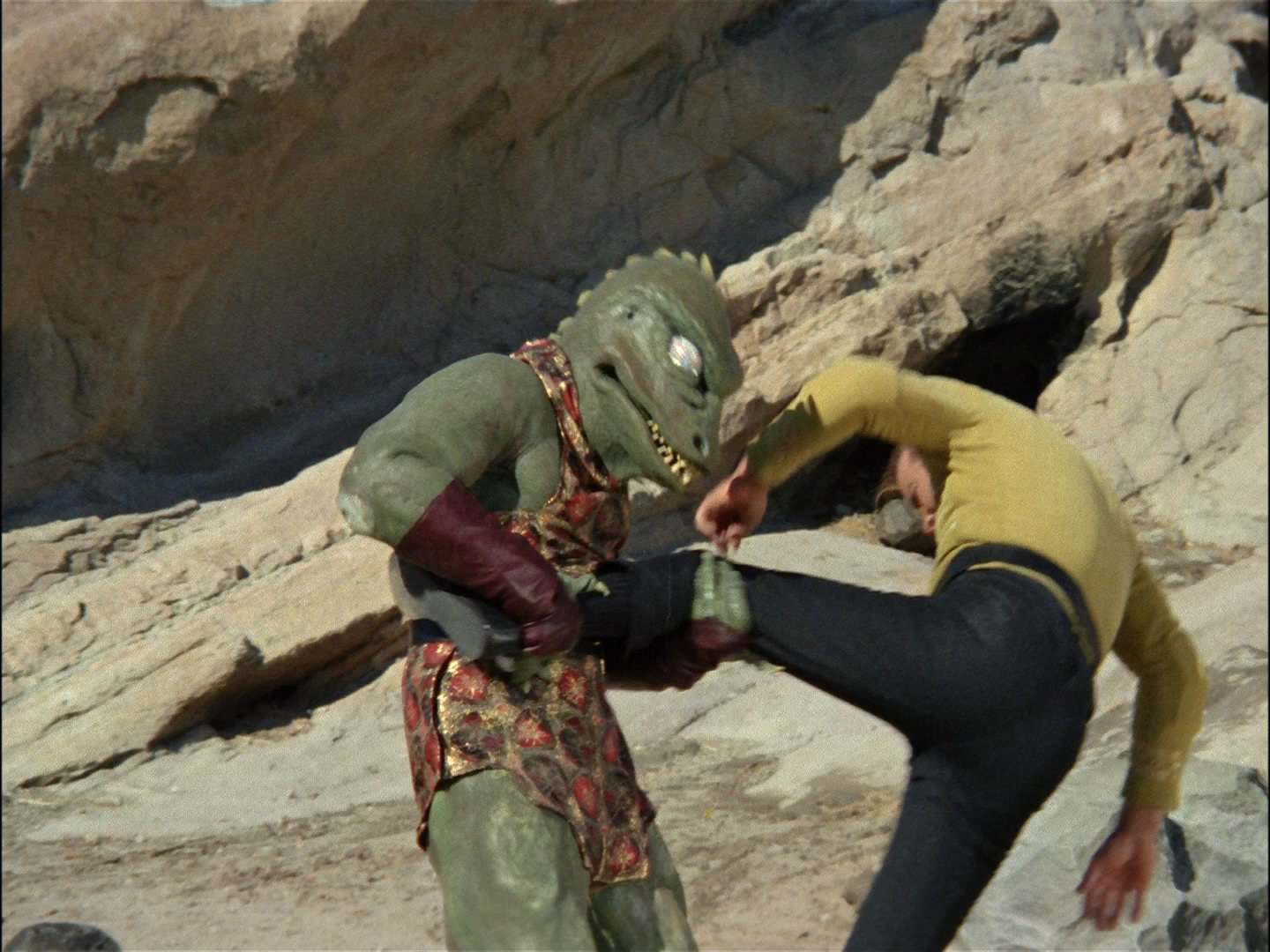 Gene Coon, producer of the original Star Trek realized that “Arena” was too good a concept to pass up during the first season of that classic series in 1966-67. He authored a teleplay appropriately called “Arena” and did the right thing: he actually credited Brown as his co-writer.

During this particular voyage of the starship Enterprise, the stakes for survival had changed from those presented in the original tale. If Captain Kirk lost his battle with a reptilian Gorn captain (after a massacre at the planet, Cestus III), the Enterprise would be destroyed, but humanity would still survive. And vice versa.

At the end of the Trek adventure, a new twist entered the “Arena” mythos.

Where Brown had described survival as a moral imperative, and had seen his protagonist Carlson execute the evil Roller, a creature he likened to an intelligent spider, William Shatner’s Captain Kirk took a higher road. He refused to kill his lizard-like opponent and thereby demonstrated the advanced trait of mercy.

The Star Trek variant on “Arena” also featured another important element in what has become a stock story: the search to build a primitive weapon to defeat a stronger foe.

In Trek, it was Kirk’s efforts to collect raw materials to forge gunpowder and build a primitive cannon. That element also stuck in the memory of many future episode writers. 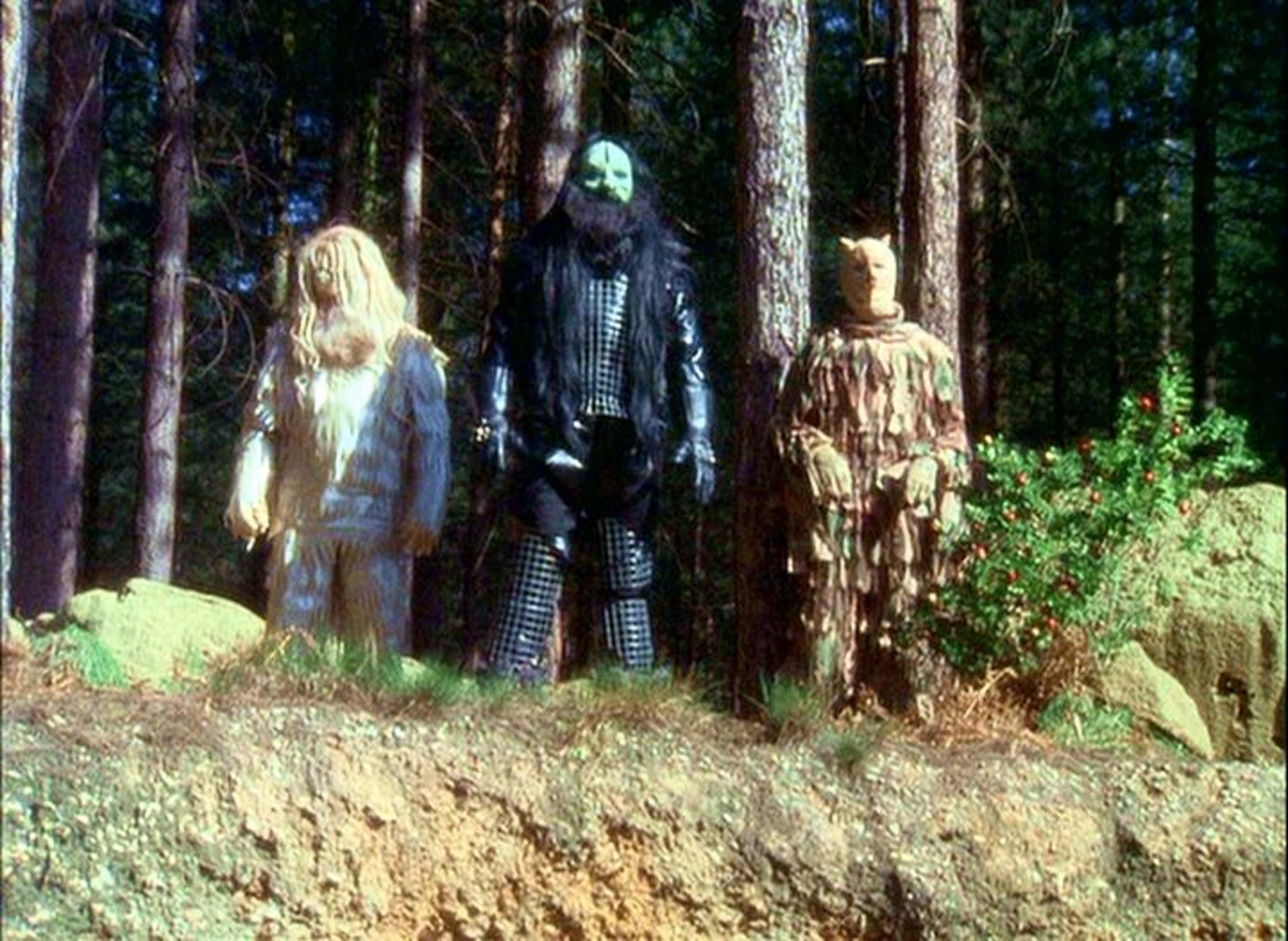 When the “Arena“ story re-appeared on Year Two of the British space opera, Space: 1999 in 1976, and it was deja vu all over again. This time, the story was called “The Rules of Luton.” It was written by Charles Woodgrove (a pseudonym for producer Fred Freiberger) and saw Moonbase Alpha Commander John Koenig (Martin Landau) and Science Officer Maya (Catherine Schell) face off against three alien criminals when they committed a so-called “crime” on the planet Luton: eating a berry. Yes, it was a planet of intelligent vegetables and eating a berry was considered murder.

On Space: 1999 there was no threat to the galaxy, or even Moonbase Alpha. At stake instead were merely the lives of Koenig and Maya if they lost. Interestingly, the three bad aliens (a teleport, an invisible alien and a super strong fella), were not the real bad guys at all. Instead, the supervisors of the arena became the primary antagonist, because of their unquenchable blood lust.

Again, this was a new twist in the old paradigm. The villainy had shifted from those the heroes had to fight against to those who were orchestrating the fighting. Perhaps this is symbolic of 1970s post-Watergate anti-authoritarianism.

Also, instead of building a makeshift cannon to defeat his foes as Kirk had done, the resourceful Koenig made a bolo. 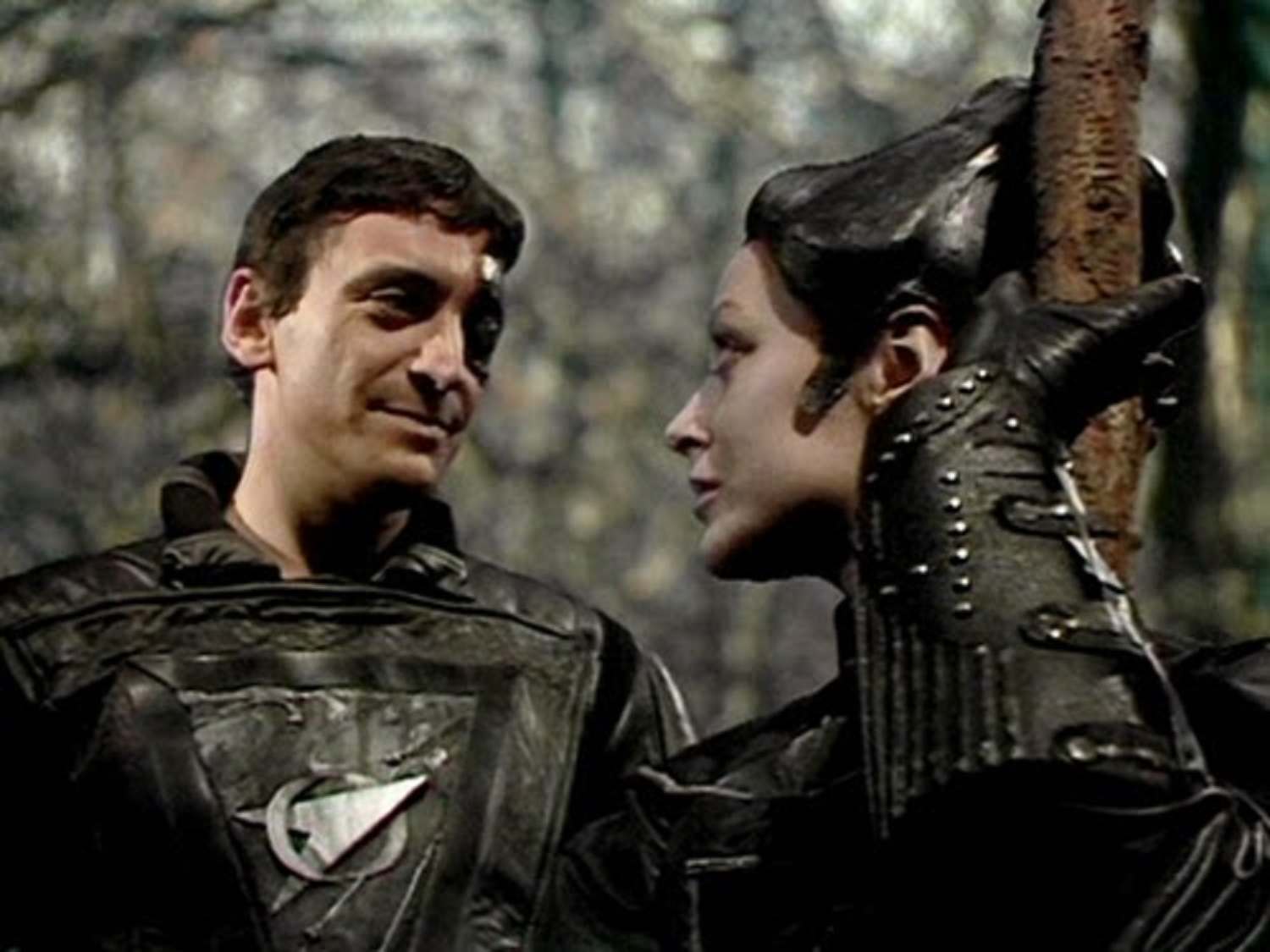 On Star Trek it was the Metrons. On 1999 the Lutons. Here it was a Keeper called “Giroc” and a guardian called “Sinofar.” Sinofar and Giroc’s people had destroyed all life on their planet centuries earlier in a useless war, and were now doomed for eternity to teach other battling humanoids the same lesson about self-destruction.

In this case, Blake and his pilot Jenna (Sally Knyvette) forged primitive lances and spears out of the local brush, replacing Star Trek’s cannon and Space: 1999’s bolo.

Blake also followed the example of Kirk and Koenig before him, refusing to kill his enemy.

However, in typically cynical fashion (the rule on Blake’s 7 rather than the exception…), Blake allowed Travis to live because he knew he could beat Travis, not out of any glorious human instincts or quality of mercy. 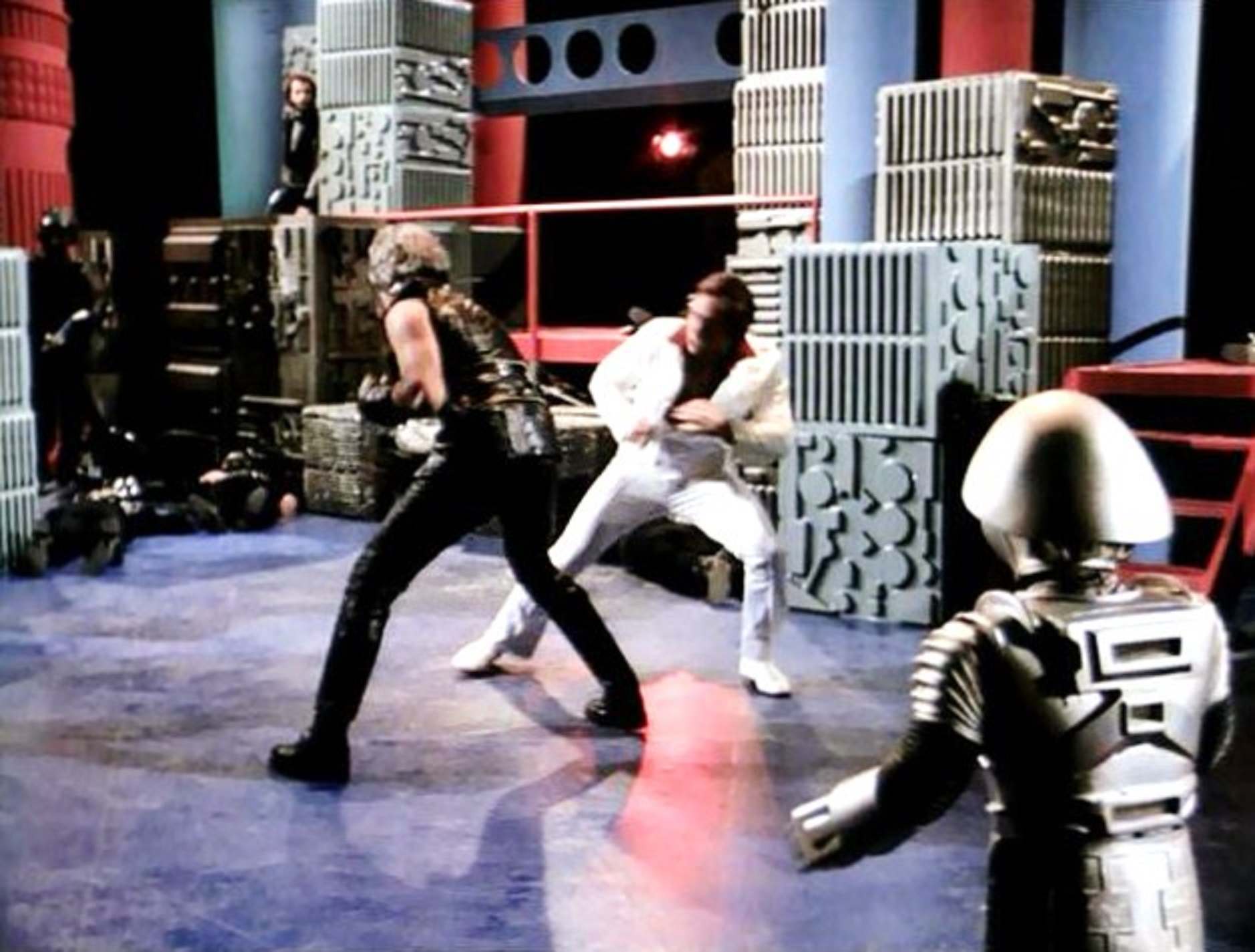 Gil Gerard’s out-of-time hero — a paragon of American Exceptionalism? — ended up in an arena to fight a villain called the Traybor (William Smith) in an episode of Buck Rogers titled “Buck’s Duel to the Death.”

There was no superior overlord this time around, but the battle in an arena still decided the fate of a society…this time an alien one.

Here, the Traybor could shoot bolts of electricity out of his hands, and Buck had to utilize Twiki as a kind of inhuman shield who could absorb and reflect the lightning bolts. In the end, Buck won the contest with the warlord and freed the planet, telling the people that democracy was in their hands, not the Traybor’s…or his. 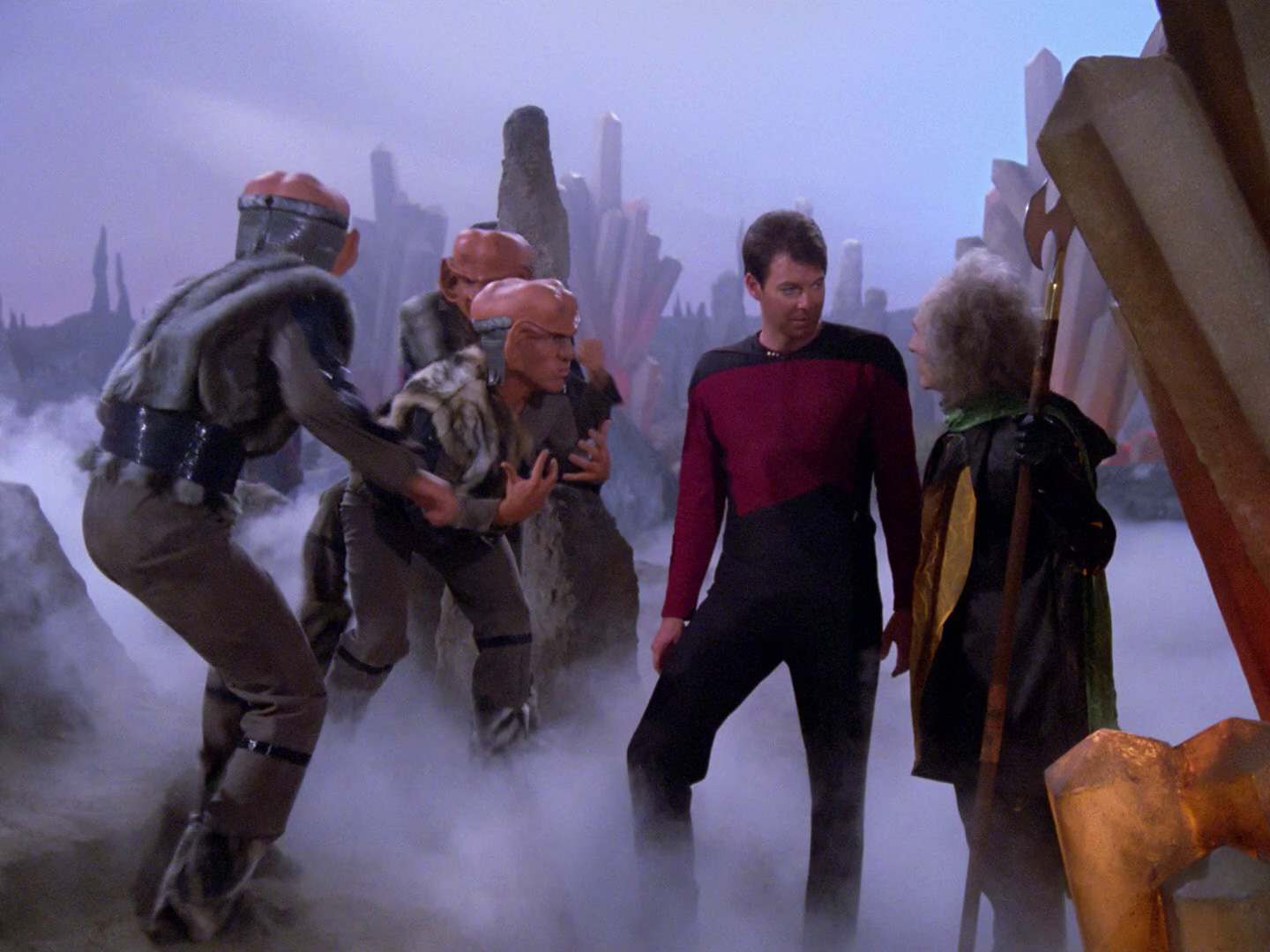 Star Trek eventually regurgitated Brown’s “Arena” concept…again. The fourth episode of Star Trek: The Next Generation vetted an (uncredited…) re-make called “The Last Outpost.’ This time, the avaricious Ferengi (in their first appearance) subbed for the Gorns, and the Metrons were replaced by an old, cloaked alien from the mysterious T’Kon Empire, called “Portal.”

As before, the Federation and an enemy were locked in hostilities over “ownership” of territory or equipment, both ships were paralyzed in space by the superior race, and the answer to the riddle was to be found on a planet below. Portal stood in judgment over the combatants, and tested them for worthiness.

I hasten to add, there have been cheesier variations of of the “Arena” story, but none that ended as lamely as this installment. Riker beats the Ferengi simply by quoting the Chinese philosopher Sun Tzu to Portal. This was also the second time in four episodes that Picard had surrendered the Enterprise, the Federation’s flag ship.

Other examples to consider (or reject…) as being related to Brown’s “Arena” might include the Doctor Who (1963 – 1989) serial “The Sontaran Experiment,” which sees the Fourth Doctor (Tom Baker), battle a Sontaran for the lives of a stranded team of human astronauts, and “That Old Black Magic” on Farscape (1999 – 2004).  In that episode, John Crichton (Ben Browder) and his nemesis Crais (Lani Tupu) had to engage in personal combat at the whim of a sorcerer called Maldis (Chris Haywood).

The core of the timeless “Arena” story — the idea that is resurrected over and over again across the decades on genre TV — is a powerful one on an emotional level, which perhaps explains its longevity. Human beings are (apparently…) intrinsically violent creatures, and our violence makes us do stupid things. In the “Arena” template, aliens — sometimes with good motives, sometimes not — make us face the consequences of our violent stupidity. A superior force, like God in some fashion, stops us in our tracks and makes us confront the truth about our brutal nature.

Perhaps there is also an element of wish-fulfilment in the idea of two enemies battling it out personally, rather than with the might of governments and soldiers behind them. Instead of millions dying in a conflict organized and orchestrated by a few planners, only representative leaders would face physical harm. I think we’d like to believe things could be so simple; that the fate of the universe could be settled by a well-delivered punch, or a make-shift cannon with home-made gunpowder.