In Stanislew Lem’s 1961 novel, Solaris, one character observes that humans have no need of other worlds, and that our world, Earth will “suffice.”

Well, Lem’s writing suggested that man had not yet explored the “dark passages” of his own psyche, and therefore any attempt to explore other worlds would butt up only against his own closed mind.

Uniquely, some of the most admired and thought-provoking science fiction films of past decades have adopted the same creative tack.

When the protagonists in these daring cinematic visions travel to the farthest regions of space and existence itself, they meet not with something truly alien, but with something, instead of Earth.  The “alien” is wrapped up not in the unknowable, but the familiar objects and symbols of home.

With that thought in mind, here are six films that embarked upon “the ultimate trip” only to end up, finally, bringing audiences firmly back down to terra firma.

In “Jupiter and Beyond the Infinite,” the last movement of the Stanley Kubrick film 2001, astronaut David Bowman (Keir Dullea) travels into the Monolith and loses consciousness there. When he awakes, he is in a Victorian sitting room — also known as a “renaissance” room — and it is there that he will spend the rest of his days.

David seems to grow old very quickly (or time moves at a different speed in this realm…), until he is confronted with the Monolith once more.  There, in the sitting room’s bed, he faces his destiny, and evolves, it seems, into the Star Child. The renaissance is therefore his; his age of new growth, activity, or rebirth.

But, on a literal level, this prelude to evolution takes place not in space, not on distant Jupiter, not even in an alien laboratory as we might recognize it.  Instead, all the trappings of humanity are there: food and drink (red wine), statuary, furniture and the like.  To move forward, David regresses to a place of the past; a regal, well-decorated room evocative not of alien-ness, but of our own long traditions and history.

At the end of the universe, at the end of the existence, therefore is something very human; something of Earth that we immediately recognize, the movie tells us.  We don’t get to see the aliens or understand them.

Instead, we get a comfortable bed, a glass of wine, a last supper, and a second chance.

The  Andrei Tarkovsky adaptation of Lem’s novel includes the dialogue I excerpted above, concerning mankind not wanting to meet something alien, but rather something human, something that reflects who he is…a mirror.

Here, the alien world, Solaris — a vast, strange ocean — changes radically at the end of the film.  Psychologist Kris Kelvin (Donatas Banionis) descends to the planet after his brain waves have been broadcast at it.  When he arrives on Solaris’s surface, an island rises from the depths and re-shapes itself into the home of Kris’s father, on Earth.  Kris encounters his father there, and falls to his knees, weeping. He is glad to be home.

But of course, it isn’t really home.

Whatever strange life-force exists on Solaris has registered, instead, Kris’s desire to be confronted with the familiar, not the strange, and accommodated this desire.  The entity — the real alien — is left unexplored, and no contact is made.

So Kris shows relief at the sight of a familiar landscape, his ancestral house, his father, and his pet dog.

Instead of discomforting infinity, man is confronted among the stars with comfortable symbols of an earthbound existence. 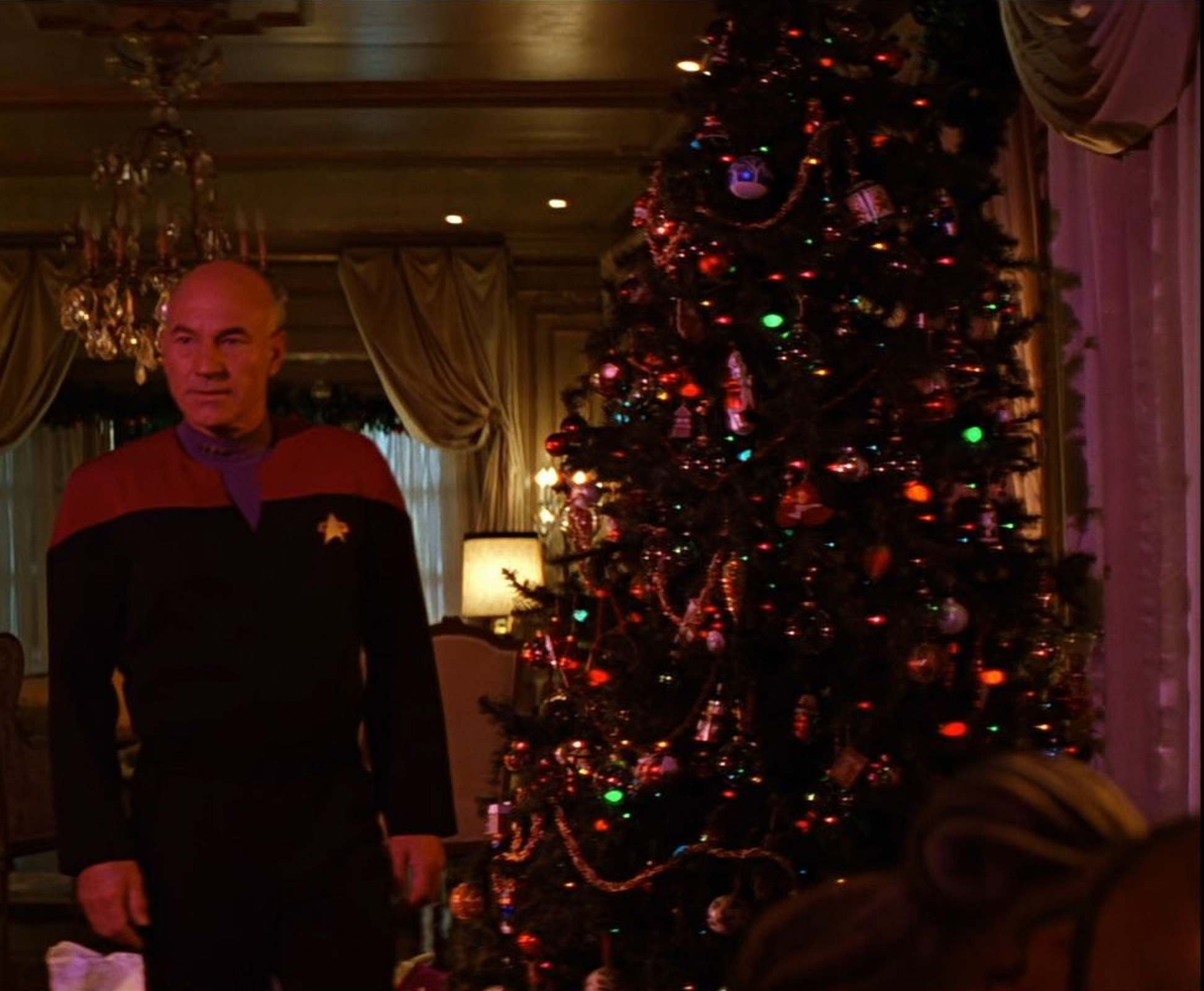 In the first Star Trek film to feature the cast of The Next Generation (1987 – 1994), Captain Jean Luc Picard is transported to a transcendental realm, the Nexus, where thought becomes tangible reality. The Nexus is described, by Guinan (Whoopi Goldberg) as a place of total bliss.

Late in the story, Picard is subsumed by the Nexus, and when he awakes inside it, finds himself not in a world beyond imagination, a world of alien wonders, but one very grounded in old Earth customs.  Specifically, he finds himself in a Victorian home decorated for Christmas, with a wife and children nearby, doting on his every word and action.

At the end of the Universe lies the beginning of…traditional holiday celebrations?

The point here, perhaps, is that the Nexus has shown this accomplished space farer that what he really desires is not new territory to explore, not alien contact, but the human touches he has not allowed himself: a family, a home, a legacy beyond being a starship captain.

Again, something alien has revealed not itself, but a mirror for man.

In this film, based on the novel by Carl Sagan, Jodie Foster plays SETI scientist Ellie Arroway, the first person to contact an alien life form and visit an alien world after traveling through a wormhole to a distant galaxy.

Importantly, the alien landscape is depicted as a Pensacola Beach in Florida (one that Ellie drew as a child…), and the alien appears not in its true (mysterious) form, but as Ellie’s deceased father, Theodore (David Morse).  He speaks gently to her, like her father.

Once more, something truly alien is not depicted in a visionary science fiction film, and all the trappings of the alien’s power and identity are a reflection, instead, of humanity and its home in the universe.  We are treated as children, literally, with aliens taking the form of a parent.

Here, when Kris becomes one with the mysterious, living world of Solaris following the destruction of a space station, he does not return to a family home on Earth, but rather finds himself in an afterlife of sorts; one that includes his doomed, suicidal true love, Rheya (Natasha McElhone).

Kris and Rheya find each other in an after-life representation of his urban apartment on Earth, in a kitchen, specifically.  They realize there that they have eternity to spend together.

Once more, the thing really beyond human concept and comprehension — the alien life of the planet Solaris — is not truly confronted or even encountered.  The characters are satisfied, instead, with something human: a love-affair in a familiar setting, but in a place where “death shall have no dominion” (per Dylan Thomas). 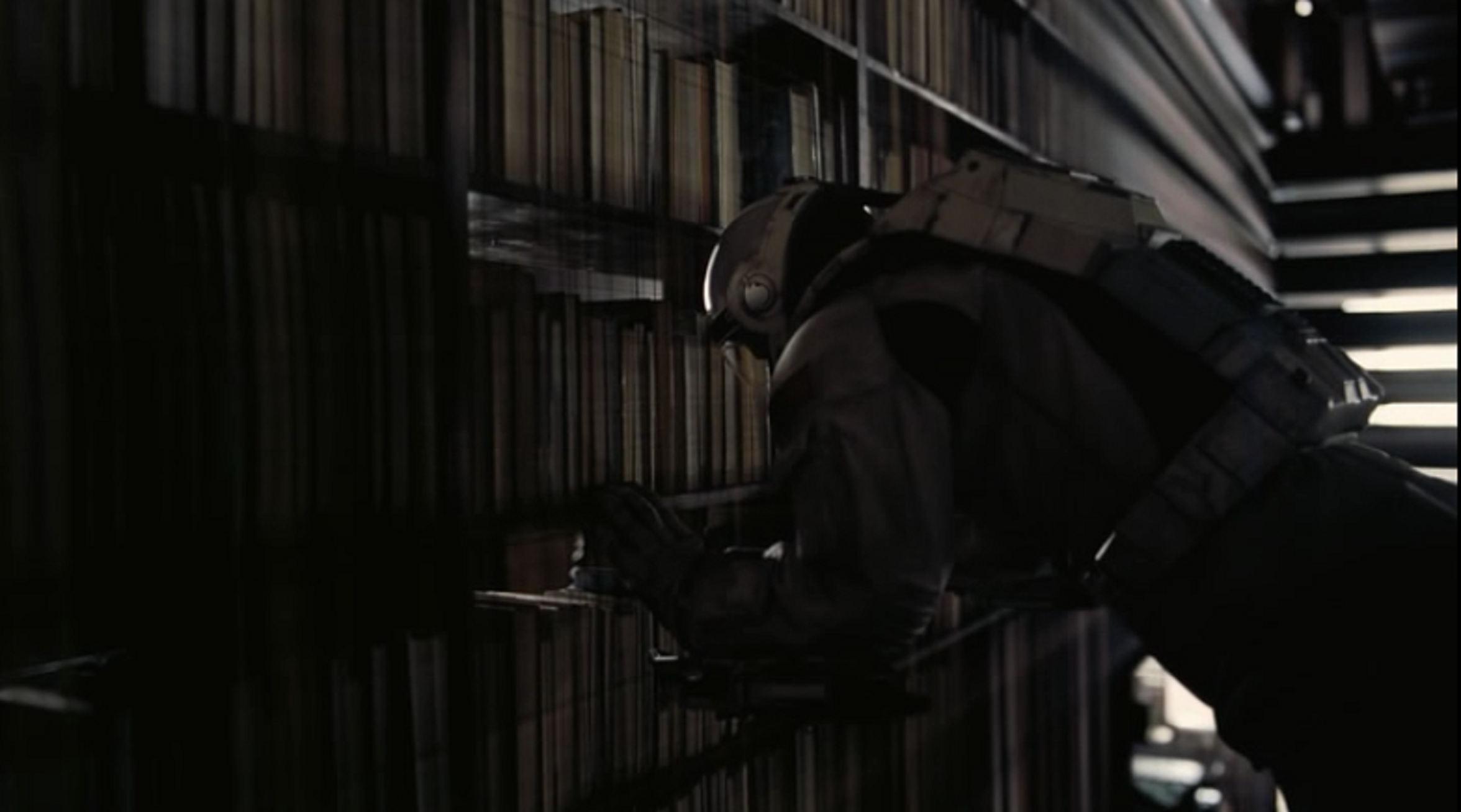 Christopher Nolan’s epic metaphysical adventure takes its astronaut hero, Cooper (Matthew McConaughey), through a wormhole and into the heart of a black hole, Gargantua.  There, it introduces him to life in five dimensions.  The past and future there are just “canyons” for him to climb.

But what Cooper finds in the black hole, however, is not a world beyond his comprehension, but one that recalls, specifically, his humanity.

Cooper finds himself in a 5-D representation of his daughter Murphy’s bedroom — in his farmhouse on Earth — where he can communicate information crucial to her, and to the very survival of the human race.  From behind a book-shelf, he interacts with her using Morse Code, Binary Language and gravity waves.

Again, a human being’s journey goes beyond the bounds of time and space as we know it — to the infinite and beyond — but resolves with a familiar, Earthbound landscape or setting: in this case, a bookshelf, a bedroom, and a re-assertion of human family bonds.

What all these stories reveal, perhaps, is our inability, as creators and artists to truly conceive of something outside of our experience, something alien.

Or perhaps these films represent the human desire to – at the end of the universe – find that the answers to all our questions depend on what we bring with us there: our humanity.