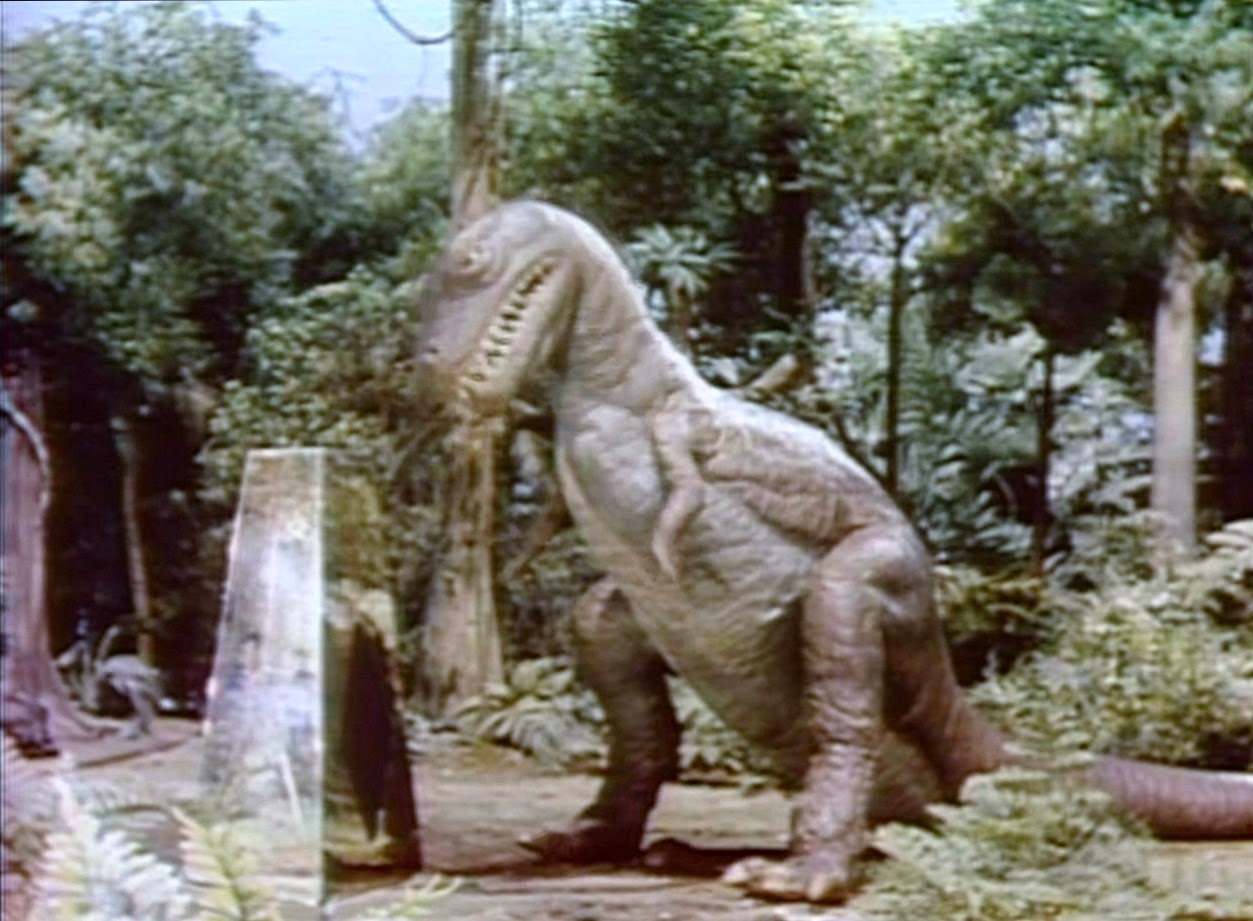 Kids of the 1970s had a real treat in store for them as they dug hungrily into their bowls of Life Cereal and started the day because all three major American TV networks — ABC, CBS, and NBC — jumped on the same bandwagon at the same time: prehistoric entertainment. 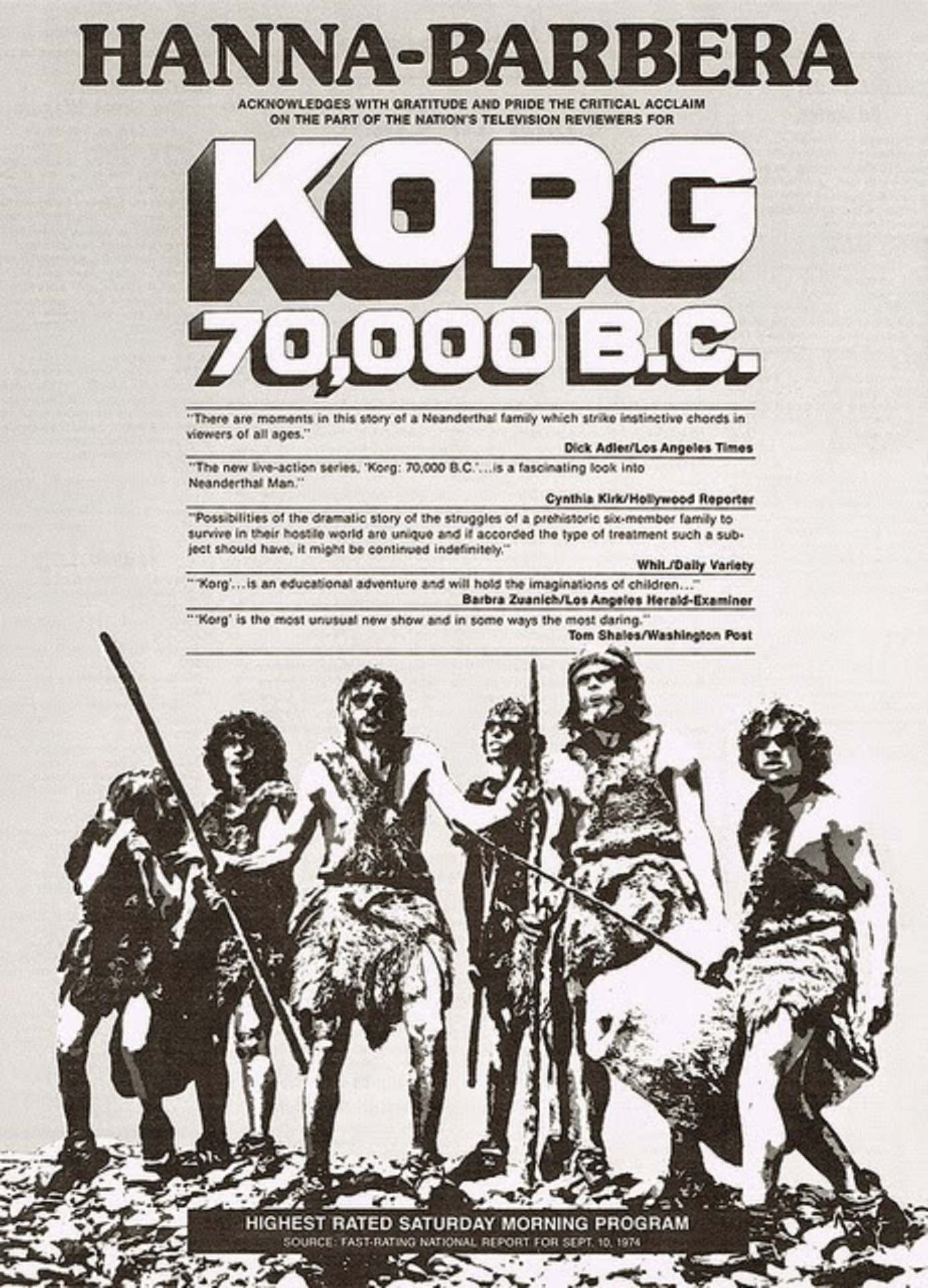 Although only one of these series — Land of the Lost — achieved pop culture immortality, children of the 1970s probably still remember the other two, in no small part because so much merchandise was produced for them.

Here’s a look back at the nostalgic prehistoric entertainment of 1974.

The series follows the adventures of a Neanderthal family headed by the “great hunter” Korg (Jim Malinda). The others in his tribe included his wife, Mara (Naomi Pollack), the hunter Bok, who is also Korg’s brother (Bill Ewing), daughter Ree (Janelle Pransky) and sons Tane (Christopher Man) and Tor (Charles Morteo).

Korg ran from September 7, 1974 to late August 1975 and each episode of this half-hour concerns family values. Specifically, the stories are about people helping each other in a dangerous world. On Korg, the Neanderthal family speaks perfect English, but grapples with the natural world.

Before the series ends, Korg’s brood contends with a solar eclipse (“Eclipse of the Sun”), learn how to use a lever to free family members from a cave-in (“Trapped”), and builds a raft when the family must traverse a body of water to find animals to hunt (“The River.”).

Burgess Meredith contributes opening and closing narration to the series, and the avid Korg fan could find board games, comic-books by Charlton, Ben Cooper Halloween costumes, and even a lunch-box from the series.

Land of the Lost

For three seasons — from 1974 to 1976 — every Saturday morning was reserved for the fantastic world of Sid and Marty Krofft’s live action dinosaur romp, Land of the Lost.  Linda Laurie’s series theme music has become part and parcel of the American pop culture landscape, and it acquaints viewers with the story of Land of the Lost.

Here’s a quick paraphrase, Rick Marshall (Spencer Milligan), Will (Wesley Eure) and Holly (Kathy Coleman) — on a routine expedition — experience the “greatest earthquake ever known.” They plunge down a waterfall in the Grand Canyon and find themselves lost in a closed, prehistoric, pocket universe known to its bizarre denizens as the Land of the Lost.

However, even as the family attempts to return to their twentieth century home utilizing the Land of the Lost’s strange crystal technology (housed in pyramidal stations termed “pylons”), the family grapples with the nefarious Sleestak., Hissing lizard people who are actually the devolved remnants of the once-advanced Altrusian culture and the inhabitants of a mysterious lost city hewn from stone.

Thanks in large part to story-editor David Gerrold, the stories on Land of the Lost involve intriguing science fiction concepts, like time-loops and alternate universes.  Many episodes also feature a strong environmental bent, with the Marshalls attempting to restore the balance of nature in the Land of the Lost. Thanks to Gerrold’s efforts, installments are written by the likes of Theodore Sturgeon, D.C. Fontana, Margaret Armen, and Larry Niven.  Talk about a great sci-fi primer for the young!

Quite simply, the greatest Saturday morning series of the 1970s, which explains why it was re-booted in the 1990s, and made into a motion picture in 2009.

Valley of the Dinosaurs

In this animated series that aired on CBS for just one season, the Butler family is lost while exploring an uncharted river canyon in the “heart of the amazon.” After being caught up in a whirlpool, they are propelled into a “hostile world” of dinosaurs.

Although the premise of the series sounds a lot like Land of the Lost, Valley of the Dinosaurs is very much the tale of two families – one modern and one prehistoric — learning to help one another, to survive. There is no real recurring enemy to fight, save for the dinosaurs, army ants, and other challenges in valley. There is a focus on pre-adolescent humor and hijinks, and getting across a moral lesson with each story.

The first half-hour episode of Valley of the Dinosaurs aired on Saturday, September 7, 1974 and is titled “Forbidden Fruit.”

This episode introduces us to the Butler family, which consists of white-haired patriarch, John Butler, who is a high school science teacher, his troublesome and prone-to-mischief son, Greg (who likes to say things such as “jumping jeepers!”), teenage daughter Katie, and the protective mother of the clan, Kim. The Butlers have also brought along their loyal dog, who closely resembles Scooby-Doo (remember, this is Hanna-Barbera too…), named Digger.

As I noted above, the thematic leitmotif of Valley of the Dinosaurs involves the Butler’s learning to cooperate, respect and live alongside a “mirror” human family of primitive cavemen, which includes patriarch Gorok, hunky son Lok, and matriarch Gara, among others. Tana is the little cave-person girl and Greg’s playmate. The cave family even cares for a pet Stegosaurus named “Glump.”

Each episode involves one family teaching the other family a lesson in tolerance and diversity. The differences in evolution don’t matter, the show informs us as viewers; we can still be “good neighbors.”