The streets of the 1970s were littered with a variety of vehicles: badass muscle cars, massive gas-guzzling “land yachts” your parents drove, new economy cars to handle the gas crisis, motorcycles (always ridden without helmets), and, of course, VANS. 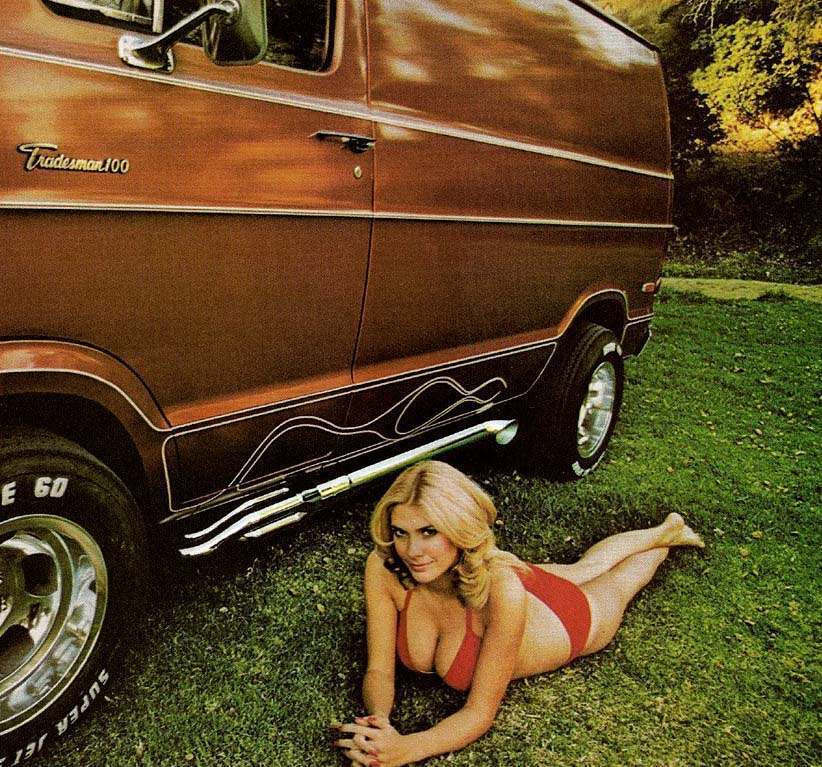 There were no minivans in the 1970s.  This was a time before the van had been tamed, before it had been neutered into the soccer-mom machine that it is today.  In the 1970s, vans didn’t carry spoiled kids drinking juice-boxes and watching Spongebob…. quite the contrary.  Vans were basically a bedroom on wheels.  No Spongebob, no juice boxes, no trips to organized sporting events in the suburbs…. just lots of sex and recreational drug use.  You might say the 1970s full size van wasthe crazy uncle of the modern minivan – the uncle that lived dangerously in the 70s, then flamed out at decade’s end. 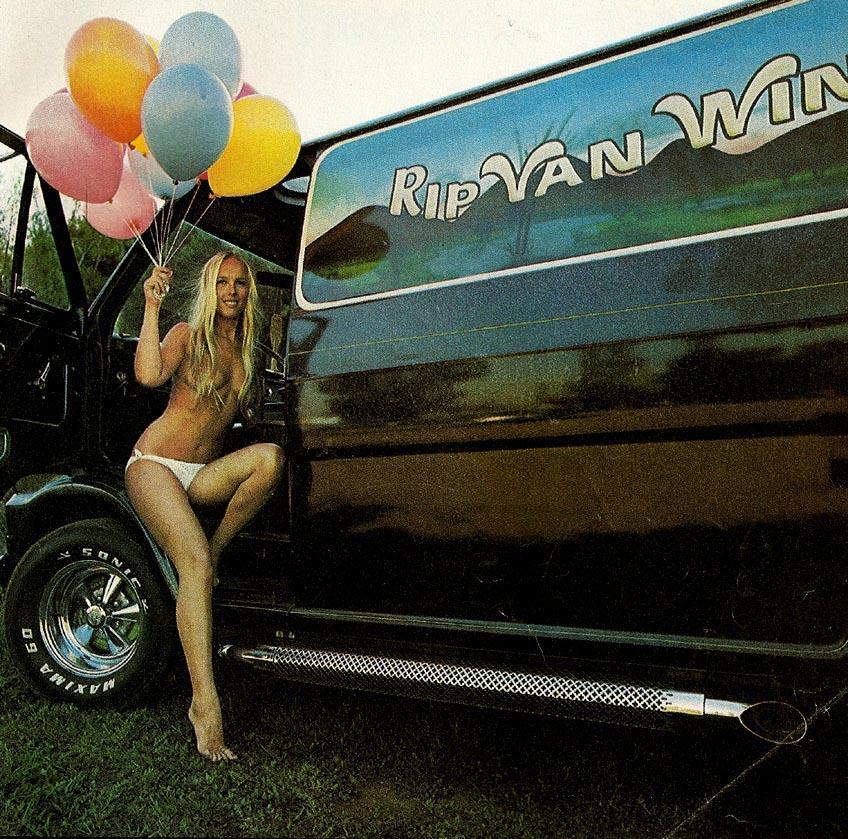 In the 1970s, many van owners took their shaggin’ wagons seriously and tricked them out to the limit: Big shiny sidepipes with mellow sound, plush interior carpeting for maximum fornication, duals to amp up the horsepower,…. and, perhaps most importantly, the artwork on the sides…. 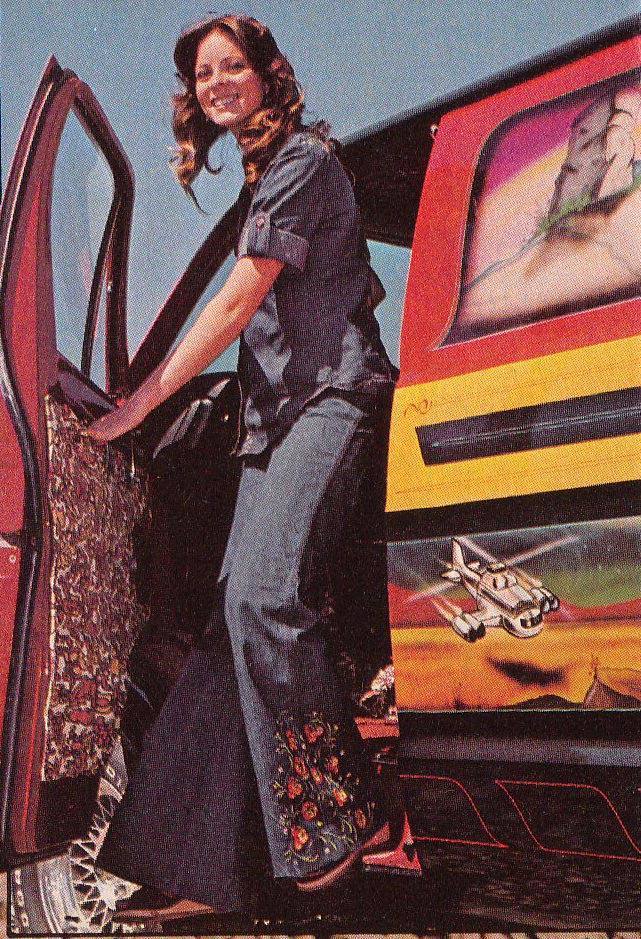 The vans of the 1970s were decorated with airbrushed psychedelic wizards, doobie smoking dragons, naked slave girls, flaming unicorns… the trippier the better.  I reiterate – this was not your mom’s minivan.  This was a place where “bad” things happen, and the designs were warning signs.  Get into the back of a van with an airbrushed Grim Reaper in a land of mushrooms and naked fairies, and you should know what your getting into. 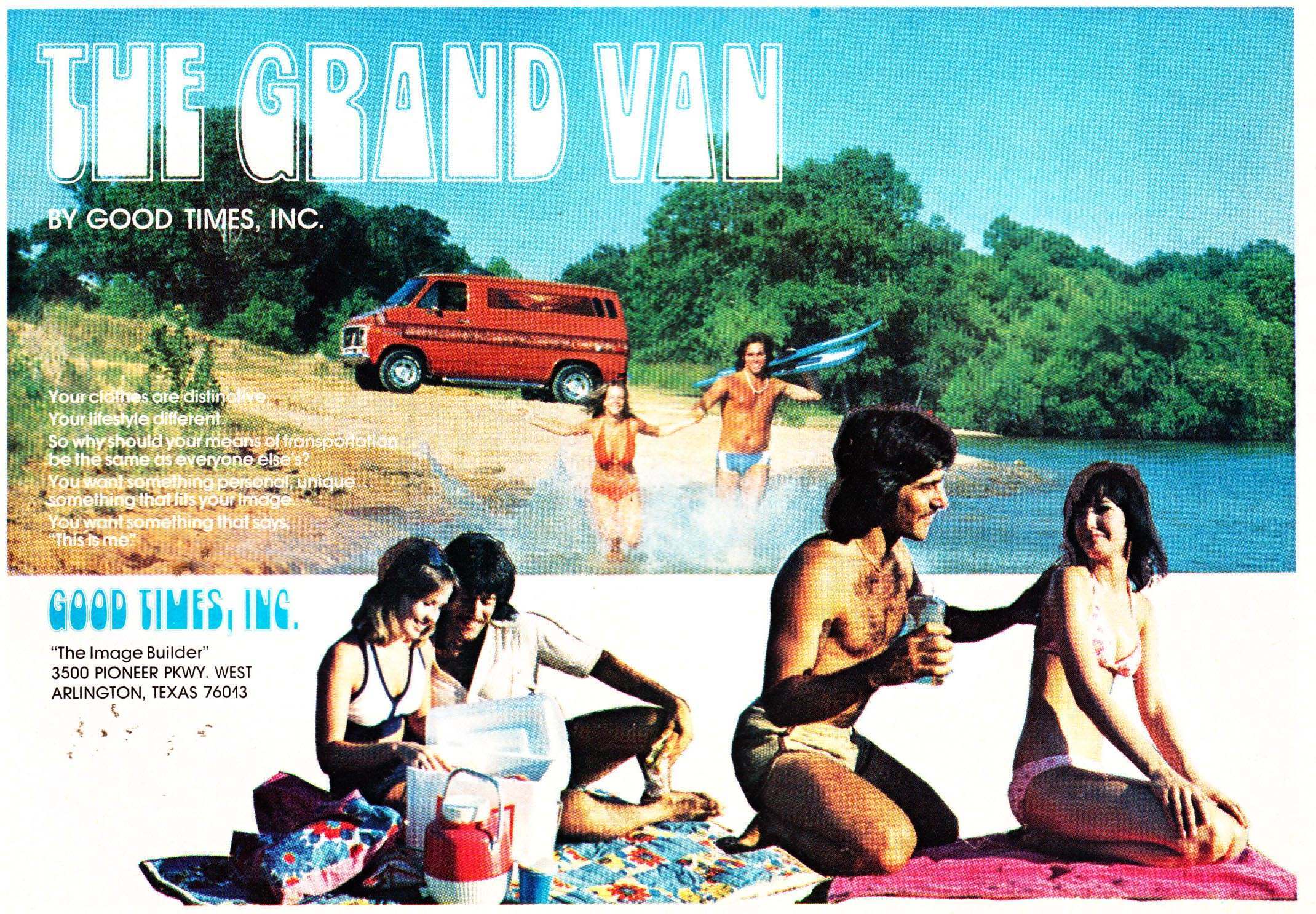 It was the Sexual Revolution – a vehicle designed to accommodate massive amounts of sex and drugs just made sense. 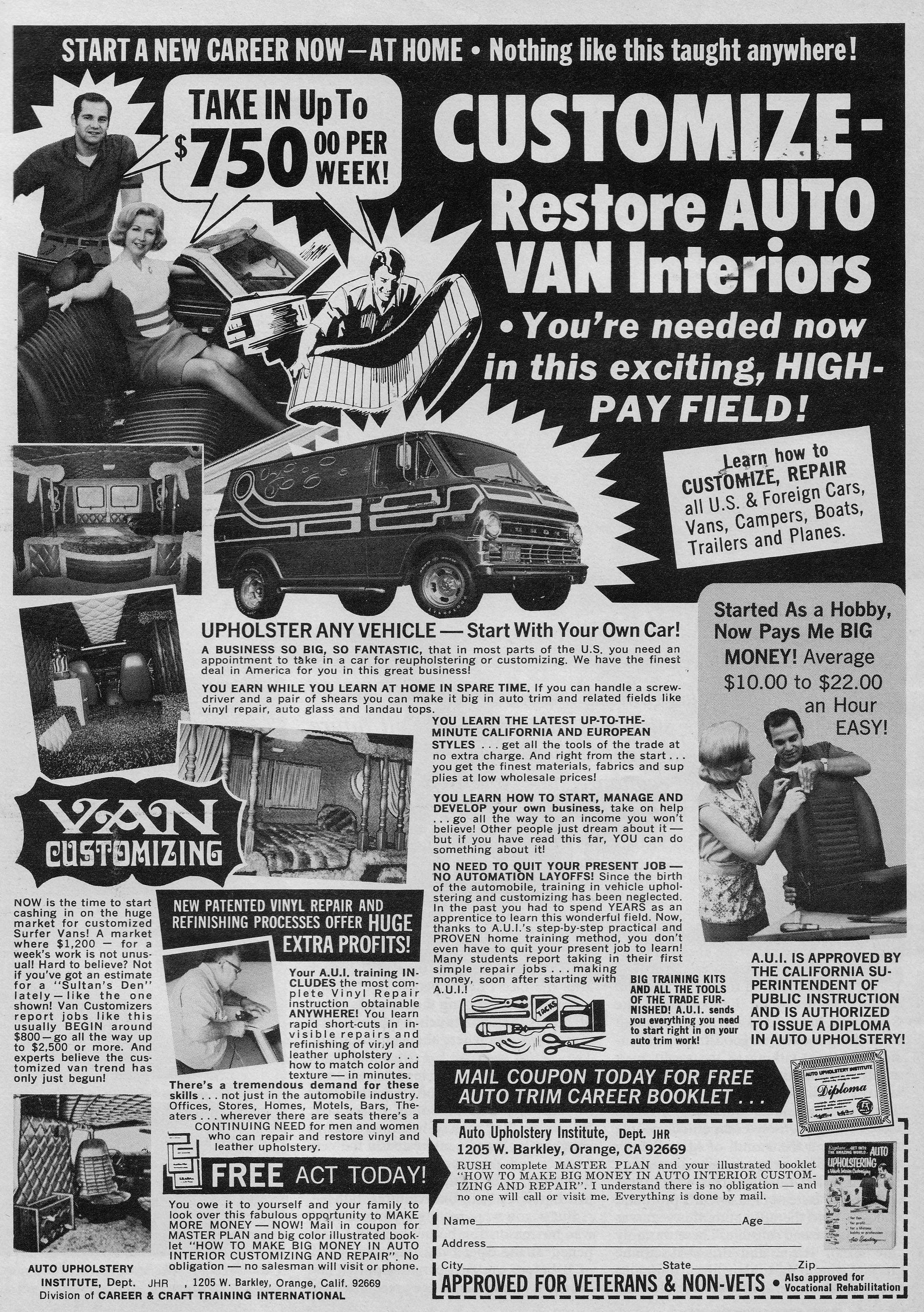 This advert from 1974 explains that custom vans are big business – a “career” that can make you “big money”.   I love the shot of the bed (waterbed, maybe?)  – they didn’t play around back then.

There was even a movie devoted to the subject…. 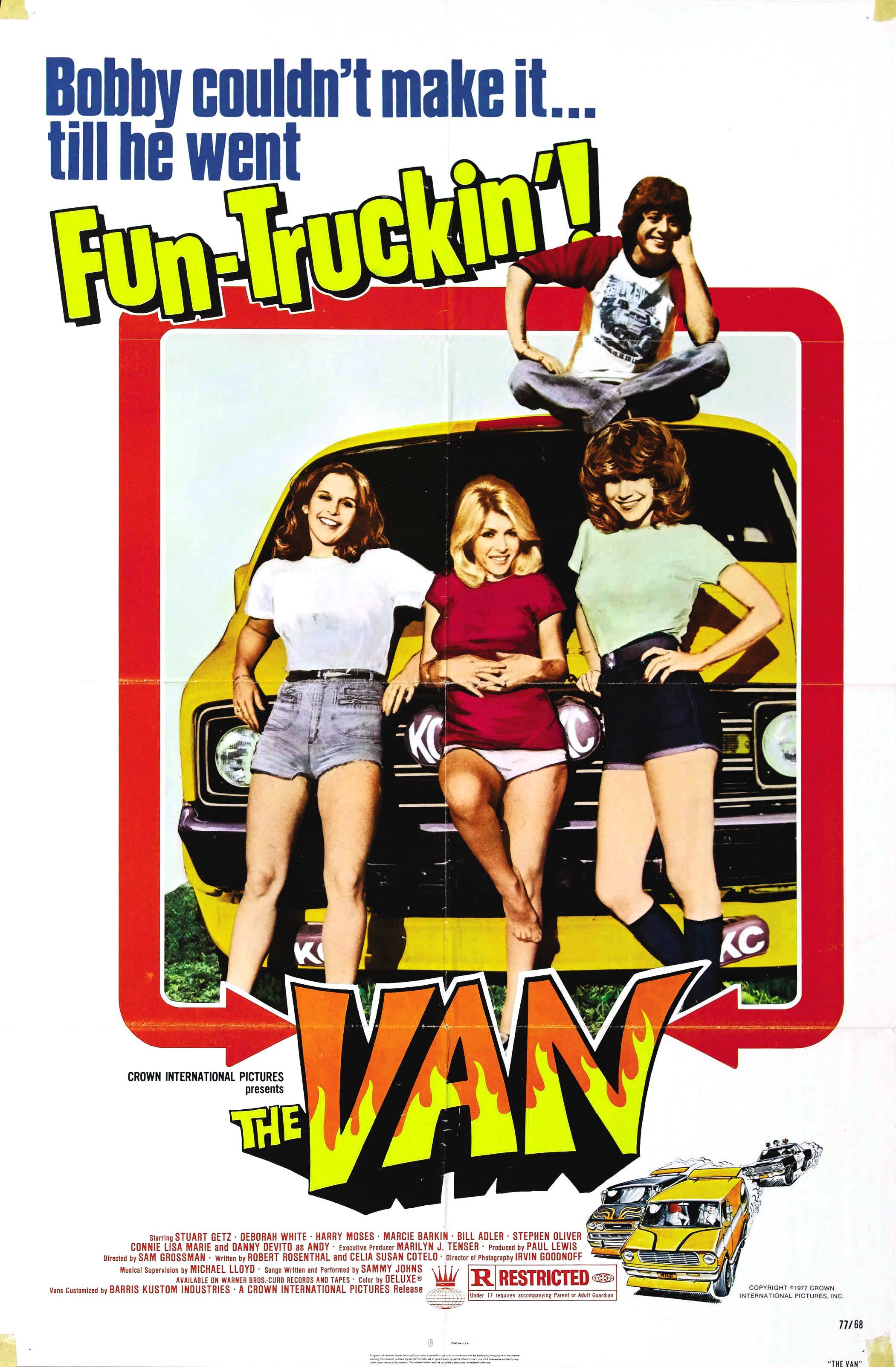 This is actually one of the funnest movies to come out of the 1970s.  It stars Stuart Getz – you may remember him as the “nice boy” on The Brady Bunch who still likes Marcia even though she has a hideously deformed nose from a freak football accident.  Marcia, of course, treats him like total shit… but that’s neither here nor there.

Anyway, nerdy Stuart gets an insanely tricked out van, and the non-stop shagging commences.  There’s an amazing soundtrack by Sammy Johns which delivered the #1 hit, “Chevy Van” – a song about… well, having sex in a Chevy van.  “Early Morning Love” is another great track – a song about…. yes, again, having sex in a van – this time specifically in the morning hours.

Here’s a clip from the film where Stuart takes his girl to a van show with Sammy Johns’ tribute to van-sex playing in the background.  It doesn’t get more 70s than this, folks.

Note that, although the theme song for the film is “Chevy Van”, the van that Stuart drives is a Dodge.    Just so you know, THIS, my friends, is the mighty Chevy Van…. 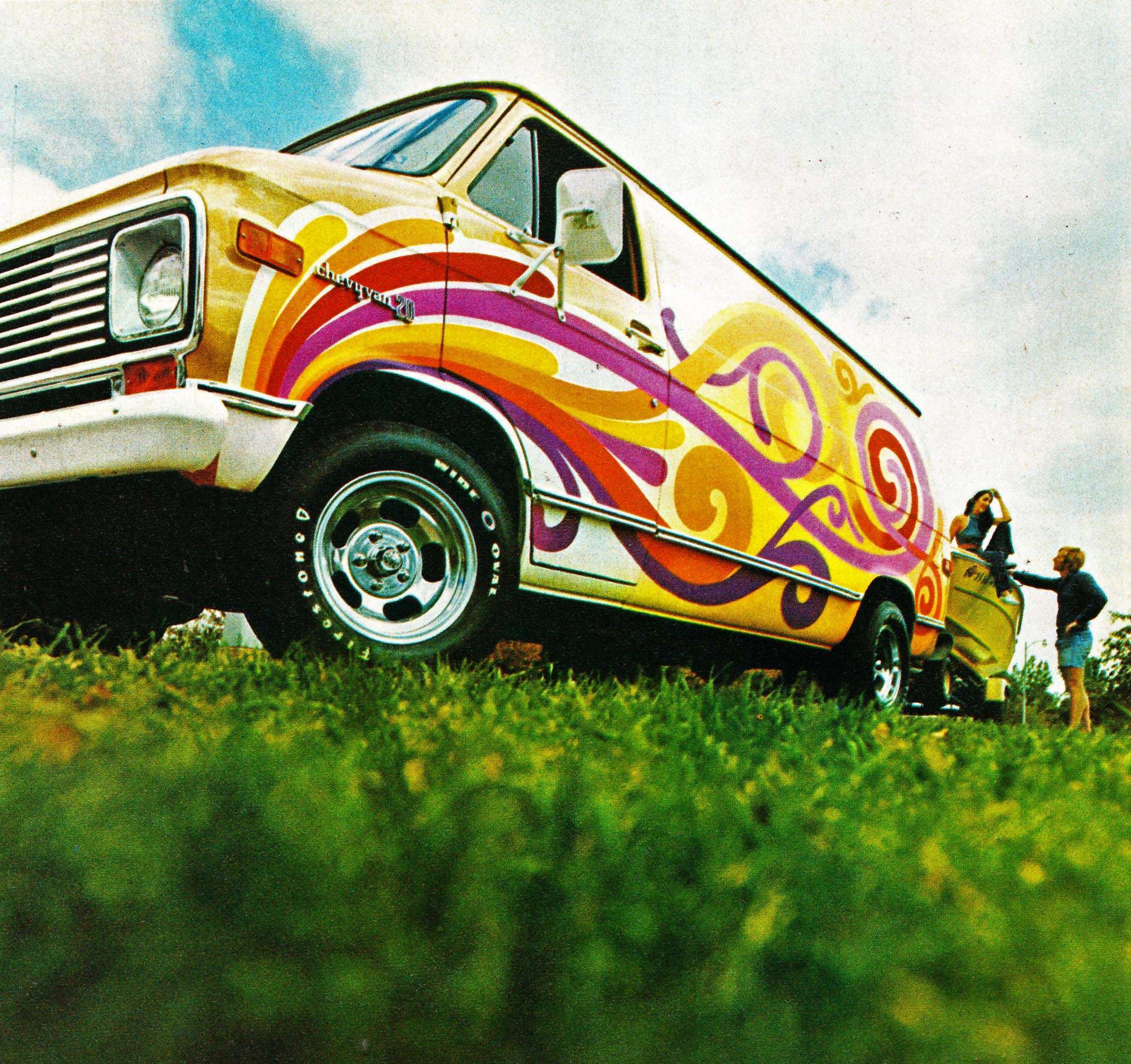 And while we’re on the subject of custom van shows, I have scanned a few pages from a couple magazines from 1973 and 74 which illustrate beautifully the magic, the wonder… 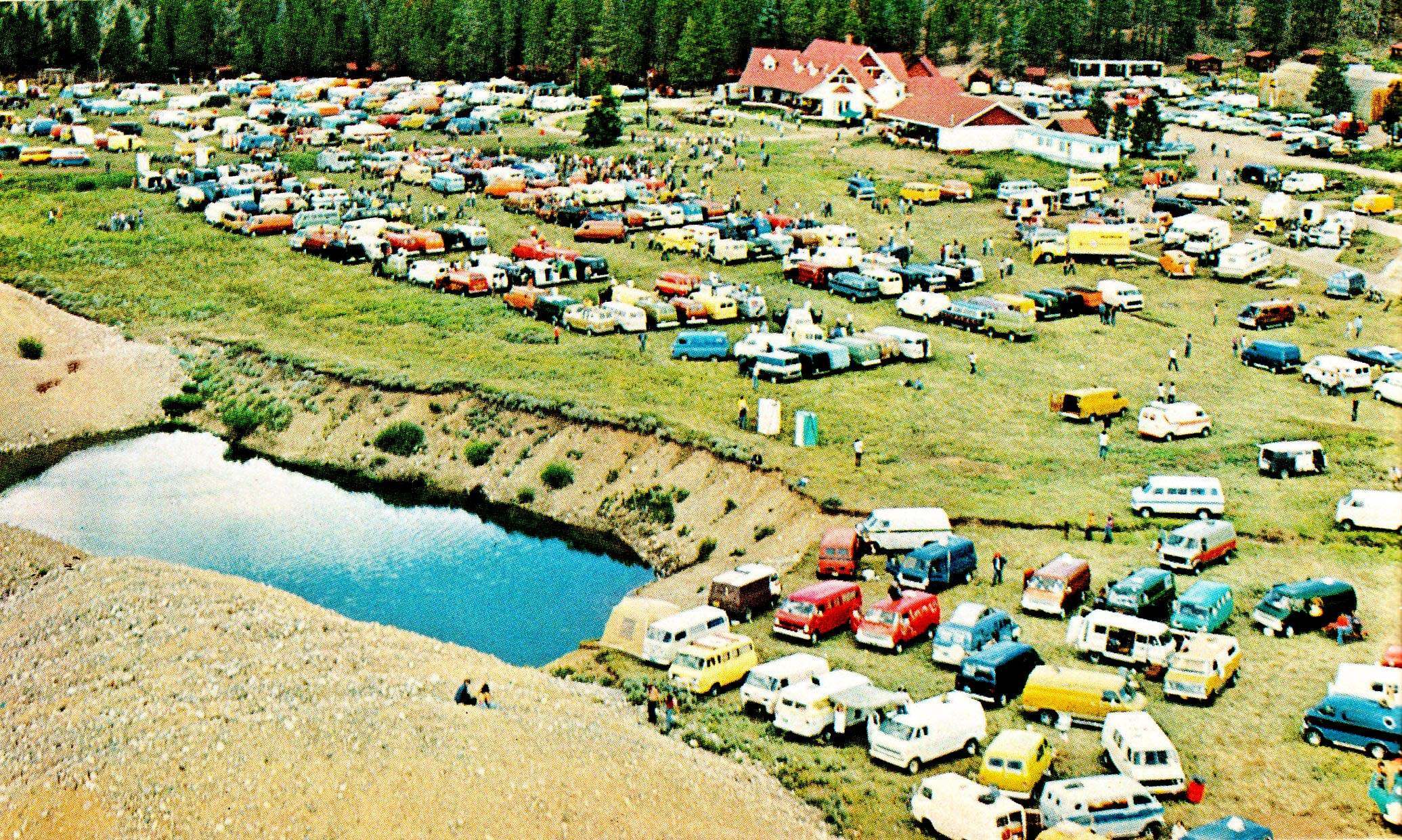 Much weed was smoked on that day. 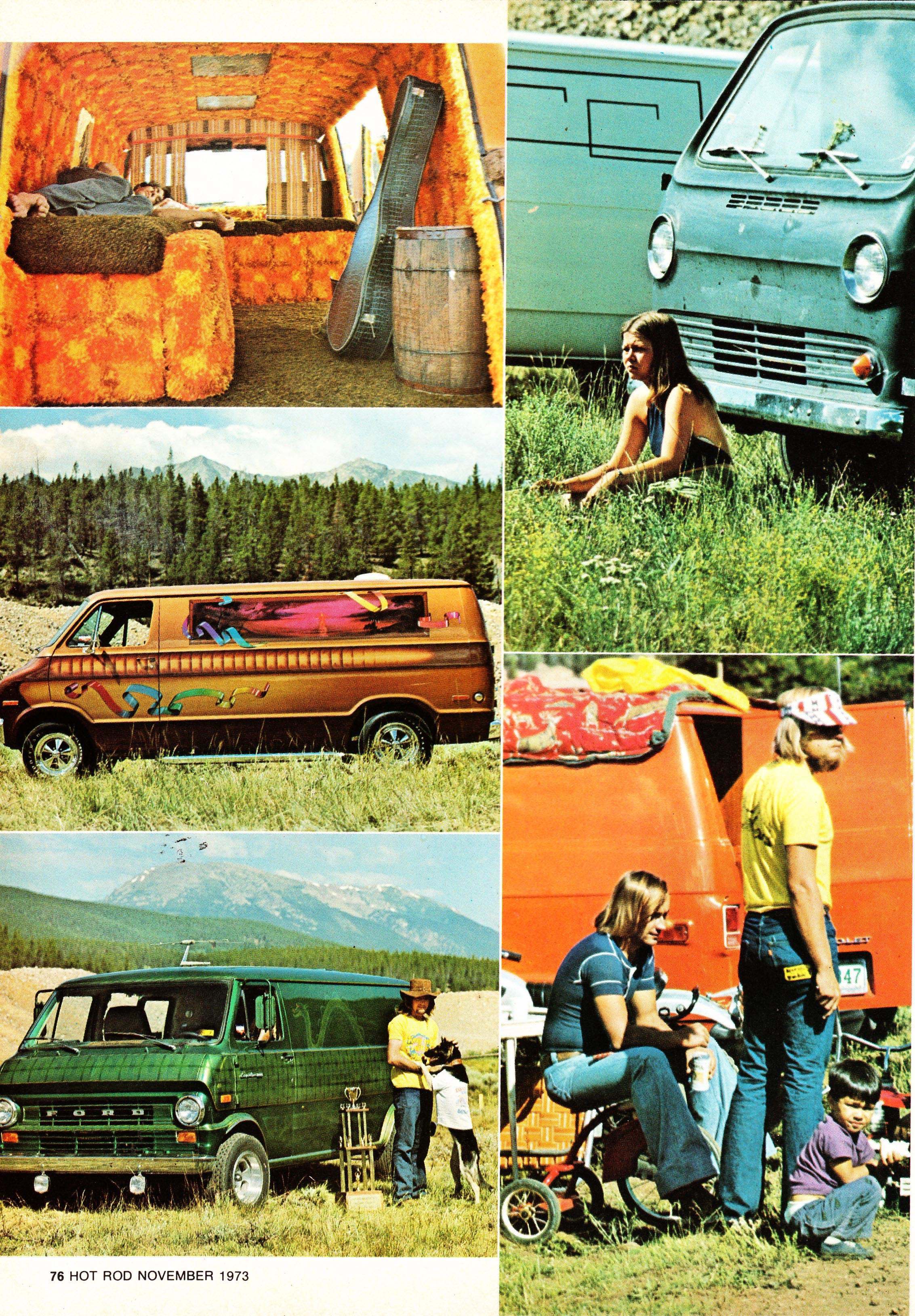 The Boomers had waved goodbye to the hippy movement, but the desire to be “free” was still a thing.  Songs like “Me and You and a Dog Named Boo” declared the generation’s passion to spread their wings on the open road, untethered by responsibility. 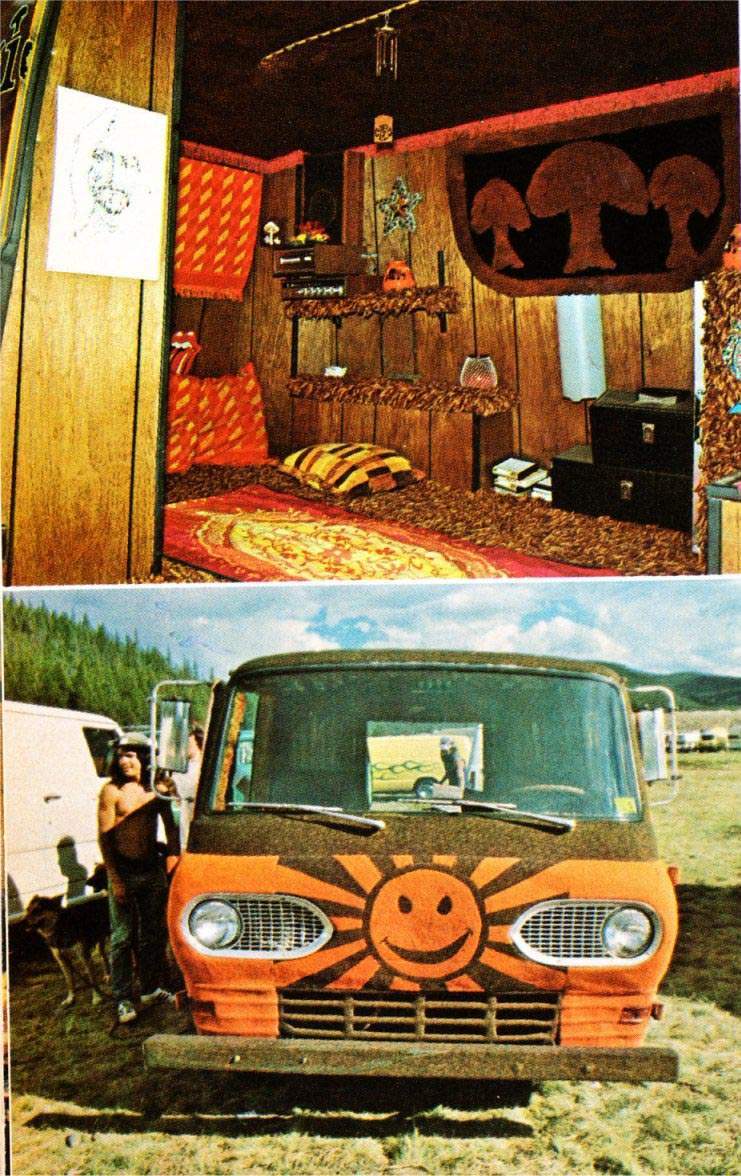 The only downside to thick shag carpeting was that your roaches tended to get lost in the fibers. 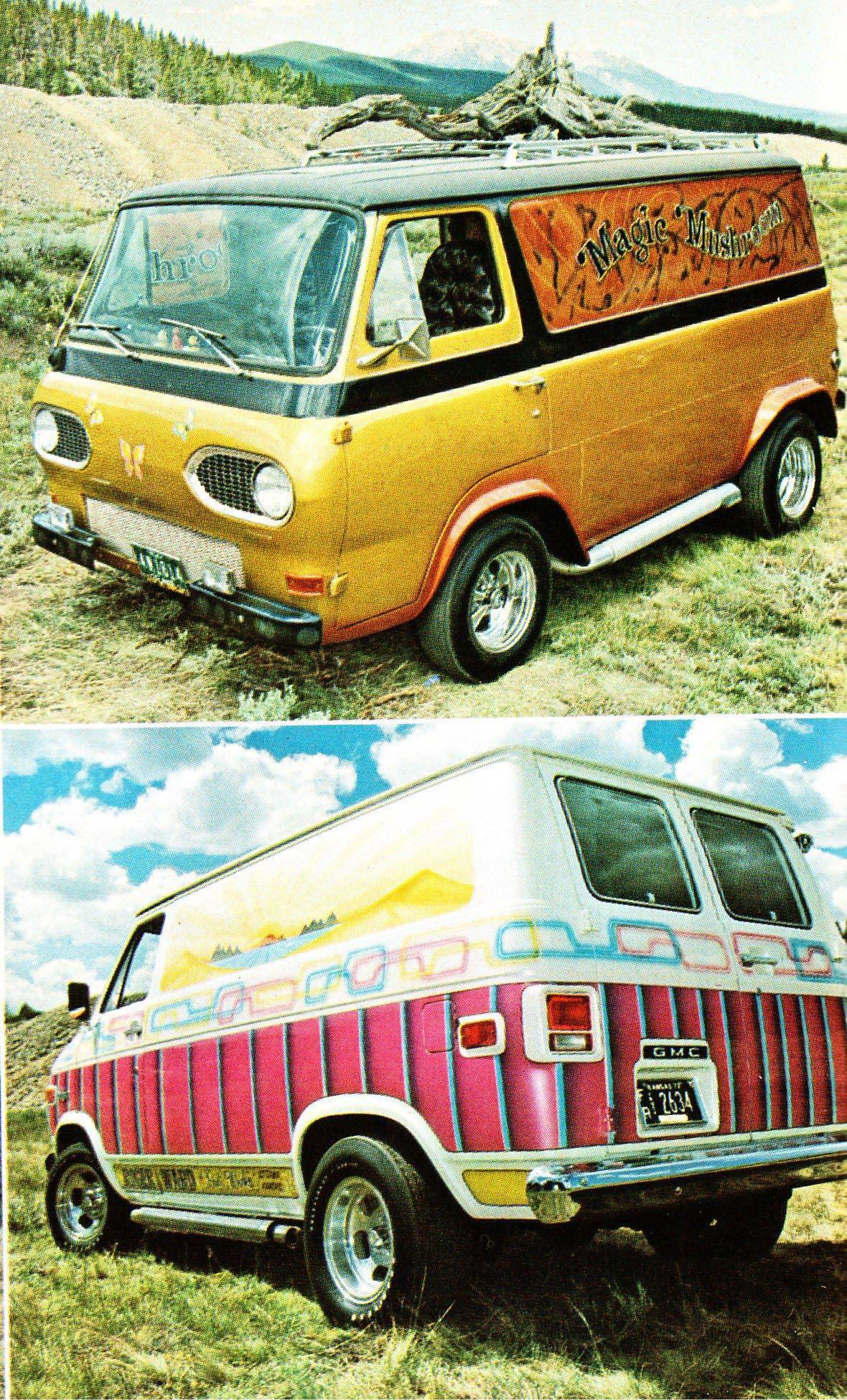 Nowadays, a van labeled “Magic Mushroom” wouldn’t make it a mile down the road without being stopped, searched, impounded and driver imprisoned. 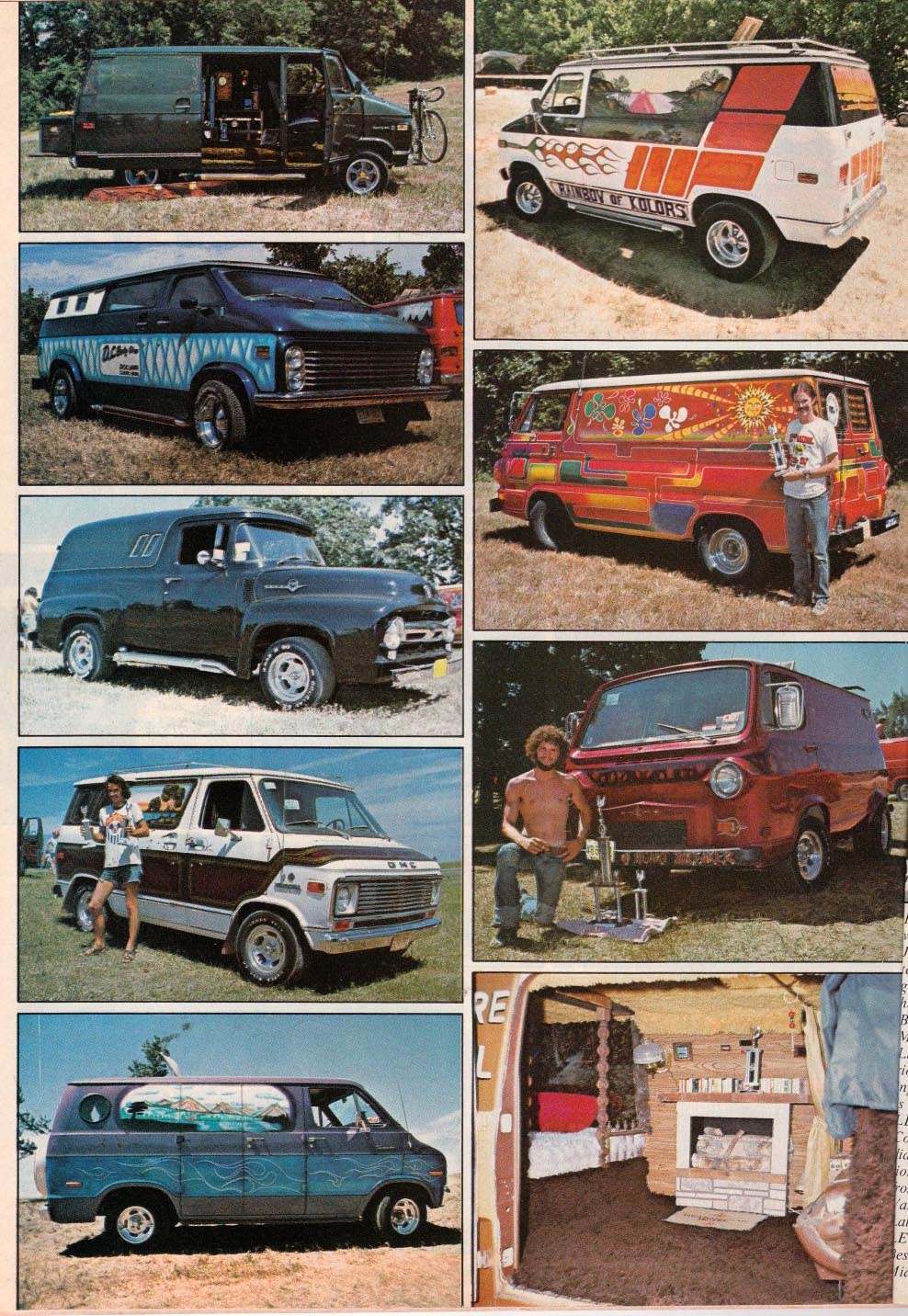 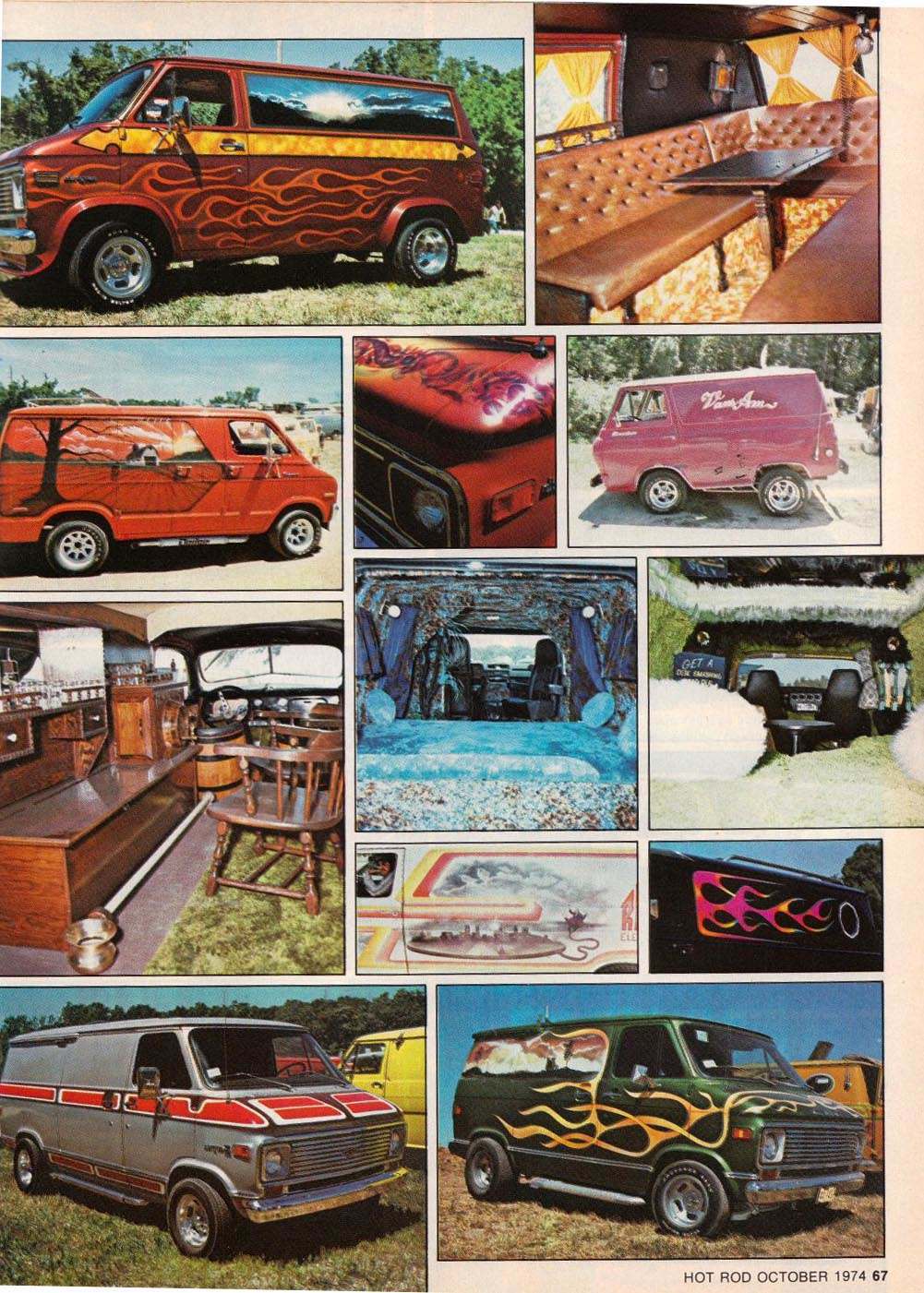 Of course, I don’t want to paint a completely one dimensional picture of the 70s van.  They weren’t all used for sex and drugs.  In fact, before the days of seatbelt requirements, they were great for family trips.  I spent many a vacation as a child travelling in my aunt and uncle’s full size van, enjoying the splendor of spacious leg-room.  It had a CB and we could play Rock’em Sock’em Robots in the back – life was good in a 70s van, even for kid. 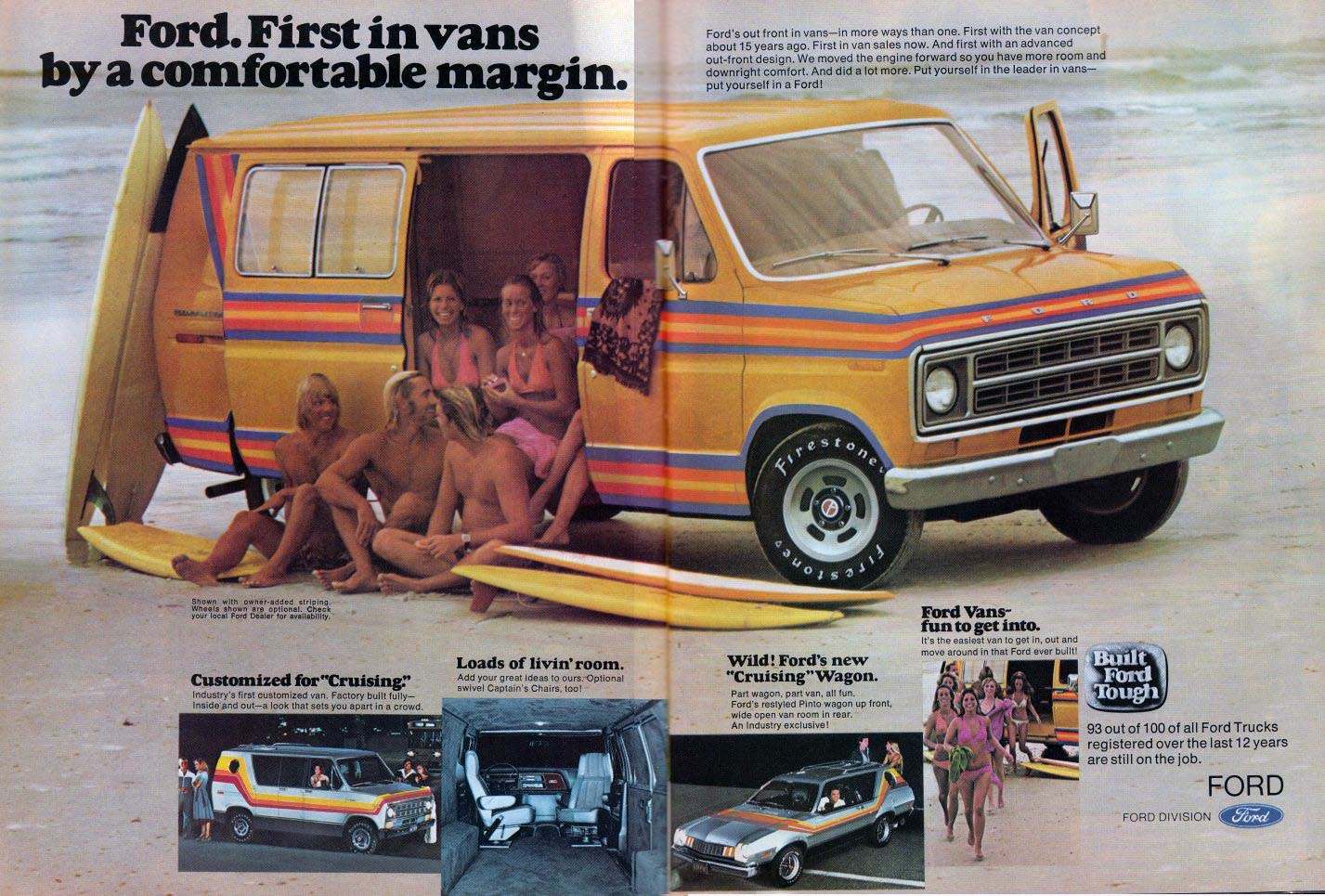 Notice how this 1976 Ford advert targets the “young swingers” specifically by selling their vans for “cruising”.  Judging by this advert, Ford vans were basically sex magnets on wheels.  It’s sad that vehicles like this today are often labeled “rape vans”… they’ve certainly fallen from grace in the past few decades.

Like a boat, vans of the 70s often had their own name branded on the side.  My personal favorite: “Frito Vandito”.

Note that the “Pot O’ Gold” pictured above isn’t referring to what you think its referring to.  Think “Acapulco Gold” and “Lumbo Gold” (AKA Columbian Gold). 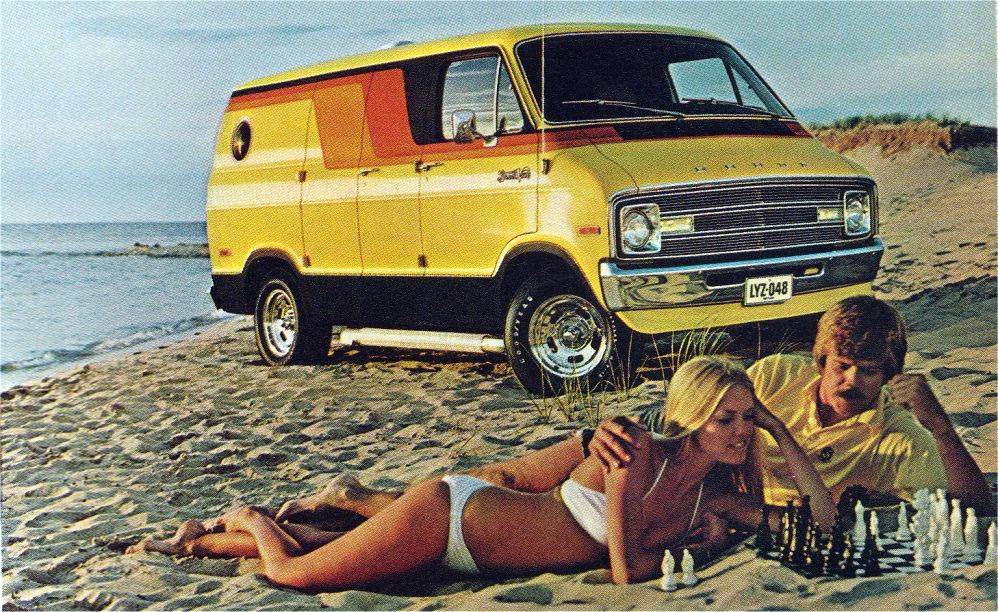 Well, it’s been fun traveling down memory lane in our customized van.  But now it’s time to fling our joints out the window and call it a day.  Keep on Truckin’. 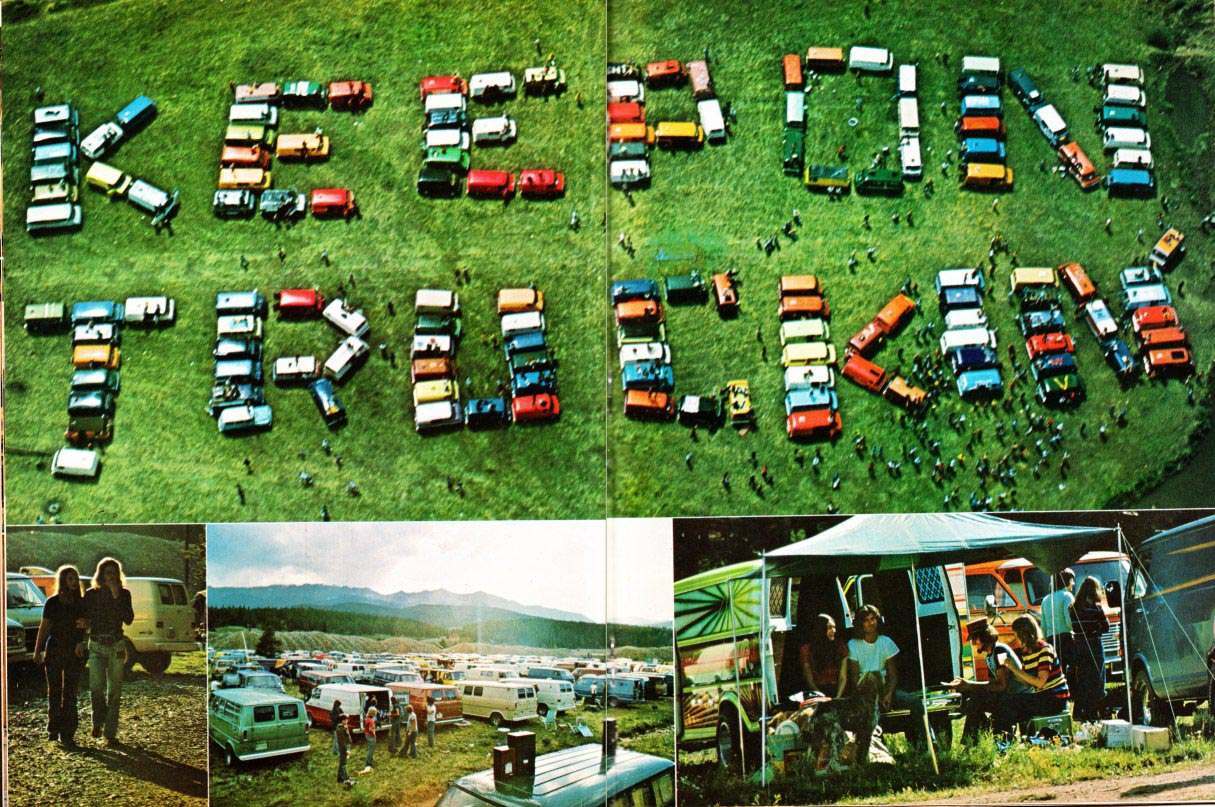