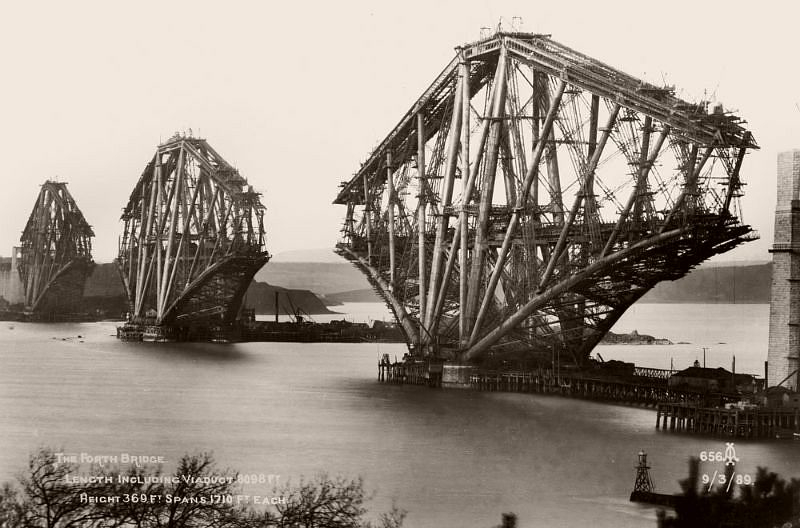 Spanning 541 meters over the Firth of Forth, Edinburgh’s Forth Railway Bridge became the longest cantilever bridge in the world when the future King Edward VII drove its final “golden” rivet on March 4, 1890. Its length was surpassed a few decades later by the Quebec Bridge in Canada, completed in 1919, but the Forth Bridge still holds second place, and remains an incredible feat of engineering.

The bridge was fully restored in 2012, designated a UNESCO World Heritage Site in 2015, and voted Scotland’s greatest man-made wonder the following year. “Its distinctive industrial aesthetic is the result of a forthright and unadorned display of its structural components,” writes UNESCO. “Innovative in style, materials and scale, the Forth Bridge marks an important milestone in bridge design and construction during the period when railways came to dominate long-distance land travel.” 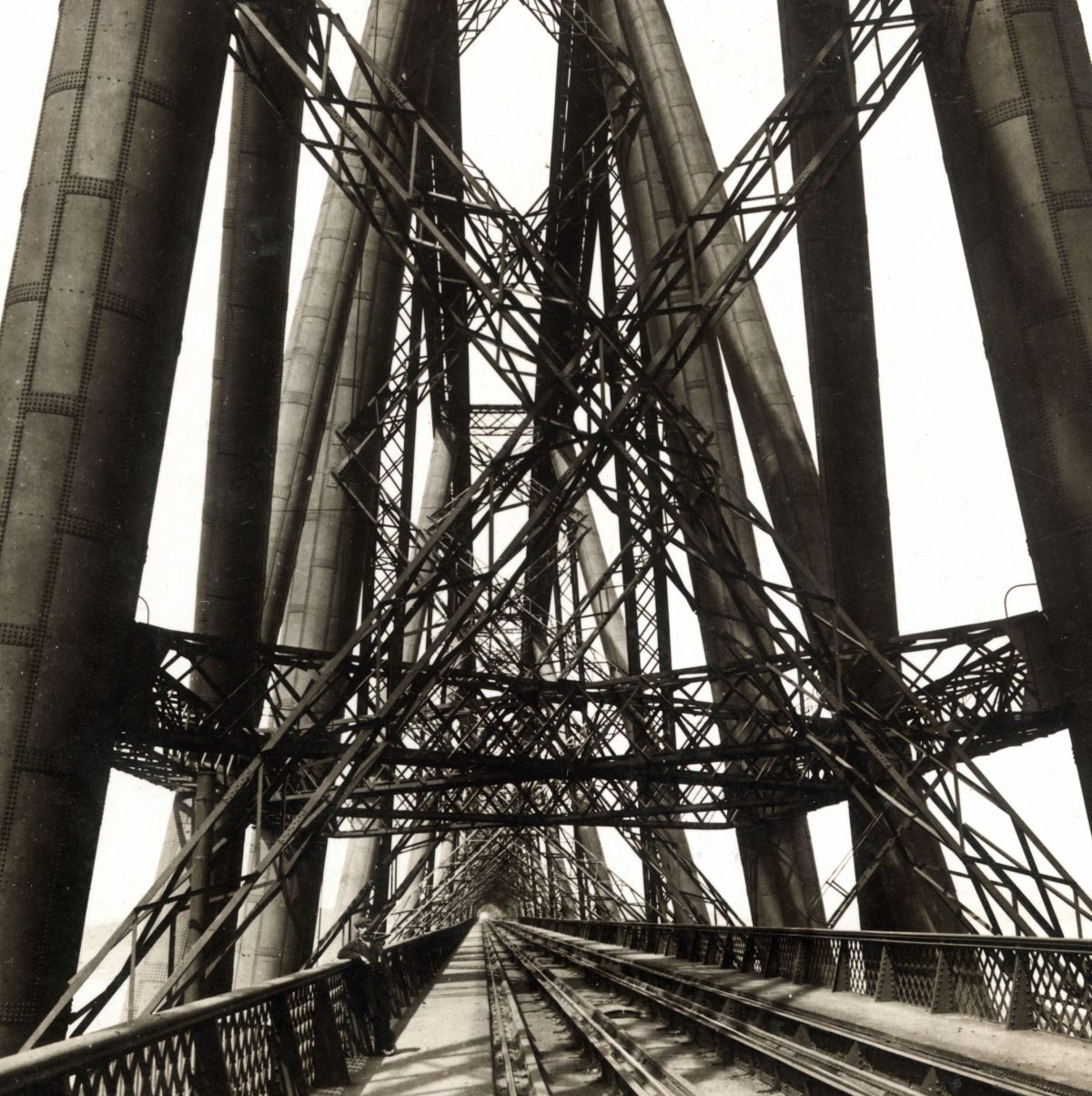 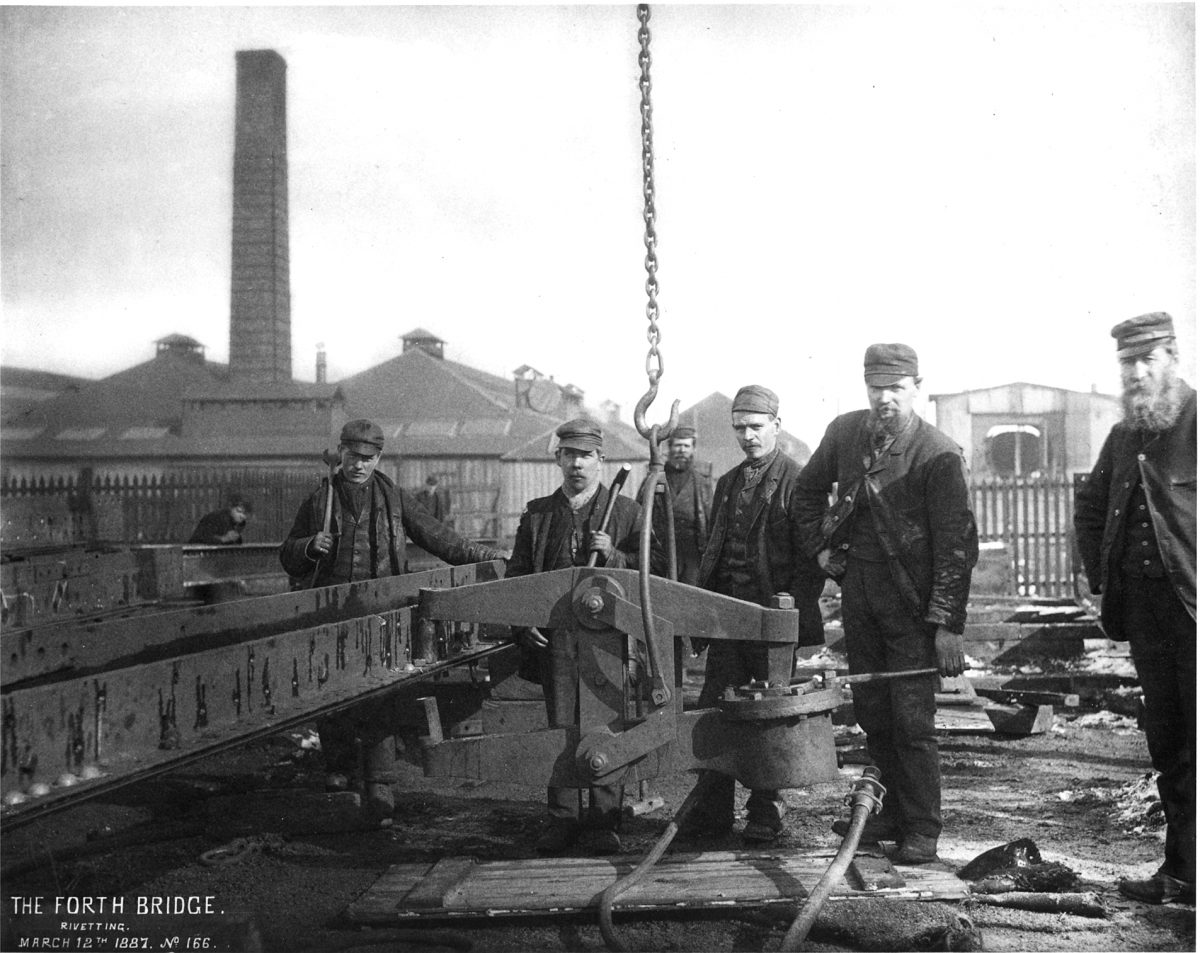 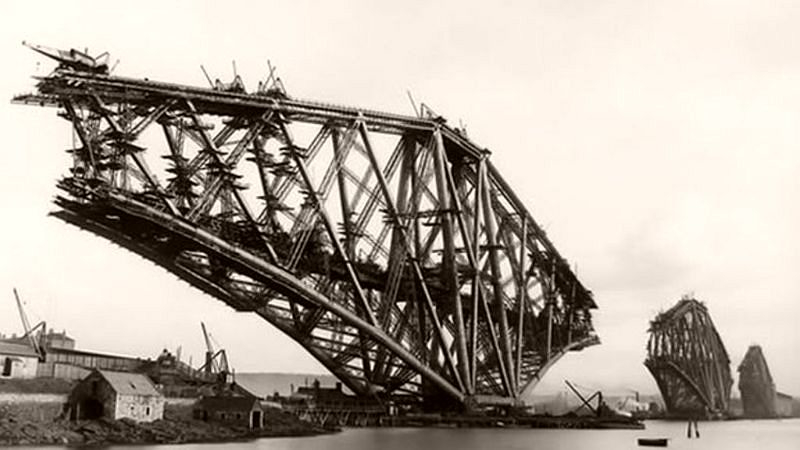 Work on the bridge’s materials started in 1882. Workers began laying foundations in 1883, a dangerous, three-year process that involved sinking wrought iron caissons into the seabed in order to build the granite piers that would support the superstructure.  “The idea to create a permanent rail crossing over the Forth estuary came about in the 1870s,” notes The Scotsman, “when engineer Thomas Bouch was enlisted to design a railway suspension bridge to replace the Granton train ferry.” 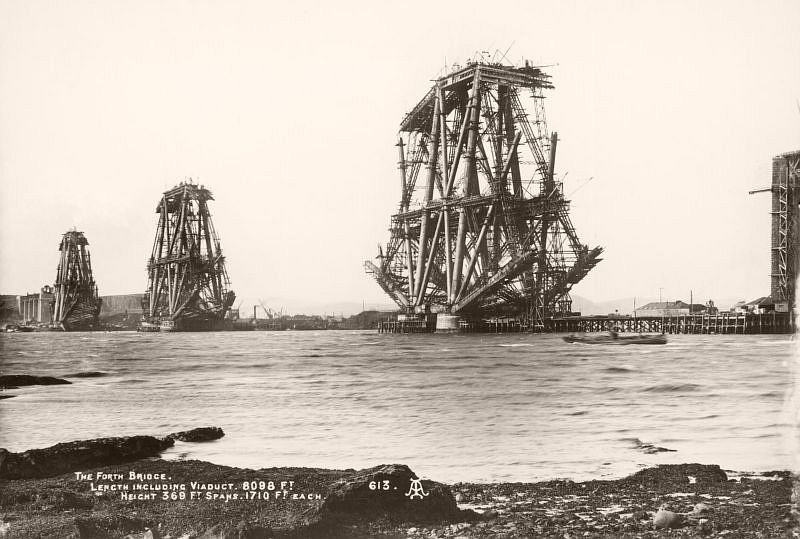 The project would be financed by a consortium of railroad owners. But before Bouch could begin, the Tay Bridge, which he had designed, collapsed in 1879, killing over 70 people. He was replaced by English engineers John Fowler and Benjamin Baker, who proposed the cantilever design as the best means of withstanding gale force winds and heavy freight trains. 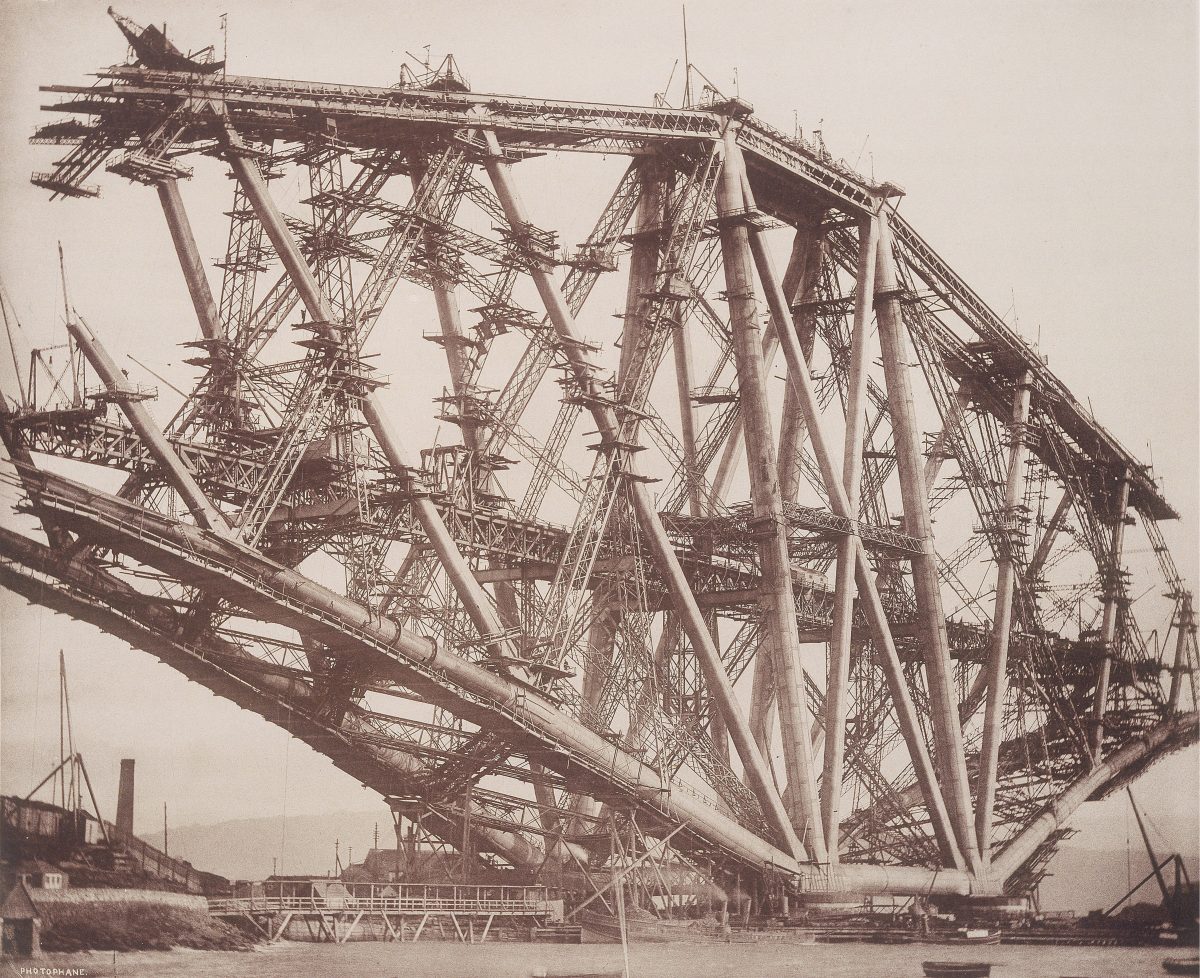 Forth Railway Bridge, Scotland: the Fife cantilever under construction during October 1888. This was the first steel bridge, and was built with tubes fabricated from sheet steel produced by the Siemens-Martin process. It carried the railway across the Firth of Forth near Edinburgh. Designed by the British civil engineers John Fowler (1817-1898) and Benjamin Baker (1840-1907). Opened in 1890. Photograph 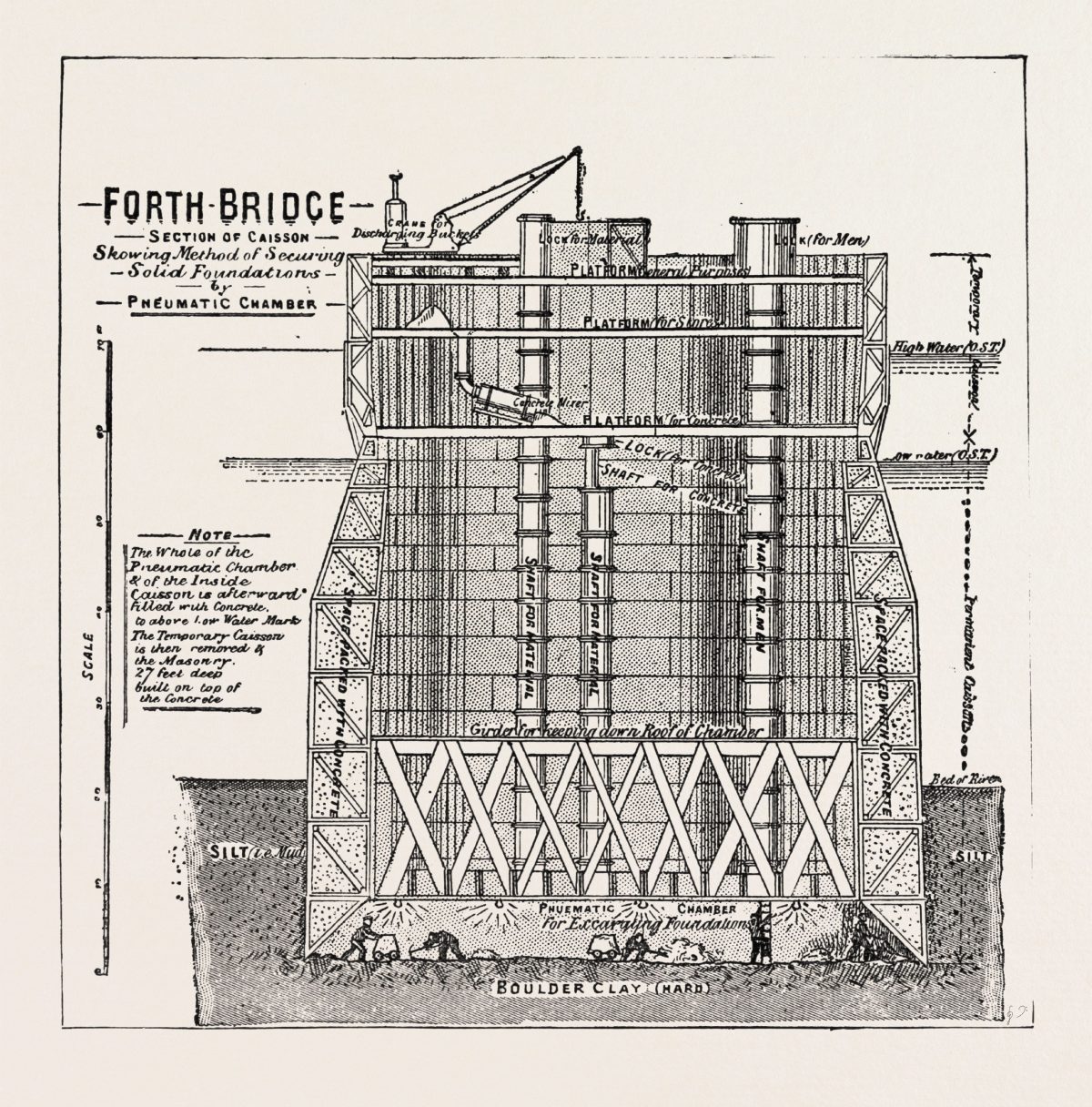 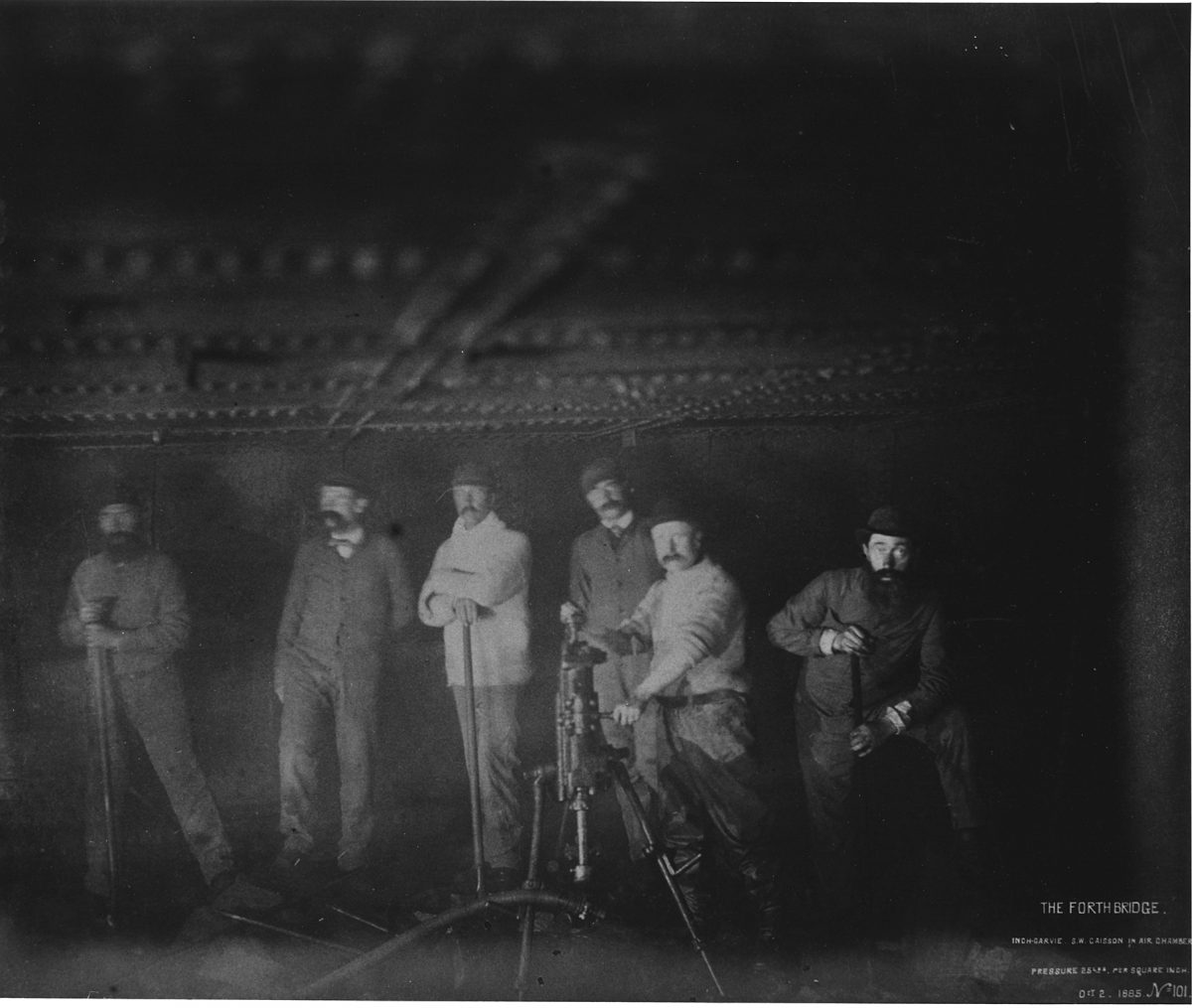 Working inside a Caisson 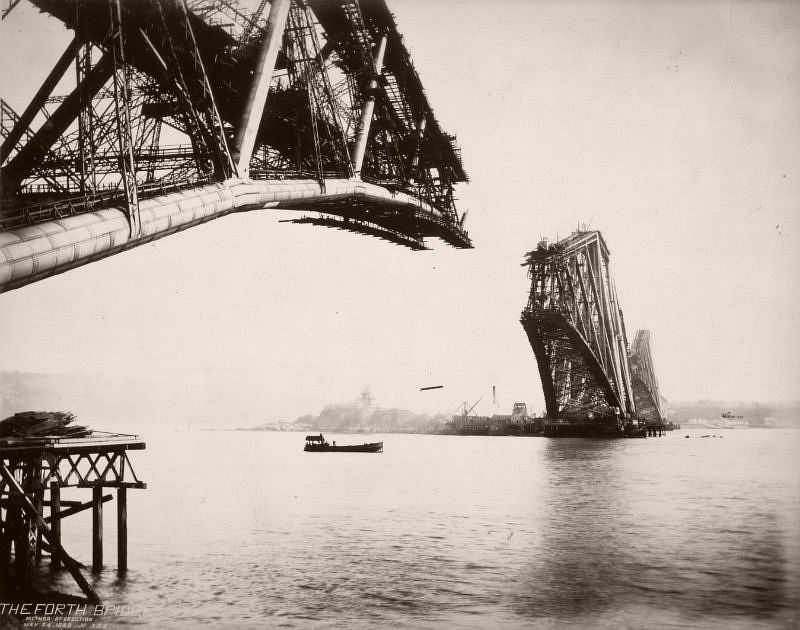 Built 150 feet above the water to allow large ships to pass beneath, the Forth Bridge “required ten times the amount of metal as the Eiffel Tower in Paris.” Upon completion, the bridge represented the largest-scale steel building project in Britain, using 55,000 tons of steel. Like so many infrastructure projects of the time, the scope of the Forth Bridge construction seems staggering in hindsight, given the lack of modern machinery and safety equipment. 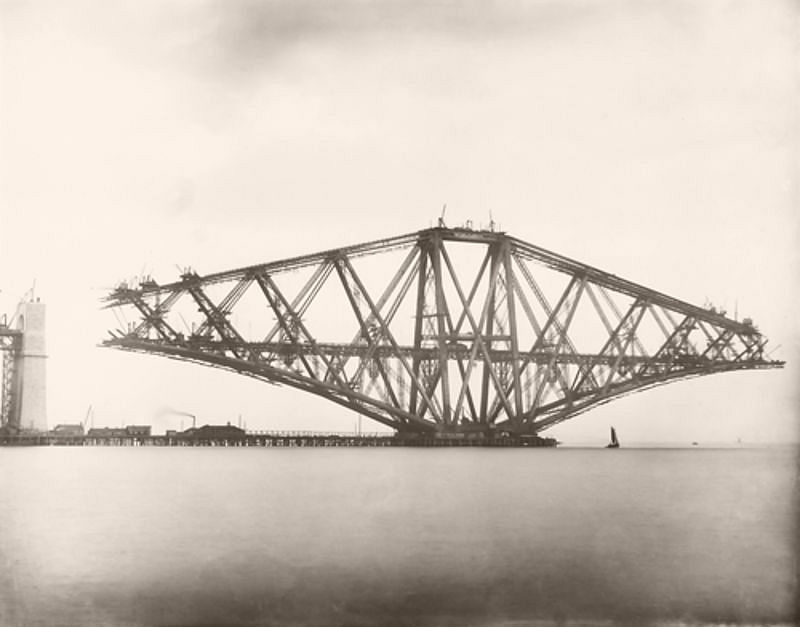 “At the peak of the work,” writes the Forth Bridges site, “about 4,600 men were employed on the construction…. During the seven years of construction, work was carried out from almost 100 feet below the surface of the water to over 300 feet above the surface.” Historians estimate that the project claimed the lives of 63 workers.

Work on the superstructure got under way in 1886 and the growing structure became a site of wonder as it grew out from the piers, growing first upwards as the towers were completed, and then outwards as the cantilevers stretched out to meet one another, seemingly defying gravity as they did so.

It’s easy to get a glimpse of that wonder in photographs of the massive cantilever sections rising between the shores of South Queensferry and North Queensferry. These photos date from between 1886 and 1890. The Forth Bridge, now called the Forth Railway Bridge to distinguish it from the roadway constructed later, would acquire an iconic bright red paint job that has seemed to need constant repainting since its opening, giving rise to the locution “like painting the Forth.” See more photos of the bridge’s construction at the Forth Bridges site and watch a documentary on the Forth Railway Bridge at PBS. 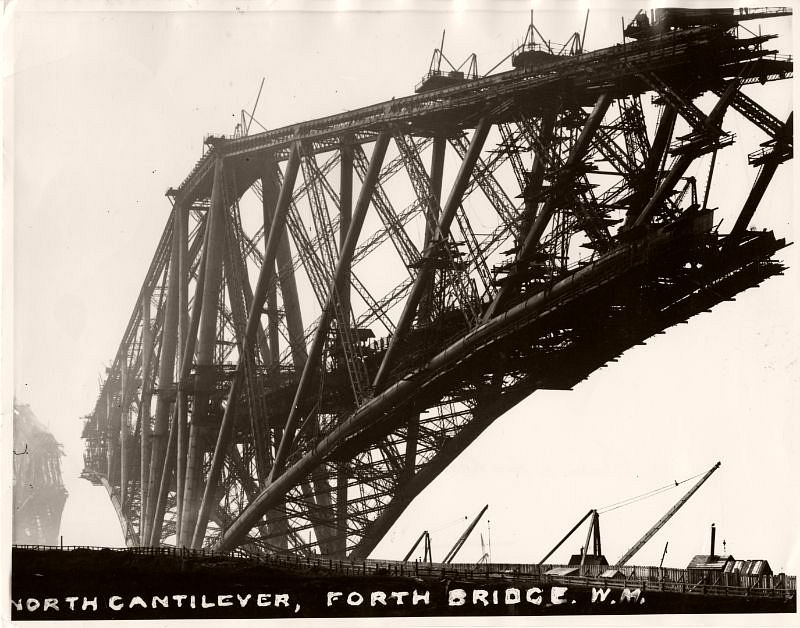 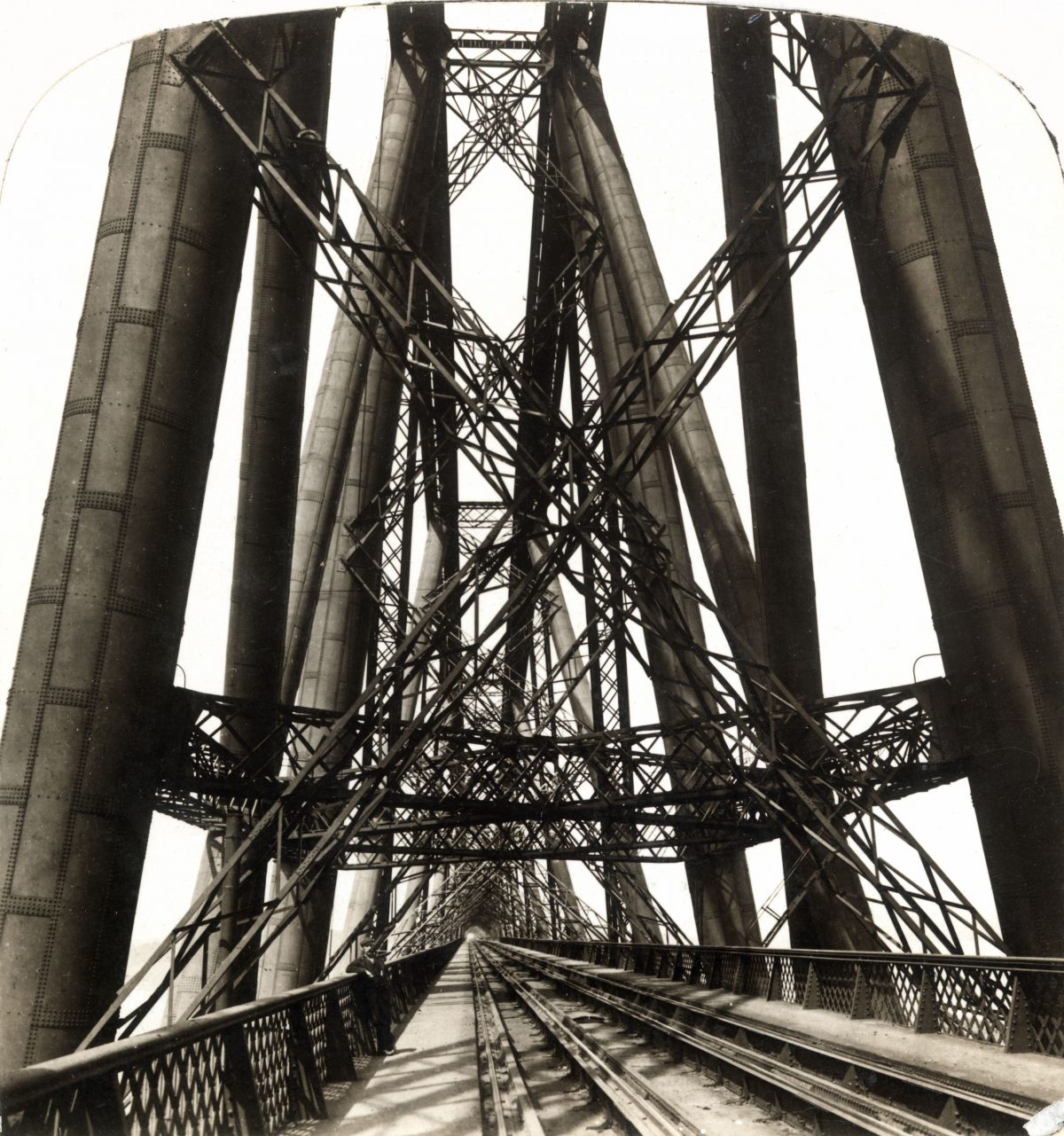 Scotland: Forth Bridge. A View Through The Forth Bridge, Spanning The Firth Of Forth, Scotland: Stereograph, 1902