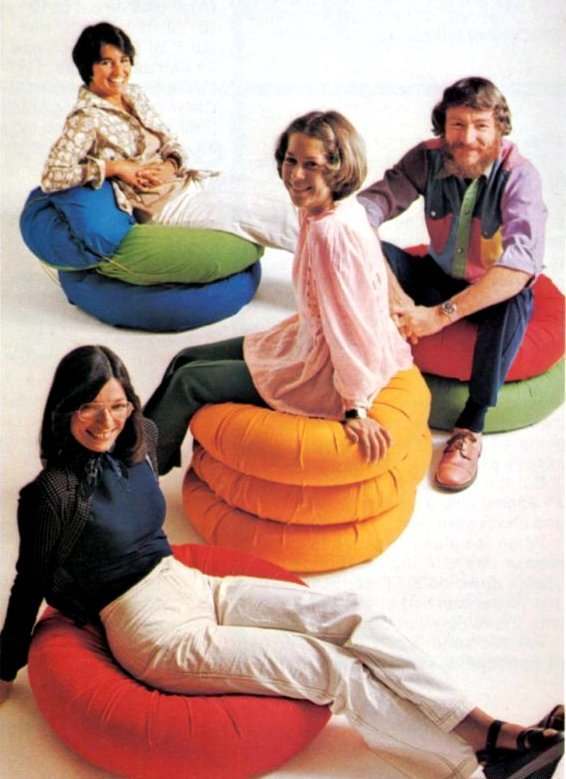 You get the feeling, when looking at 1970s styles, that designers just took a deep bong hit and let’r rip.  Sometimes they ended up with something special and innovative…. other times, not so much.  The counter-culture’s rebellious bent was never more obvious than in the décor: “Conservative” and “Traditional” were not in their vocabulary. So, even the chairs got re-imagined.

And that’s where this article comes in.  Let’s have a look at the various wild and and wonderful places people put their asses in the seventies….. Wait, that didn’t sound right. You know what I mean. 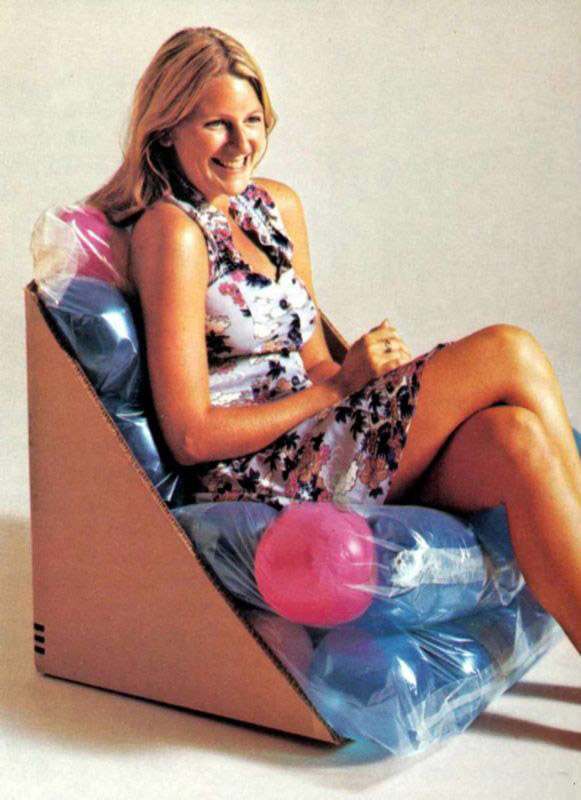 Yes, this chair is exactly what it looks like: a cardboard box with rubber balls wrapped in plastic. I imagine this contraption wouldn’t last through an episode of “Chico and the Man” before collapsing upon itself, releasing an embarrassing spray of blue and pink bouncy balls.

Remember the plastic wrap your grandma covered her sofas with? Remember the butt-sweat from sitting on that Saran wrap? This is chair is worse. 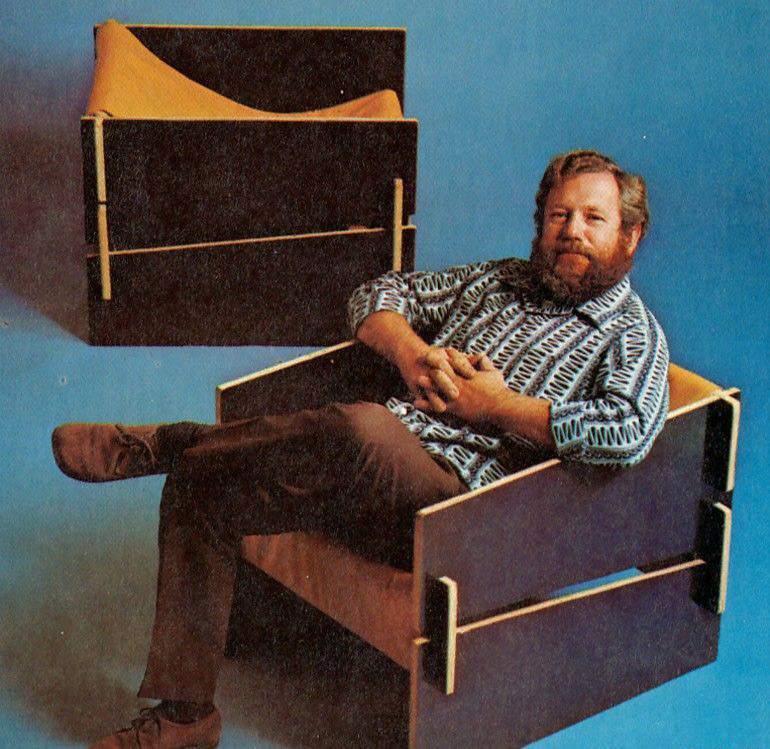 Don’t let his façade of comfort and relaxation fool you.  Those “armrests” are going to leave a mark. 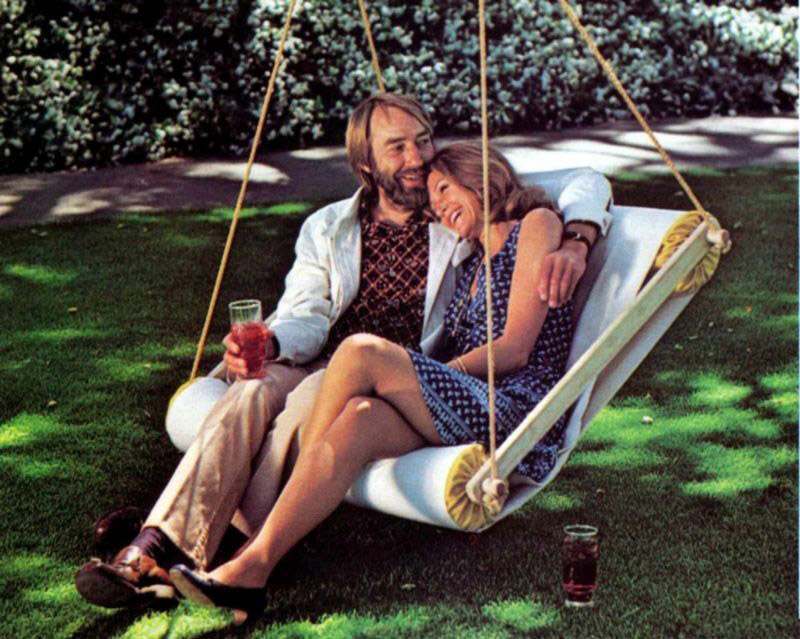 I’m sure this thing spun around dizzily, spilling and knocking over drink.  I’m also sure there was sweet, sweet lovin’ to be had.  This man already seems distracted by the prospect. 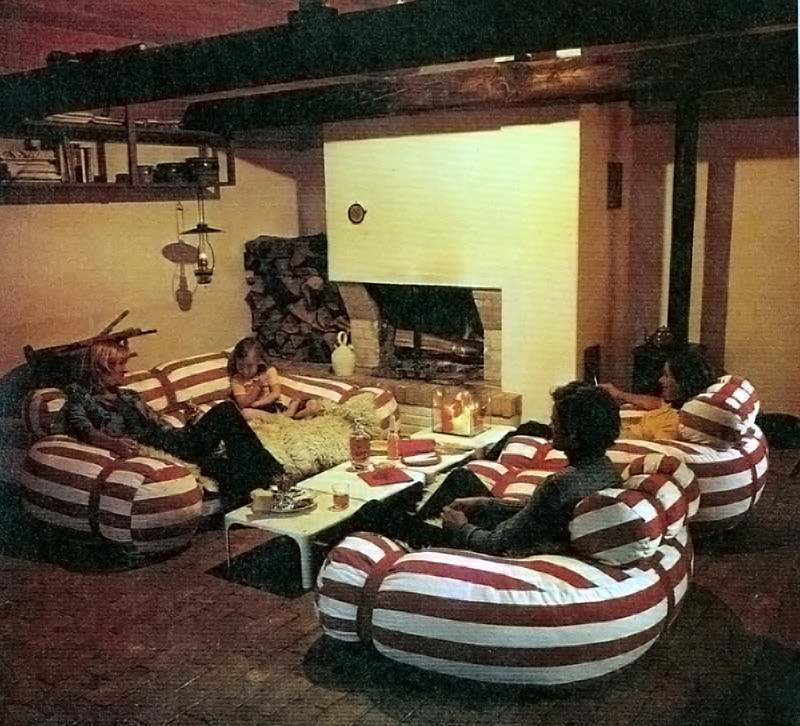 These chairs are a roundhouse kick to the eyeballs.  These chairs go with the rustic décor of the room like milk and fish sticks, like licorice and heart medication, like Israel and Palestine….. er, like two things that don’t go together. 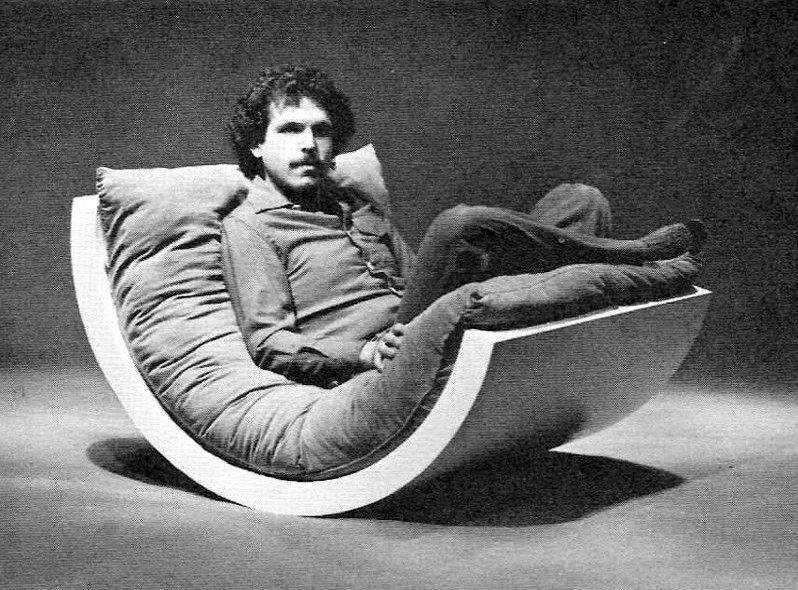 I’d recommend this chair only for those with severe scoliosis.  Also appropriate for children and Hobbits. 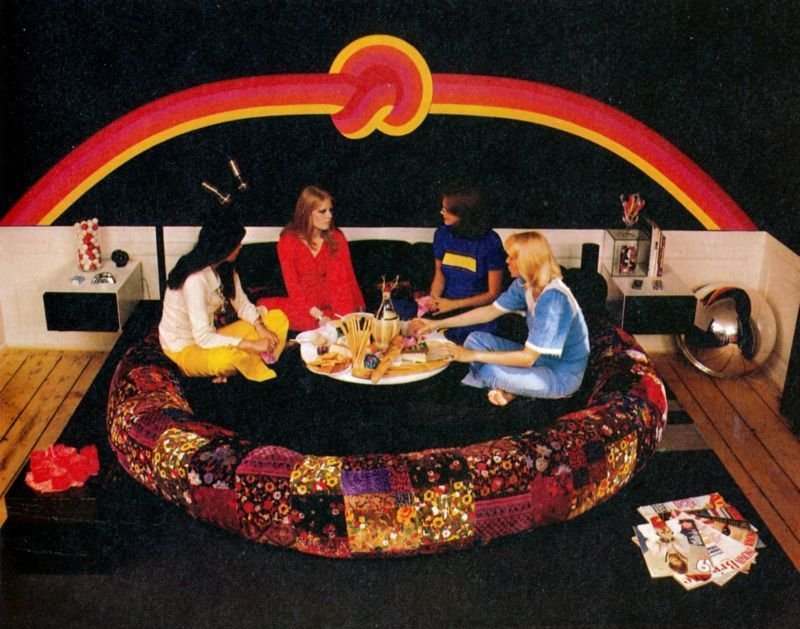 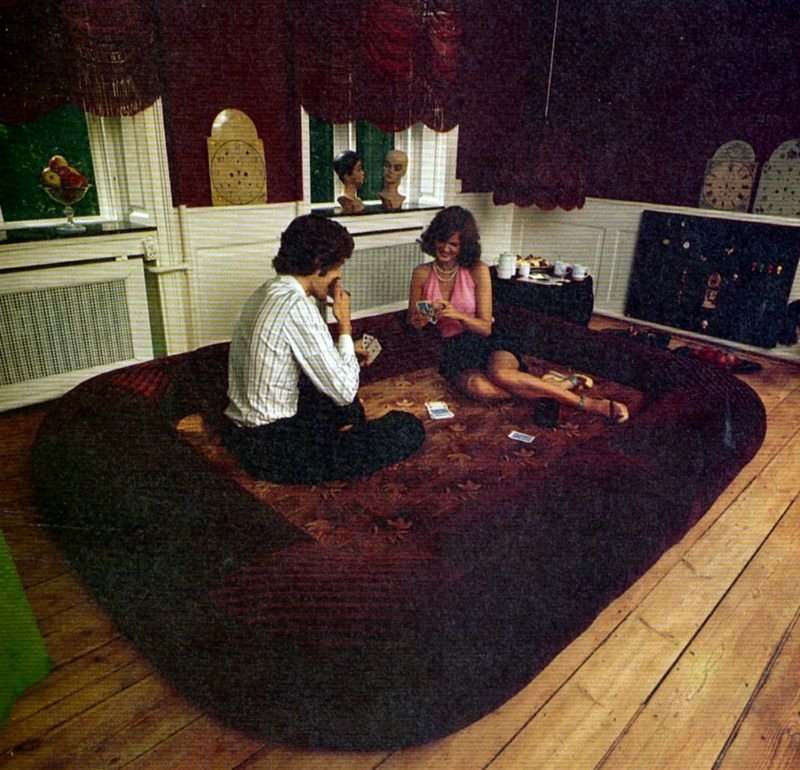 Seventies couches were literally engineered to accommodate frequent and vigorous lovemaking.  The amount of DNA on that “couch” boggles the mind. 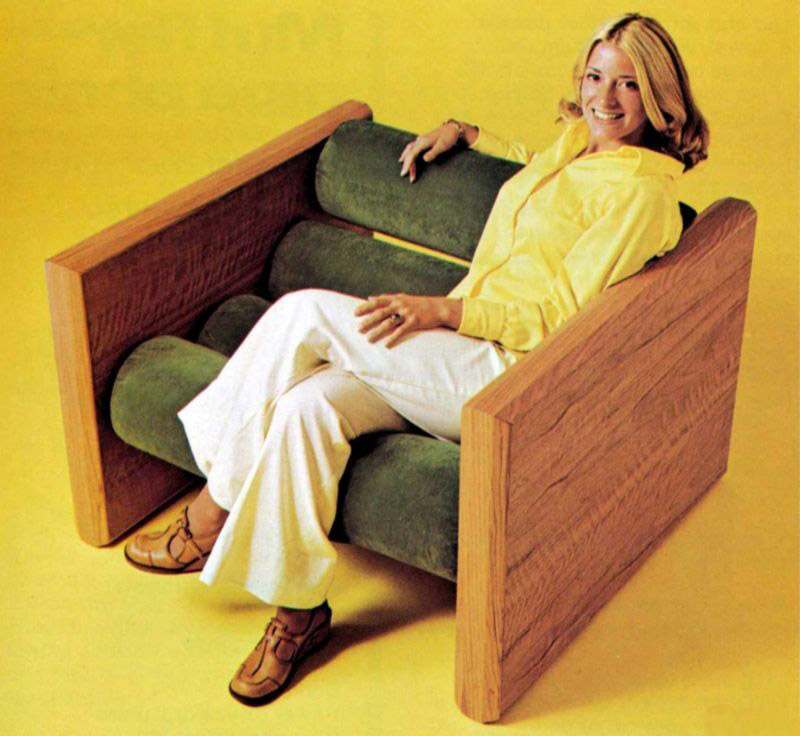 Most of strange seating thus far was not found in your average Seventies home.  Most households had your standard variety chairs.  That being said, I do remember the chair above from my local library, so some of these oddities did make it to Main Street. 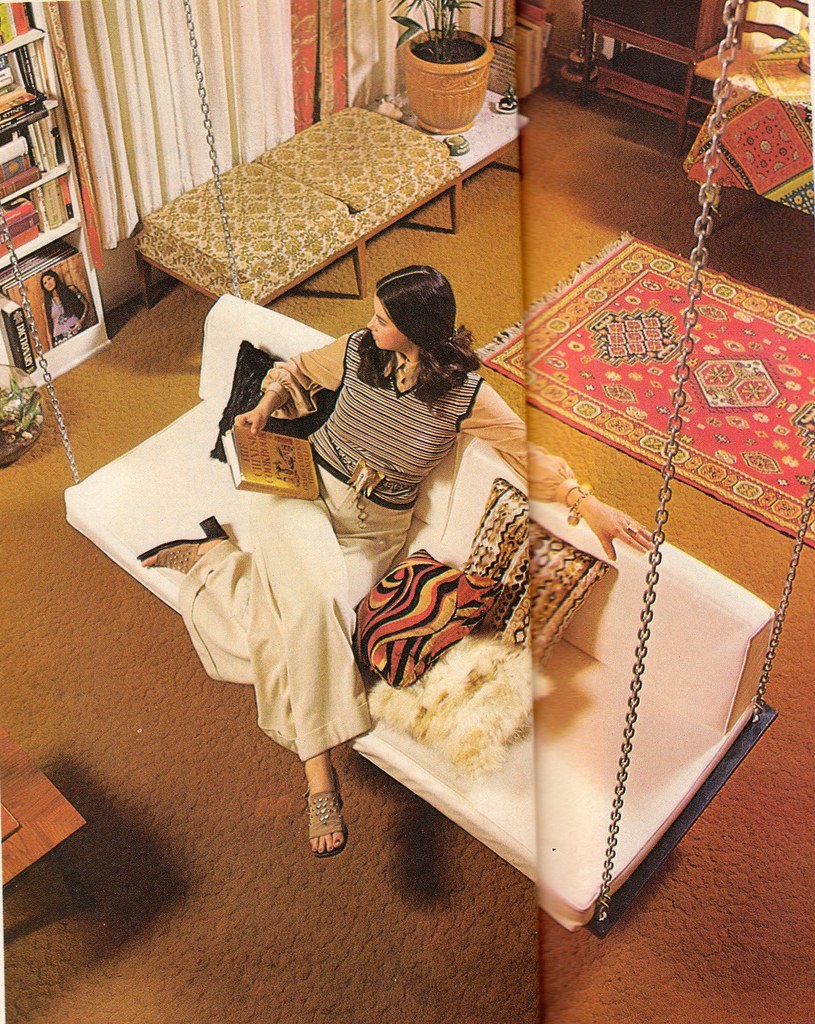 What the -? A porch swing in your living room? After the crackdown on marijuana in the 1980s and the smoky haze began to lift from the populace, I wonder if the Boomers just looked at their living rooms and thought “WTF happened?” 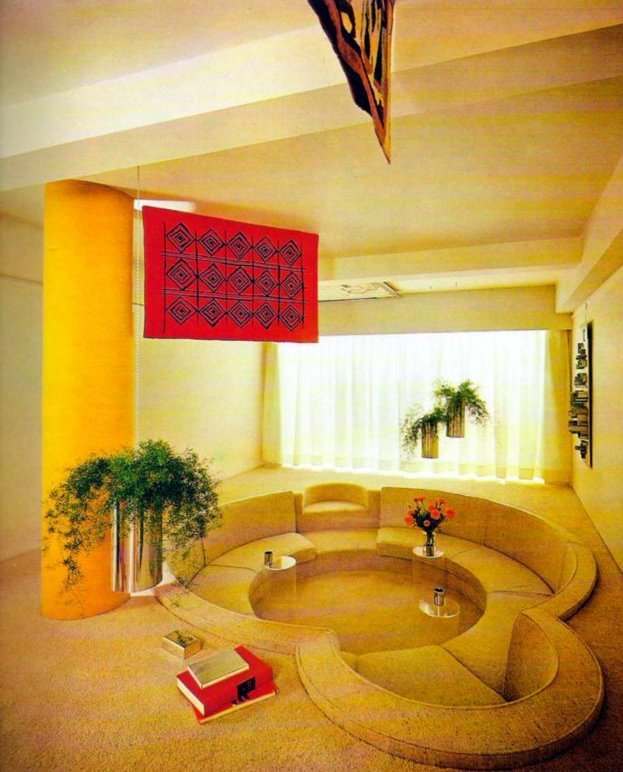 The infamous conversation pit (AKA Convo-pit).  If there’s one thing I’d like to resurrect from the Seventies it’s this. 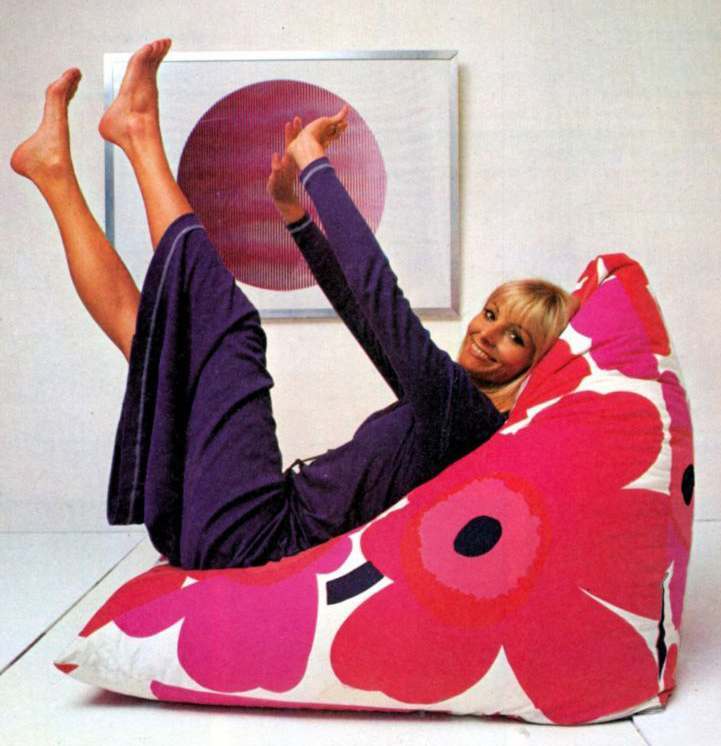 Don’t let her smile fool you.  Life on this chair is an annoying state of constant “slide prevention”.  The ergonomic movement began to get traction in the Seventies; hence, the experimental shapes of some of these seats.  However, I can’t help but think this one created more back pain than it helped.

This is what constructing one of these chairs must have looked like…. 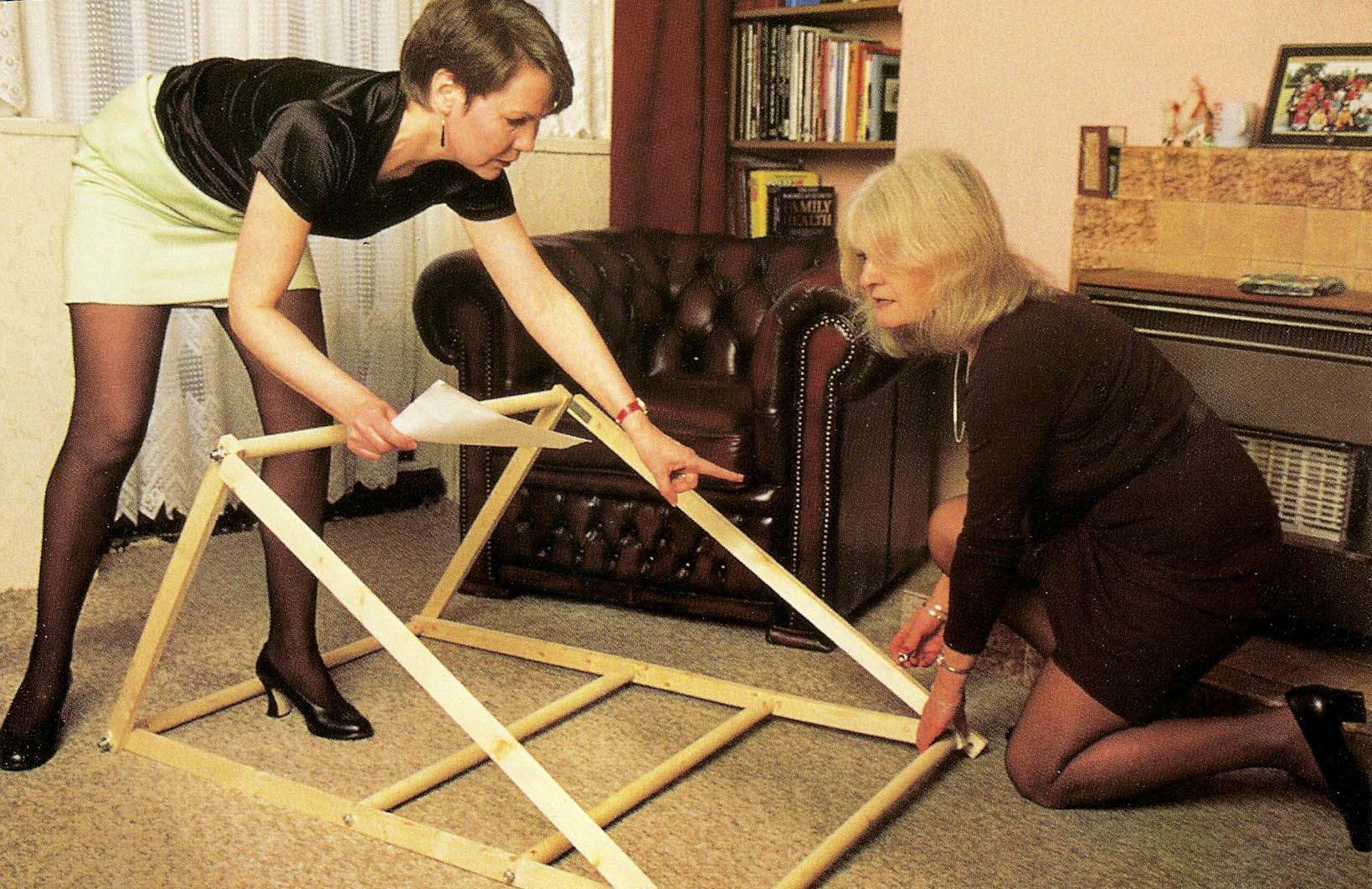 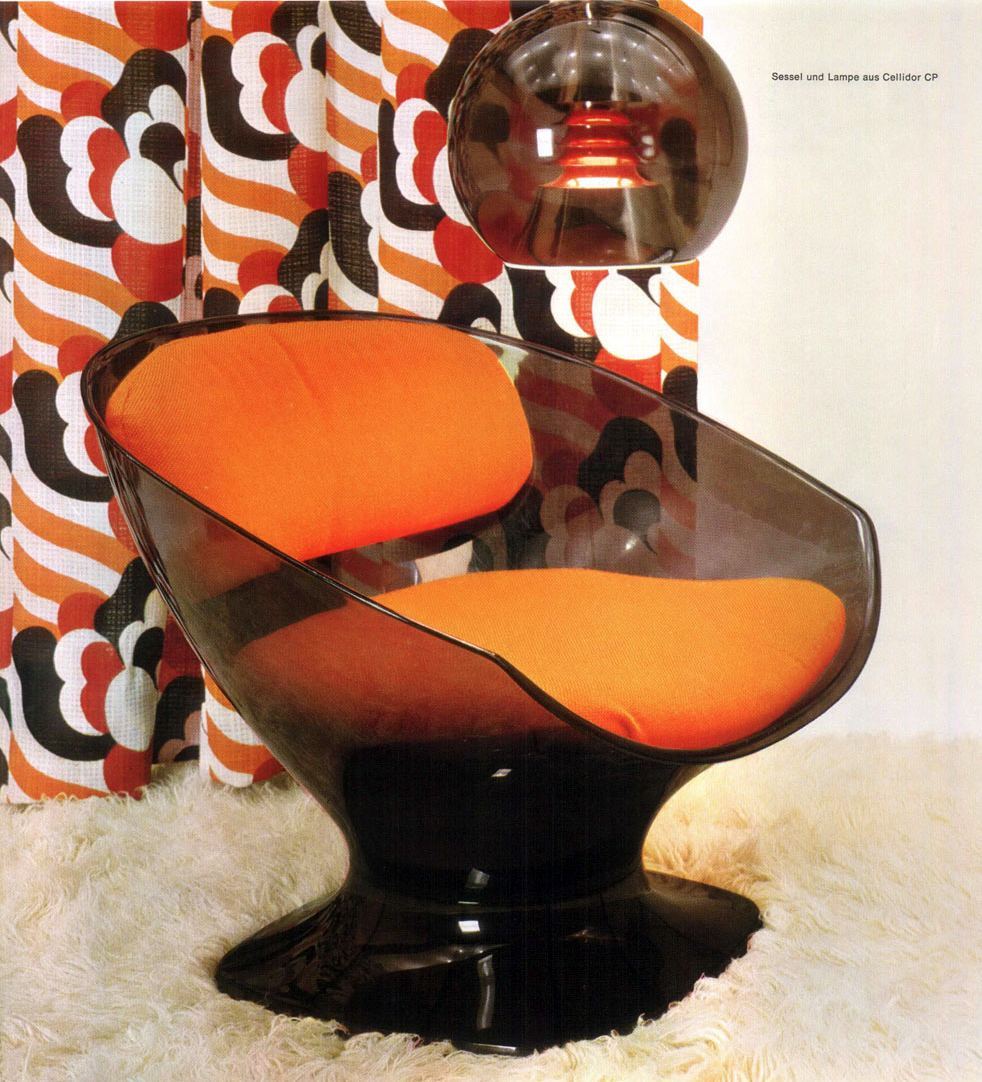 Behold the space-age chair nestled on a deep carpet of shag.  Bow your head for a moment of silence.

Office chairs also started to get a facelift.  The chair above may look yawn inducing today, but was a miracle of ergonomic functionality in the early Seventies. 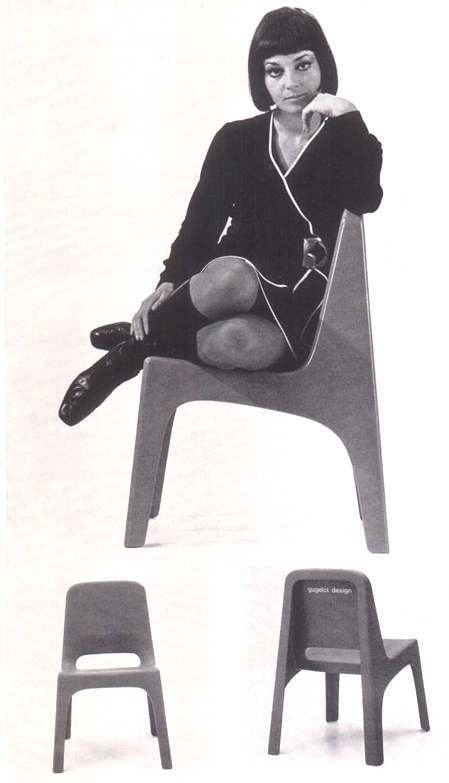 Another innovation that arose in the late Sixties and became commonplace in the Seventies was the use of synthetic material for furniture.  Thus, you have these one-piece creations that shocked and horrified craftsmen the world over. 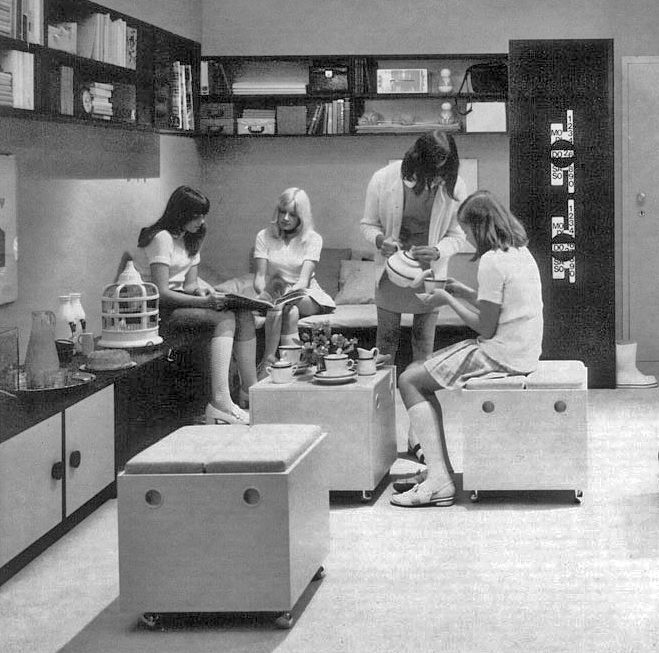 Speaking of discomfort…. nothing is worse than comfort sacrificed for style.  Cubes may look nice (especially when there’s a male fantasy about to take flight, as in the picture above); however, the human physique is not designed to sit upon cubes. 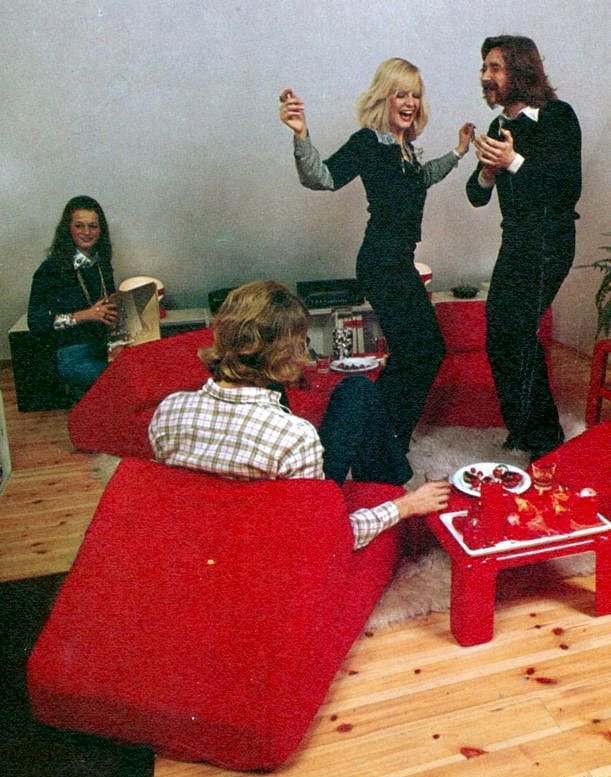 Yes, these innovative chairs made life in the Seventies fun and fancy free…. well, tons of recreational drug use and constant sexual activity also helped. 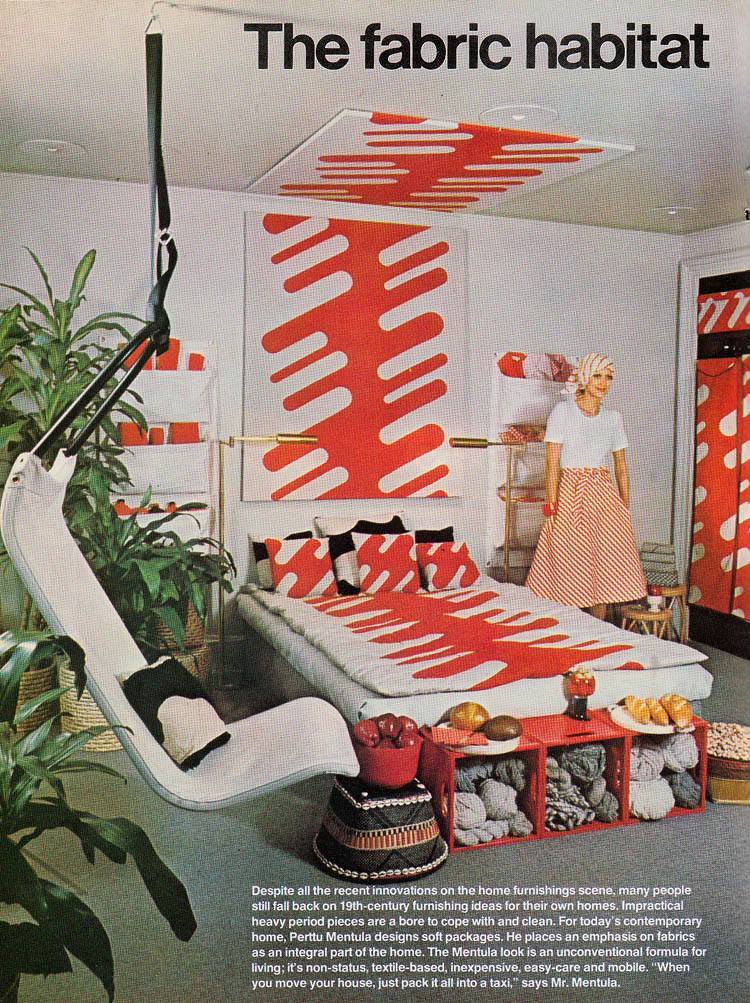 “Despite all the recent innovations on the home furnishings scene, many people still fall back on the 19th century furnishing ideas for their own homes.  Impractical heavy period pieces are a bore to cope with and clean….  The Mentula look is an unconventional formula for living; it’s non-status, textile-based, inexpensive, easy-care and mobile. ‘When you move your house, just pack it all into a taxi,’ says Mr. Mentula.”

Somehow, I don’t see fitting that bizarre chair contraption into the back of a cab. 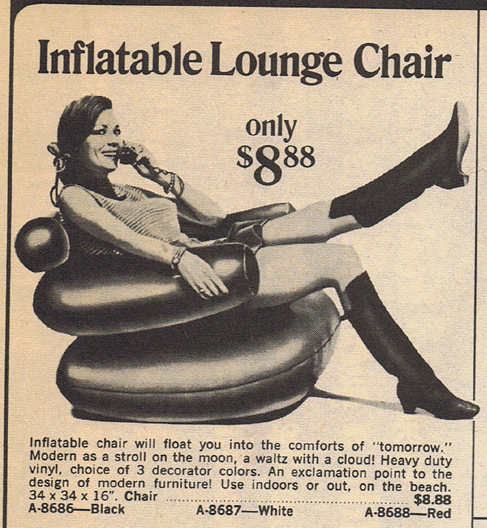 “Inflatable chair will float you into the comforts of ‘tomorrow’.  Modern as a stroll on the moon, a waltz with a cloud!”

What does this even mean? 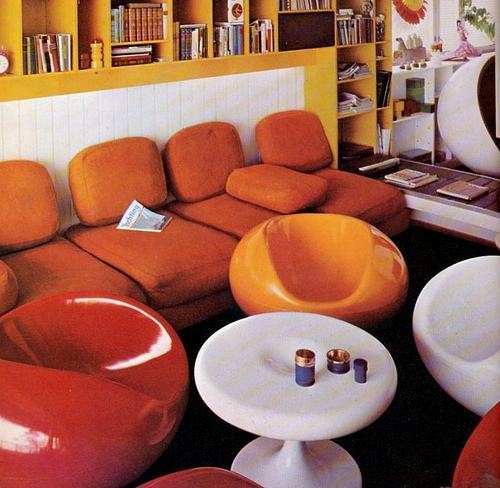 Looks like the perfect place to sit back and light up a joint cozy up with a good book. 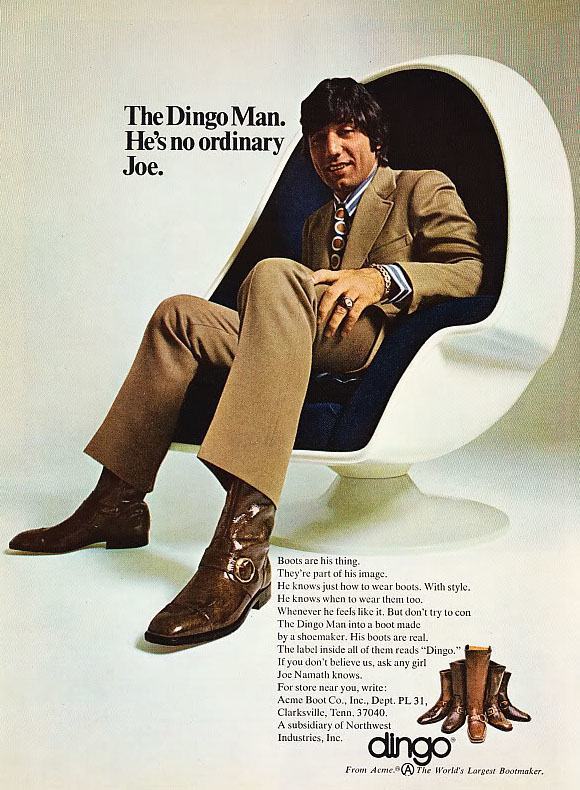 The egg-chair found its origins in the late 1950s, but the design was kicked up a notch with headrest speakers in the 70s.  Imagine listening to your Blue Oyster Cult 8-track inside one of these babies. No self-respecting stoner was without one. 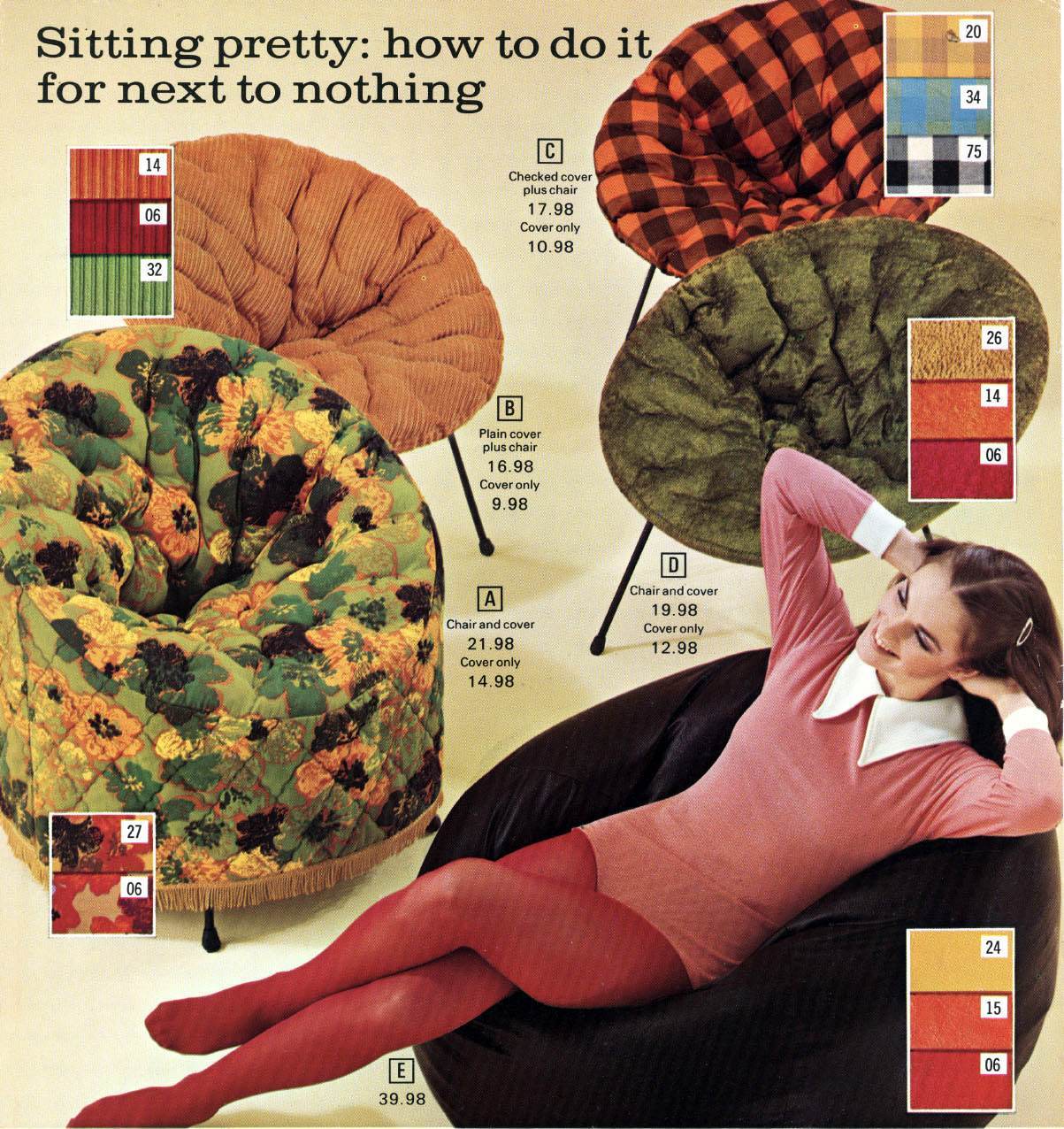 Many of you will recall the Papasan chair – it hit the US in the 1950s, but didn’t get popular until the 1970s.  They’re still around, but their heyday is over.

Not so many of you will recall what the hell this chick is wearing.  For a refresher on the “bodyshirt” see a previous article.  Unfortunately, it won’t provide an explanation as to why the catalog chose to have her wearing one to model a chair. 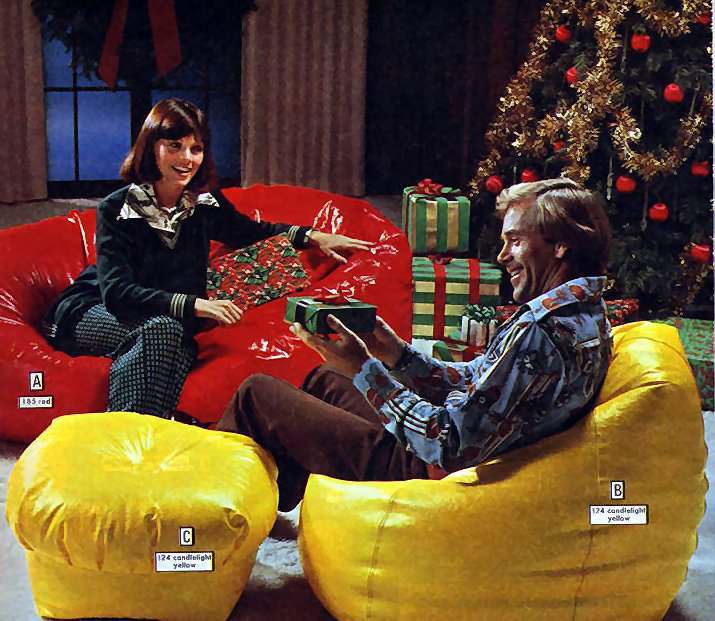 Then there is the Mother of All Seventies Chairs – the beanbag chair.  For a time, it seemed every living room had one, forever spilling their Styrofoam pellets into the carpet.  While they’re comfortable for kids, adults often found themselves awkwardly contorted, with one wrong move resulting in a humiliating dump upon the floor.

No, the winner for Ultimate Seventies Chair will not go to the beanbag.  Instead, it shall go to The Softcore… 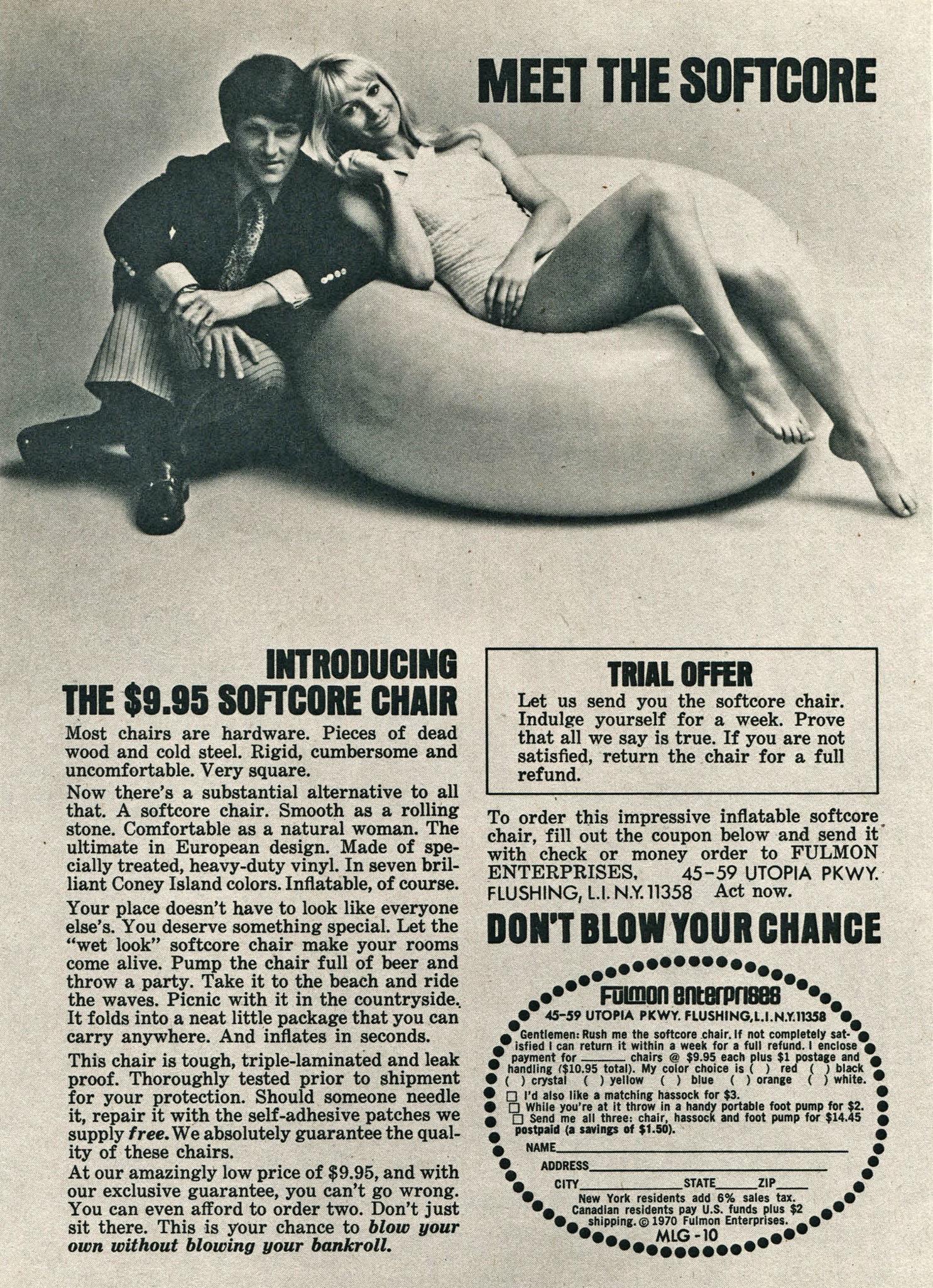 Now there’s a substantial alternative to all that.  A softcore chair.  Smooth as a rolling stone.  Comfortable as a natural woman….

Your place doesn’t have to look like everyone else’s.  You deserve something special.  Let the ‘wet look’ softcore chair make your rooms come alive.  Pump the chair full of beer and throw a party….”

I think we’ll end here.  After all, how can you top that?