To define it simply, fascism is a brand of authoritarianism in which a dictator and his government control all aspects of the citizenry, widely squelching disagreement and opposing points-of-view.

A fascist state pursues imperialist policies as a means of encouraging unity and patriotism among its people.  One key idea of fascism is the promotion of a certain class of “superior people” over “inferior” elements. As a rule, fascism is extremely dismissive of pluralism, multi-culturalism, and diversity.

To accomplish its goals, a fascist government emphasizes the positive benefits of violence. The weak must be purged, and the strong promoted. Also, a fascist state relies on propaganda to control its people, and this propaganda is basically a three-headed hydra.

First, such propaganda relies on the idea or legend of a re-birth or restoration, a State emerging from a time in which it was weak and diffident. But now it is powerful.

Secondly, a fascist state feeds on deep feelings of nationalism or patriotism to foster unity, as noted above. It helps to galvanize the people if they believe an enemy is knocking at the gates.

Because of fascism’s terrifying rise in Europe in the 1930s and 1940s and the cost in human lives to stop its global march, it remains the ultimate nightmare for many artists and filmmakers.

Given the right set of circumstances — and the right demagogue — our leaders can be replaced by authoritarian strong men like Mussolini or Hitler.

In the twentieth century, the anti-fascist work of art has popped up several times to remind the American citizenry the importance of vigilance.  Below are four notable examples: 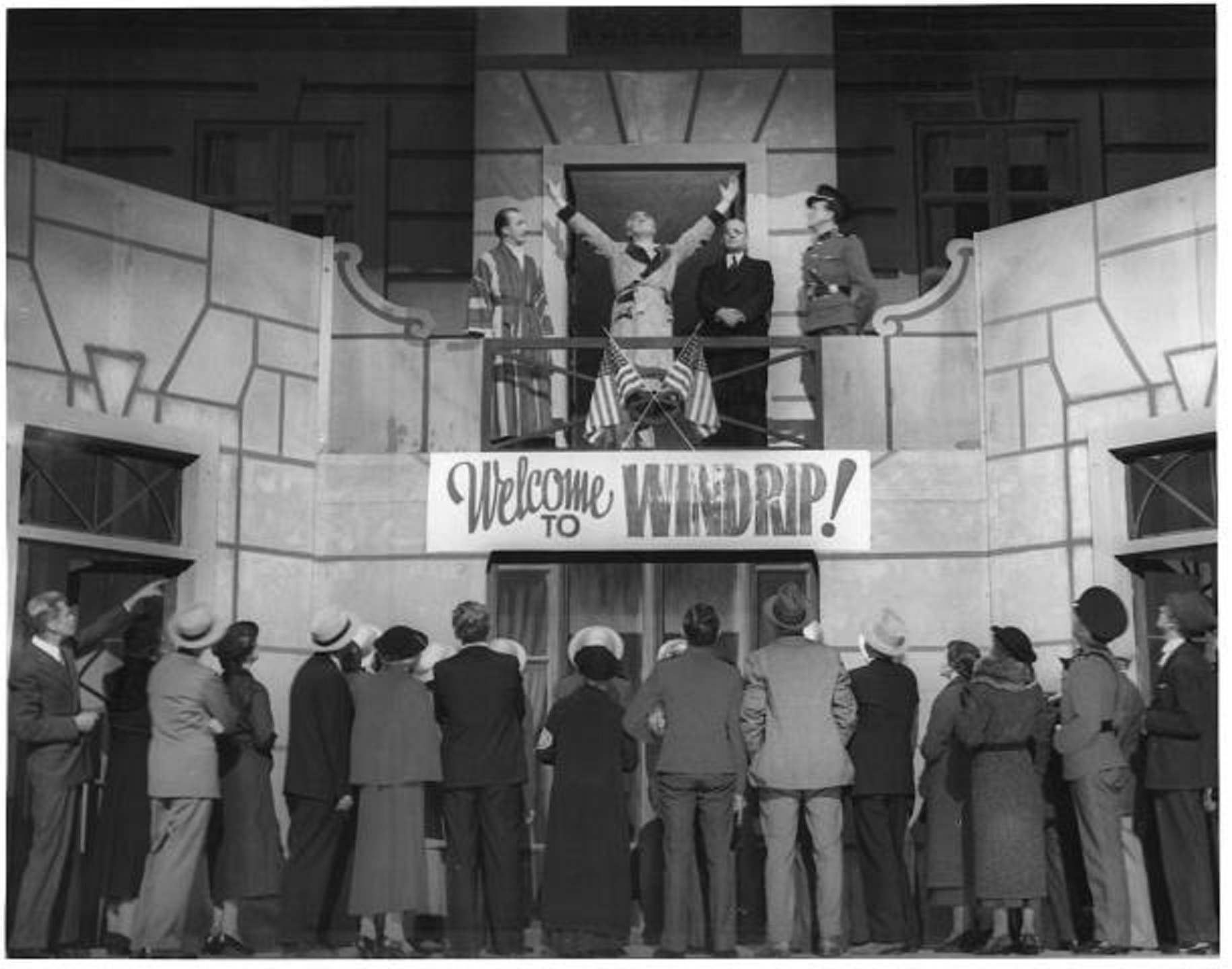 This novel is set during the election of 1936, and focuses on a journalist named Jessup as he watches national events unfold in a terrifying way. A Democratic candidate, Berzelius “Buzz” Windrip” secures the nomination for the presidency (defeating FDR in a primary) and then  wallops Republican candidate Walt Trowbridge in the general.

After Inauguration Day, folksy Windrip declares martial law, relegates the Supreme Court and Congress to advisory status, and unlooses his armed “Minute Men” militia upon the country. American citizens who protest are sent to labor camps while Windrip systematically scapegoats Jews, blacks, and women for the nation’s troubles.

One of the key conceits of It Can’t Happen Here is that American fascism will be cloaked in different trappings than we saw in Europe. If it rises in the U.S according to Lewis, it will do so draped in militant Christianity and fronted by a candidate boasting a “folksy,” tell-it-like-it-is manner.

Windrip’s folksy characteristics purposefully align him with the poorly educated “common men” who support him. Like them, he has a disregard for learning and flaunts a no-nothing attitude. For instance, Windrip decries diplomacy, calling it “talky-talk” and notes that America is only “wasting our time at Geneva.” When he complains and bullies the press, he refers to journalists as “wishily-washily liberal.”

The new President of It Can’t Happen Here also derides so-called elites in other ways. He dislikes “haughty megapolises” such as New York, and to assure that the intelligentsia doesn’t get out of hand he even re-writes college curricula to be “entirely practical and modern, free of all snobbish tradition.”

Very significantly, Windrip’s platform demands the absolute freedom of religious worship, and targets certain demographics.  Women, for instance, may work as nurses or in other “feminine” settings such as “beauty parlors,” but otherwise must return to the home to raise children.

African-Americans, meanwhile, are to prohibited from “voting, holding public office, practicing law, medicine, or teaching any class above the grade of grammar school.”

As mentioned above, absolute freedom of religious worship is protected in Windrip’s America, but there’s an important caveat. No atheist, Jew, or “believer in Black Magic” shall be able to hold office until first swearing allegiance to the New Testament.   In other words, you have to be a Christian to enjoy absolute religious freedom in Windrip’s America.

Fascism thrives, Lewis’s timeless book suggests, when there is an enemy to hate, and an “inferior” to lord it over. 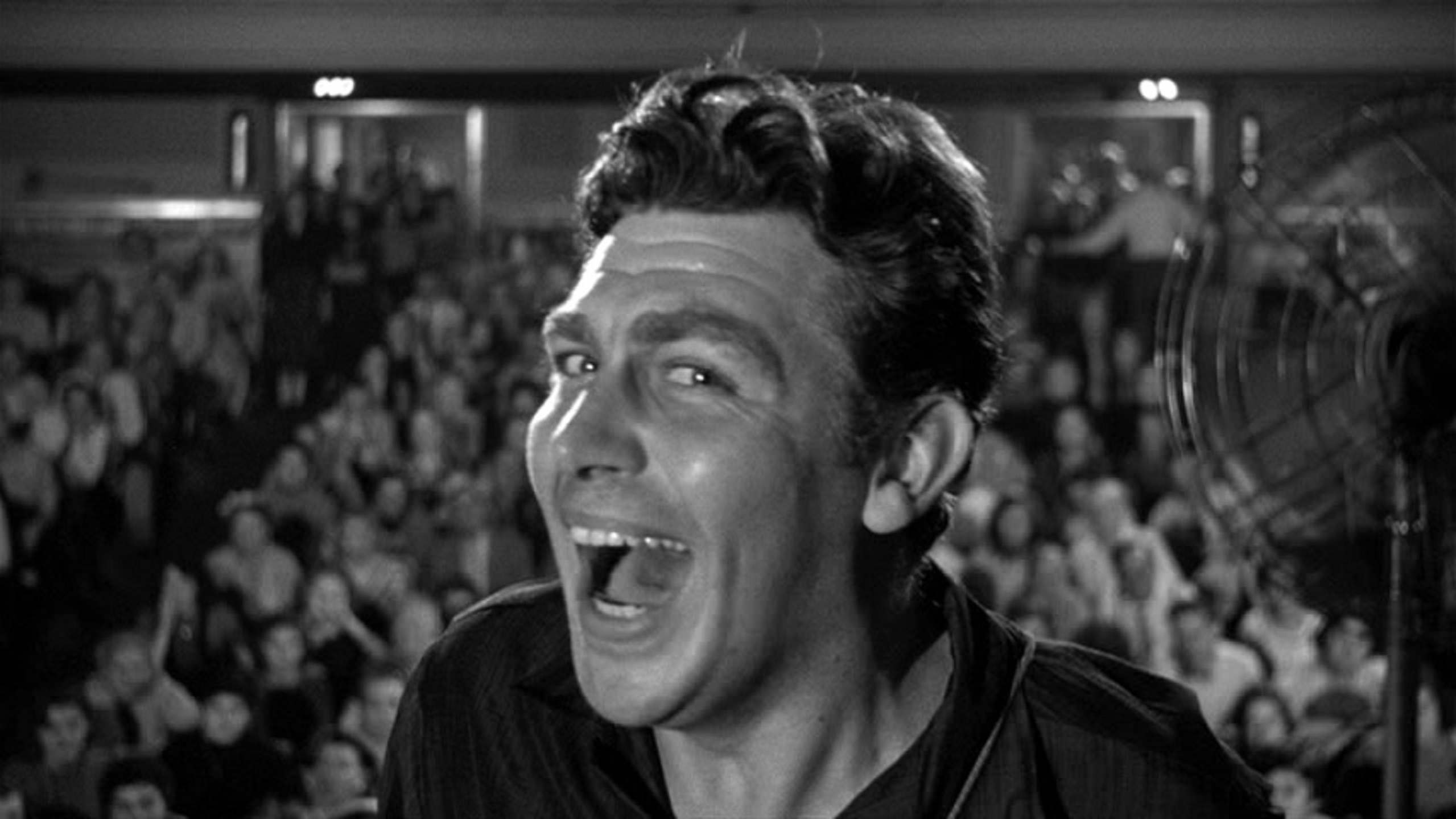 Plucked from obscurity in an Arkansas drunk tank to host a local radio show, the folksy, home-spun Rhodes proves so popular that soon he’s on TV, and then hosting a political show — Lonesome Rhodes’ Cracker Barrel — out of New York City.

There, he grooms a Senator, “Curly” Fuller, to imitate his own colorful brand of “common sense” communication. Before long, the two men are talking on TV about how Social Security cripples, weakens, and entitles people, and how the American people should cling to their guns against “big government.”

Rhodes grows in power throughout the film, and so Kazan warns his audience about the power of television: a mass medium of persuasion.  Soon, Rhodes is backed by a shadowy and wealthy general who realizes that the “elite” can manipulate and “guide” the people — “the herd” — with someone like Rhodes to command.

Rhodes has a weekly audience of 65 million, is billed as “the voice of the grass-roots,” and he champions the poorly educated.  “There is nothing as trustworthy,” he suggests (via a banner) as “as the ordinary mind of the ordinary man.”

Rhodes soon sees the sky as the limit and notes that “this whole country’s just like my flock of sheep.” For that flock’s approbation, he drapes himself in false piousness saying things like ‘the family that prays together, stays together…”

Rhodes soon advises Senator Fuller to turn his position papers into snappy slogans, into capsules that can easily be digested by the poorly educated. Basically, Lonesome Rhodes demonstrates how the media is complicit in the rise of a demagogue, or a fascist leader.  Ostensibly a man of the people Rhodes is actually “uncooperative and unpredictable.”

Fortunately, Rhodes is undone by his former friend, Marcia (Patricia O’Neal), who exposes him on live TV to his audience. She turns the sound up on his stage, as he rails there against the dummies who believe every word he says.

“I can make ‘em eat dog food like it is steak!” he insists.

That’s the way to destroy a demagogue, the movie tells us. To expose him, to “let the public see what a fraud he really is.”

“When we get wise to him, that’s our strength,” the film concludes. 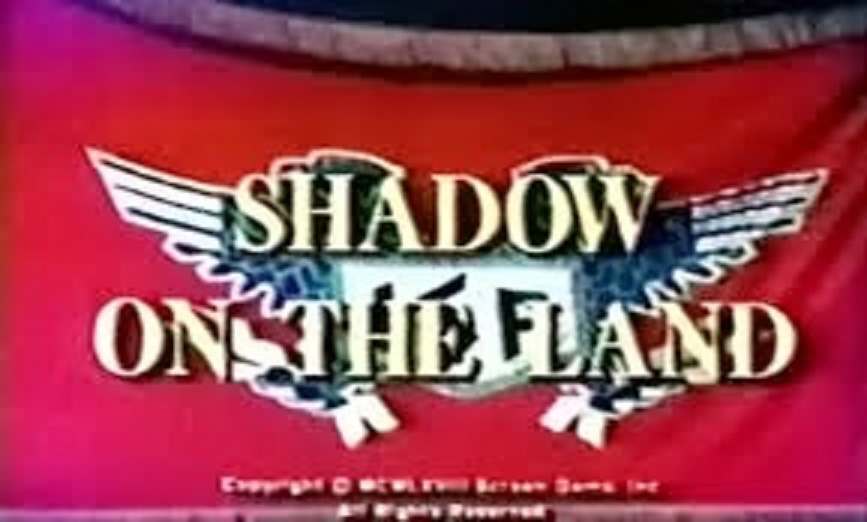 This obscure TV-movie created by Sidney Sheldon and written by Nedrick Young imagines the rise of a fascist, totalitarian dystopia in America.  In essence, i’s a 1960s TV variation on It Can’t Happen Here.

In Shadow on the Land, The United States has been a dictatorship for some forty years, ever since the country’s Leader exploited a national emergency (“riots in the ghetto” according to the screenplay) to seize total control of the nation and declare martial law.  The terrified people gave the Leader “a blank check.”

Over the years since the takeover, “discipline” has replaced “freedom” in America as an ideal.  Dissenters — part of an organized resistance group called “Society of Man” — are sent to detention camps where they are they are beaten and tortured.  The police force, the ISF, is ubiquitous and well-armed.

The TV-movie ends without a real resolution, with fascist America still in power, but those who watched the telefilm in 1968 have never forgotten it. 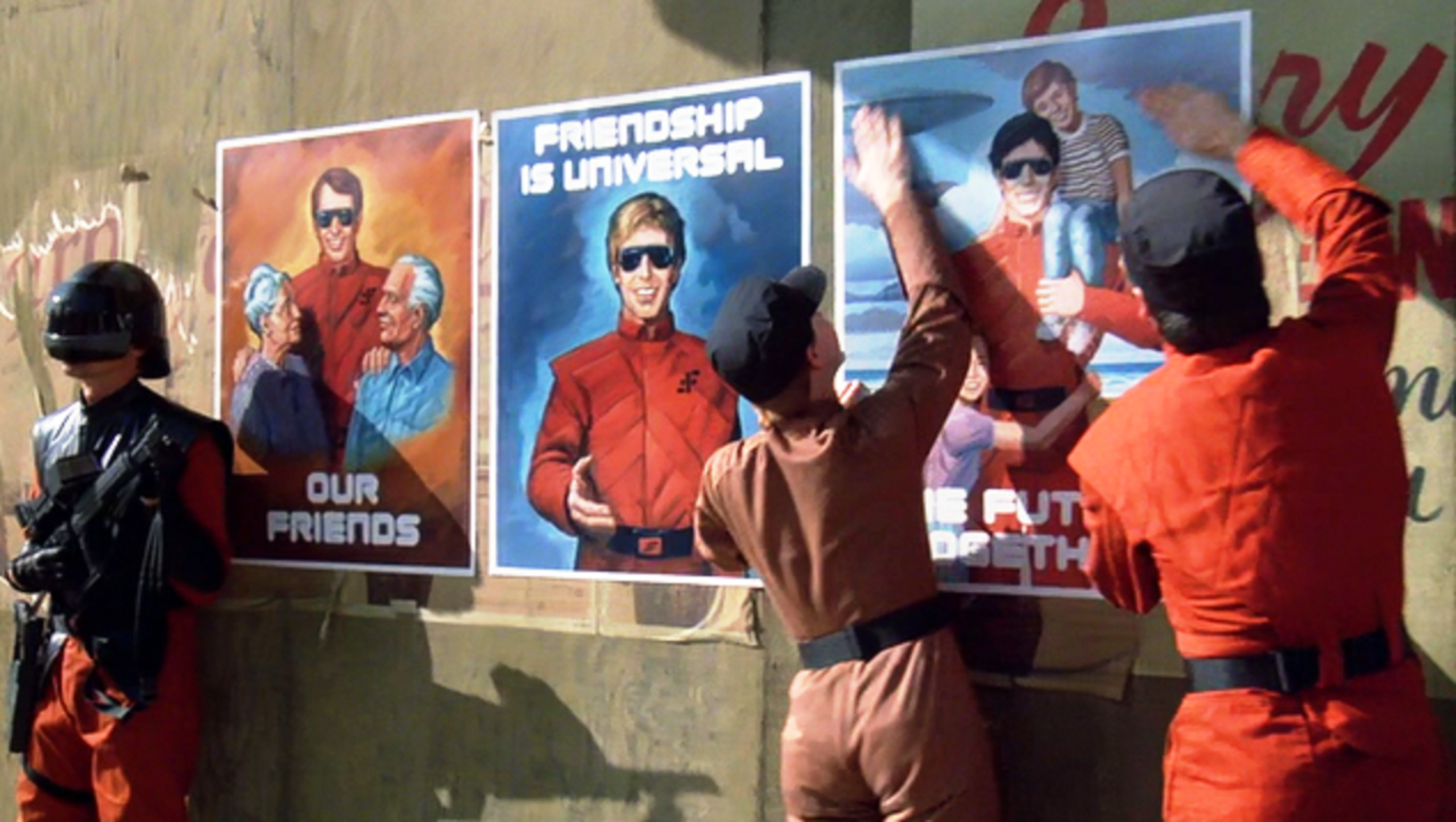 On the surface, Kenneth Johnson’s mini-series V is about an alien invasion. But scratch that surface just a little, and one can see it is really about a fascist takeover of America.

Reflexive, layered, and buttressed by book-ending visuals which champion the dedication of the “resistance fighter” (to whom the film is dedicated…), V acutely diagrams how fascism comes to the land.

It does so, we see in the production, through three avenues: scapegoating, propaganda, and declarations of emergency that effectively cloak the consolidation of control.

Because — as Ronald Reagan once noted “freedom is more than one generation away from extinction,” — V serves as frightening, thought-provoking, and scarily plausible cautionary tale, even with all its spectacular outer-space trappings.

In terms of the individual people and their responses to fascism, V shows us that there are collaborators in industry and in the media. They choose to cooperate with the alien fascist Visitors for wealth and access, respectively.

Other individuals are deniers. They don’t recognize — or don’t want to recognize — what is happening to their country, until it is too late.

Kenneth Johnson’s point seems to be that freedom is lost, and fascism can indeed “happen here” both when selfish people collaborate with the enemy for purposes of power and wealth, but also when good people choose to look the other way, to deny what they are seeing.

On the other side of the spectrum are those who resist the Visitors. They have identified the Visitors’ sinister nature, and will not let freedom and liberty die without a fight.

Finally, there are the human beings who do not have a choice about resisting. They have been targeted and scapegoated by the Visitors because they pose a threat to Visitor rule. In this case, the scapegoats are scientists.

These scientists — the Maxwell family in particular — are explicitly designed as stand-ins for Jews in Nazi Germany. Like Anne Frank’s family, they are forced to go into hiding lest they be turned in.  Other scientists are rounded up, and taken to Mothership, where they await death.

When fascism rises, V reminds us, the establishment needs to focus the people’s rage on scapegoats.

And if good people do nothing, such a terror can — and will — happen here.