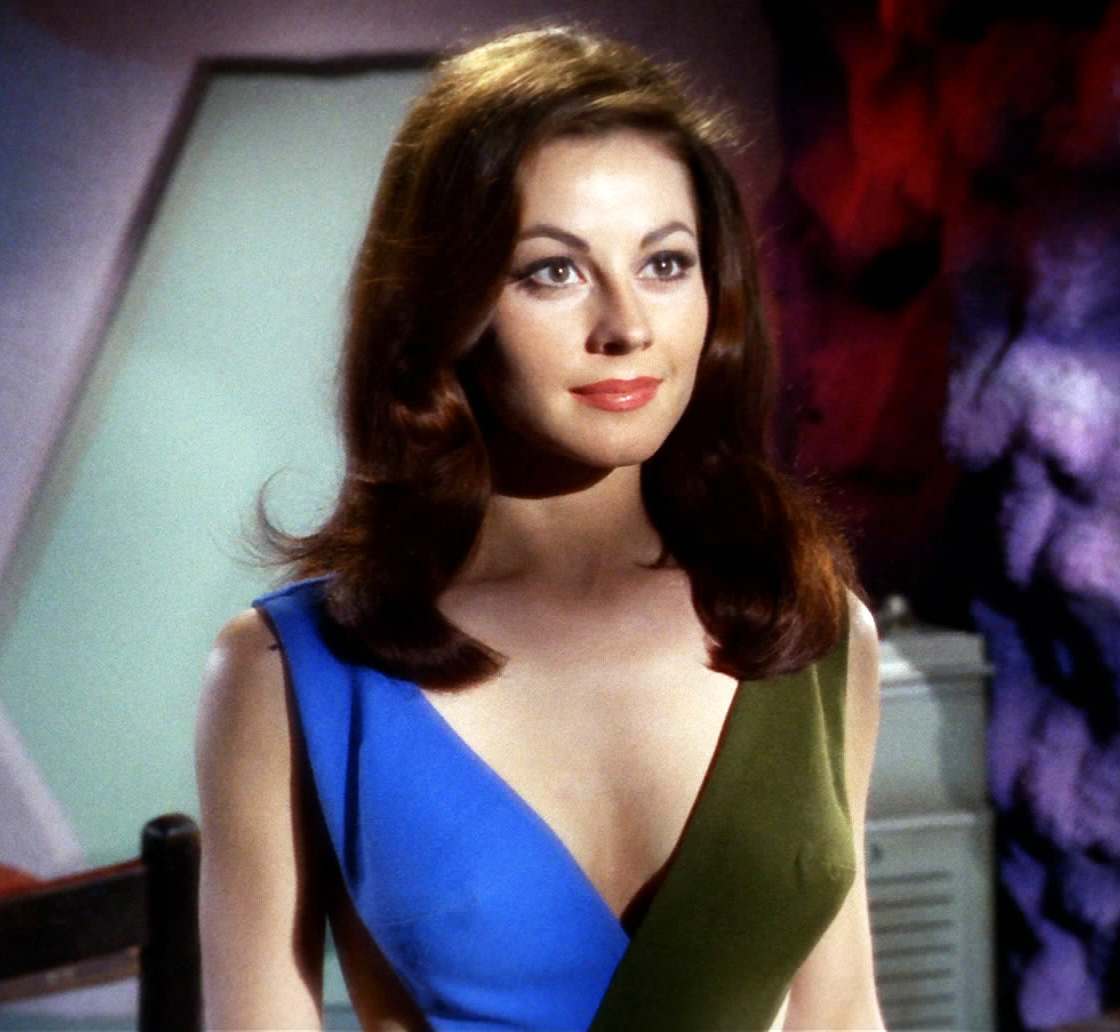 Although androids have frequently appeared as regular characters on sci-fi TV programs (Logan’s Run [1977], Star Trek: The Next Generation [1987-1994], Mann and Machine [1992]), it is their frequent guest appearances that have often remained among the most haunting.

In particular, TV androids seem to have a terrible lot when it comes to love.

You probably know the story by heart: These unlucky androids begin to develop human emotions — love, loyalty, and compassion — and then, suddenly, they die. 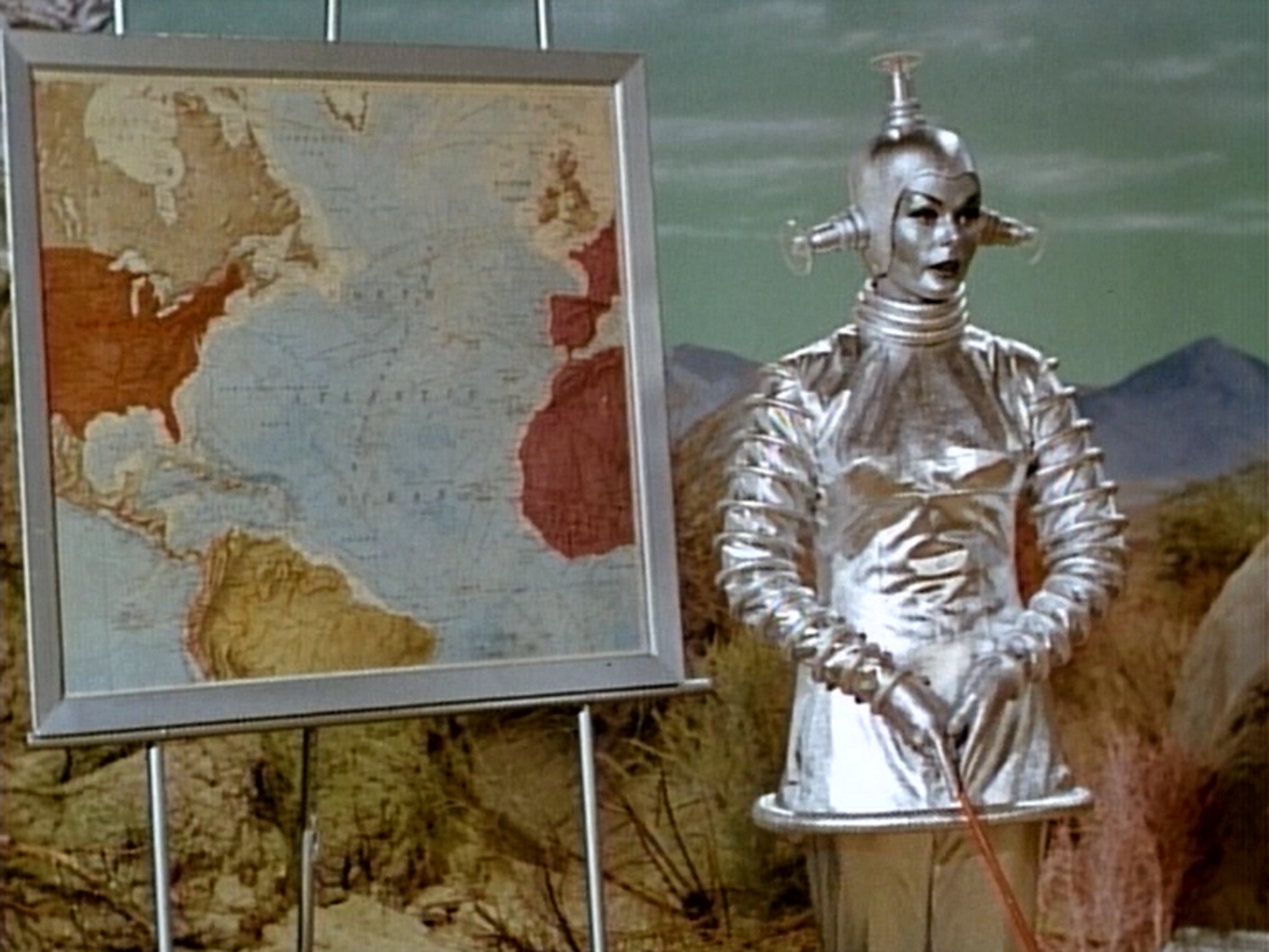 Indeed, the presence of human emotions seems to cause terrible malfunctions in TV’s android personalities, malfunctions such as “cascade failures” in their “Positronic brains,” leaving those who love them heart-broken and alone.

Also, notice just how often these historical androids happen to be beautiful women…

With that thought in mind, here are some of the most memorable and tragic androids in cult-TV history. 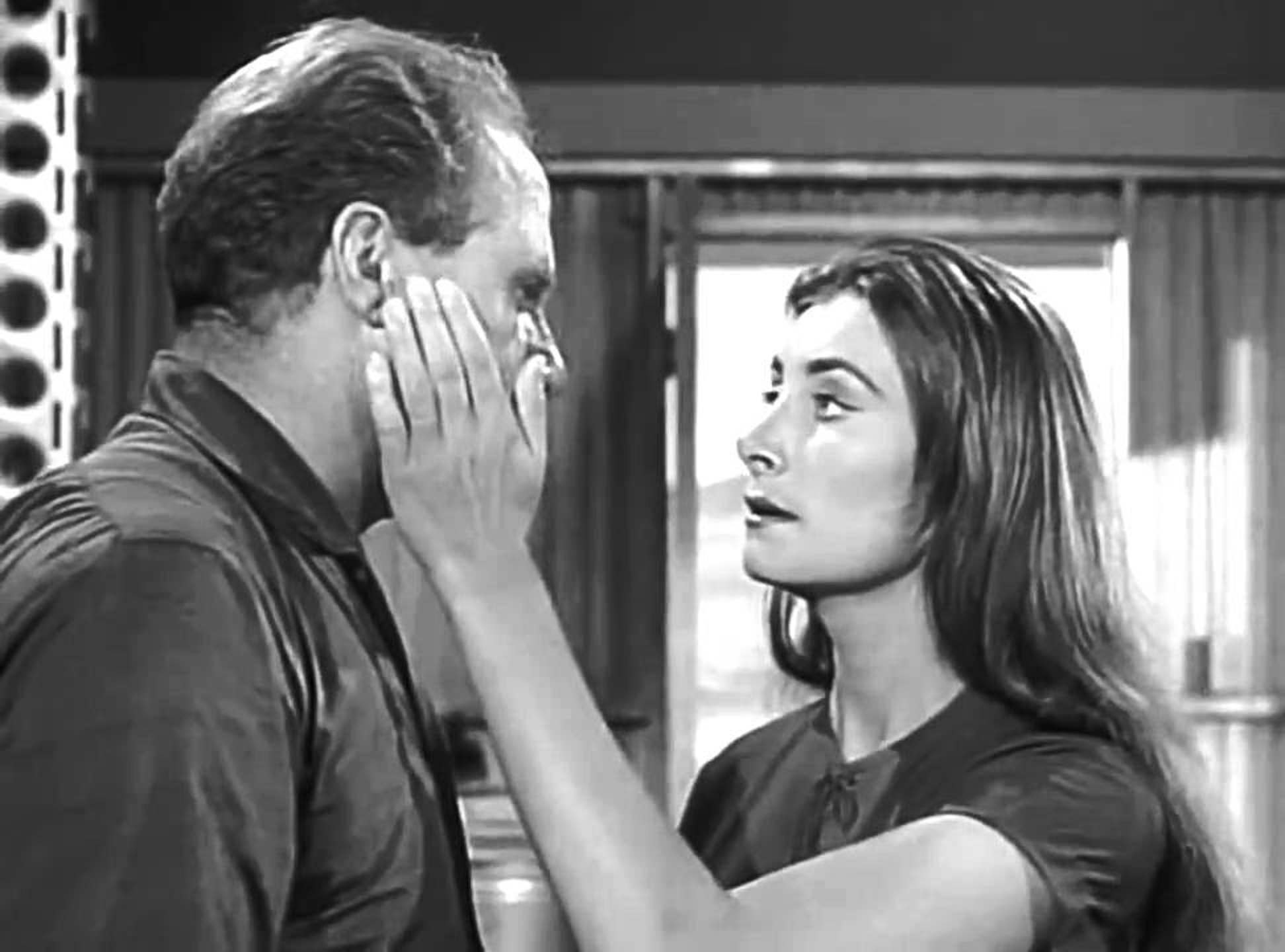 In The Twilight Zone’s (1959 – 1964) early episode “The Lonely, a convict named Corry (Jack Warden) on a far-off asteroid prison is given the unexpected gift of a companion: an android in female form named Alicia.

At first Corry resents Alicia because she is not human, not “real.” When she cries, however, and demonstrates human tenderness, he cannot help but fall in love with her.

Soon, however, Corry’s prison sentence is up, and Alicia cannot return on the rocket back to Earth. The ship cannot take the weight of an additional adult being. Corry refuses to depart without Alicia, and the rocket’s captain — determined to see Corry come home — destroys her…leaving her body on the barren asteroid.

In this case, the beautiful and female android learns to love a human man, and even survives the experience, but it does no good. Alicia is not treated as being truly alive by other humans, and gets a bullet to the face, a bullet that reveals her mechanical innards and status as “other.” 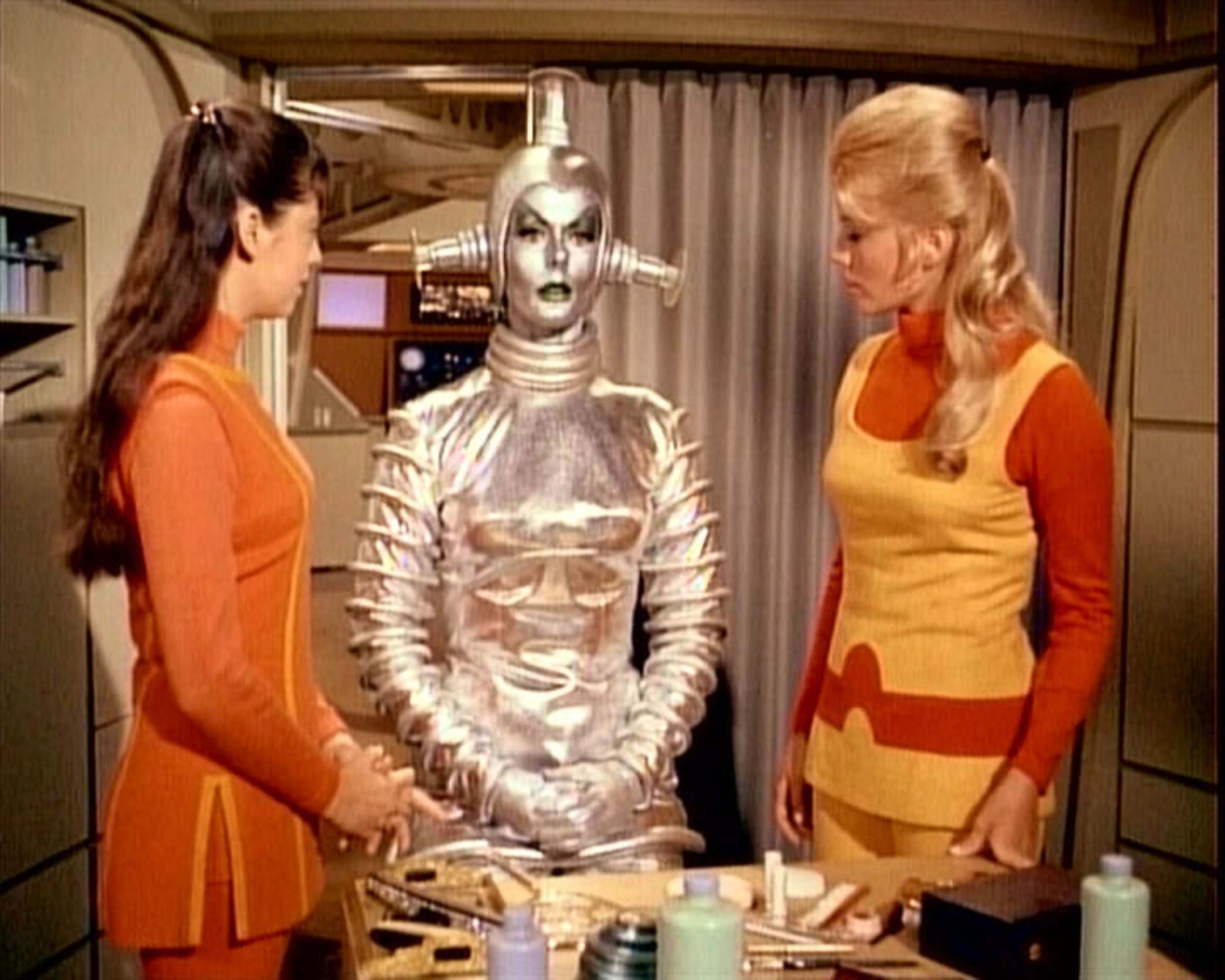 In the Lost in Space (1965-1968) episode “The Android Machine,” Dr. Smith (Jonathan Harris) orders an android from a strange vending machine mysteriously left on the planet where he and the Robinsons are stranded.

Almost instantly, Verda the Android materializes.  She is dedicated to serving Smith, but bungles a foot rub, earning his wrath.

Smith and the Robot, B-9, take a real disliking to Verda, but she soon learns human emotions from the Robinsons.  Verda learns to cry (like Alicia in “The Lonely”) and learns about the concept of self-sacrifice when she must save Penny (Angela Cartwright) and Will (Bill Mumy) from a monster in a nearby cave.

The owners of the vending machine (from a cosmic department store) soon arrive to take possession of Verda, judging her to be faulty merchandise.

When they realize she has developed human emotions, however, they recognize she may be a valuable commodity after all… 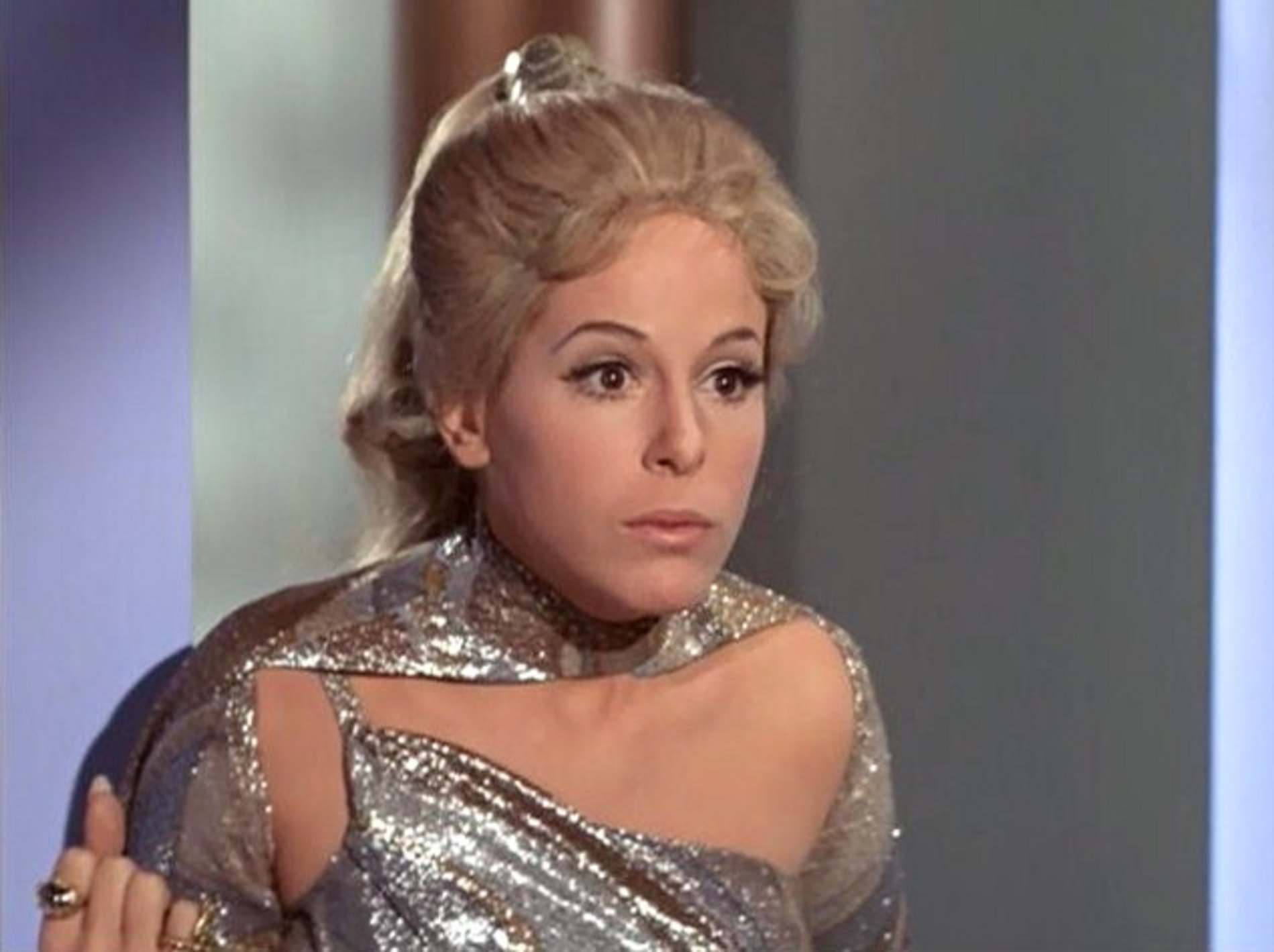 In “What are Little Girls Made Of,” Captain Kirk (William Shatner) meets gorgeous and vulnerable Andrea on Exo III, a planet once ruled by the “Old Ones:” humanoids with the capacity to make perfect androids.

There, an Earth scientist formerly believed to be dead, Roger Korby (Michael Strong), has thrived in secret, building androids…including the lovely Andrea.

At the end of the episode, Andrea reveals her love for Korby, and the scientist — now an android himself — responds by disintegrating them both with an early model phaser.  The implication is that love, if not between biological beings, is some kind of abomination.

Similarly, in the third season episode, “Requiem for Methuselah,” Kirk himself falls in love with another android female: Rayna.

Unable to resolve this problem in logic, Rayna short-circuits and dies. Kirk is so broken up by her death that Spock must remove the memory of Rayna from the good captain’s mind. 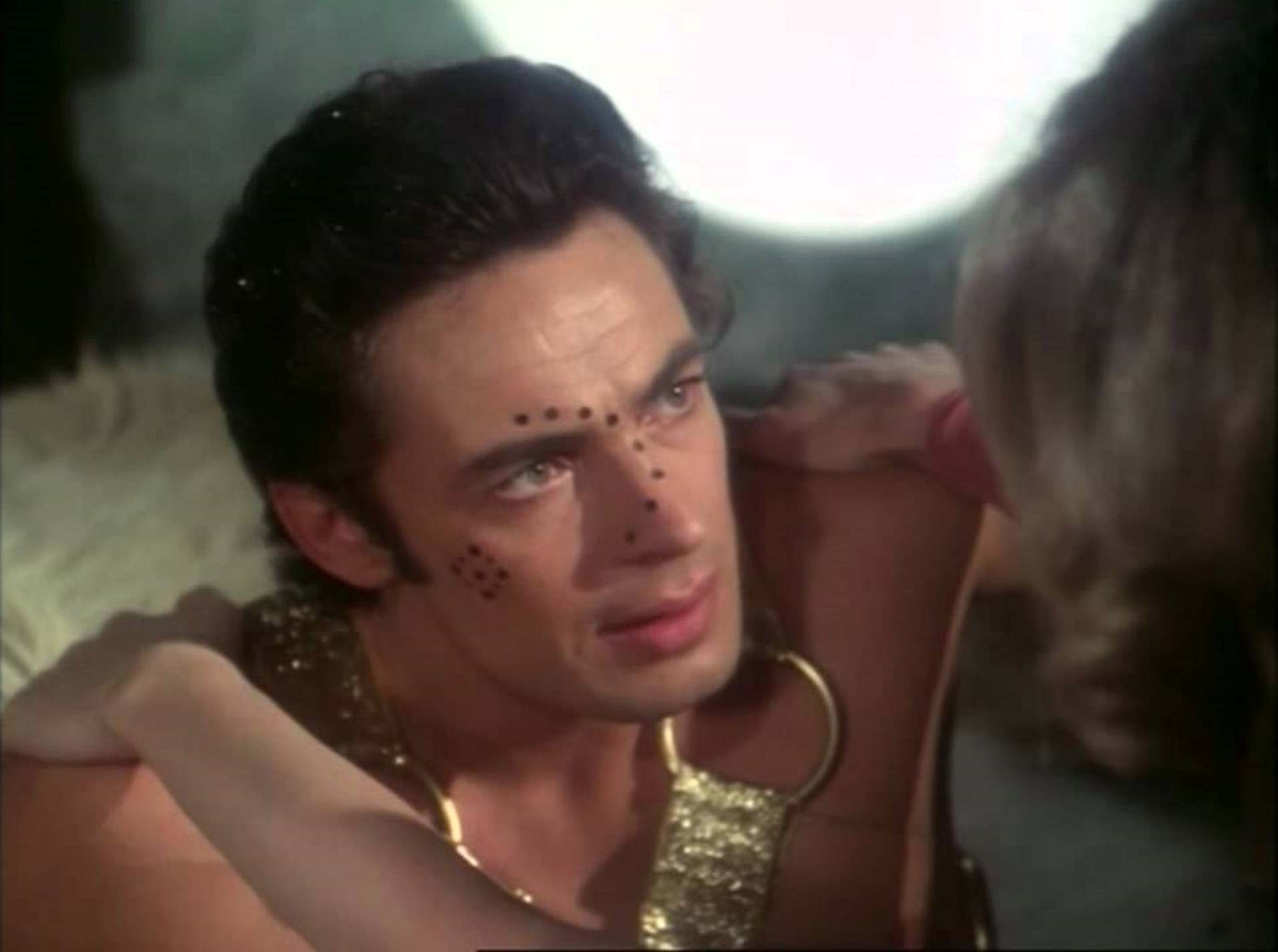 In the Space: 1999 (1975 – 1977) Year Two episode One Moment of Humanity,” the Alphans are intercepted by the androids of Vega, including Zamara (Billie Whitelaw) and Zarl.

These androids hope to learn how to commit murder from the wandering humans, and seek to make Dr. Helena Russell (Barbara Bain) and Tony Verdeschi (Tony Anholt) demonstrate violent emotions for them.

Instead, however, the sensitive Zarl falls in love with Helena after attempting to seduce her on an alien dance floor.

After kissing her passionately, he dies, taking the other androids with him since they are connected by a central computer.

But as Zarl dies, he says that oblivion was worth it for “one moment” of feeling human. 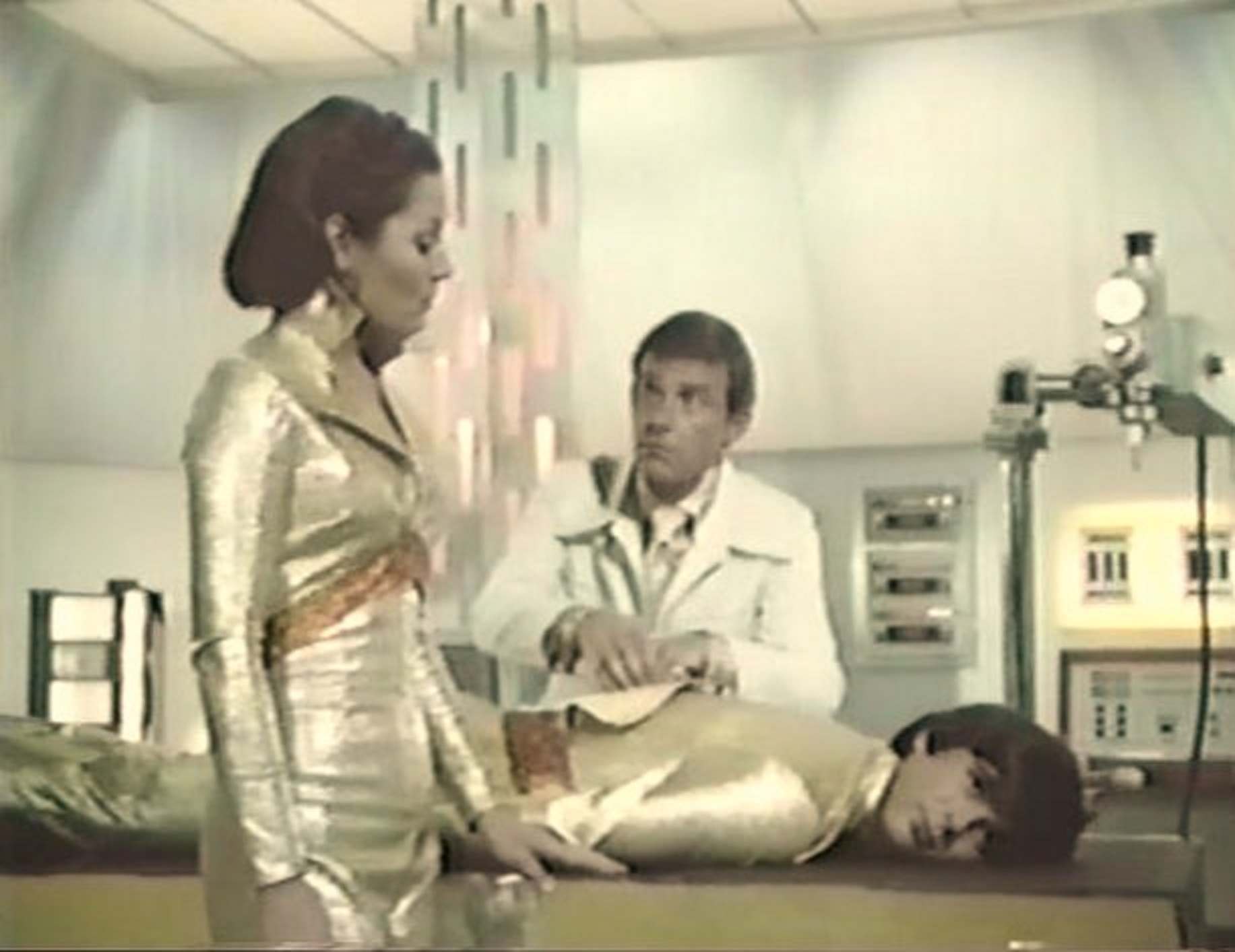 In The Fantastic Journey (1977) episode, “Beyond the Mountain,” Dr. Jonathan Willaway (Roddy McDowall) lives in a community with several androids, including Cyrus, whom he claims to consider a son.  But when Cyrus falls in love with series regular Lianna (Katie Saylor) — Willaway’s intended bride — Willaway reveals that he doesn’t consider androids equal, but slaves. He attempts to re-program Cyrus, and reports that androids are no better than chattel.

They are only “an amalgam of simulated flesh and bone,” he declares at one point. Willaway even tells his son, “your marrow is transistorized; your heart is a battery; your veins and arteries are wire filament.”

This might be another way of saying that because their skin is different than his; they are “less” than human, a widely-held belief of slave owners in America a hundred-and-fifty years ago.

Here the darkest side of the historical slavery equation is made plain when Willaway, challenged by a female android servant (Marj Dusay), warns her that if she misbehaves, he will “take her apart.”  He is not a kind father, but a punishing master.

When the enslaved androids finally rebel against him, Willaway is baffled by their revolt. “I gave you a beautiful place to live. I even made you my son…” he says, feeling betrayed, unaware that his “children” are ready to chart their own destiny. 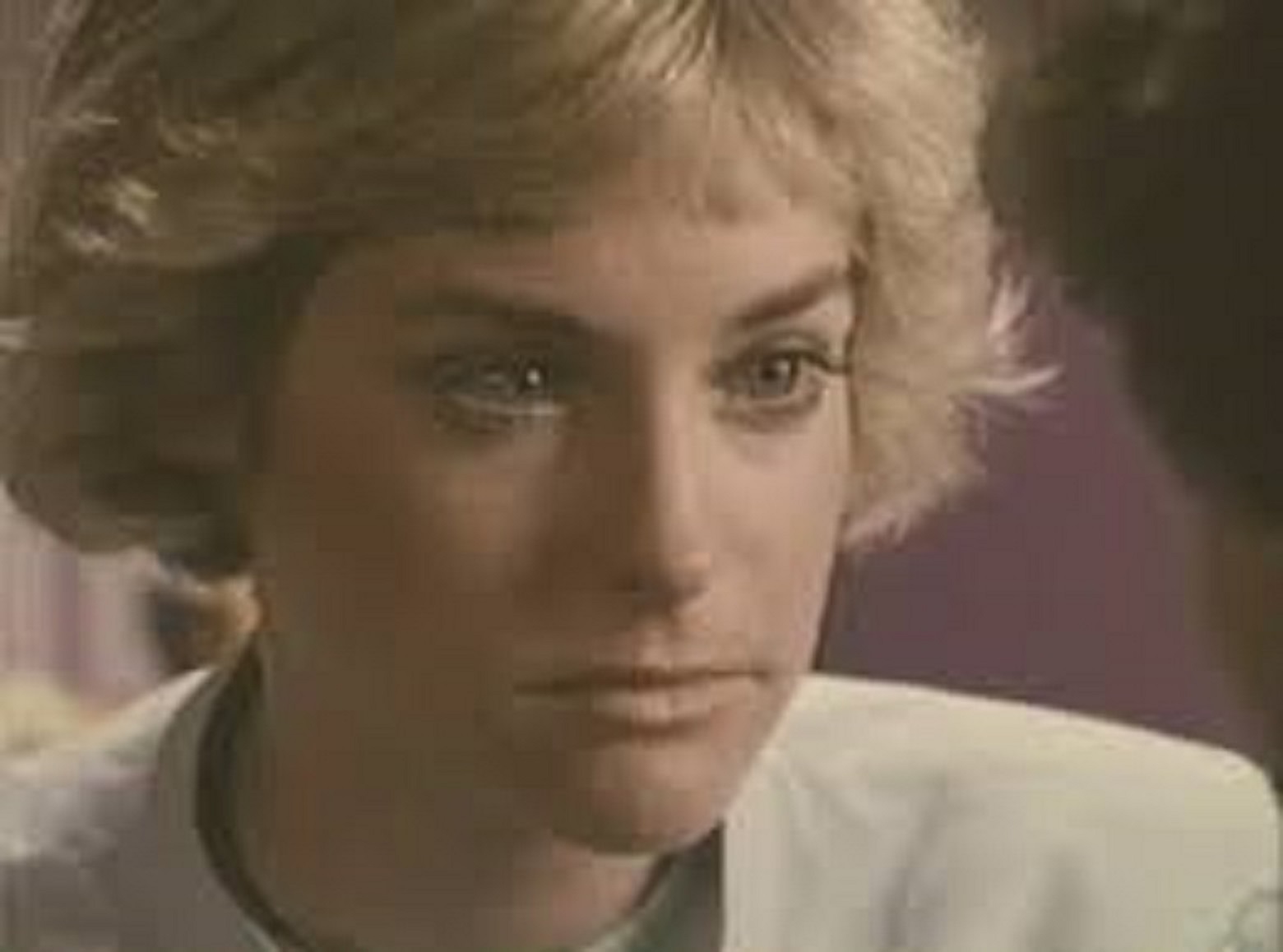 In the short-lived sci-fi series, Otherworld (1985) — which concerns an American family, the Sterlings, trapped on an Earth in another dimension — the pilot episode, “Rules of Attraction,” involves the teenage son, Trace (Tony O’Dell) falling in love with Nova, a  “plasmoid replicant,” or android, designed to work the local mines, which produces a radiation poisonous to humans.

In this case, Nova and Trace are star-crossed lovers who cannot be together, but Nova affirms that androids possess souls. Furthermore, she can show Trace the exact computer circuit in an underground complex where her soul is located.

She challenges Trace to pinpoint the location of his soul… 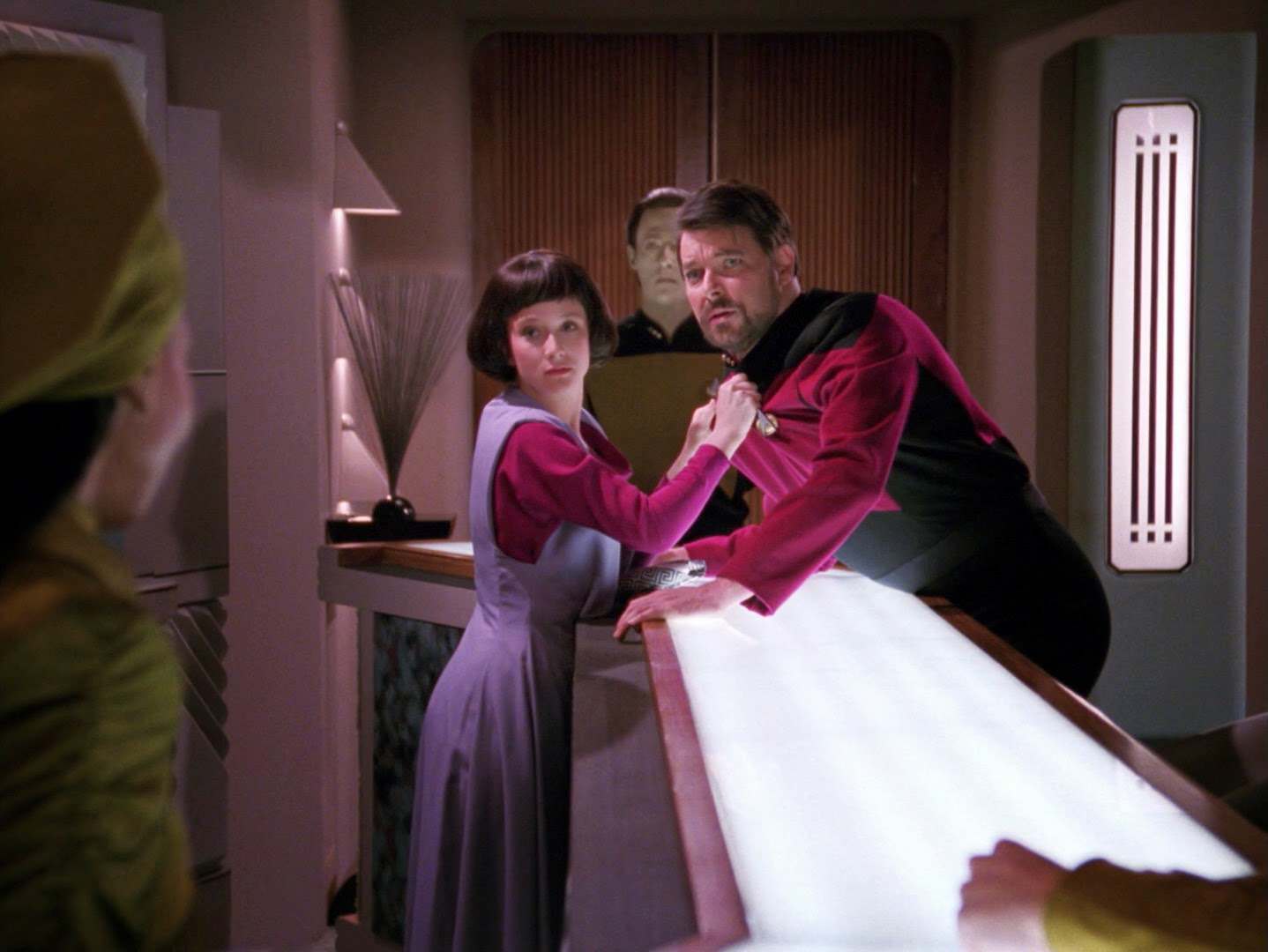 Lal takes the form of a human female, and before longs begins to demonstrate feelings of love for her father.

When a Starfleet Admiral threatens to take Lal away from Data and the Enterprise, the young android begins to malfunction, undergoing that cascade failure mentioned above.

In one of the most heart-wrenching scenes in the entire seven year series, Lal dies, but not before telling Data that by experiencing human emotions (which Data cannot…) she can love him enough for both of them.

The androids of cult-TV have been slaves, companions, lovers, and beloved children, but they have almost all come to unhappy ends because of their interaction with human beings.