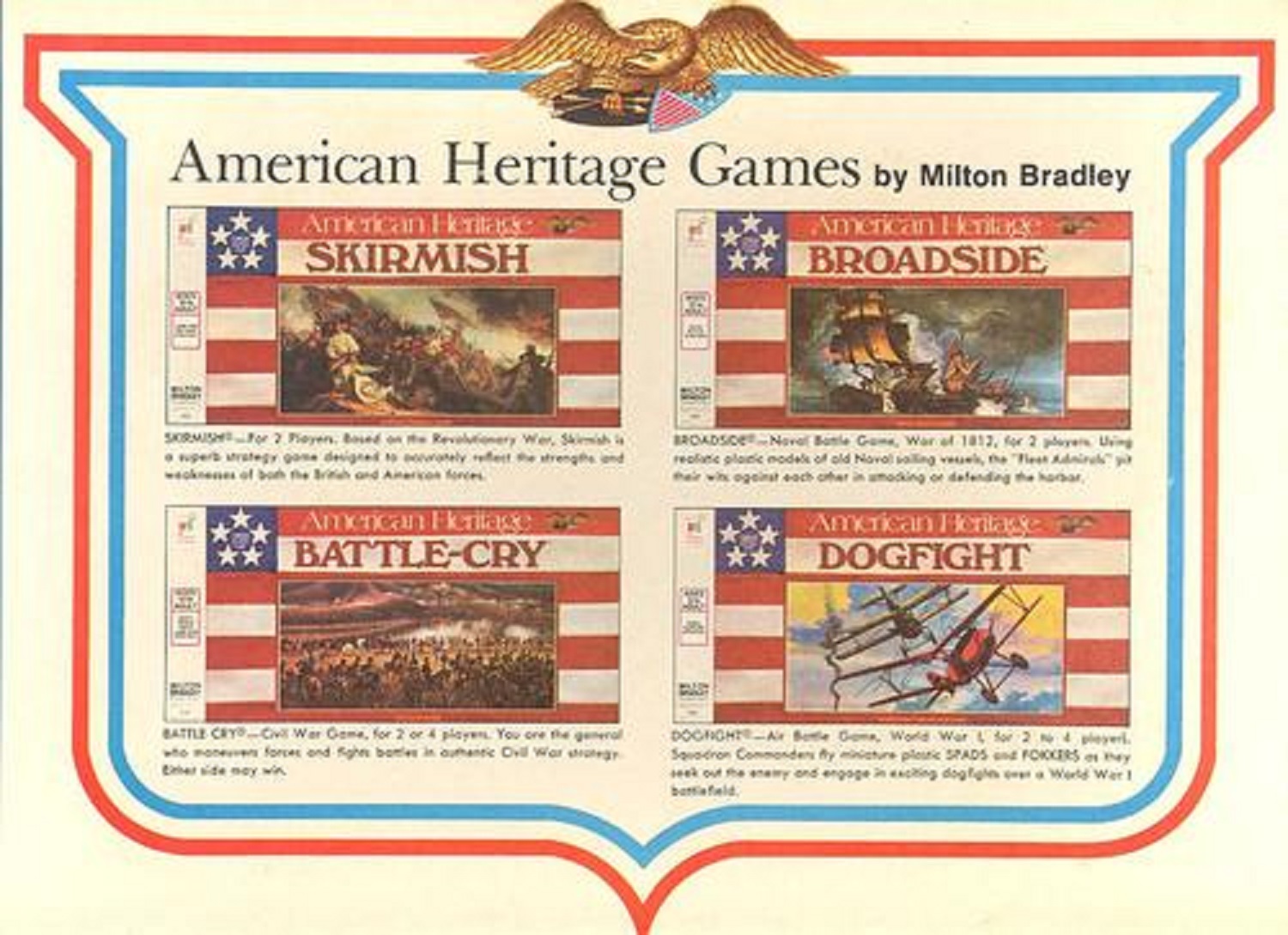 In 1961, American Heritage Magazine and toy-maker Milton Bradley teamed up to release a series of memorable “American Heritage” war games. Each of these board games recreated for young gamers a war scenario or milieu from American history.

There were five games in all. 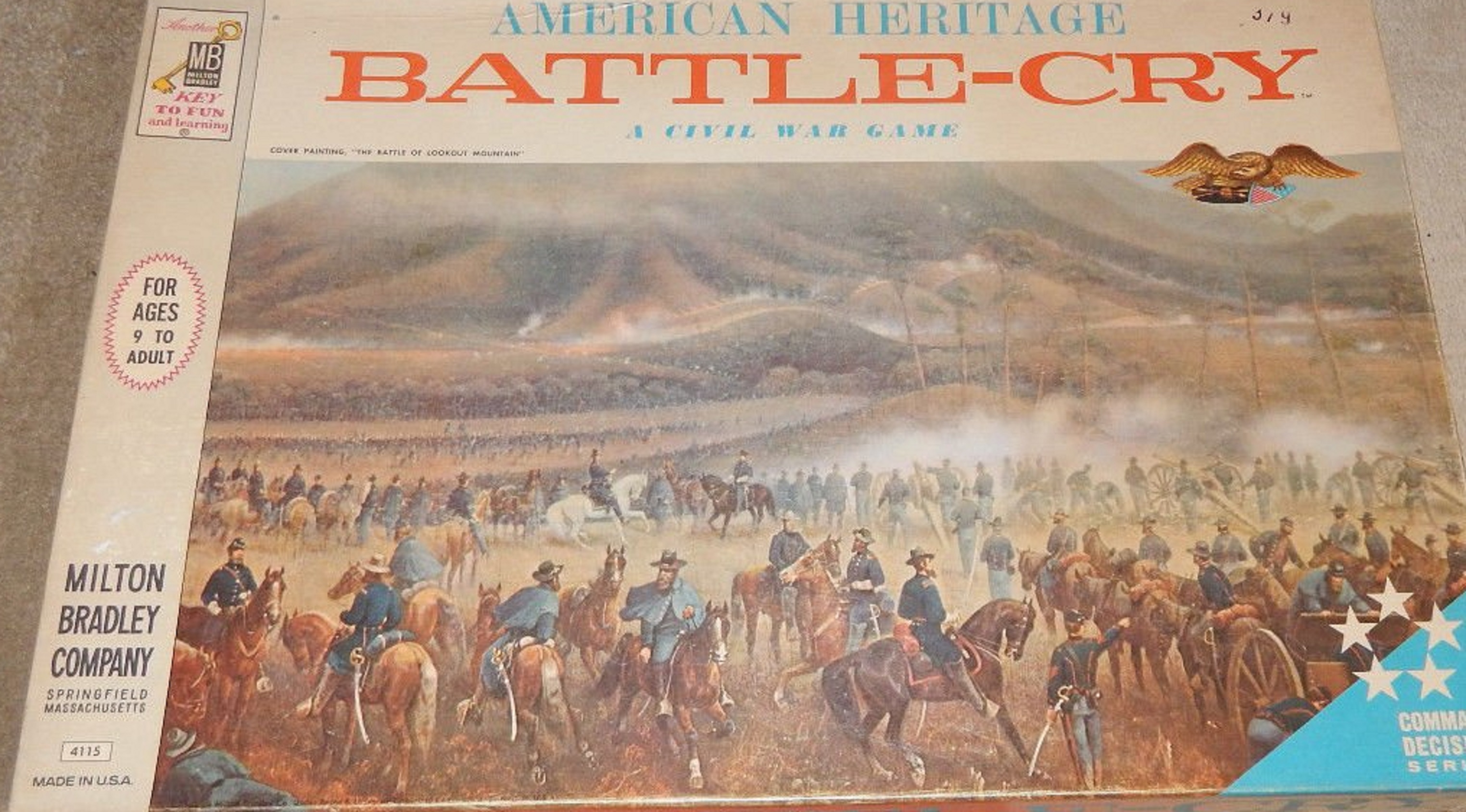 In 1961, Milton Bradley premiered the American Heritage Game of the Civil War (also known as Battle-Cry). This game was set in the 1860s, and pitted the Blue (North) against the Grey (South), using cavalry, infantry, and artillery. In some cases, rails could be used to advance troops to their destination.  For two to four players.

In 1962, two games were released under the American Heritage banner (and they happen to be my favorites of the bunch.) 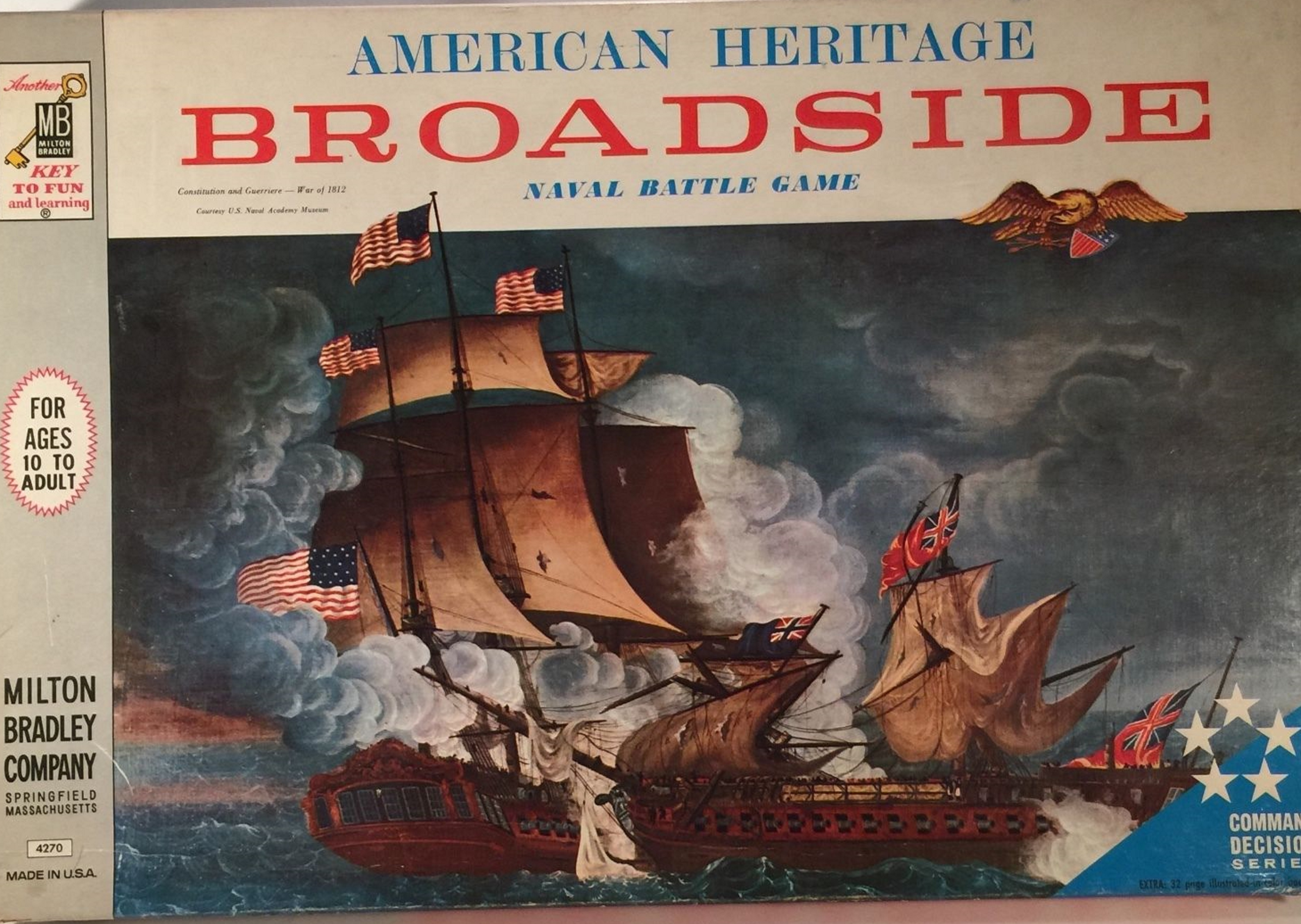 First, there was Broadside, a sea-bound “Command Decision’ game featuring miniatures of ships (and their sails, which had to be inserted manually).  Basically, the goal was to cannonball the enemy ships, and destroy your opponent’s fleet. You could play as the red fleet, or the blue fleet. 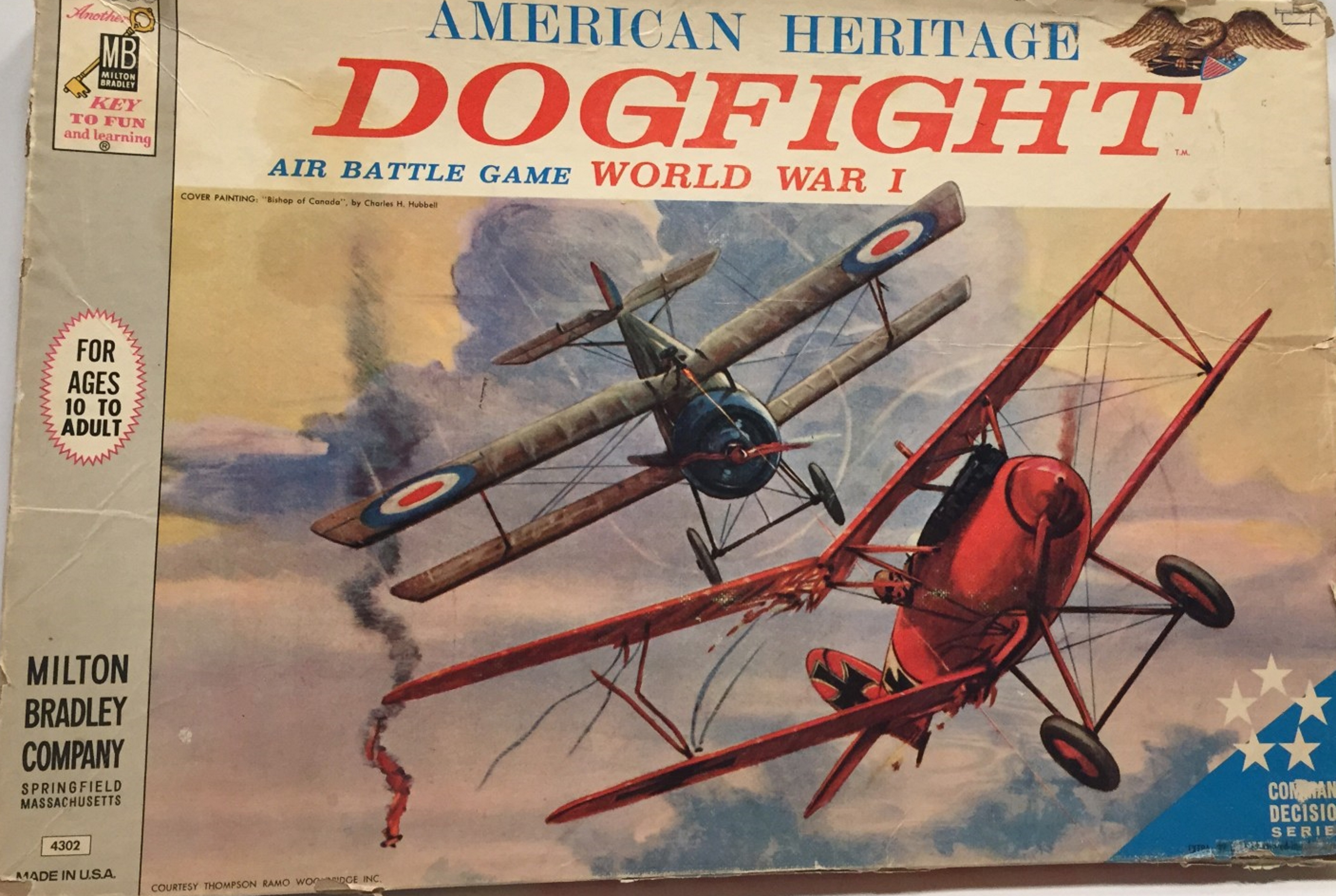 Even better, however, was Dogfight, a game set during World War I, the age of the Red Baron. In this case, you could play as either the Americans or the Germans, and had a squadron of three bi-planes with which to battle the enemy.  Once in the air, you could perform manoeuvres, including a loop or barrel roll, and the ultimate goal was to strafe your enemy’s landing field, preventing future take-offs. 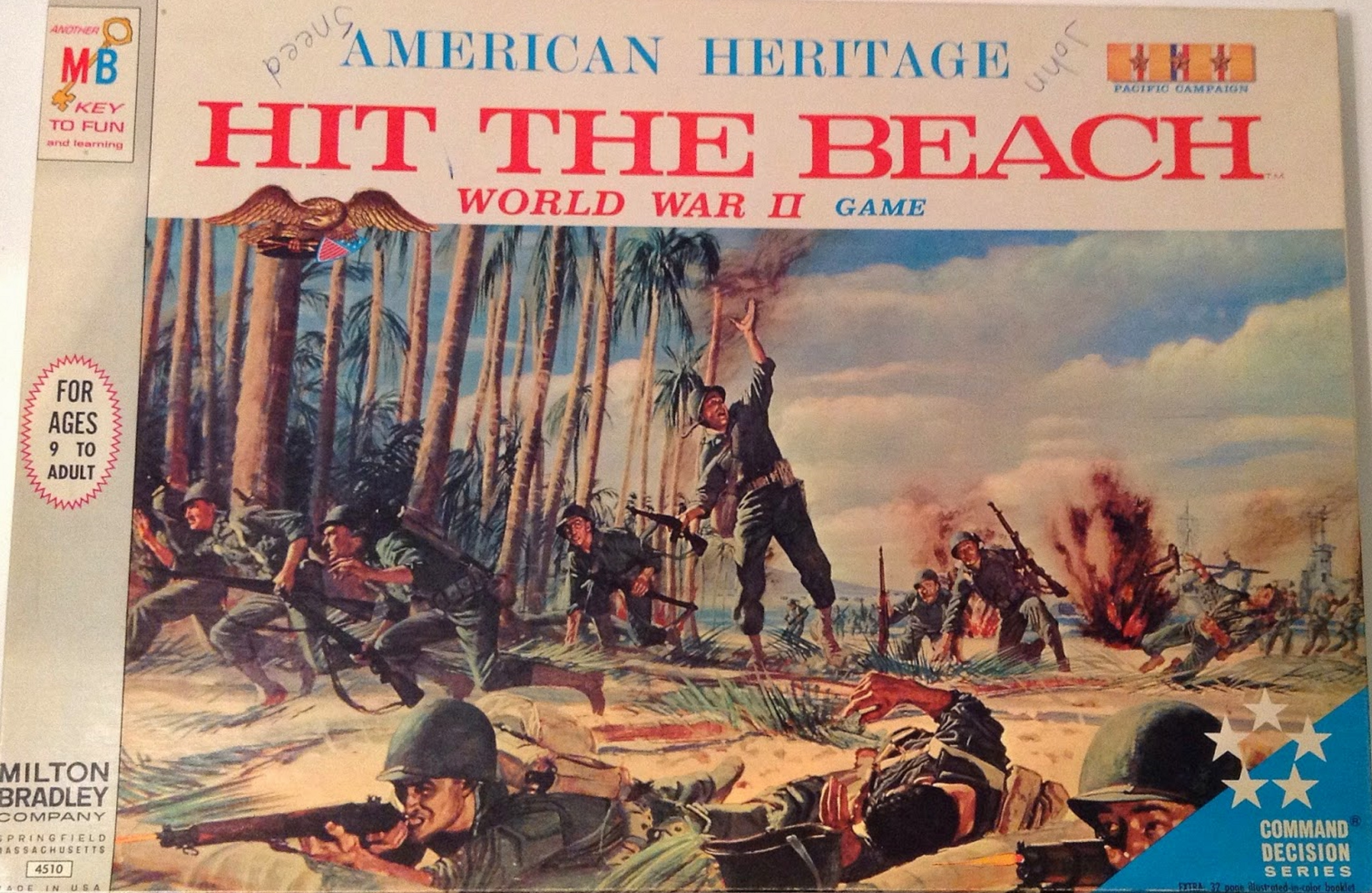 In 1965, Milton Bradley debuted Hit the Beach, which was set during World War II, and in the War in the Pacific. In this case, American forces — marines, infantry, air and naval support — had to defeat Japanese defense force on a Pacific island.

Finally in 1975 — a full decade later (when the games were still popular) — Milton Bradley produced “Skirmish,” a game set during the American War of Independence, and pitting the Continental Army against the Red Coats.

I have played all of these board games in my life, typically in “combat” against my Dad. I’ve introduced my son to Broadside and Dogfight at this point, which are the only Heritage Games my family still owns, after all these years.