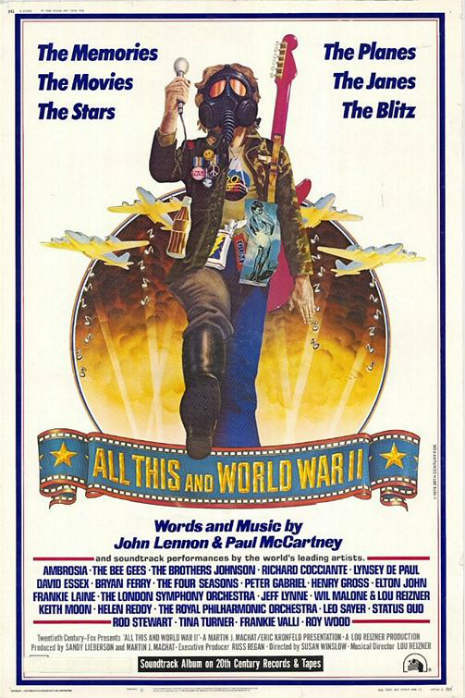 FANS of The Beatles hated All This And World War ll, a film that mashed up actual 1940s World War 2 footage with Hollywood actors pretending to fight in war films and set it to people singing songs by the Fab Four. This 1976 flick was not the work not of a Japanese fan in his mum’s basement but the mighty 20th Century Fox.

So, which song and signer went with what footage? You might enjoy the bit where the German charge into Poland as Ambrosia sings “Roll up for the mystery tour”.  Peter Gabriel’s belt out “Strawberry Fields Forever” – “living is easy with eyes closed” – as Neville Chamberlain shows off his worthless peace treaty.  Tina Turner covers  “Come Together” –  “choo choo eyeballs” – is the Japanese march up and down. Gawd, those Beatles were significant.

But how did his chimera come about? One claim is that it was was based on a dream by Russ Regan, the film’s executive producer. He explained:

“The movie is self-explanatory. The music that was used for the different segments explains what the dream was. For example, the Japanese planes taking off for Pearl Harbor and the Bee Gees singing ‘Here Comes the Sun.’ The rest is all basically self-explanatory. Seeing that I was a kid during World War II and I saw all these newsreels and stuff, you know, it seemed like the music sort of fit a lot of the segments of that war, so that’s why I did it. And I dreamt it, actually wrote it all down. I woke up in the middle of the night, wrote these different things down, and we made a sort of a documentary movie about World War II with the Beatles’ music, so that’s what it is, my friend.”

That playlist in full: