Back before there were 24 hour kids networks, children cherished Saturday mornings as that brief moment when the Boob Tube was actually playing something for them. Soon it would be back to Kojak and Maude, but for a few hours every Saturday, the kids ruled the living room.

There were so many great shows in the 1970s, where does one begin? Let’s start by exploring five examples. So, put on your Star Wars footie pajamas, grab a bowl of Frankenberry, and let’s dive in!

1. Valley of the Dinosaurs 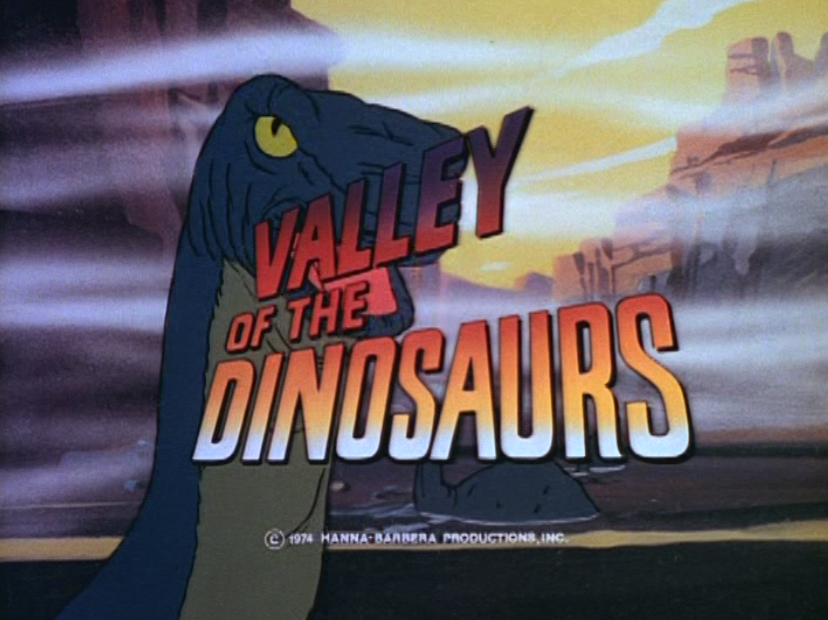 What 1970s kid didn’t love Valley of the Dinosaurs? As a kid, I didn’t pick up its striking similarity to Land of the Lost. In many ways the shows were identical. Here’s just a few similarities:

1. Both families (the Butlers in VOTD and the Marshalls in LOTL) were river rafting when they were mysteriously transported to another time/space

2. Both families consisted of a straight laced dad and his two kids – a boy and a girl. The only difference was VOTD also had the mother with them (who was voiced by the same lady who did Wonder Woman on Superfriends).

3. Both families encounter a primitive tribe and ally themselves with them; the youngster of the primitive tribe (Tan in VOTD and Chaka in LOTL) then becomes very close to the family, a good friend to the children.

Initially, I was inclined to think VOTD was a cheap knock off of the brilliant LOTL, but these two shows actually both premiered on the same day in 1974! 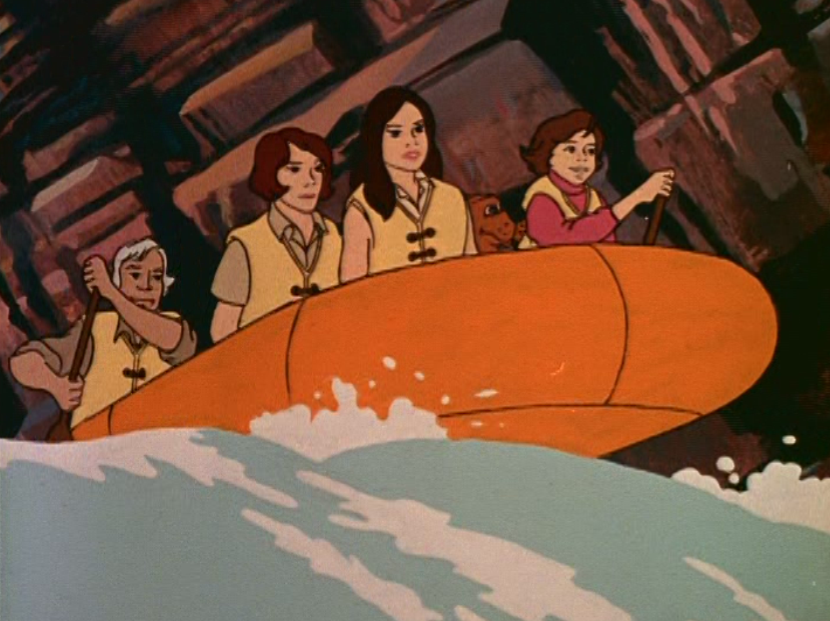 I found it interesting to learn that Greg Butler (the boy in the red shirt above) was voiced by Jackie Earle Haley. He was a popular child actor in the 70s (The Bad News Bears) and was friends with Johnny Depp who went with him for an audition for Nightmare on Elm Street – the passed on Haley and chose his buddy Depp instead. In a strange twist of fate, Haley will be played Freddie Krueger in the 2010 Nightmare on Elm Street. 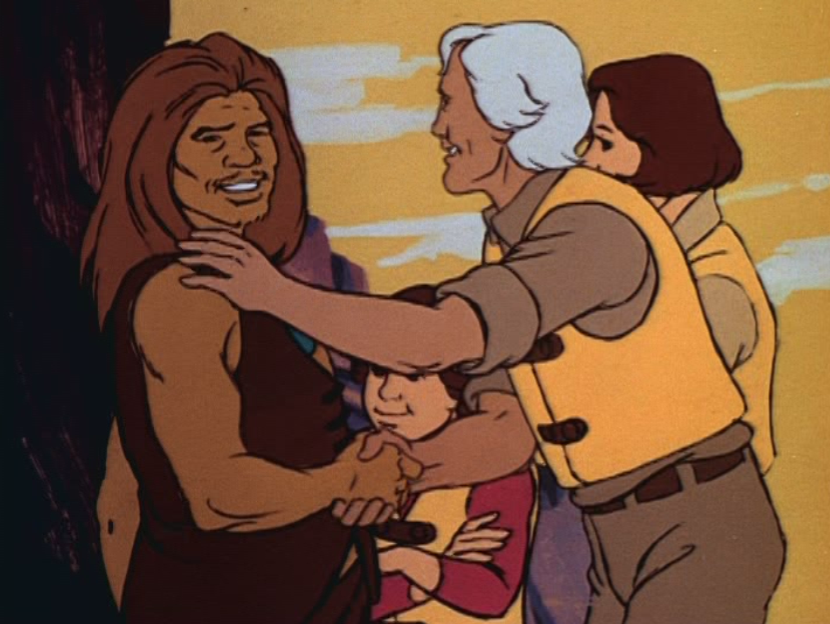 One thing that bothered the shit out of me was that the cavemen spoke perfect English. At least on LOTL, the Pakuni spoke their own dialect – these cavemen speak every bit as fluently as the Butler family! No comprende.

One of the cavemen, Lok, was voiced by Frank Welker (Fred from Scooby Doo), one of the most prolific voice actors in Saturday morning history. Evidently, he was sort of a love interest for the daughter, Katie. No on screen sex, but lots of implied heat. 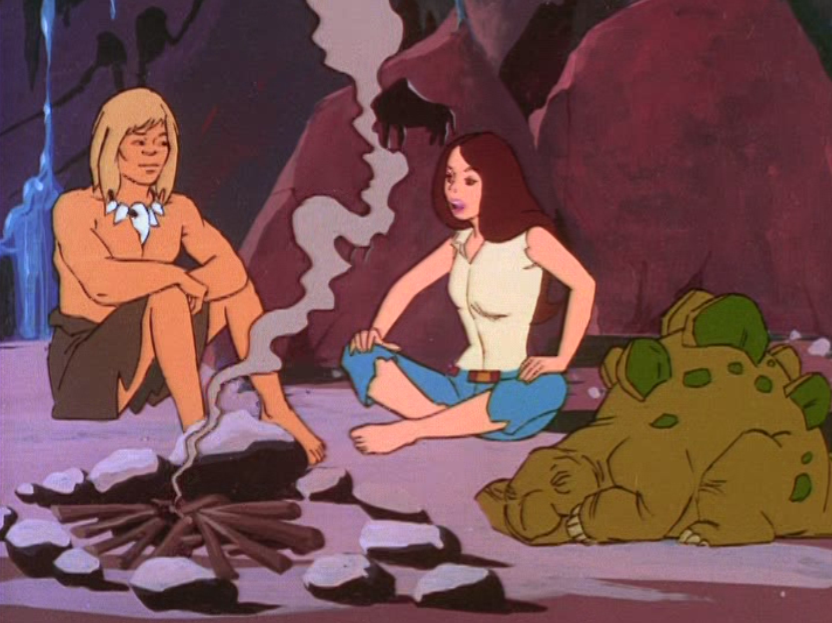 Katie, by the way, was voiced by Kathy Gori – the same lady who voiced Rosemary the telephone operator on Hong Kong Phooey.

Every single Hanna Barbera cartoon in the 70s always featured some sort of pet to provide comic relief. Perhaps, Scooby Doo is to blame, I don’t know. But VOTD was no exception. There was a comical and “cute” stegosaurus and a dog named Digger…. who looks remarkably like Scoob, even his collar is the same color. 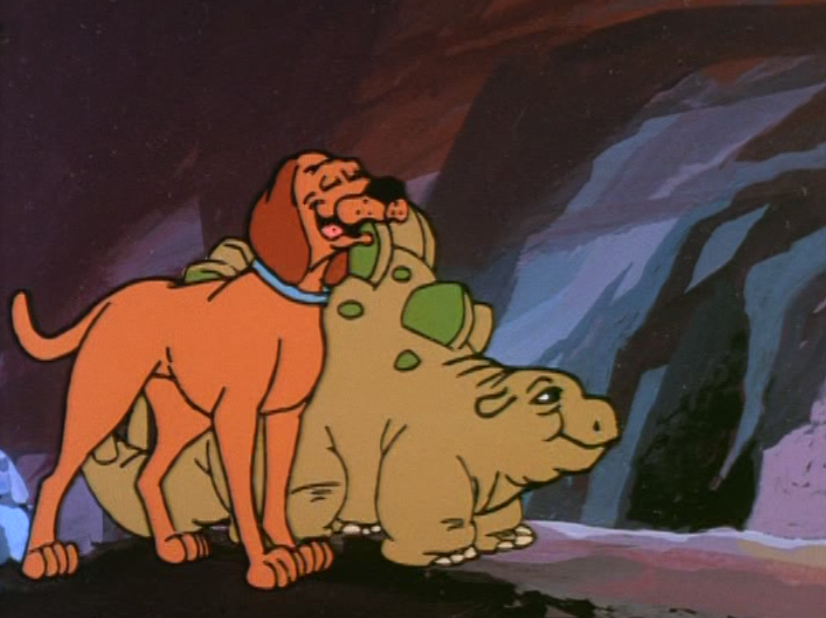 All in all, it’s not a bad show. The stories are not anywhere near as complex and interesting as LOTL, but I would still easily recommend it for both the young and the young at heart.

2. The Amazing Chan and the Chan Clan 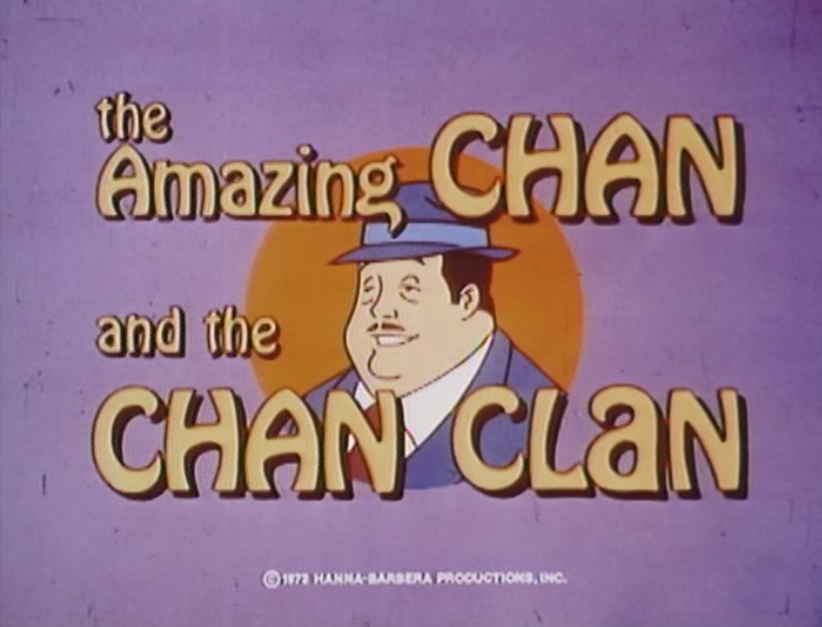 With the success of Scooby-Doo, the formula of mystery solving teens with comedic pet was repeated endlessly on Saturday mornings (see a previous article: Those Meddling Scooby Doo Kids: Saturday Morning Mimicry!). With the further success of The Archies and their number one hit “Sugar, Sugar”, the formula of the teen pop band was also recycled ad nauseum in Hanna Barbera Saturday morning offerings.

The Amazing Chan and the Chan Clan combined both elements: The Chan kids solved mysteries with the help of their loveable dog (voiced by the same guy that voiced Scooby Doo!) and were in a pop group with music sung by Ron Dante (the guy that sang The Archies songs!) and supervised by Don Kirshner (the guy that supervised The Archies… and The Monkees!). 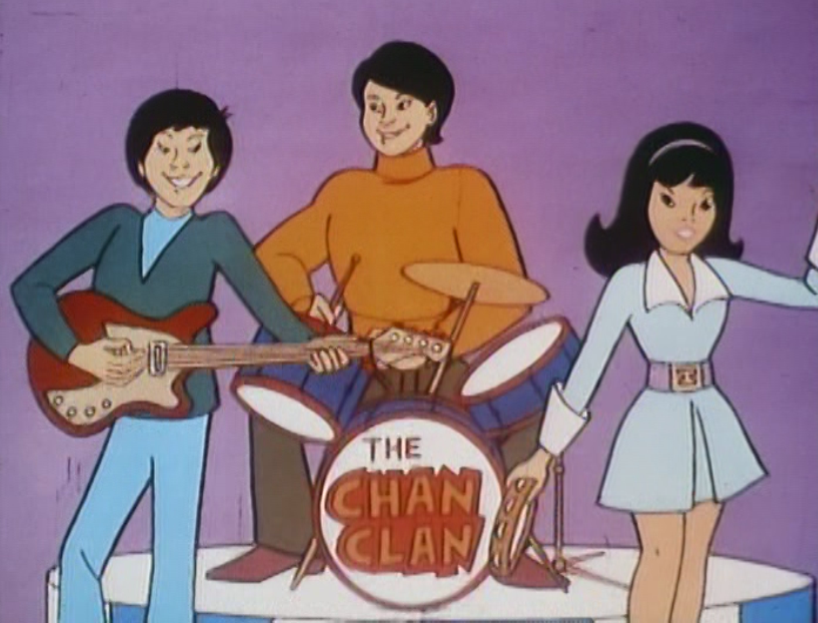 When the show was initially dubbed, it was determined that the Chinese accents were too thick and us 70s kids would be confused. Subsequently, all the original Chinese voice actors were ditched, and were replaced by more Anglo voices…. including Jodie Foster as Anne Chan!

That’s Anne Chan below in the baseball cap. She’s a tomboy. Her sister, Suzie Chan is the hot one. Sort of a Velma – Daphne thing going on. 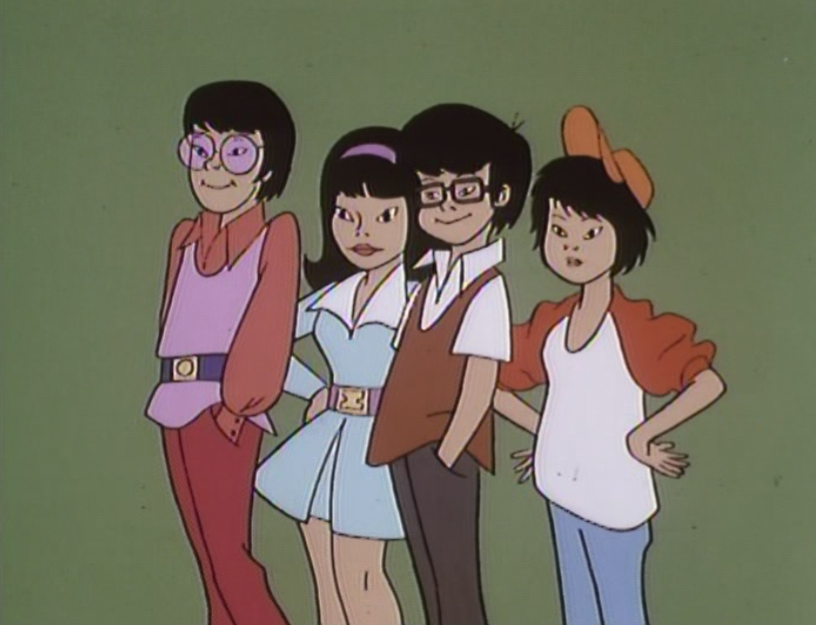 Stanley Chan is the guy in the greenish shirt on the left (in the image below) who always said the catch phrase that never caught on, “Wam Bam, We’re in a Jam!”. He was voiced by Lenny Weinrib – the same guy that played H. R. Puffinstuf and did the voice of that miserable piece of shit, Scrappy Doo. 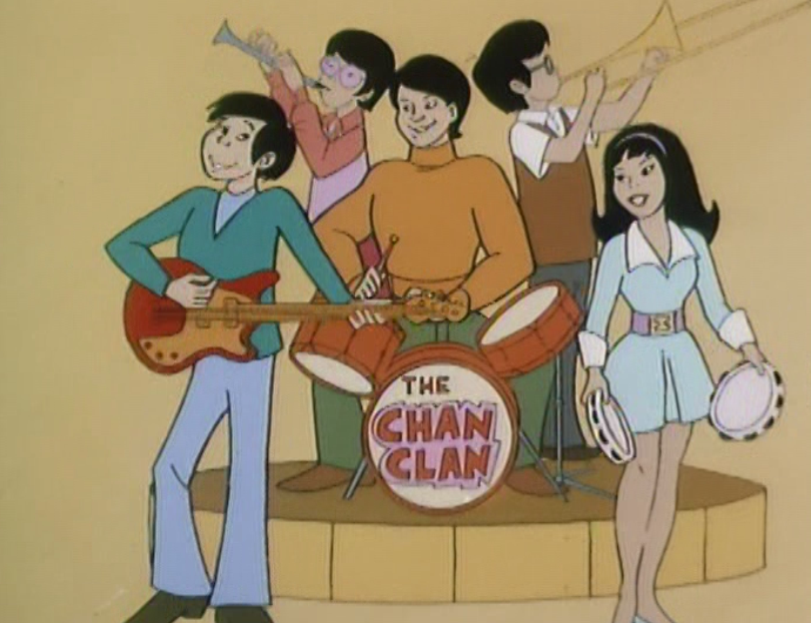 Check out the awesome intro: 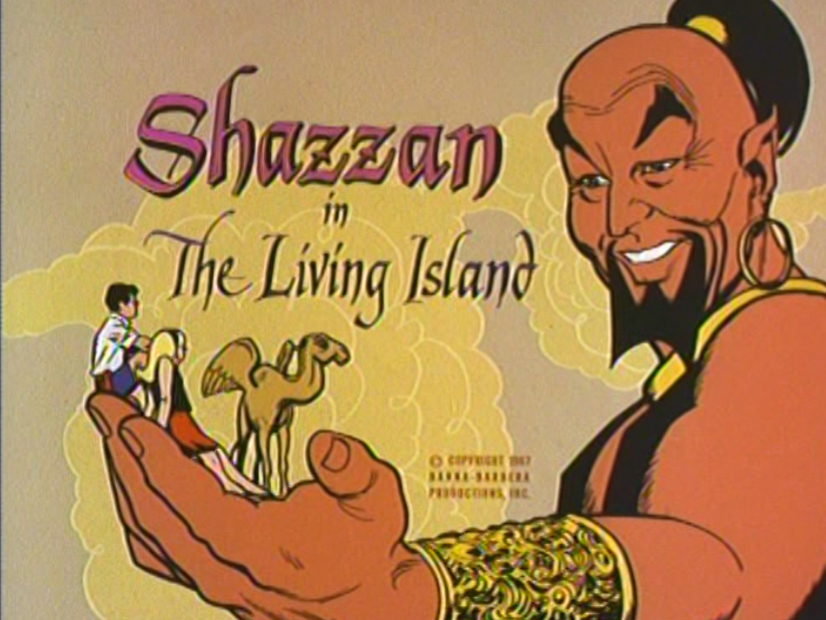 I think Shazzan, repeated the same storyline more than any other show in history. Saturday after Saturday, it never swayed from the format: (1) Chuck and Nancy get into trouble, so they call on their genie for help, (2) Shazzan busts some ass and saves the kids, (3) the kids get into even worse trouble and have to call on Shazzan again, (4) Shazzan opens an even bigger can of whoop ass, saving the kids once more. The End.

Scooby Doo was repetitive, but this was extreme…. and yet, 70s kids didn’t really need much variety sitting in front of the TV in their PJ’s, sporting a bad case of bed head, and munching on Count Chocula. It was repetitive, and we liked it that way. 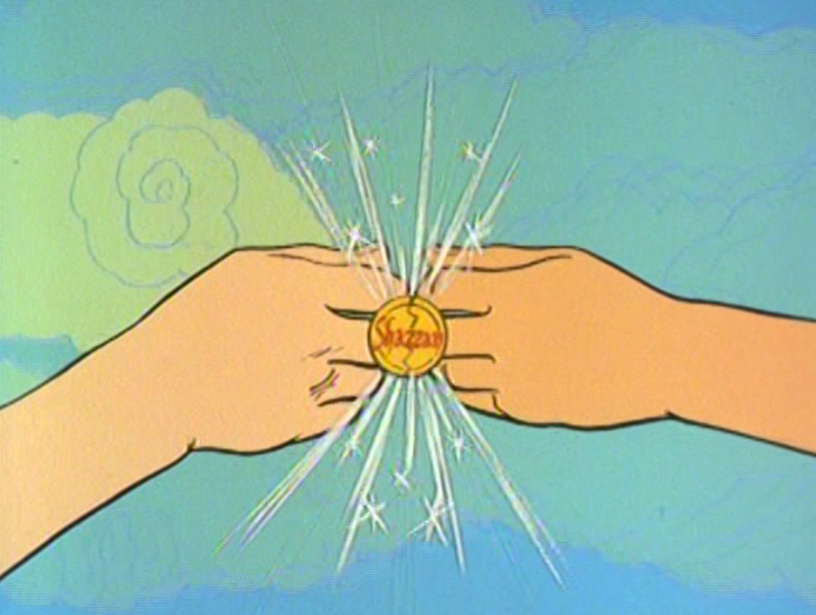 Recycled story elements wasn’t the shows biggest problem. The biggest liability was Shazzan’s godlike powers. He literally had total control of time and space, could create and destroy matter at will, and make any villain his bitch within seconds. He had no vulnerability whatsoever – no kryptonite type plot device to stifle his awesome powers and make things interesting.

In fact, when the kids put their rings together and called on him, Shazzan would only be in the picture for 30 seconds – that’s all it would take to subdue any foe, no matter how numerous or deadly. In fact, Shazzan always laughed and told lame jokes while he humiliated and degraded his victims.

You may remember Robert Smigel did a rather disturbing spoof of Shazzan for Saturday Night Live featuring a Shazzan who didn’t just defeat the villains; he dismembered them and fed them their own cooked body limbs, all with that happy Shazzan attitude. Then later, he started bawling over Daddy issues. 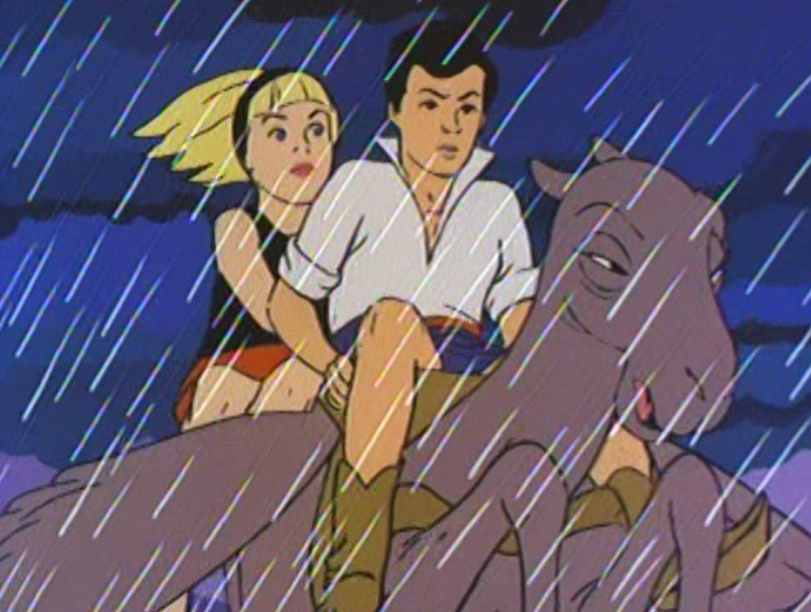 But who can forget Kaboobie? He was Chuck and Nancy’s flying camel who sounded EXACTLY like Scooby Doo. He was voiced by Don Messick, who I guess was so happy with Kaboobie’s voice, he used the exact same sounds for that mystery solving Great Dane.

Nancy was voiced by Janet Waldo, who also was the voice of Judy Jetson, and wife of the guy who wrote the play Inherit the Wind.

And, finally, I would be remiss if I didn’t mention that Shazzan was created by Alex Toth, the mastermind behind Space Ghost and a host of other well known cartoons. Toth was also a prolific comic book artist, often ranked up there with Will Eisner and Jack Kirby. 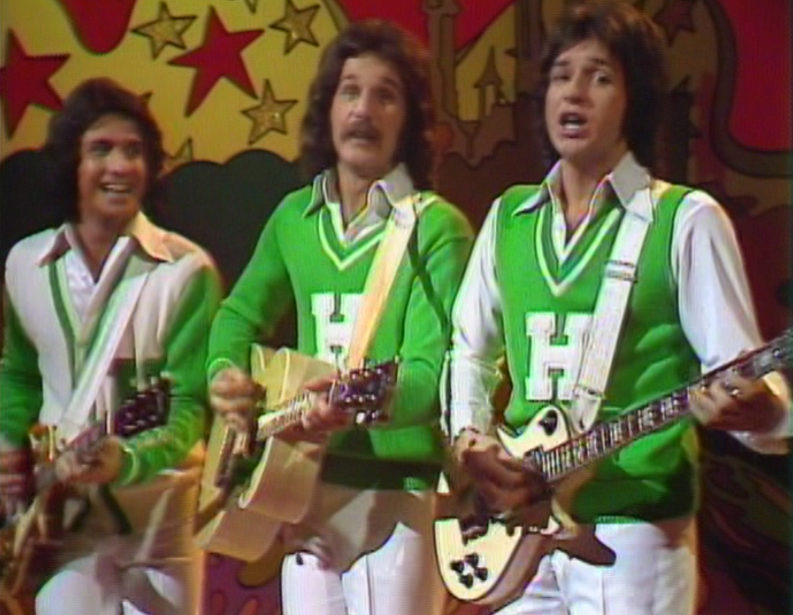 The Hudson Brothers Razzle Dazzle Show was a fairly awful non-animated Saturday morning program that aired from 1974 to 75. It had a lot of similarities to Krofft productions in that it was both surreal and cheesy.  The brothers were actually decent musicians and had achieved a degree of chart success in the late sixties and early seventies. But their real claim to fame is brother Bill (on the left in the image below), who was one of the biggest playboys of his day. 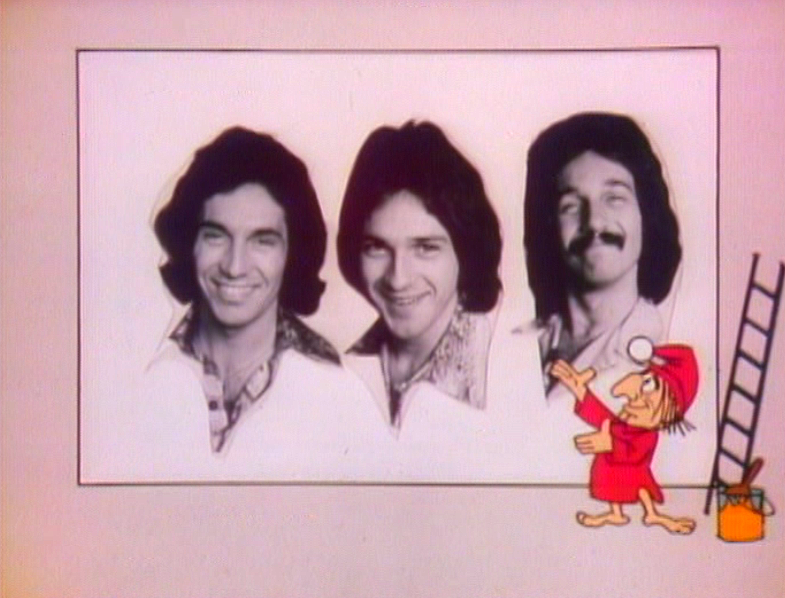 He married Goldie Hawn (his daughter is Kate Hudson), and then Cindy Williams from Laverne & Shirley. He also was romantically involved with Jill St. John, Candice Bergen, and Ali McGraw!

Their show is great to watch for the outrageous fashions, psychedelic sets, and groovy music; however, it gets old real fast. This is primarily due to the fact that every single episode was composed of the exact same skits with little to no variation!

For example, in one episode a group of Frankenstein’s monsters are gathering around their new creation. When they unveil their creature, it turns out to be a fireman! (insert canned laughter) 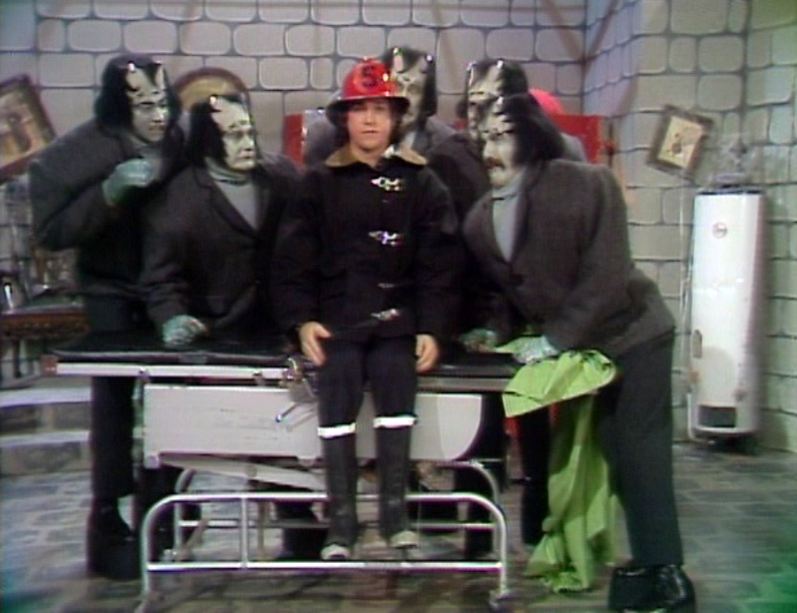 In the next episode, the exact same thing happens except this time it’s a nurse! (insert canned laughter) My God, it’s like the writers sat down and wrote the entire season’s gags over lunch. 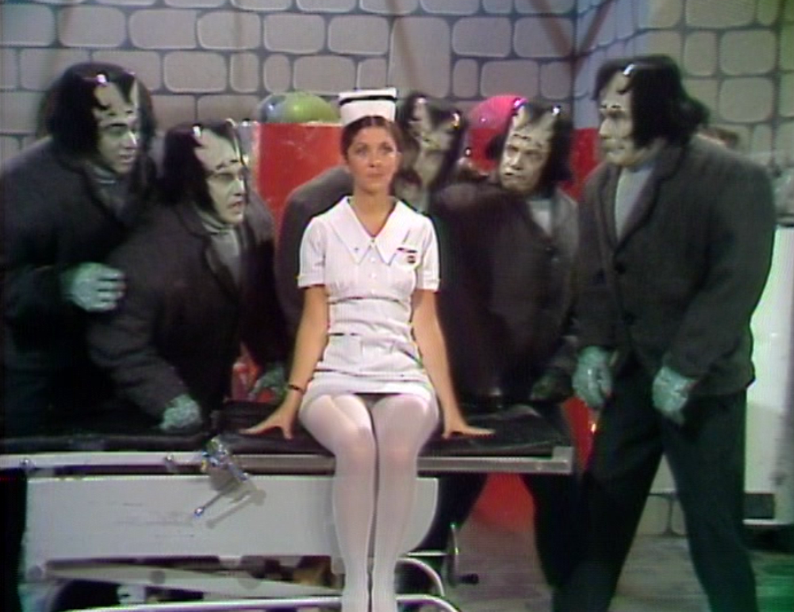 From time to time, you can catch glimpses of Murray Langston, otherwise known as The Unknown Comic. You remember him – the comedian who performed with a bag over his head on The Gong Show. Murray can be seen in the image below – he’s in the back, far left wearing a light green shirt. 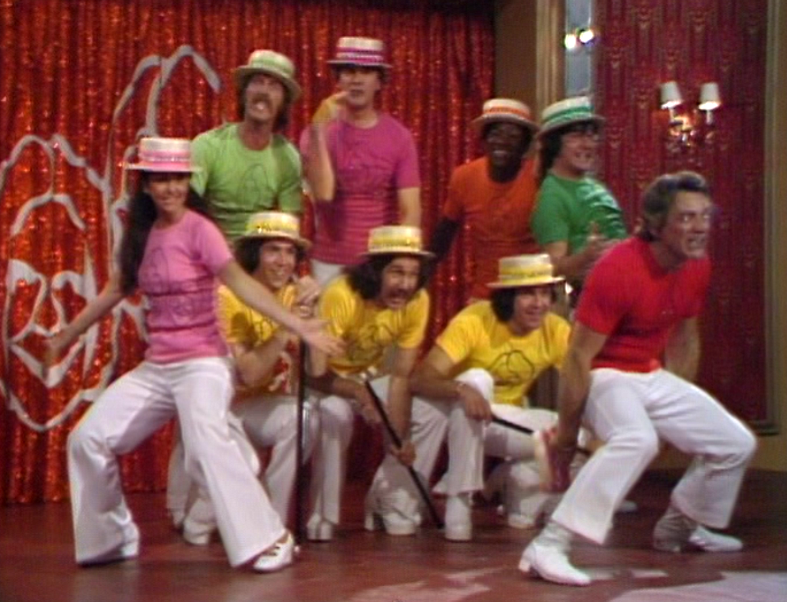 And finally, one last complaint about the show…. the laugh track. Sweet Lord, the canned laughter is so obnoxious it will blow your mind. Even the most low key gag, barely deserving of a chuckle is given a shrill, tinny laugh track that sounds like a crowd of millions laughing maniacally. It is so startling, I reflexively jumped back when I first heard it. 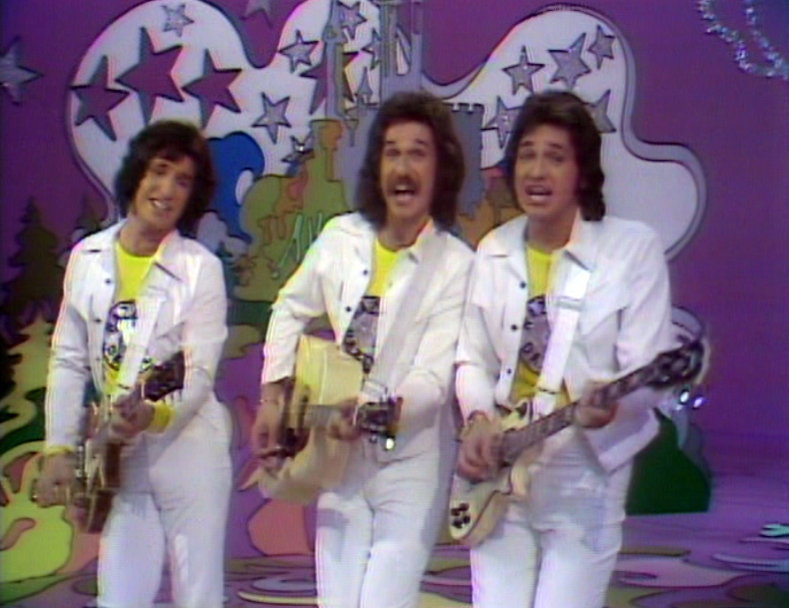 The supporting cast was lifted from the Sonny and Cher Comedy Hour, including Rod Hull and his Emu (below)–a huge star in other parts of the world.  The Hudson Bros. were not–as was pretentiously declared at the time–the second coming of the Beatles (or even the Monkees) but they were personable and for a Saturday morning audience, it was fun. 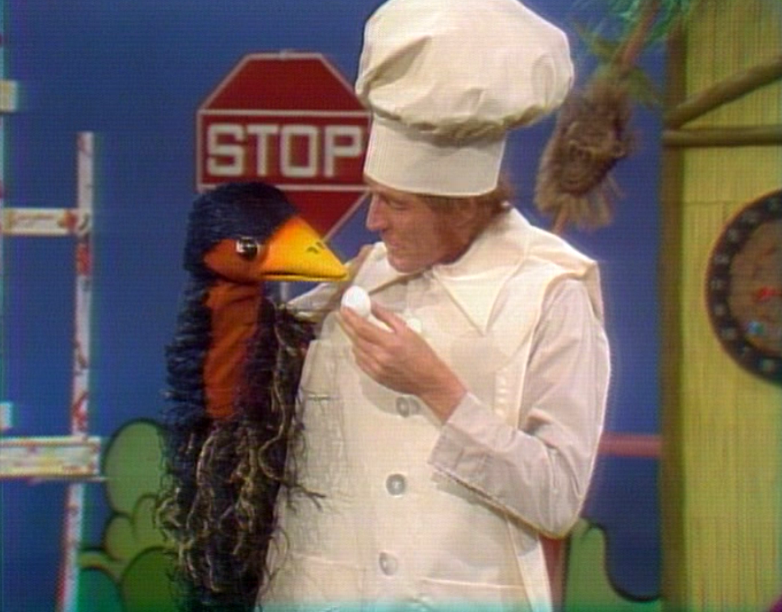 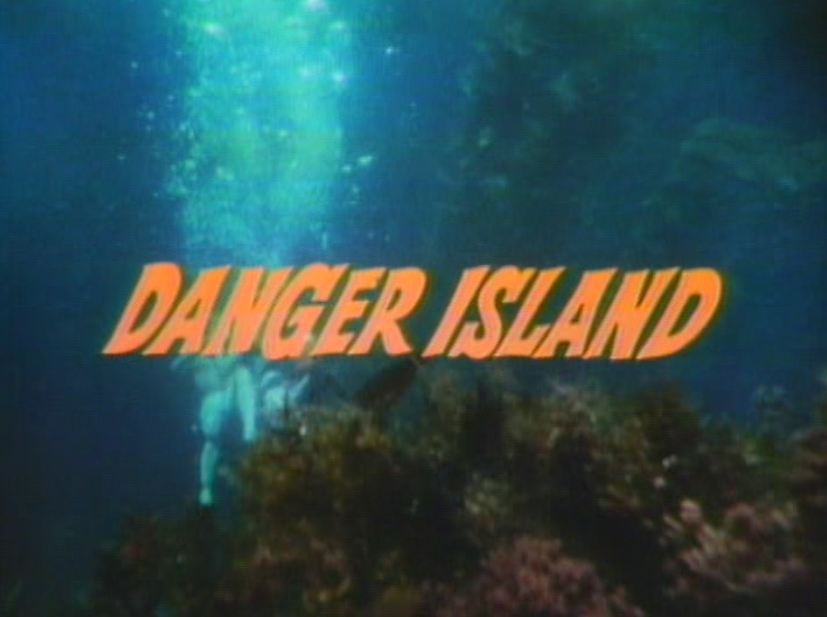 Long before Richard Donner directed The Omen and Superman, he directed Danger Island, a 10 minute serial that appeared on The Banana Splits. It basically was like Johnny Quest but live action. There was also one other difference – it scared the living shit out of me as a kid.

You see, some of the scenes got to be quite gritty and realistic. When pirates came aboard the ship, you wondered what horrible things these ugly bastards would do to the trio of explorers. There were scenes featuring realsitic dead bodies, and scenes with half-naked cannibalistic natives (called The Skeleton Men) torturing and trying to eat the explorers. It always seemed so out of place on The Banana Splits sandwiched between The Three Musketeers and The Arabian Knights cartoons. 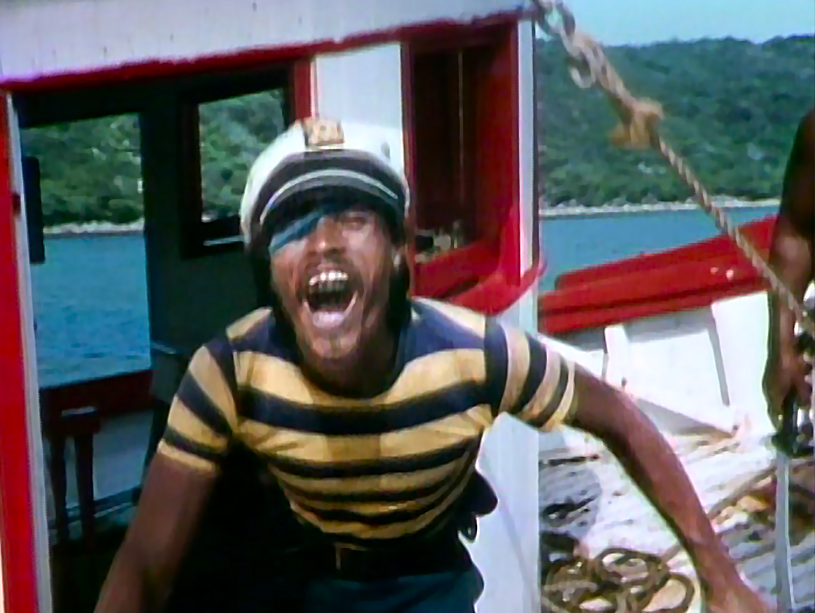 The explorers consisted of a scientist who reminds me of Dr. Benton C. Quest, a young stud “Link” played by Jan Michael Vincent, and the stone cold fox, “Leslie” (played by the daughter of the guy who wrote “(Get Your Kicks On) Route 66”. They basically travelled around looking for archaeological treasure and running into adventure. 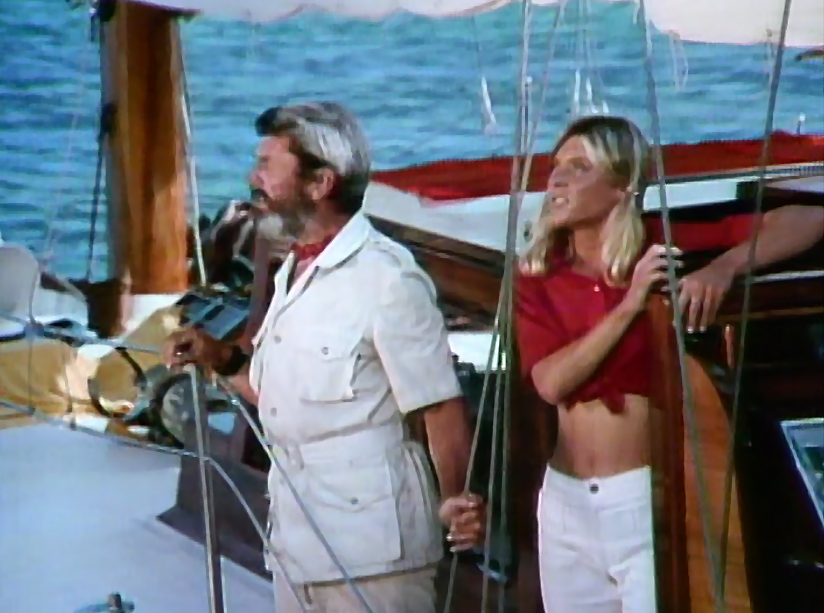 That adventure usually consisted of being captured and tortured by vile looking villains, I didn’t know what “rape” was back in my preschool days, but there was definitely an air of horrible violence when Leslie was captured by various baddies – they’d kiss her hand, throw her around, etc….. I was a sensitive child. 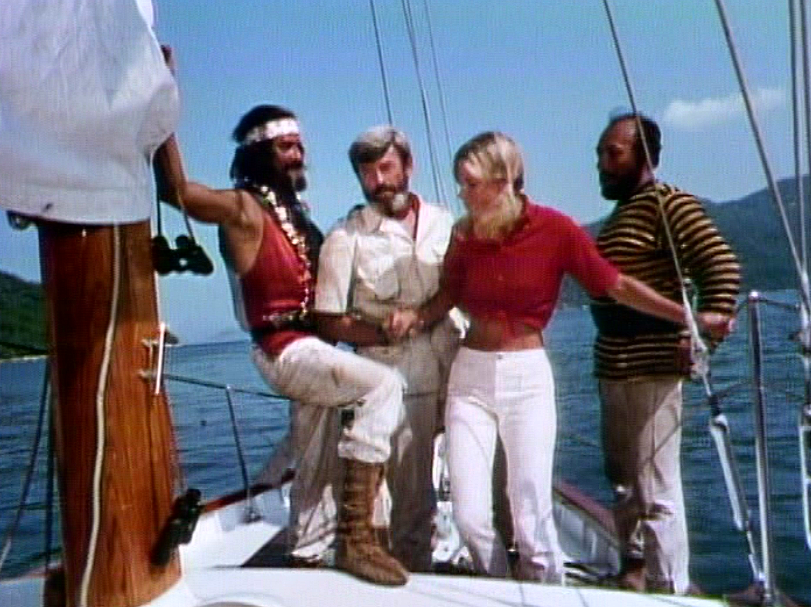 Fortunately, the suspense never led to a dismemberment, cannibal holocaust, or gang rape….. quite the contrary. One of the strangest things about Danger Island was that the fight scenes were often slapstick – Three Stooges style (sometimes with pies being thrown!). This was especially true when the fights involved Chongo – a super spastic idiot who spawned the wildly popular 70s catchphrase “Uh-oh, Chongo!”.