For many, it was a sad thing to see the many Blockbuster Video stores sit vacant, run out of business by Netflix and other on-demand services.  However, I never shed a tear.  I had lived through the early days of the video store, before Blockbuster came in and drove many of the mom-and-pop movie rental shops out of business.  For me, Blockbuster ruined things.  It didn’t have the character and uniqueness of the small, independently owned video stores.  So, the sight of an old Blockbuster building converted to a Quick Cash Title Loan doesn’t inspire much wistful sentiment.

So, this list of memories isn’t about the days of Blockbuster which owned the early 2000s and essentially all of the 1990s.  This is about the days when the video recorder was new, and there was excitement in the air – you could actually select a movie to watch yourself!  We take it for granted now; however, up until then, you were at the mercy of what was in theaters or what the 3 networks decided to throw your way. Now, the power was in your quaking hands.  Oh, the thrill of this new technology…. And oh, the disappointments…. 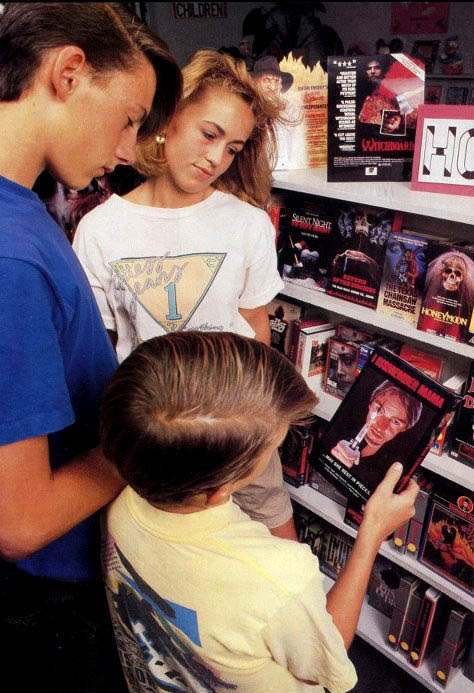 1. The Trials and Hardships of Obtaining the Coveted Card

Given the fact that all the stores that had sprung up overnight were mom-and-pop shops, it’s no surprise they didn’t have a lot of disposable surplus.  In other words, a stolen video was a big damn deal.  So, they made extra sure you were legit, and could be trusted.  That meant passing through a vetting process that would make getting a Top Secret security clearance with the Department of Defense seem like child’s play.

You had to fill out a form, hand over personal information (I’m told some even had an interview process)… then pay a huge security deposit!   But, even if you managed to somehow make the cut, you were by no means off the hook.  These were the days before networks and computer databases – so, if you lost that crummy little card, you were S.O.L..  God forbid you return a tape late or forget to rewind your tapes – not only would you be fined, you’d end up on “the list”.   Thus, your coveted membership to this strange new club was always poised on the razor’s edge.  One false move, and it was back to watching CBS’s Movie of the Week. 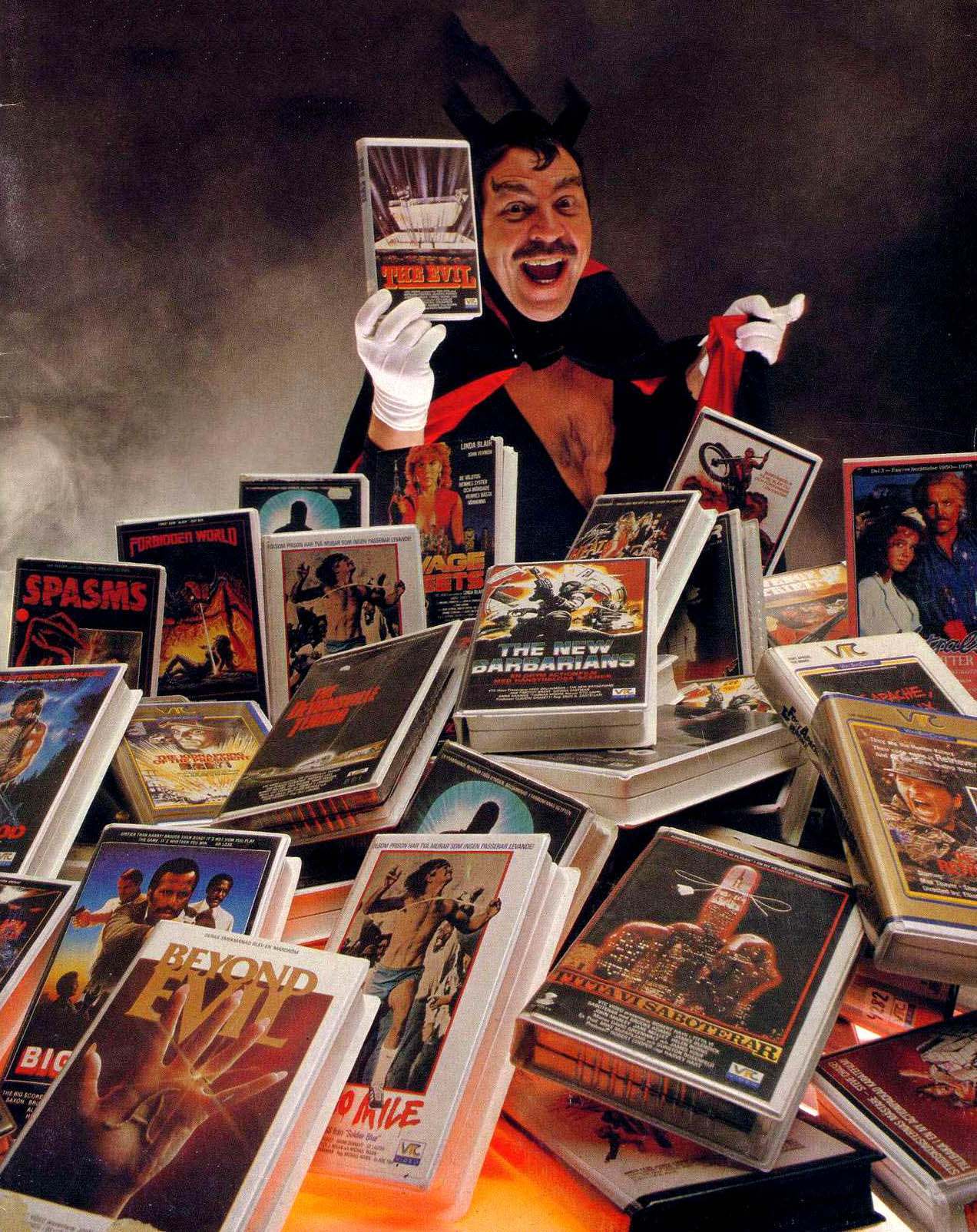 This is the one area that these early video stores really shined.  Blockbuster (and to some extent, Movie Gallery) basically had the same titles from store to store.  The shelves of the Draper, Utah branch looked a lot like the shelves of the Norfolk, Virginia branch.  Plus, the selection consisted almost exclusively of big sellers.  So, you’d have no trouble finding a good Eddie Murphy film – but good luck with the more obscure titles.

You see, the early stores were mostly owned and operated by a single individual.  Since his or her tastes dictated entirely what was on the racks, it resulted in a wild diversity of choices from store to store.  But even if you lived in a small town with only one store, you were still presented with a selection that was often far from the mainstream.  Sure, it still had Trading Places, but it also had some bizarre foreign import by some degenerate Euro-sleaze director (Jess Franco, I’m talking about you!).

The quantity was smaller, but the chance of serendipitous finds and discovering brands of film you’d never heard of was high.  The same principle holds for bookstores – it’s the small, independently owned stores that often have the most interesting selection. 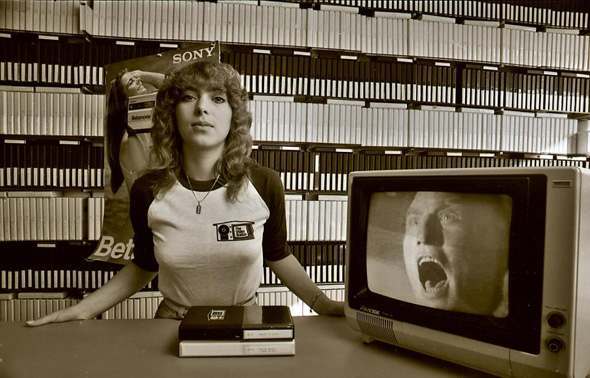 Since we’re talking about mom-and-pop shops, there was a lot of interaction with the proprietors.  Unlike the big chain superstores, you could rent without shame because you were an anonymous nobody.  However, in the early days, the chances were high that the person at the desk would strike up a conversation and even talk to you about the movie you were renting.  This could be a wonderful thing (I loved getting recommendations by these movie connoisseurs)…. But if you had in your possession a video of ill repute, things got awkward.

I distinctly recall being in the mood for a good bloody horror flick one evening after work in 1988, and so picked up Color Me Blood Red. It had the most gruesome cover I’d ever seen – basically, a woman was being eviscerated.  I was simultaneously repulsed and lured by this forbidden fruit – they didn’t show stuff like this on television; it had to be seen.  So the clerk wouldn’t identify me as a serial killer, I also snatched a copy of The Bounty, a respectable film, as a buffer.

To my horror, the beautiful daughter of the store’s owner was working the checkout.  What followed was 5 painfully uncomfortable minutes, with awkward glances from the girl and paralyzing guilt from me.  To make matters worse, the movie ended up not even being particularly gory or scary.  The whole ordeal had been for naught.  But it serves to illustrate the predicament of the early video store customer: you were surrounded by a diversity of films you’d never seen or heard of, that would never make it onto your local TV stations…. Yet, to rent them often involved a long walk of shame. 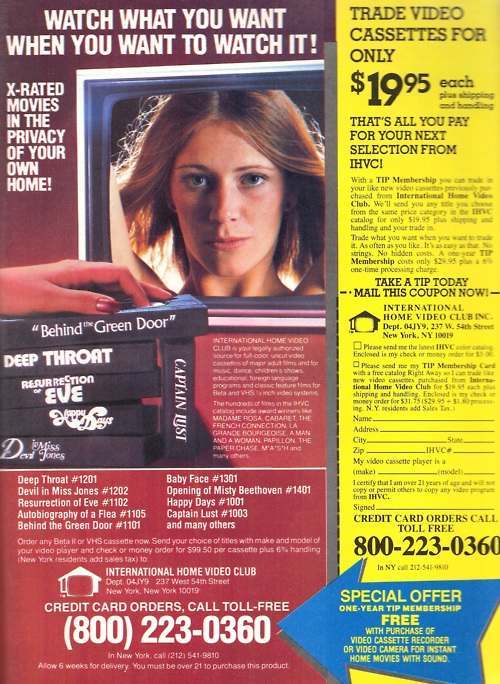 Naturally, porn’s significant influence and slice of the video market was evident in the early video rental establishment.  In most stores outside the Bible Belt, there was a separate room devoted to the X rated variety of tapes.  An often seedy, dingy, poorly lit little room – The Room of Intense Shame, if you will.  Therein, you would not only find illicit tapes but other males trying to look nonchalant, but obviously feeling bad about themselves.  It was reminiscent of the outside lines to the X-rated theaters in the 1970s – there may be nothing wrong with taking in a dirty movie, but you also didn’t want your friends and neighbors to catch you in the queue.

Even Blockbuster had these Rated X rooms in the early days (or at least the San Bernardino branch had one – I can’t personally attest to others).  But as the privately owned stores became extinct and Pay-Per-View bloomed, the need for these rooms dwindled to nothing.  I suspect many a Blockbuster storage room had, in a previous life, once been a Room of Intense Shame. 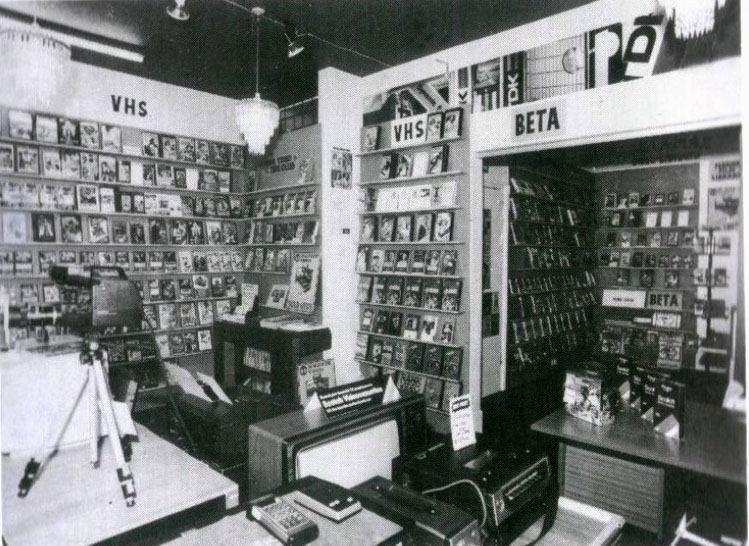 The war between these two formats was in full swing in the mid-80s.  Who would emerge the winner was still unknown.  The reasons behind VHS’s ultimate victory over an arguably better technology is a topic for another day.  Unfortunately, the fact that these small stores had to provide both formats meant that your selection was greatly diminished.  Mom-and-Pop only had “x” number of dollars to spend on their video selection; the fact that they had to buy 2 formats for each film meant their selection was reduced by half.

This sucked for the consumer, and was even worse for the poor, unfortunate Betamax owners.  Those machines weren’t cheap back then.  It should be noted that they were so expensive, these early stores would provide rentals of the machine itself.  Yes, it was not uncommon for someone to not only rent the tapes, but also take home the VHS or Betamax equipment!  Compare that with the ease of just clicking “play” on Netflix today.