In the 1970s space was the mission and the message. One thing occupied minds at NASA: could human beings live in huge spaceships? In the summer of 1975, Princeton physicist Gerard O’Neill, NASA’s Ames Research Center in Mountain View and Stanford University studied the dream of space colonies.

The project would be cost-effective. Humans would harvest the mineral riches of asteroids (trillions of dollars-worth of cobalt, iron, nickel and platinum). Sub-orbital tourism and full orbital tourism would be realised.  The ships would covert solar power into microwaves to be beamed back to Earth.

Electrical power is a multi-hundred billion dollar per year business today. We know how to generate electricity in space using solar cells…. By building much larger satellites out of hundreds of solar arrys, it is possible to generate a great deal of electrical power. This can be converted to microwaves and beamed to Earth to provide electricity with absolutely no greenhouse gas emissions or toxic waste of any kind. If transportation to orbit is inexpensive following development of the tourist industry, much of Earth’s power could be provided from space, simultaneously providing a large profitable business and dramatically reducing pollution on Earth.

Would humans want to live on a spaceship?

A few features of orbital real estate are worth mentioning:

Great Views. Many astronauts have returned singing the praises of their view of Earth from orbit. Low earth orbit settlements, and eventually settlements near Jupiter and Saturn, will have some of the most spectacular views in the solar system. Of course, all space settlements will have unmatched views of the stars, unhindered by clouds, air pollution, or (with some care) bright city lights.

Environmental Independence. On Earth we all share a single biosphere. We breathe the same air, drink the same water, and the misdeeds of some are visited on the bodies of all. Each space settlement is completely sealed and does no share atmosphere or water with other settlements or with Earth. Thus if one settlement pollutes their air, no one else need breathe it.

Designs were dreamt up. These orbiting ships would house thousands of people. Artists (Rick Guidice and Don Davis) were drafted in to visualise the concepts.

And they are wonderful. Back in the 1970s, humanity was going places. NASA explains the thinking:

Why build space settlements? Why do weeds grow through cracks in sidewalks? Why did life crawl out of the oceans and colonize land? Because living things want to grow and expand. We have the ability to live in space, therefore we will…

The key advantage of space settlements is the ability to build new land, rather than take it from someone else. This allows a huge expansion of humanity without war or destruction of Earth’s biosphere. The asteroids alone provide enough material to make new orbital land hundreds of times greater than the surface of the Earth, divided into millions of colonies. This land can easily support trillions of people.

The forward to Space Settlements A Design Study was clear:

The question, “What is feasible?” can be finally answered only by future historians. If in the 14th and l5th Centuries when new technology first made transoceanic voyages possible, European rulers had inquired what they should do with this new capability, no man could have been long-headed enough to perceive all the possibilities, nor persuasive enough to communicate his vision to others. We now realize that technology is but a part of any broad stride taken by man. A perception of advantage to be gained, resolve, organization, and a continuity of effort – some of the elements that must combine with technology to effect a major human advance – is indeed vital

Space exploration, an active pursuit for less than two decades, has already displayed an extraordinary power to alter our viewpoints and stretch our minds. The concept of spacecraft Earth, a sphere of finite resources and ominous pollution, became pervasive and powerful at the same time we first received good photographs of our planetary home. The study summarized in this volume is another mind-stretcher. As explained on the following page, settlement in space is not an authorized program, and no man can now say if or when such a dazzling venture may be formally undertaken. But by their efforts to put numbers on an idea, to assess the human and economic implications as well as technical feasibility, the participants in this effort have provided us with a vision that will engage our imagination and stretch our minds

It’s all utterly fantastic. This was humanity daring to dream.

It never happened, of course. Guidice recalls that O’Neill saw the window of opportunity closing:

“One of the most memorable things I ever heard him say was, ‘If we don’t do it right now,’ meaning in the next 20 years, and that was 20 years ago, ‘then we’ll never do it, because we’ll be overpopulated and the strain on the natural resources will be the number one priority. We will not have any sort of inclination to see this through.’” 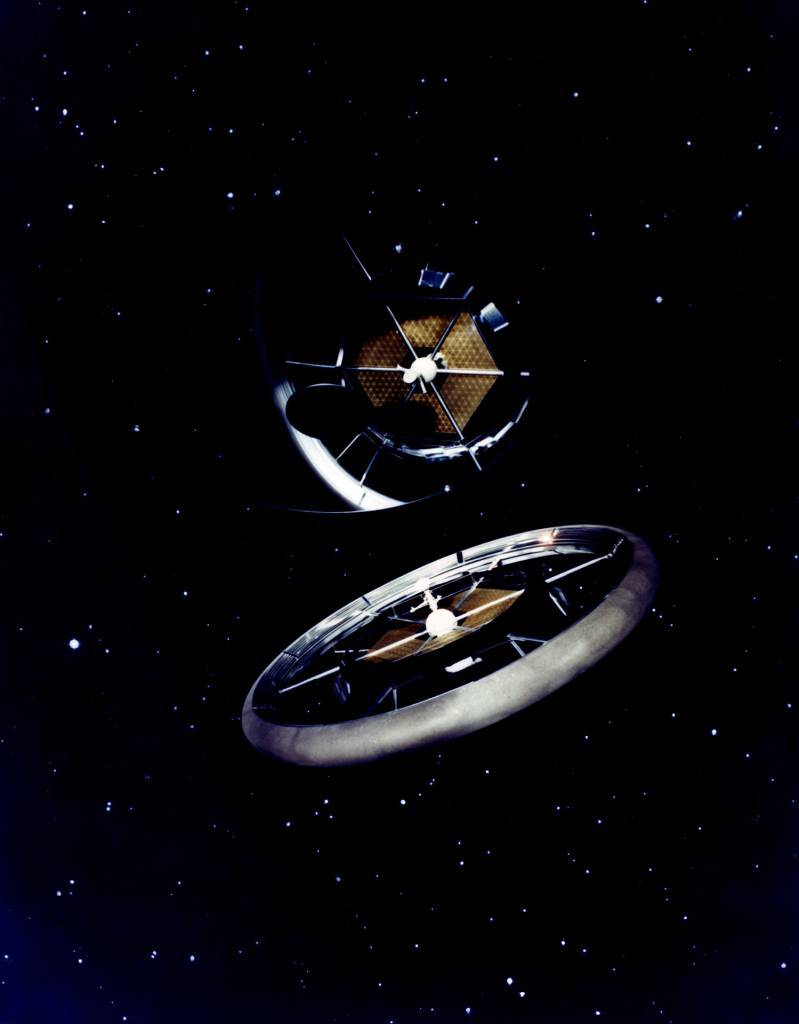 “The idea was that these things are big enough that you could basically build nations in them. I lived in the Bay Area at the time, with the green hills and such, and I was very enthused to encapsulate that life and that area.” – Don Davis 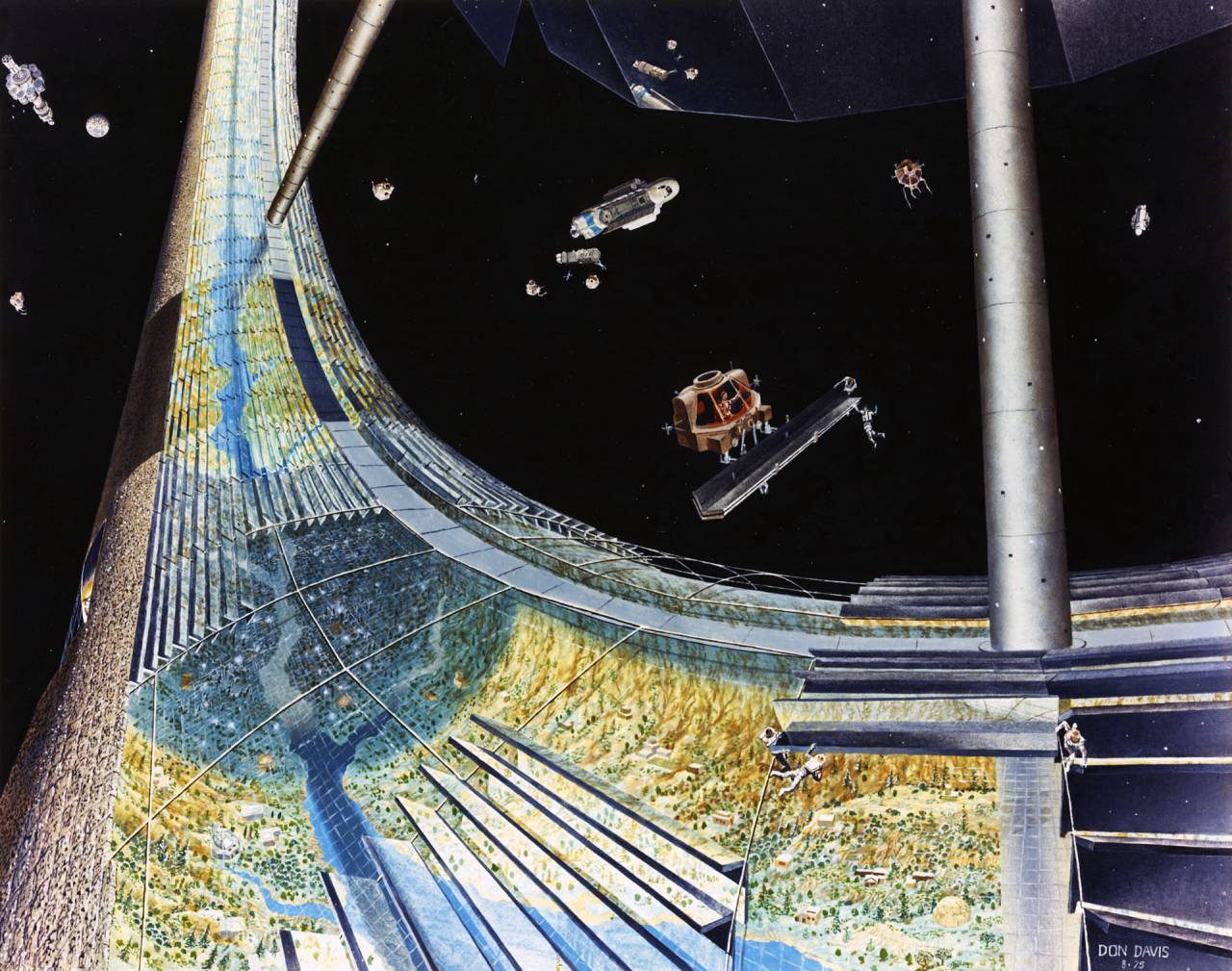 NASA explained how the floating cities would work:

The focus of the system is a space habitat where 10,000 people work, raise families, and live out normal human lives. [A structure] orbits the Earth in the same orbit as the Moon in a stable position that is equidistant from both Earth and Moon. This is called the Lagrangian libration point, L5. The habitat consists of a tube 130 m (427 ft) in diametral cross section bent into a wheel 1790 m (over 1 mi) in diameter. The people live in the ring-shaped tube which is connected by six large access routes (spokes) to a central hub where incoming spacecraft dock. These spokes are 15 m (48 ft) in diameter and provide entry and exit to the living and agricultural areas in the tubular region. To simulate Earth’s normal gravity the entire habitat rotates at one revolution per minute about the central hub.

Much of the interior of the habitat is illuminated with natural sunshine. The Sun’s rays in space are deflected by a large stationary mirror suspended directly over the hub. This mirror is inclined at 45 degrees to the axis of rotation and directs the light onto another set of mirrors which, in turn, reflect it into the interior of the habitat’s tube through a set of louvered mirrors designed to admit light to the colony while acting as a baffle to stop cosmic radiation. With the help of abundant natural sunshine and controlled agriculture, the colonists are able to raise enough food for themselves on only 63 ha (156 acres). The large paddle-like structure below the hub is a radiator by which waste heat is carried away from the habitat.

Abundant solar energy and large amounts of matter from the Moon are keys to successfully establishing a community in space. Not only does the sunshine foster agriculture of unusual productivity, but also it provides energy for industries needed by the colony. Using solar energy to generate electricity and to power solar furnaces the colonists refine aluminum, titanium, and silicon from lunar ores shipped inexpensively into space. With these materials they are able to manufacture satellite solar power stations and new colonies. The power stations are placed in orbit around the Earth to which they deliver copious and valuable electrical energy. The economic value of these power stations will go far to justify the existence of the colony and the construction of more colonies. 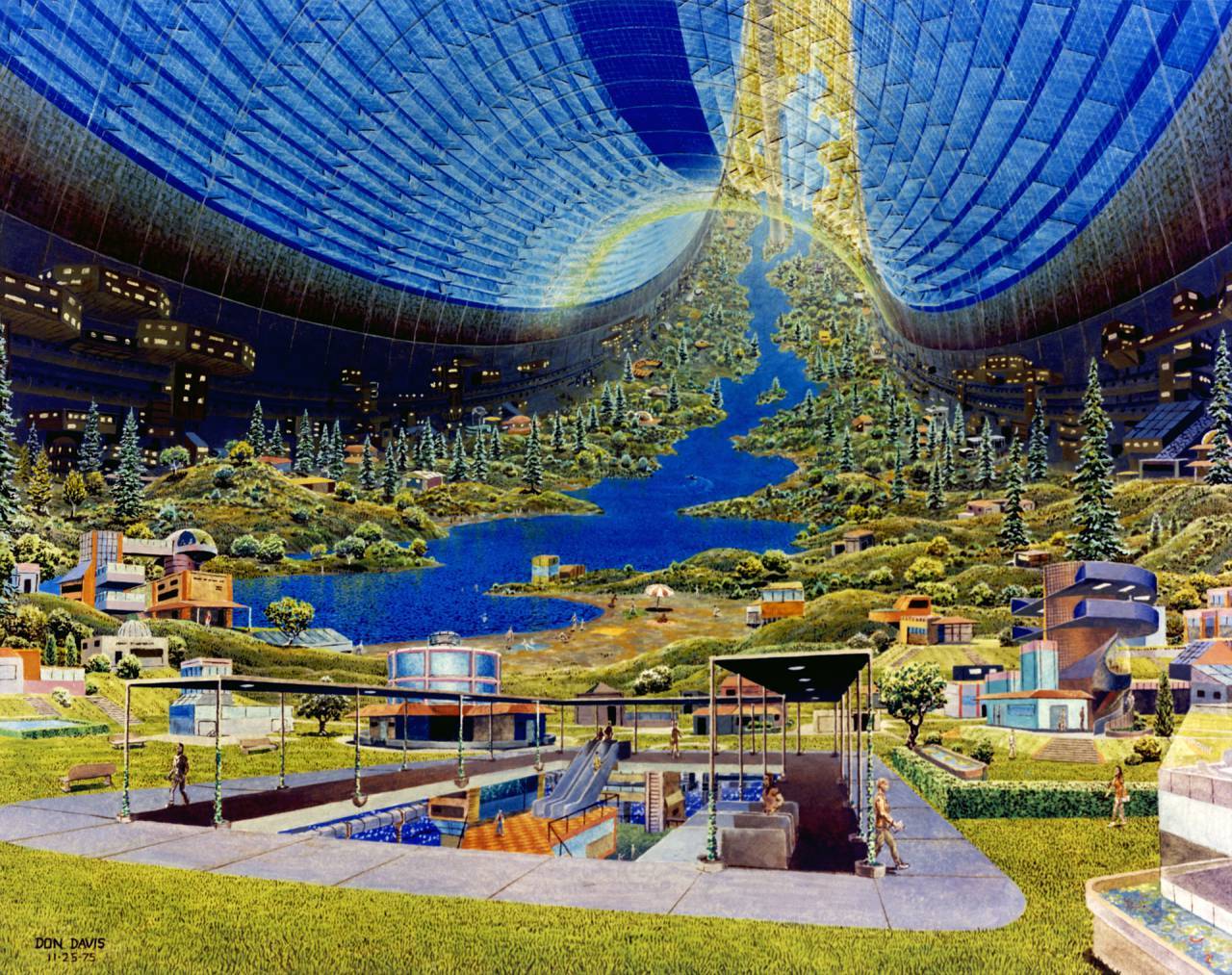 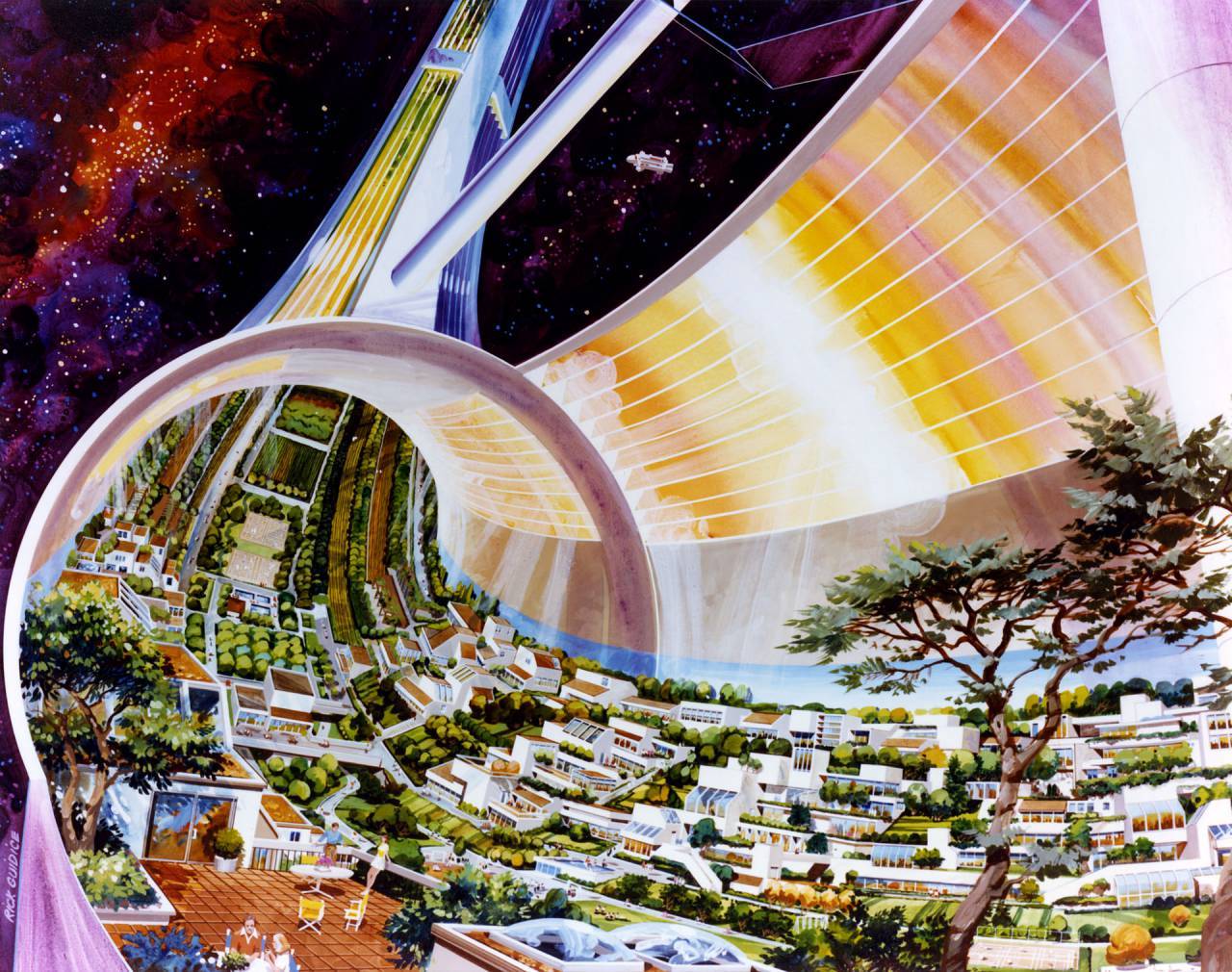 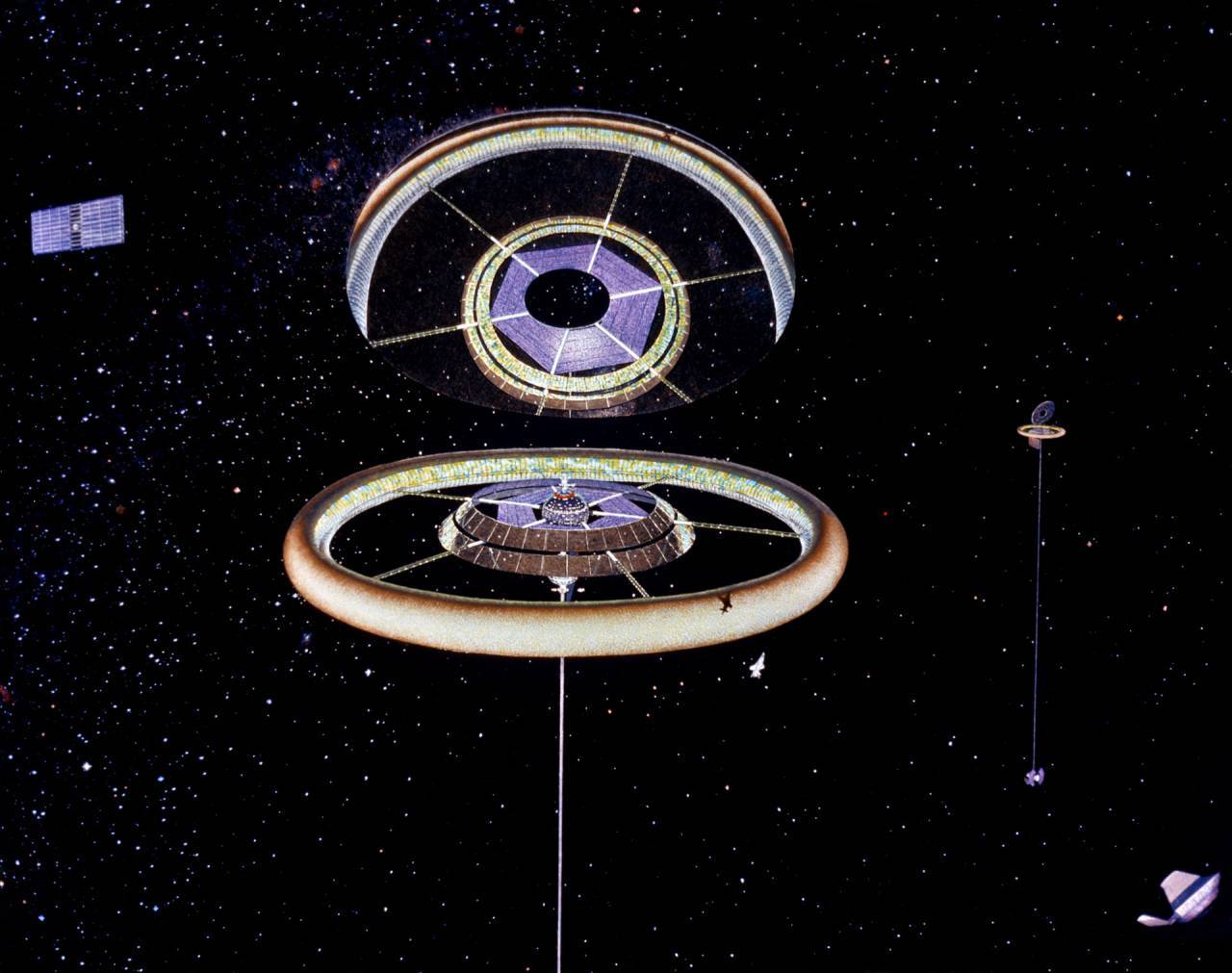 Bernal Spheres: Population: 10,000. The Bernal Sphere is a point design with a spherical living area. 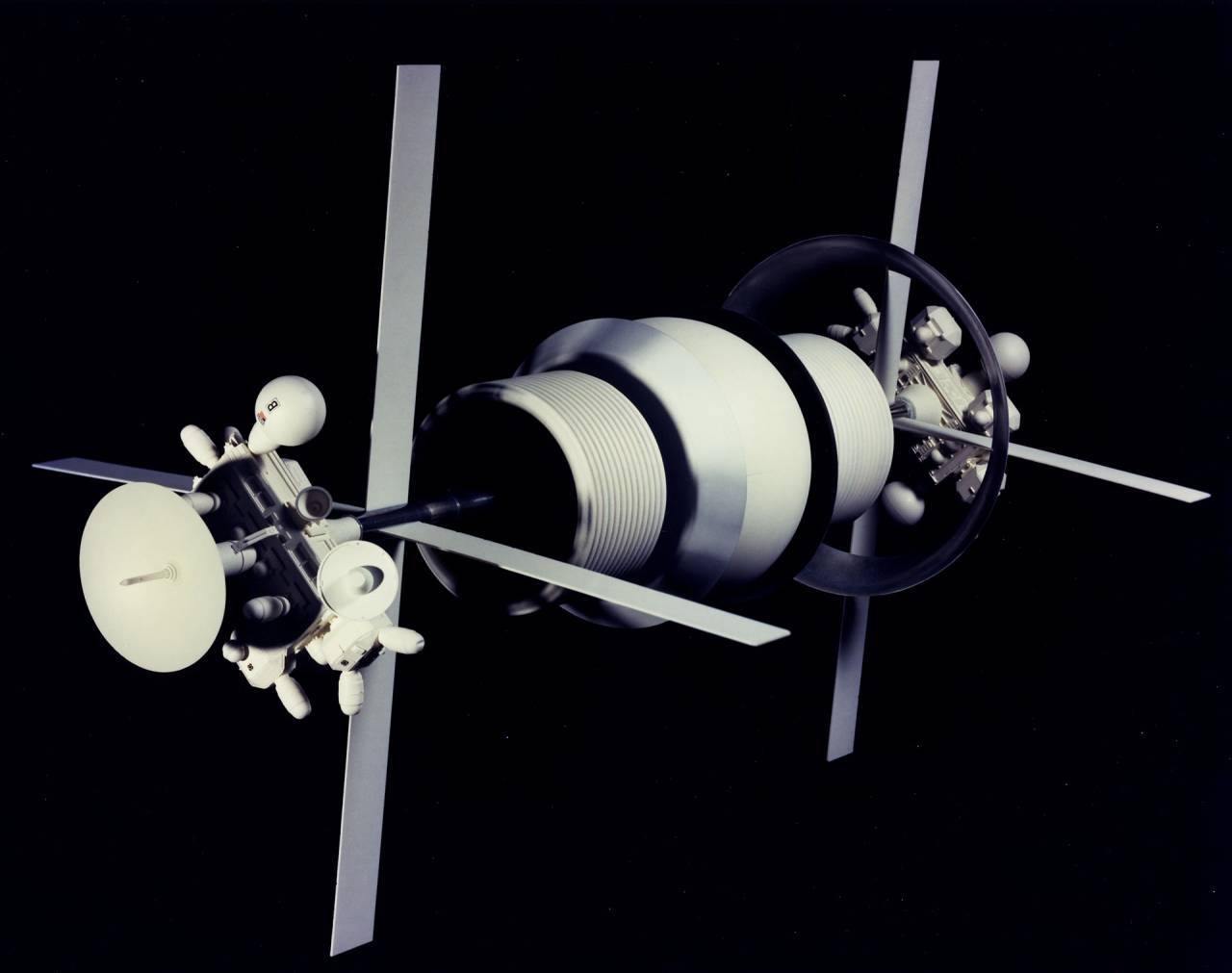 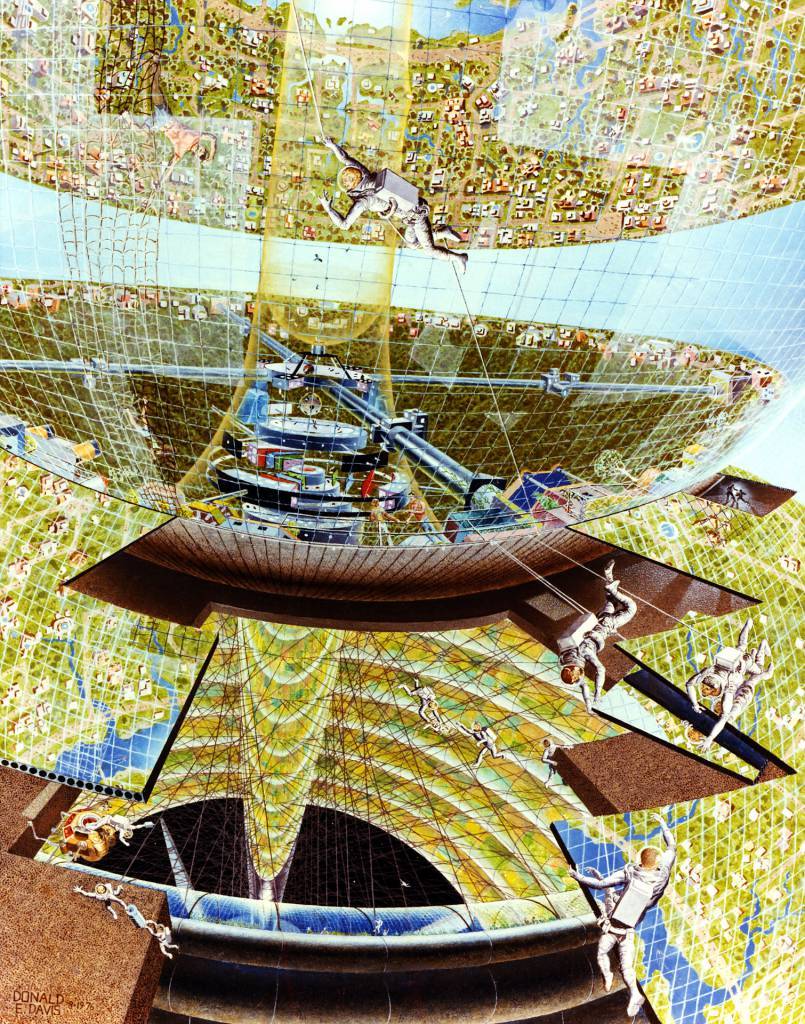 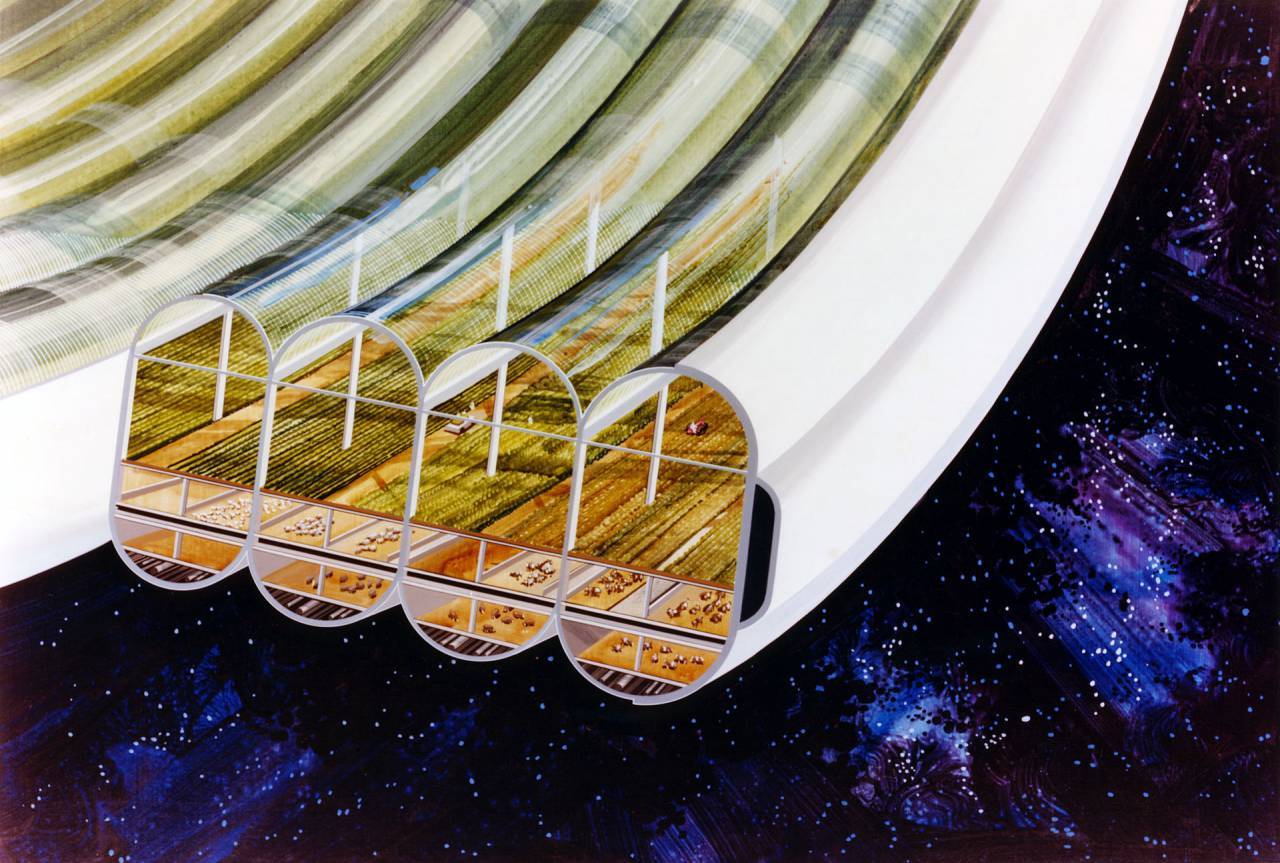 “This is a cutaway of those tubes we were looking at. Inside you see the sheep, and the cows, and the pigs, and the farmer with the tractors, and people harvesting. Lettuce and broccoli, I guess, and tomatoes and cucumbers.” – Guidice 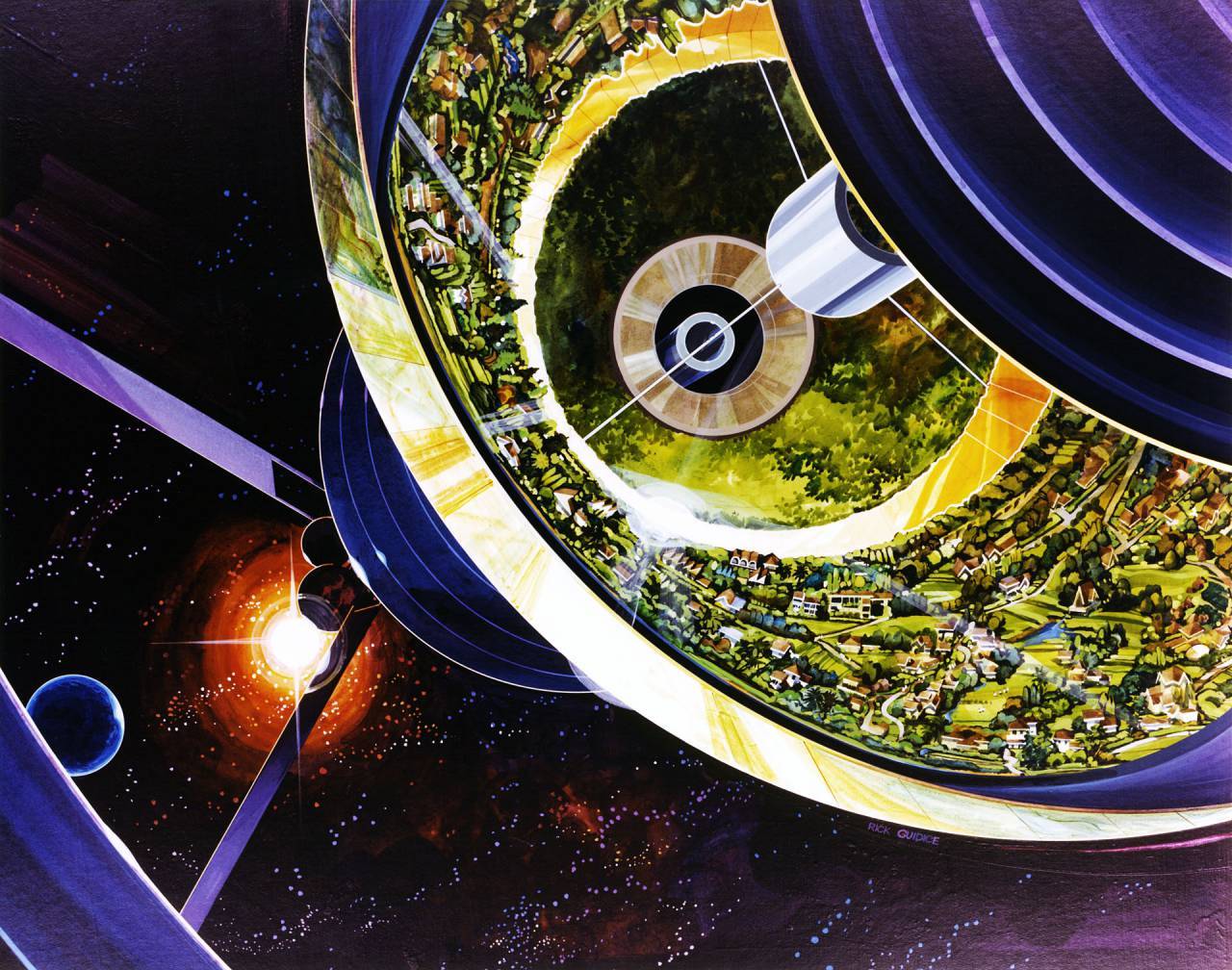 “Nebulae pictures always intrigued me, so I did a painting one time using a very active, exciting background, and it was received real well. In actuality the blackness of space is absolute, where I just threw these more romantic nebulae type images into the context. As an artist I couldn’t help myself. And nobody said not to do it, so away we went.” – Guidice 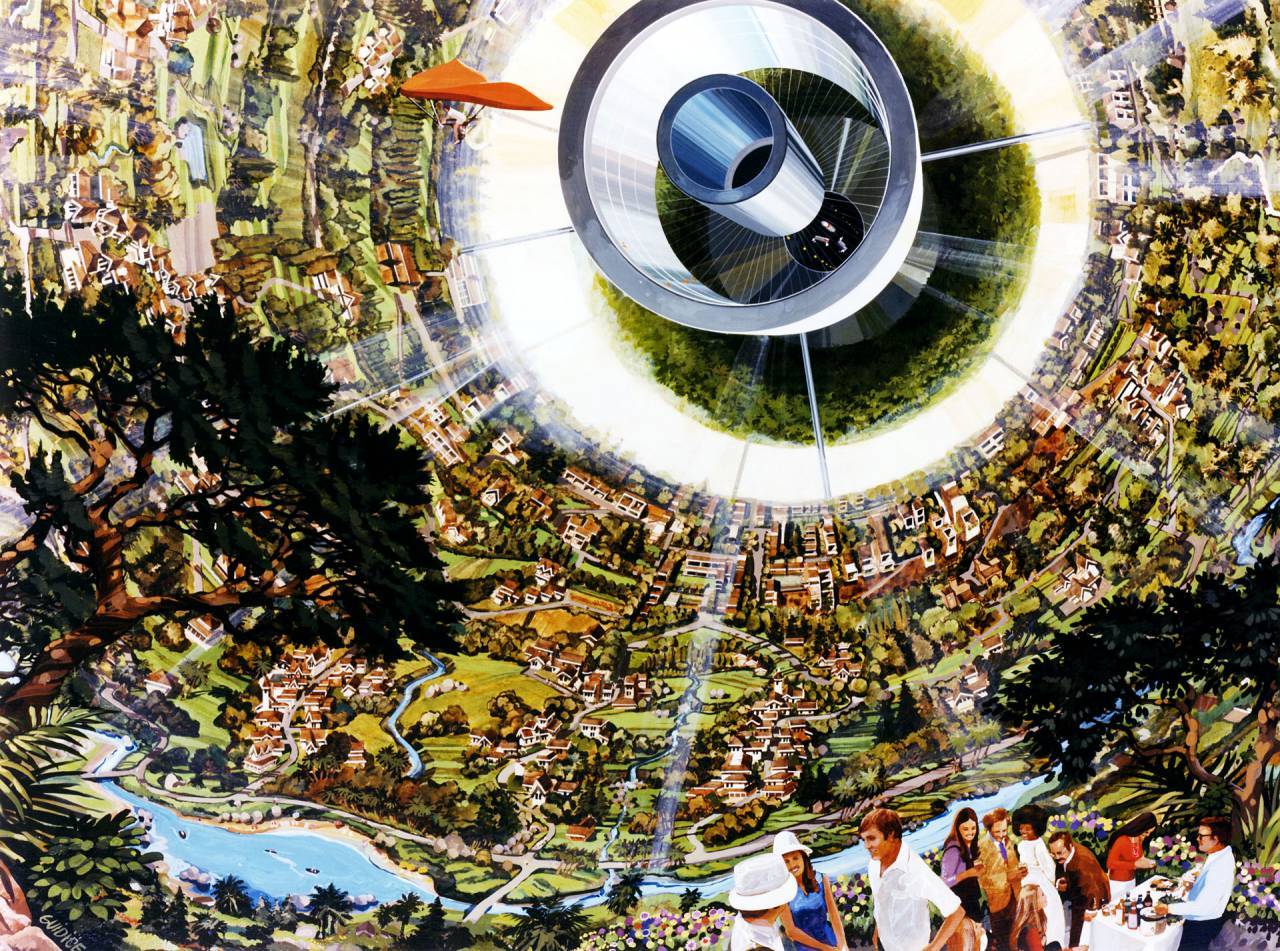 You could technically free yourself from gravity there, if you just stopped rotating—if you got off the ground. The rotation creates the gravity, but if you were to match the speed of the rotation, it would become zero. So you could float off and float around in there quite easily.” – Guidice 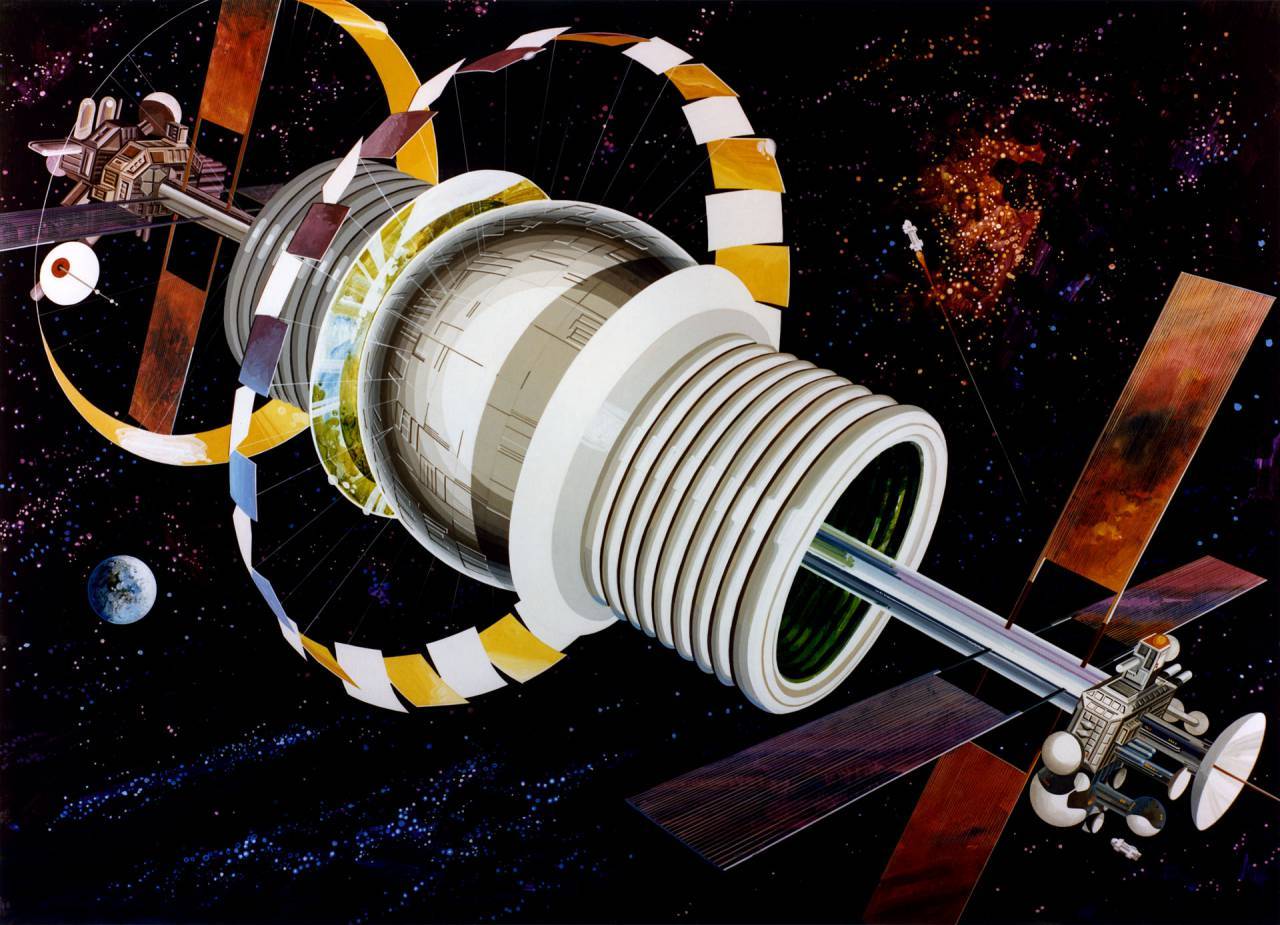 “Way out at the end is the industrial package, then we have our giant solar panels to gather energy, then there’s a polished tube that goes down the center into the inside and these tire-like cylinders that go on down.

“The green inside is the agriculture area. The round sphere beyond that had the habitat inside. Those mirrors that are at different angles shine down on those other mirrors that are right next to the sphere and then shine through a window into the inside of the colony.” – Guidice

Cylindrical Colonies: Population: Over a million. 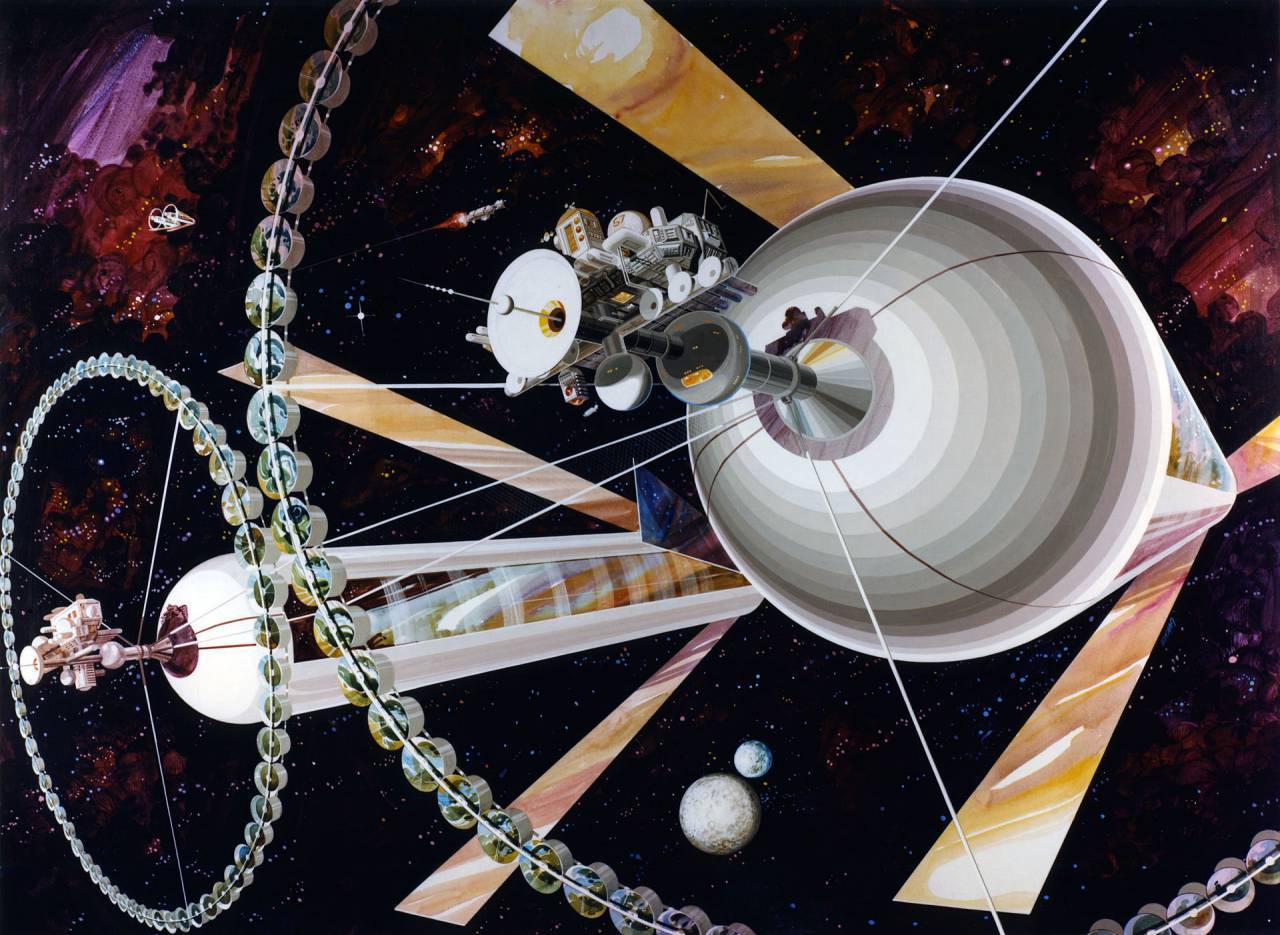 “…[the pods] rotate themselves, they have their own gravity, and they pivot on those rings that go all the way around. On the end of these cylinders was a zero-gravity manufacturing area, where manufacturing and producing energy or whatever else they were doing that was best suited for zero gravity took place…. I just invented all that. Space-stuff.

“The idea with the big mirrors and the windows is that they’re opening and closing to create night and day. The cylinders point directly at the sun, so there’s no sun going directly in the windows. At night these large reflectors close up and can protect the glass and stop the sunlight to create night. Then they open up slowly to create day, open more and more until it’s finally open about noon, and then start closing down slowly in the afternoon to replicate the sun throughout the day.” – Rick Guidice 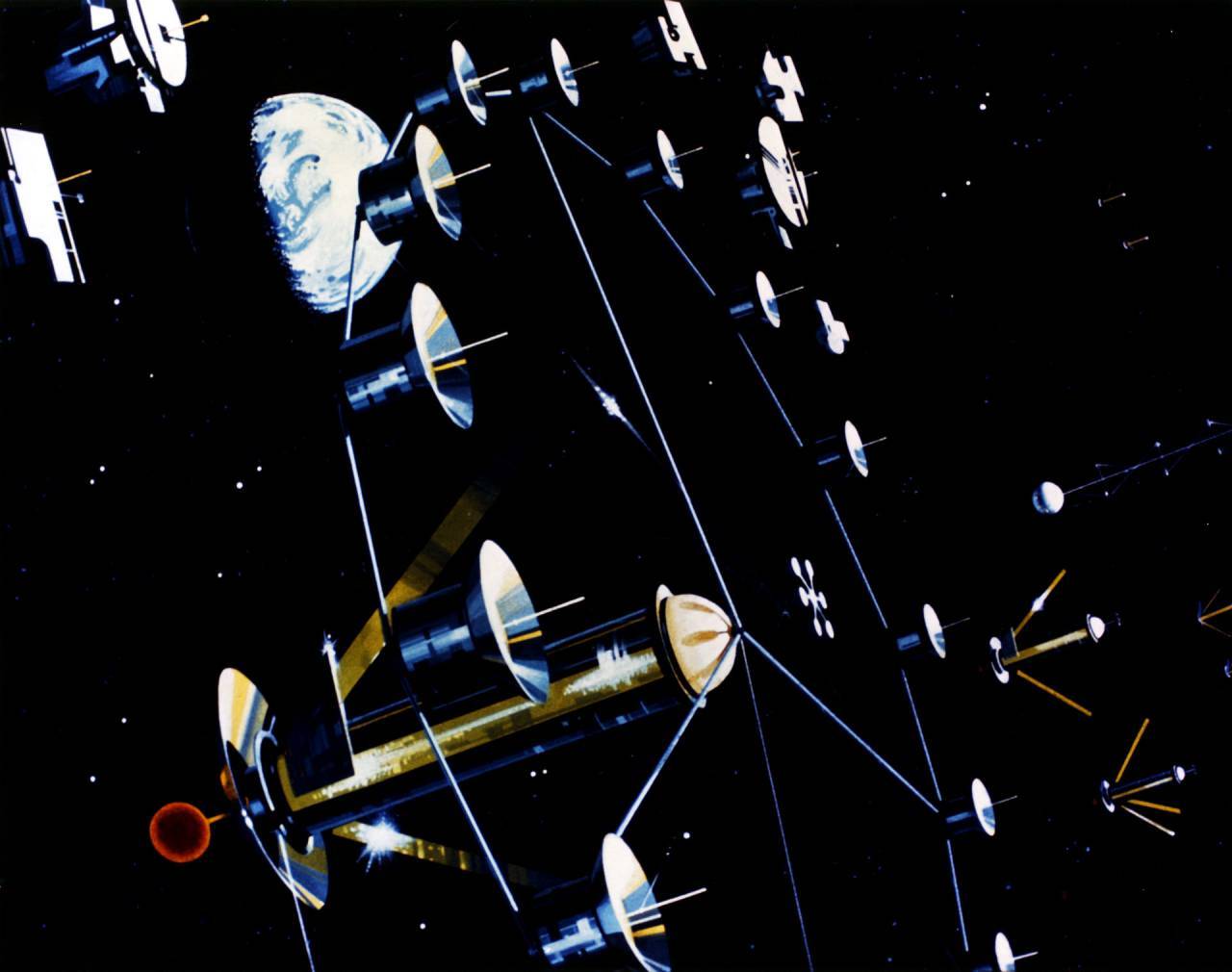 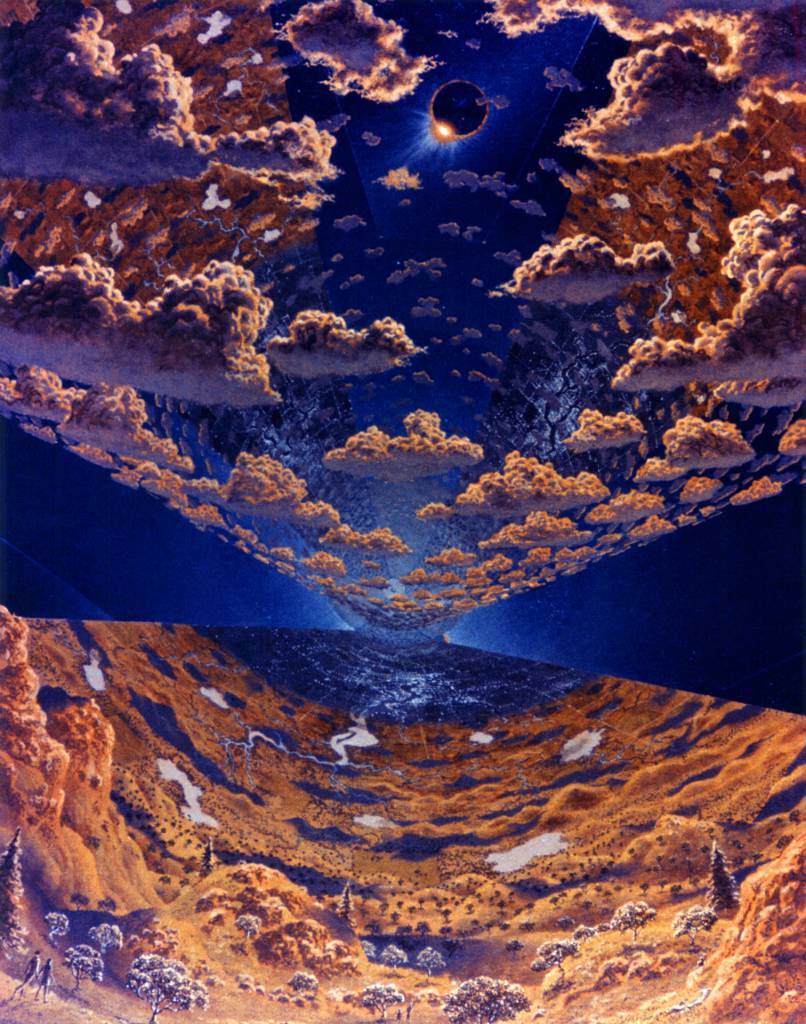 “Every once in a while, the Sun will move behind the Earth, causing an eclipse [from the colony’s perspective]. During that time, the lighting gets all red.” – Don Davis 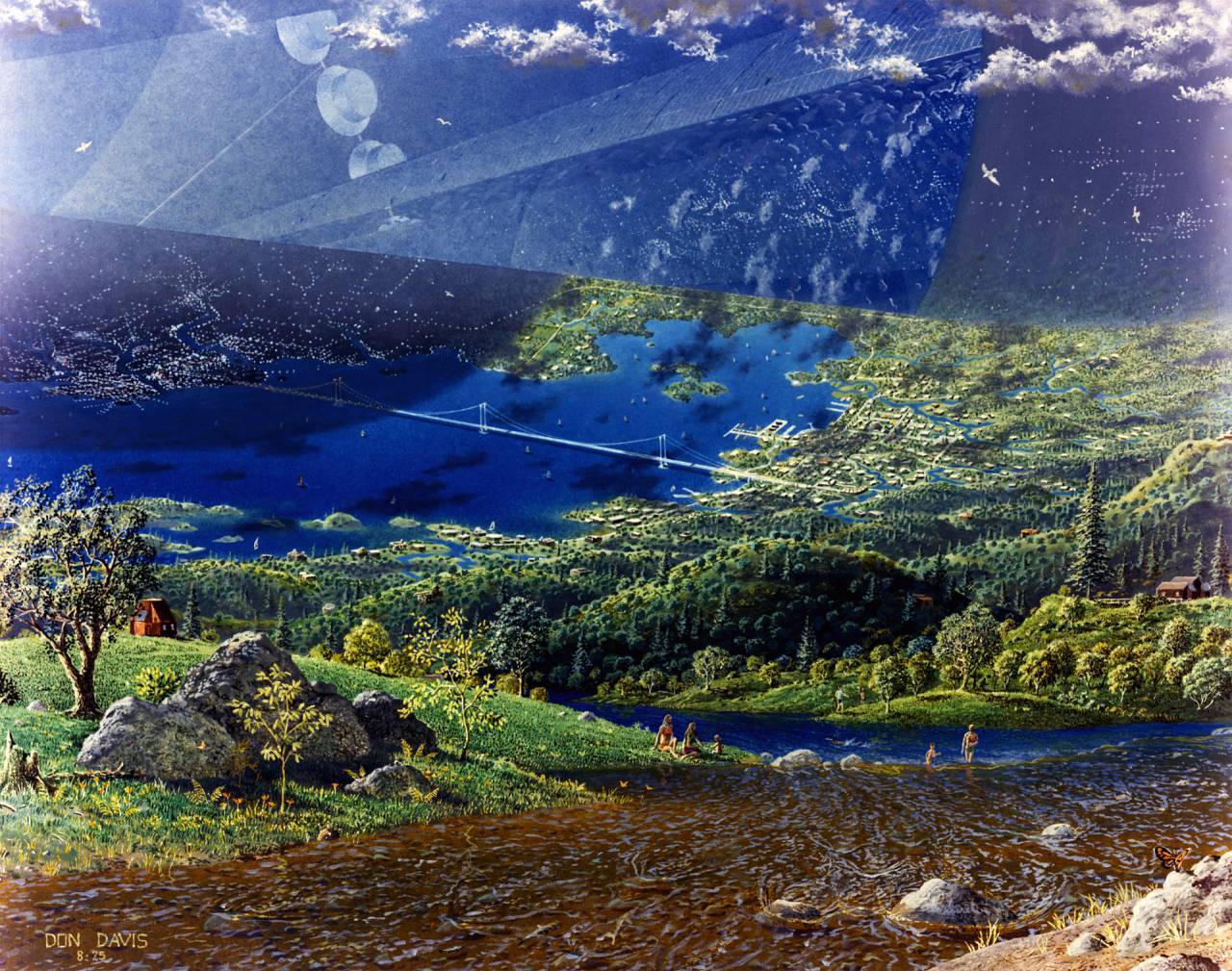 “It became a stepping stone—people who lived there would be free of the earth’s gravity and would be free to travel and do other things, like asteroid mining. They would go out on a large mission and capture an asteroid and mine all the valuable ores out of it. [They’d] then shoot them through a linear accelerator that would decay the orbit and would bring this mass of material closer and closer to the Sun until it got to the orbit of the Earth. They would then unload, reverse the process to stabilize the orbit, and take all the material, using it to built whatever was required, or returning it to the Earth as an economic commodity.” – Guidice 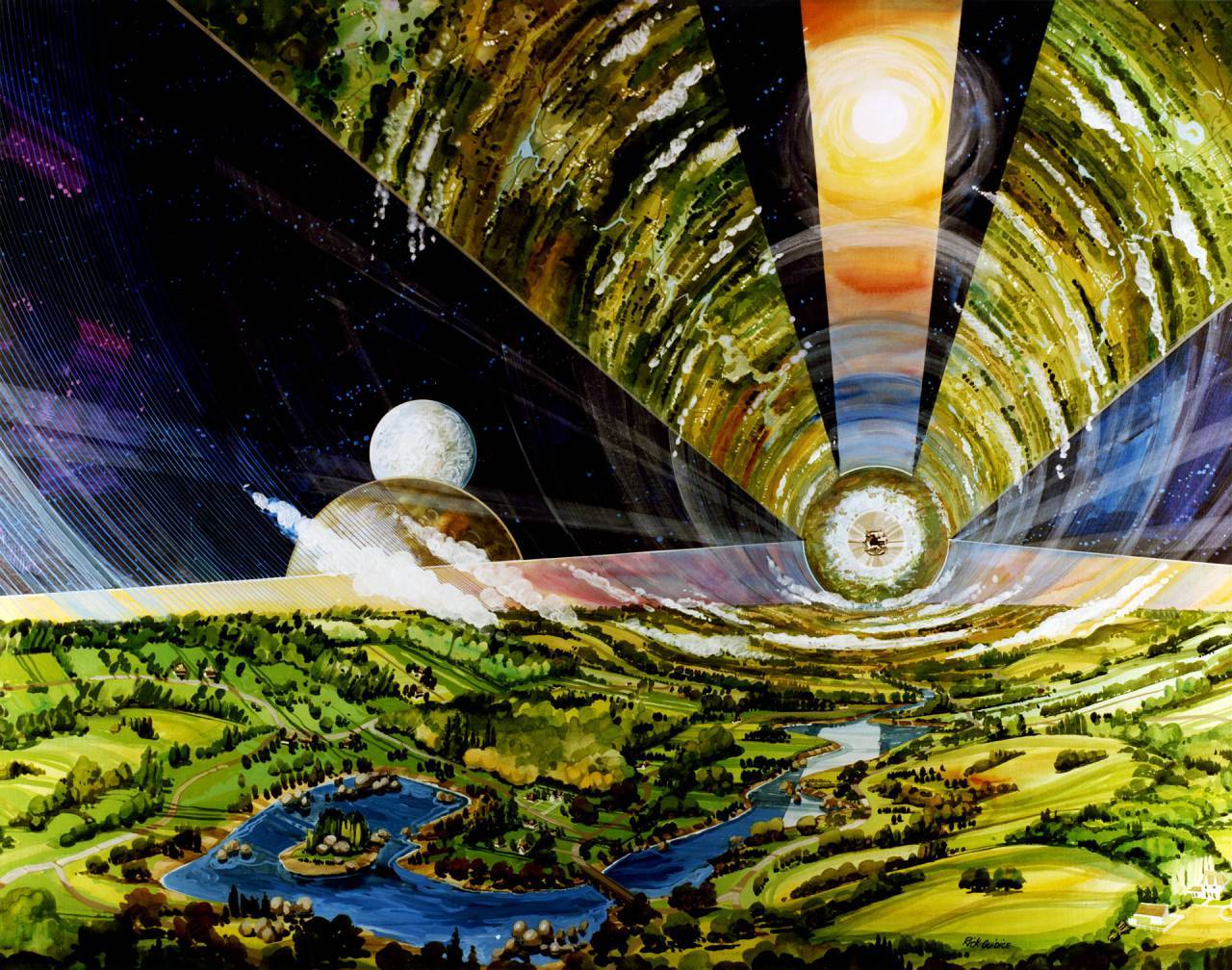