For whatever reason, during the 1960s and 70s, the children of the world upgraded their plain lunch pails to become pop culture billboards.  The trouble was, the TV shows, movies, etc. depicted on the sides weren’t always something you’d want to advertise to your school mates. We’ve explored this before, but, as promised, here are 13 more lunchboxes which were likely the source of great shame for kids of the 60s and 70s. 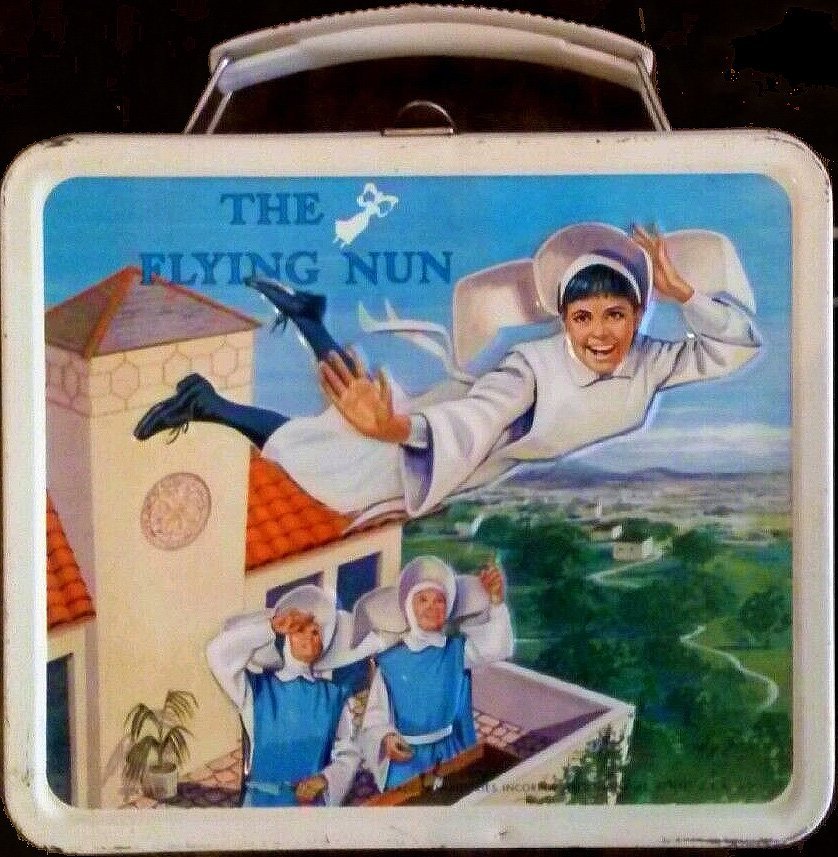 The poor sap who owned this lunchbox probably wished he or she could fly away like the nun.  Alas, there would be no escape from the relentless teasing.

But it wasn’t always what show was presented on these steel containers that made things uncomfortable, but rather how it was presented…. 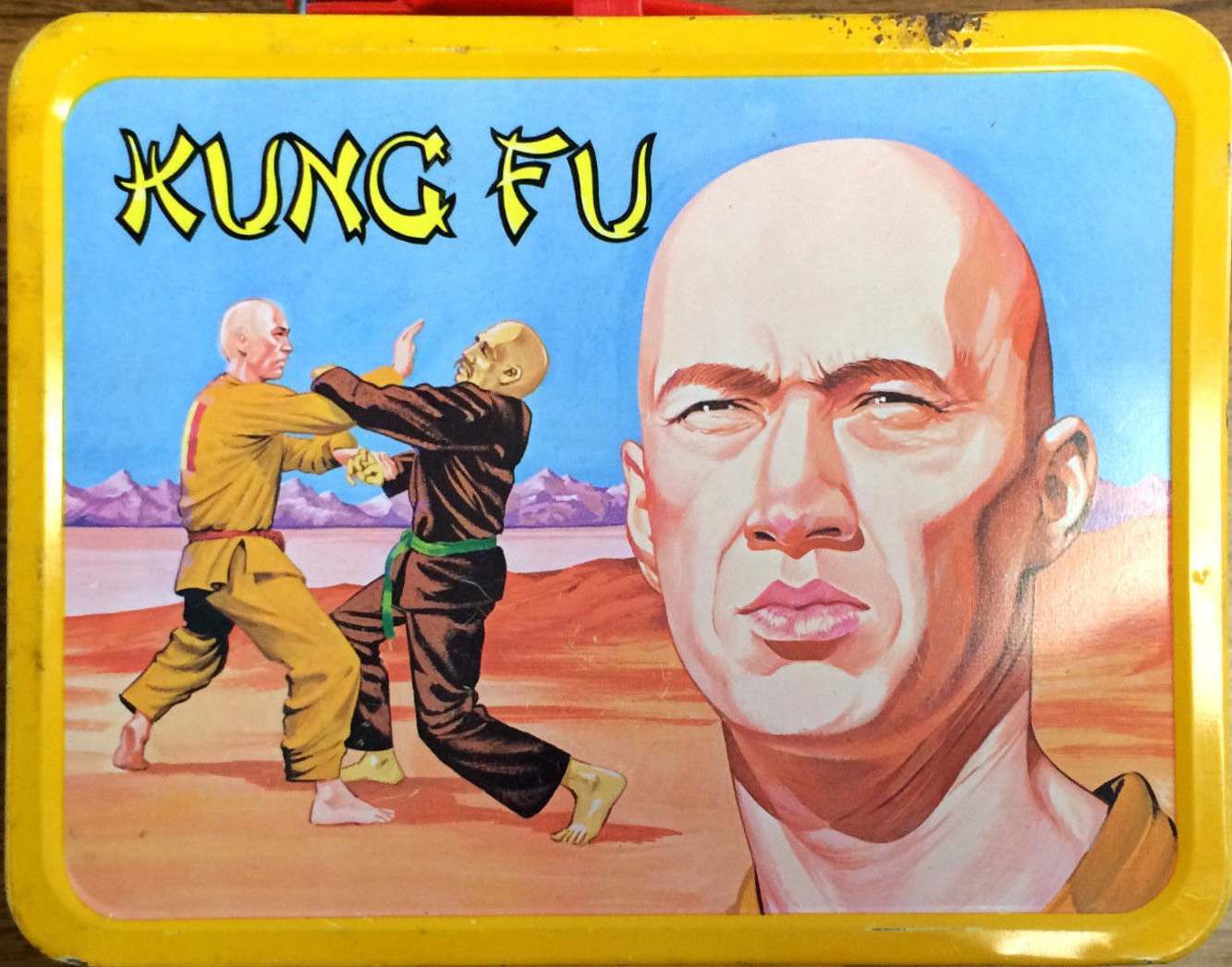 Kung Fu was a respectable enough show, suitable for lunchbox adornment.  Yet, Carradine’s giant pasty face is just a little disconcerting – not something I want to stare at while I eat my PB&J sandwich. 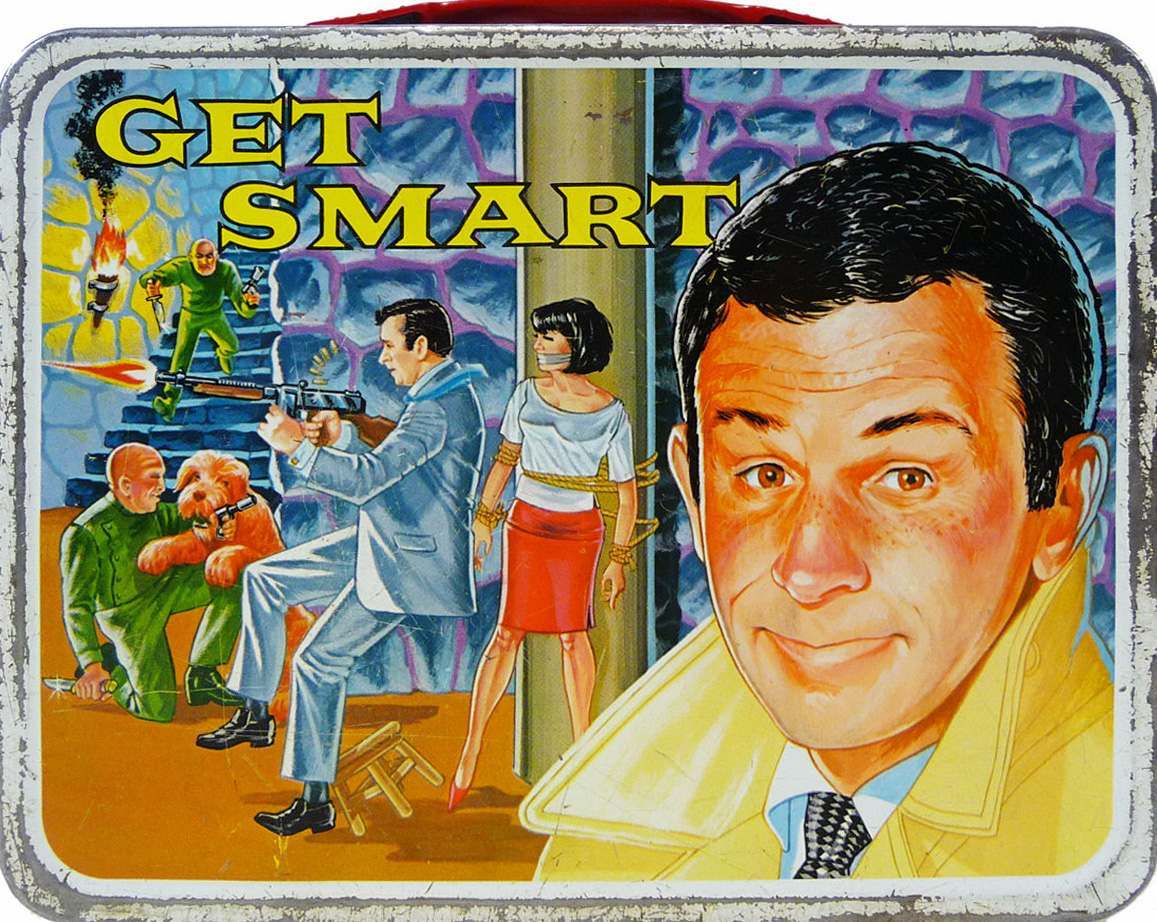 Speaking of giant faces making your lunch break uncomfortable, this Get Smart lunchbox is no less troubling. 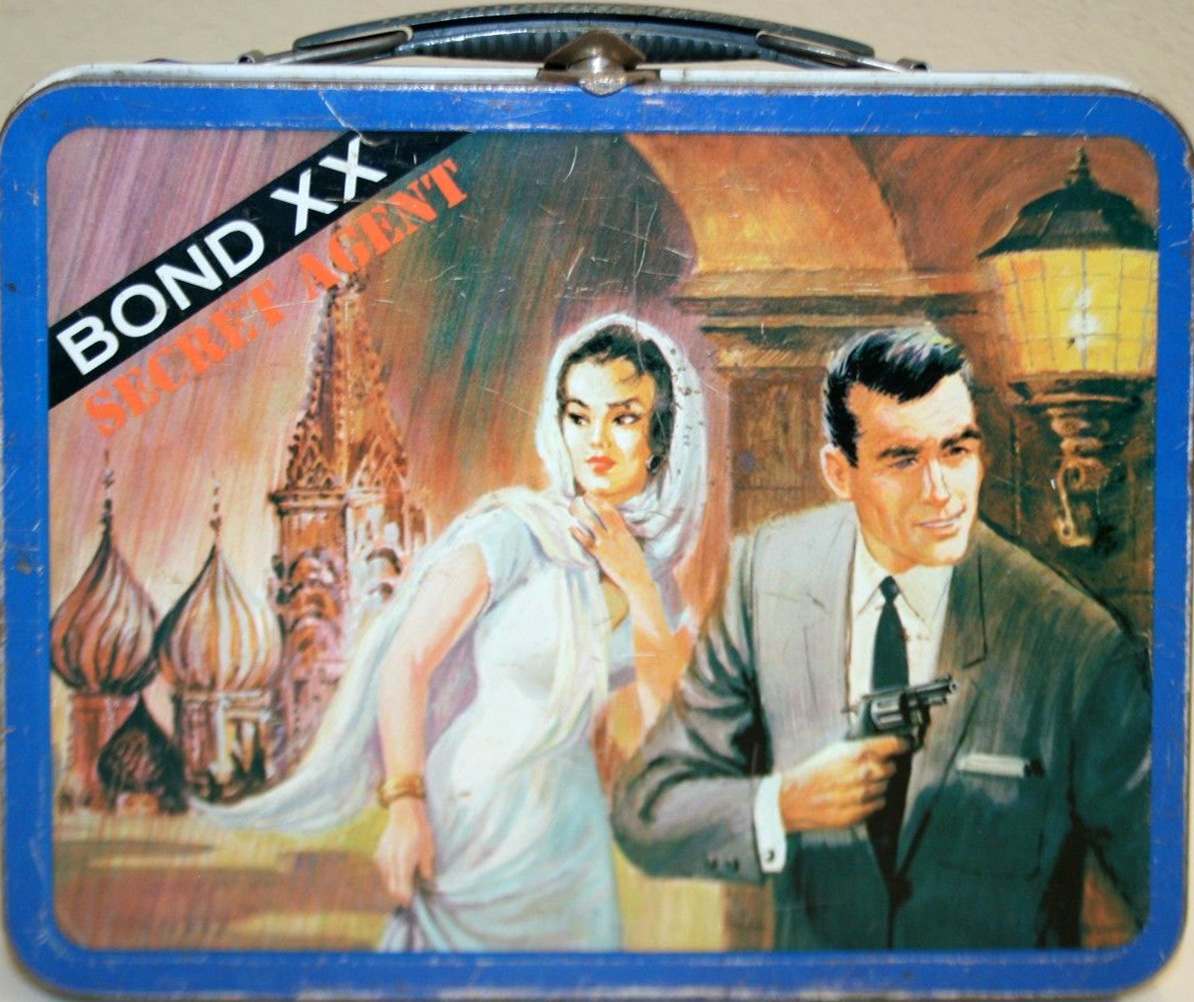 A generic James Bond clone – “Bond XX: Secret Agent”.  Do you think the school bully will pick up on the fact that you’re carrying a cheap imitation?  Probably best to brown bag your lunch just in case. 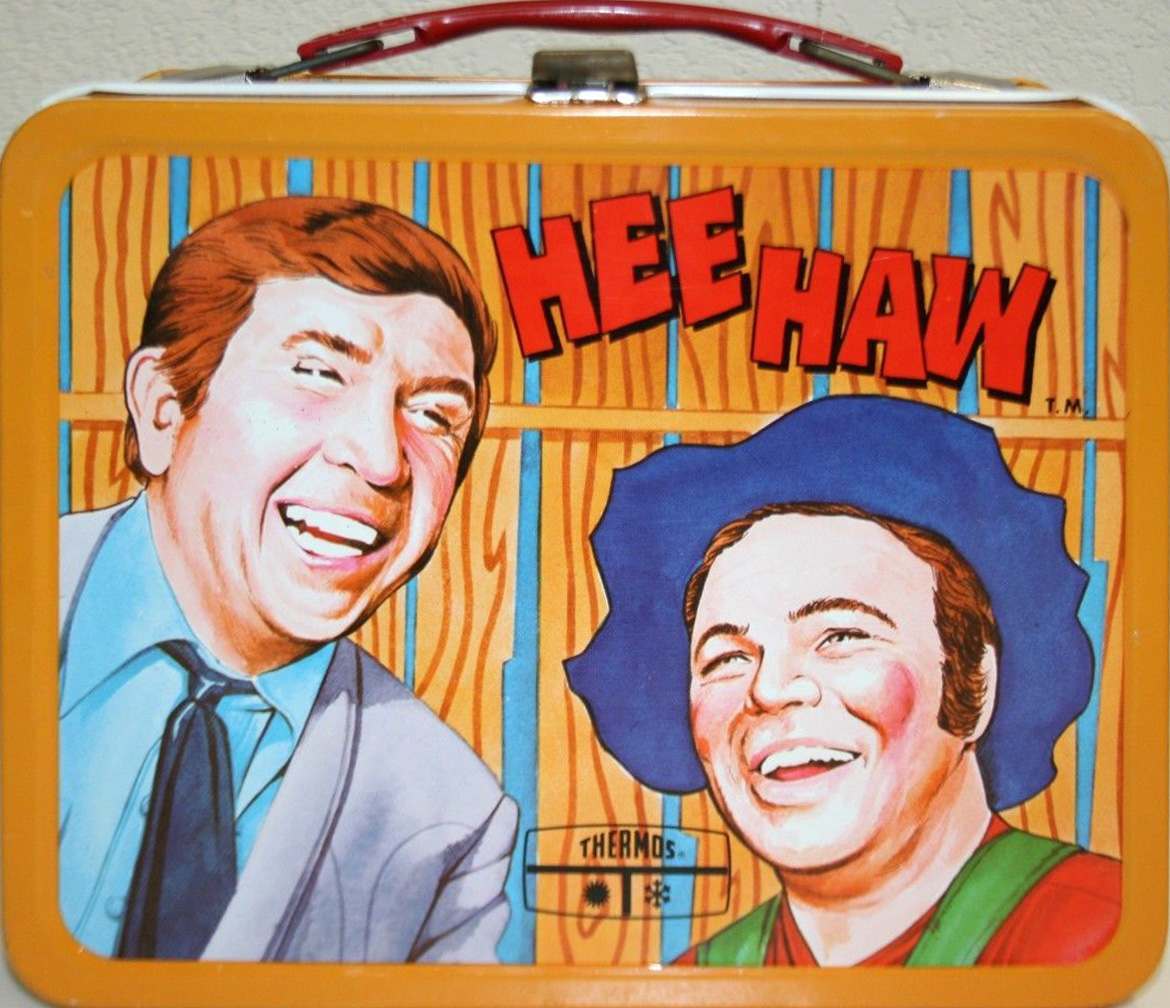 The Buck Owens caricature looks fairly accurate; but Roy Clark looks like a blushing Little Lord Fauntleroy.  What the hell? 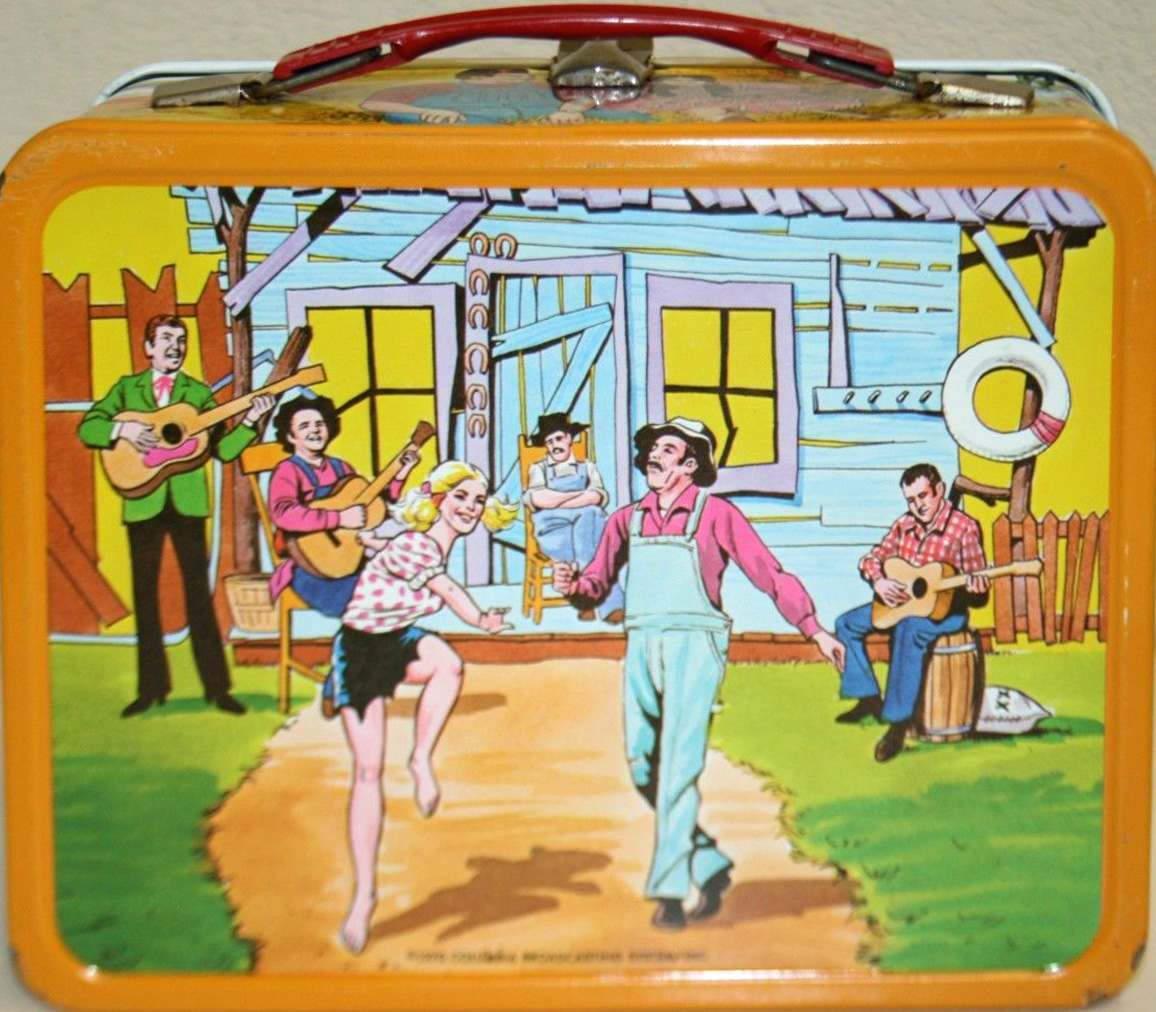 Kids with a lunchbox featuring a Hee-Haw hillbilly jamboree no doubt envied the kids with the Evel Knievel lunchboxes…. an early lesson on how life is unfair. 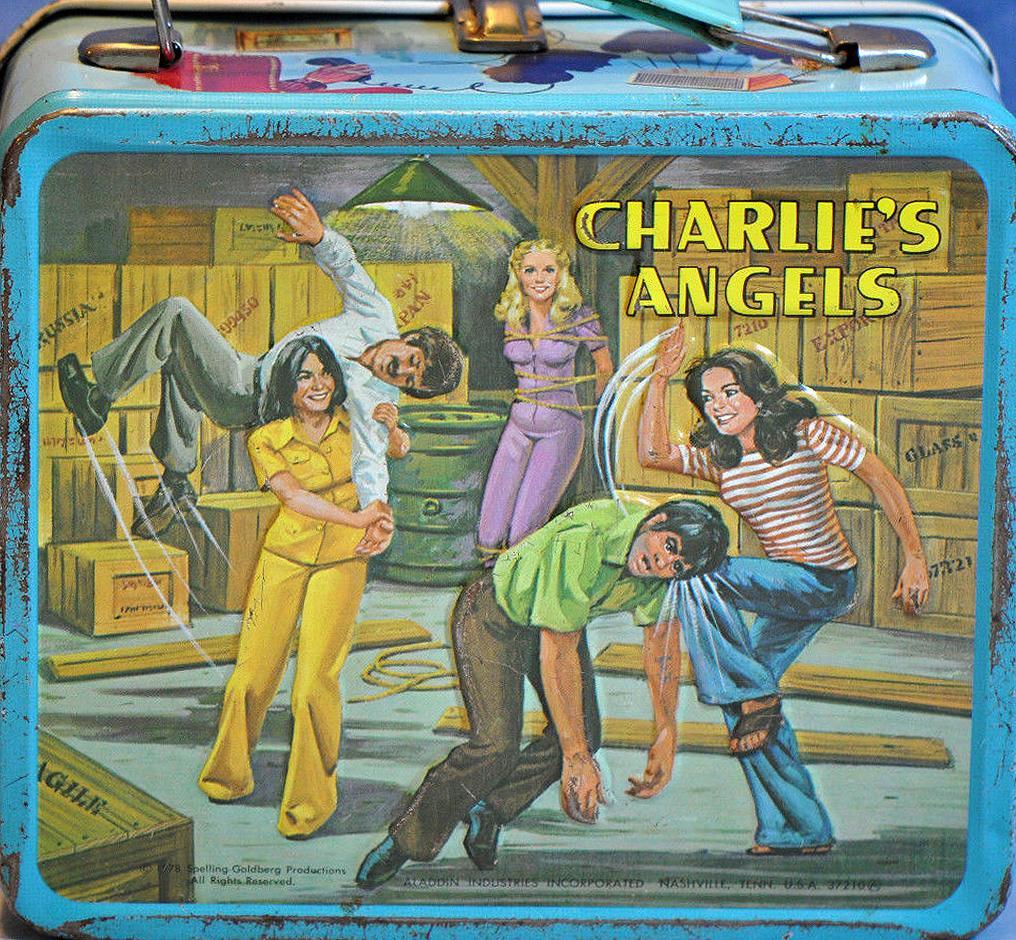 Sabrina and Kelly open up a can of whoop-ass on a couple of well-dressed stockyard workers. Meanwhile, Kris is bound and wearing a very form-fitting outfit…. no doubt causing some curious new sensations among boys at the lunch table. 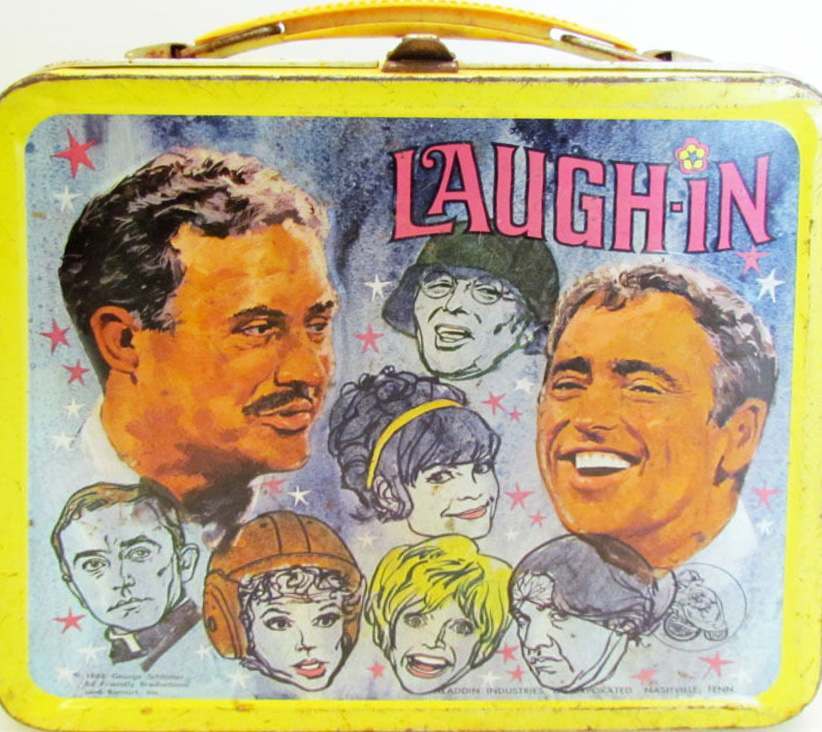 I remember Laugh-In as a very grown-up television program – not something the junior-high set would ever in a million years care for.  Yet, here it is, bedazzling some unlucky student’s lunchbox.  Grown-ups just didn’t get kids back then. 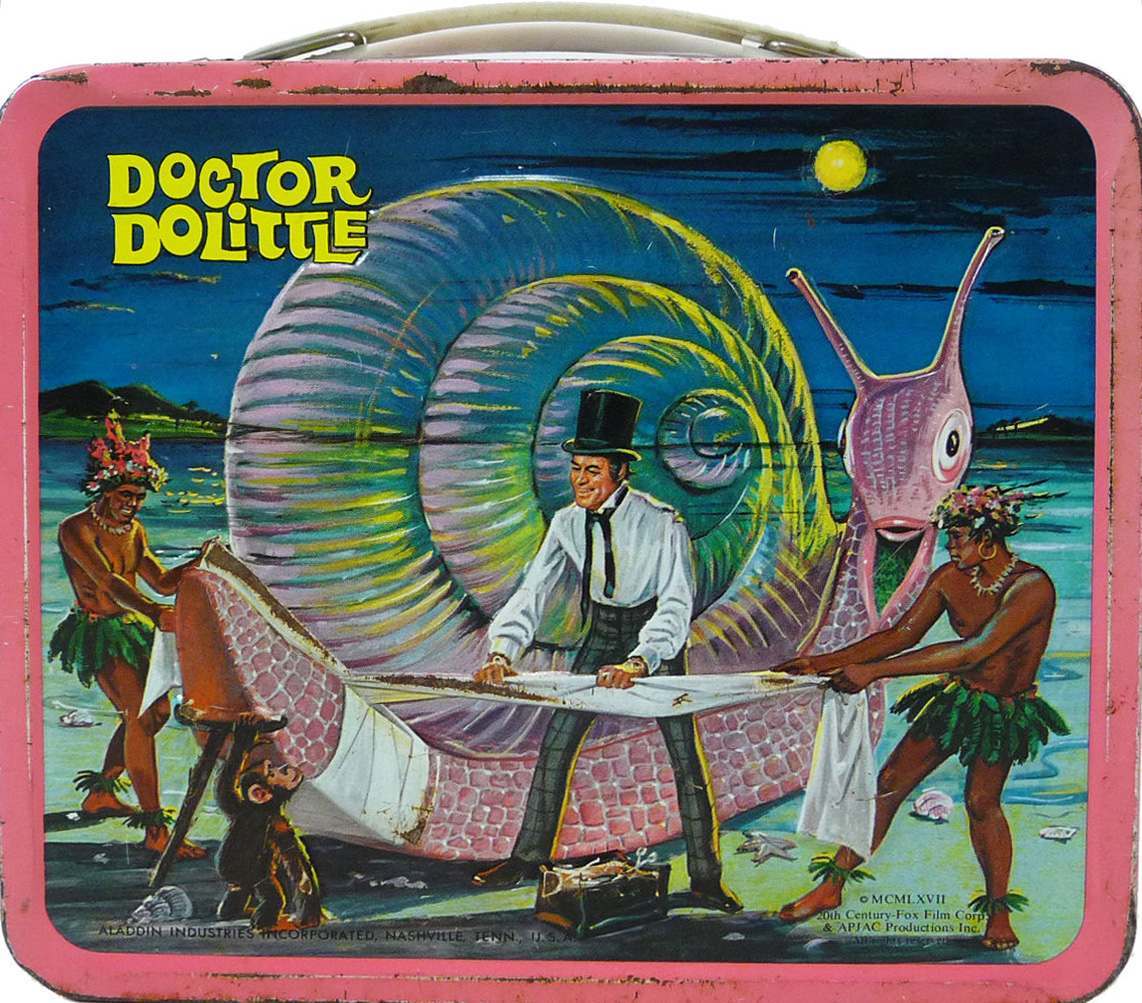 The giant pink sea snail scene is one of Hollywood legend – riddled with problems, and costing well beyond the film’s budget.  The depiction of Dolittle bandaging this giant mollusk with a couple natives easily earns the prize for most bizarre lunchbox fresco ever conceived. 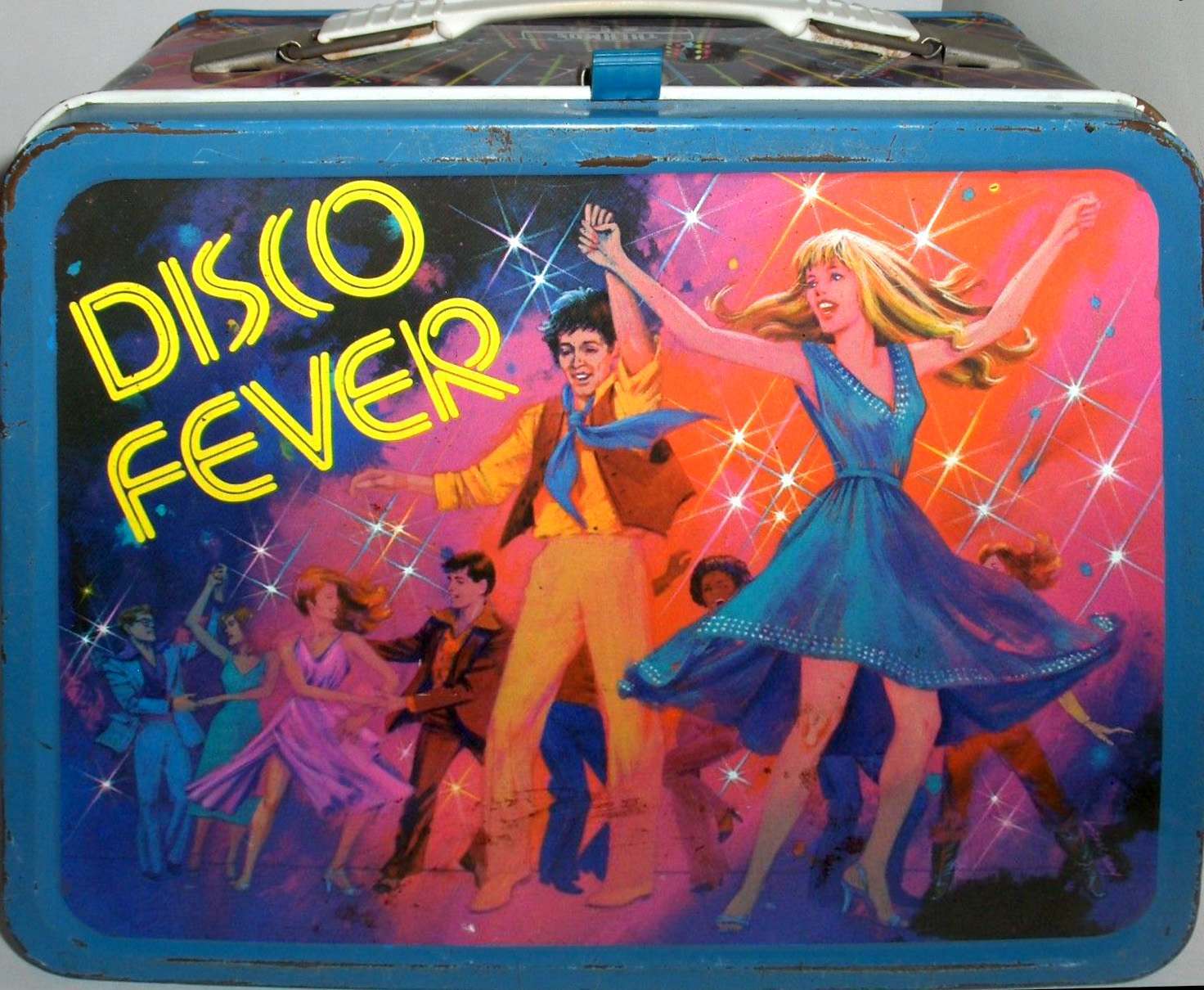 In the first lunchbox list, we brought you a generic “disco” lunchbox; this one appears to have kicked it up a notch.  Disco isn’t just a place your parents did lots of recreational drugs and had lots of consequence-free sex; it’s also a lunchbox theme. 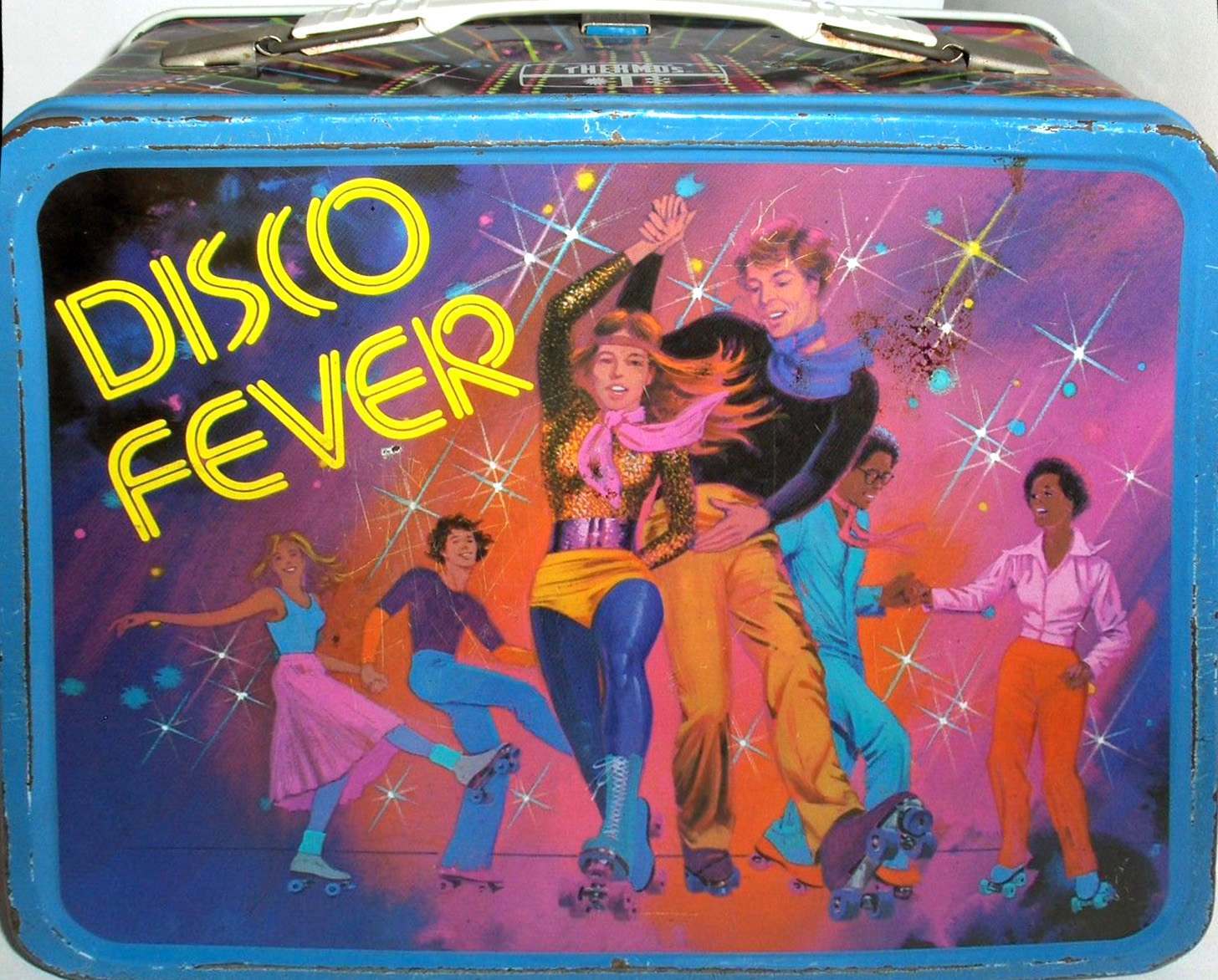 A roller disco lunchbox.  I hope mom packed an ice pack and lots of band-aids. 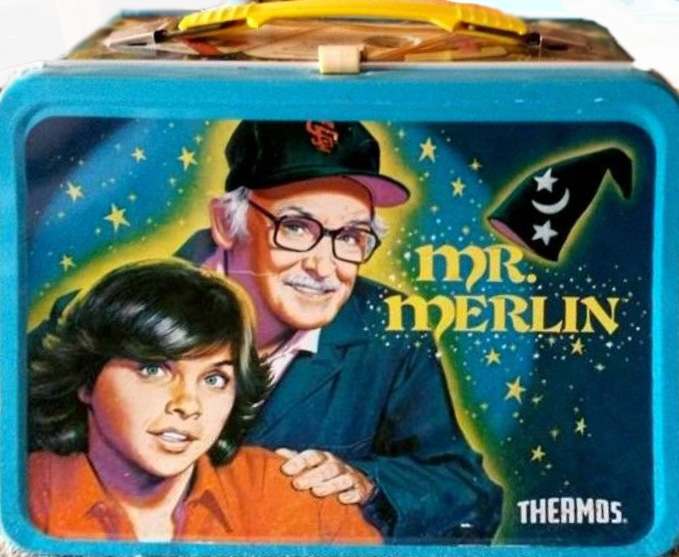 Aside from the fact that Mr. Merlin is a terrible theme for a lunchbox, the picture is just downright creepy.  Yet, not as troubling as the next… 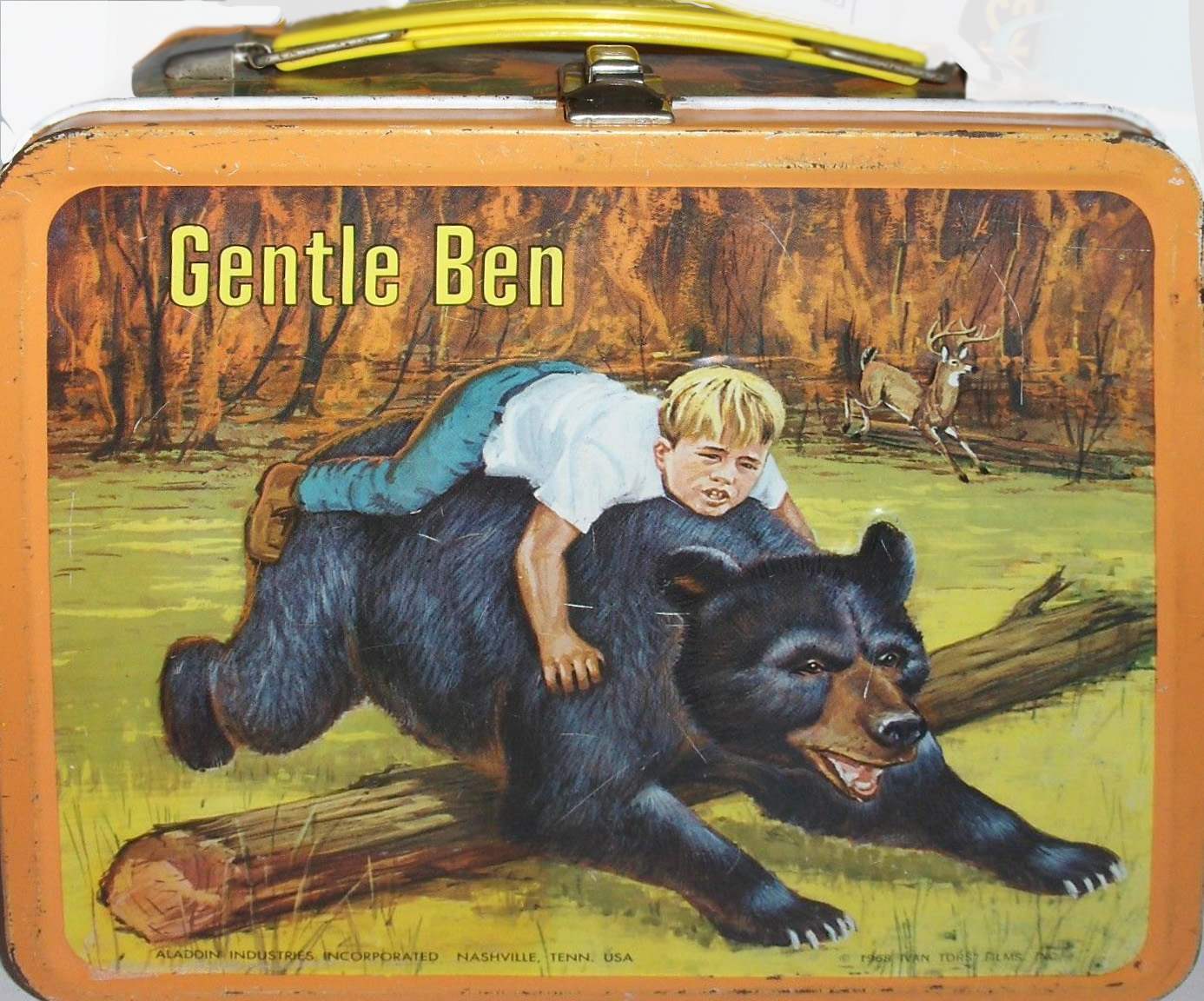 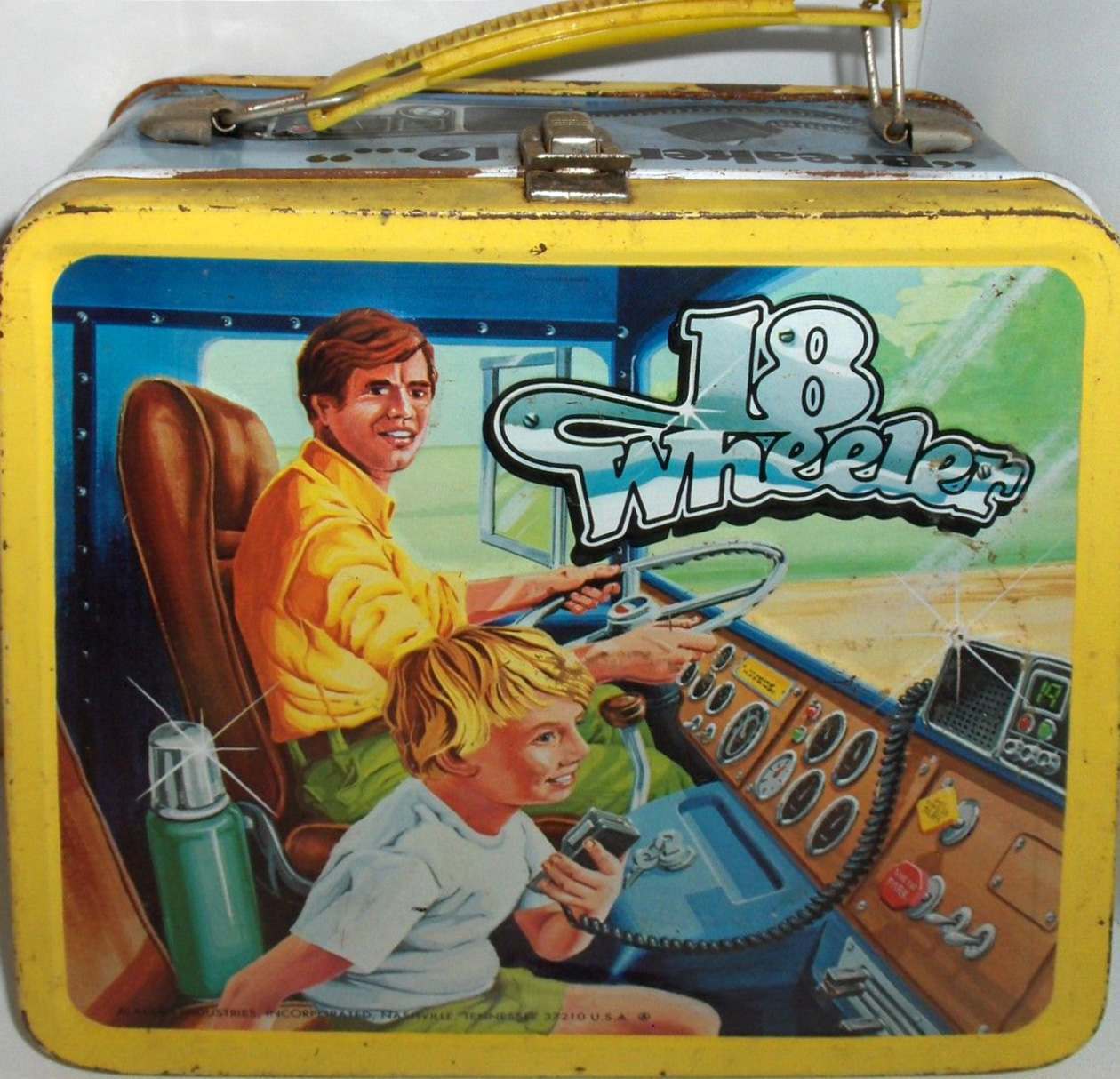 CB’s and trucking were uber-cool in the 1970s, and a worthy theme for a lunchbox.  Unfortunately, this one depicts a creepy guy driving the big rig – not exactly a childhood fantasy come to life. 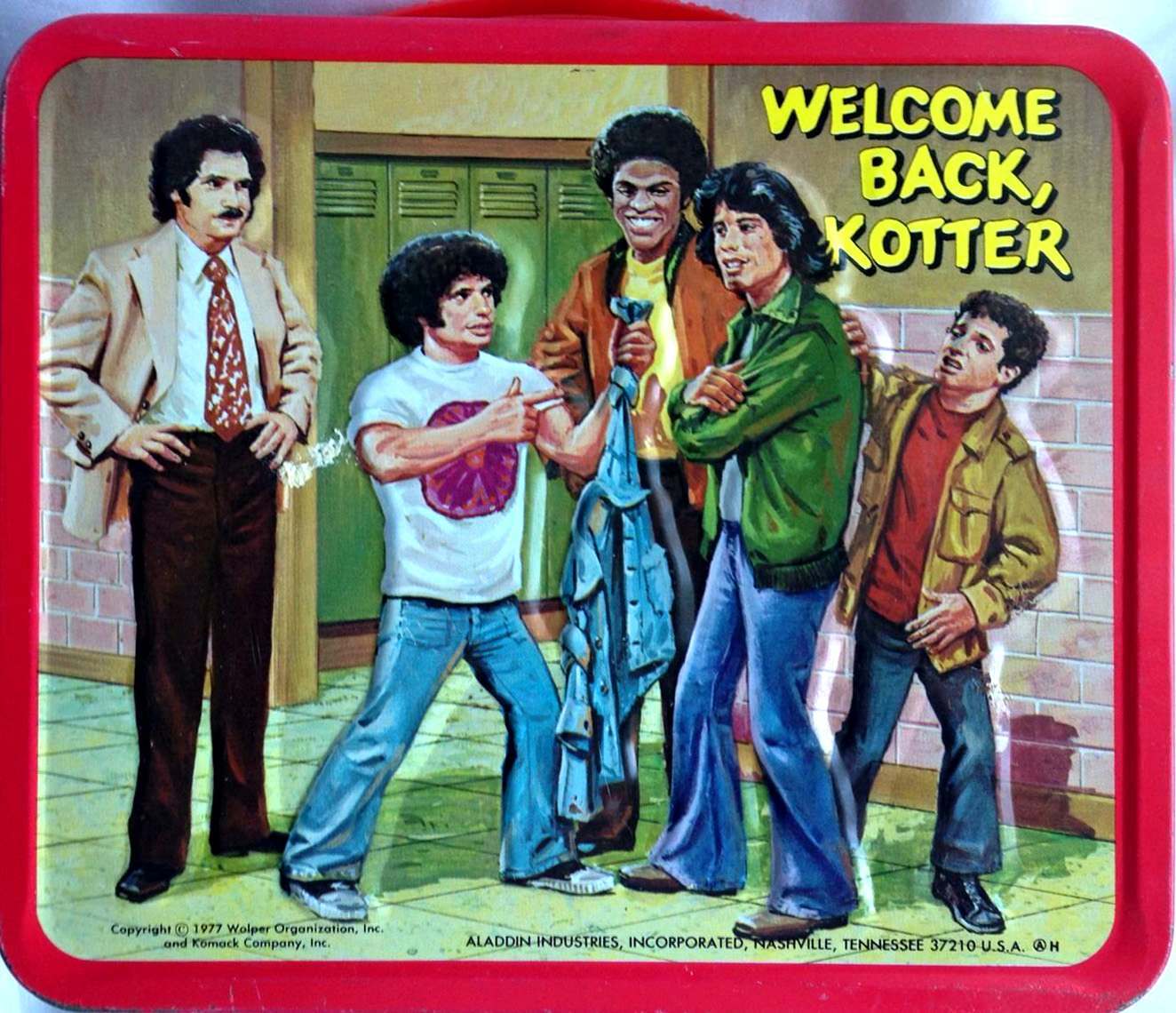 Juan accuses Barbarino of tying his denim jacket sleeves in knots…. quite an odd idea for a scene to depict on a lunchbox, don’t you think? 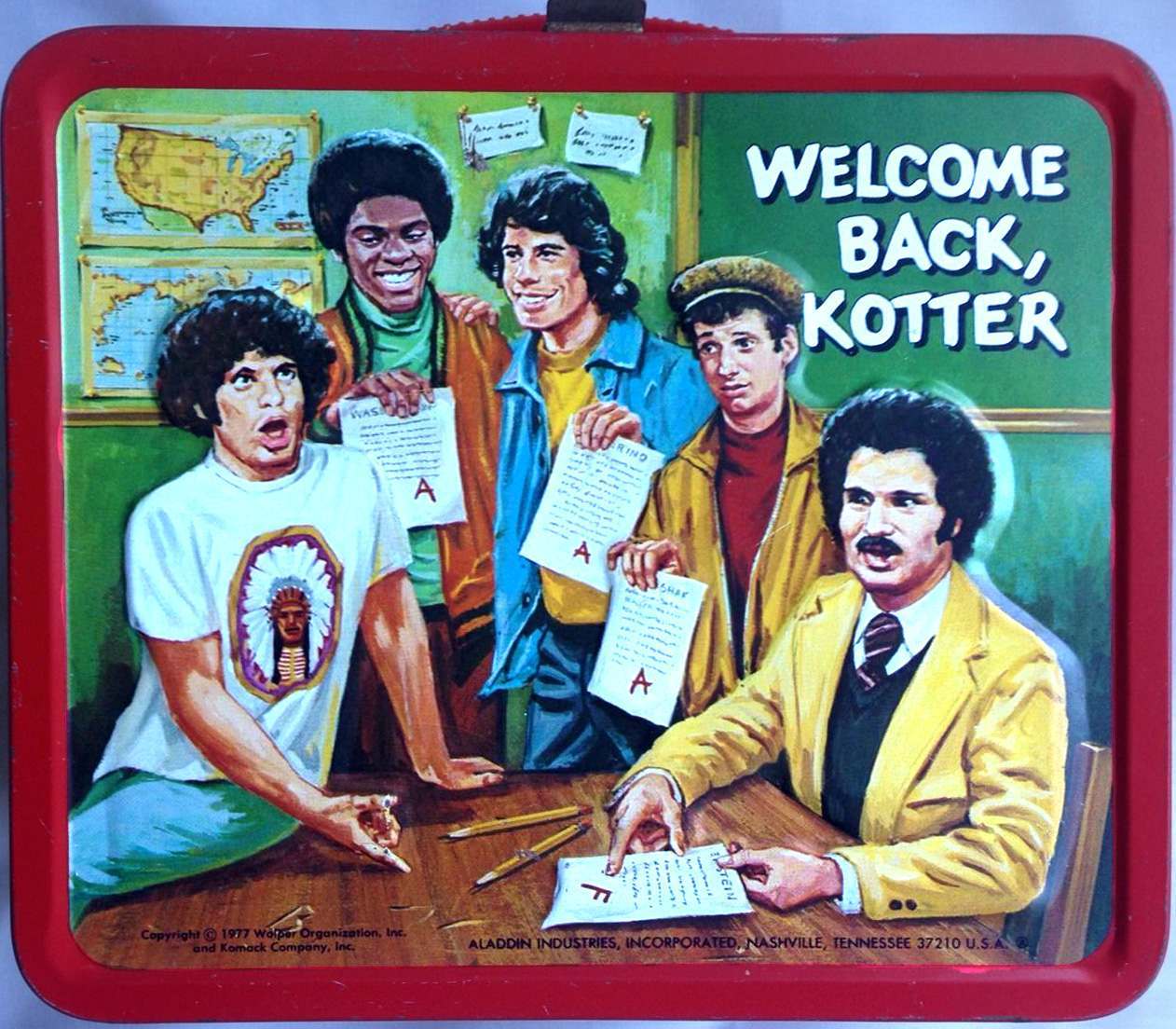 The never popular Juan is, again, the focal point – and here he is making a wildly inappropriate expression.  I understand he received a failing grade, but why would that elicit the “O” face? 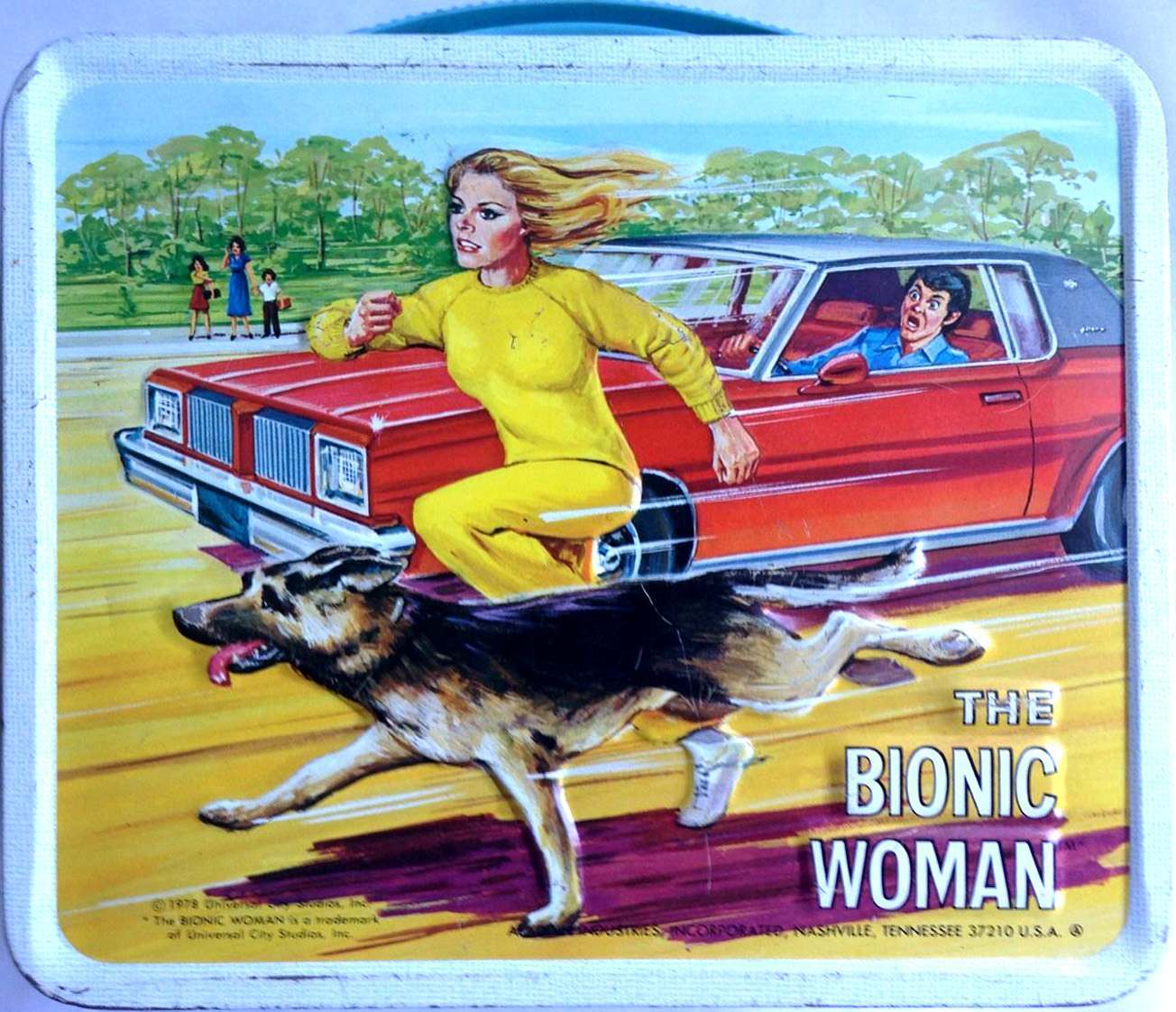 Check out the expression of the driver – I assume he’s freaking out over the Bionic Woman’s speed, but it also looks like he likes what he sees.  “Whooooweee! Foxy mama!”

I thought it’d be nice to end things with one last glance at our friends: the happy driver, orgasmic Juan, and the creepy trucker.  Until next time!