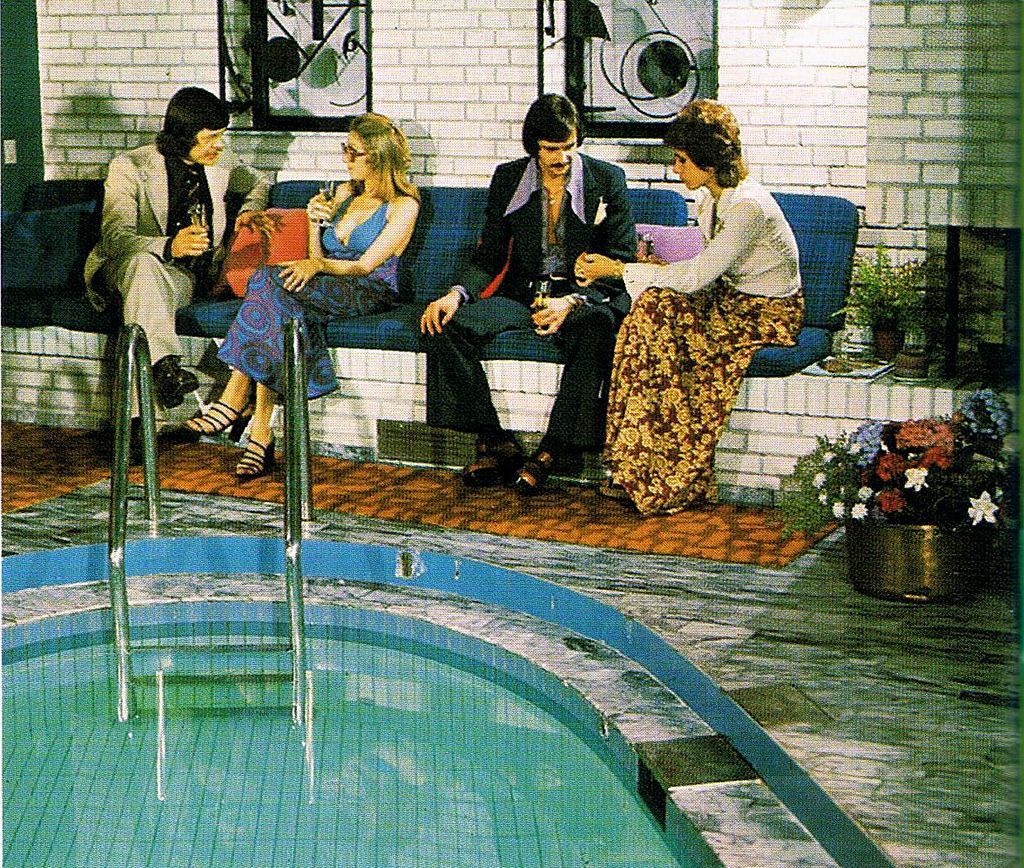 In 1968, Jacuzzi unleashed upon the world, the tub with jets. And in 1970 Family Size tubs hit the market…. but this new invention wasn’t used much for families.   I don’t need to tell you what you get when you add 70 million Baby Boomers hitting their sexual prime with the simultaneous unveiling of Jacuzzis that can fit more than one person.   Overnight, these bubbling buckets went from being a bathroom oddity to the location of choice for an entire generation to get their groove on.

HOT TUBS AND THE SEXUAL REVOLUTION 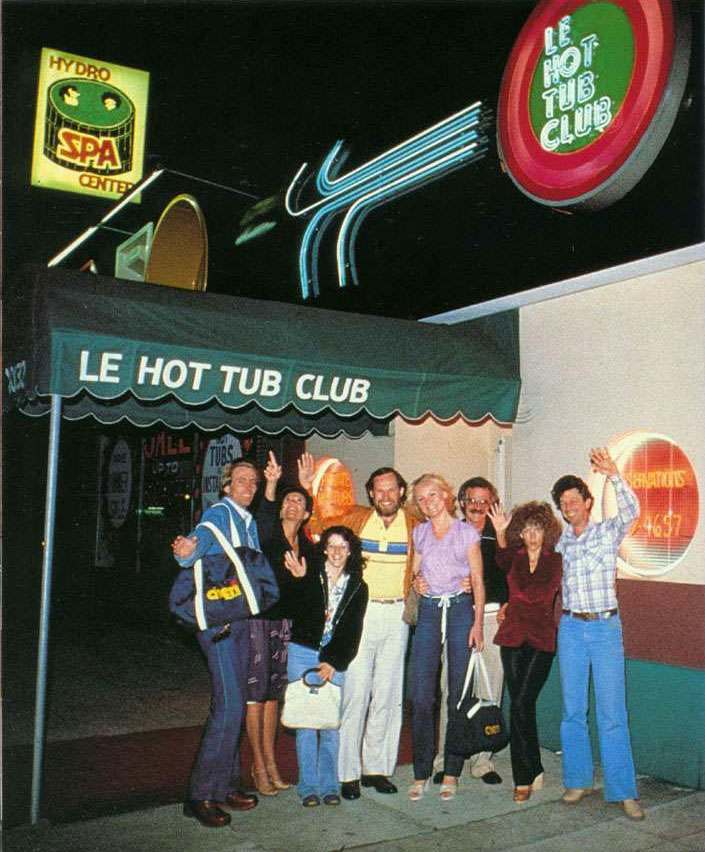 Yes, it was the Perfect Storm.  The durable family size hot tub hit the market at just the right time.  No longer were tubs small, fitting only one person.  Now, the sky was the limit to the number of friends and sexual partners you wanted to share bodily fluids with.

Plus, the earlier tubs were highly breakable and a pain in the ass. They often had a pump contraption that you had to hook up which was inconvenient and prone to problems.  The new hot tubs had the patented 1968 water jets, plus, they were made of durable fiberglass.  Now, it was easy and convenient…. and just in time for The Sexual Revolution.

Picture it: In a seedy club downtown, there’s a big hot tub, almost pool sized, with hundreds upon hundreds of men and women having sex in it, day in and day out.  One can only imagine what kinds of microorganisms were floating around in that giant Petri dish! 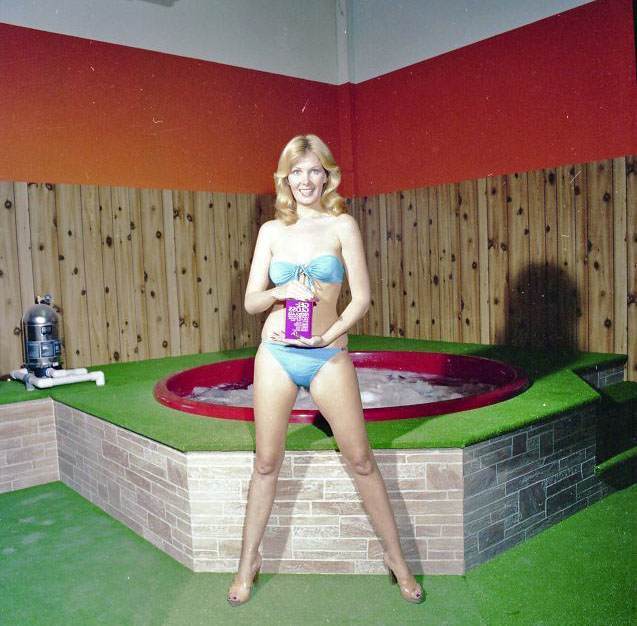 The hot tub phenomenon spread to the gay community and the “swingers” – it wasn’t long before bath houses became a regular feature in larger cities.  Of particular note was New York City’s Plato’s Retreat. 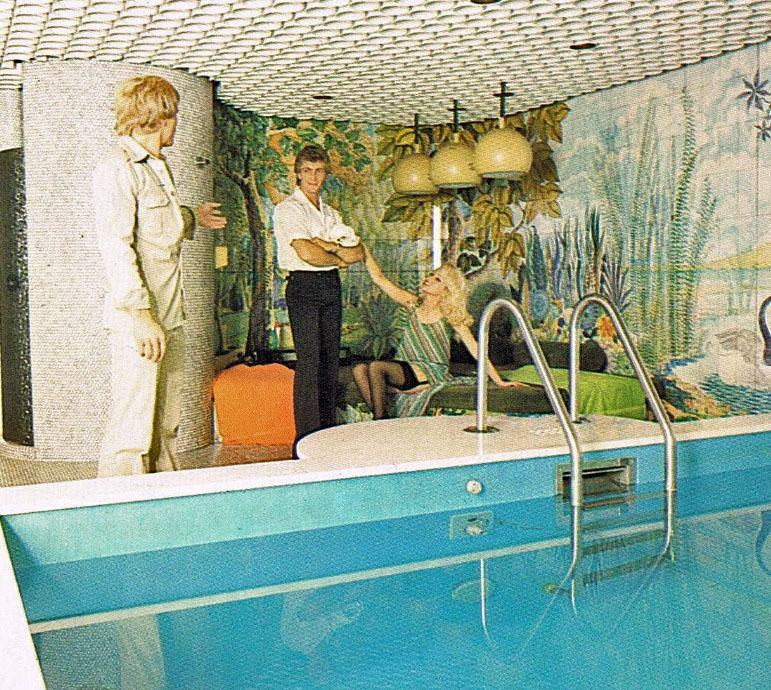 Bottom line, these hot tubs basically became breeding grounds for Chlamydia, Trichomoniasis, and Gonorrhea.  But no matter.  Soon Hollywood got on the hot tub bandwagon…. 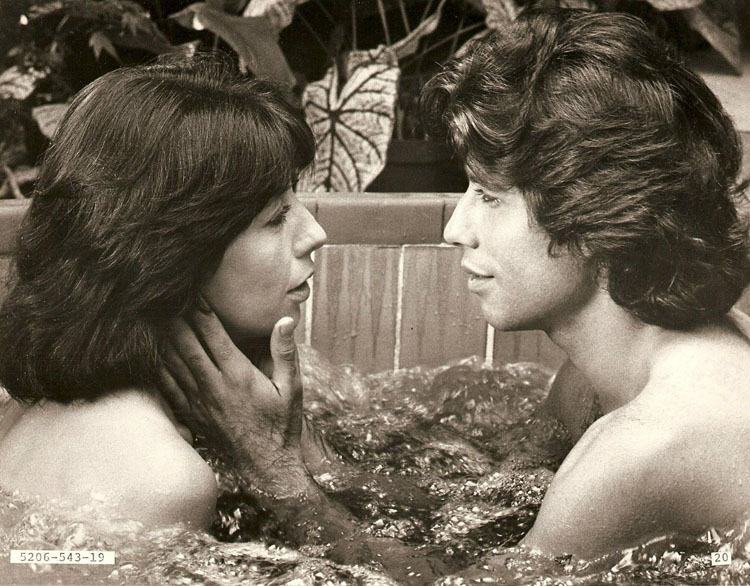 After the amazing successes of Grease and Saturday Night Fever, John Travolta followed it up with the epic box office bomb Moment by Moment (1978).  In the film, Travolta has a steamy romance with Lily Tomlin (who was actually fooling around with the female director in real life). In a controversial  scene, Tomlin bares it all in a hot tub. 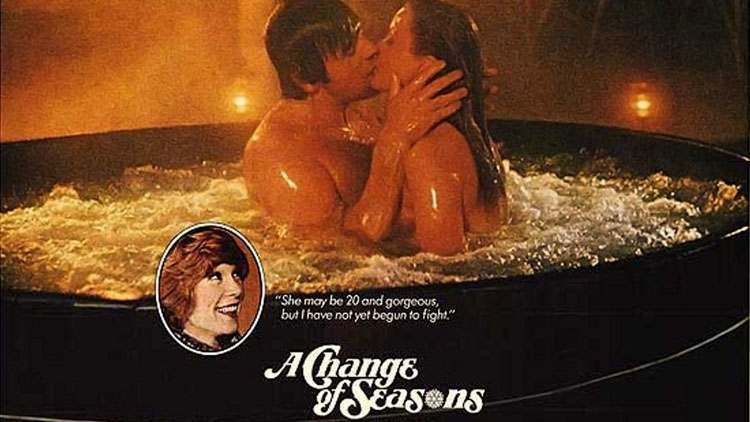 Then there is A Change of Seasons (1980) with Anthony Hopkins and Shirley MacLaine having mid-life crises and Bo Derek jumping around naked in slo-mo in a hot tub.  Truly a historic moment in Hot Tub Cinema History. 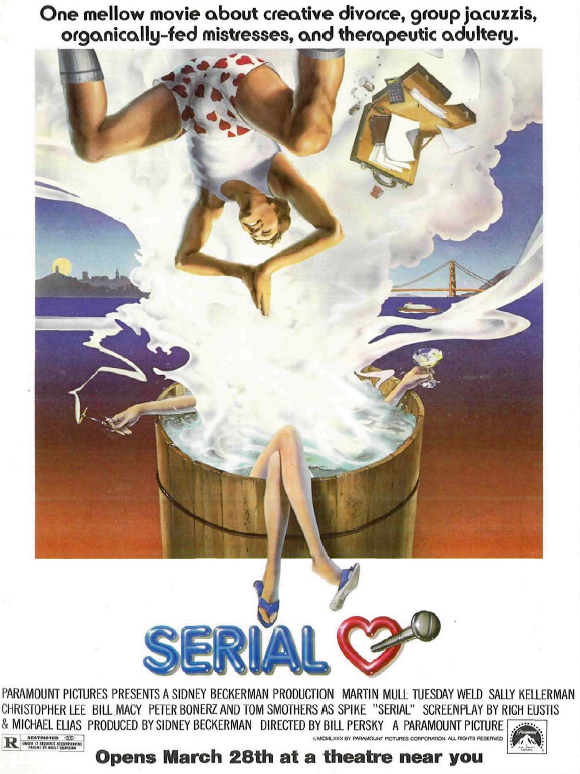 Other films worthy of mention:

Cheech & Chong’s Next Movie (1980) contains a hilarious hot tub moment.  Halloween II contains a rather unsettling kill scene in a medical hot bub.  Madman (1982) has a hot tub scene that is so gratuitous it has to be seen to be believed.  Also, Serial Love (1980) and Hollywood Hot Tubs (1984)… and in 2010, Hot Tub Time Machine.

And finally, a rather obscure hot tub pop culture artifact: The historically bad TV show Pink Lady and Jeff.  Those unfortunate enough to remember it may recall that it ended each episode with Pink Lady dragging Jeff fully clothed into a hot tub. It was obviously a flimsy excuse to have the two women in bikinis, but became absolutely awkward and cringeworthy.

HOT TUBS FOR EVERYONE 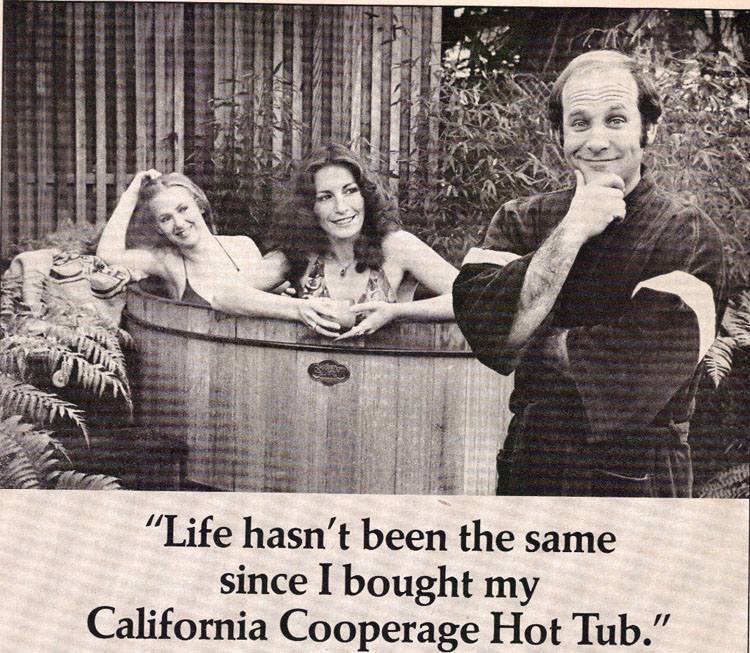 As this 1979 advert makes abundantly clear – if you are a red-blooded American male, it is in your extreme best interest to get a hot tub ASAP.  Cost be damned – your sex life depends on it!

If that wasn’t clear enough, here is an excerpt from Build Your Own Hot Tub (1976): 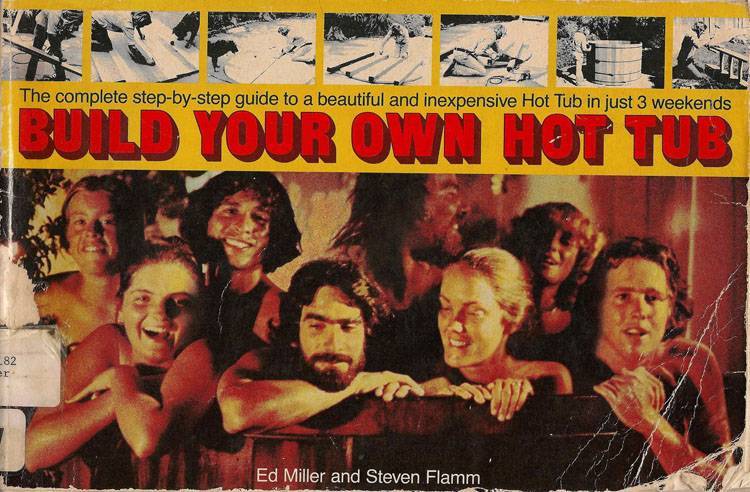 “When people get comfortable and relaxed, nice things happen… The hot tub is an environment of pleasure.  Alone and naked with your lover, experiencing the warm pulsations of hydrojet stream, definitely creates a warm sensuous setting for expressing your deepest and most intimate feelings.”

Okay, you’ve convinced me.  Time to build my own hot tub… 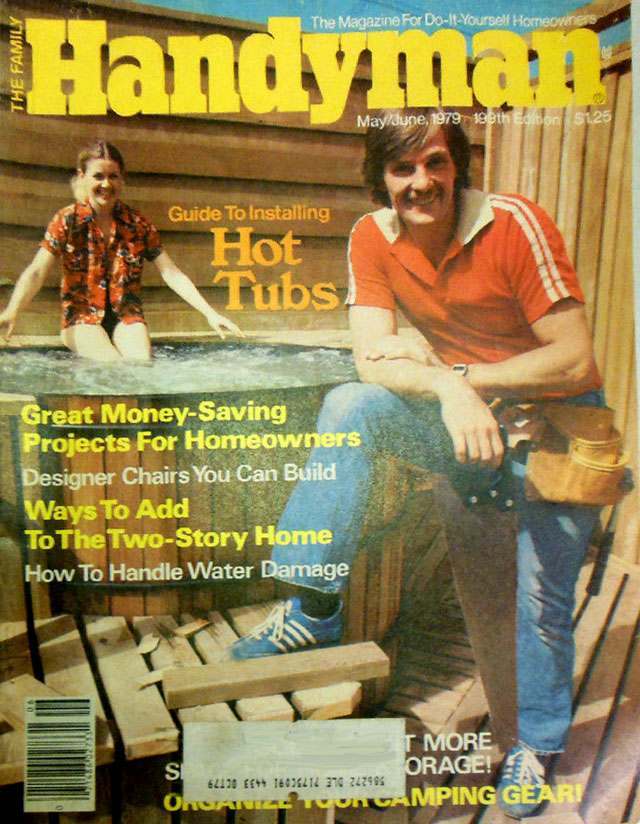 This 1970s male has much in store for his newly built hot tub.  Let’s hope it’s well chlorinated.

But then there were many who could neither afford a new hot tub and didn’t have the handyman skills to build it from scratch.  Option C is to just order an appliance from a catalog and convert your bathtub into a new bubbling sexual playground. 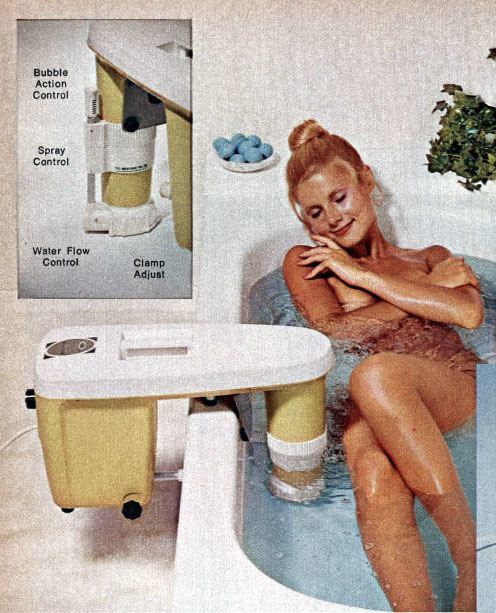 Of course, bathtubs were small back then (we didn’t have the so-called “garden tubs” of today); so having more than one occupant was often a difficulty.

If you had the dough, sexual adventurers could get creative, and the sky was the limit in hot tub creations.

The picture below is perhaps the ultimate example in 1970s hot tub décor. 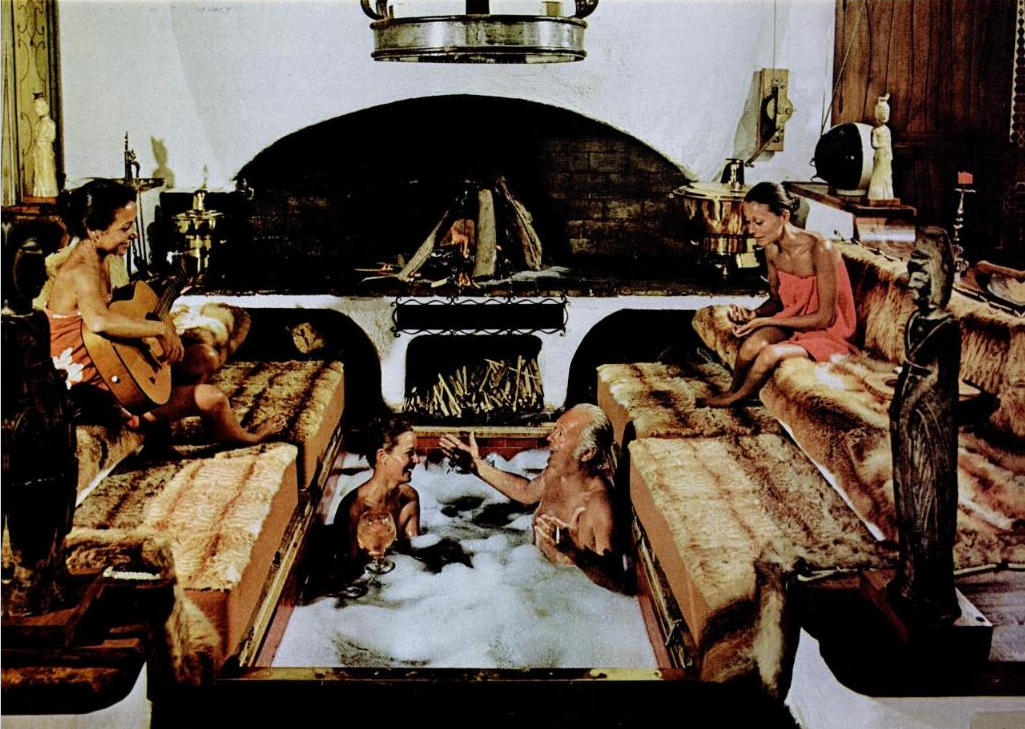 The bottom line: The hot tub is still with us; however, it’s heyday as sexual playground and STD habitat is over.  But it was fun while it lasted. 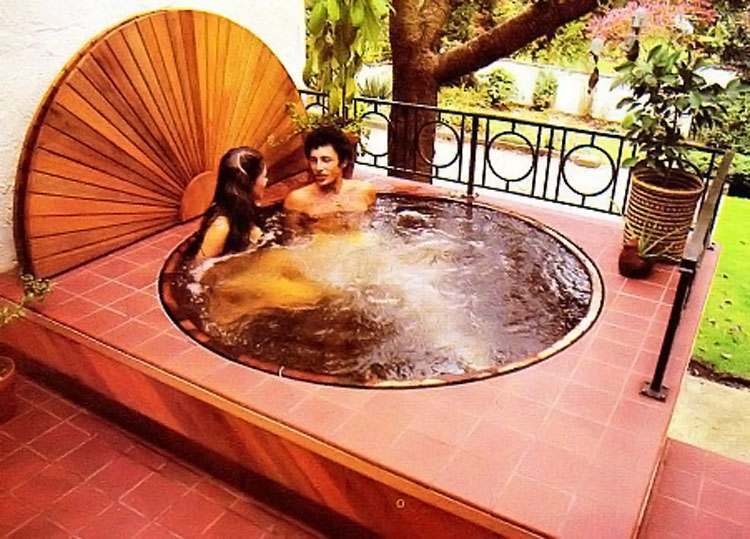