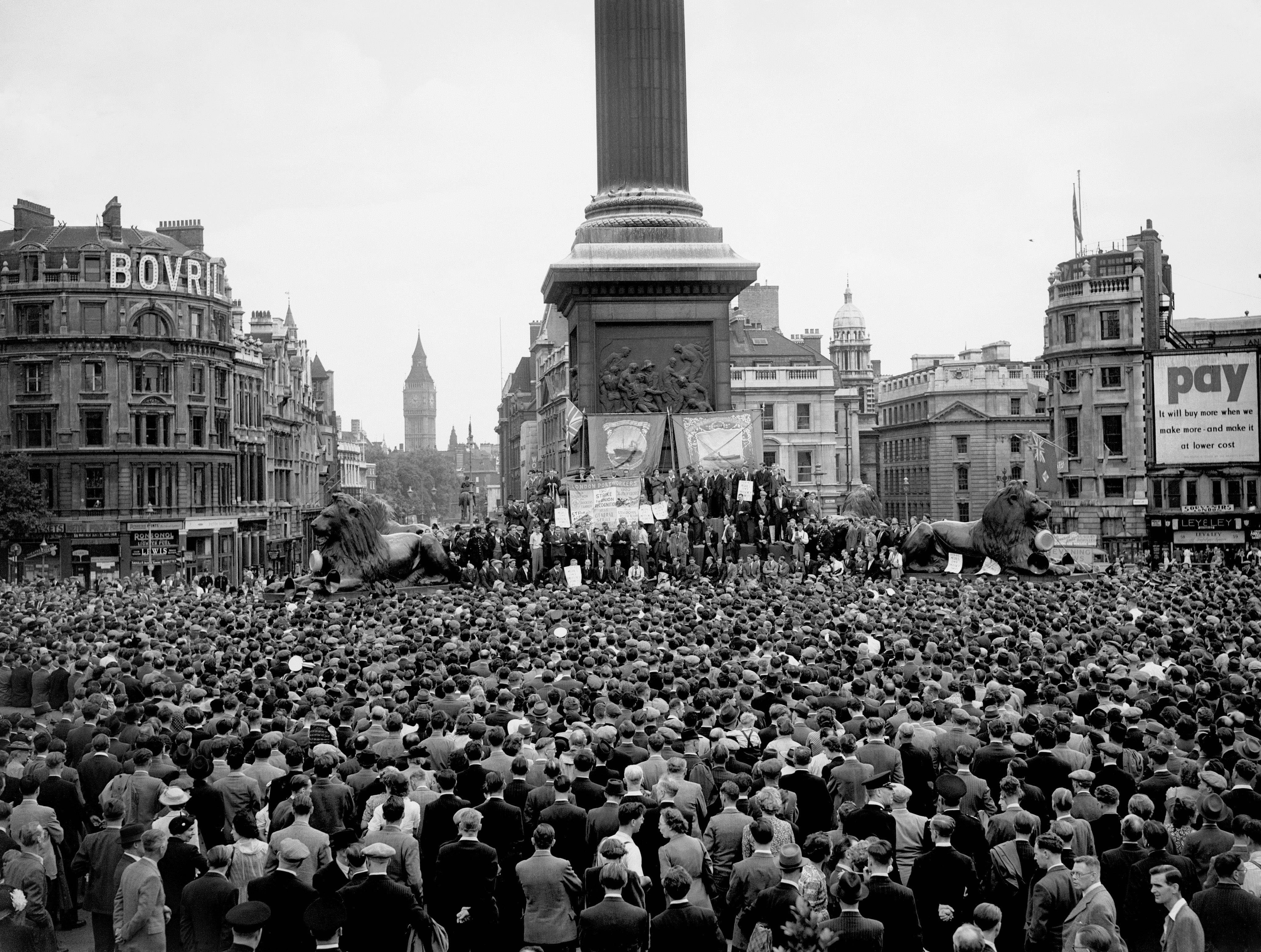 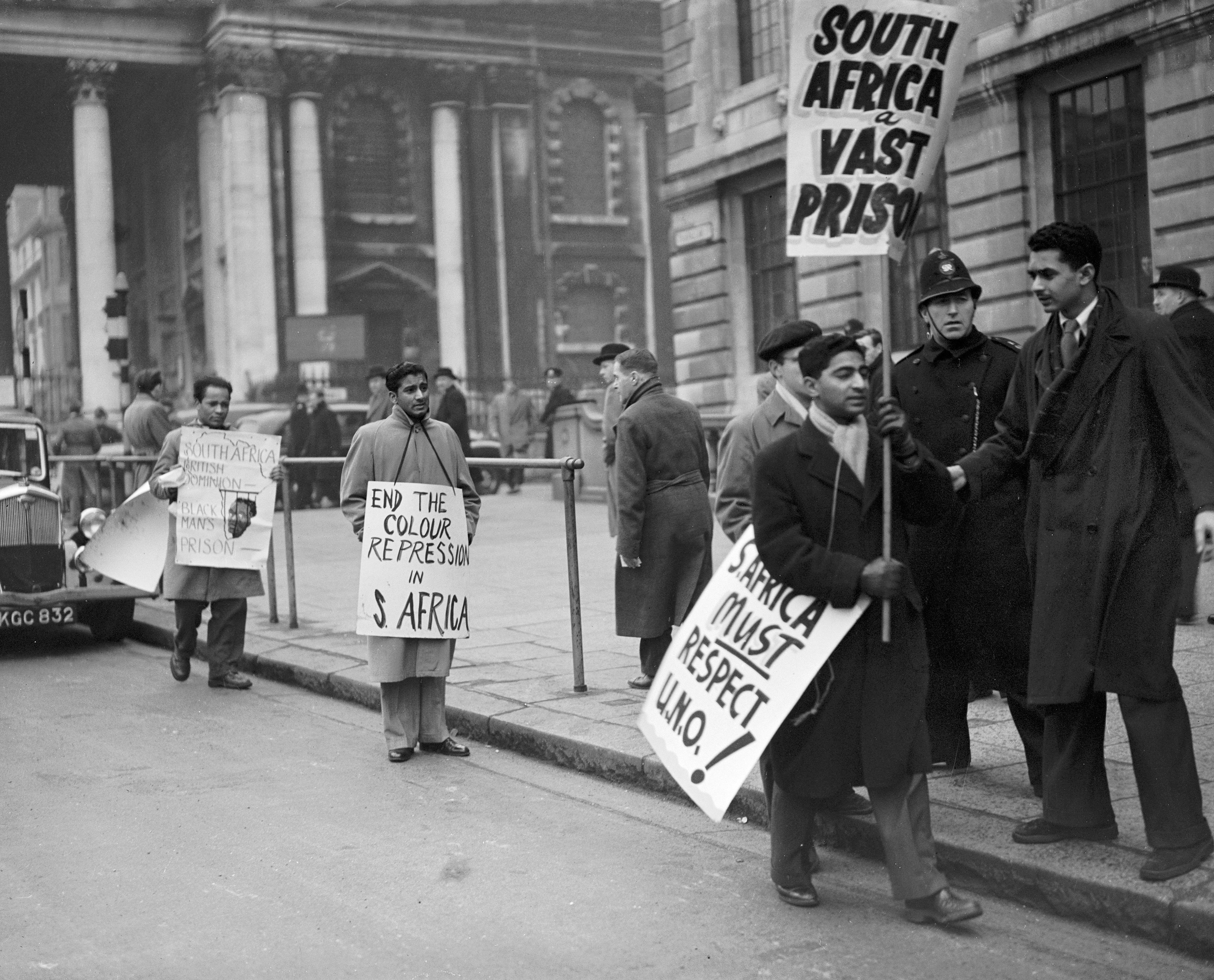 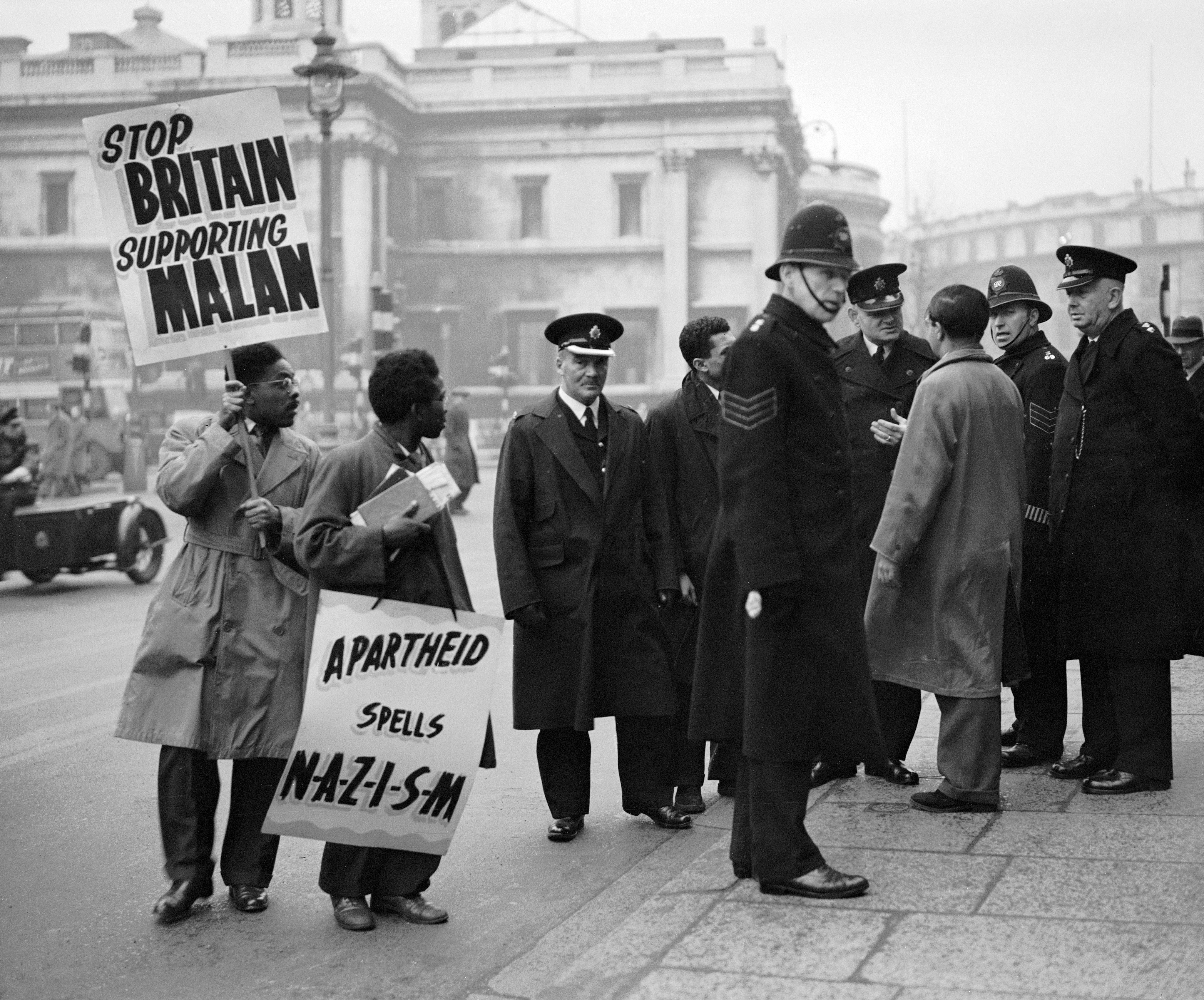 Another demonstration in Trafalgar Squre the following week. 19th Jan 1951.

A huge crowd, mostly women sheltered under their umbrellas in Trafalgar square, London on May 12, 1957, at a mass meeting of the national council for the abolition of nuclear weapon tests. The rally was organized as a womens protest march against H-bomb tests from Hyde Park to Trafalgar square. (AP Photo) 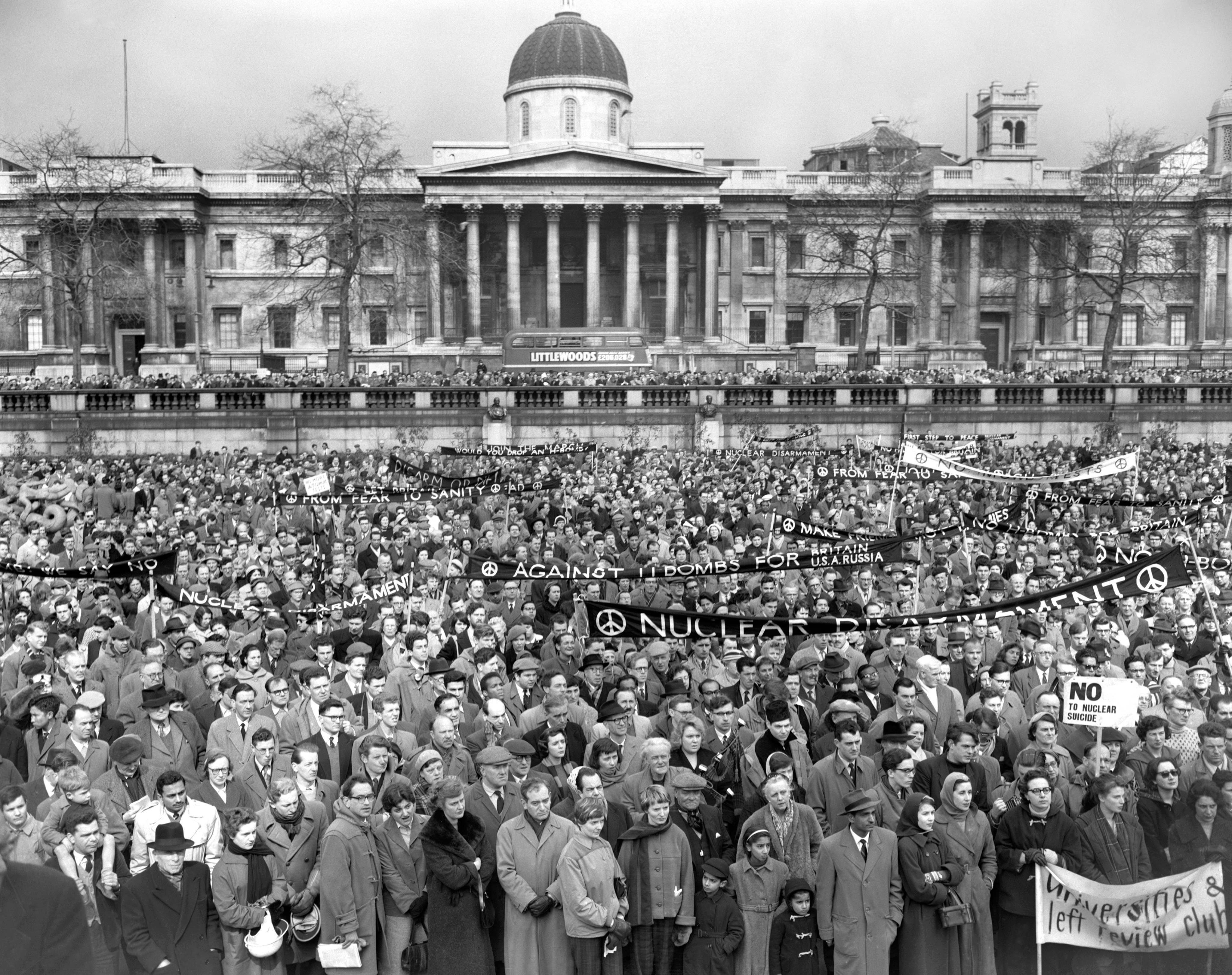 Anti-nuclear protestors gather in their thousands in Trafalgar Square for the start of the 50 mile protest march from London to the Atomic Weapons Research Establishment at Aldermaston in Berkshire. The Campaign for Nuclear Disarmament celebrates its fortieth anniversary. *09/04/04: Police warned of disruption and congestion along the route taken by thousands of people protesting against “the next generation of nuclear weapons” being developed in the UK – and blamed organisers for not co-operating fully with them. 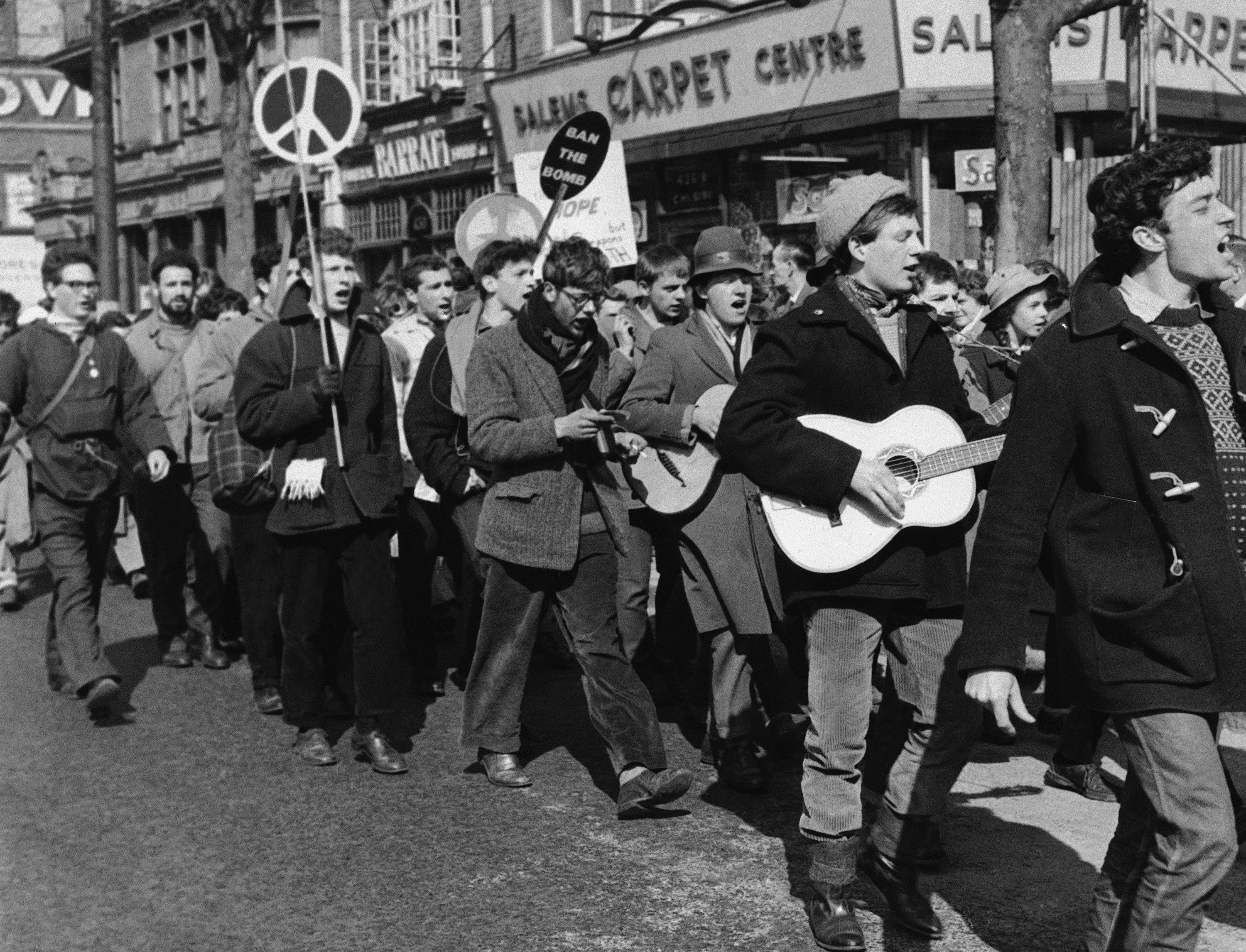 On April 18, 1960 a 20,000 strong procession of anti H bomb demonstrators protest against the manufacture of nuclear weapons. The procession is heading for Trafalgar Square London, where huge anti bomb rally is scheduled. (AP Photo) 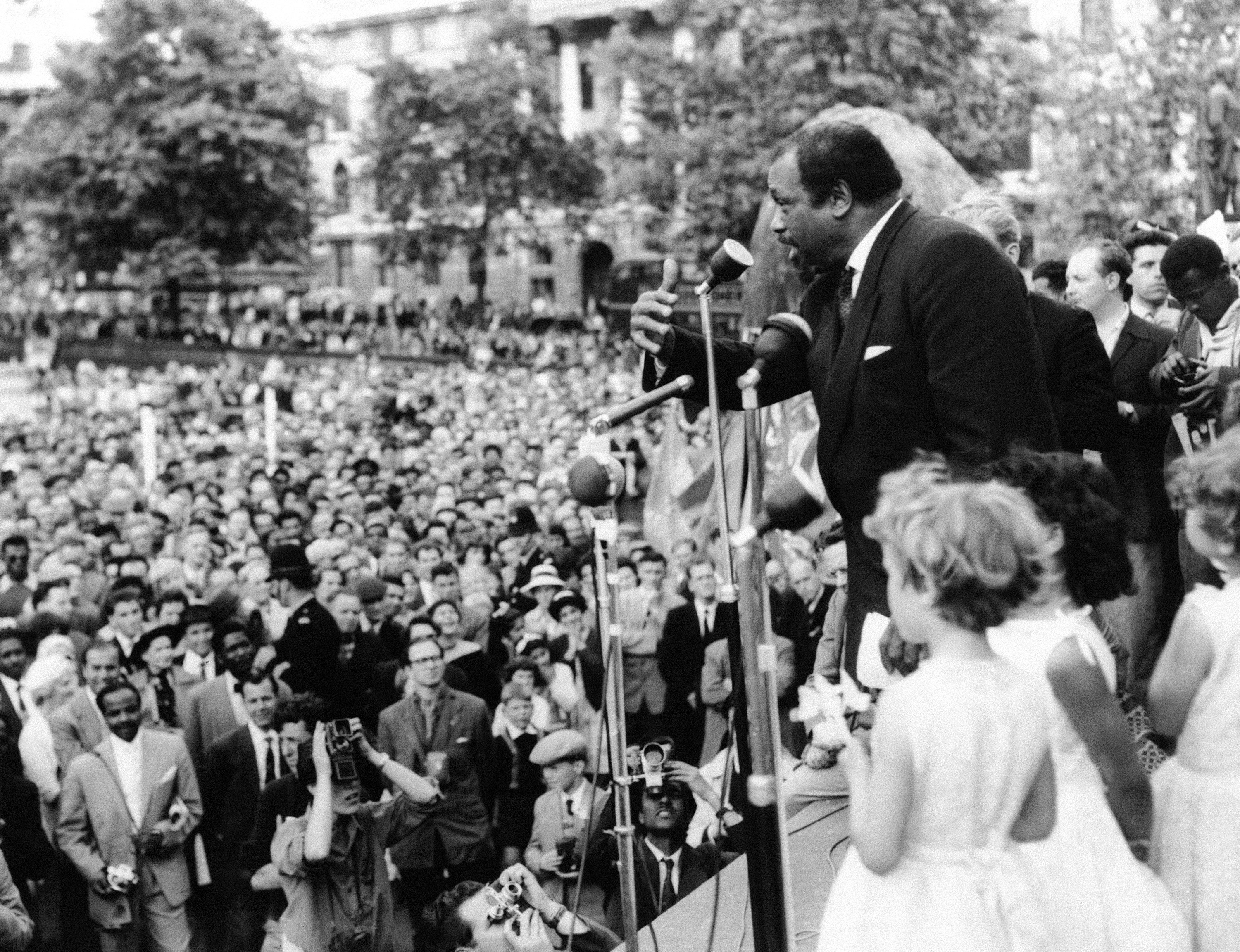 American baritone Paul Robeson speaks to crowd gathered in Trafalgar Square in London, June 28, 1959 to demonstrate against the H-bomb and nuclear weapons. Some 10,000 demonstrators marched to Trafalgar Square from Hyde Park for the rally. The procession was made up of groups and trade unionists and peace organizations and left-wing political groups. 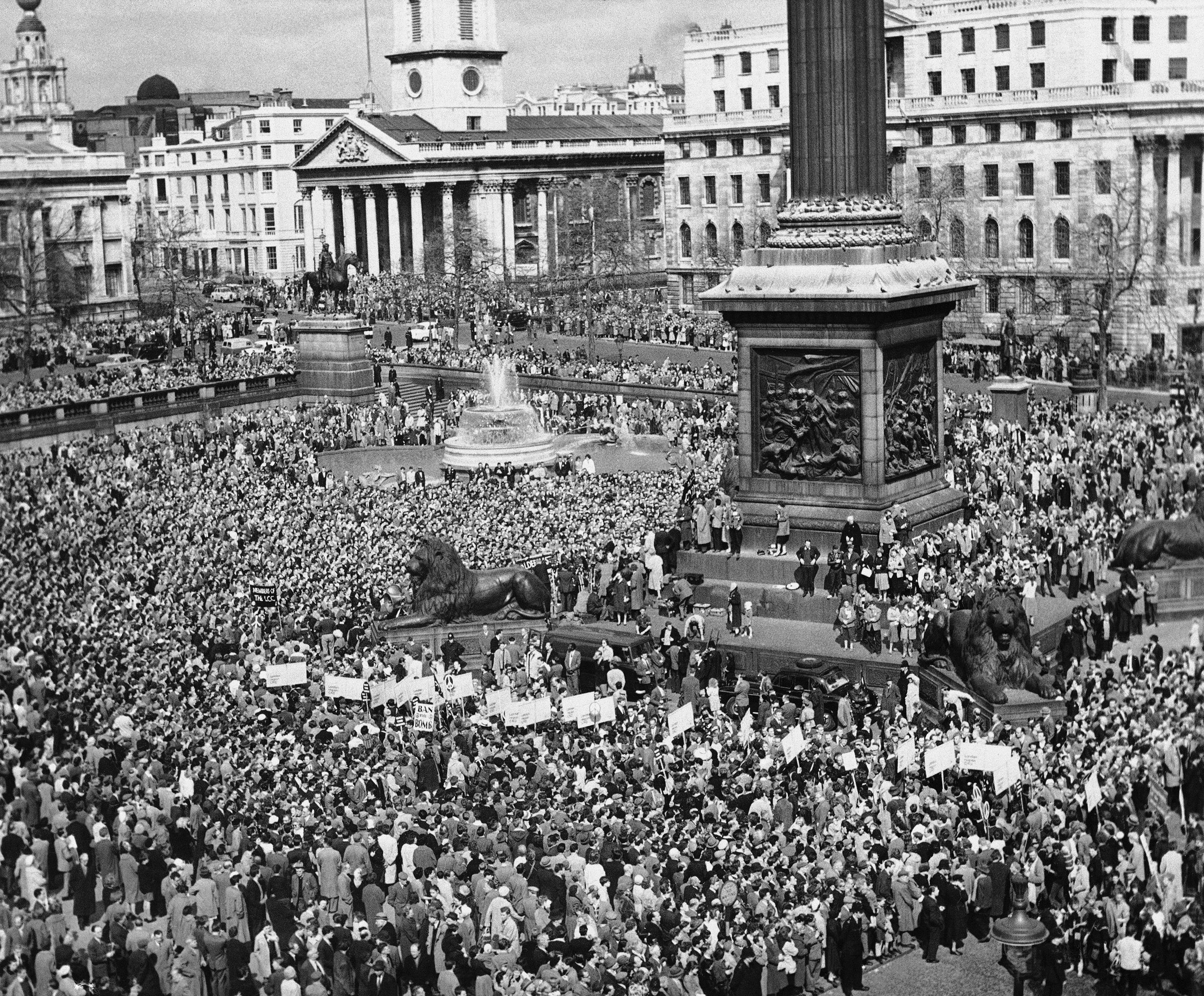 Nearly 70,000 persons pack in Trafalgar Square, London on April 18, 1960, in demonstration that climaxed four-day Ban the Bomb march from Aldermaston to the British capital. Aldermaston is British atomic research center. 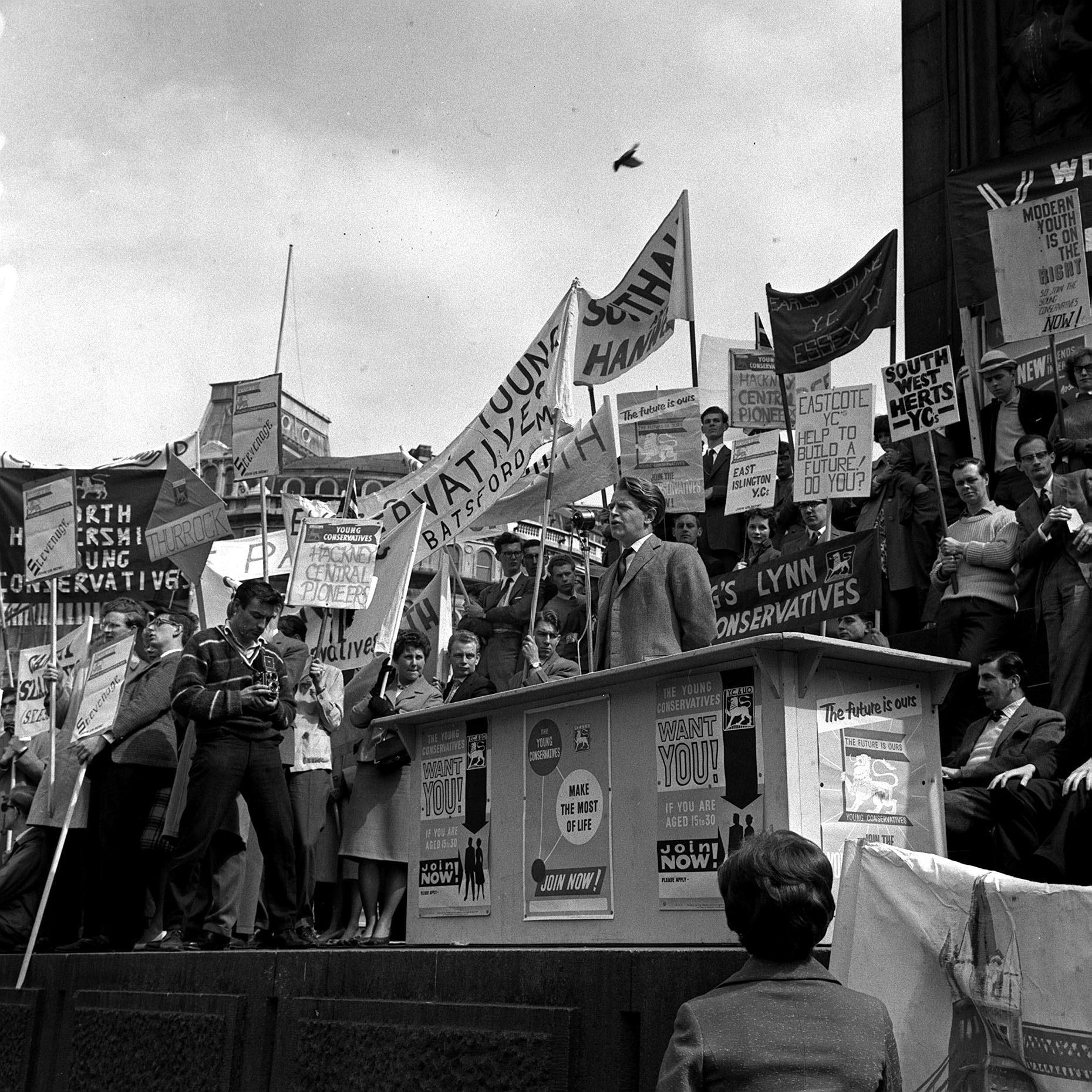 27th May, 1961: Surrounded by banners of every shape and size, Mr Christopher Chataway, Tory member of Parliament for North Lewisham, pictured when he spoke at a Young Conservatives rally in Trafalgar Square.

A well-dressed man is dragged away, head down, by police officers after sitting down during the huge Ban-the-bomb rally in Londons rain-soaked Trafalgar Square, United Kingdom on Sept. 17, 1961. Note shouting woman in right background. Hundreds of demonstrators sat down in the square as the crowd grew to well over 10,000. Several skirmishes broke out between demonstrators and the police and by 6.15 pm, 86 people had been arrested. (AP Photo/Robert Rider-Rider) 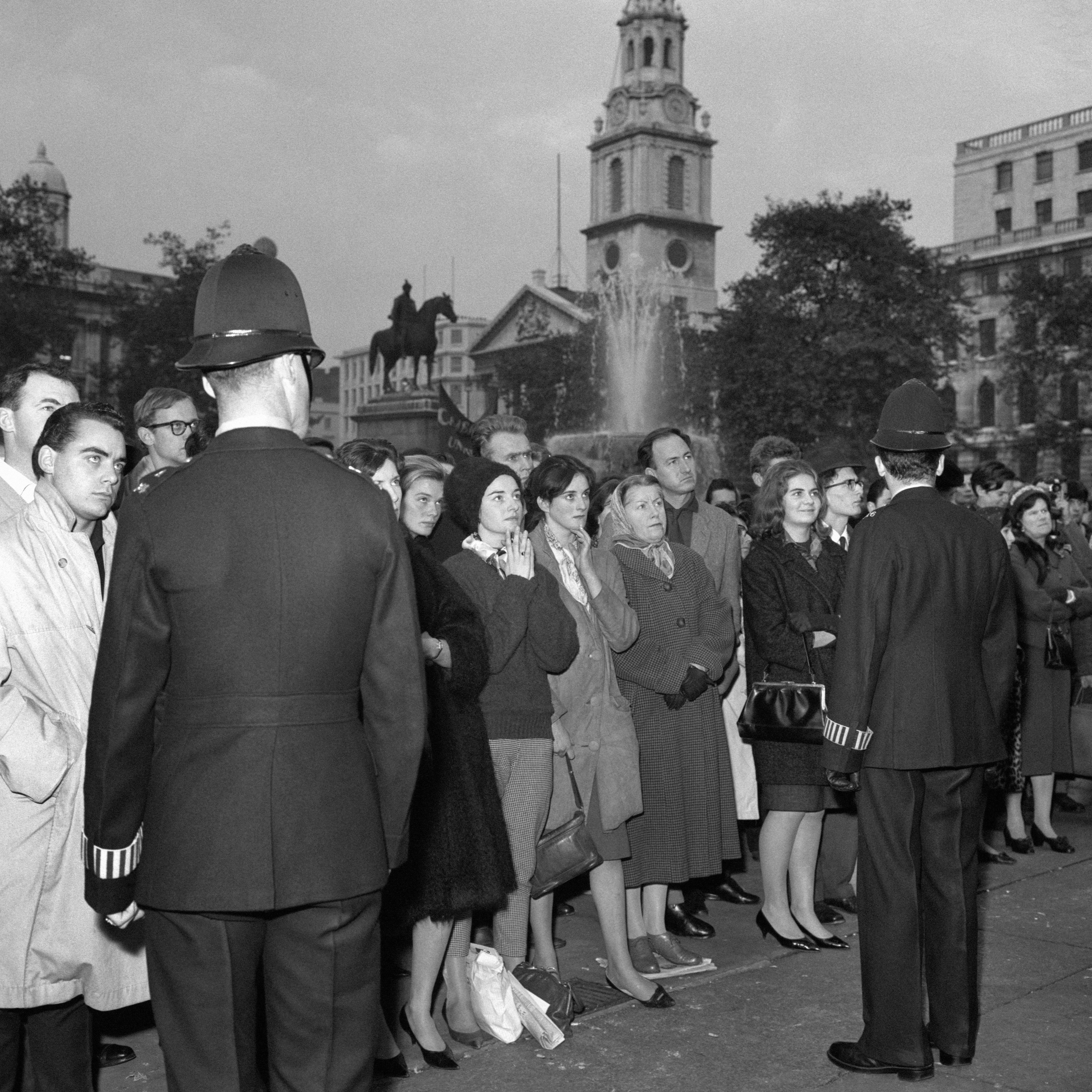 Police keep a respectful presence at the protest meeting in Trafalgar Square organised by the Committee of 100, 29th October 1961. 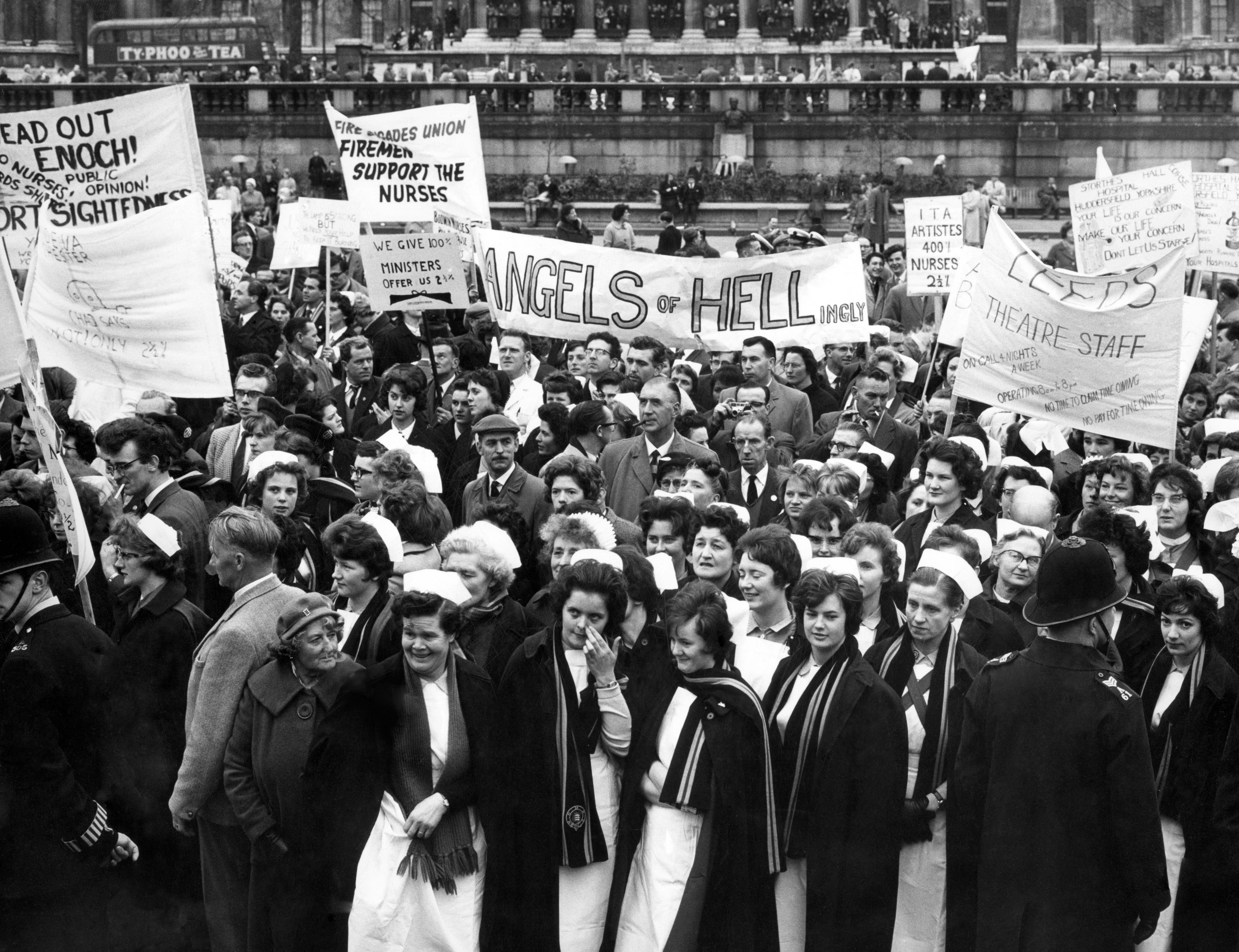 Nurses during a mass protest at pay rates. 28th April 1962 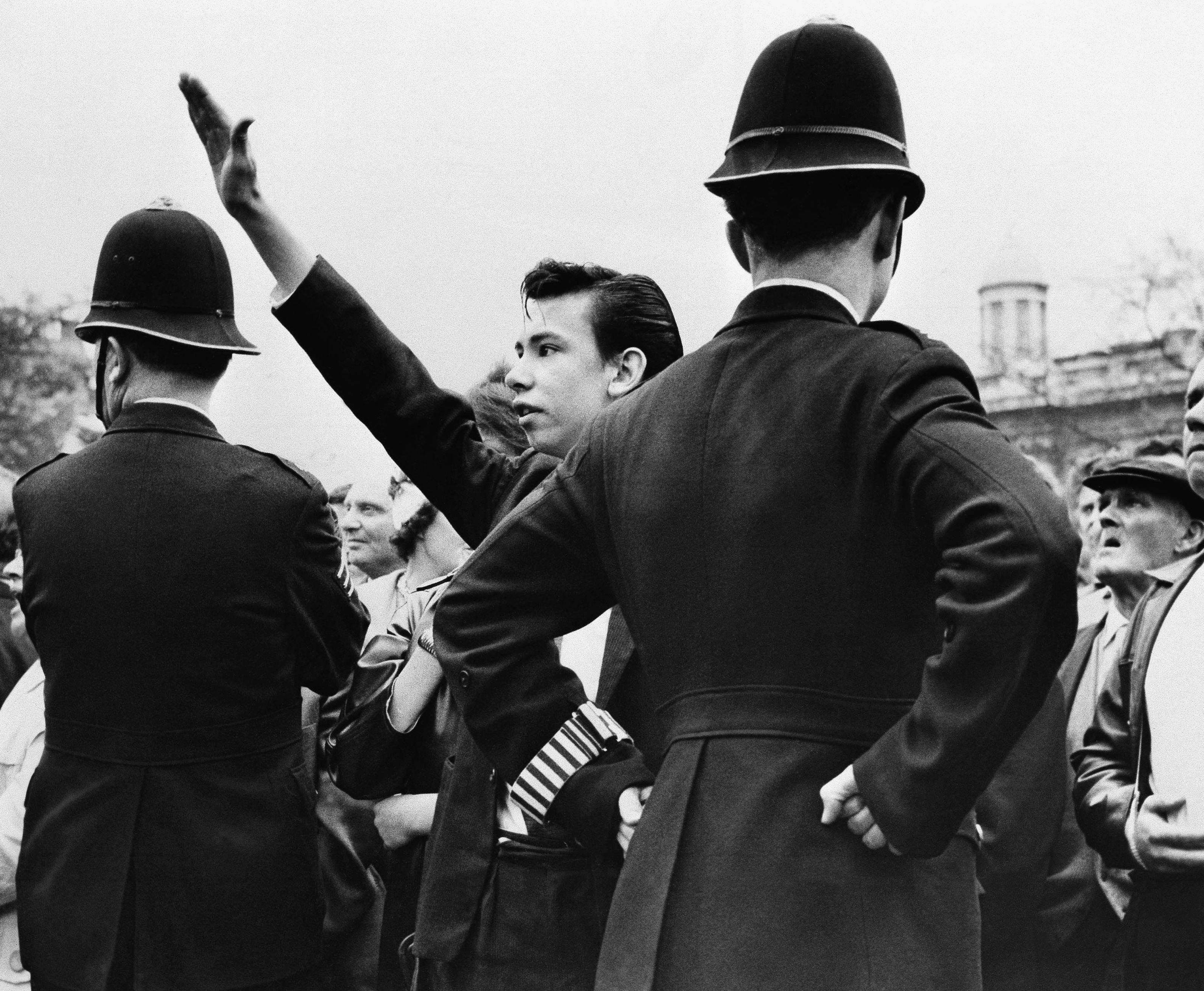 A member of the crowd gives a fascist-style salute as police stand by in case of trouble during the National Socialist Party rally in Trafalgar Square, London on July 1, 1962. (AP Photo/Robert Dear) 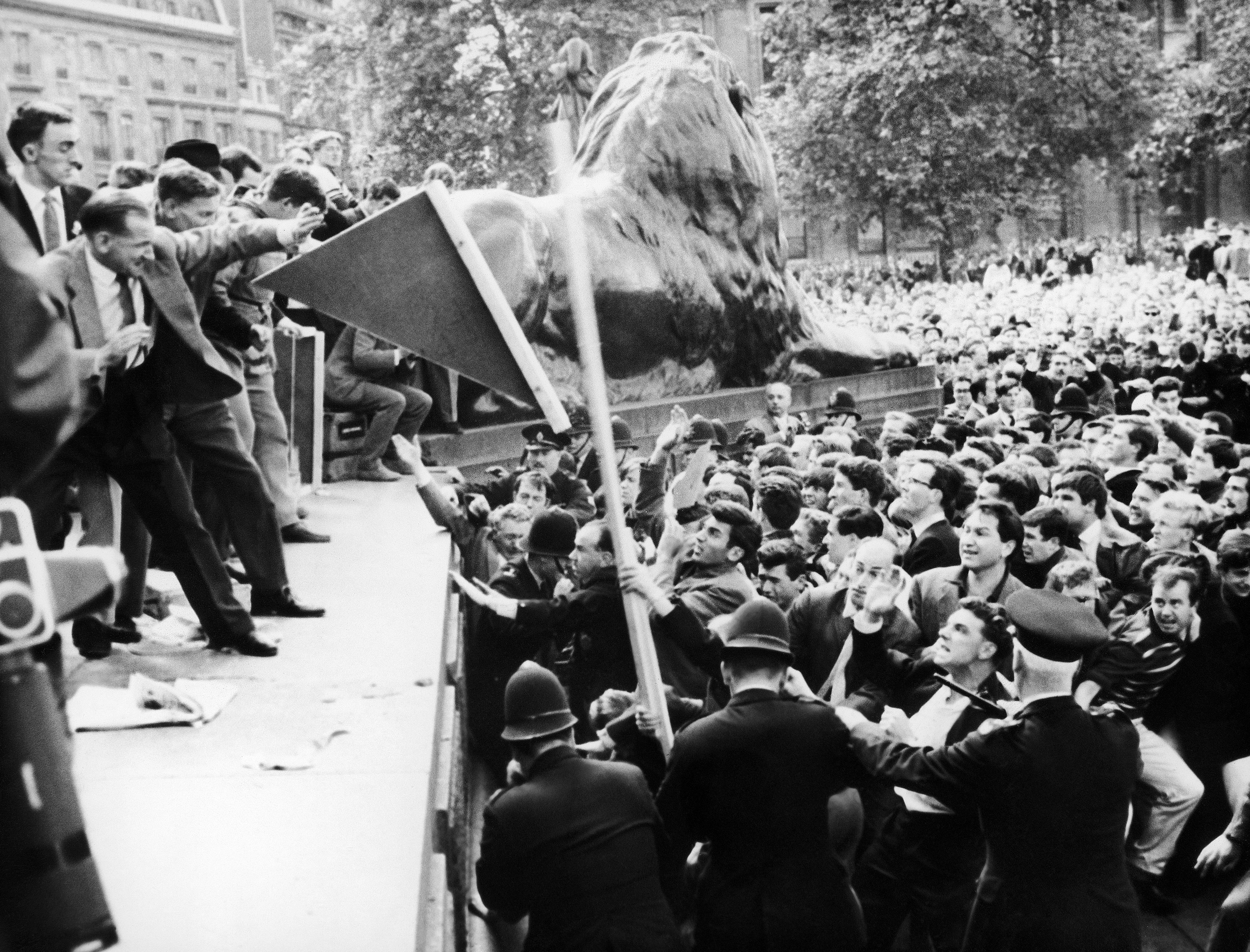 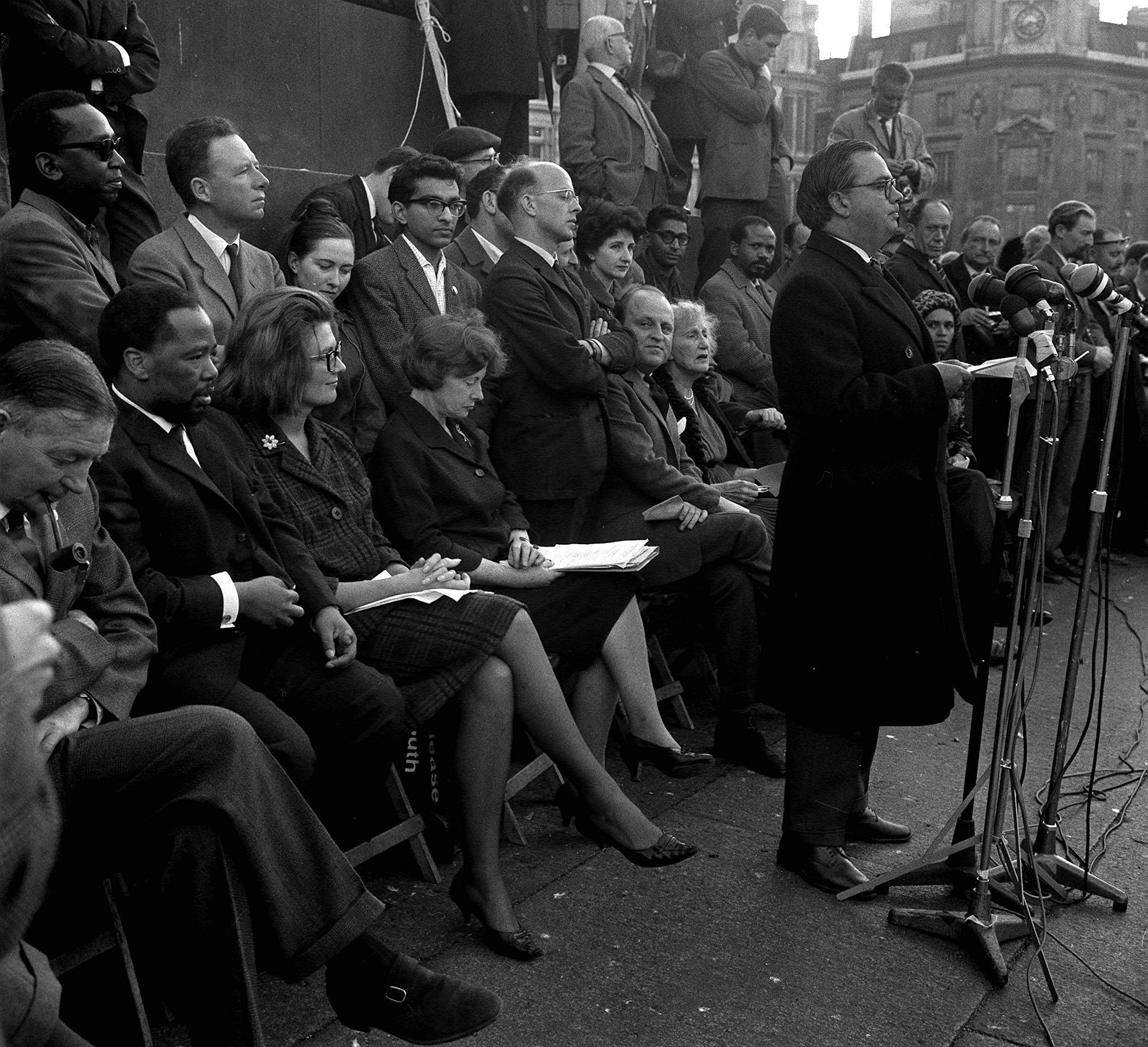 3/11/63 Woodrow Wyatt, Labour MP for Bosworth speaks from the plinth of Nelson’s Column during the anti-apartheid movement meeting at Trafalgar Square following a march from Hyde Park. 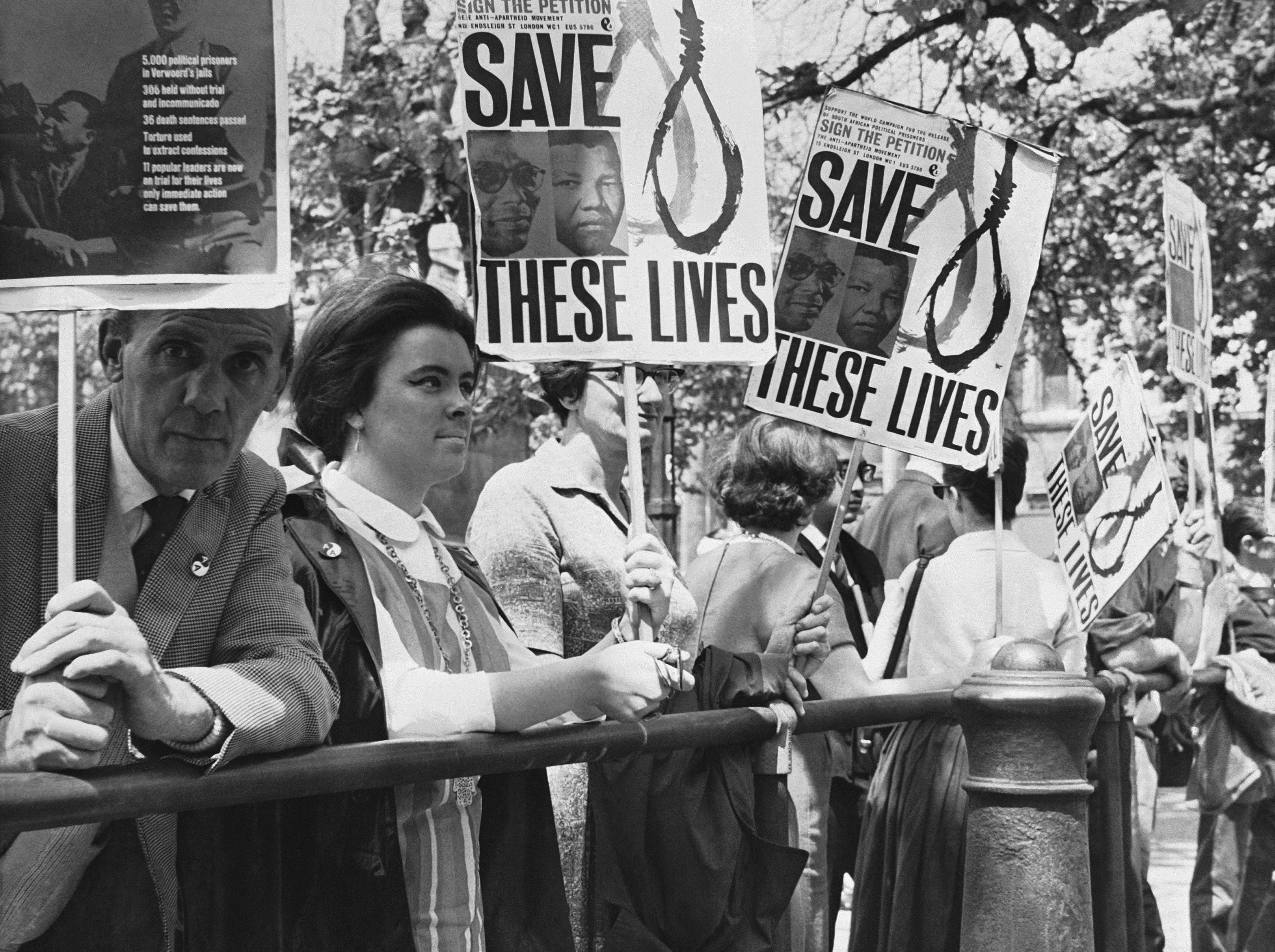 Anti-apartheid demonstrators gather outside the South African Embassy in Trafalgar Square, London, June 12, 1964, in protest against the sentence to life imprisonment of Nelson Mandela, former chief of the banned African National Congress. Mandela, 46, and seven other defendants were found guilty in the South African treason trial in Pretoria. They were sentenced today. 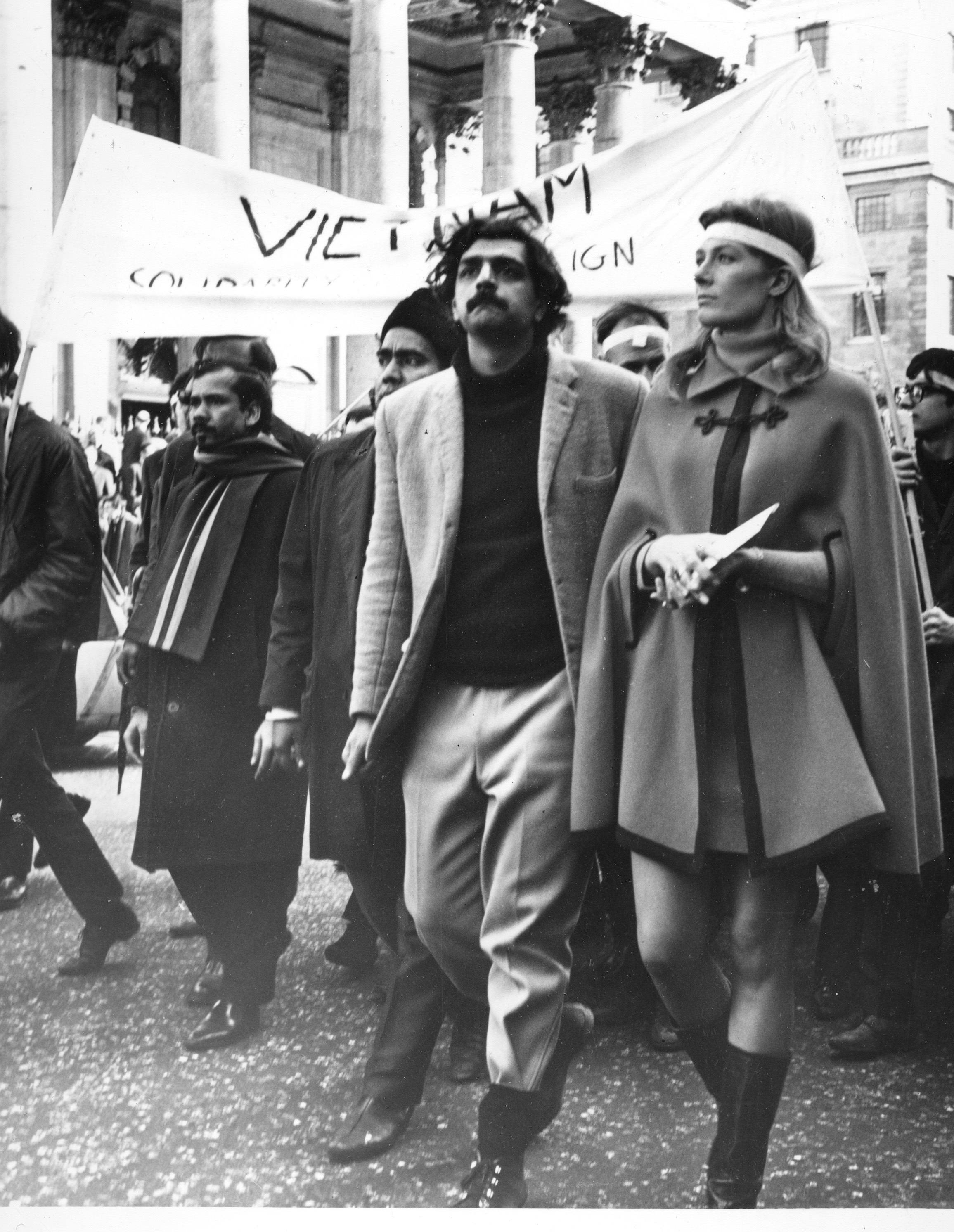 Actress Vanessa Redgrave, right, leads anti-Vietnam War demonstrators as they march towards the U.S. Embassy at Grosvenor Square after a massive rally in Trafalgar Square in London, England, on March 17, 1966. Redgrave holds a letter addressed to the U.S. Ambassador. The man next to her is Tariq Ali, a Pakistani citizen, who is chairman of the organizing committee for the protest. (AP Photo) 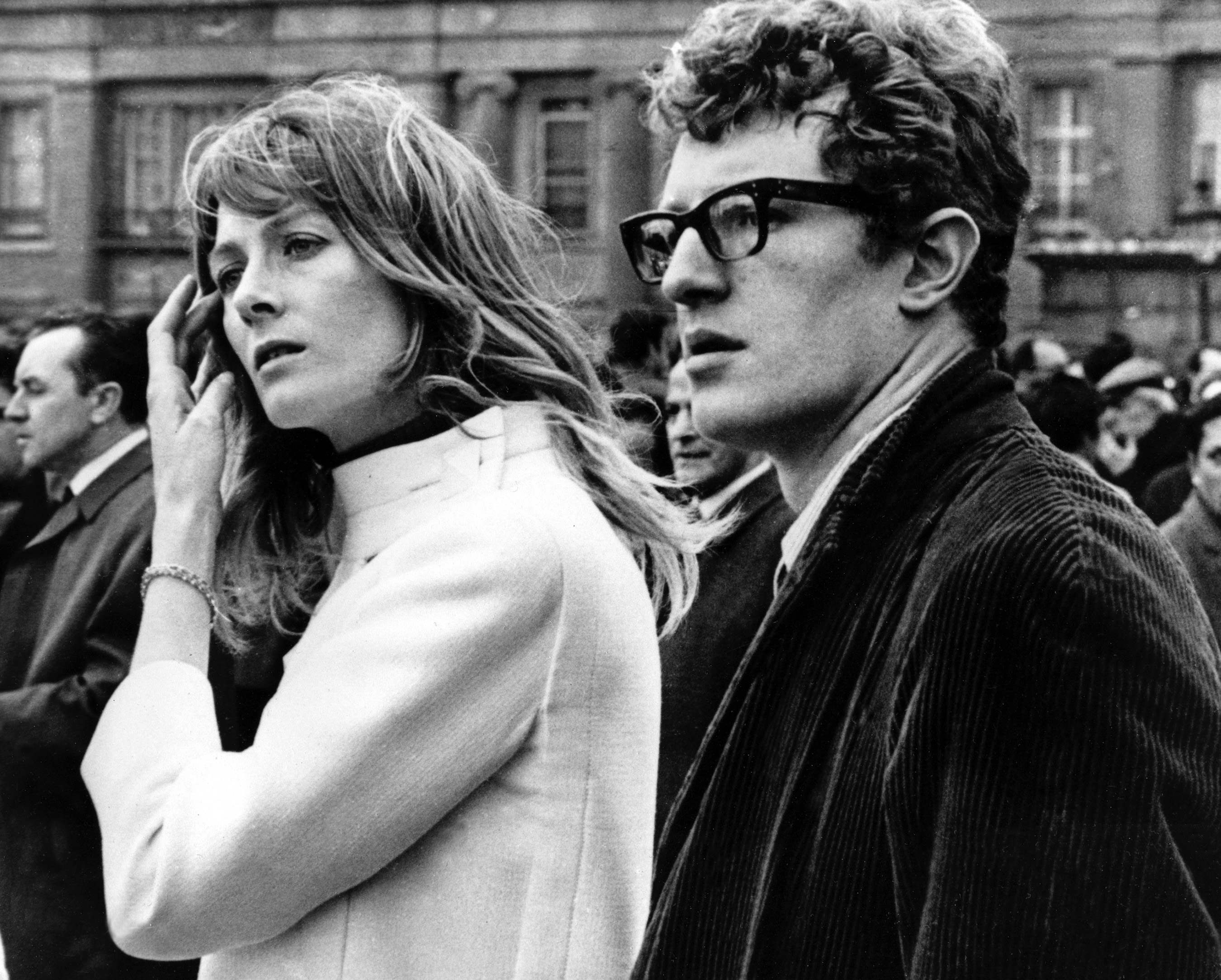 Actress Vanessa Redgrave and her brother Corin, right, are seen during an anti-Vietnam War rally held in Trafalgar Square in London, England, March 24, 1968. The rally is held by the Youth Campaign for Nuclear Disarmament. (AP Photo) 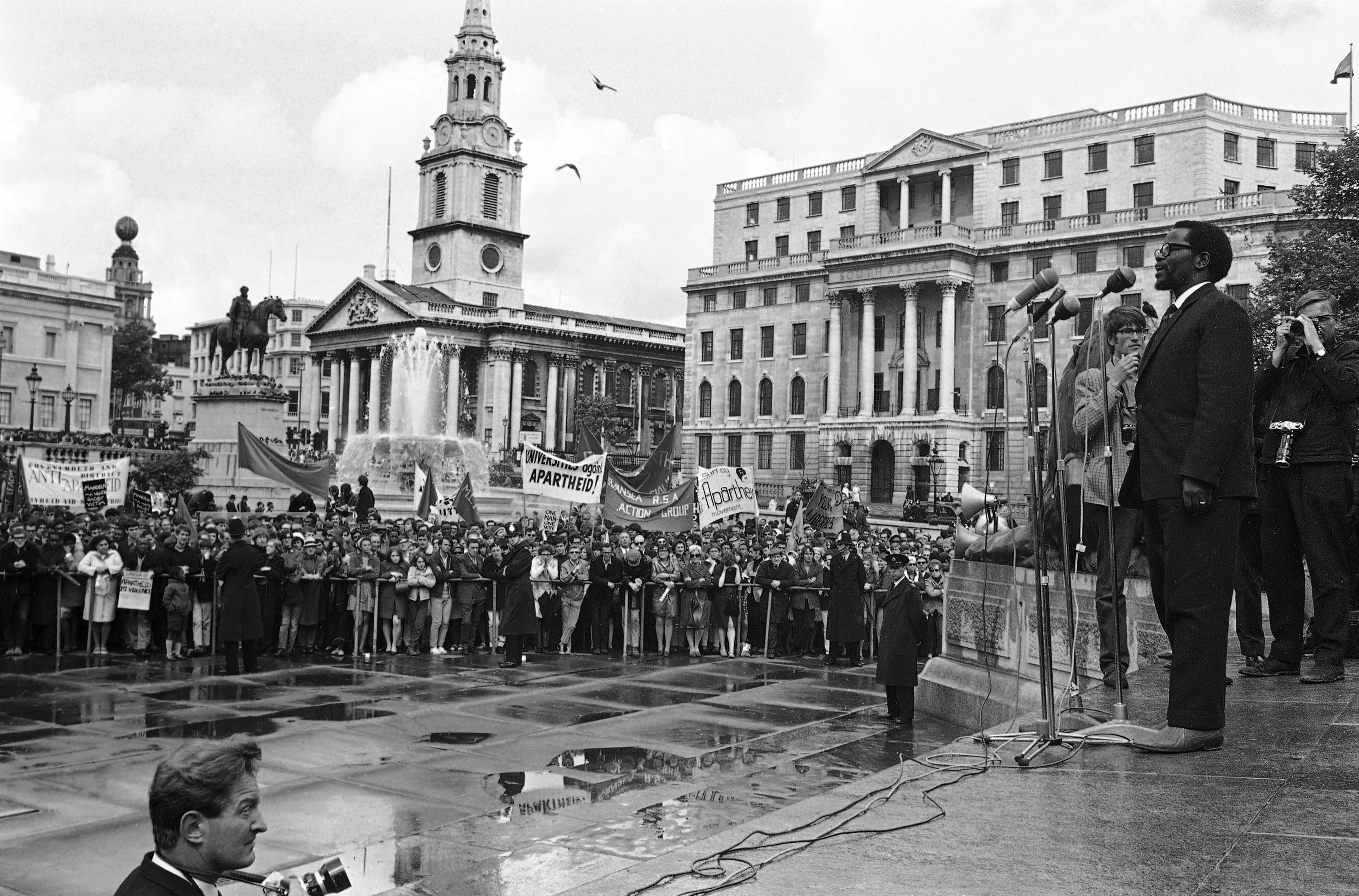 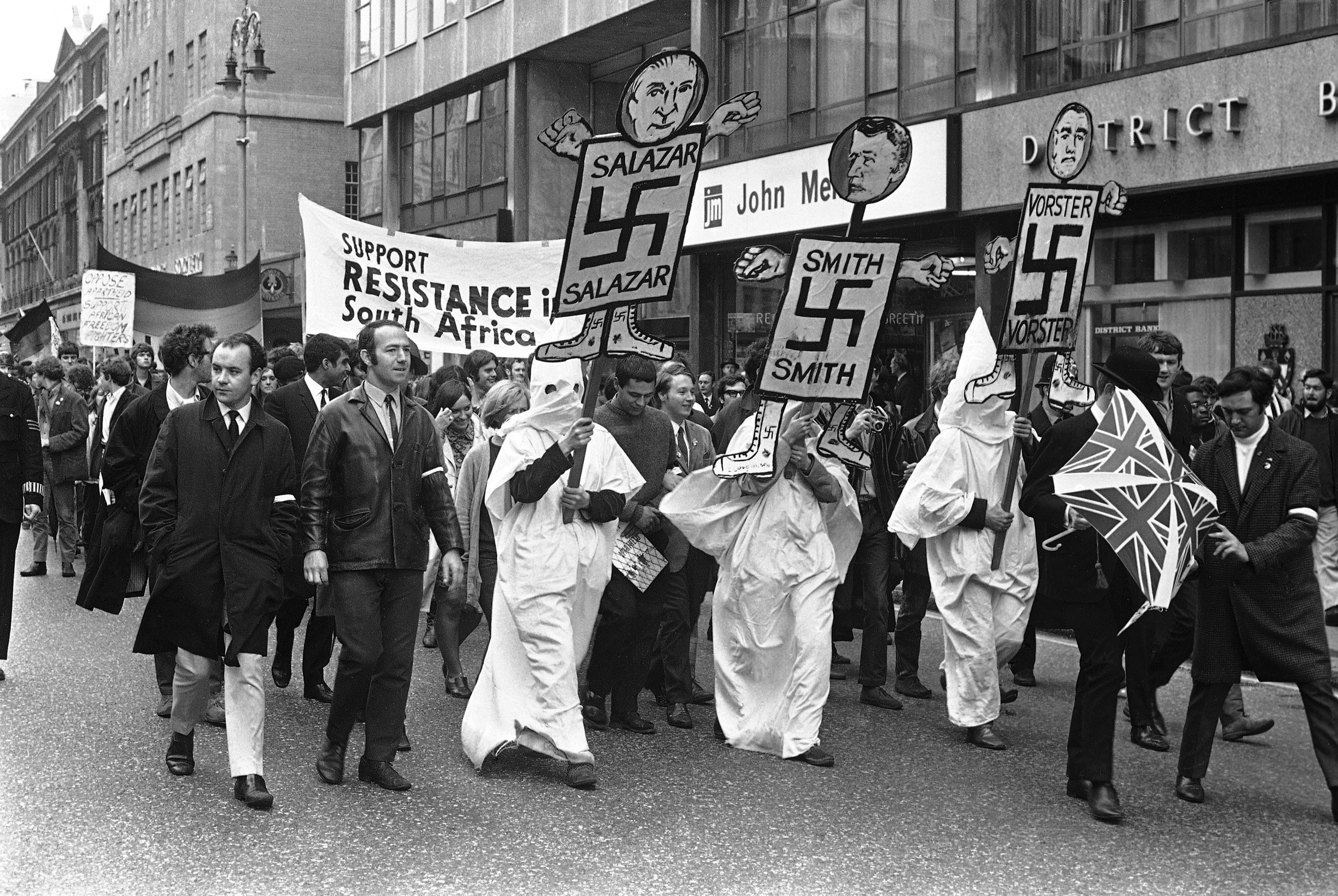 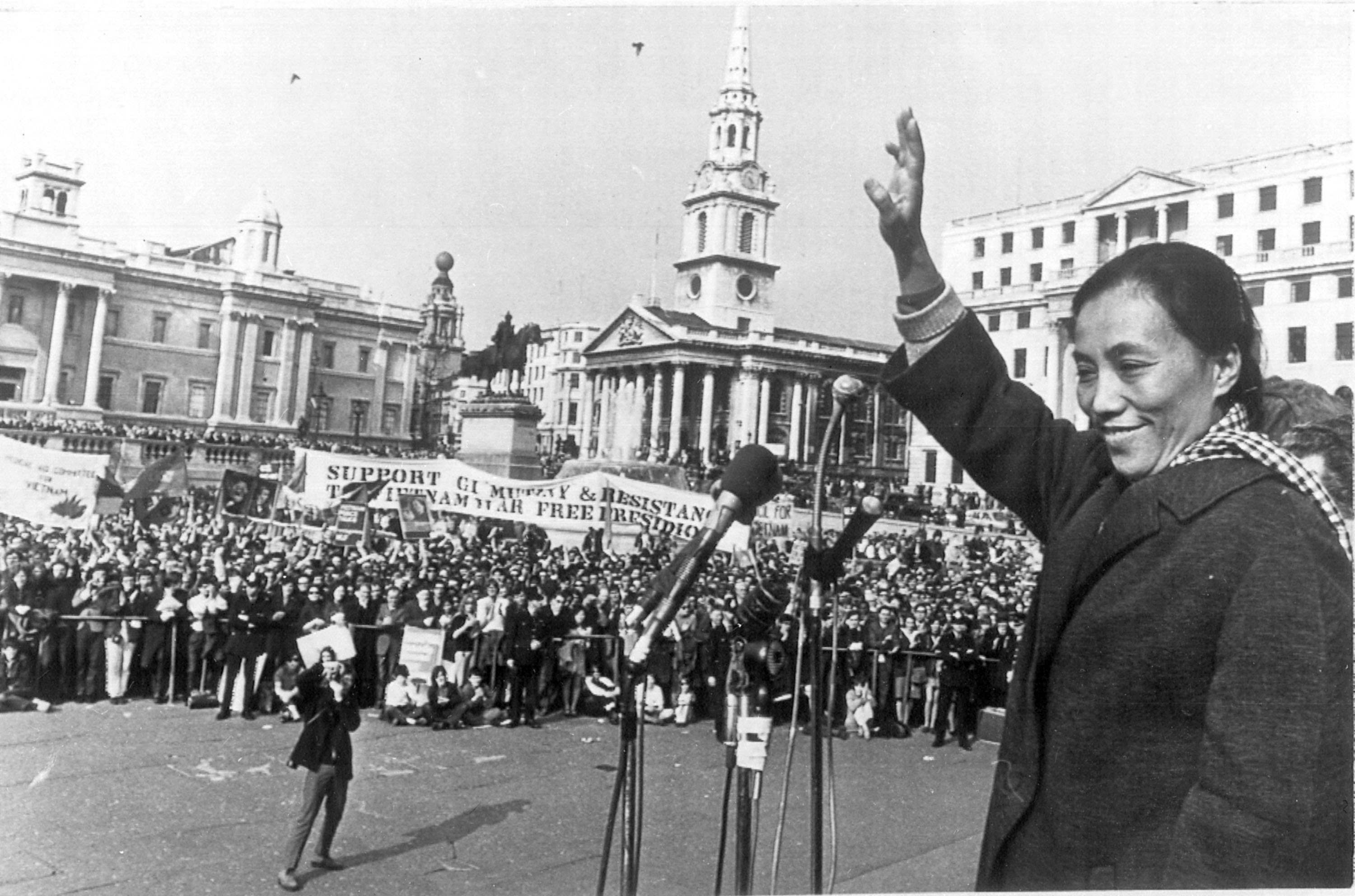 Madame Nguyen Thi Binh, deputy head of Vietnam’s National Liberation Front delegation to the Paris peace talks, waves to the crowd gathered at London’s Trafalgar Square, April 7, 1969. Several thousands of people attended the final stage of the annual Easter March from Cardiff to London, organized by the Campaign for Nuclear Disarmament, CND. Binh joined the march on the outskirts of London, accompanied by members of the British parliament. (AP Photo) 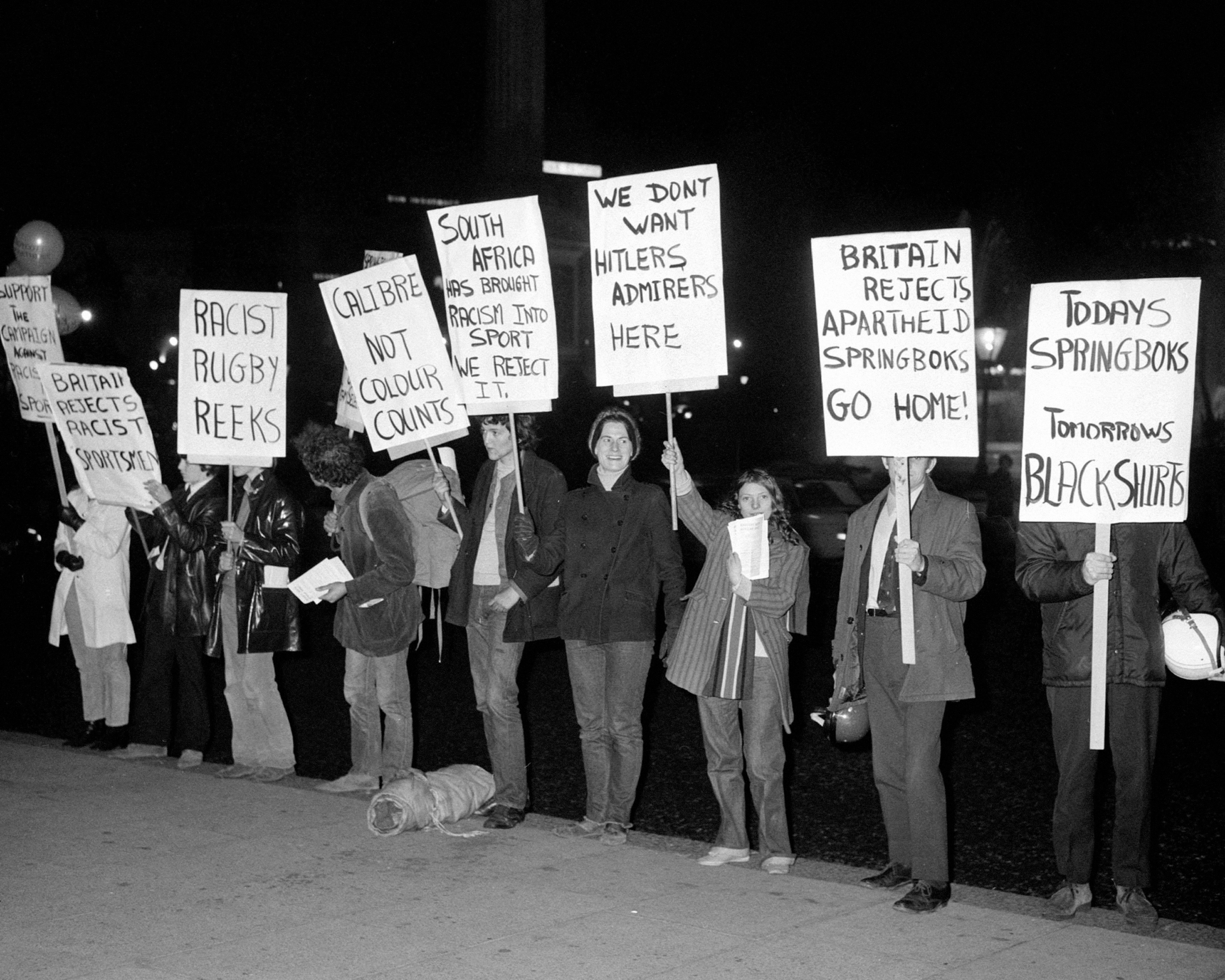 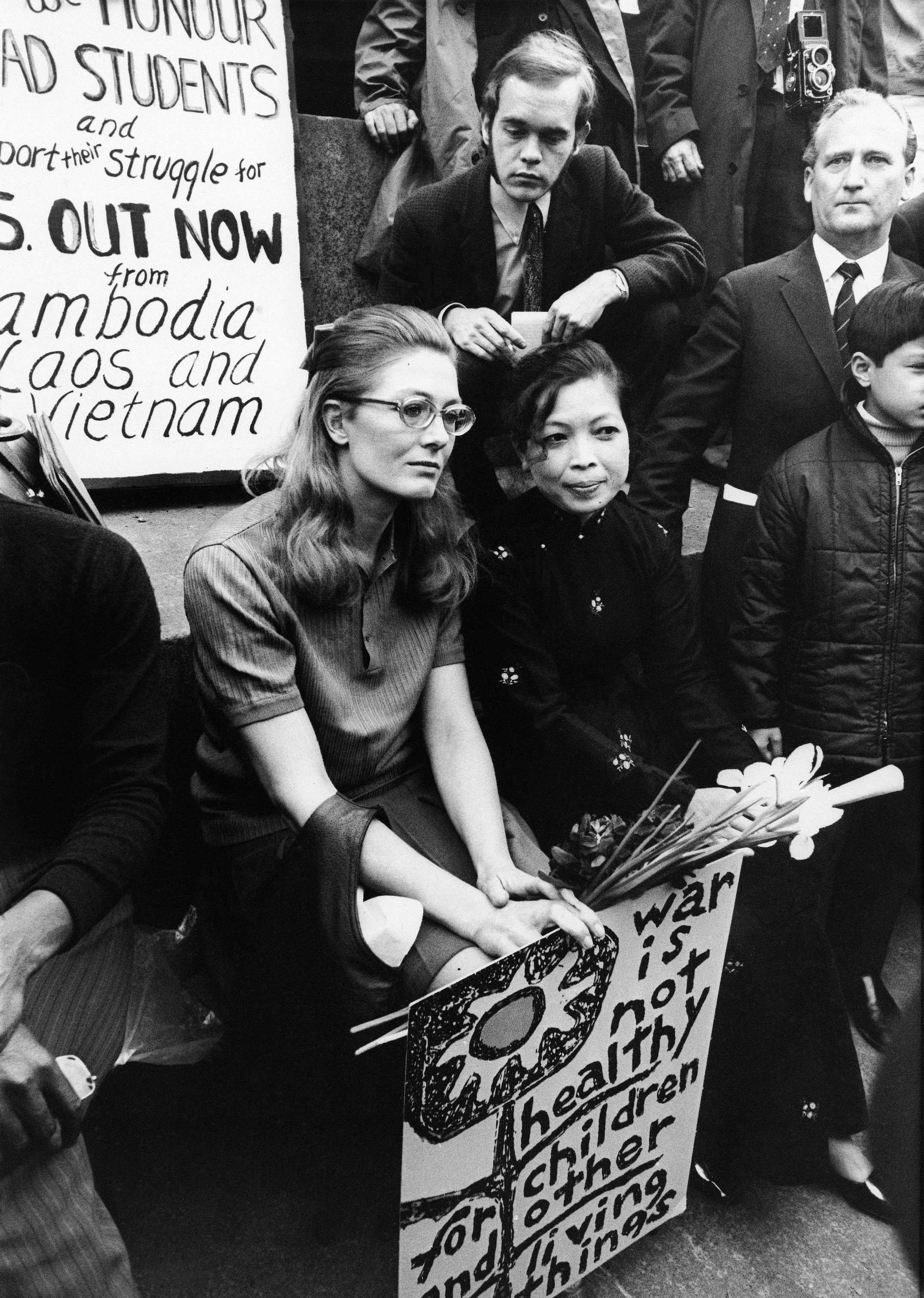 British actress Vanessa Redgrave, left, and Madame Lin Qui, wife of a Vietnamese journalist, are on a dais in Trafalgar Square, London, May 9, 1970, before leading a march to the United States Embassy in Grosvenor Square, in protest against United States involvement in Vietnam and Cambodia. (AP Photo) 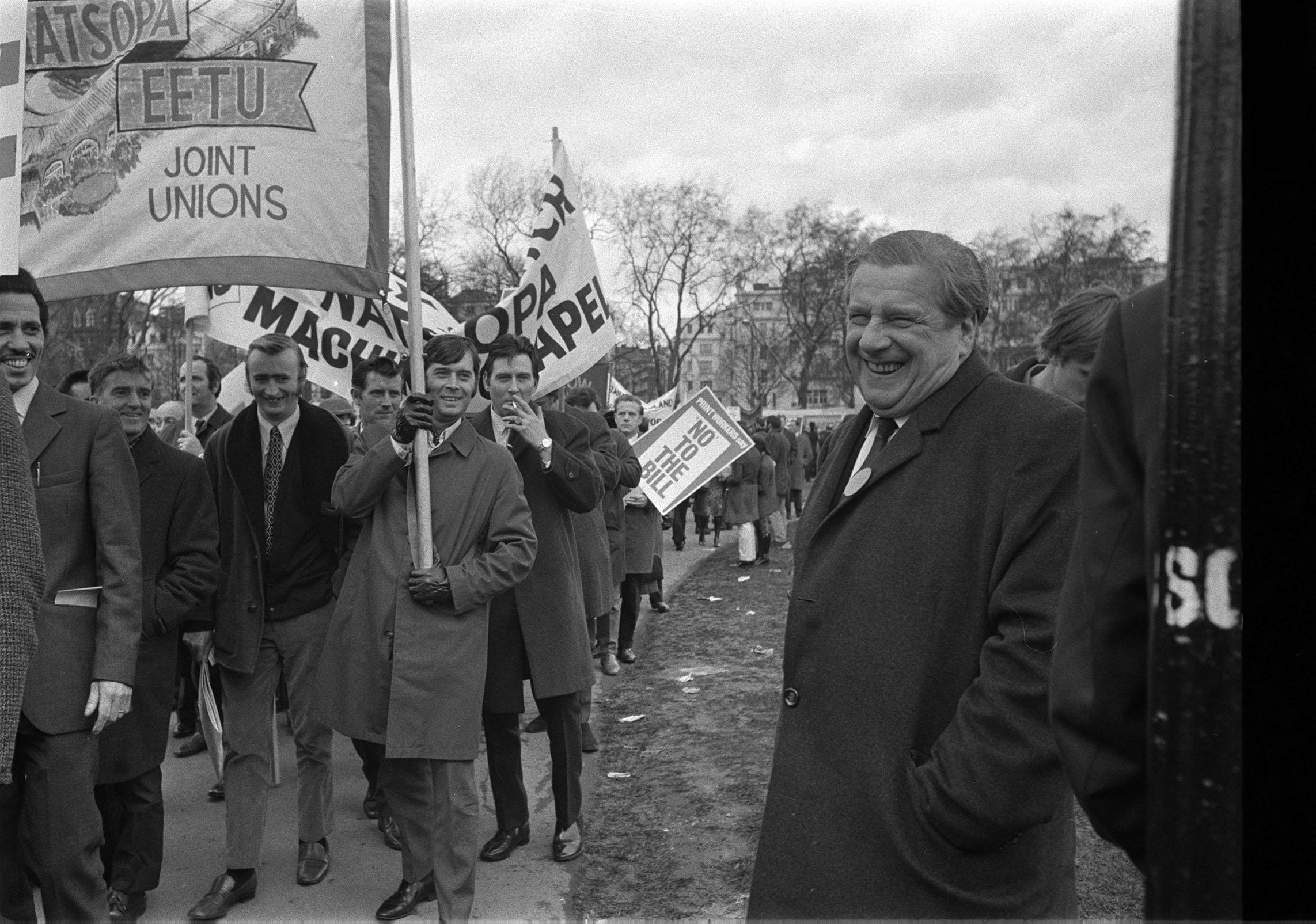 21/7/1971: Sunny smiles on a serious occasion for TUC General Secretary Mr Vic Feather and Trade Union demonstrators as they started off a march from Speaker’s Corner Hyde Park to Trafalgar Square in an organised an ddsciplined parade against the Government’s Industrial Relations Bill. 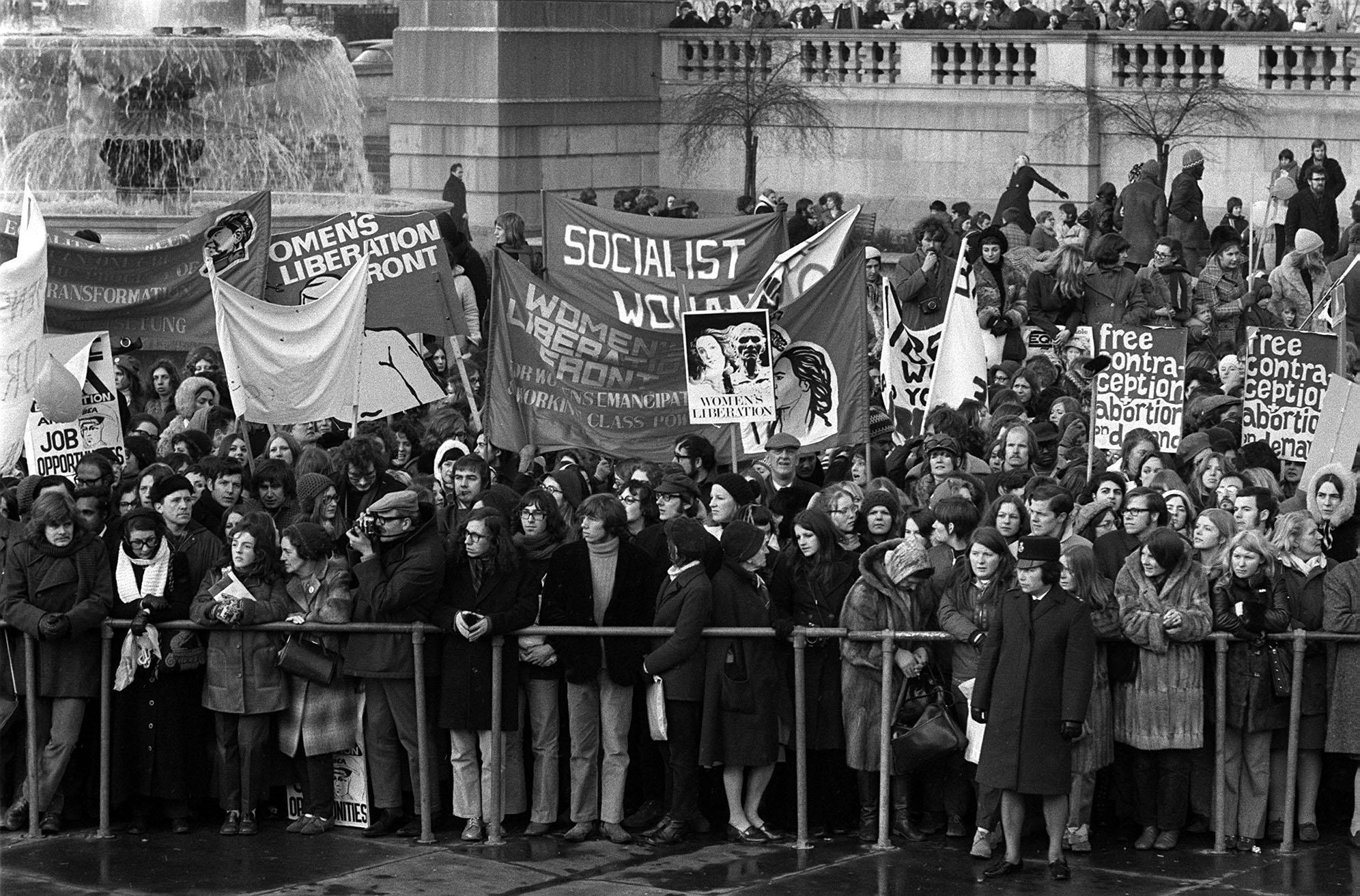