THE Victorians liked to turn the dead into useful objects. They were the great recyclers.

In 1895, William G. Fitzgerald wrote for the The Strand on “Animal Furniture”.

“We have all seen hunting trophies – for the most part mournful looking heads – mounted in monotonous fashion and set up as ornaments in country houses; but he was really a ‘dreffle smart man’ who first thought of adapting these trophies to every-day use – turning them, in fact, into articles of furniture.” 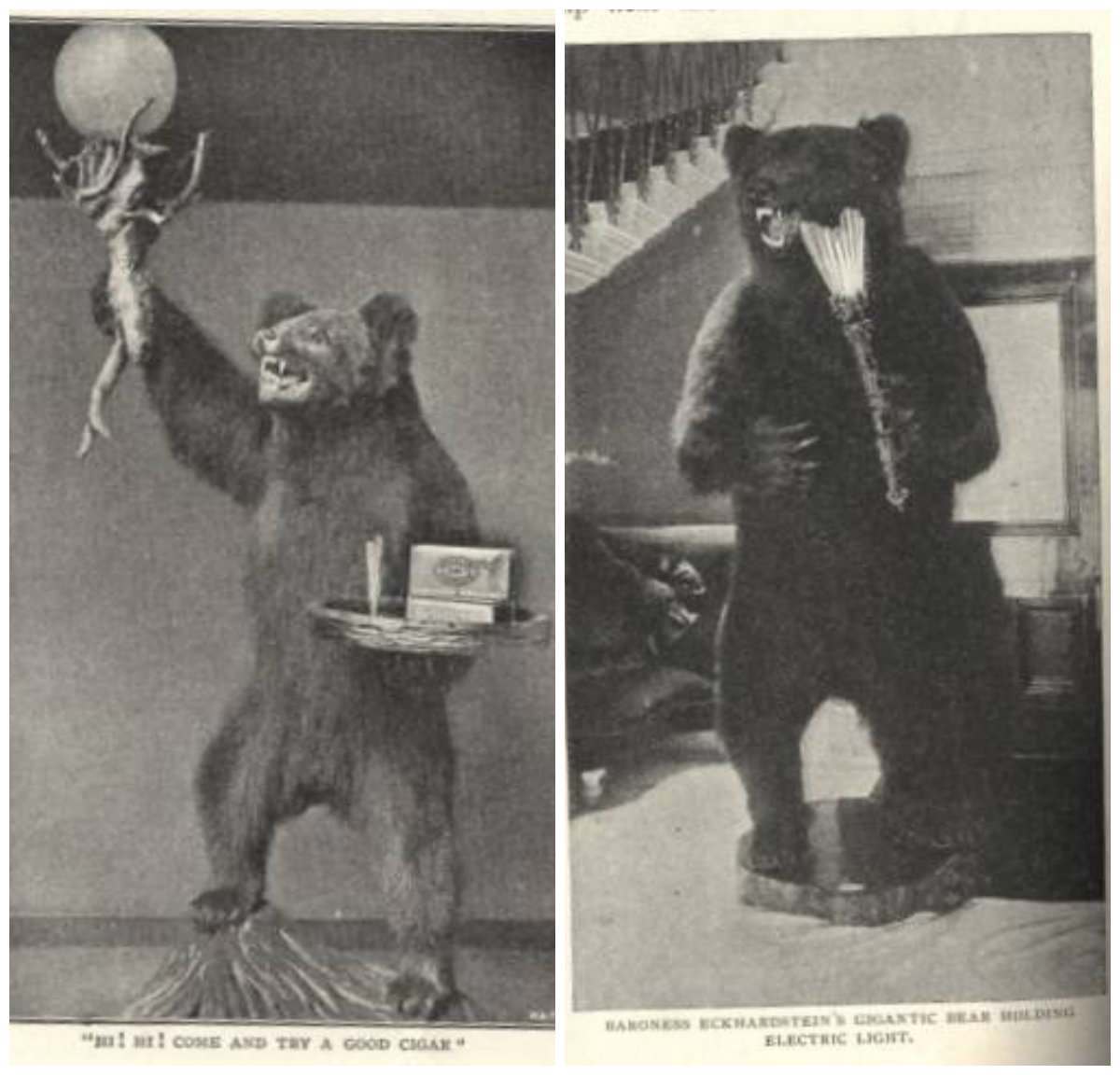 “This obsequious-looking bear was shot in Russia by no less a personage than the Prince of Wales; and for years it has ‘waited’ meekly in the smoking room at Marlborough House. The setting-up of this bear was intrusted [sic] to Mr. George F. Butt, F.Z.S., the eminent naturalist, of Wigmore Street, who has a perfect genius for transforming big game trophies into articles of furniture and general utility. From Mr. Butt I learned that this particular brand of taxidermy is about thirty years old, its origin dating from the time when ladies adopted the hideous fashion of wearing as hats whole grouse and pheasants. In the ‘Sixties,’ when this craze was at its height, the naturalists couldn’t supply the birds fast enough – at four guineas each.” 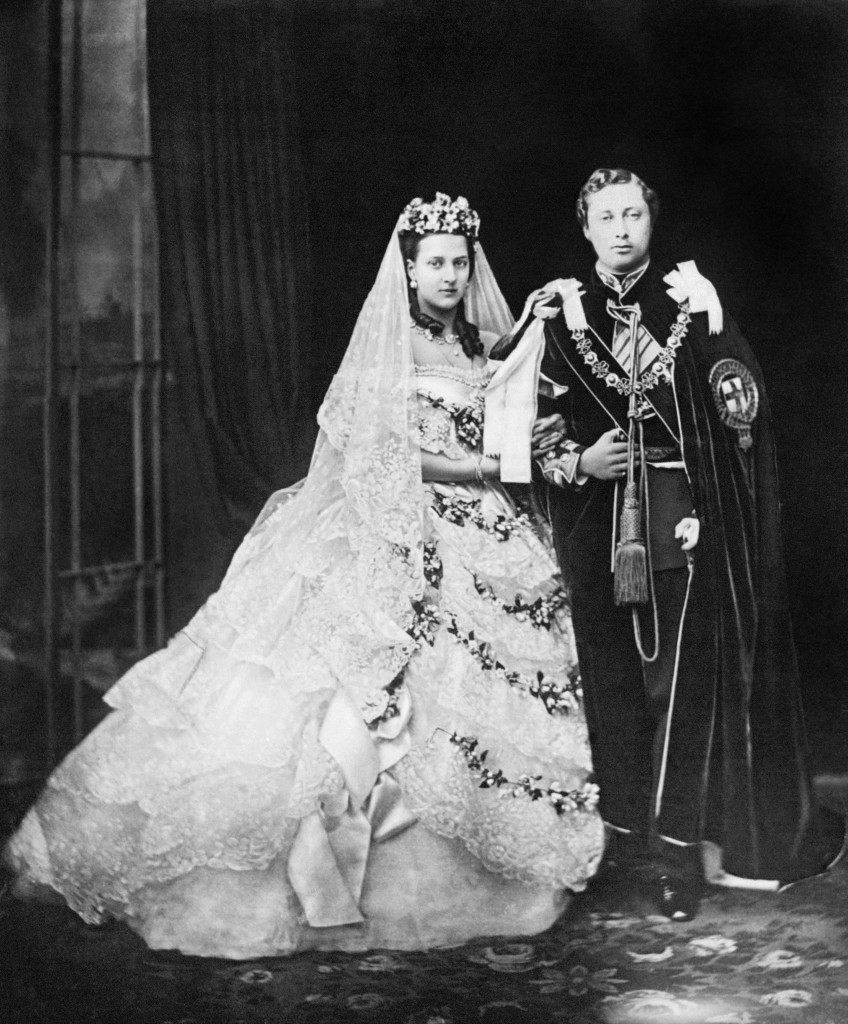 Edward, Prince of Wales (later King Edward VII), and his bride, Princess Alexandra of Denmark, after their wedding.
Date: 10/03/1863

“After these modish abominations came tiger and bear claw jewellery [sic], the notion of which was imported from India; then followed various articles made from whole animals and parts of animals. One of the earliest designs was a horse’s hoof – that of a favorite charger – made into a silver-mounted inkstand. Chairs were also made which were supported by the four legs of a rhinoceros or zebra, or a favourite horse.

But without doubt the most original ‘animal’ chair I ever beheld was that which belongs to that mighty Nimrod, Mr. J. Gardiner Muir, of ‘Hillcrest,’ Market Harborough. This chair, as may be seen in the accompanying reproduction, is made from a baby giraffe, which, with its mother, was shot by Mr. Gardiner Muir, near the Kiboko River, in British East Africa. The design is by Rowland Ward, of Piccadilly. In the photograph will be noticed a little dog on the seat of the chair; this is the hunter’s little Scotch terrier, ‘Punch.'”
“It is quite astonishing to learn how many defunct animals are called upon to throw light upon things. I refer, of course, to animals converted into lamps. Some years ago a certain lady’s pet monkey died, and although her grief was great, she resolved to have her dead darling turned into something useful as well as ornamental. In life that monkey had been phenomenally active – tweaking the noses of dignified people who least expected it; and the sorrowing mistress couldn’t bear to think of the poor little thing as a mere stuffed specimen grinning idiotically beneath a glass case. Therefore was that pet monkey – which is seen in the next illustration – set up as a candle-holder, grasping in its little fists the polished brass sconces, and with quite an eager, officious air.” 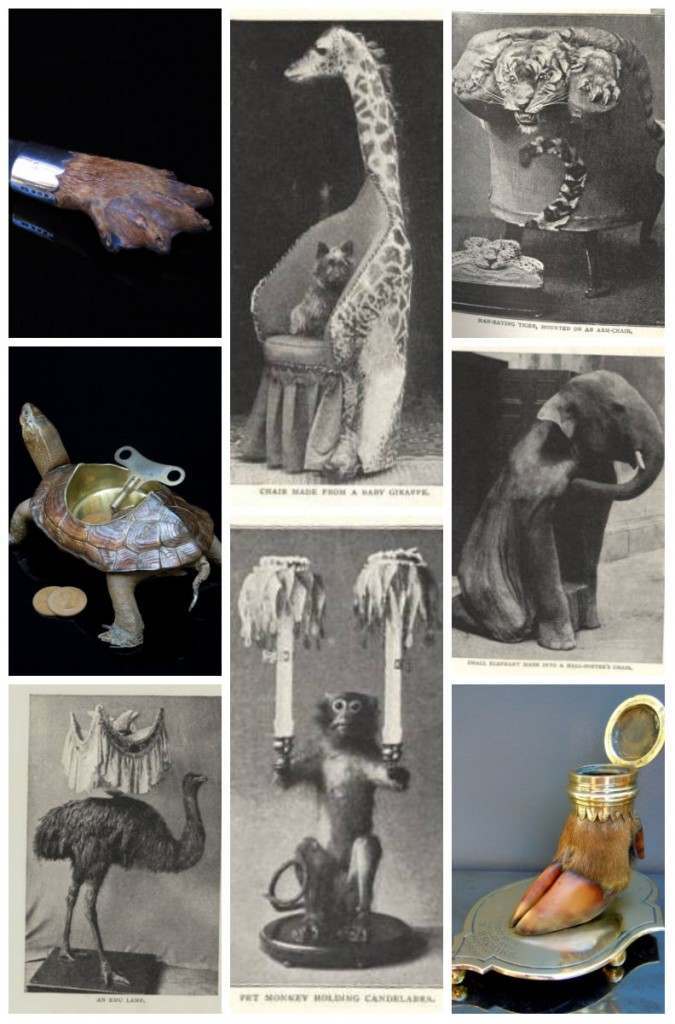 “This set another fashion, and before long a West-end firm (Messrs. Williams and Bach, of New Bond Street) was doing a roaring trade in animal and bird lamps. The designs of many of these are remarkably ingenious. Here is another monkey lamp, in the design of which two active little fellows are supposed to be frolicking together, the topmost monkey bearing the oil-well after the manner of Atlas, with his tail coiled around the cross-bar, while his playfellow is scrambling up the pillar as though anxious to share the burden and the fun.”

“For some reason, innumerable monkeys were sold to light up billiard-rooms, the little animals swinging from a hoop with one hand and carrying the lamp in the other. After a time people other than those who had dead pet monkeys wanted to possess these unique lamps, so that defunct specimens from the Zoo had to be eagerly bought up, and Mr. Jamrach, the famous wild beast importer, was vexed with orders for deadmonkeys.

Later on less uncommon pets – parrots and cockatoos – were utilized in a similar manner, and at length this latter form of the craze reached preposterous dimensions. Will it be believed that the Bond Street house (I have it on the authority of the manager) had actually to keep a stock of live parrots and cockatoos, so that aristocratic customers could select one for a swinging lamp? After selection, the doomed bird was sent along to the taxidermist, killed immediately, and then mounted in the style chosen…Oh! Fashion! What cruelties are perpetrated in thy name!”

“Of course the idea of turning into useful articles pets that have died from natural causes or old age is at once ingenious and praiseworthy. Here, for example, is a fruit and flower stand made by Mr. Geo. F. Butt for the Princess of Wales; it is now at Sandingham. The centre is a movable screen composed of a favourite parrot belonging to Her Royal Highness.” 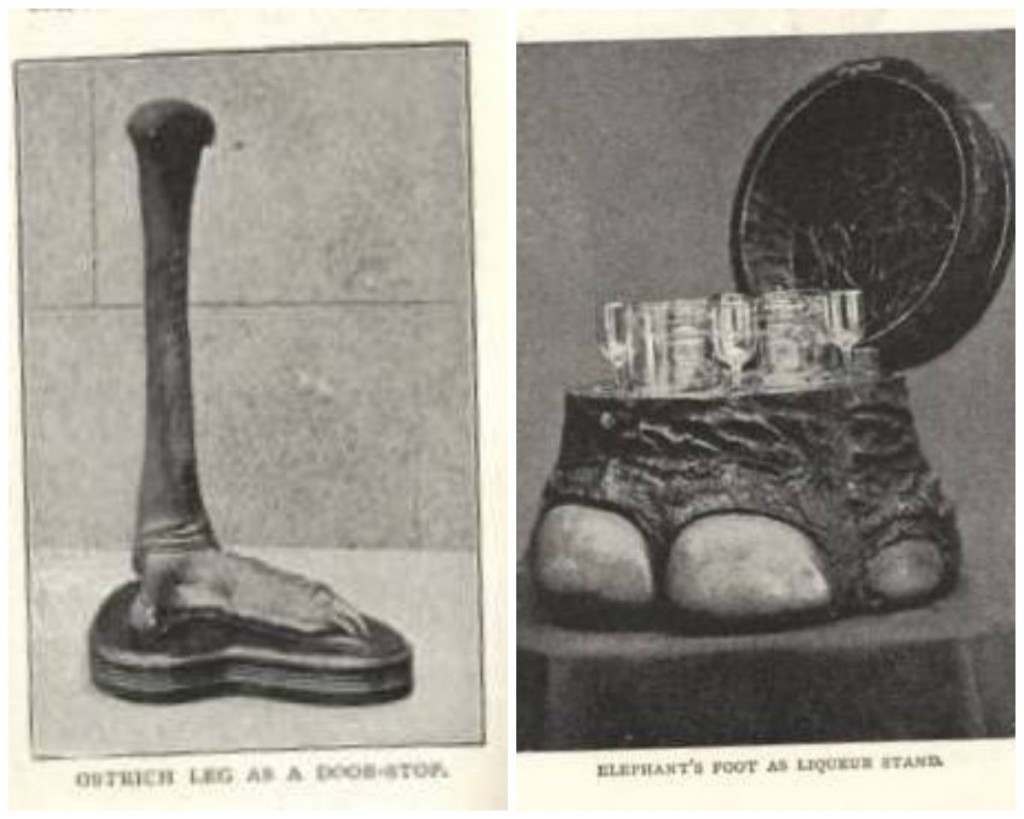 “To merely catalogue the various items of ‘animal’ furniture I have seen would fill whole pages of THE STRAND MAGAZINE. I have been shown ugly-looking ‘knobkerries,’ fashioned by natives from the horns of the rhinoceros. There are scooped-out pheasants as pie-covers; the eggs of emus and ostriches as basins and jugs; hares’ heads as matchboxes; flying opossums holding card-trays; coiling snakes as umbrella stands; capercailzie claws as candlesticks; wild asses’ ears as tobacco-pouches; hippopotamus skulls as armchairs; foxes’ heads as tooth-pick stands; elk and wapiti legs supporting tables; panthers hugging satin-lined waste-paper baskets; flamingoes holding electric lights in their beaks; swans’ necks as ink-bottles; crocodiles (with very expansive smiles) as dumb waiters; and elephants as ‘cosy corners.'”

“The moment the door is opened at Baroness Eckhardstein’s beautiful house in Grosvenor Square, this gigantic and truly formidable bear is seen flooding the hall with a soft red light. This bear is one of the very largest ever seen in this country. It was shot during one of its fishing excursions in Alaska, and set up by Rowland Ward, who presented it to the Baroness on the occasion of her marriage. The electric light can be switched on from behind.”

“This ‘tiger chair’ is a capital example of ‘animal’ furniture. The seat is covered with the beautifully-marked skin, and the head and paws are so arranged as to give the impression that the terrible animal is about to spring. Observe the ingenious way in which the tail is disposed, as though the tiger were coiled right round the chair. This chair was made by Mr. Butt for a gentleman in the Indian Civil Service, and it is particularly interesting from the fact that the tiger was a dreaded man-eater, which had devastated and appalled several villages in Travancore. The day it was shot, this brute came into a village in search of a dainty meal, and succeeded in carrying off a little white girl, ten years of age. This child was afterward rescued but she was so shockingly lacerated that she died the same night in the house of a missionary doctor.”

“Stranger still, we next behold the foot of a big elephant fashioned into a liqueur stand, so that it may be placed on the table in the midst of a group in reminiscent mood, Nimrods who may, perchance, be fighting their battles over again. This is one of Mr. Rowland Ward’s registered designs. The foot is that of an Indian elephant – a magnificent beast – shot by the then Duke of Edinburgh, during a well-known tour.

Very large elephant feet, by the way, are coveted trophies, and are, moreover, interesting indications of the height of their late possessor, twice the circumference of the forefoot giving the height of the elephant at the shoulder.”

“The elephant here shown is not exactly a ‘cosy corner,’ but he forms quite a unique hall-porter’s chair; at the same time, it would be somewhat invidious to speak of the thing as an ‘elephantine hall-porter’s chair’ – even though in some cases the description might be peculiarly appropriate. This accommodating animal is a young Ceylon elephant, modeled by Rowland Ward in a perfectly natural position, but adapted for the use of the hall porter. The hall porter asleep in this singular chair, by the way, should make an interesting picture.”

“The last piece of ‘animal’ furniture depicted in this article is a capital specimen of Mr. Butt’s artistic work – a bear set up as a dumb waiter, carrying in one hand, or rather paw, an electric lamp with frosted globe, and in the other a tray with a couple of boxes of cigars and some paper pipe-lights in a liqueur glass. Notice the excited appearance of the bear, who seems to be perpetually roaring at somebody, and doing is duty only under very forcible protest.” 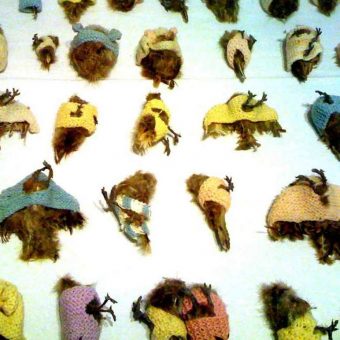 The Artist Who Dressed Dead Sparrows in Hand-Knitted Jumpers (1972) 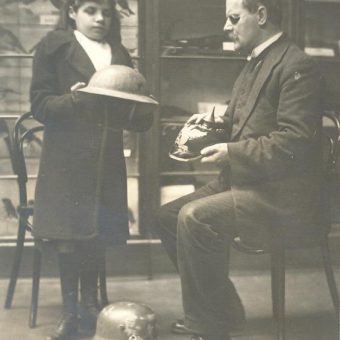 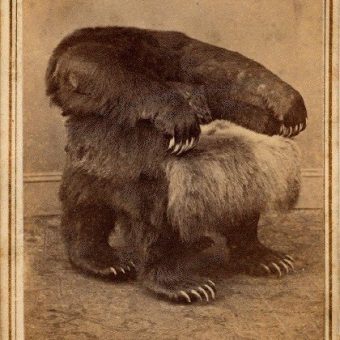