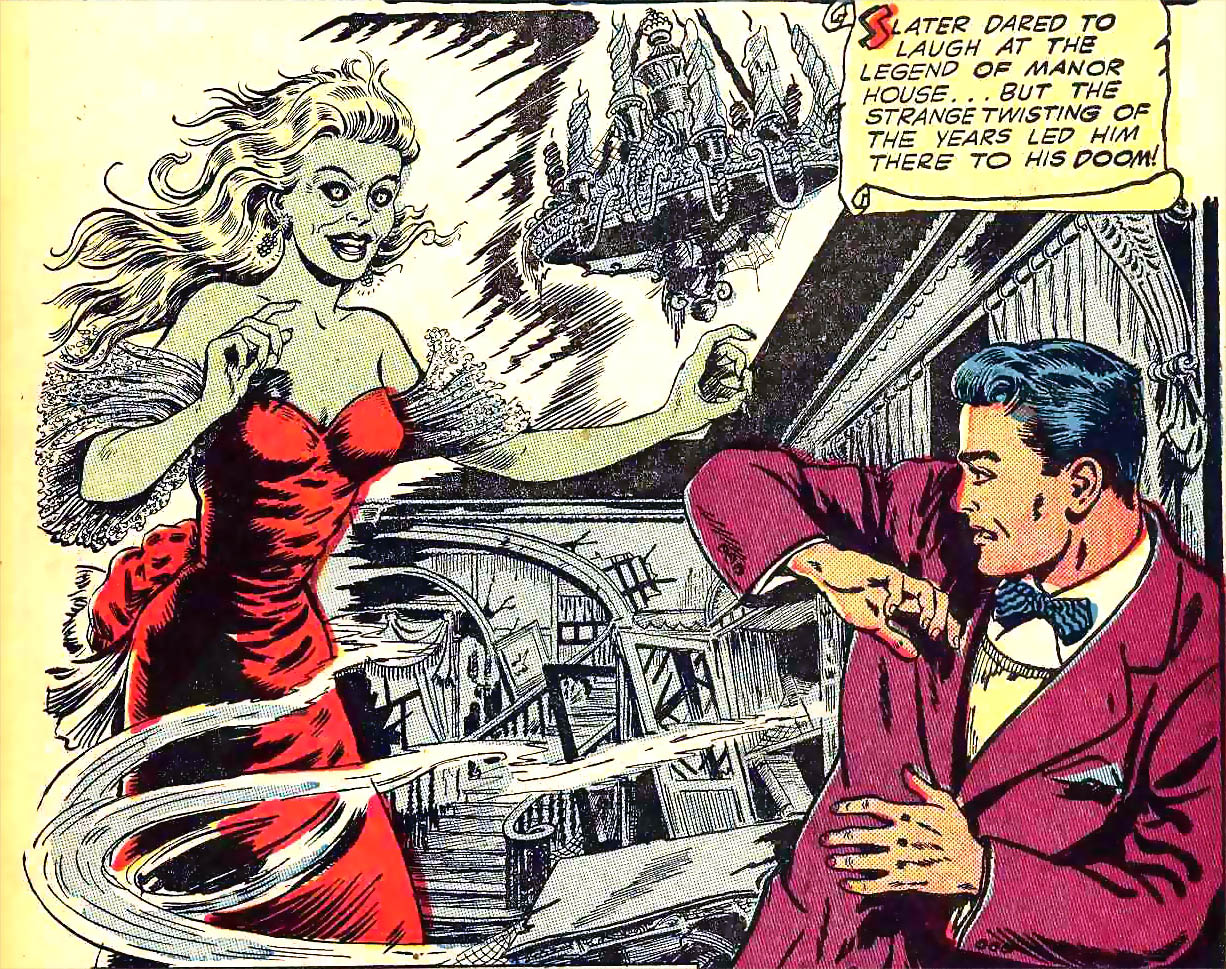 “Slater dared to laugh at the legend of the manor house…”

Horror comic books like Tales from the Crypt followed the same basic pattern with nearly every story: somebody makes bad choices, and that somebody learns a lesson the hard way…. usually in a creatively grotesque fashion. These comics were extensions of fairy tales; cautionary stories which have been told to kids since the dawn of time.  While fairy tales were provided lessons for boys and girls alike, these twisted comic books were almost exclusively for the lads, and so the violence and horror were kicked up a notch.

Let’s take a random stack of horror comics and have a look at the mistakes made, and the resulting punishment.  Take notes, you may learn something… 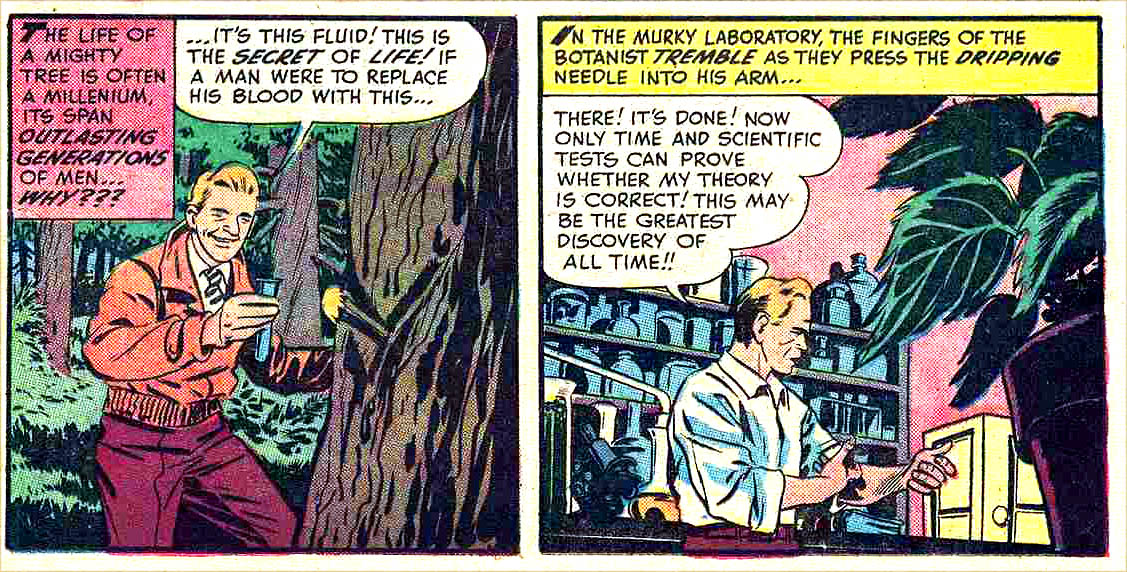 The scientist who plays god – this old chestnut has been around since before Mary Shelly.  Here the doc thinks he’s got the “secret of life” discovered.  Think again, doc… 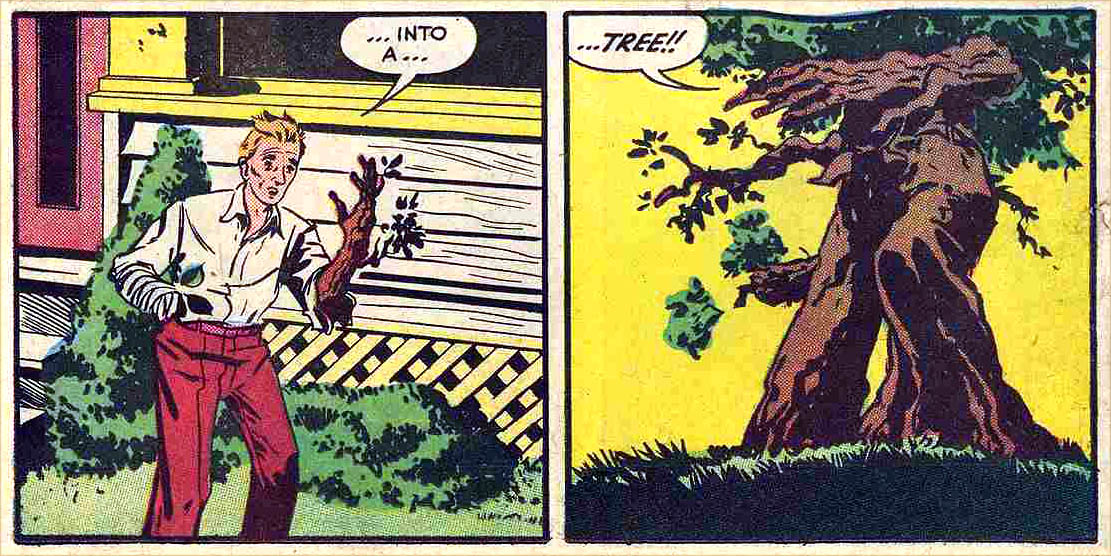 The scientist who plays god always gets shafted in the end.  Here, he turns into a tree, kills  his girlfriend, then gets burned to cinders by an angry mob.

A deadbeat has recurring dreams about dying in a car crash.  His conniving fiance won’t marry him until he can earn some loot… she suggests killing Old Man Forbes.  What could possibly go wrong?  Fast forward a couple pages…

He manages to run over his fiance before dying in a car crash – it seems his dreams were prophetic…. a tragic ending we saw coming a mile away.

A couple heads to the jungle, where the wife hooks up with the camp doctor.  Naturally, she plots to kill her husband and live happily ever after.  But as we know, adultery and murder, even though far from civilization in the deep jungle, always yield heavy consequences in horror comics…. and this one does not disappoint.

This cheating murderer gets what coming to her big time – with a ring through her nose and a betrothal to the local witch doctor!

Hugo Crane is a ruthless greedy asshole who treats his underlings like garbage.  His employees conspire to dress as monsters to scare him, to teach Crane a lesson and maybe turn him around.

You might expect Crane to meet a grisly end in this comic, paying the penalty for the suffering his caused.  But, if you really know your cautionary tales, you’ll know it’s the conspirators that will end up biting the dust… 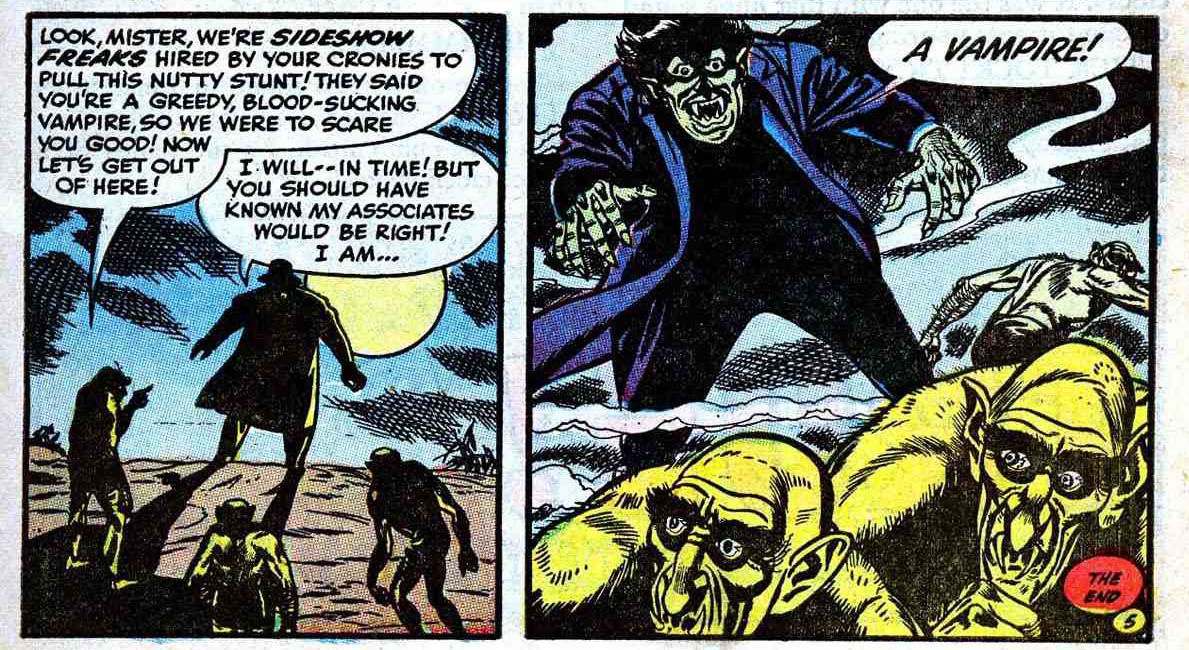 The lesson: No matter how much of a douche-bag someone is, you can’t teach them a lesson through devious behavior.  Turn the other cheek and suffer with grace (a la Bob Cratchit), but don’t ever trick your tormentor – because in the world of the morality tale, the ends never justify the means. 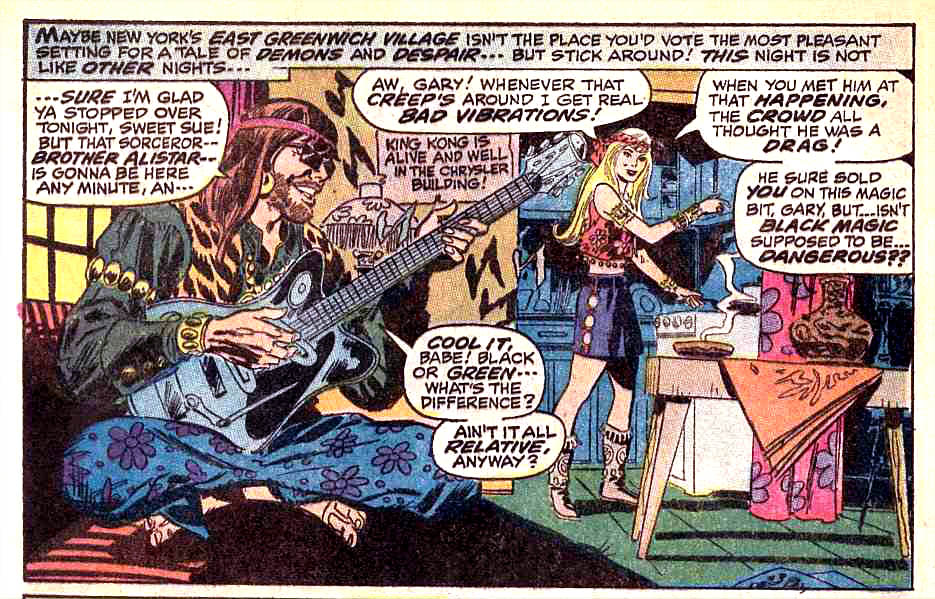 “He sure sold you on this magic bit, Gary, but isn’t black magic supposed to be.. dangerous?” says the hippy chick.  We, the reader, know damn well what’s coming to these flower children.  You don’t ever – ever – fool around with the occult in horror comic books.  Bad things happen when you do. 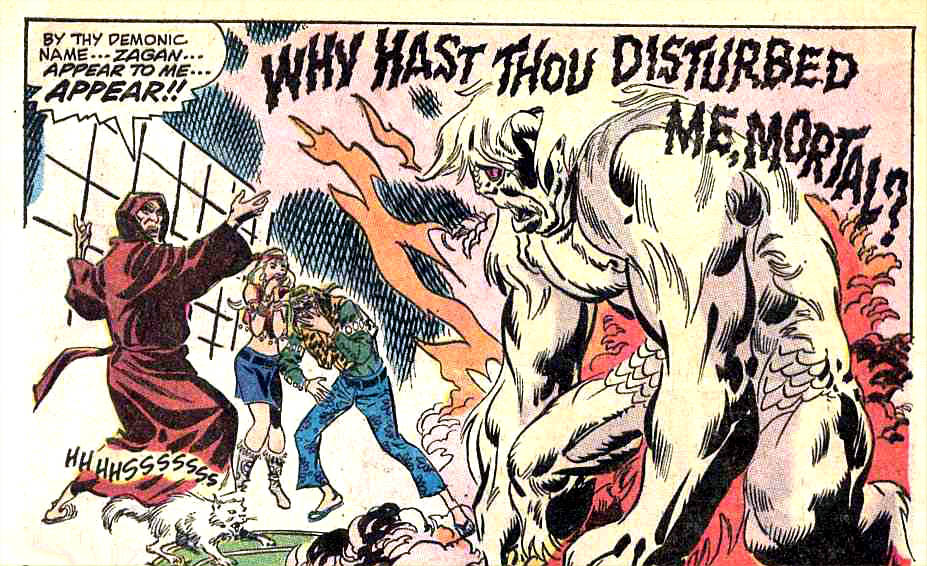 These dirty hippies should have stuck to free love and psychedelics.  Playing with black magic is not tolerated in horror comics.  In this case, a demon from the inner circle of hell has come to issue punishment.

Lydia and Tex are popular kids playing a little prank on the school nerd, Don.  Well, if you’ve seen Carrie, you understand that bullying is a cardinal sin in the horror universe.

Stephen King was highly influenced by these old horror comics (as he states in Danse Macabre) – he understood that humiliating the weak will always result in a brutal comeuppance. 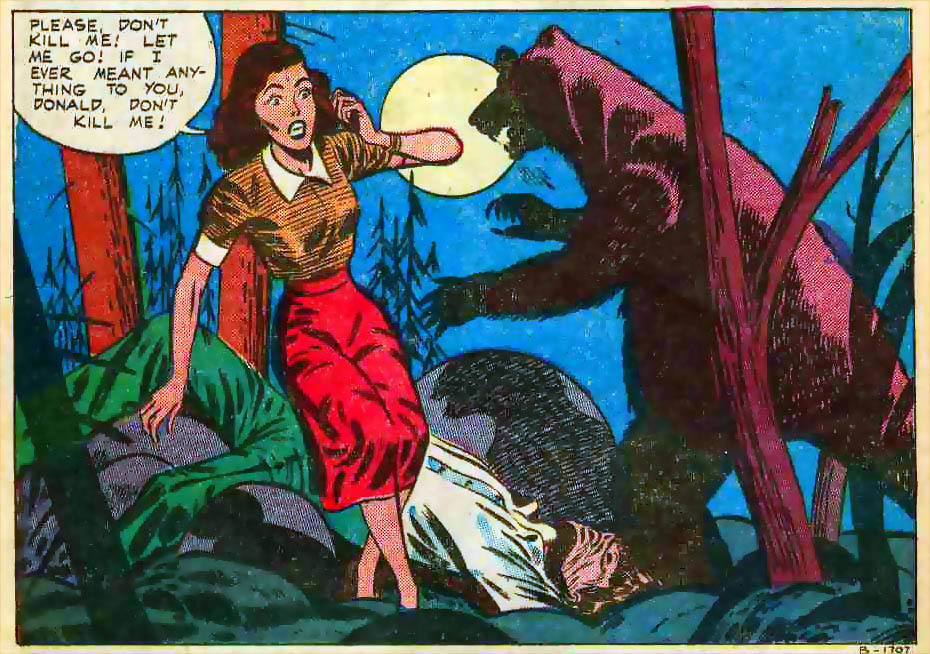 Don isn’t telekinetic like Carrie White, but he can turn into a bear.  A lesson to all you school bullies: take it easy on the nerds, or you might just get BTFO’d by a werebear.

One of the great lessons taught in horror comics is that fear is healthy.  The over-confident and unafraid will die, while those that approach the unknown with caution survive.  We’ve seen it a million times in horror movies: the folks that stroll into darkened basements get decapitated; those that play with Ouija boards become possessed.  It’s a lesson so old, I’m sure cavemen taught it to their cave-children: if you hear a rustling in the night, stay close to the safety of the fire – the ground is littered with the bones of the unwary.

Candy Phipps was unmindful of the sounds, and subsequently pays the ultimate price.  You can be guaranteed that, when a character in a horror comic pays no mind to warnings, that character isn’t going to make it to the end of the story alive.

Another similar cautionary tale: Kathy laughs at the legend of the Smiling Woman, and has no problem with going in the house alone. Thus, Kathy has no healthy fear of the unknown, so we all know what that means: Kathy must die.

But there’s a second component to this story: Slater and the other “Rocket Jet” kids decide to pull a prank on Kathy by dressing up as the Smiling Woman and scaring the living shit out of cocky Kathy. 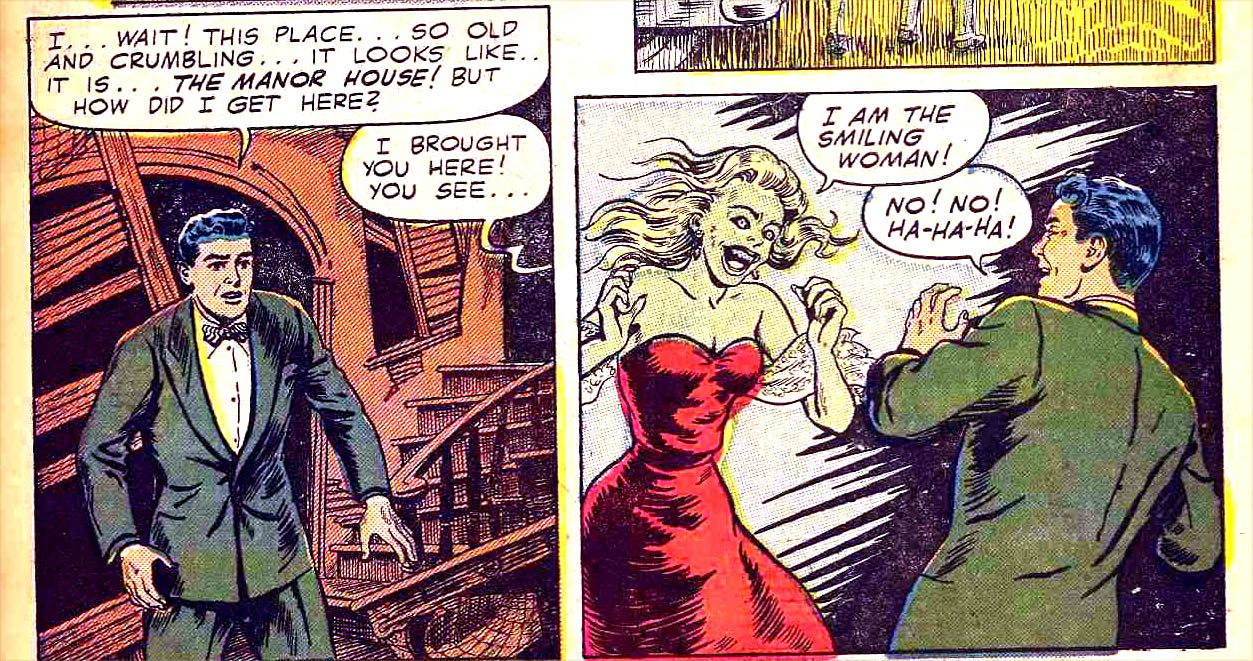 Kathy goes insane due to her recklessness, but the Rocket Jet crew must also pay the price.  Remember from the prior werebear/Carrie example: bullies always pay for their sins.  In this case the Smiling Woman haunts each member of the crew, driving each of them mad.  We got two lessons for the price of one in this story, folks.

This one is somewhat perplexing, for reasons we’ll soon see.  It’s written by none other than Stan Lee, who evidently didn’t know the horror comic rules.

Nick is a mass murdering mobster.  He thinks he’s screwed and hides out with Dolly, a burlesque dancer.  She recommends that he just get a top lawyer, and he’ll be free and clear.

Nick ends up killing half the city, and Dolly has had enough of it.  She purchases a book on necromancy and literally makes a pact with the devil.

Now, if this were any self-respecting horror comic, we would expect Dolly to pay the piper for summoning Satan, and getting Nick this lawyer in the first place.

Instead, we find that Nick and his soulless lawyer are confronted by a jury of Nick’s victims.  Dolly, presumably, lives happily ever after.

Stan Lee was a great superhero writer… maybe not so great at the horror comic.  He should have known that no bad deed goes unpunished; plotting to have her man killed by making a pact with Lucifer should have led to a terrible and ghastly reward. 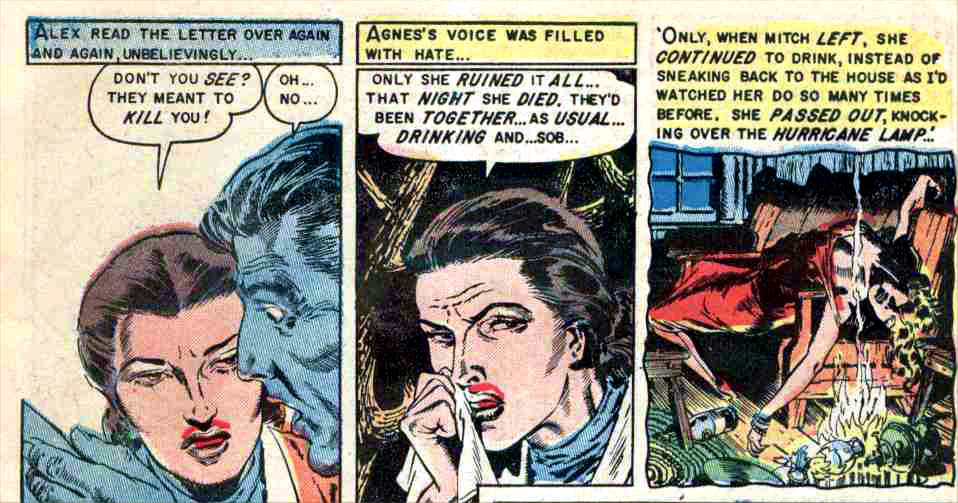 Leaving Stan Lee’s fail behind, let’s at last look at the greatest of them all: the EC comics – Tales from the Crypt, Vault of Horror and Haunt of Fear.  Nobody delivered a ghoulish morality lesson better than the comics of Bill Gaines.

In this issue we find a maid, Agnes, telling her master, Alex, not to grieve for his dead wife, Sylvia.  Why? Because, before Sylvia died in the fire, she and her lover, Mitch, were planning to kill Alex!

Devastated, Alex kills himself… but not before leaving his entire estate to his loyal servant, Agnes.

Of course, this was all bullshit.  Agnes lied to Alex in order to gain his fortune.  She and Mitch think they’ve gotten away with it too… until Alex comes back from the dead to exact his revenge.

That, my friends, is how it’s done.  THE END 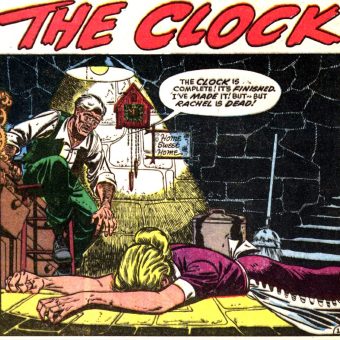