Just when you thought we couldn’t find a retro niche obscure enough, we’re diving in to VHS action movie box art from Sweden!  Trust me, it’s worth the trek off the beaten path- these covers are a treat to behold. 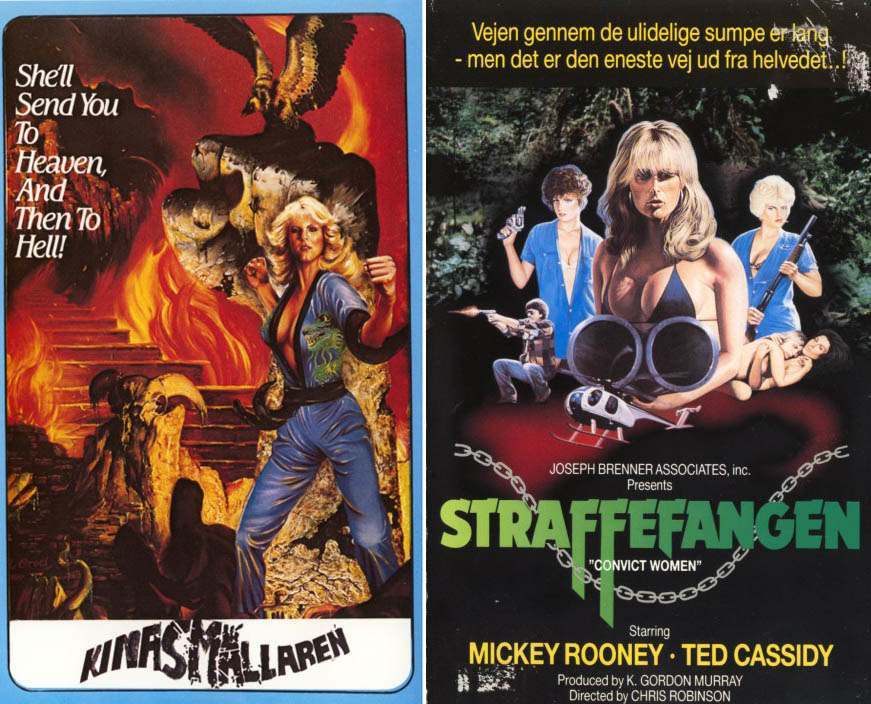 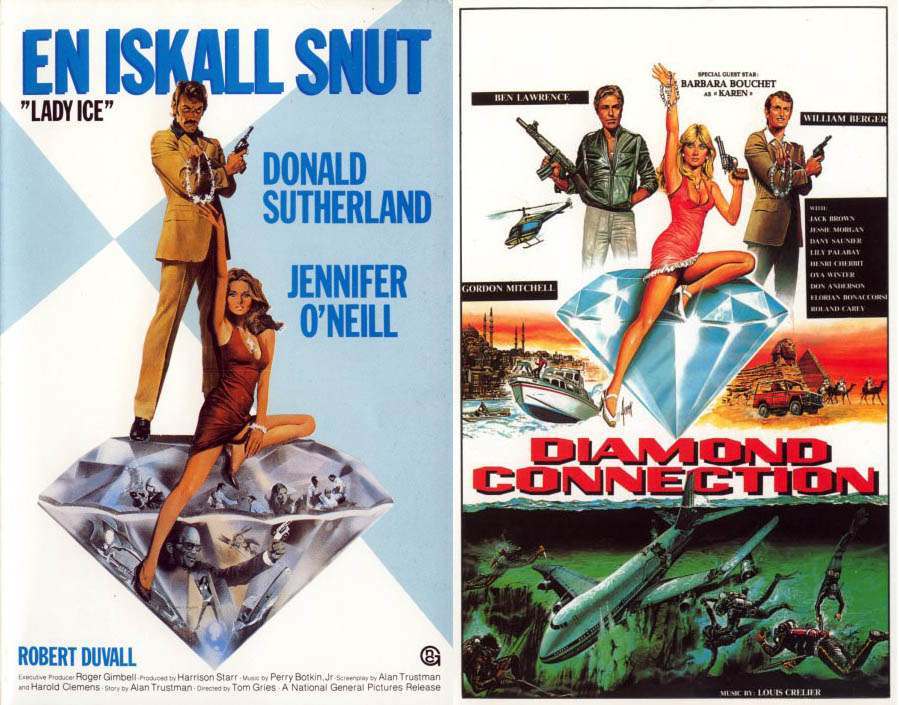 These are two totally different movies (both are Swedish VHS covers).  Yet, look at Jennifer O’Neill and Bouchet – the exact same position atop a giant diamond.  WTF? 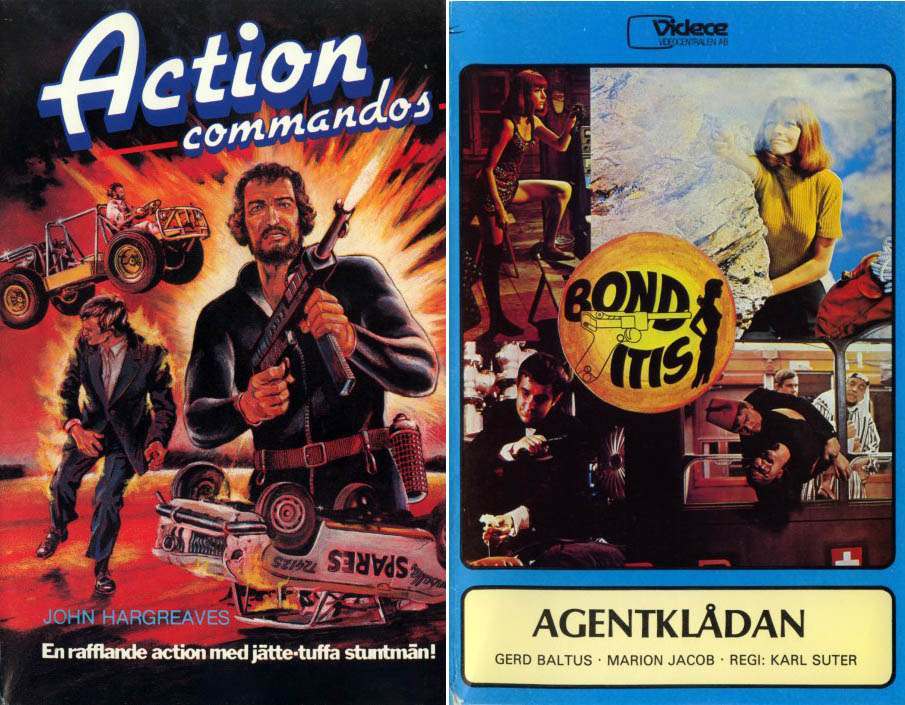 (L) Flying cars, a guy on fire, a “Spares” (?) vehicle in flaming ruin, random fully automatic weapon gunplay…. by necessity, this must be one of the best movies ever made.

(R) “Bond-Itis” sounds like a disease you’d contract from contact with 007.  Nothing a penicillin shot won’t cure. 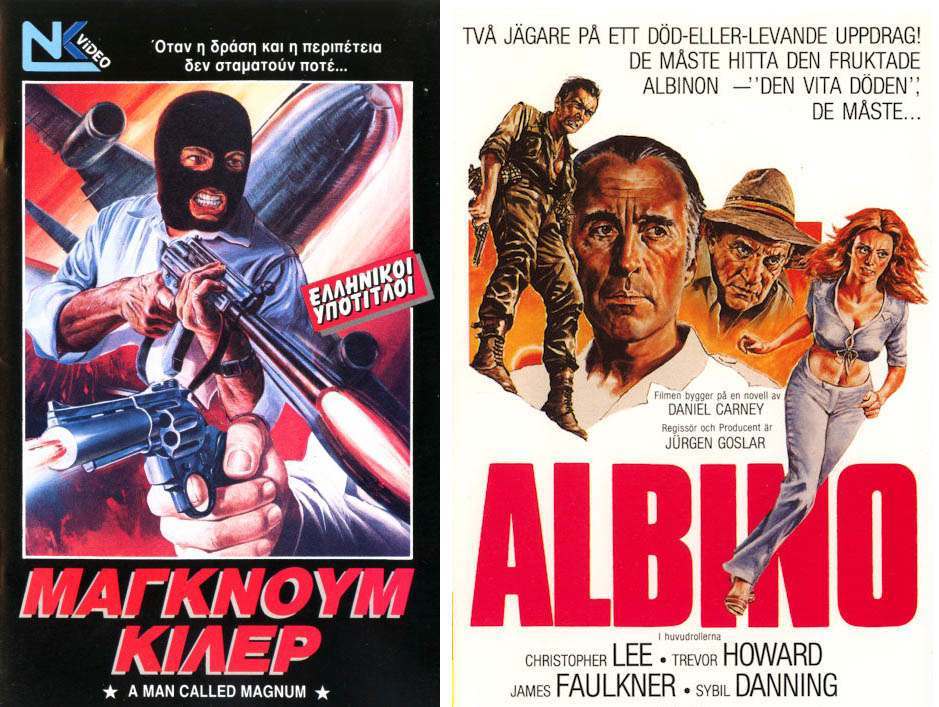 (L) They really want you to understand, in no uncertain terms, there will be ample gun fights in A Man Called Magnum.

(R) I have never seen Albino (AKA The Night of the Askari and The Whispering Death), but it stars Christopher Lee and Sybil Danning, so I’m all in. 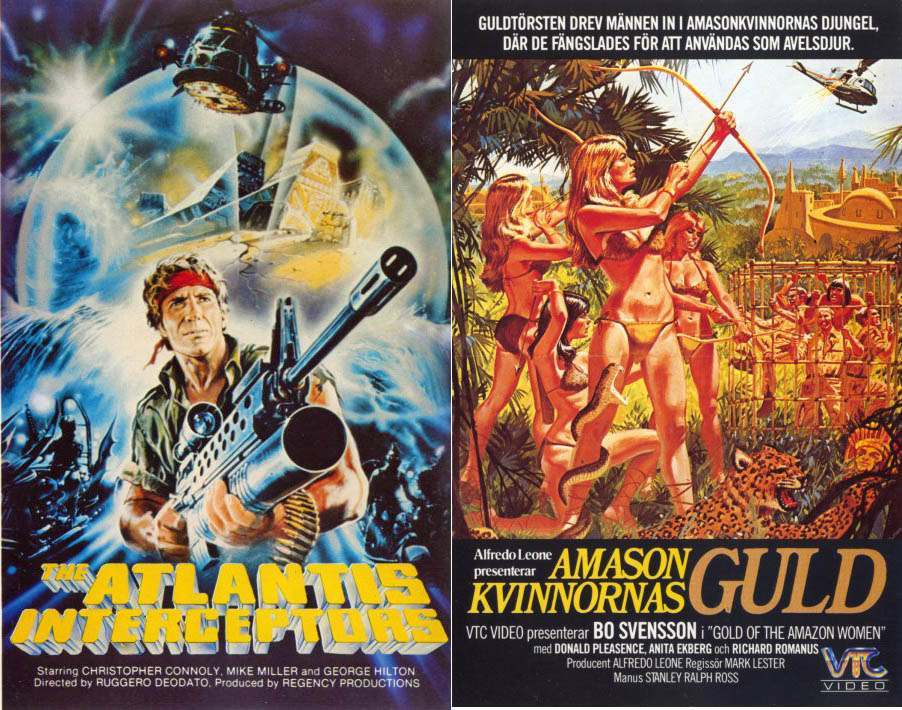 (L) What do you expect from an action film cover – yet, the Swedish VHS level of firepower is still something to behold.

(R) I suspect those renting this film weren’t interested in seeing Donald Pleasance.  There should be more movies featuring scantily clad Amazon babes shooting down helicopters. 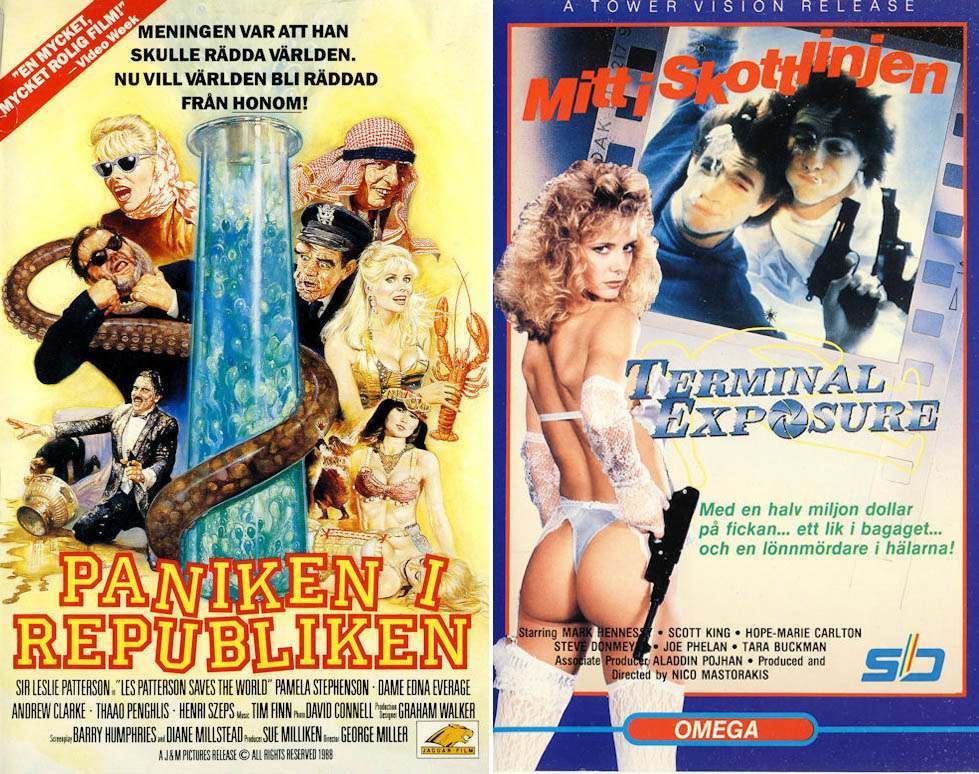 (L) Les Patterson Saves the World (1989) probably falls more into the comedy genre than action.  Words fail me as I attempt to describe this colossal flop – all I can do is recommend you watch the trailer  (and then sit quietly for the next hour trying to make sense of what you just saw).

(R) ….And speaking of low moments in cinema history – I give you Terminal Velocity.  When the only redeeming aspect of a film is a G-string, you know you’re in trouble.  Featuring Isaac the bartender from the Love Boat as a hobo. 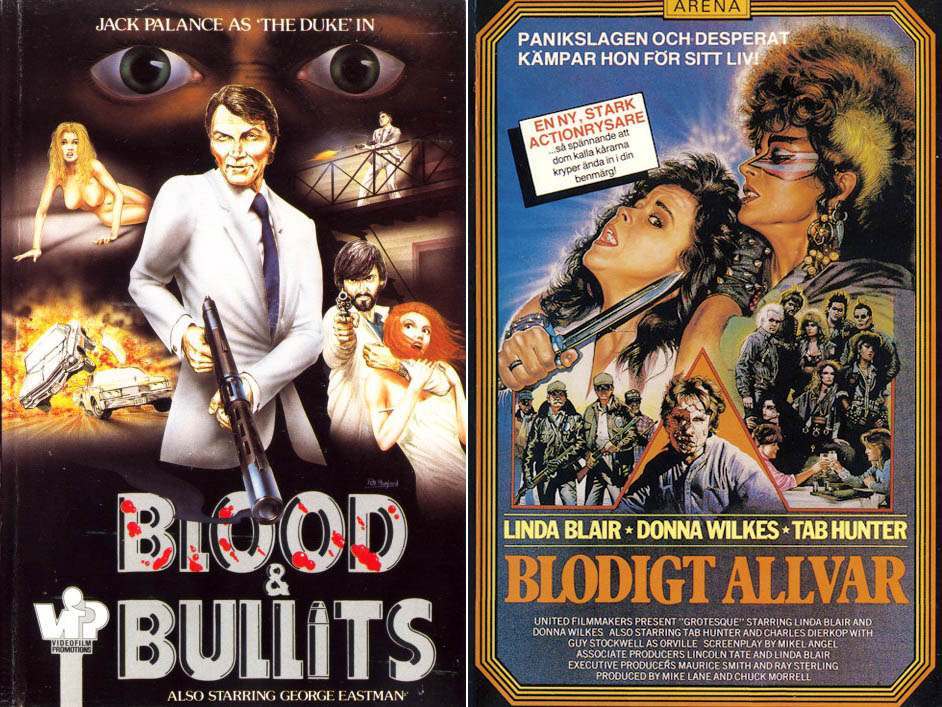 (L) If you haven’t watched an Italian crime movie from the 1970s (AKA poliziottesco-noir films) , you haven’t seen action movies at their finest.  Brimming with badasses, boobs and body counts, these flicks always deliver – but I’m guessing this one with Palance as “The Duke”, things get kicked up even a few more notches.

(R) Blodigt Allvar = Bloody Serious.  This is the 1988 Linda Blair movie Grotesque, where she’s attacked by a group of marauding punk rockers.  See the trailer here. 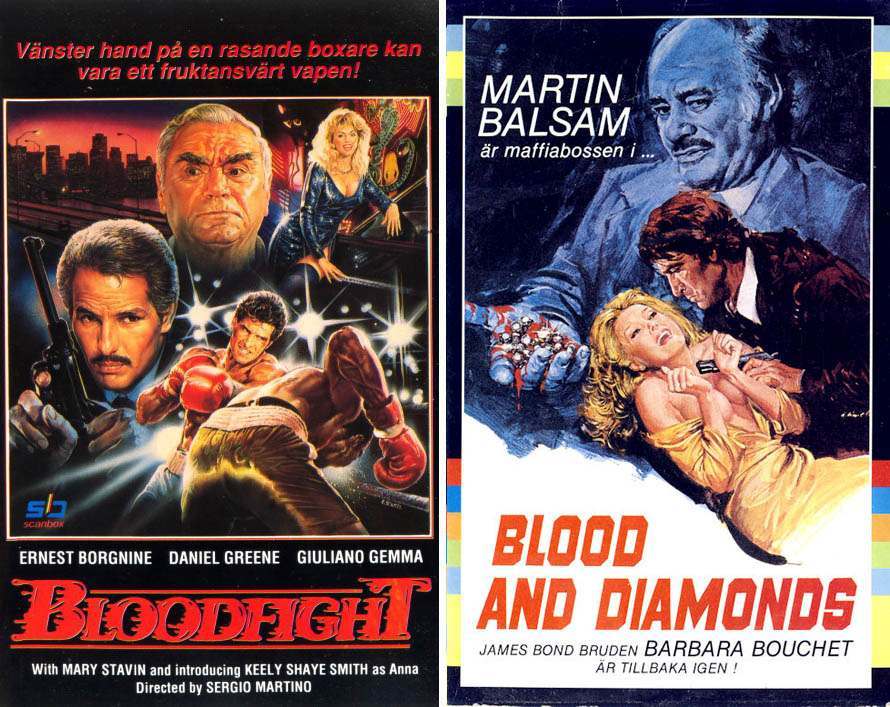 (L) This mosaic illustration is just incredible.  Soon to be my desktop wallpaper – despite the giant Borgnine head.

(R) Barbara Bouchet in yet another “diamond” titled action movie.  I can’t help but wonder if they were trying to connect to Diamonds are Forever… and using Bouchet, who played Ms. Moneypenny in Casino Royale, supplied another Bond link. 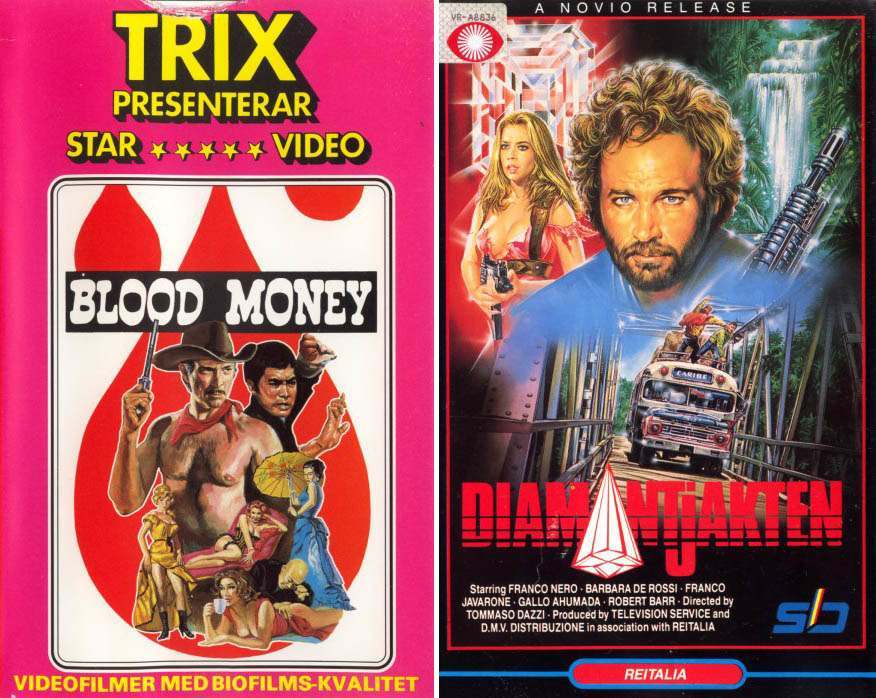 (R) Yet another “diamond” movie – this one featuring a violence atop a moving bus, a big breasted gal with an Uzi, and… a beautiful waterfall. 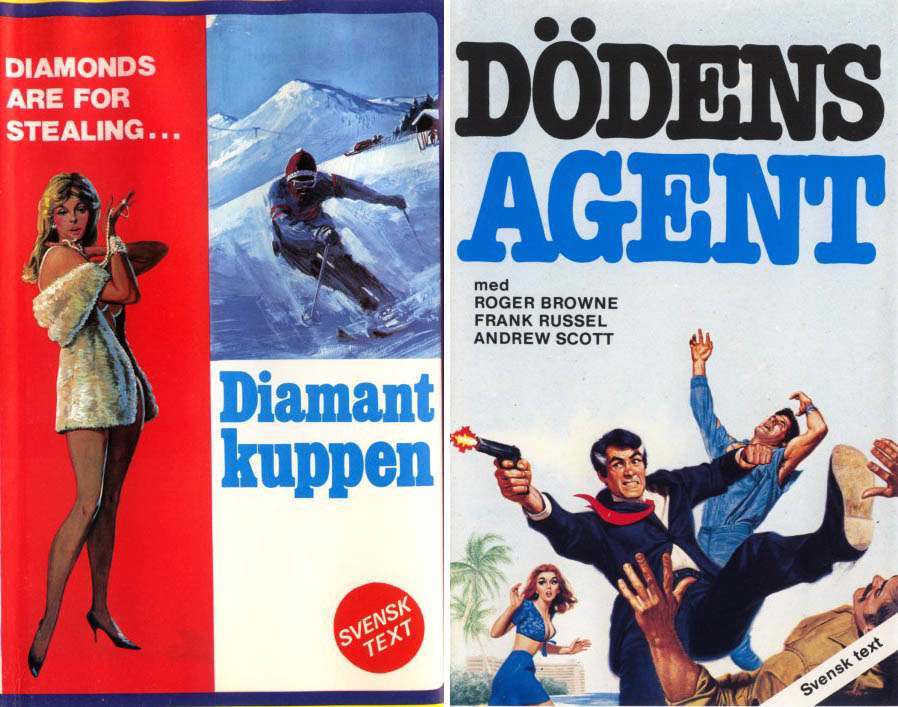 (L) Dear God – yet another “diamonds” movie!  We should start keeping count.

(R) A simultaneous punch, kick, and gun shot.  Let’s see 007 do that!  (Of course, “Death Agent” missed wildly, killing an innocent bystander, but that’s neither here nor there.) 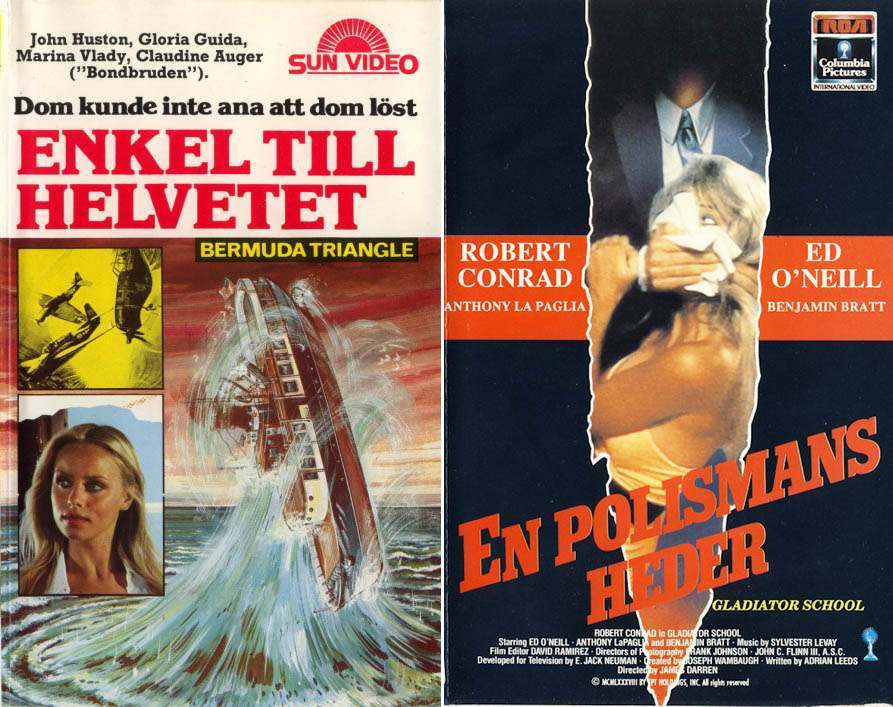 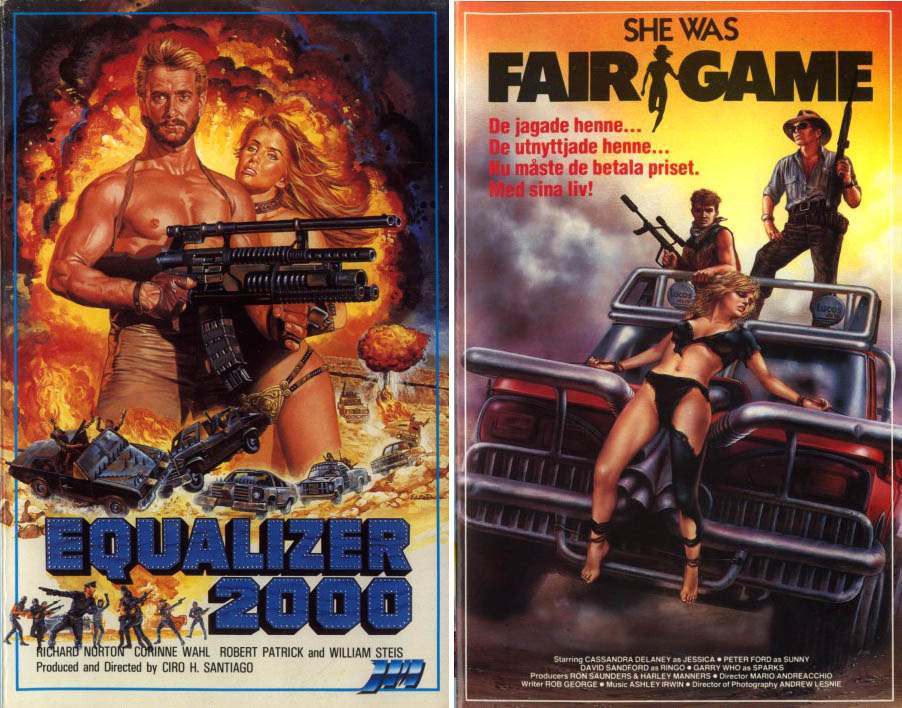 (L) You may remember this one from a previous article: 10 Wonderfully Insane VHS Action Movie Covers.  Highly recommended reading. 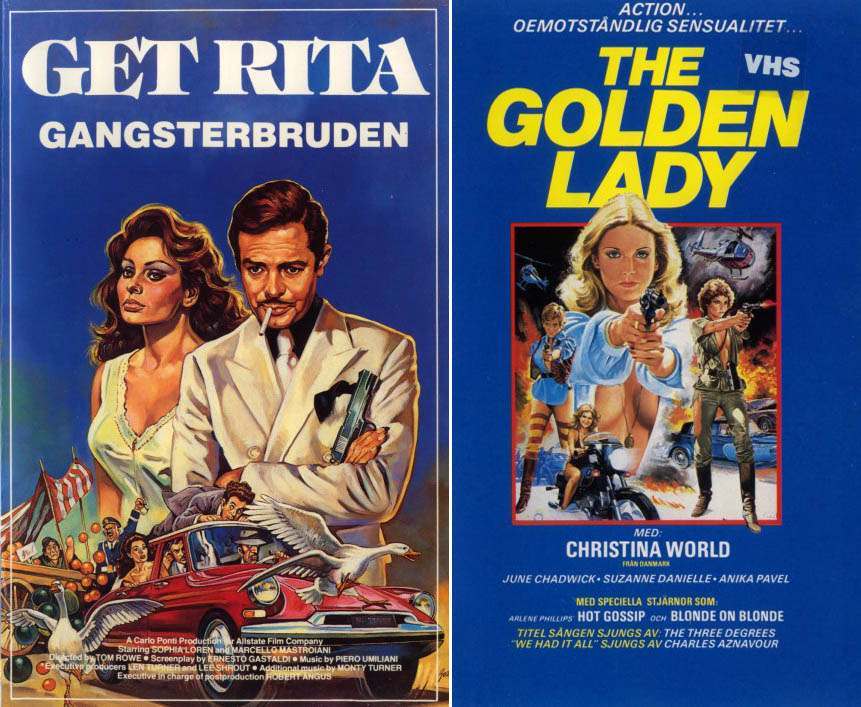 (L) Below – the trailer for “Get Rita”.  Cars are crashed, vegetable stands toppled, women punched, and songs are sung terribly.  Press play at your own peril.

(R) The Golden Lady had a killer soundtrack.  Listen here. 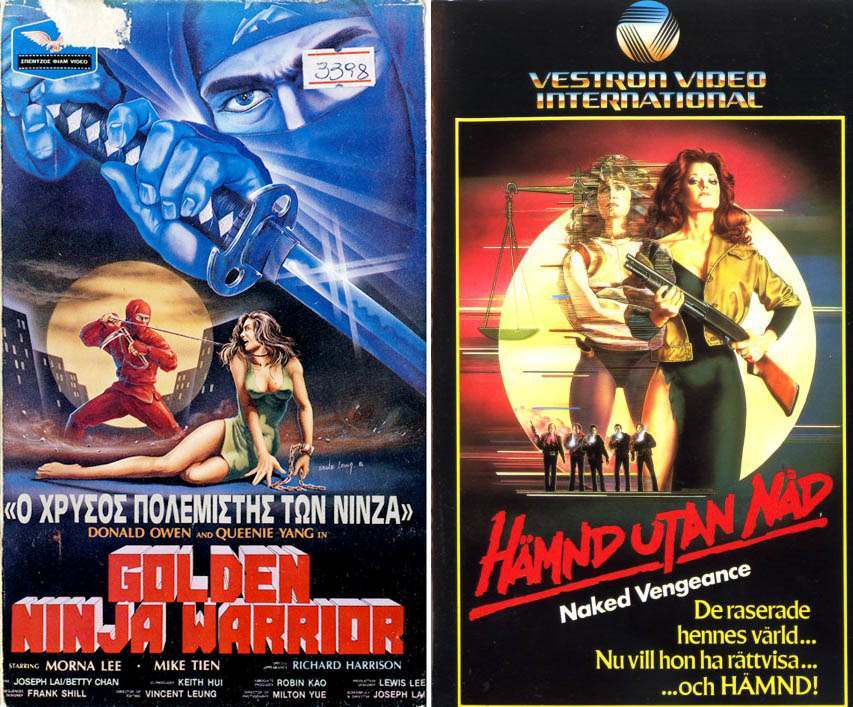 (L) Featuring the ninja stylings of Richard Harrison.  (Yes, you read that right.)

(R) Naked Vengeance trailer below.  Like Rambo, she is a one-man army. 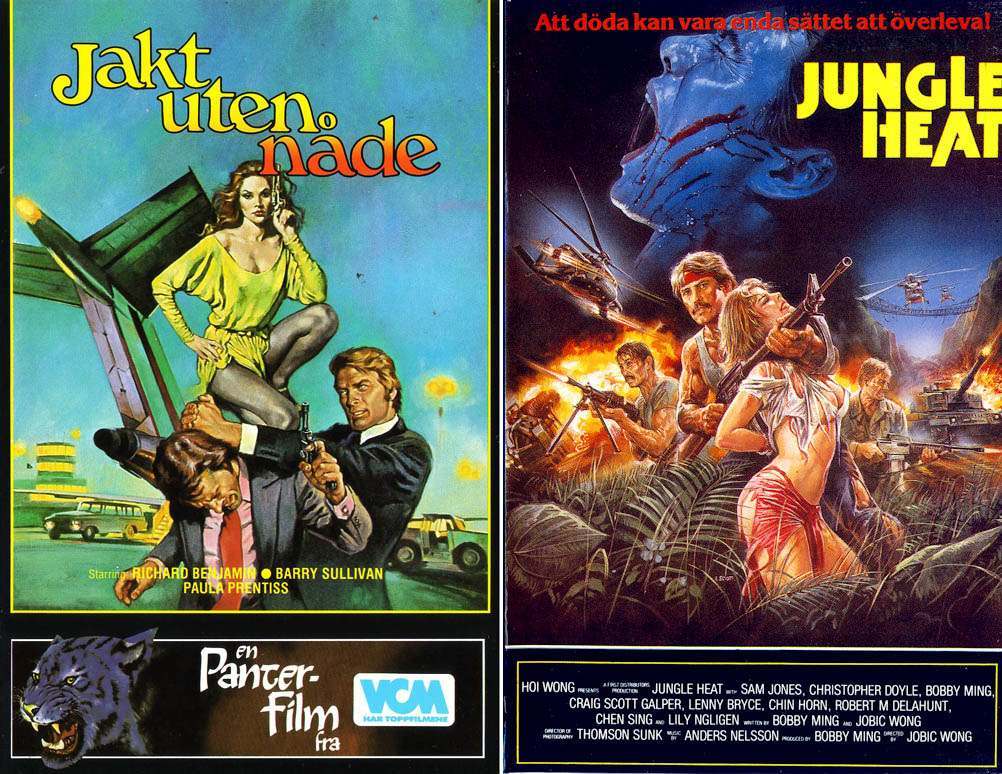 (L) Another TV movie repackaged for Sweden.  This was originally No Room to Run.

(R) If I’m not mistaken, this is a Taiwanese martial arts film deceptively repackaged to look Western.  No matter how promising these VHS covers looked, you never knew what you were going to get.