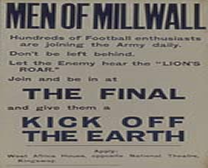 GEORGE Orwell famously described international sport as war minus the shooting, and nowhere in English sporting history is this more conspicuous than when England play Germany at football.

“Two World Wars and One World Cup” was the playground song of the late Sixties and early Seventies. Or as Frank McGhee of the Daily Mirror put it on the eve of the 1966 final: “If, on the morrow, the Germans beat us at our national game, we’d do well to remember that, twice this century, we have beaten them at theirs.”

Since then, the theme has never really gone away, from the Carling Black Label dambusters football ad and the Daily Mirror’s “Achtung! Surrender!” front page in Euro 96, to the Battle of Britain aircraft impersonations at Wembley and beyond. Not that it ever seemed to have ay effect. “All that stuff about war, Panzers and Stukas doesn’t bother us,” says Franz Beckenbauer. “We leave that to the English.”

England is not the only country with a Germany problem. The Dutch are famously hostile, and before the Euros this year a Polish tabloid ran a picture of the team’s coach holding the severed heads of Germany’s national trainer and team captain and demanded their slaughter. But the big one remains Tommy versus Fritz – and that one goes back nearly 100 years.

The morning after England’s triumph in Berlin, it’s still shocking to see posters from a century ago, when war was dressed up as sport, rather than the other way round. “To Berlin!” urges one, promising, “good shooting and hunting” (of the Hun) and ammunition thrown in free.

Another shows how football was used as a recruiting sergeant in the Great War (there were even regiments made up of professional players, who fought in the trenches with the other soldiers (and didn’t to bring their wags). “Hundreds of Football enthusiasts are joining the Army daily,” it cheerily explains, before encouraging the men of Millwall to let the enemy hear the “Lion’s roar” as a prelude to giving them “a kick off the Earth”. 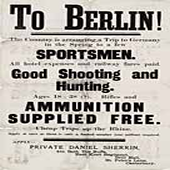 Last night there was a small but poignant gesture of reconciliation, when Bert Trautmann was honoured for “his life work to football and his work promoting better understanding between nations”.

When it comes to “medals on the table”, Trautmann famously won the FA Cup in 1956 while playing with a broken neck in the final. The same year he was voted player of the year in England. Before that, however, he won medals of a different sort. Five in all, including the Iron Cross, after three years on the Eastern front. His football career in England resulted from becoming a POW and electing to stay in Britain after the war.

Bert (or Bernhard, to give him his German name) has expressed his appreciation of the way that he was taken to the hearts of the people of Lancashire, and the legacy of his time in England is the Trautmann Foundation, which aims to improve Anglo-German relationships through football.