WITH J.J. Abrams’ Star Wars Episode VII in the pipeline comes the news that Harrison Ford, Mark Hamill, and Carrie Fisher will reprise their iconic roles in the George Lucas franchise for the first time in over thirty years, since 1983’s Return of the Jedi.

What impacts have time and ageing had upon courageous Empire-busting rebels Han Solo, Luke Skywalker, and Princess Leia?

None of us will know the answer for certain until late 2015, but in the meantime we can reflect on the following five feature films which also focus, in large part, on the graying of their larger-than-life heroes, or – what some critics have termed over the years – the adventures of the “over-the-hill” gang. 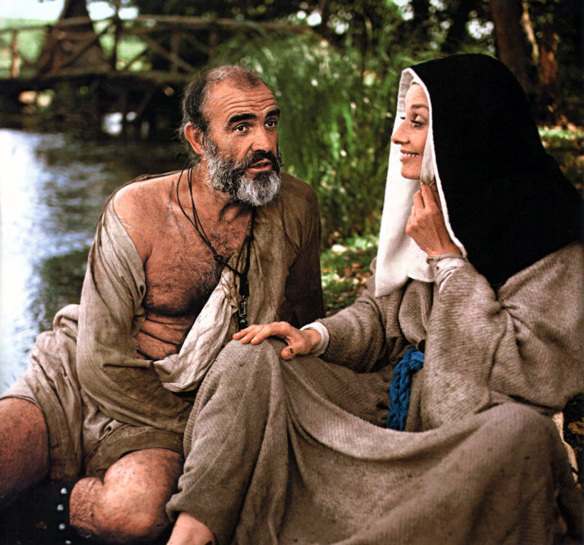 In this film from director Richard Lester, the great Robin Hood (Sean Connery) has spent twenty years away from Sherwood Forest, loyally following King Richard the Lion-Hearted (Richard Harris) in the Crusades.

After Robin’s refusal to obey one of the King’s more questionable orders, and then Richard’s untimely death, Robin at last returns home to England, only to find that he has become the very stuff of legends.

Meanwhile, Marian (Audrey Hepburn) has become a nun, and the Sheriff of Nottingham (Robert Shaw) is up to his nefarious old ways. Robin is called into action one last time, and though he defeats again his nemesis of long ago, all does not end well for the hero and his maiden.

Robin and Marian (1976) reveals Robin Hood as a man who is older and slower than we have seen him before, and who must grapple with his legacy.

Is he the hero of folk songs and stories?

Or is Robin just a mortal man who will succumb to aging like the rest of us, and only desires a measure of happiness with the woman he loves?

In the end, Robin and Marian provides an emotional ending for the hero and his noble lover, one that appears as legendary and romantic as the rest of his tale. The lovers’ bodies may die, but their story will soar forever, defying gravity, as it were.

The film’s possible message? It’s better to be remembered as you were — in all your glory — than to go on living in increasingly diminished capacity.  Especially when your immortality — as a story — is assured.

So write a great last chapter for yourself (and your lover).

Admiral James T. Kirk (William Shatner) undergoes a mid-life crisis in this 1982 sequel from director Nicholas Meyer. As the tale commences, Kirk has surrendered his “first, best, destiny” as a starship captain, and taken an earthbound job at Starfleet Command.

Adding insult to injury, Kirk’s eyesight is worsening, and Dr. McCoy (DeForest Kelley) gives him a pair of unattractive, corrective eye-glasses for his birthday.  Kirk has also foreclosed on even the opportunity to change paths at this late date in his life.  “Galloping around the cosmos is a game for the young,” he tells Uhura (Nichelle Nichols), Sulu (George Takei) and Dr. McCoy after the Kobayashi Maru training simulation.

When the long-exiled despot and criminal Khan (Ricardo Montalban) hijacks the starship Reliant, and attempts to steal the top-secret terra-forming device called Genesis, Kirk assumes command of the Enterprise from his friend, Captain Spock (Leonard Nimoy), but must grapple with additional indignities of old age, namely his rustiness in the centre seat — which permits Khan to get the jump on him in their first engagement — and the existence of a son, David Marcus (Merritt Buttrick), that Kirk never knew he had.

Following Khan’s defeat, and Spock’s death and act of noble self-sacrifice, Kirk gets a new lease on life, and says that he feels “young” again.

Spock’s gift of lift to Kirk — and to the Enterprise crew — has shaken the Admiral from his existential crisis Kirk is no longer concerned about the life that “could have been…but wasn’t” as he declares with resignation in the Genesis Cave. Contrarily, Kirk ends the film musing on Spock’s optimistic axiom that “there are always possibilities.”

So the message in Star Trek II no doubt, is that even with the pain of ageing and growing old, there remain opportunities for adventure, and life.

We’re only as old as we feel.  So choose to feel…young.

Sean Connery returned to the role of James Bond, agent 007, in this film from director Irvin Kershner.  Unlike the canon Bond series, this loose remake of Thunderball (1965) decided to embrace reality and acknowledge the fact that Bond had indeed aged since his memorable adventures in the swinging sixties And that, on top of that, the world around Bond had changed dramatically too.

With his penchant for “gratuitous sex and violence,” this ageing Bond was viewed by the new M (Edward Fox) as a “dinosaur.”  His armorer, Algy (Alec McEwen) also described well how time itself had passed 007 by:  “Bureaucrats running the old place.  Everything done by the book.  Can’t make a decision unless the computer gives you the go ahead.  Now you’re here….”

Bond is called out of semi-retirement — and from a retreat to a health spa to get back into shape — when a man named Largo (Klaus Maria Brandauer) steals two nuclear weapons and threatens to blackmail the world.

As an older man, Bond must now face a change in his professional modus operandi. He no longer bounces back quite so quickly, and his body has the bruises to prove it.

The idea of James Bond ageing (both gracefully and not so gracefully…) adds a layer of real human interest to the film that makes it more than mere remake. Bond still boasts his edge; but it is it sharp enough — in his mid-50s — to get the job done?  That’s the movie’s big question, and Connery is terrific at playing the same man we love and remember from the Bonds of the sixties, but now some time down the road towards mortality; when he has more yesterdays than tomorrows ahead of him.

Never Say Never Again also sets up another dynamic comparison about ageing, one between the gruff, physically-adroit Bond, who uses his pain to maintain his “edge,” and the “computerized” villains, Largo — who plays violent video games — and Fatima Blush (Barbara Carrera), who prefers to detonate explosives by remote control. Bond’s approach is still superior to that of these armchair generals.

In the end, 007 himself gets the final word on his ageing, and voices the film’s commentary on growing old. He gazes at his old Bentley, and a valet says, admiringly, “They don’t make them like they used to.” 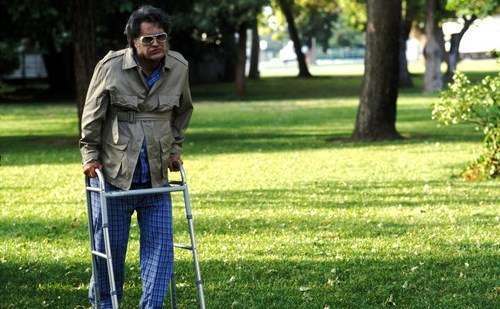 In this film, an elderly Elvis long ago gave up fame and fortune for life as an “everyman” named Sebastian Haff.  He now lives — with cancer on his penis — in a Texas nursing home called Shady Rest. There, Elvis suffers all the indignities of being old, and worse…being forgotten.

But when a soul-sucking Mummy decides to turn the old folks’ home into a smorgasbord, Elvis — a Karate black belt — summons all his strength to fight back and save his friends.

Campbell is brilliant as Elvis, adroitly transforming the Boy from Memphis into the Old Man from Texas, and the film explicitly reminds viewers that even the aged and the infirm can be heroes.

Delightfully, Bubba-Ho-Tep transmits this message without giving Elvis some impossible reward for his service and heroism. Presley doesn’t get a fountain-of-youth-style regeneration (like the senior citizens of Cocoon [1985]), or even get turned into a kid again as in the Twilight Zone: The Movie (1983) segment “Kick the Can.”

At movie’s end, instead, the King simply gets a message from the Heavens telling him his work is done.

He is satisfied with that answer, and leaves the building…

Indiana Jones and the Kingdom of the Crystal Skull (2008)

The fourth Indiana Jones movie from Steven Spielberg finds an aging Indiana Jones (Harrison Ford) adjusting to life in the 1950s…and his own fifties as well. Because his father Henry and best friend Brody have passed away, Indy fears that he has entered the period of old age when life doesn’t give him things anymore.

Instead, life only “takes them away.”

When Indy undertakes a dangerous quest to return to a mysterious crystal skull to the lost city of Akator in Peru, he learns his assumption was mistaken.  He goes in search of a city of golden treasure, but learns that the treasure found there was, in his words, “knowledge.”

For Indy, the treasure is actually self-knowledge, because in undergoing this particular quest he reconnects with his long-lost love, Marian (Karen Allen), and learns that, like Admiral Kirk before him, he has a grown son: Mutt (Shia La Beouf).

Suddenly, life is no longer taking things away for Indiana Jones, but giving him things…a wife and a son.

Accordingly, the film ends with Indy’s marriage to Marian, and though it acknowledges the melancholy nature of growing older, Indiana Jones and the Kingdom of the Crystal Skull also suggests that an older Indiana Jones – much like an older James Bond – still has all the right moves.

Just when you think the torch is about to be passed to Mutt in the form of Jones’ fedora, the old man grabs it back.

All these films — Robin and Marian, Star Trek II: The Wrath of Khan, Never Say Never Again, Bubba Ho Tep and Indiana Jones and the Kingdom of the Crystal Skulls — remind audiences that even the greatest heroes, from James Bond to Captain Kirk — must face the deadliest of all nemeses: mortality.

In showing grace and determination, not to mention good humour, about the indignities of ageing, these heroes once more prove shining examples to the rest of us.