“I have nothing very nice to say about myself, but one thing I know, on my honour, I’m no philistine” – Adolf Hoffmeister, 1961, lawyer, artist, politician and author of The Animals Are in Cages, aka Unwilling Tourists (Czech: Turistou proti své vůli – 1941). 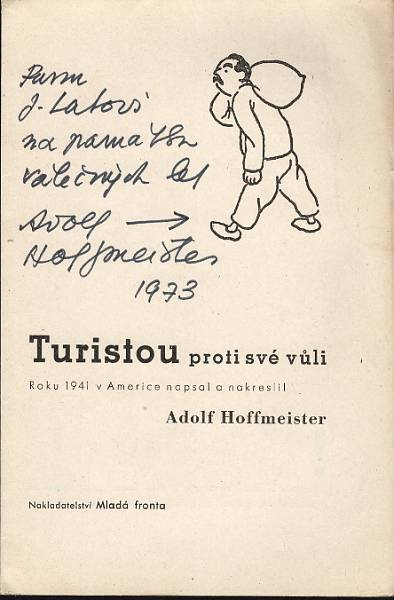 In 1939, Adolf Hoffmeister (August 15 1902 – July 24 1973) emigrated from his native Czechoslovakia to Paris, a city he had fallen for after his first visit in 1922. It was on that trip he forswore his legal career and vowed to be an artist. When France fell to the Nazis, Hoffmeister, an avid anti-fascist, was arrested and jailed in Paris’s La Santé prison – an episode he would recall in Vezeni (1969) – and later transported to Southern France and Morocco, where he was incarcerated in the Ain El Ourak concentration camp.

Hoffmeister and his fellow unwilling tourists arrived in Casablanca on June 27 1940, after a five day trip aboard the S.S. Lorient from Bayonne. We were “stuffed into buses and rocketed inland to a concentration camp at Ain El Ourak, on the edge of the desert because the Moroccan authorities simply did not know what to do with us all”, he wrote.

Hoffmeister escaped. Via Portugal and Cuba he made it to New York in 1941, where he worked as an editor in the Office of War Information, and as a broadcaster and editor of the Voice of America. 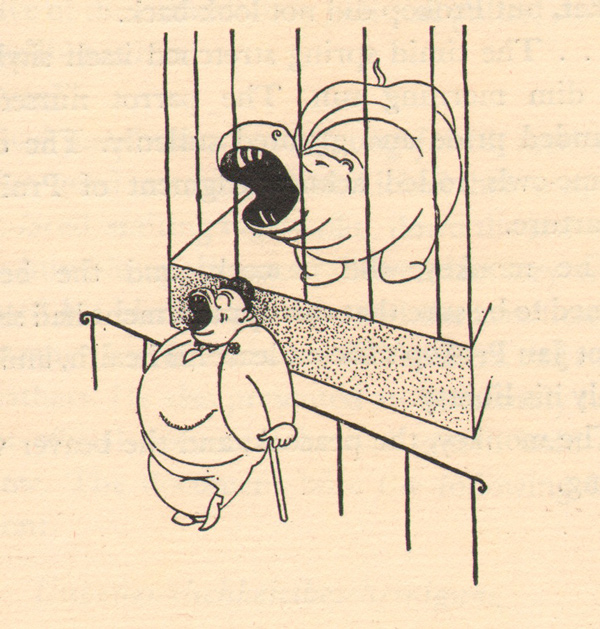 His new job built on his earlier experiences as editor of one of the main Czech daily newspapers, Lidové noviny (1928-30), the literary paper Literární noviny (1930-32) and the anti-fascist magazine Simplicus, an organ he created in the 1930s after the German satiric magazine Simplicissimus was banned by the Nazis.

So Hoffmesiter was in America when The Animals Are In Cages (aka The Unwilling Tourist) was first published, featuring both his words and drawings. The book is a semi-fictitious account of the protagonist Jan Prokop’s escape from Prague to New York. In it, the travellers ponder what it is to be refugee. From the inside flap, we read:

Many books have been written by refugees, and all have ground their axe of bitter tragedy almost to the exclusion of everything else; but not so with Hoffmeister. Here is the only one of them whose native fund of humor is still so great that he must take a laughing-stock of tragedy. ‘Laugh, clown, laugh,’ both pen and pencil insist. Yet at no single moment does Hoffmeister lose sight of the final tragedy of the uprooted — for he too has made the hopeless march. But he also made this book one of the most permanent and perfect indictments, both in word and in picture, of all those who have contributed to the creation and the torture of the Unwilling Tourist.” 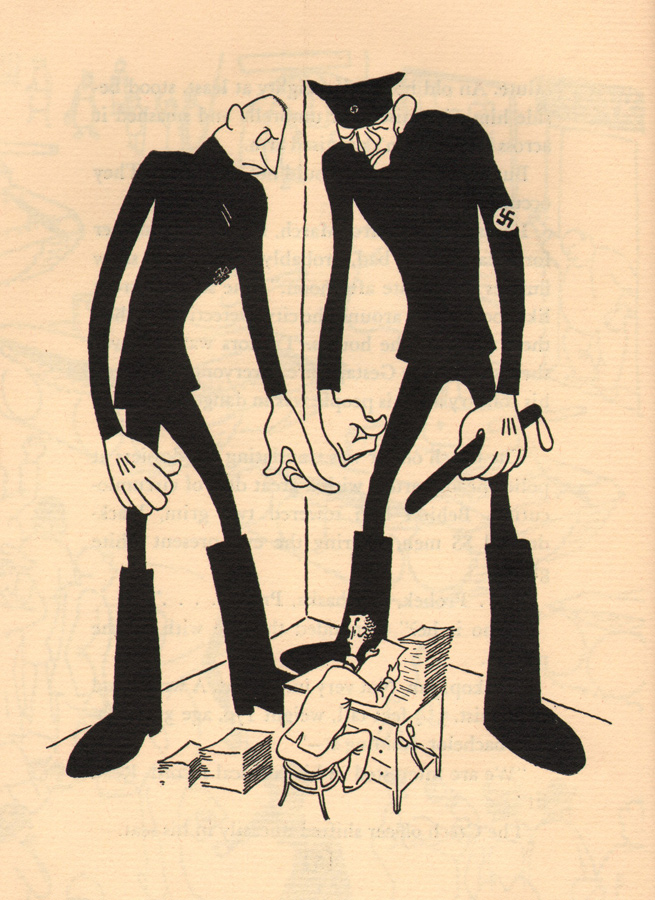 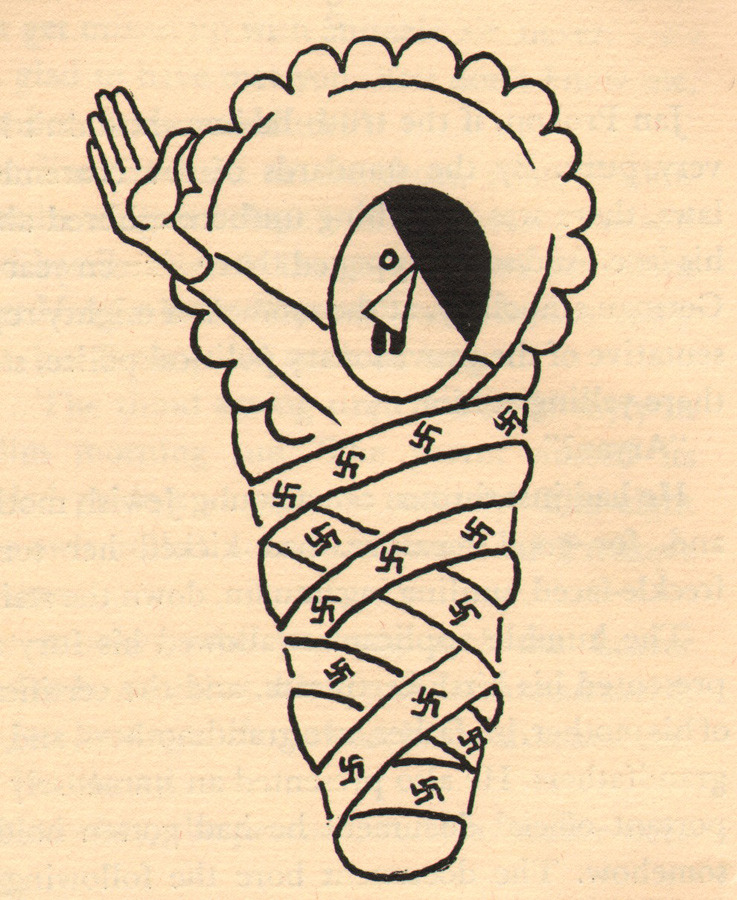 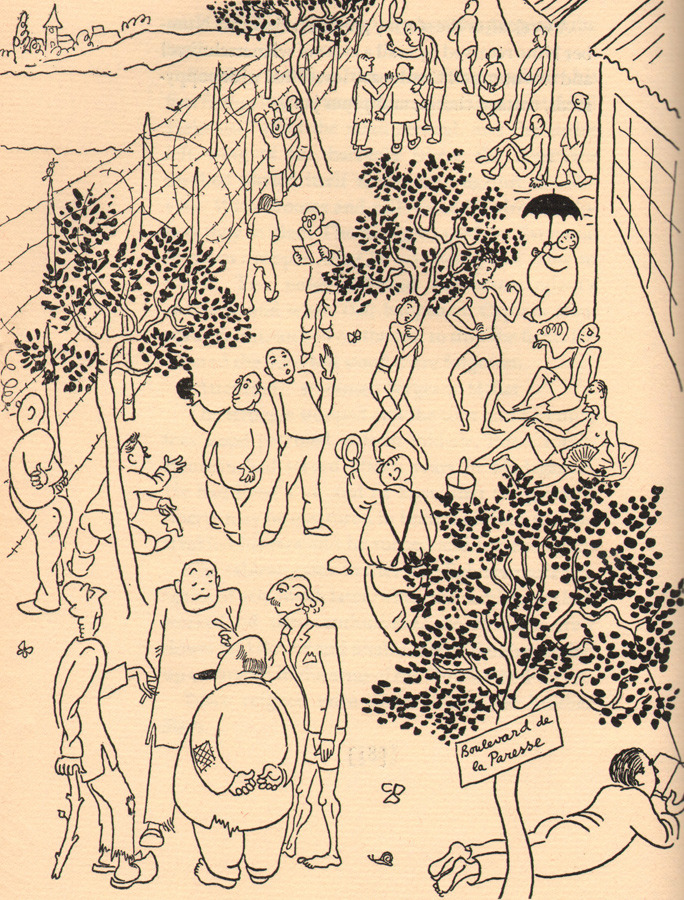 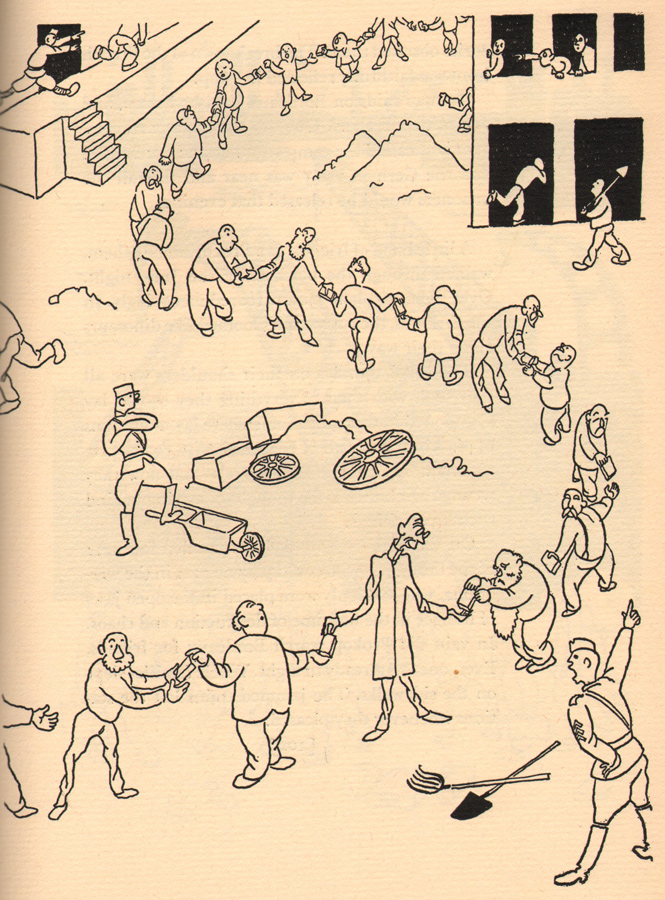 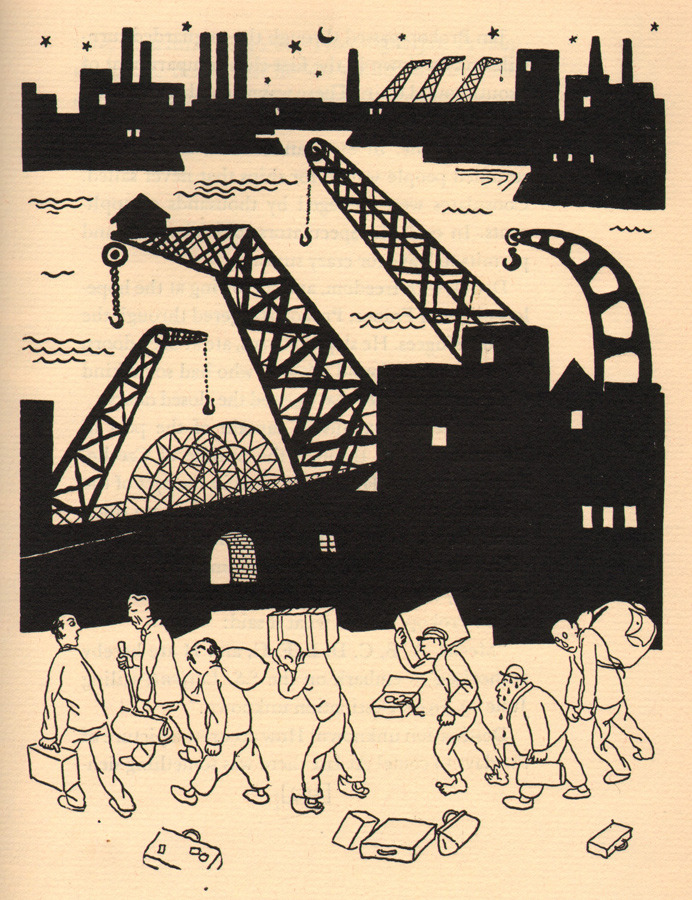 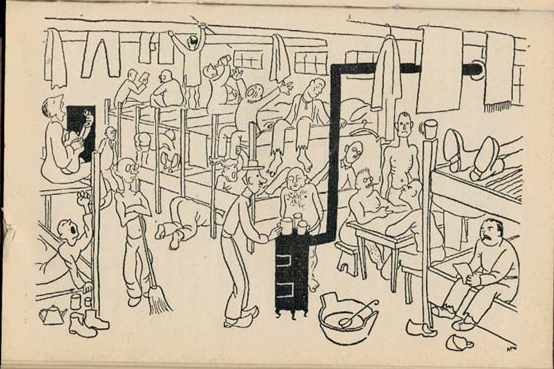 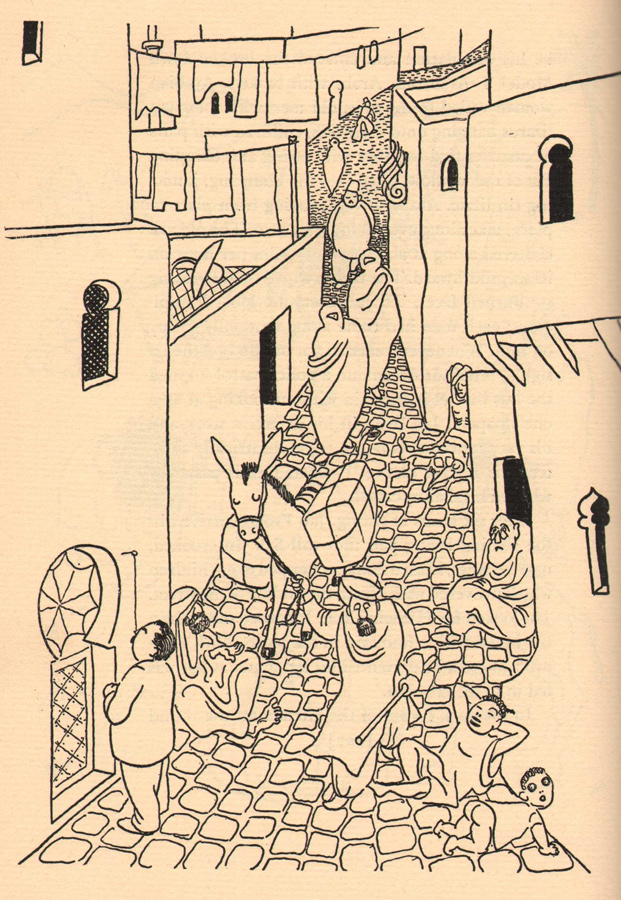 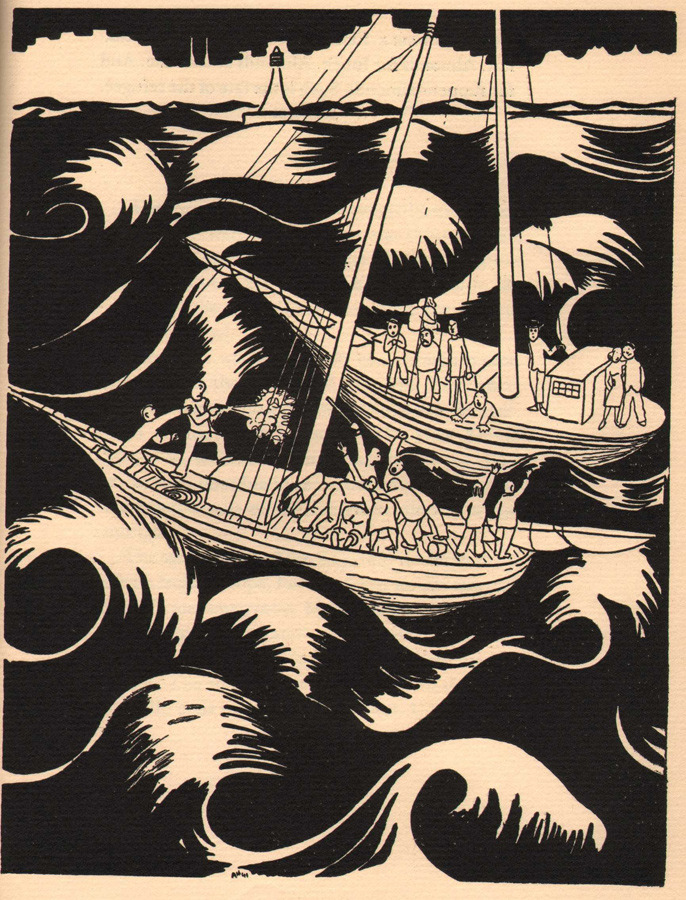 Also in 1938, Hoffmeister wrote the libretto for Brundibar, a children’s opera composed by Hans Krasa, for a state-sponsored competition. But the contest was called off and the opera was never performed in Prague. In the wake of the German occupation, Krasa, like many other Czech Jews, was deported to the Terezin (Theresienstadt ) concentration camp. “He took the libretto with him,” says Martin, “and the opera was performed at Theresienstadt 55 times.”

In 1944, a special performance of “Brundibar” was staged for representatives of the Red Cross who came to inspect the camp; they later wrote a positive report about the camp. “They even have opera there,” they wrote. 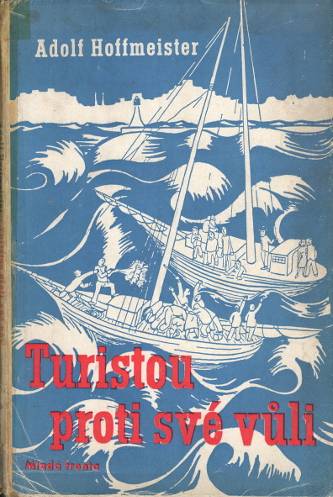 In 1945, Hoffmeister returned to Czechoslovakia, working for UNESCO. Three years later, following the Communist coup in February 1948, Hoffmeister was named French ambassador by the new regime but was recalled shortly after. After the Soviets invaded Czechoslovakia, Hoffmeister once again emigrated in 1969, but in 1970 decided to return. In 1973 he died at his home in the Orlický mountains, labelled a non-person – an unwelcome tourist in his own land.

Via: the terrific 50Watts.