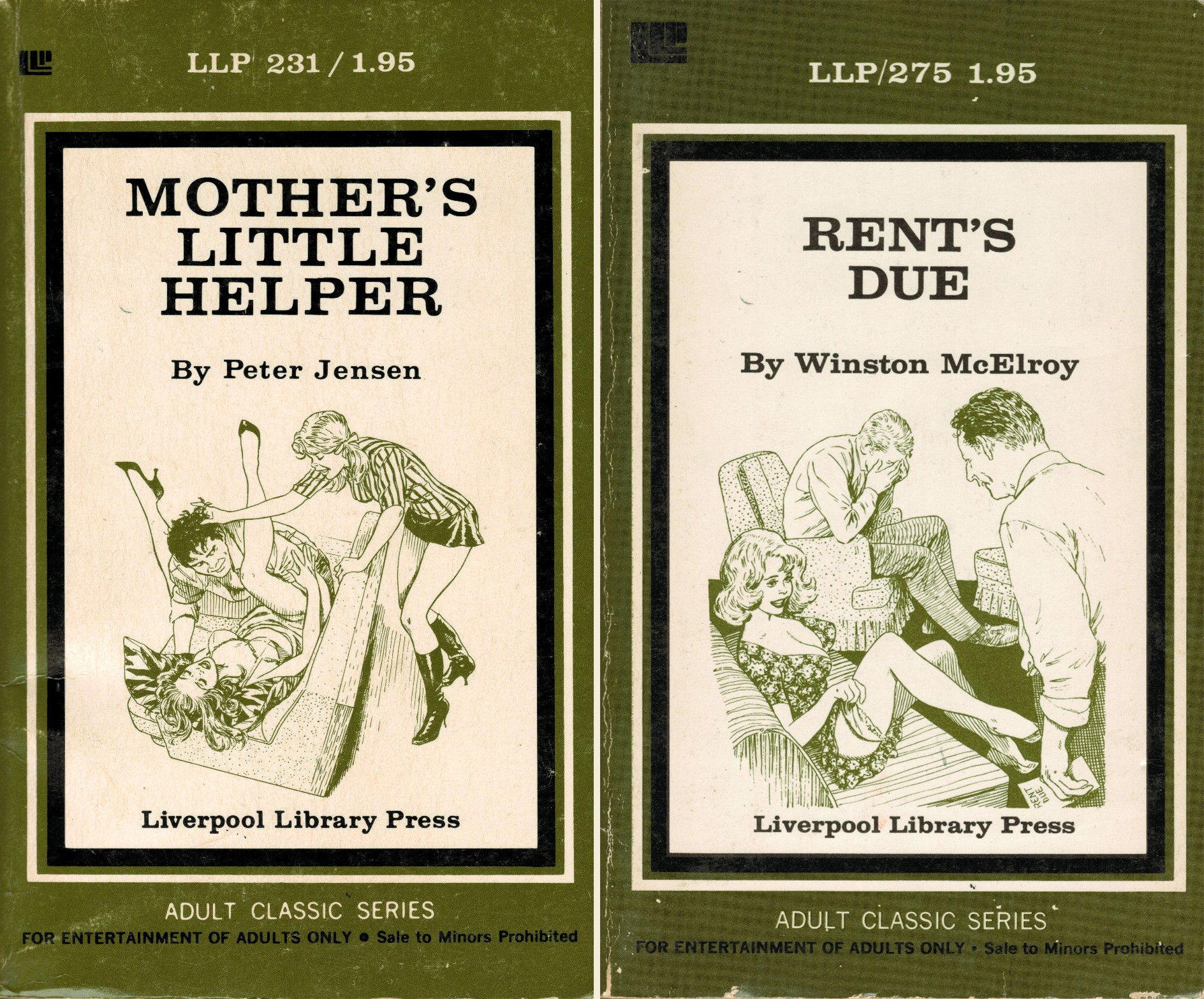 At first glance, they look like wholesome little children’s books from a bygone era…. but a second look reveals they are actually adult erotica of the most graphic and taboo-shattering variety.  Indeed, the books published by the Liverpool Library Press were designed to looked quaint and family-friendly at first glance, but were anything but.

So, what’s the backstory here?  What is this Liverpool Library, and why do their books look like something that would’ve been on a 1950s’ kid’s bookshelf? 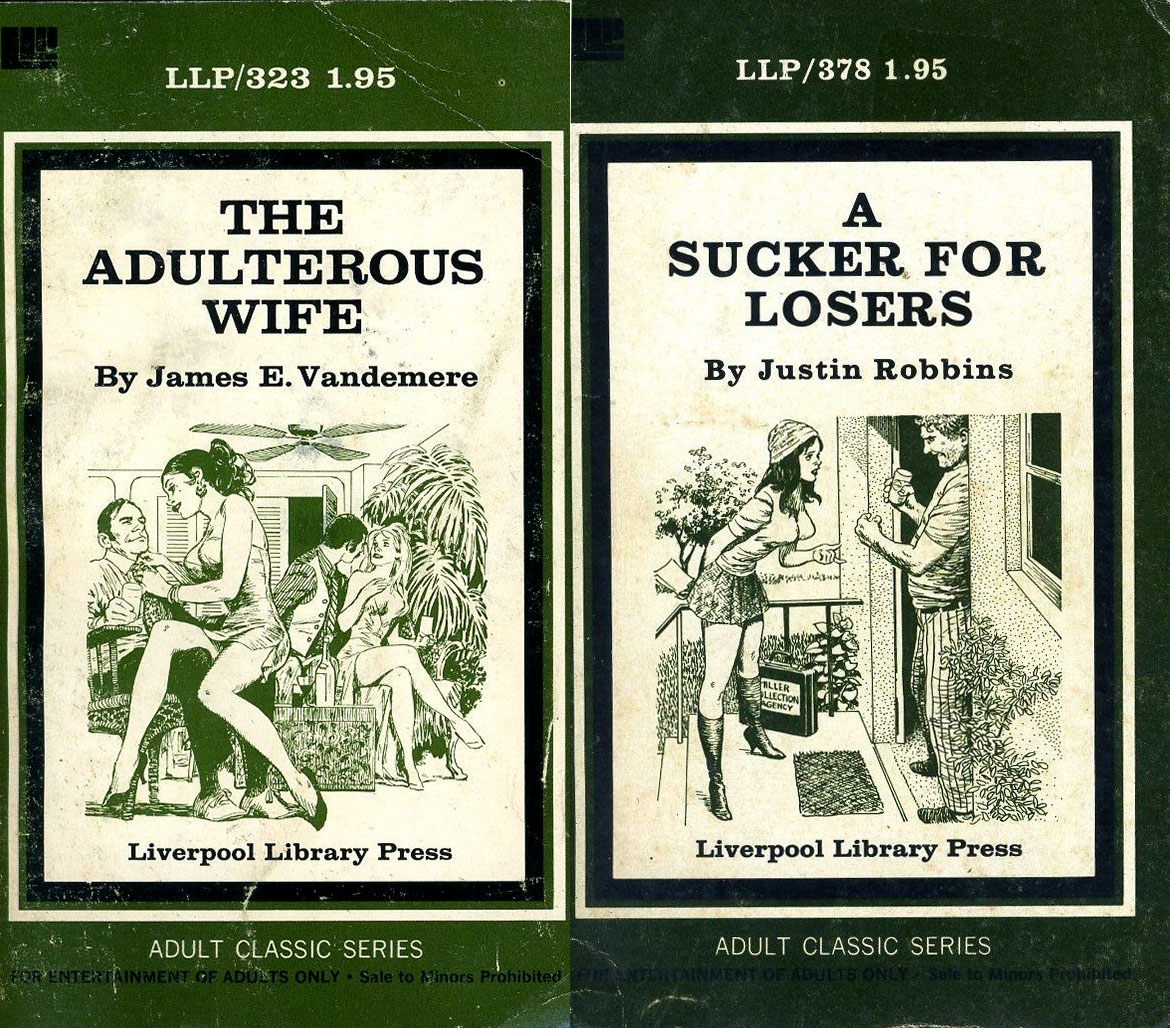 Soon after the US Supreme Court decided that Henry Miller’s works, Vladimir Nabokov’s Lolita, and Maxwell Kenton’s Candy weren’t actually pornography, the floodgates were opened to a tidal wave of erotica hitting the local bookstore shelves.  And there certainly were other cultural factors bubbling to the surface during this time which not only loosened legal regulations, but also loosened the stigma.

By the time the late 60s arrived, with its counter-culture mentality and Sexual Revolution, the censors were officially asleep at the wheel; it was “anything goes” at the bookstore as well as the cinema. 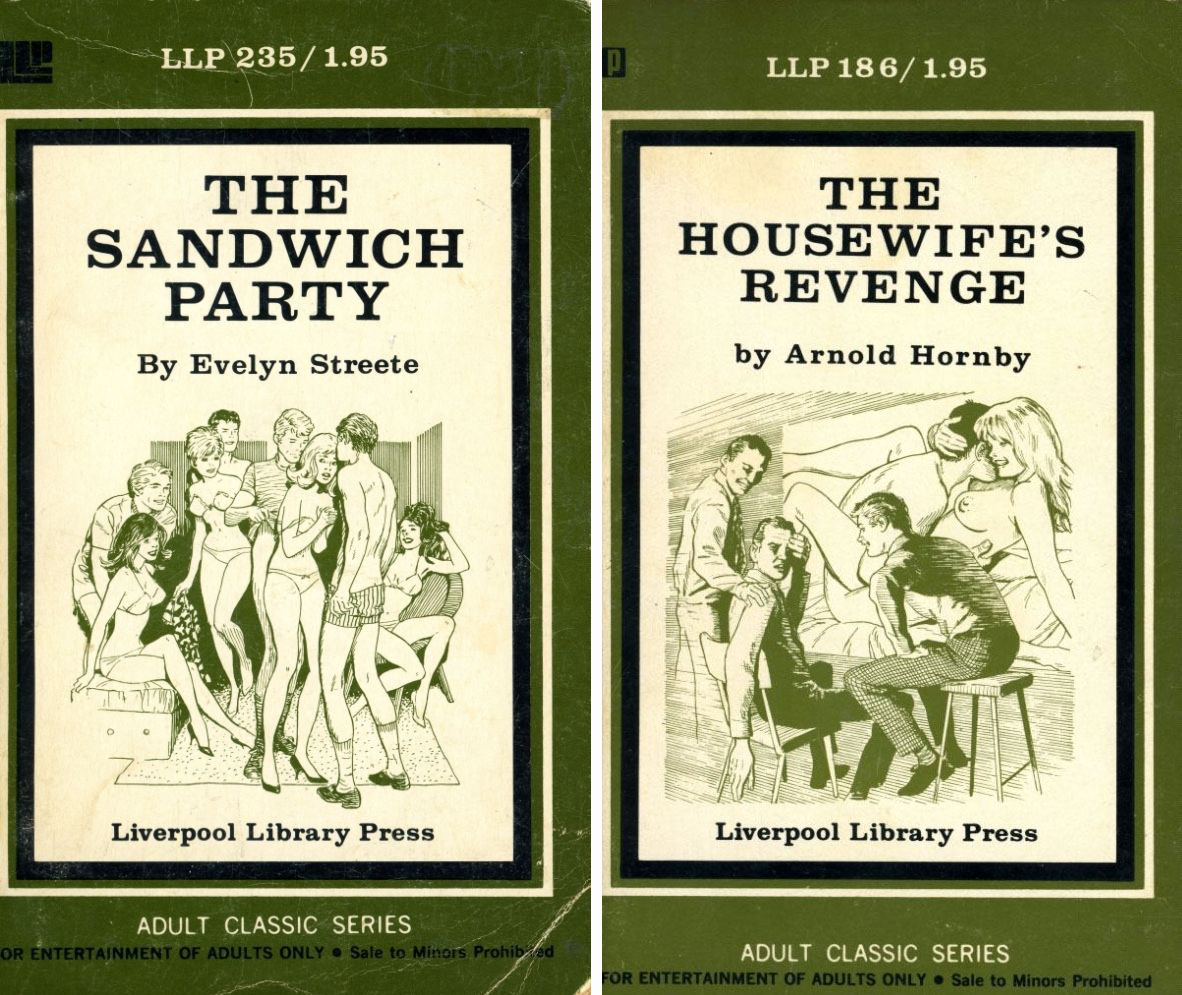 It was into this environment that the Liverpool Library Press (LLP) began.  In fact, LLP was the very first publisher formed specifically to produce hard-core adult books.  Certainly there were other publishers producing similar sleaze, but they had already been in business and simply adjusted their “focus”… LLP was literally born to be wild. 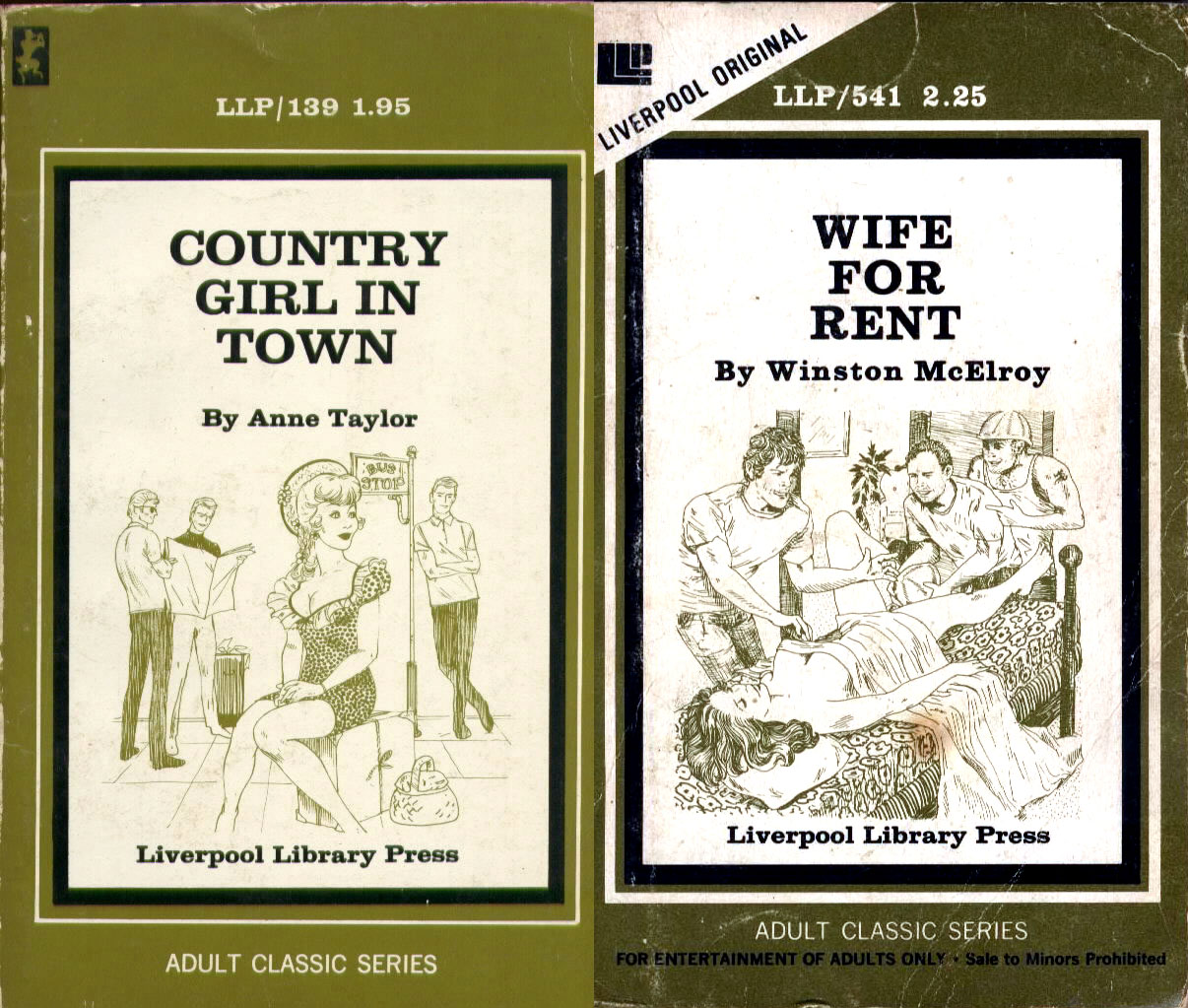 And unlike other publishers which relied on lurid and garish covers to sell their books (much like the pulp magazines of yore), LLP chose a more subtle style – an almost “classy” look inspired by the Olympia Press’ Traveler’s Companion series.

This series, from the 1950s, published such works as Sextet by Henry Miller , Naked Lunch by William Burroughs, Fanny Hill by John Cleland, Nabokov’s Lolita, and Story of O by Pauline Réage.  Olympia press more-or-less stuck to works that would get a bookseller fined or jailed in the United States; so, they were released in the more sexually liberated France….. but (and, here’s the rub) they were printed in English.  So, tourists from the U.S., visiting Paris, could purchase a copy of a work that would be illegal to sell back in the States.  Hence the name “Traveler’s Companion”.

And the link to the Liverpool Library Press – their covers were plane green.  Nothing garish, nothing shocking on the front… the naughty business was between the covers, not on the covers. 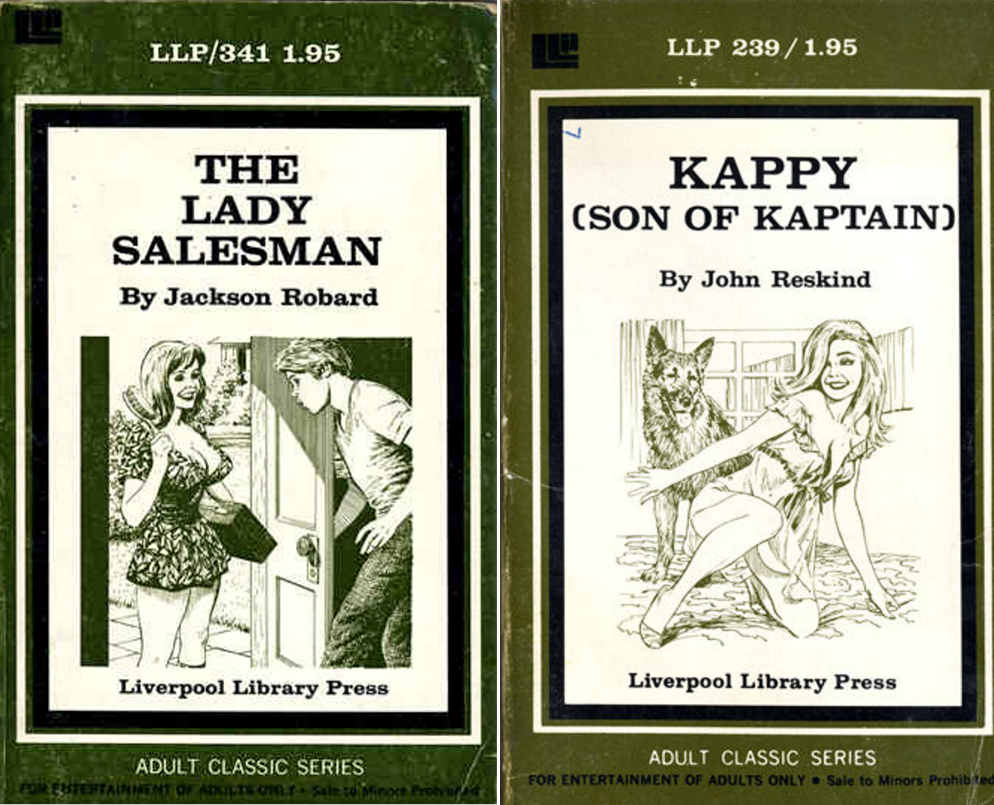 … Which is interesting, because LLP authors could write about some monumentally warped sleaze. 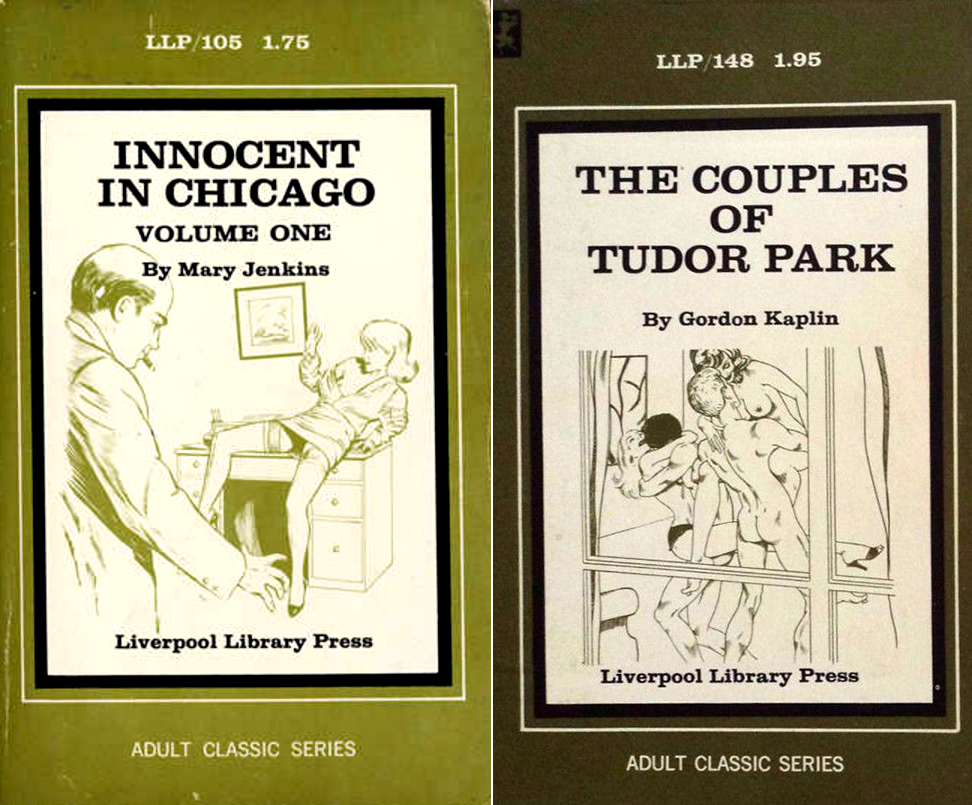 It wasn’t just your run-of-the-mill story-lines of wife-swapping and farm-girl promiscuity.  LLP works could venture into some troubling territory – namely incest, bestiality, and rape.  Thus, Olympia press has since become somewhat revered, while LLP will go down in history as nothing more than smut with above-average writing and mildly amusing covers. 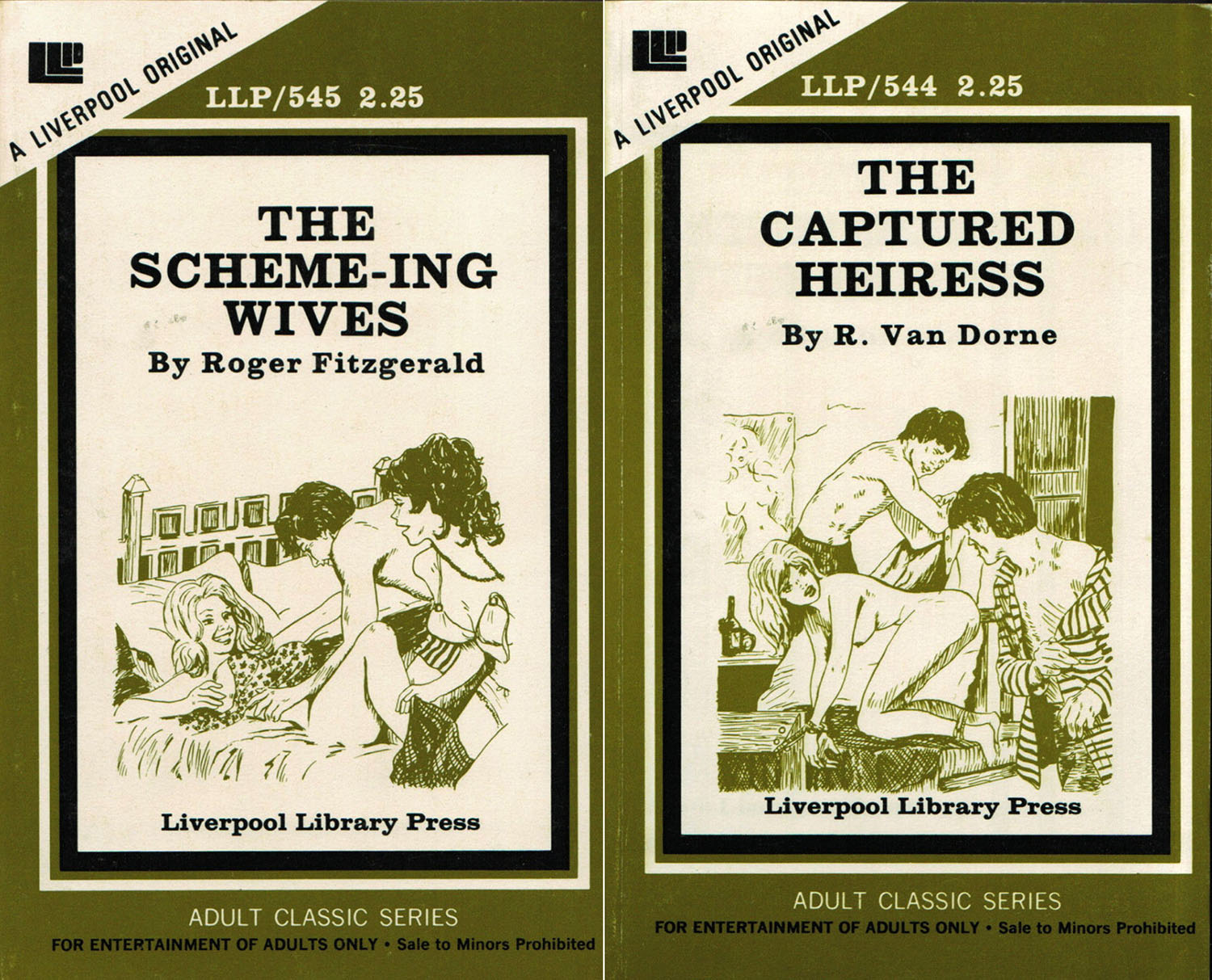 Interestingly, LLP wasn’t even a Liverpool based publisher.  The name was perhaps inspired by Olympia, which had a huge readership among UK seamen, and the founder(s) just decided upon an English port.  This was before Beatlemania hit, so that added hype was just a happy accident a few years after the company was founded.

LLP started its operations in California, then, oddly enough, moved to the Mediterranean island of Majorca.  The publisher even preferred its writers (for tax reasons) to relocate to work on the island. To add even more mystery, their copyright was always a Scandinavian address… 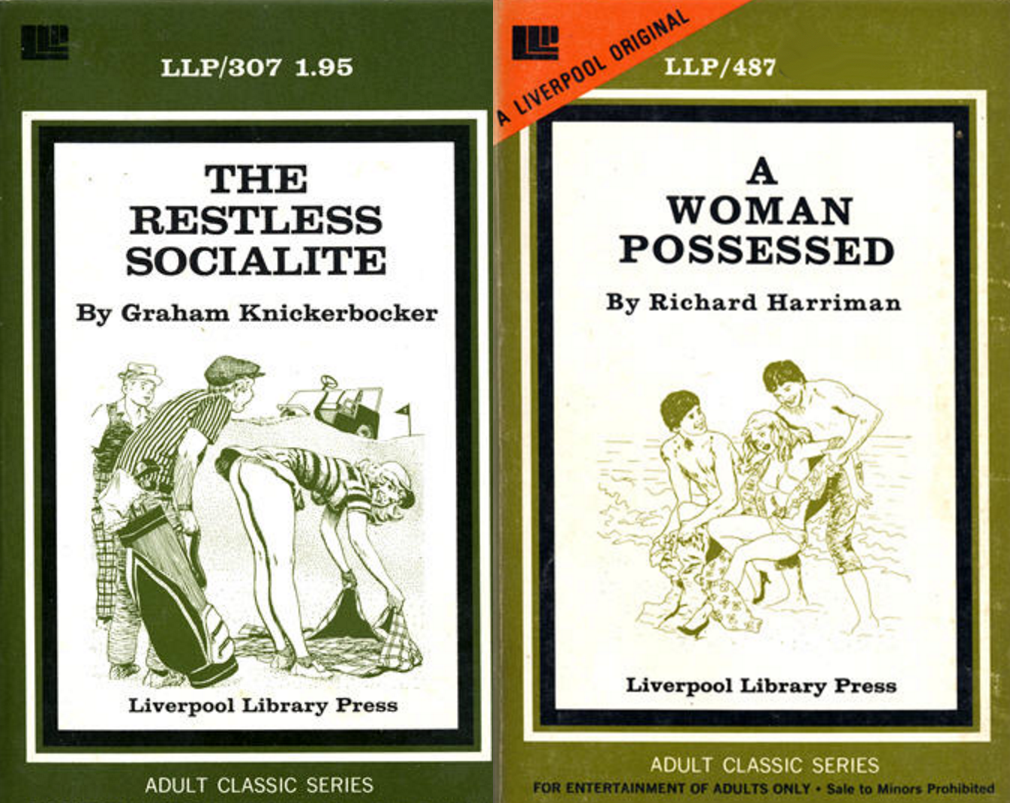 The address likely served two purposes: (1) to impede legal action toward LLP (a stateside address was a lot easier to prosecute than a possibly fictitious address buried in Denmark, and (2) the association with Scandinavia in the late sixties/early seventies was synonymous with sexual freedom; an address in Copenhagen was a definite “plus” for adult book consumers. 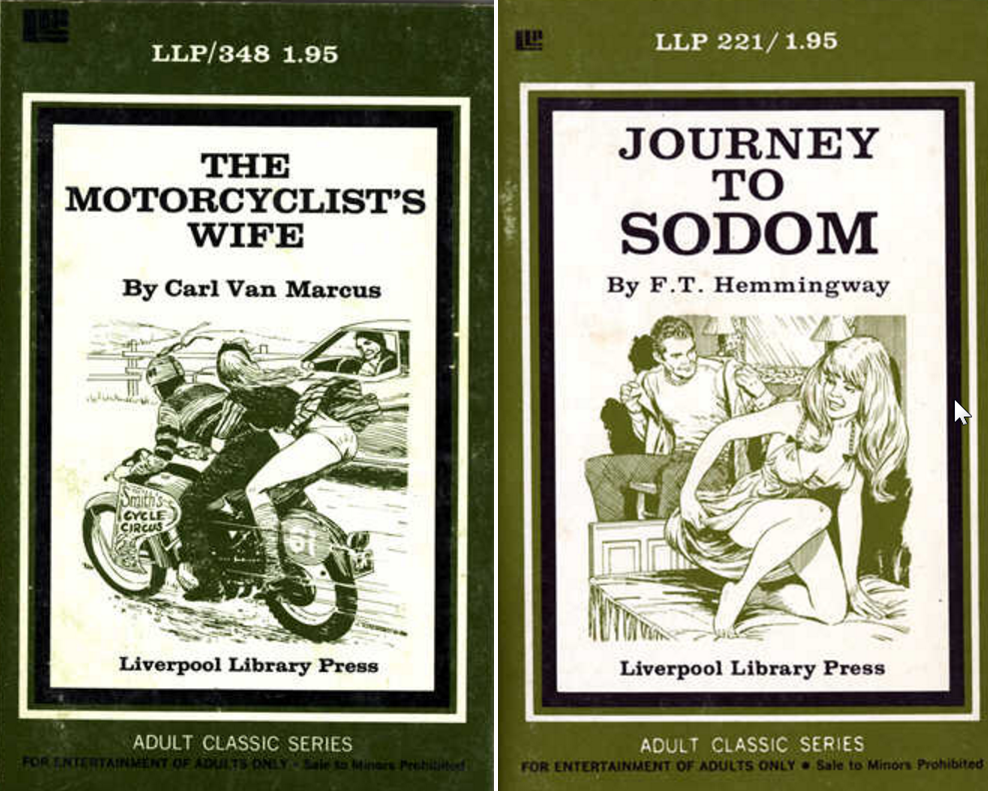 One of the reasons LLP’s writing was a cut-above other sleaze publications was because it payed a decent wage.  In 1969, the going rate was $1,200 per novel.  Not a bad rate considering (1) that equates to about $8,000 in today’s dollars and (2) an author could easily crank one of these books out every week. 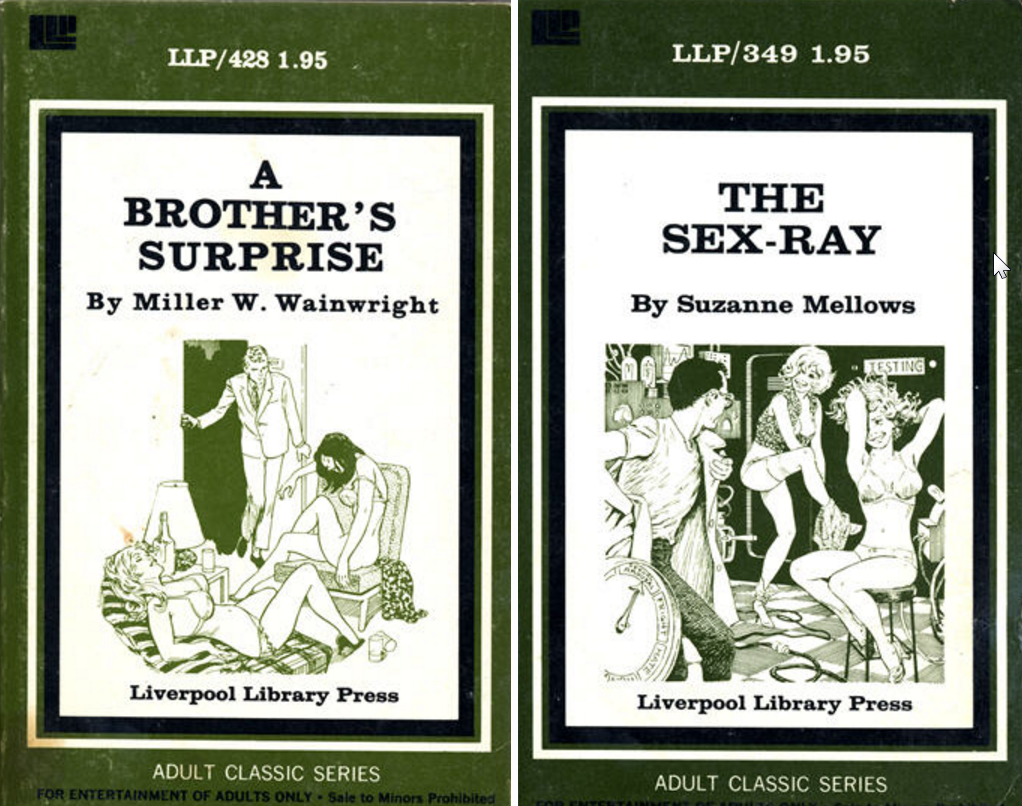 LLP books were even illustrated.  The combination of quality writing, ink artwork throughout, and great timing made LLP a mega-success.  Numerous LLP clones appeared on adult bookstore shelves, but LLP remained among the top-of-the-top for the duration of the Golden Age of Sleazy Reads (the 1960s-1970s).

Then, as we all know, the most cataclysmic event in the history of adult entertainment occurred: the arrival of the affordable video cassette recorder… 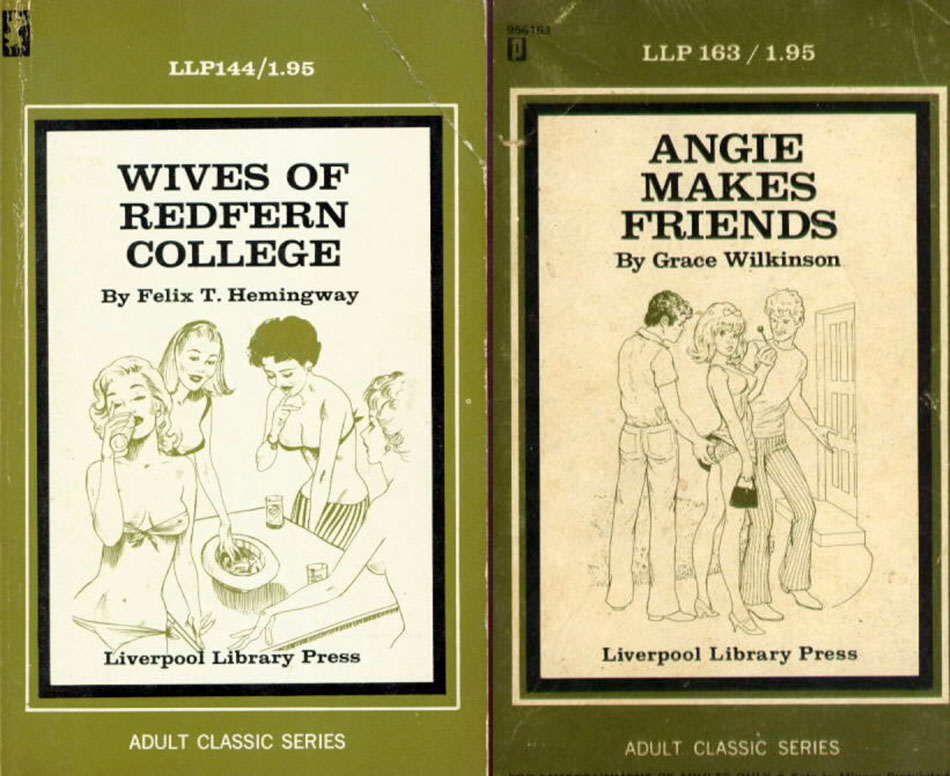 Naturally, LLP saw its sales nosedive – as did all other adult book publishers, and it went out of business before the 1990s arrived (which would have delivered another fatal blow via the Internet). 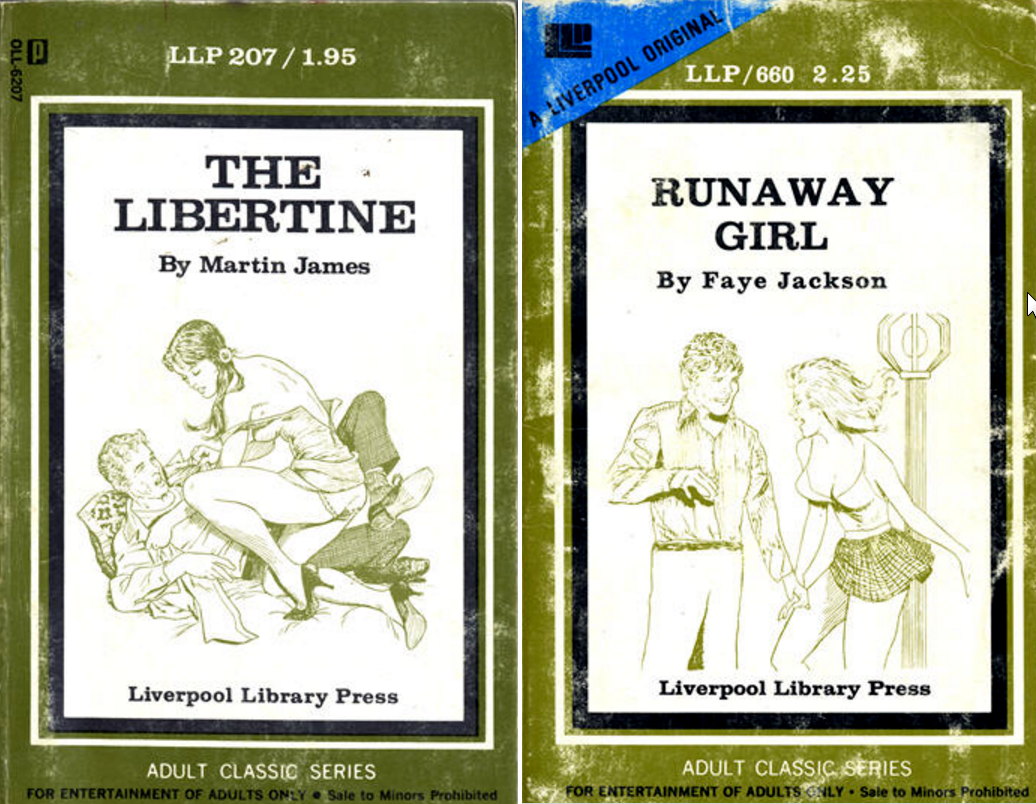 1980s LLP books just weren’t the same: the signature line-drawing cover art was gone, and much of the material was recycled from previous works.  Their glory days were confined to 1967 through the late seventies, where they offered the rare “gift” of quality writing for smutty material.

An example of a typical opening line from an LLP work:

“The tall, ravishing charmer with the radiant dark-eyes and bouffant coiffure of ebony tresses was well aware of the attractive young man’s eyes upon her, and had been since the moment she walked into the hotel lounge.” – The Pendulum Initiation (1970)

Hey it isn’t Shakespeare, but it beat other sleazy paperbacks by a wide margin – and for that, it deserves credit. 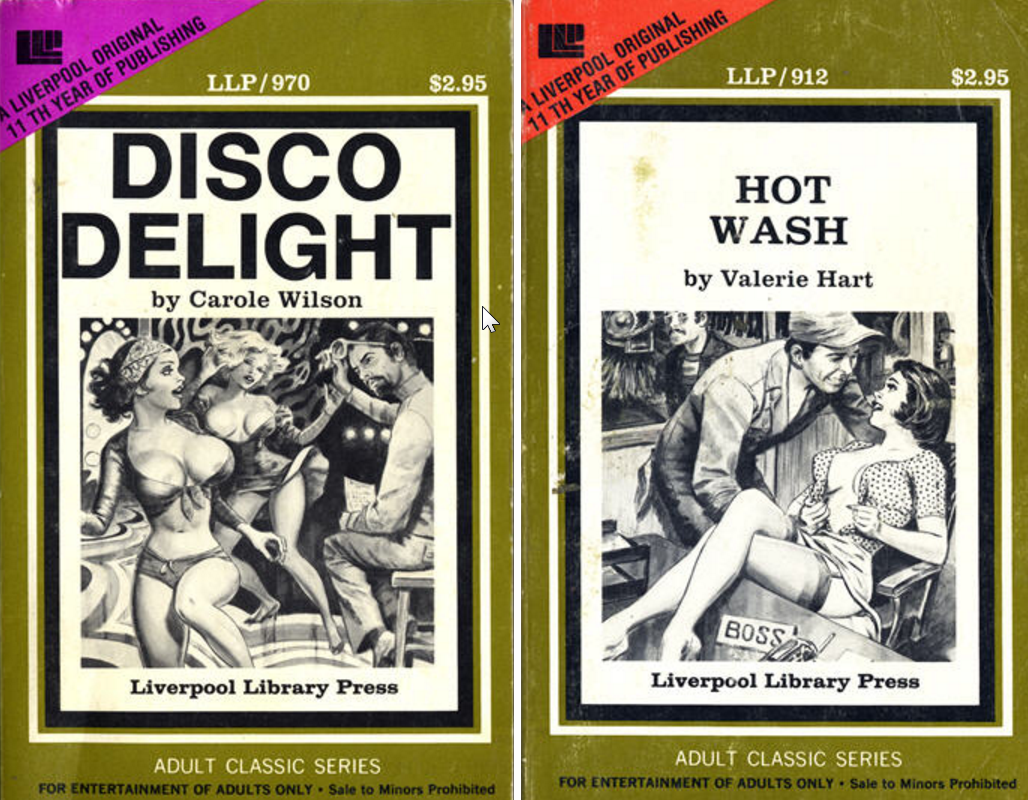 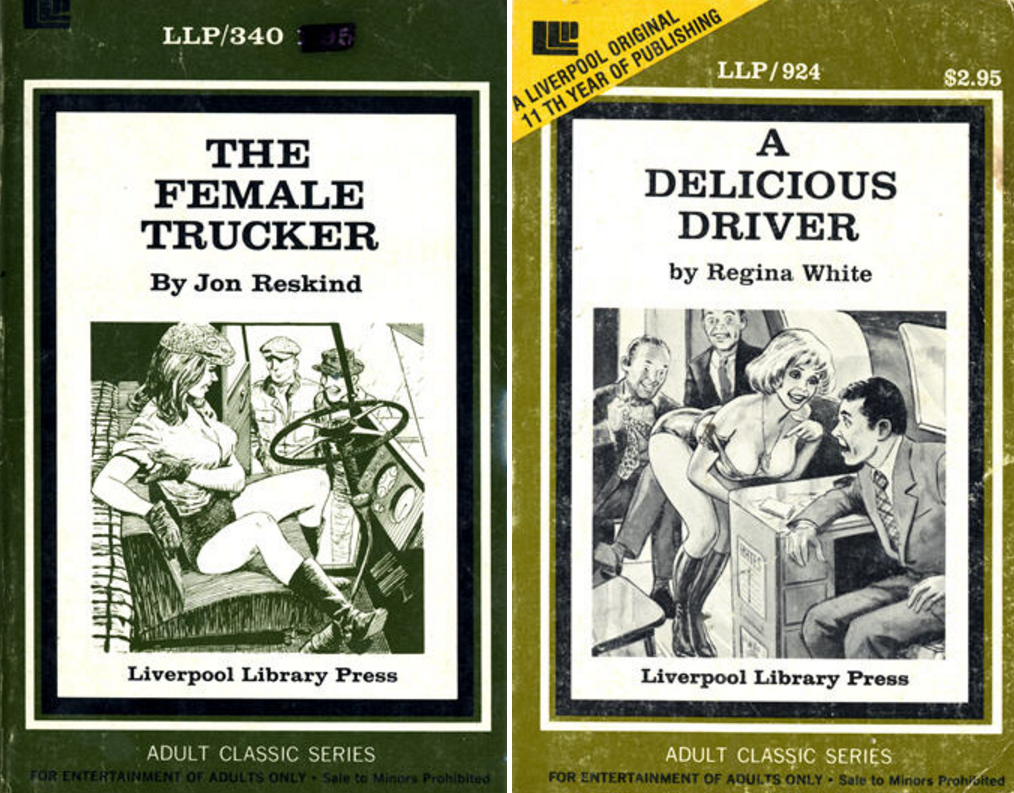