Working as an investigative photographer for the National Child Labor Committee (NCLC), Lewis Hine (1874-1940) documented working and living conditions of children in the United States between 1908 and 1924.

By 1910, an estimated 2 million children under the age of 15 were working industrial jobs. Conditions were often horrendous.

Founded in 1904, the National Child Labor Committee set out on a mission of “promoting the rights, awareness, dignity, well-being and education of children and youth as they relate to work and working.” Starting in 1908, the Committee hired Hine first on a temporary and then on a permanent basis, to carry out investigative and photographic work for the organization.

Hine called it “detective work.” He assumed a variety of personas – including Bible salesman, postcard salesman, and industrial photographer making a record of factory machinery – to gain entrance to the workplace. When unable to deflect his confrontations with management, he simply waited outside the canneries, mines, factories, farms, and sweatshops with his fifty pounds of photographic equipment and photographed children as they entered and exited the workplace.

Hine’s photos and the work of the NCLC led to change. The Keatings-Owen Child Labor Act in 1916 established minimum ages and maximum shift lengths for young workers. The Act was later decreed unconstitutional, but it laid the foundation for other child labor laws to be passed during the New Deal. 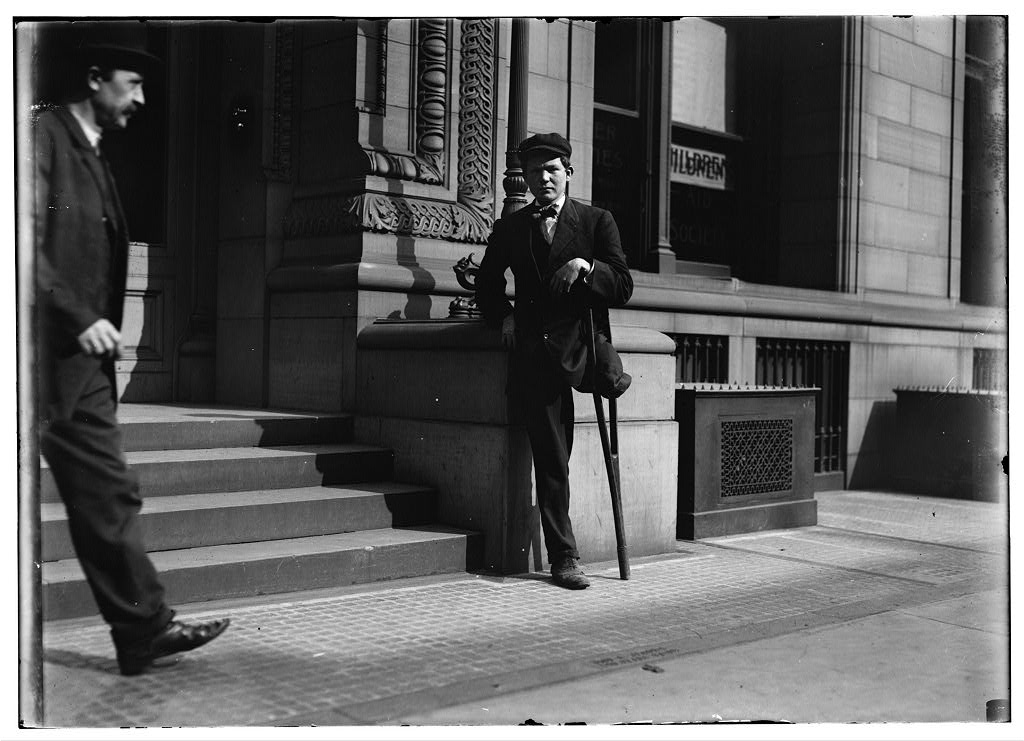 National Child Labor Committee No. 954. 1-legged boy. Neil Gallagher, Wilkes Barre, Pa. Born January 14, 1891. Went to work at about 9 years. Worked about two years in breaker. Went inside at about 11 years. “Tripper,” tending door. 83 cents [a] day. Injured May 2, 1904. Leg crushed between cars. Amputated at Mercy Hospital, Wilkes Barre. In Hospital 9 weeks. Amputated twice. No charge. Received nothing from company. “Was riding between cars and we aren’t supposed to ride between them.” No written rules, but they tell you not to. Mule driver (who was on for first day) had taken his lamp and he tried to reach across car to get it. Slipped between bumpers. Been working in breakers since. Same place $1.10 a day. Work only about 1/2 time. Work about 6 hour day. Left 3 months ago. Been in N.Y. – no work. Trying to get work in Poolroom. Applicant at Bureau for Handicapped, 105 E. 22nd Street, N.Y. Nov. 1, 1909. Father living, (Mother dead.) Miner same place. Hurt month ago Rock fall. 2 brothers 25, 27. Home 15 Pennsylvania St. Location: Wilkes Barre, Pennsylvania. November 1909 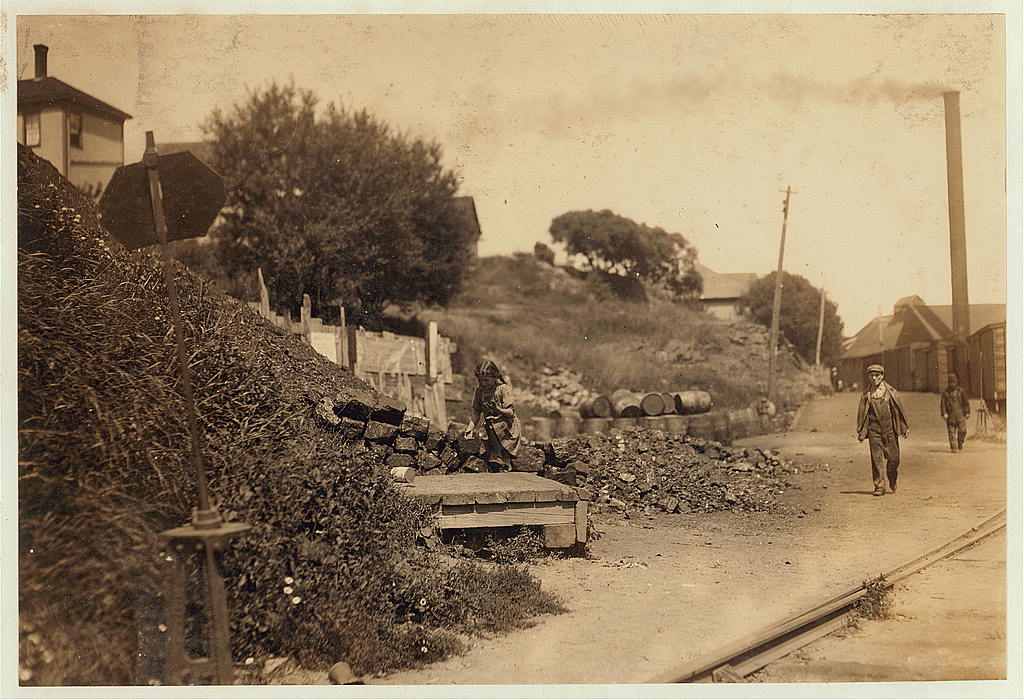 In center of the picture is Phoebe Thomas, 8 year old Syrian girl, running home from the factory all alone, her hand and arm bathed with blood, crying at the top of her voice. She had cut the end of her thumb nearly off, cutting sardines in the factory, and was sent home alone, her mother being busy. The loss of blood was considerable, and might have been serious. (See succeeding photo) Location: Eastport, Maine. 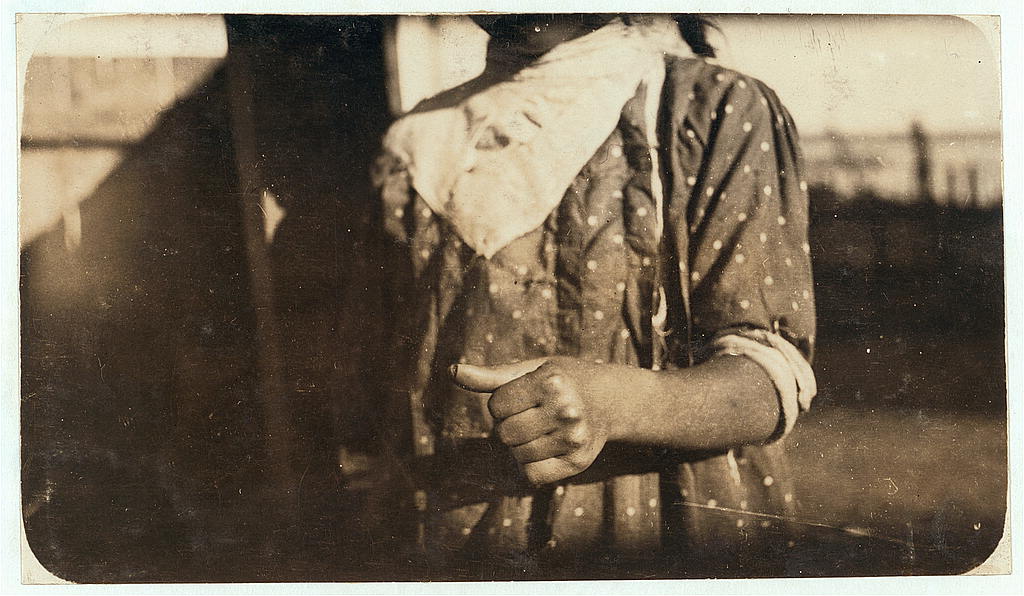 Phoebe’s thumb [Phoebe Thomas], a week after the accident. She was back at the factory that day, using the same big knife. Location: Eastport, Maine. 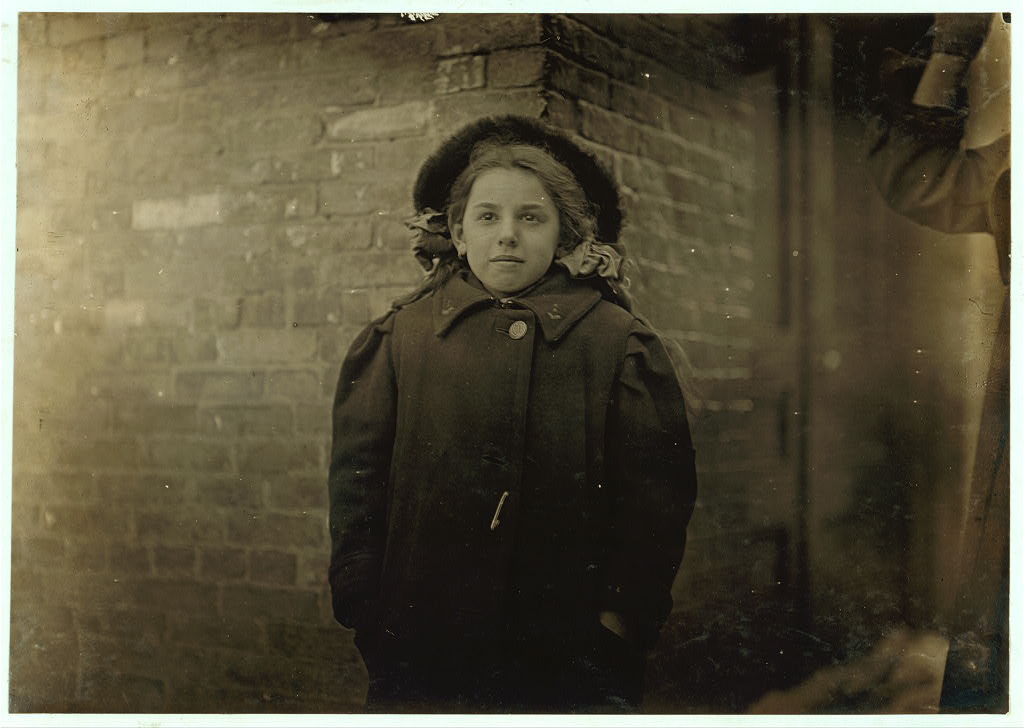 Mery Horn, a hunchback. The doctor told her it was a severe case and was being aggravated by the heavy load of papers she carried and so she must stop. She replied “But I need the spending money. I have to go to shows.” Location: Hartford, Connecticut. 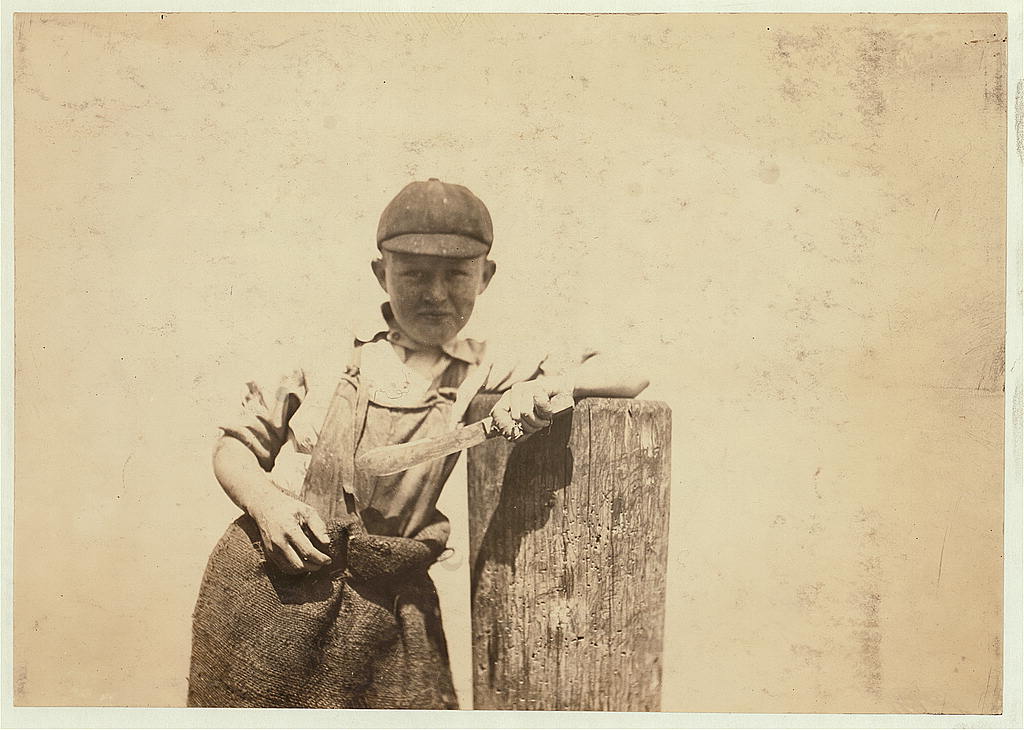 Butcher knife used by Ralph, a young cutter in a canning company and a badly cut finger. Several children working with him had cut fingers, and even the adults said they could not help cutting themselves. Location: Eastport, Maine. August 1911 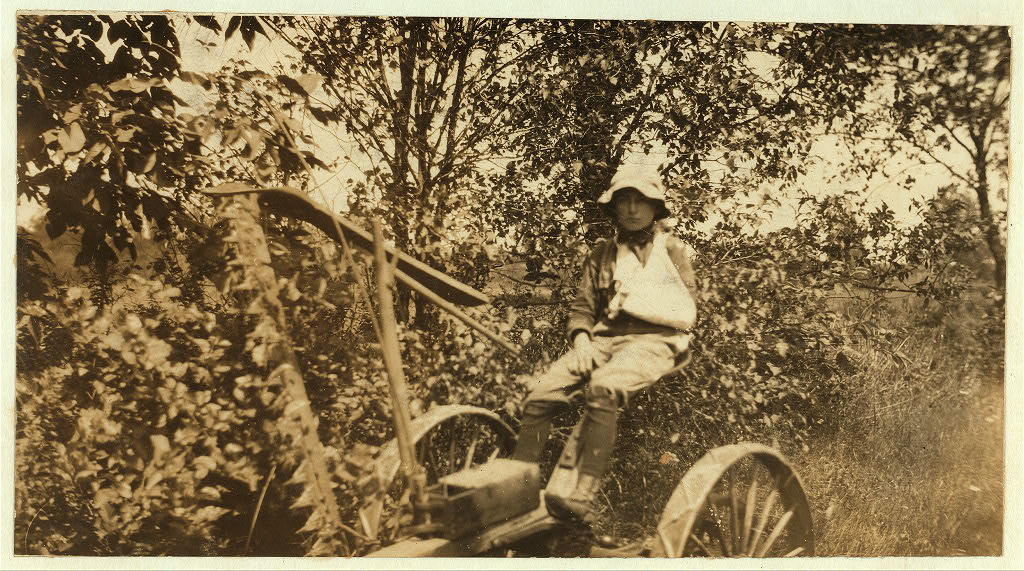 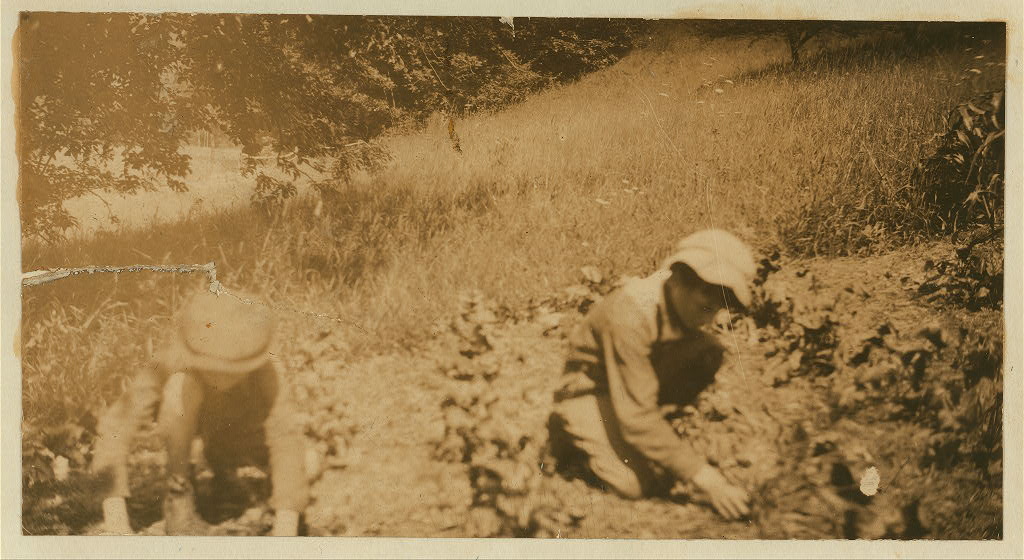 Rural Accident. Four weeks after the accident Clinton was using his remaining hand to help in the farm work as best he could. His mother said: “Now we will have to educate him.” See Hine Report, August 1915. 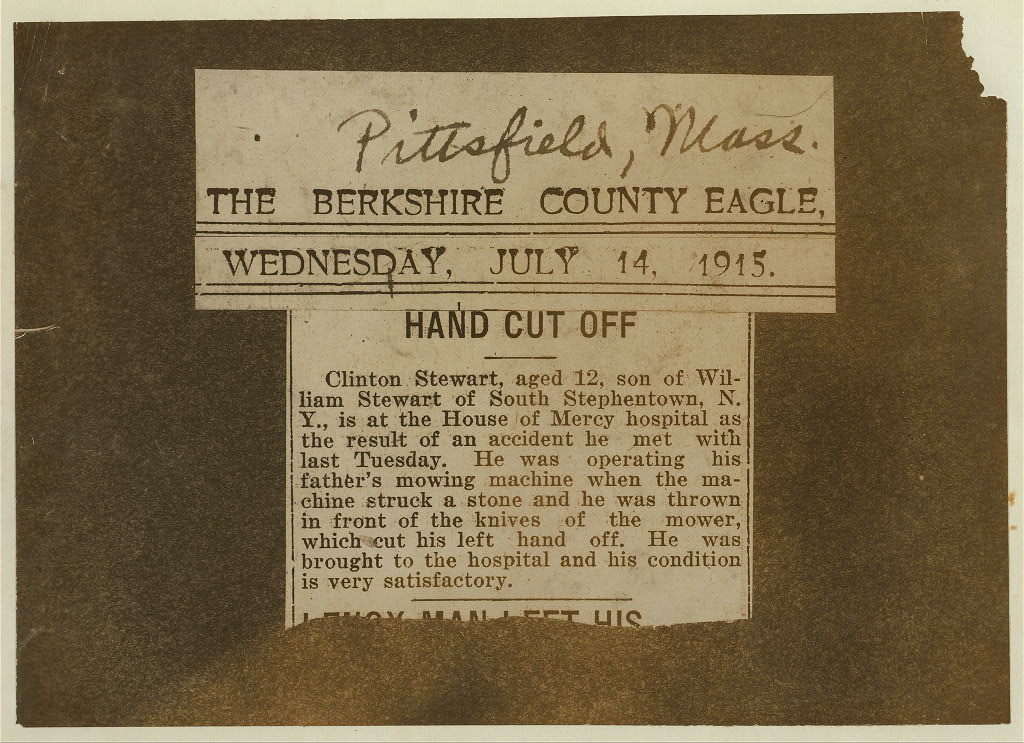 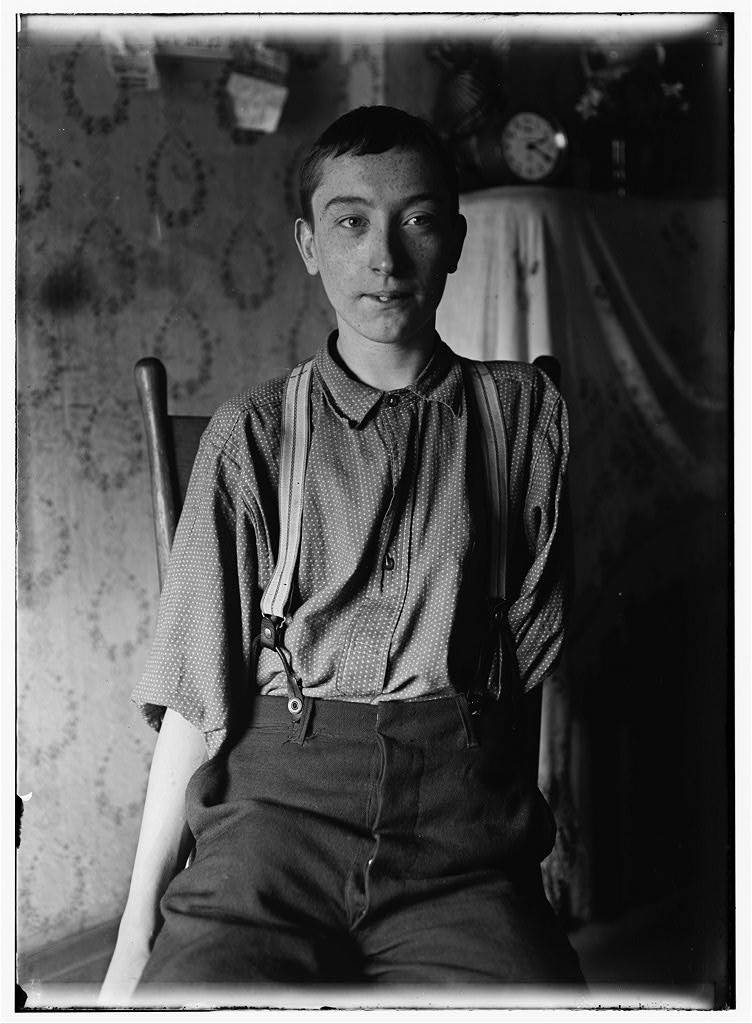 Harry McShane – 134 B’way [I,e, Broadway] -Cin. O. – 16 yrs. of age on June 29, 1908. Had his left arm pulled off near shoulder, and right leg broken through kneecap, by being caught on belt of a machine in Spring factory in May 1908. Had been working in factory more than 2 yrs. Was on his feet for first time after the accident, the day this photo was taken. No attention was paid by employers to the boy either at hospital or home according to statement of boy’s father. No com- pensation. Location: Cincinnati, Ohio. August 1908 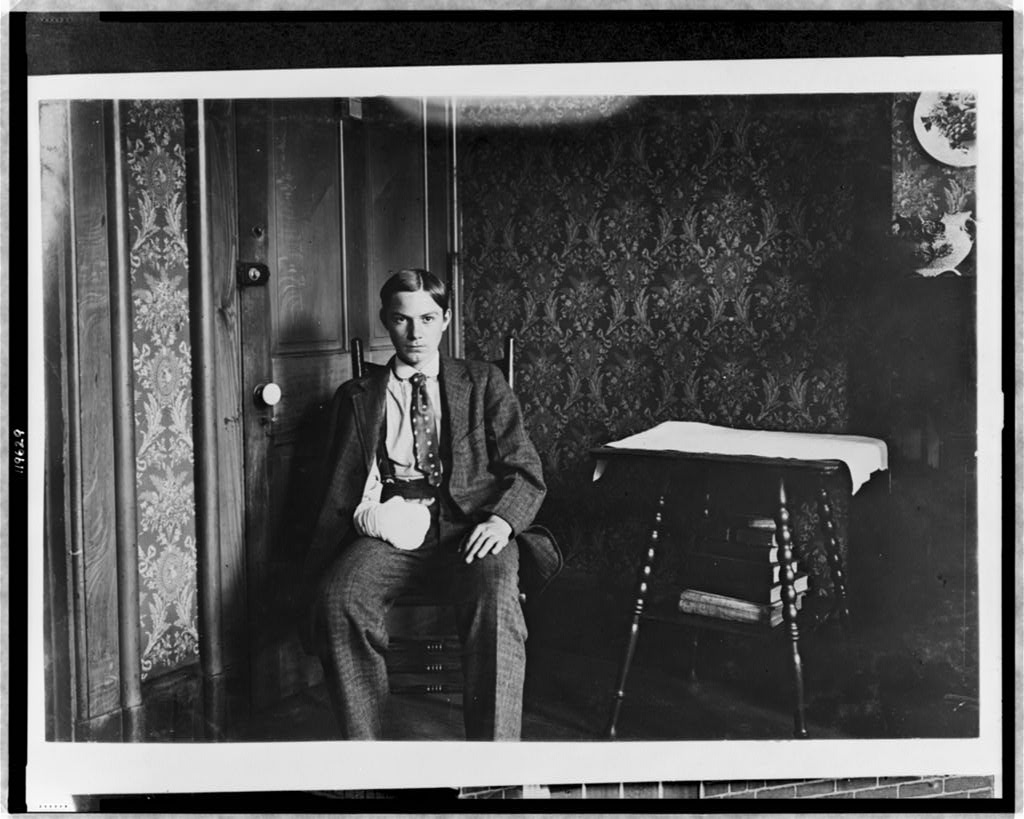 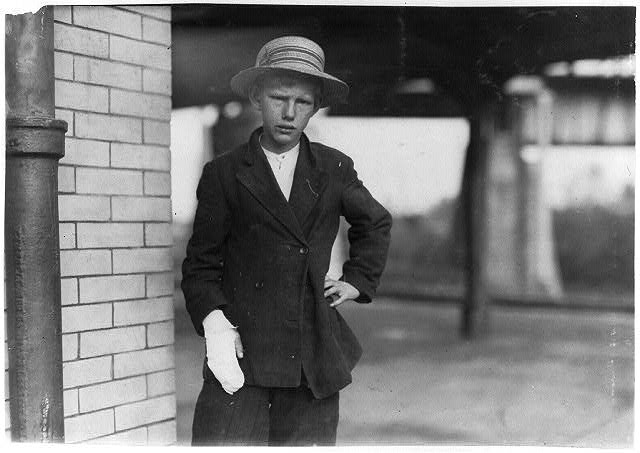 An accident case of a 13-year-old doffer. Had been working since he was nine. “I got my hand caught in the cogs of the spinning machine, and lost part of my finger. It stopped the machine and I tell you it hurt. It pains me a lot now. Don’t you think they orter pay me wages while I’m out with this bad hand? No, I can’t read or write, but I think my mammy knows how to spell my name.” Location: Weldon, North Carolina. November 1914 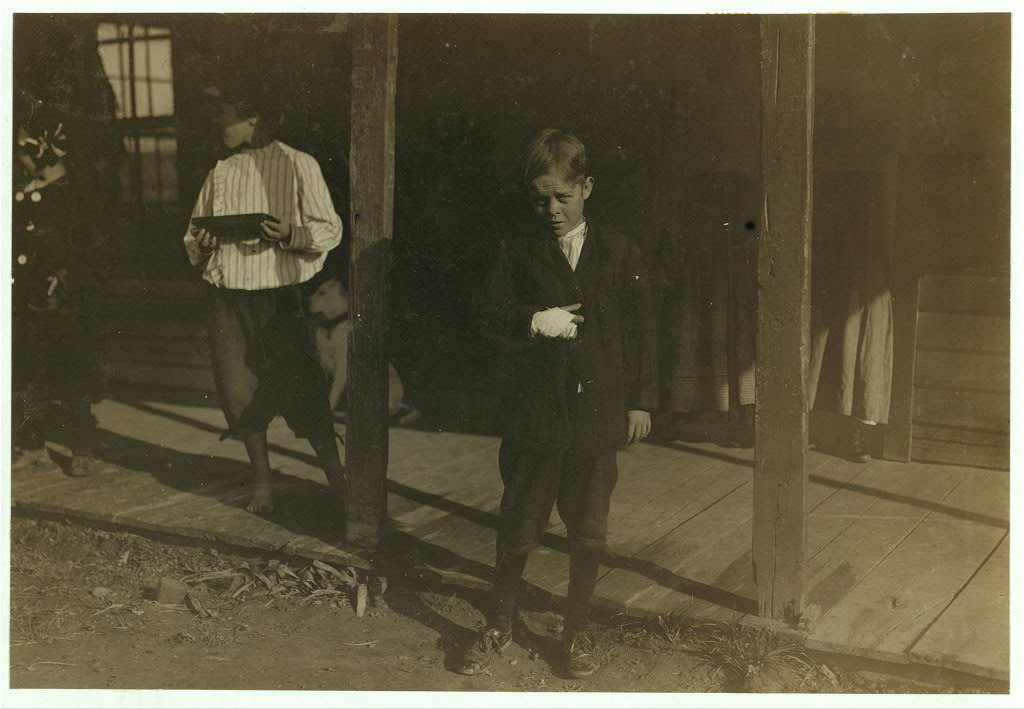 Accident to young cotton mill worker. Giles Edmund Newsom (Photo October 23rd, 1912), while working in Sanders Spinning Mill, Bessemer City, N.C., August 21st, 1912, a piece of the machine fell on to his foot mashing his toe. This caused him to fall on to a spinning machine and his hand went into unprotected gearing, crushing and tearing out two fingers. He told the Attorney he was 11 years old when it happened. His parents are now trying to make him 13 years old. The school census taken at the time of the accident makes him12 years (parents’ statement) and school records say the same. His school teacher thinks that he is 12. His brother (photo 3071) is not yet 11 years old. Both of the boys worked in the mill several months before the accident. His father, (R.L. Newsom) tried to compromise with the Company when he found the boy would receive money and not the parents. The mother tried to blame the boys for getting jobs on their own hook, but she let them work several months. The aunt said “Now he’s jes got to where he could be of some help to his ma an’ then this happens and he can’t never work no more like he oughter.”]. Location: [Bessemer, North Carolina]. October 23, 1912 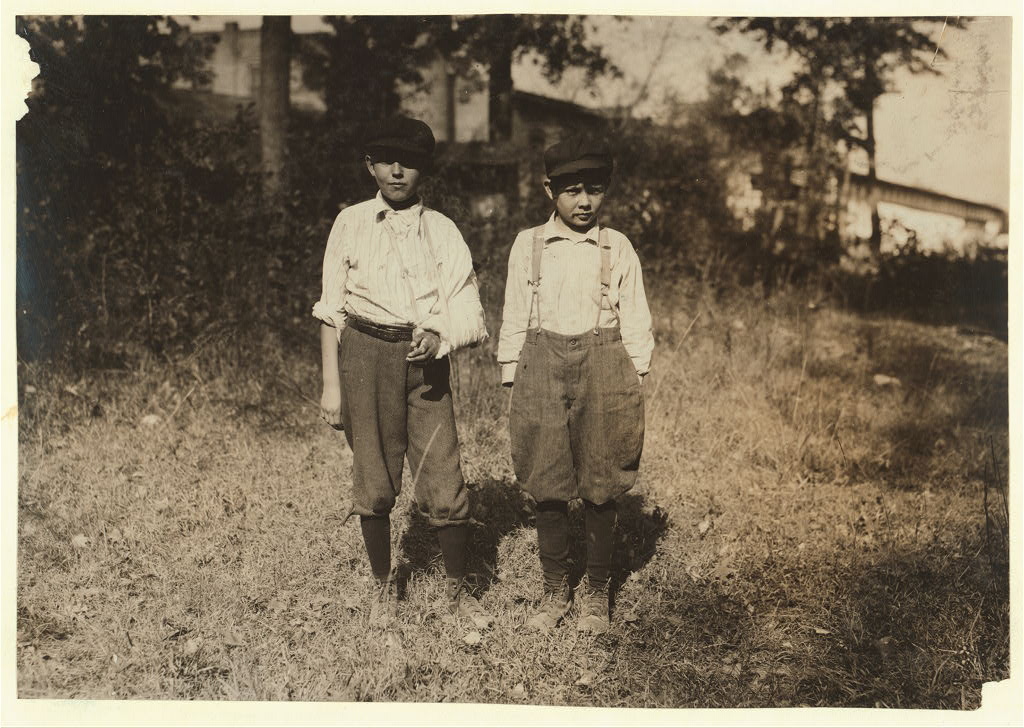 Sanford Cotton Mill. Accident case. Carl Thornburg a 12 year old boy who went to work at 11. A few weeks ago he caught his arm in the “lapper” machine, and broke it in 2 places. He said: “I sure didn’t mean to. Was jus goin through the lapper room an fust thing I knew everything went black.” The family is hard-up. Father is a paralytic. Here is a real chance for a mill to do a benevolent deed by making some recompense to this crippled boy and his paralytic father. They think it’s charity to give a boy work under legal age, but when he is injured they forget that side of it. No suggestion of any kind of recompense has been heard. Jim Browning said he was 12 years old, but that is doubtful. Has worked 6 months here; gets 50 cents a day. Is in the 2nd grade at school. Location: Sanford, North Carolina. November 1914 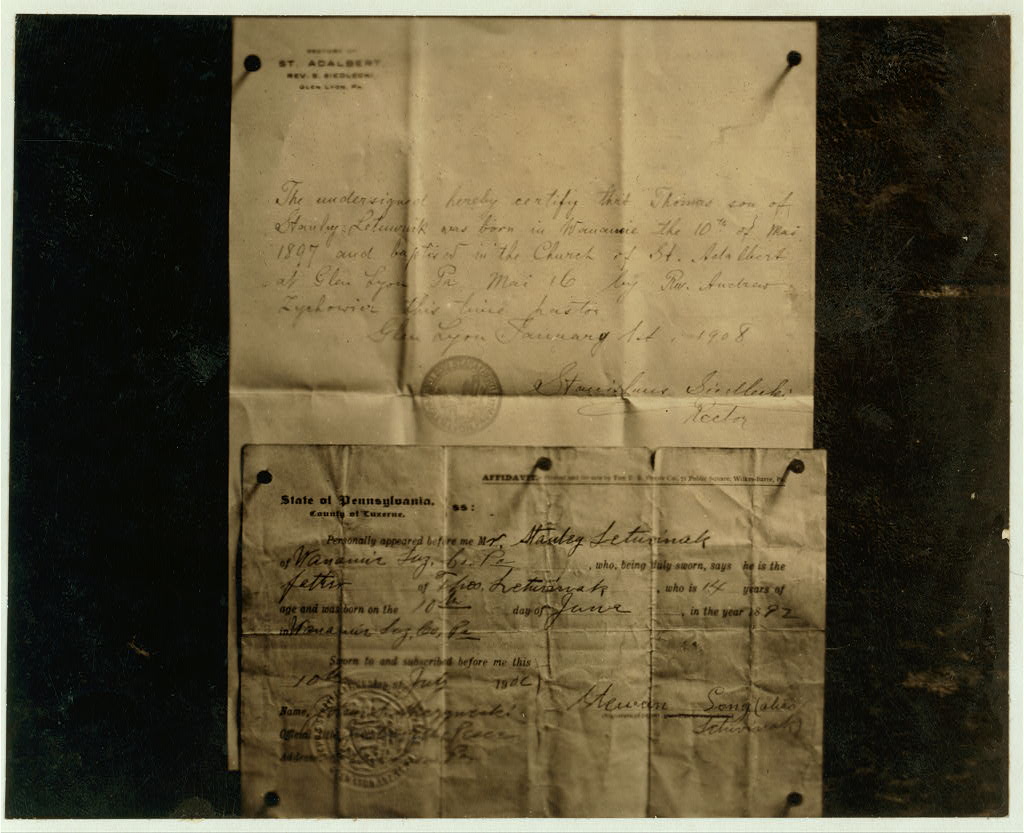 Comparison of Baptisimal Record and Age Certificate of Stanley Letuvinak (American name, Thomas Long). Born according to baptismal record May 10, 1897; date of birth given in age certificate was June 10, 1893, in order to make him 14 years of age. He was killed by falling from a breaker at Wanamie, Pa., when only 10 years of age. The Coroner’s Jury, said in its report, “We find said company not responsible for the accident as they held affidavit from his father that he was 14 and the boy was away from his work when the accident occurred.” 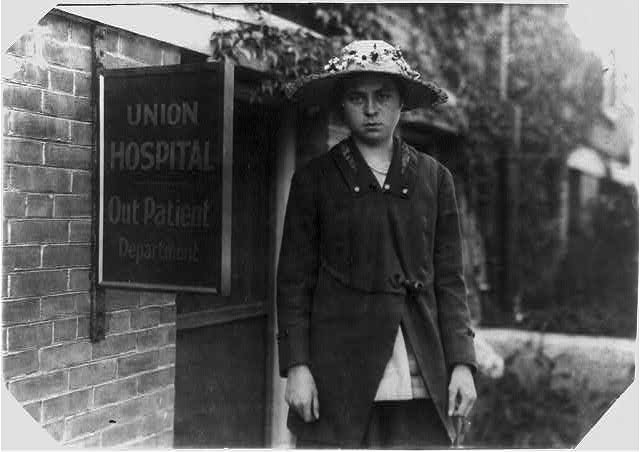 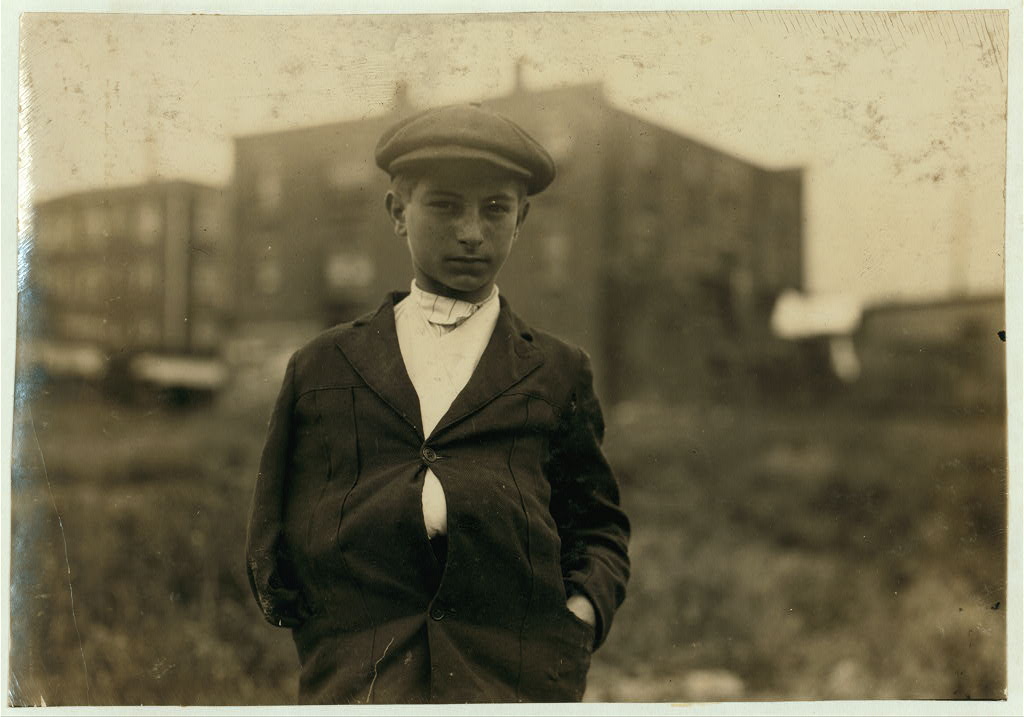 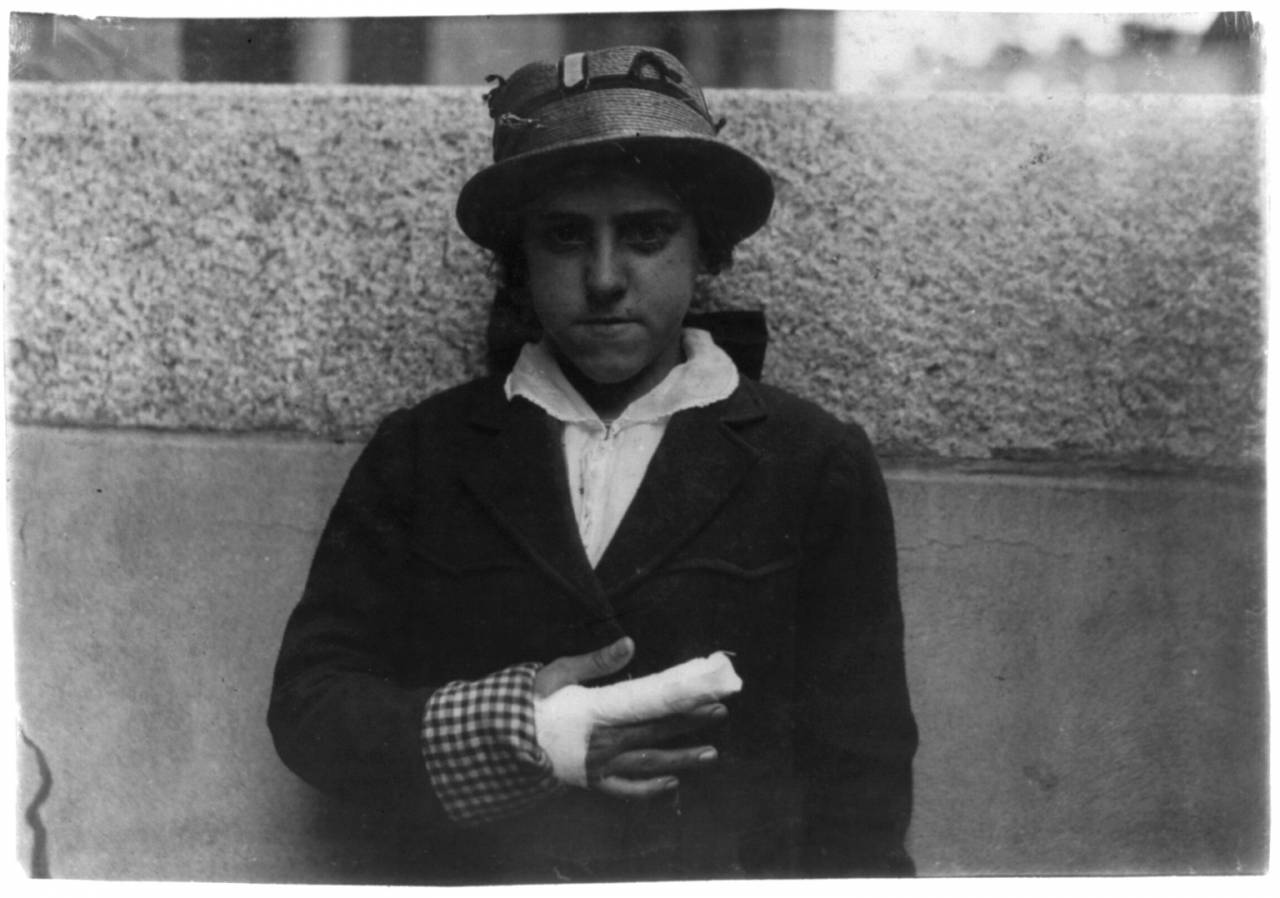 Union Hospital case – Estelle Poiriere, 137 Robeson St., 15 years old. Doffer at Granite No. 1 mill. Laceration of index and middle finger of right hand. Caught in card machine. Injured Dec. 21, 1915 and finger grew stiff and had to have cord cut. Still an outpatient in June and not working yet. Location: Fall River, Massachusetts. June 19, 1916 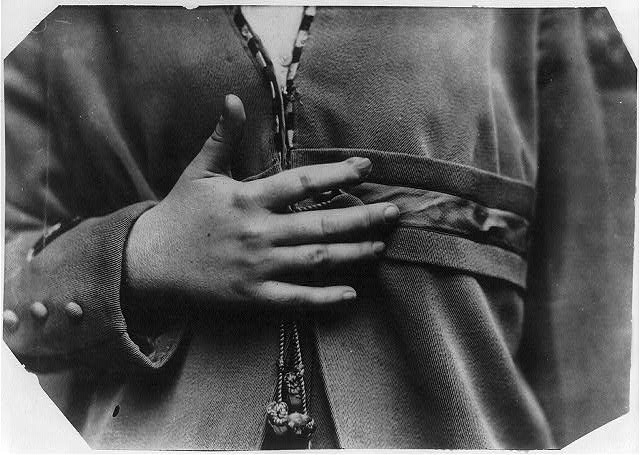 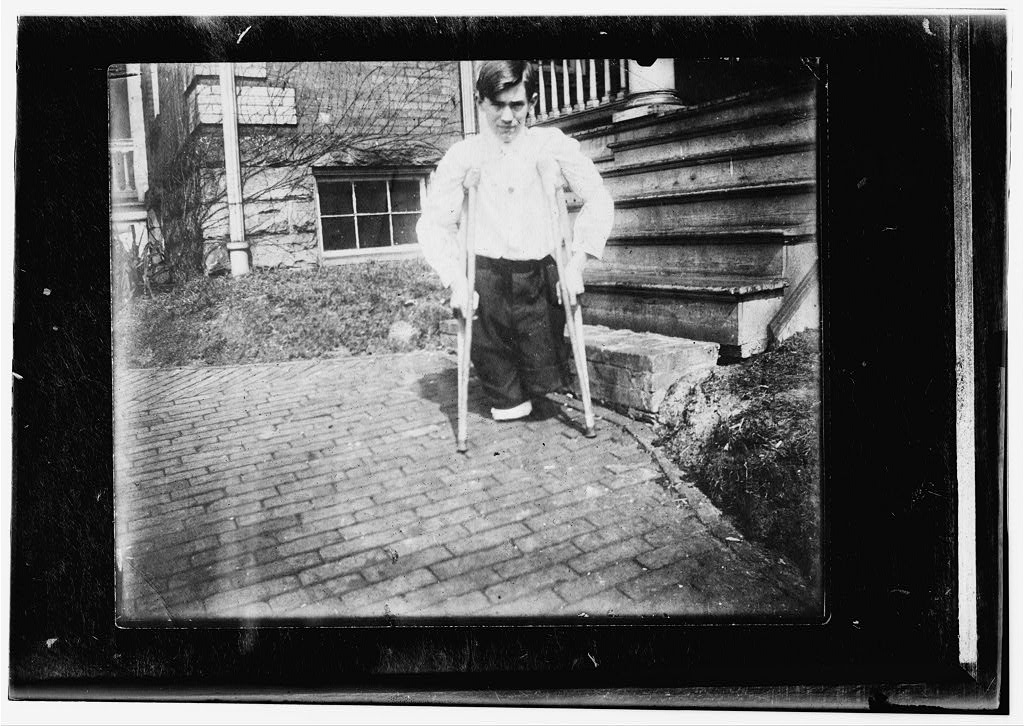 Monongah, W. Va. Nola McKinney, Secretary, 1910, West Virginia Child Labor Committee. Frank P……., whose legs were cut off by a motor car in a coal mine in West Virginia when he was 14 years 10 months of age. Location: Monongah, West Virginia. March 1910

Shows the way they cut the fish in sardine canneries. Large, sharp knives are used, with a cutting and sometimes a chopping motion. The slippery floors and benches, and careless bumping into each other increase the liability to accident. “The salt gits in the cuts an’ they ache.” Location: Eastport, Maine. August 1911 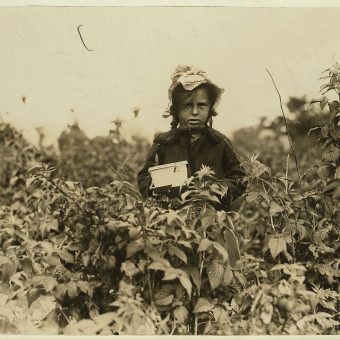 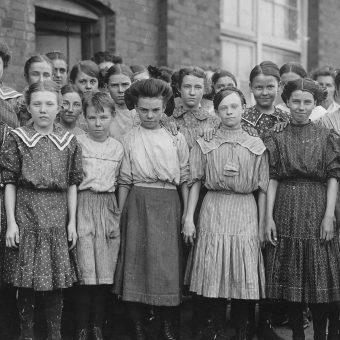 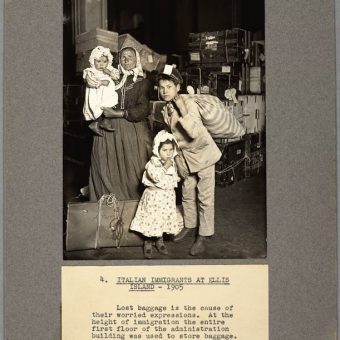