Years after concerns were raised about the authenticity of around half of the punk fashion pieces in the Metropolitan Museum Of Art Costume Institute collection, cleaning house has finally begun at the New York institution with the expulsion of two bondage suits purporting to have been original 70s designs by Malcolm McLaren and Vivienne Westwood. 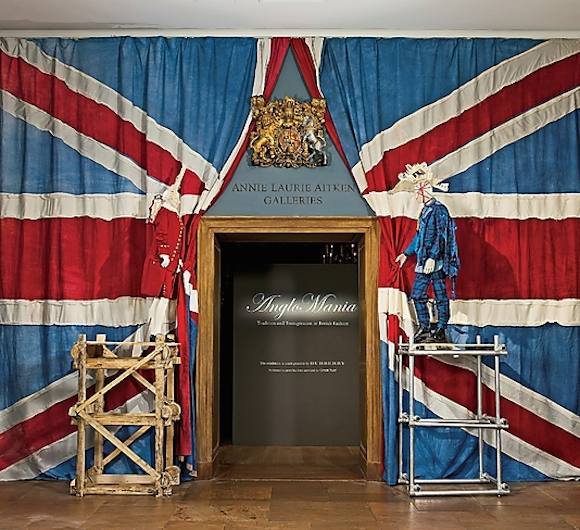 One of the two bondage suits which have been removed from the Met collection. They were previously granted prominence in the museum’s 2006 exhibition Anglomania. This image is from the frontispiece of the show’s lavish catalogue 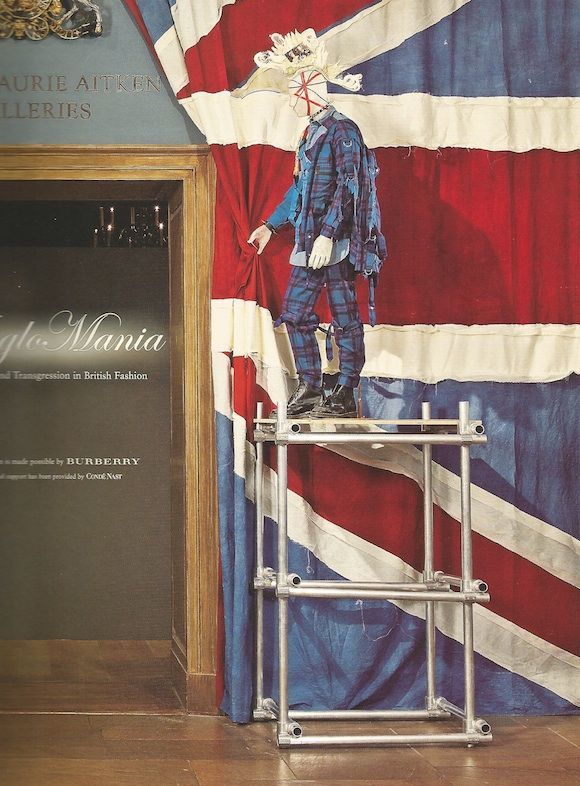 A museum spokesperson has confirmed that the suits have been “formally de-accessioned”. A relatively rare process in international-standard curatorial circles, de-accessioning occurs when information undermining the provenance and authenticity of a museum object comes to light. 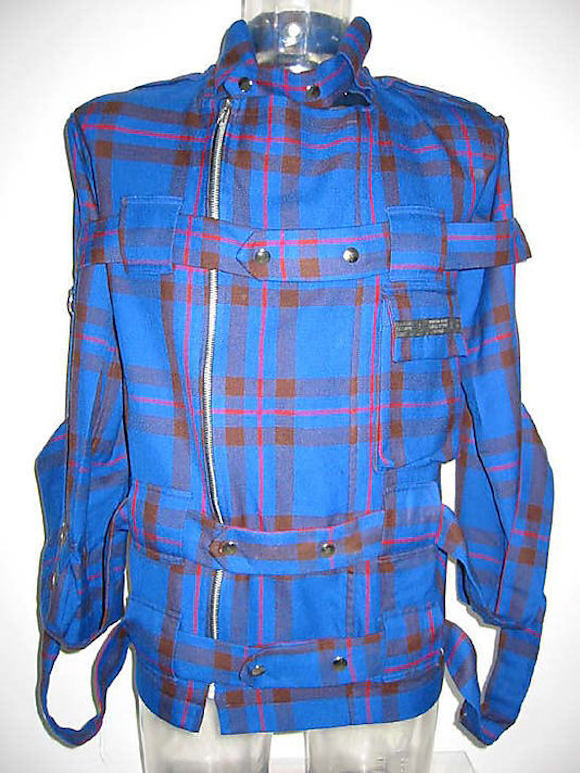 De-accessioned: Jacket from blue tartan bondage suit which has been permanently deleted from the Met’s collection 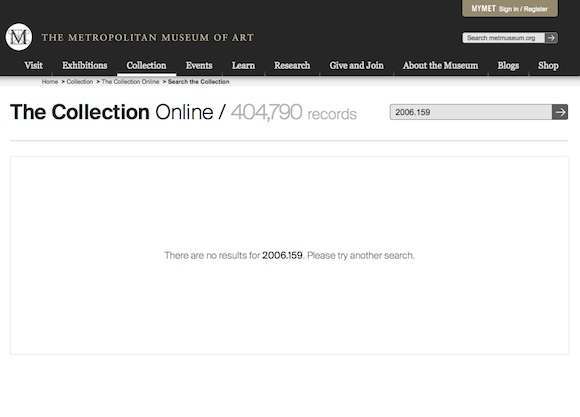 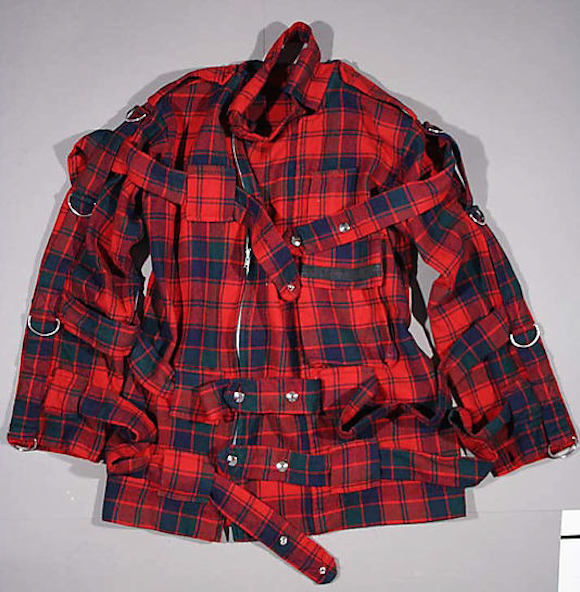 De-accessioned: Jacket from red tartan bondage suit which has been permanently deleted from the Met’s collection

The Met’s policy is to retain de-accessioned works for study purposes though in some cases they may be destroyed. The fate of the two suits is not known; neither is it established whether the vendor was contractually bound to return the fee paid for the clothes should they turn out to be rogue.

Embarrassingly for the museum these elaborate designs – in blue and red tartan complete with straps and buckles – were featured prominently in its ballyhoo-ed 2006 exhibition Anglomania: Tradition & Transgression In British Fashion. 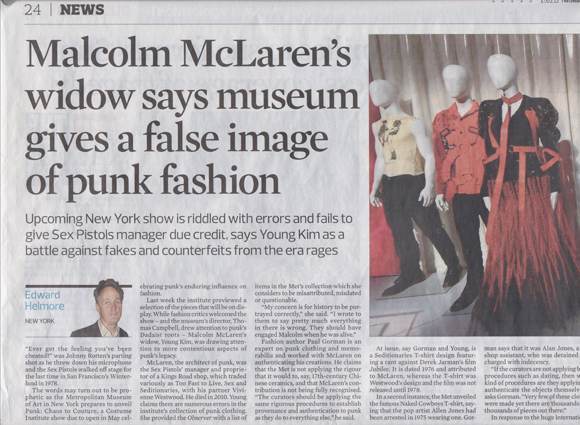 Following challenges over due diligence failures, serial misattribution, misdating and lack of provenance in the Met’s punk collection, inspections in 2013 by a number of collectors and experts, including myself, revealed at least 30 garments – including these suits – to be inauthentic or at the very least seriously questionable.

The two bondage suits were in the style sold at McLaren and Westwood’s store Seditionaries in the late 70s, worn by the Sex Pistols and others and reproduced in quantity by rival King’s Road outlet Boy in the 80s. 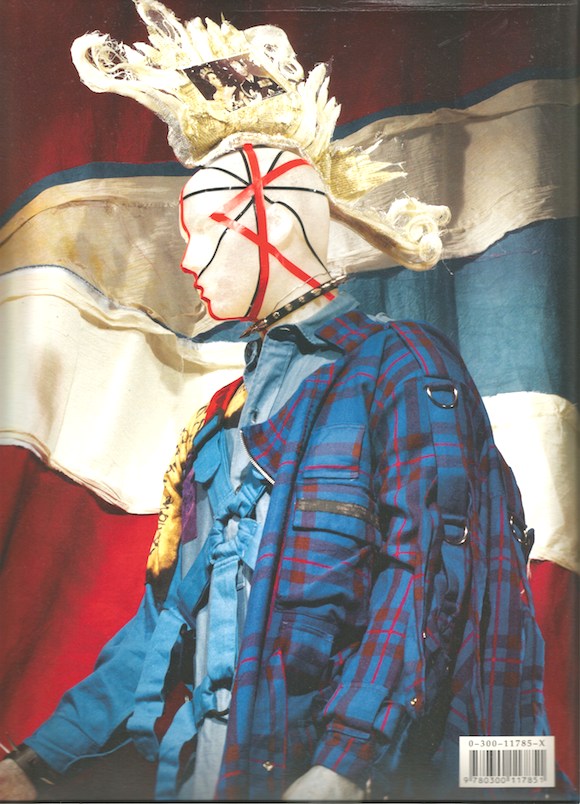 De-accessioned jacket featured in the photograph which adorned the back of the Anglomania catalogue in 2006. 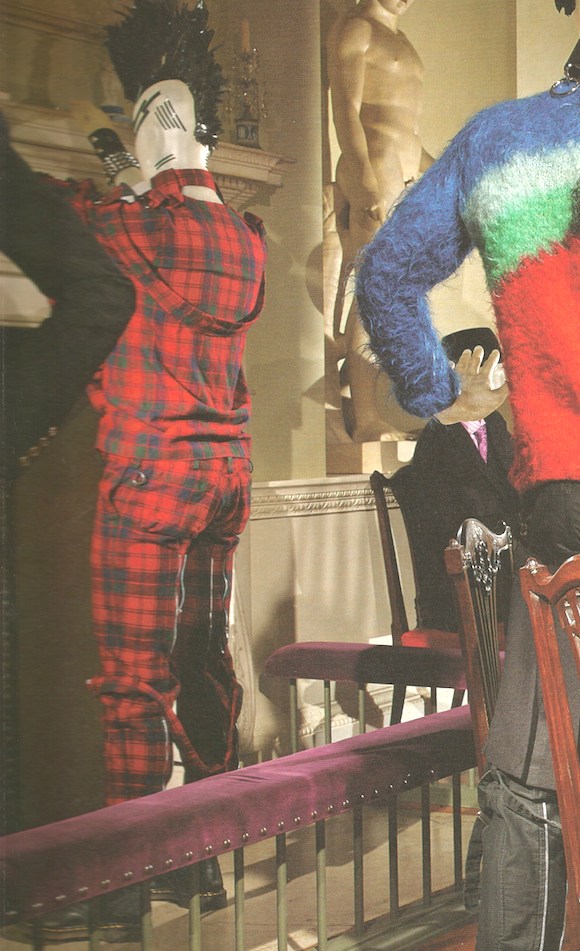 My opinion, confirmed by some of the world’s leading authorities, was that the suits were fabricated not from the fine woolen tartans of the originals but from merely serviceable material. In addition to other design inconsistencies, the garments were neither cut nor sewn with the finesse of the Seditionaries suits, so were likely to have been well-preserved 80s reproductions from Boy or based on a similar pattern.

This became evident when comparisons were made with the tartan bondage trousers which have been in the Met collection since the mid-80s. Donated by expat New York-based British fashionista Simon Doonan, these are indisputably authentic and contain aspects of the original design not present in the de-accessioned suits. 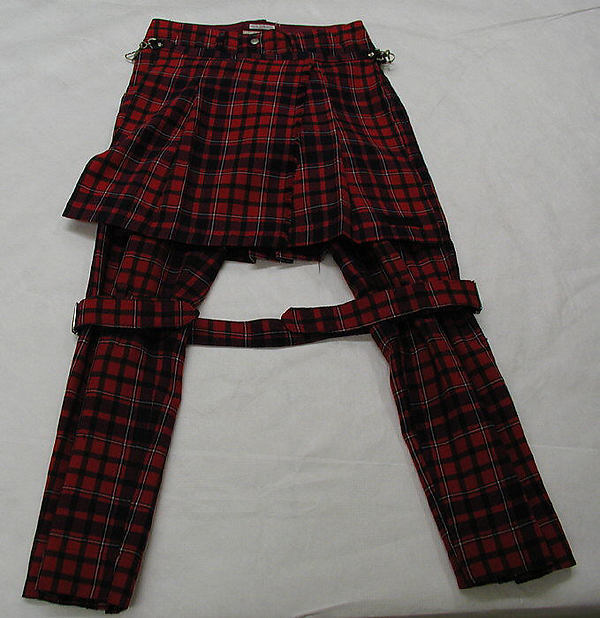 Authentic: The tartan bondage trousers and kilting attachments donated to the Met in 1986

The exclusion of the two suits does not mean that the Met is out of the woods. The punk clothing collection remains riddled with levels of inaccuracy, inconsistency and misattribution far below the standards required of arguably the greatest clothing collection in the world. Here are just a few examples: 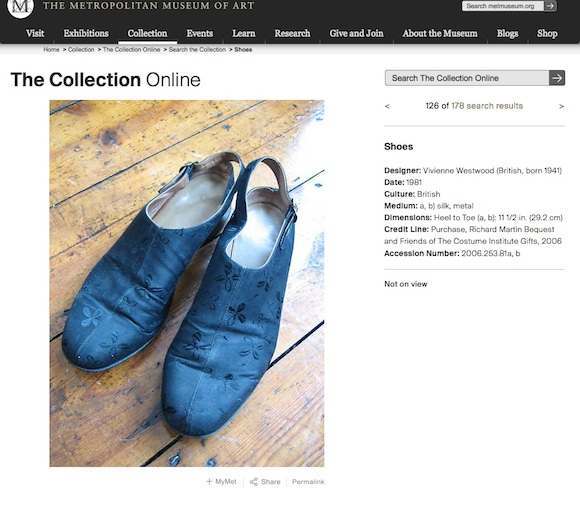 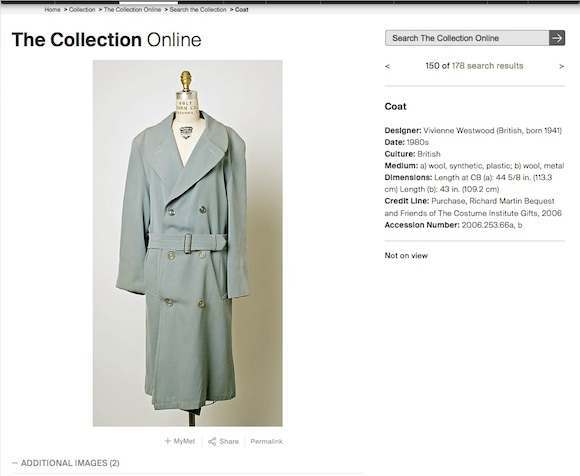 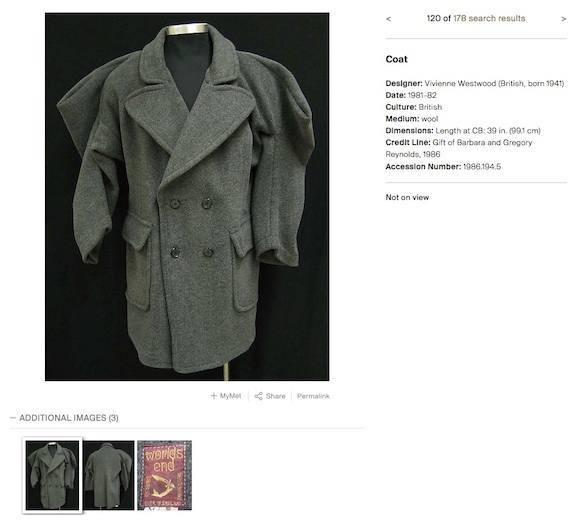 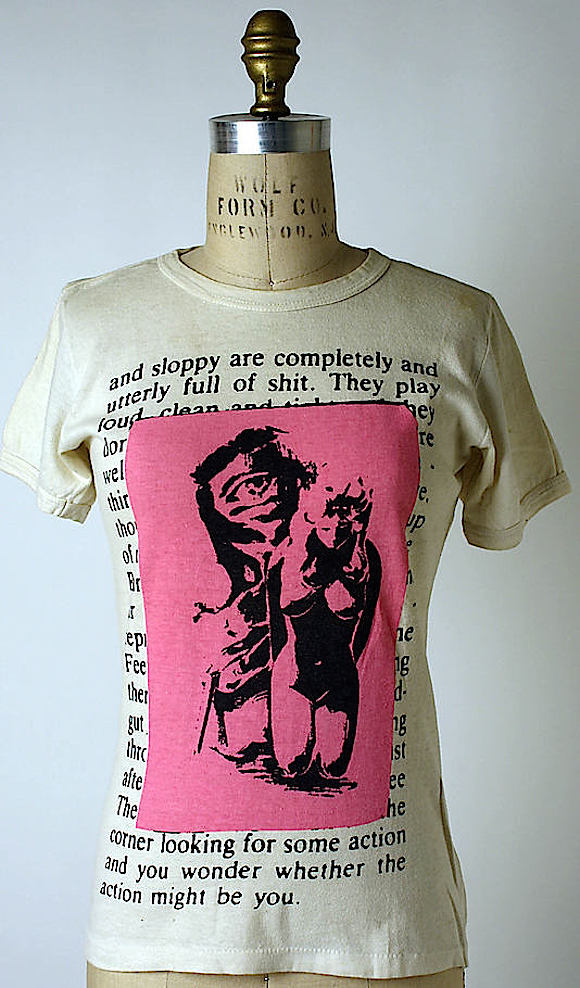 Inauthentic. Photo removed from the Met’s website but this dodgy T-shirt – like dozens more questionable garments – remains listed in the Costume Institute collection. The listing has been changed to “Attributed to” McLaren & Westwood; previously it was described as an authentic and original example of one of their designs

Meantime, the Met’s credibility has been further eroded by the decision to withdraw guarantees of absolute confidence in 30 or so designs – around half the punk collection – by reclassifying them as“Attributed to” McLaren & Westwood.

Six more garments sourced from the vendor who sold the museum the de-accessioned suits have been listed in this way, along with two dozen from other sources. 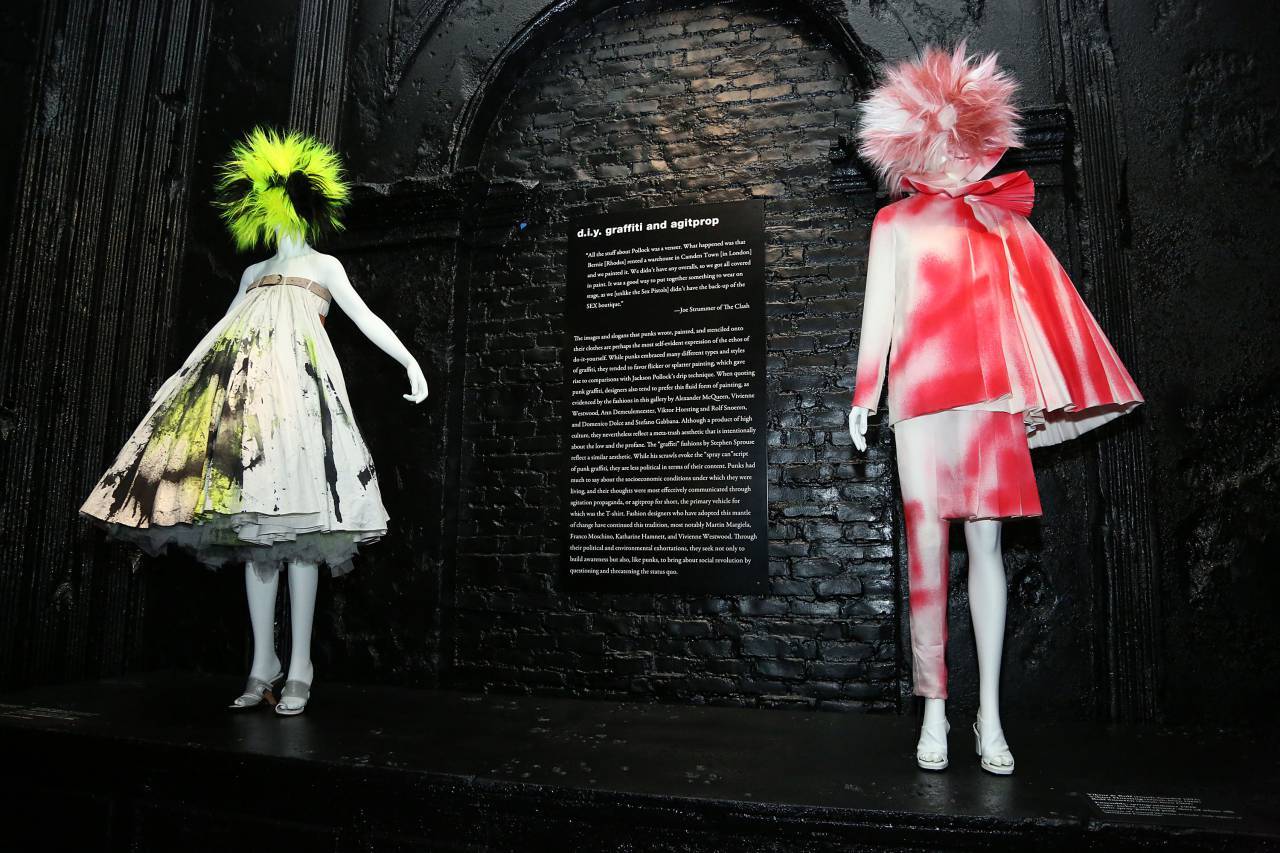 NEW YORK, NY – MAY 06: “PUNK: Chaos to Couture” Costume Institute Exhibition Press Preview at the Metropolitan Museum of Art on May 6, 2013 in New York City. (Photo by Rob Kim/Getty Images)

On the Met website, photography has been removed of all such items, resulting in teems of near-empty listings containing the unsatisfactory attribution fudge.

An “Attributed to…” classification is appropriate to, say, unsigned and difficult-to-date artworks; for example the Met’s Renaissance painting Portrait of A Woman is attributed to Giovanni di Franco – see here.

But it is fraught when applied to fashion designs purported to have been produced relatively recently, particularly pieces which are clearly labelled (as are the majority of these items). Certainly I can find no“Attributed to…” classification applied to any of the thousands of other garments in the Met/CI collection and have received no response to my request for other examples. 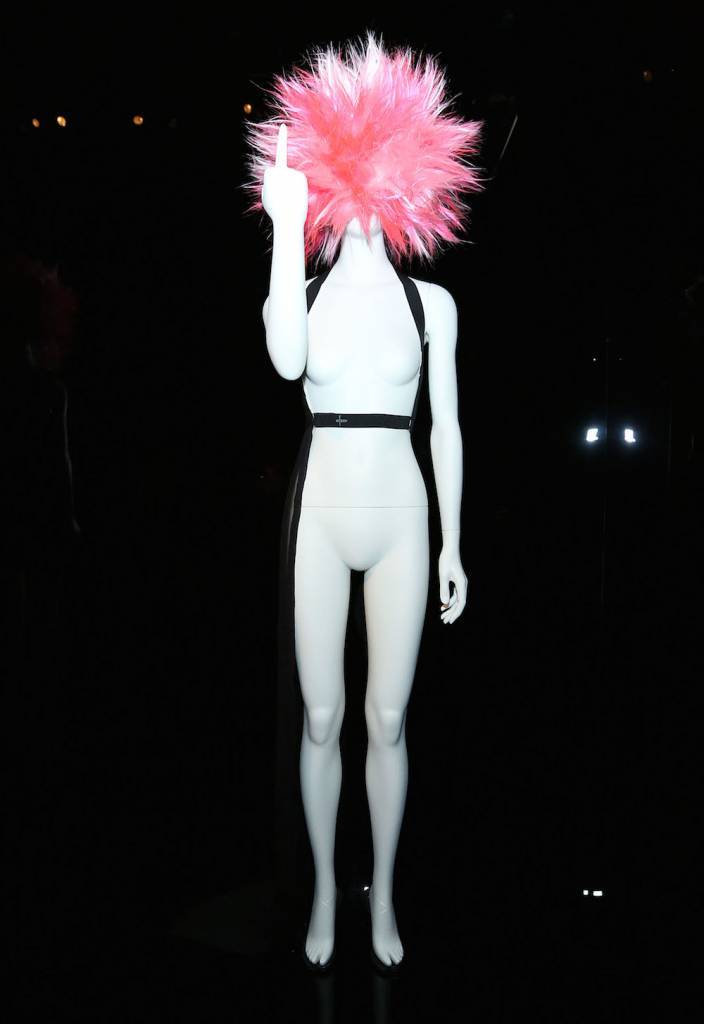 NEW YORK, NY – MAY 06: “PUNK: Chaos to Couture” Costume Institute Exhibition Press Preview at the Metropolitan Museum of Art on May 6, 2013 in New York City. (Photo by Rob Kim/Getty Images)

Effectively the museum is confirming a crucial margin of doubt as to whether a substantial number of its pieces were even made on McLaren & Westwood’s watch or under their direction. And if they were produced subsequently by others, without McLaren & Westwood’s involvement or oversight, how does the museum explain the presence of original-looking labels?

Put simply: either these 30 pieces of clothing are McLaren/Westwood originals or they are not.

Time will tell whether the exclusion of the two tartan suits marks the start of detoxification of the Costume Institute collection. For now it remains seriously tainted.