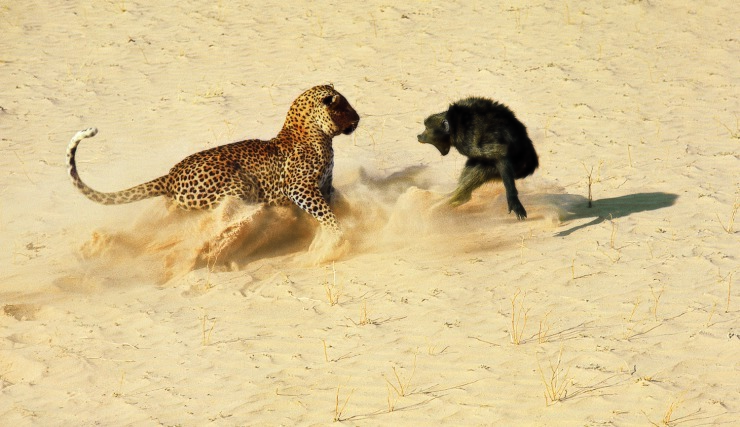 In 1966 John Dominis photographed a leopard and a baboon fighting. Had he happened upon the scene by chance? And how had the photographer gotten so close?

Dominis’ told John Loengard how he did it (via Life Photographers: What They Saw):

I had photographed some animals before [Dominis noted], though I certainly wasn’t a cat expert. Pat Hunt, the head of LIFE’s Nature department, lined up a hunter in Botswana who was a hunter for zoos. He had caught a leopard, and he put the leopard in the back of the truck, and we went out into the desert. He would release the leopard, and most of the time the leopard would chase the baboons and they would run off and climb trees. I had photographed all this. But for some reason one baboon didn’t get off. It turned and faced the leopard, and the leopard killed it. We didn’t know that this was going to happen. I just turned on the camera motor, and I got this terrific shot of this confrontation.

We were always setting up pictures of some sort . . . But now there are many, many more competent photographers doing this stuff over long periods of time—four or five years if a scientist is on a big study. They’re getting good stuff without helping the picture. But no one was working that way then. Scientists couldn’t handle the crude cameras that we had well enough to get good stuff. 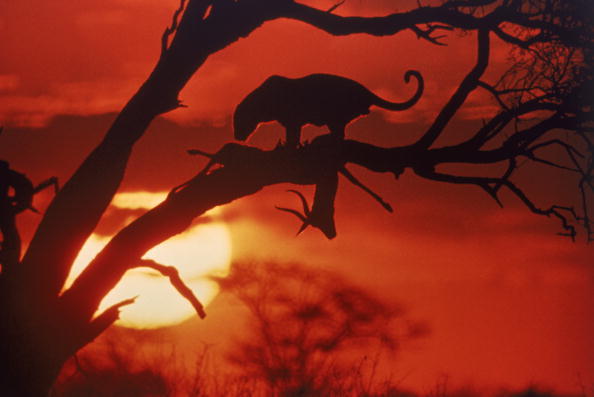 Original caption 1965 ” Setting sun Silhouettes a leopard and its kill in the branches of a tree. “

I felt that my job was to get the pictures. I learned how to bait animals and do things from the experts in Africa. We shot a gazelle and put it in a tree and waited for a cat to come. I didn’t feel bad about it at all. It sounds terrible now, I know, and maybe my attitude would be different now. But it wasn’t then, and I don’t know what more to say about it. I know, I’ve been criticized a lot. But to me, I had to do what I did.

David Attenborough, the British naturalist who has been the Voice of God in a multitude of natual history TV shows, says that getting involved is wrong:

“If I saw a little baby gazelle and a cheetah coming along about to pounce on it, if I nipped out of the Landrover and said boo to the cheetah… Well to start with it might say something quite rude to me back, but apart from that then you would have frightened the baby gazelle, and a cheetah which would perhaps go away and have to attack another baby gazelle. The little baby gazelle would be so traumatised it would be lost, so you actually make things far worse by interfering than not. If you’re a film cameraman you are trained as it were to be the observer, a non-participant. That’s very important.”

Modern technology allows you to be distant. But pictures make us, the viewers, the room’s fourth wall. You are never totally not there…