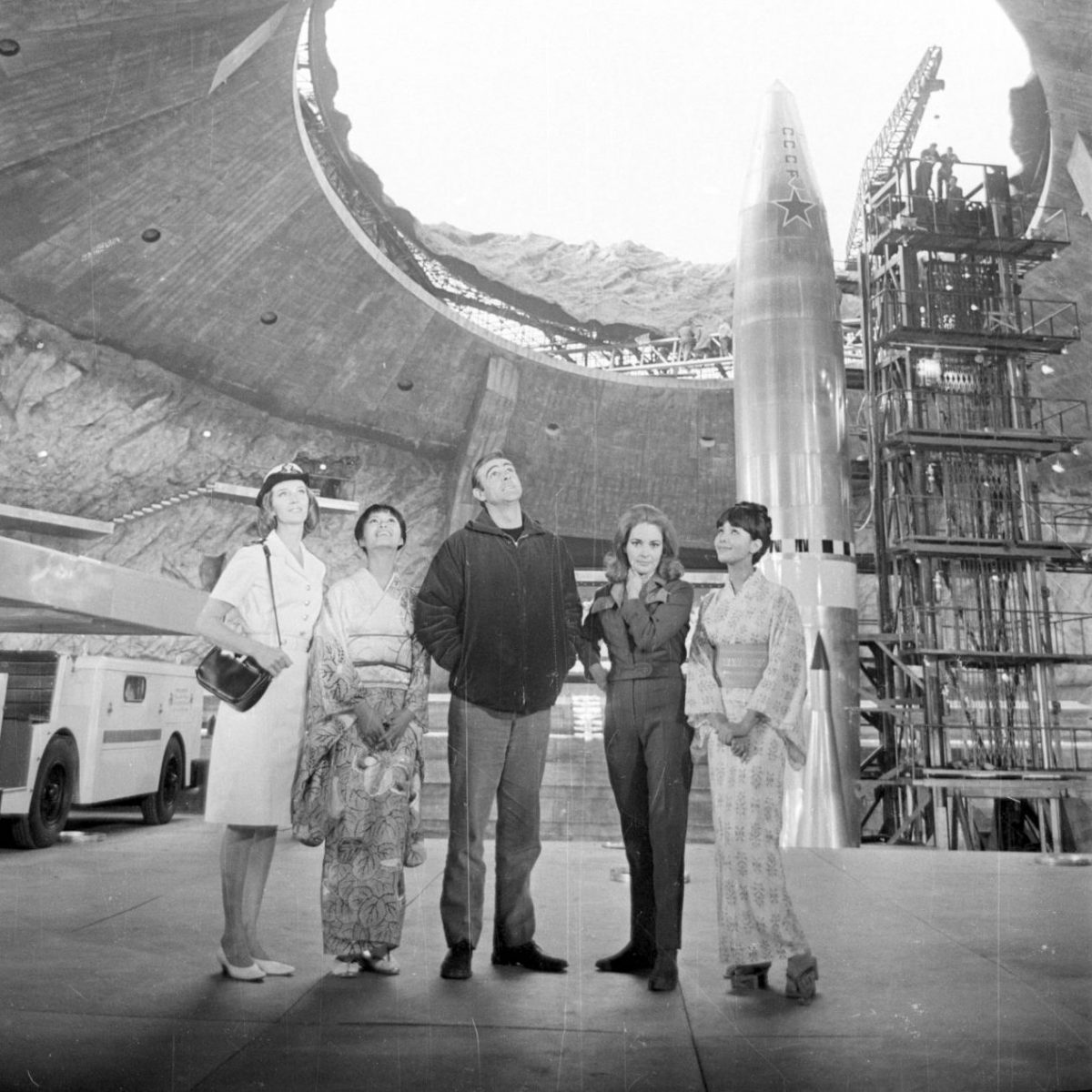 Sir Ken Adam, who went on to design so many James Bond movies including You Only Live Twice was born Klaus Adam in 1921 in Berlin and escaped to England with his Jewish family in 1934. After training to be an architect he became, apparently, the only German to fly in the wartime RAF – as a Sergeant Pilot in 609 Squadron, flying Typhoon fighter-bombers on low-level strikes across northern France,

In 1946, Adam was taken on as a  junior draftsman at Riverside Studios in Hammersmith and over the next decade he worked his way up to be one of Europe’s best film designers. He shared an Oscar nomination for Around the World in 80 Days (1956) for Art Direction/Set Decoration while his first major screen credit as production designer on the British thriller Soho Incident in 1956 (released as Spin a Dark Web in the US). 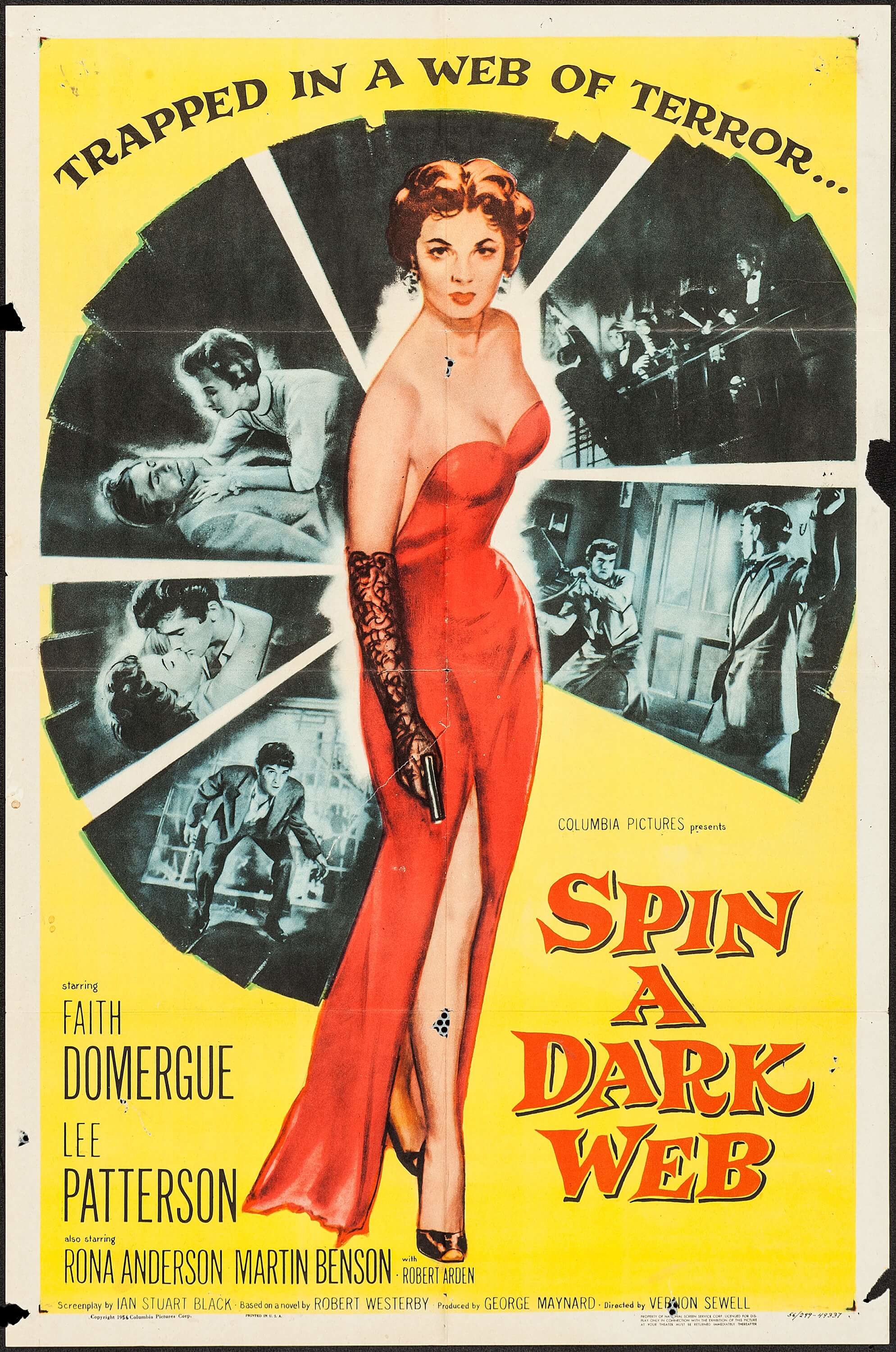 Adam worked on the first Bond film Dr No and Stanley Kubrick’s Dr. Strangelove. He then worked on the amazing and innovative sets for Goldfinger, Thunderball and You Only Live Twice. His biographer Sir Christopher Frayling once said of Adam:

About halfway through the Bond films, they were actually constructing the scripts around his sets. He is as much an author of those films as anybody. He thought his masterpiece was the war room in Dr Strangelove because it was serious. It was the sort of room where people would play poker with all of our lives. His real talent was reality with a twist.

He later won an Oscar for the extraordinary production design for Kubrick’s Barry Lyndon and in the Madness of King George most importantly of all designed the Chitty Chitty Bang Bang car. 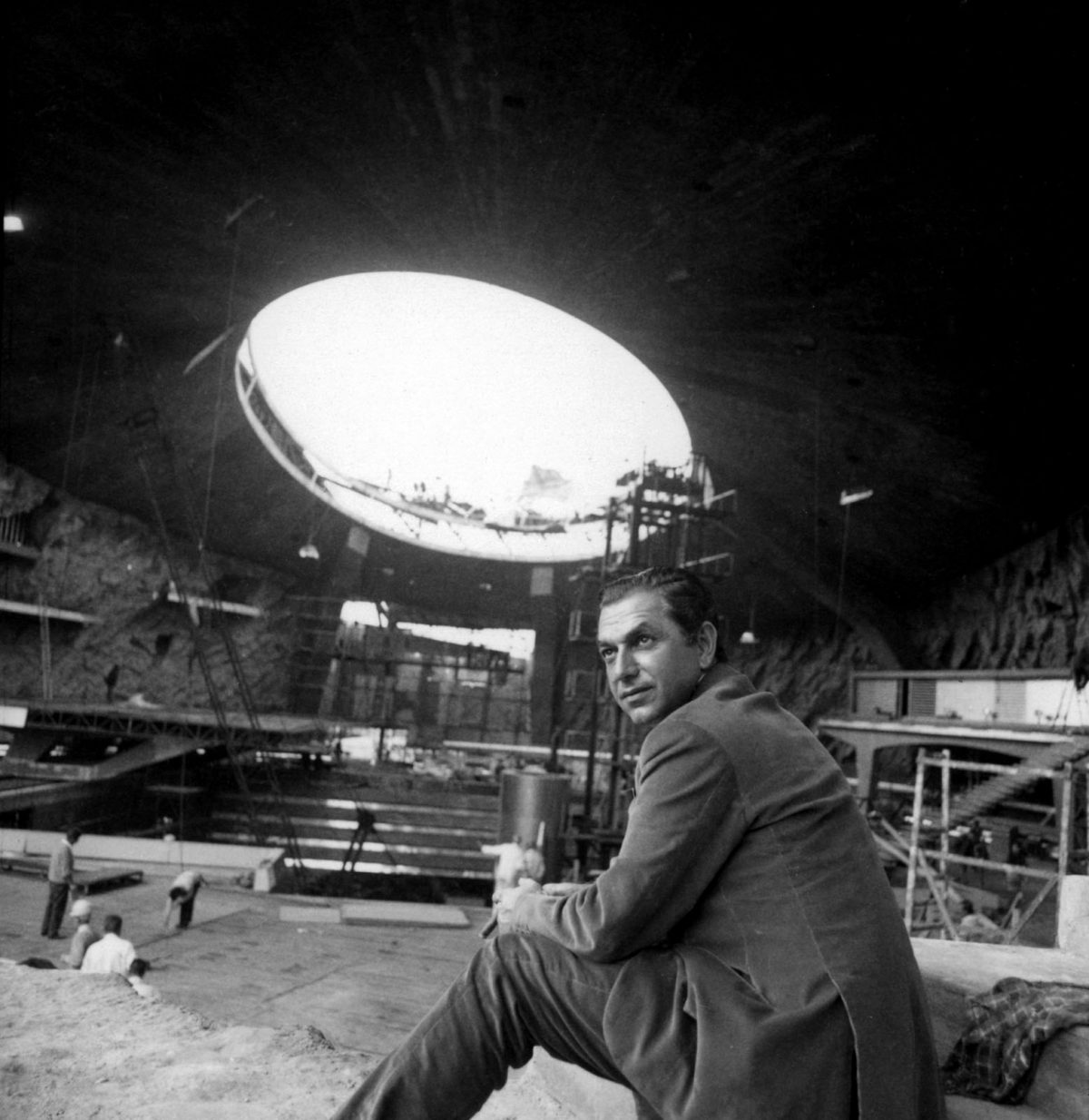 Visionary Ken Adam on the set of You Only Live Twice, 1967

THE WAR ROOM CONFERENCE DR. STRANGELOVE: HOW I LEARNED TO STOP WORRYING AND LOVE THE BOMB (1964) 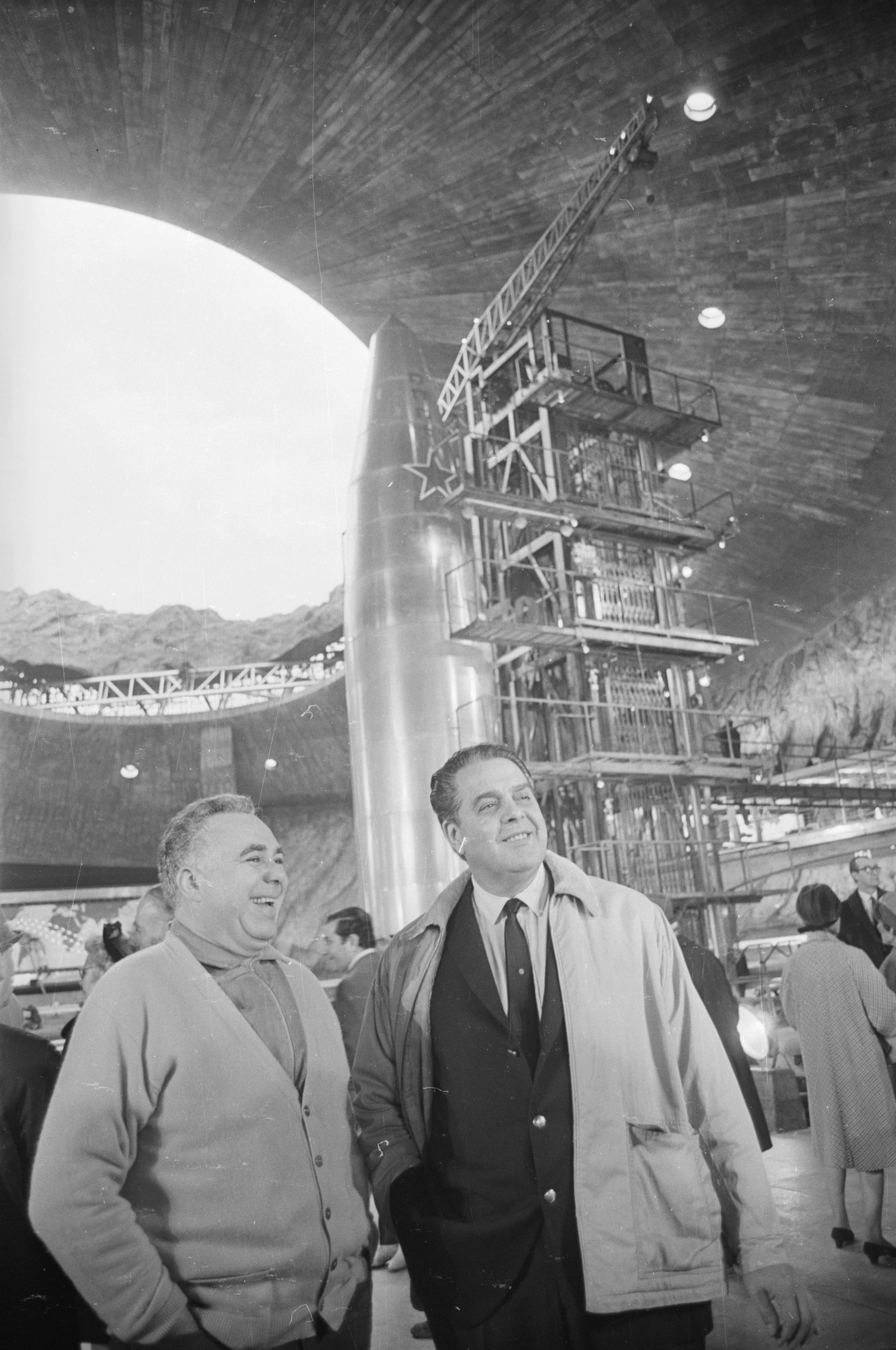 In conversation with Todd Longwell, Ken talked about the challenges building the You Only Live Twice set:

We were desperate because we had covered about two thirds of Japan and we were looking for some of the locations that Fleming had mentioned, and of course they didn’t exist. We went in two helicopters and on one of the last days on the Southern island of Kyushu we found this area of volcanoes and that triggered a lot of ideas. It was decided that it would be interesting to have the villain inside the crater. So then I came up with this design concept, and I’ll never forget [Bond producer] Cubby Broccoli asking me how much it was going to cost. I had no idea, obviously. And he said, “Well, will a million dollars be enough?” And I said, “Sure.” [laughs] A million dollars in 1966 was a fortune! But then my worries started, you know. Once he had agreed, I said, “Well, can I do it for a million dollars?”

Also, they were in trouble. In those days already, those Bond films had a release date in about 3000-4000 cinemas, and we didn’t have a script! And this was the first glimmer we had of something visually exciting happening. So he felt, I suppose, a million dollars would be a reasonable expenditure if I come up with a really exciting concept…

If someone does a skyscraper, it’s very easy to calculate, but I come up with a sliding lake of fiberglass 120 feet up on an inclination that was held by one cable, and nobody quite knew if it was going to work. And I realize that if something goes wrong, I’ll never work in film again. I had a lot of nervous moments. 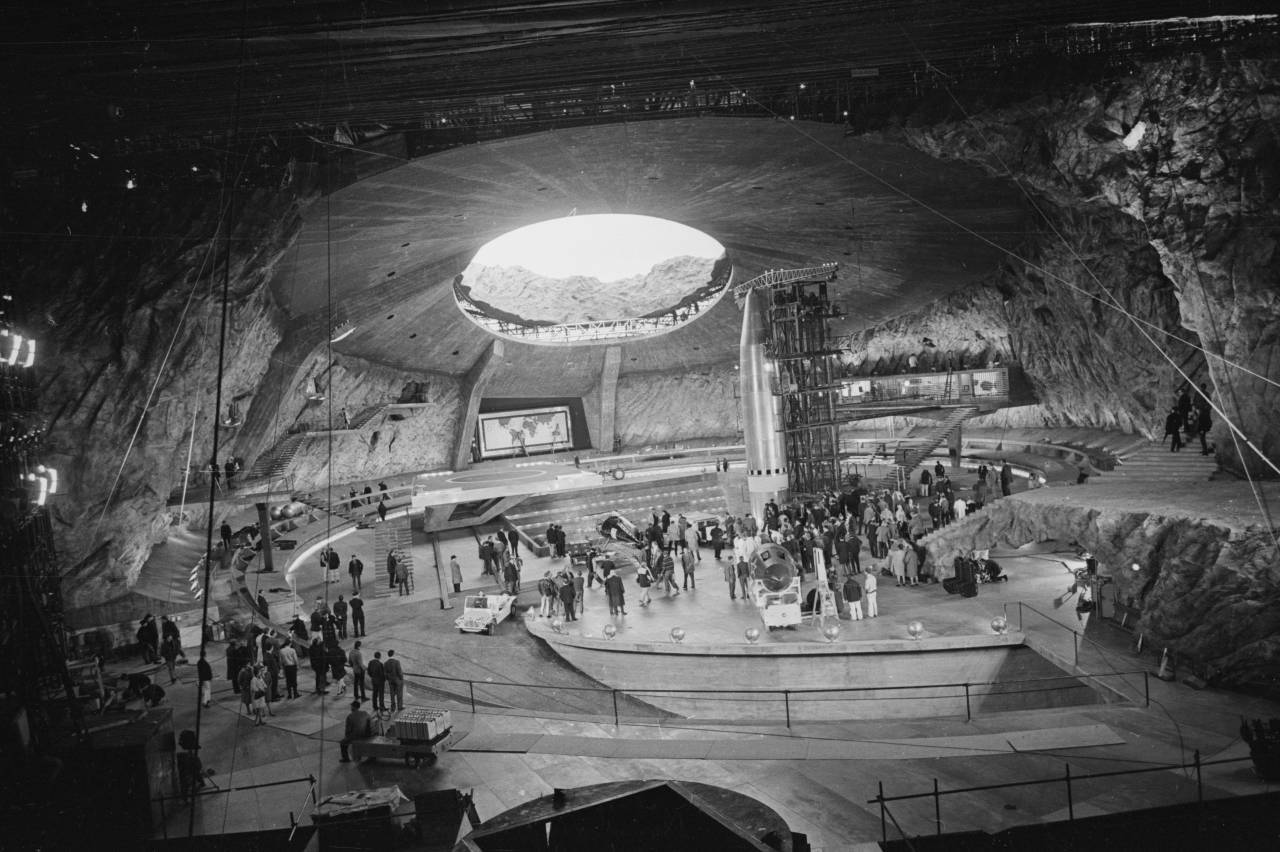 28th October 1966: The massive purpose-built set of the new Bond film ‘You Only Live Twice’ at Pinewood Studios. (Photo by Larry Ellis/Express/Getty Images) 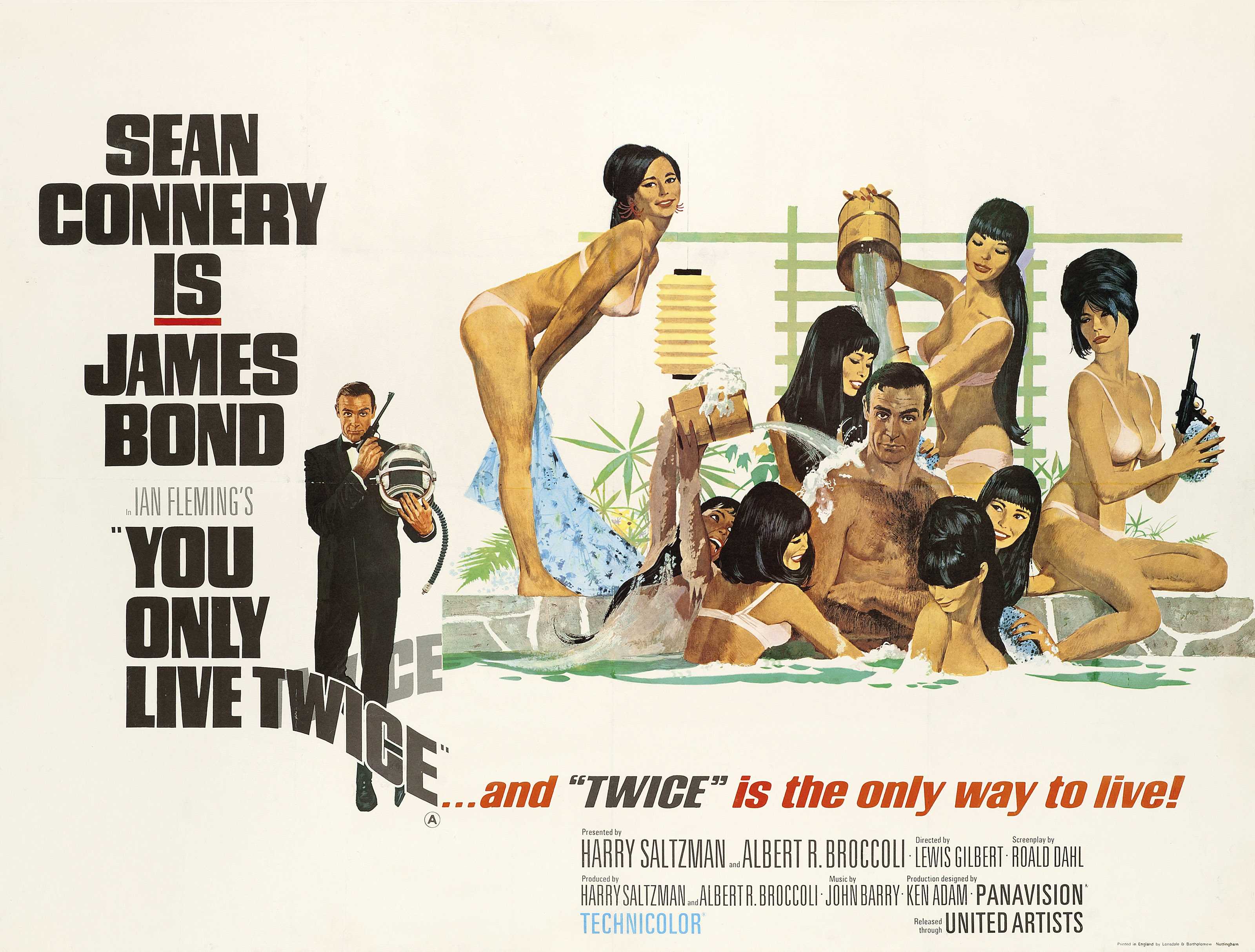 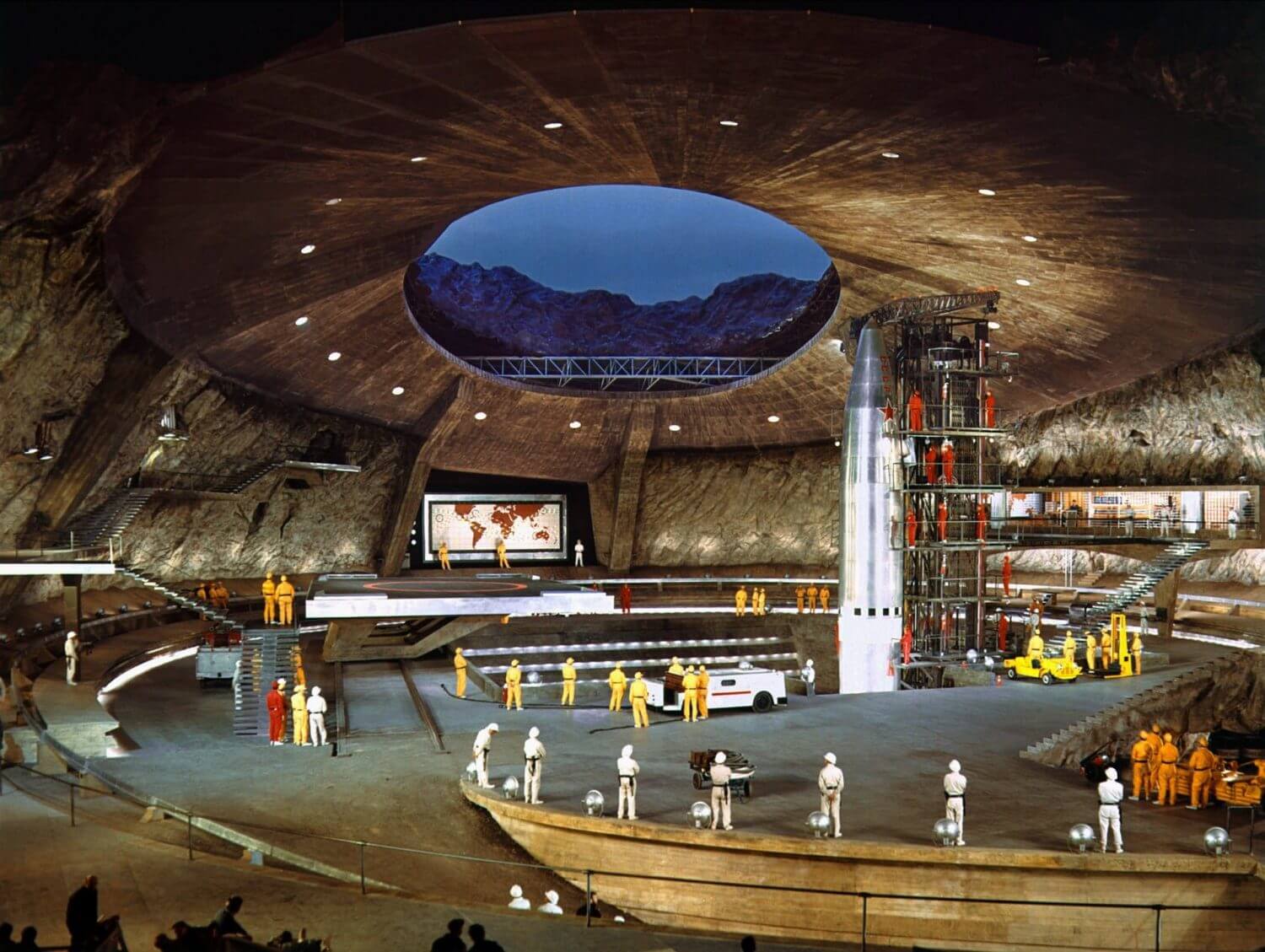 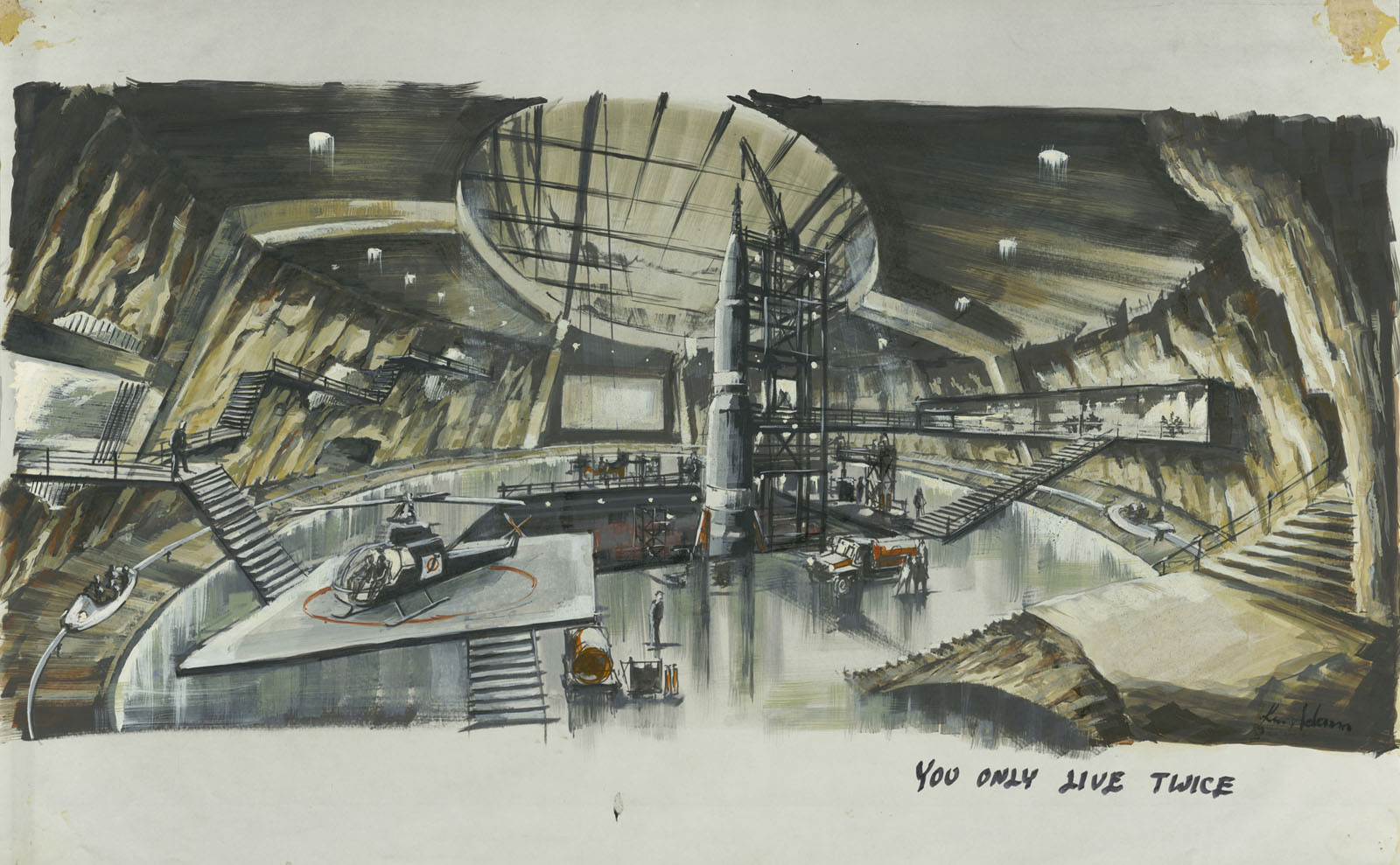 Ken Adam’s drawing of the You Only Live Twice set 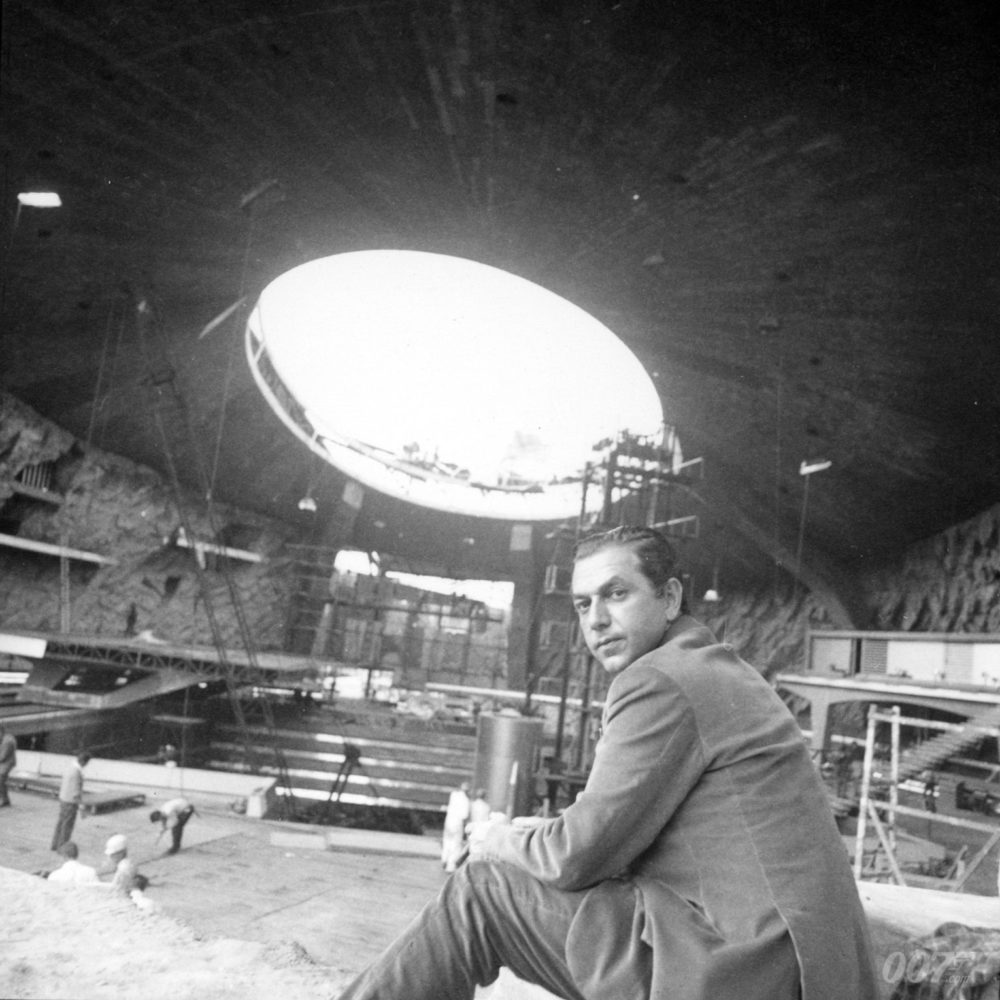 Ken Adam on the set of You Only Live Twice 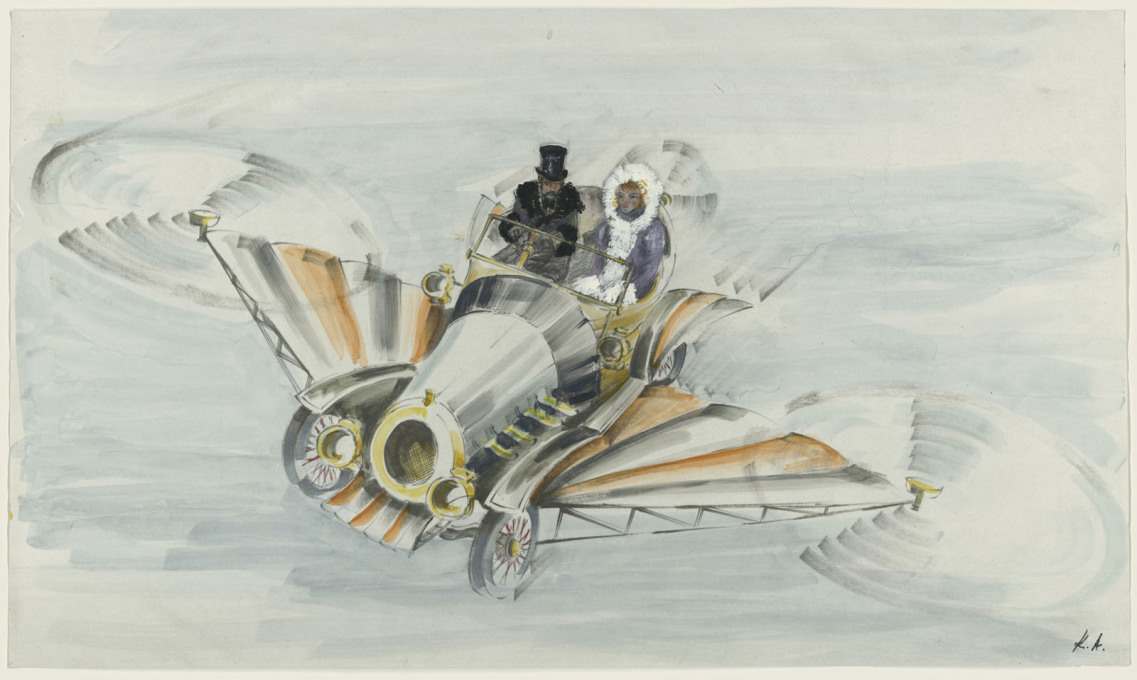 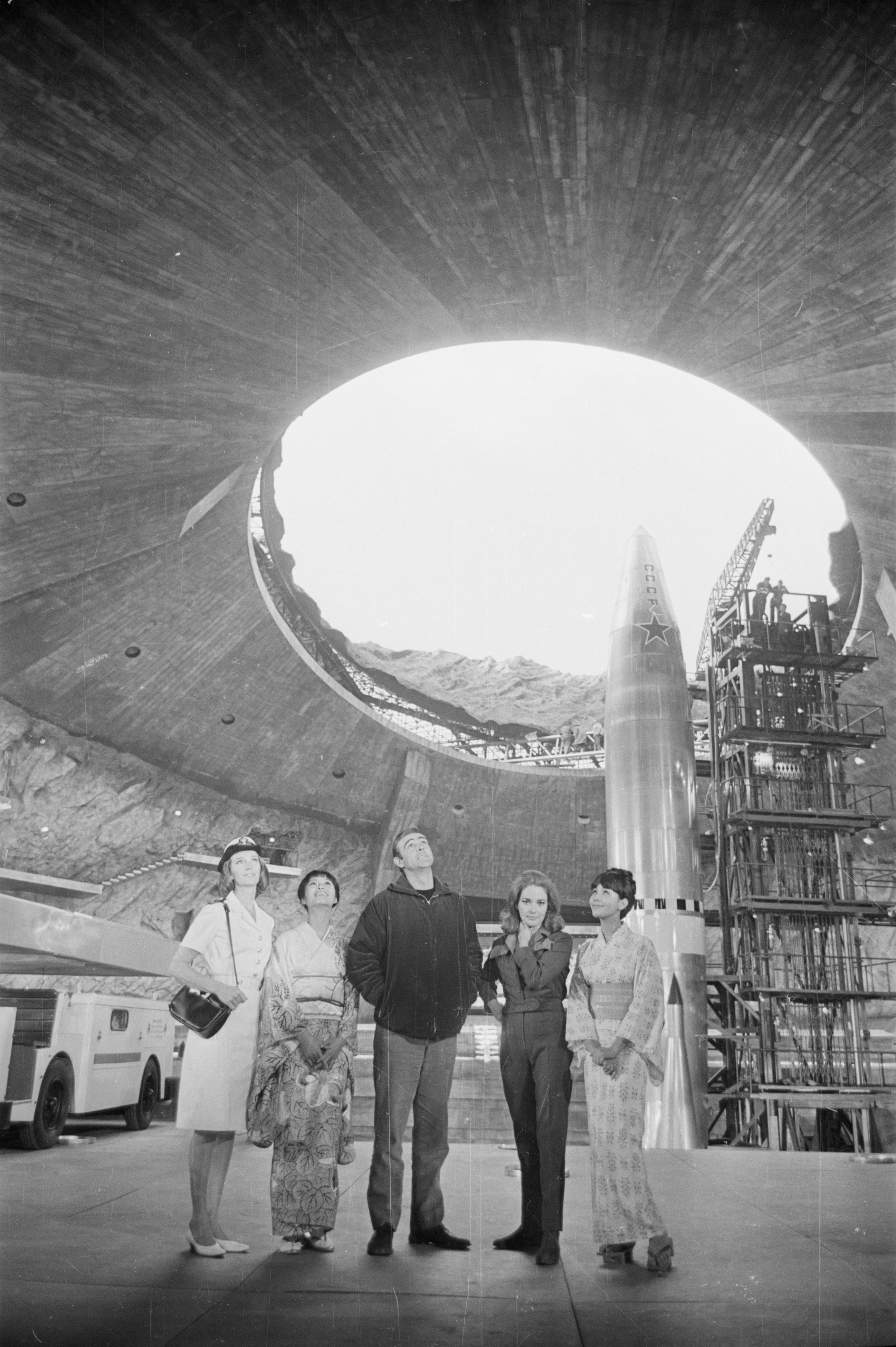