With mixed success, property developers and estate agents have often attempted to change the name of an unfashionable area of London to make it sound more sophisticated. A relatively recent example is ‘Midtown’ for the part of central London called Holborn – a perfectly good name for most Londoners since around the year 960 when King Edgar the Peaceable wrote of an old wooden church, ‘St Andrew in Holborn’, on a hill above the river Fleet.

Another example is the area north of the eastern end of Oxford Street. Historically it was always considered part of Soho and often called north Soho but after the Second World War it increasingly became known as Fitzrovia. It was first used in print in 1940 by the Labour MP and journalist Tom Driberg and probably named after the Fitzroy Tavern. Local residents and business owners quickly took up the name, more than happy to disassociate themselves from a disreputable Soho.

Another successful name change was King’s Cross once a none-too-pleasant area of the capital known as Battle Bridge and named after the ancient crossing of the Fleet River close to the Gray’s Inn Road. It had long been an unsavoury place – ‘a haunt of thieves and murderers’ and close to dust-heaps, brick-fields, a Smallpox hospital and the often flooded banks of a noxious River Fleet. The King in King’s Cross is George IV but when he died in June 1830 few tears were shed. Even by the time of his accession ten years previously much of the population already considered the notorious spendthrift as a rather preposterous and deplorable figure. But he had been the King and it was decided to build a monument for him paid by public subscription. Designed by Stephen Geary, also responsible for the Highgate Cemetery, it consisted of a statue of the former monarch supported by the patron saints of England, Scotland, Wales and Ireland. The figure of the King was ignominiously removed after only six years in 1842 while the basement room of the monument, initially a police station, then an exhibition room complete with a camera obscura and finally a beer-shop, was demolished three years later. 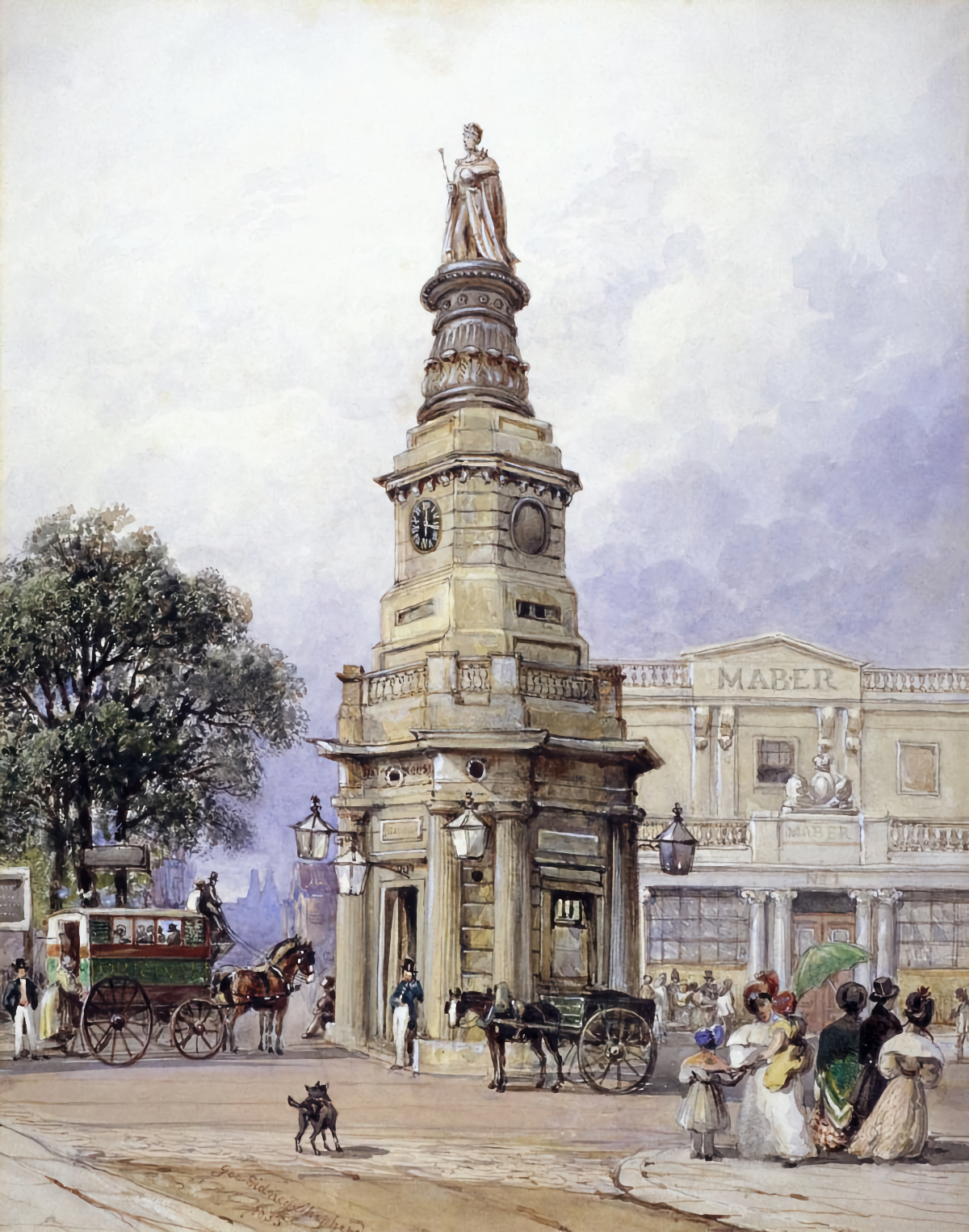 View of the octagonal monument to King George IV at Battle Bridge, London, 1835. The monument was erected in 1836 and the area of Battle Bridge was subsequently re-named King’s Cross. 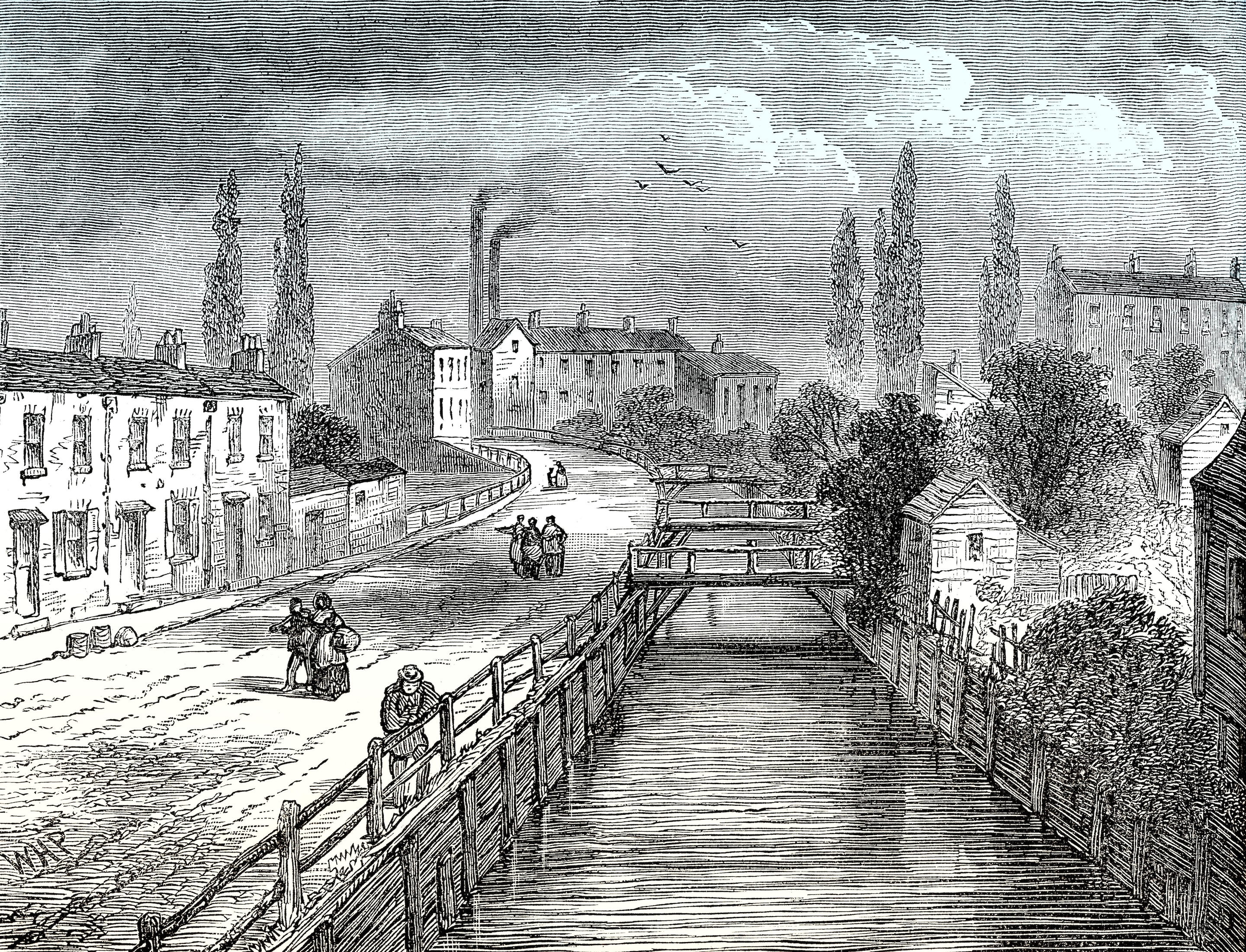 The Great Northern Railway reached London in 1850 after a ‘final push’ to take advantage of visitors to the Great Exhibition the following year. Those in charge decided to name the station not Battle Bridge, a name that had been used for hundreds of years, but after a monument for an unpopular former King that had already been demolished. It wasn’t all that surprising. The Fleet river which in Edgar the Peaceable’s time was a hundred metres wide where it met the Thames had been covered in sections from 1732 by which time it was nothing much more than a large open sewer. Pollution from dead animals, excrement and butchery scraps led to a build-up of gaseous effluence which in 1846 led to a massive explosion causing flows of raw sewage to flow through the streets.

When King’s Cross station opened on 14th October 1852 the building was greatly admired but in an era famed for the opposite the station was as practical and lacking of superfluous ornament as the locomotives it was made to house. The pair of ‘yawning train sheds’ were held up by laminated timber beams and not the steel girders which replaced them in the late 19th Century. It’s possible to see how these laminated wooden beams may have looked by visiting the nearby German Gymnasium restaurant and bar [https://www.germangymnasium.com]. Built in 1864-5 for the German Gymnastic Society it was the first purpose-built gymnasium in the country and hosted fencing, weightlifting and boxing but also the less well known sports of Indian Club Swinging and Broadsword practice. In 1913 while he was living in Notting Hill and nine years before he was ambushed and murdered in Ireland by Anti-Treaty Republicans, Michael Collins signed up with the Irish Republican Brotherhood. He formed a Volunteer Unit in London that drilled each week at the German Gymnasium using broom-sticks and, if lucky, reconditioned Martini-Henry sawn-off rifles. When World War One broke out the Gymnasium was immediately closed down and before opening as a restaurant just over a hundred years later it had been a ticket office, part of the council, an art gallery and a conference centre with a false floor and ceiling. 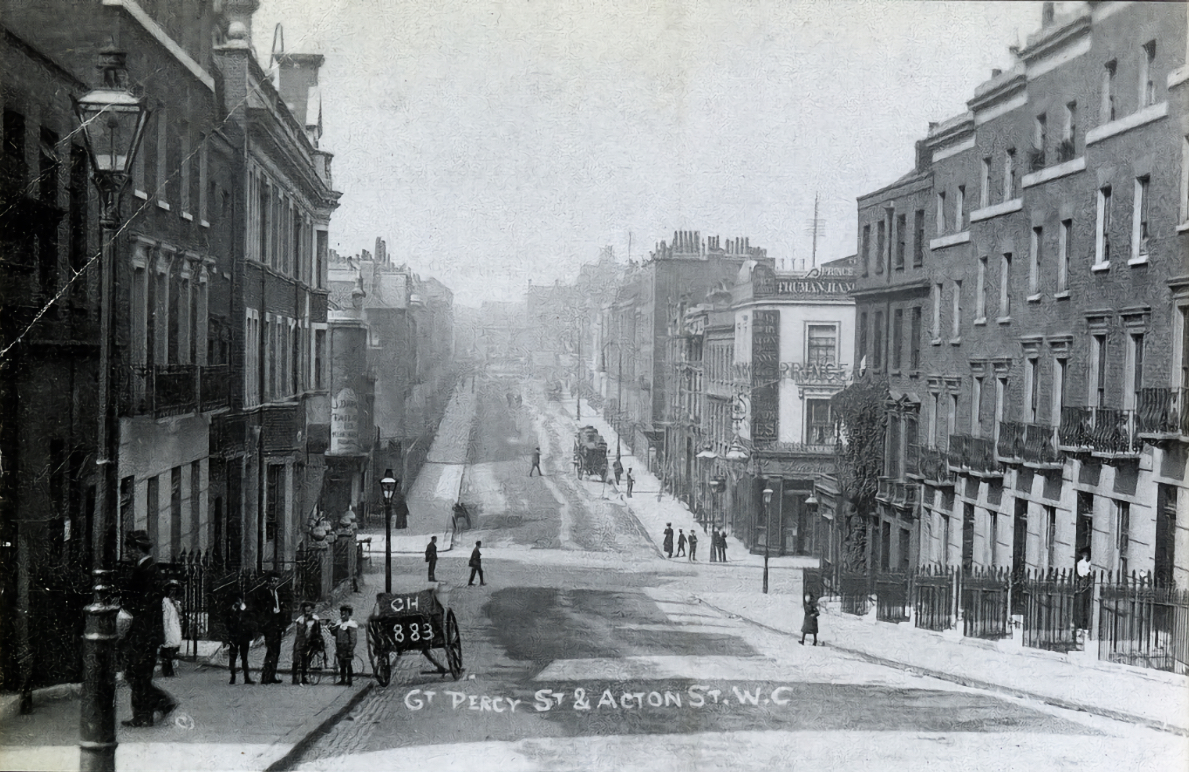 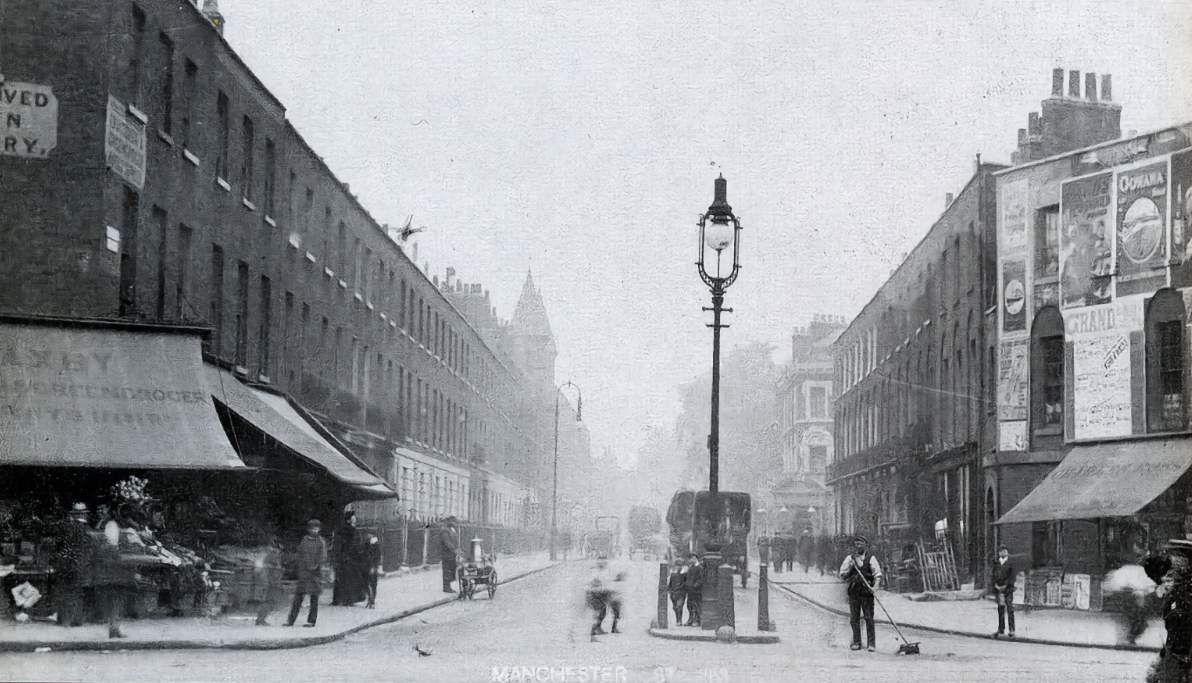 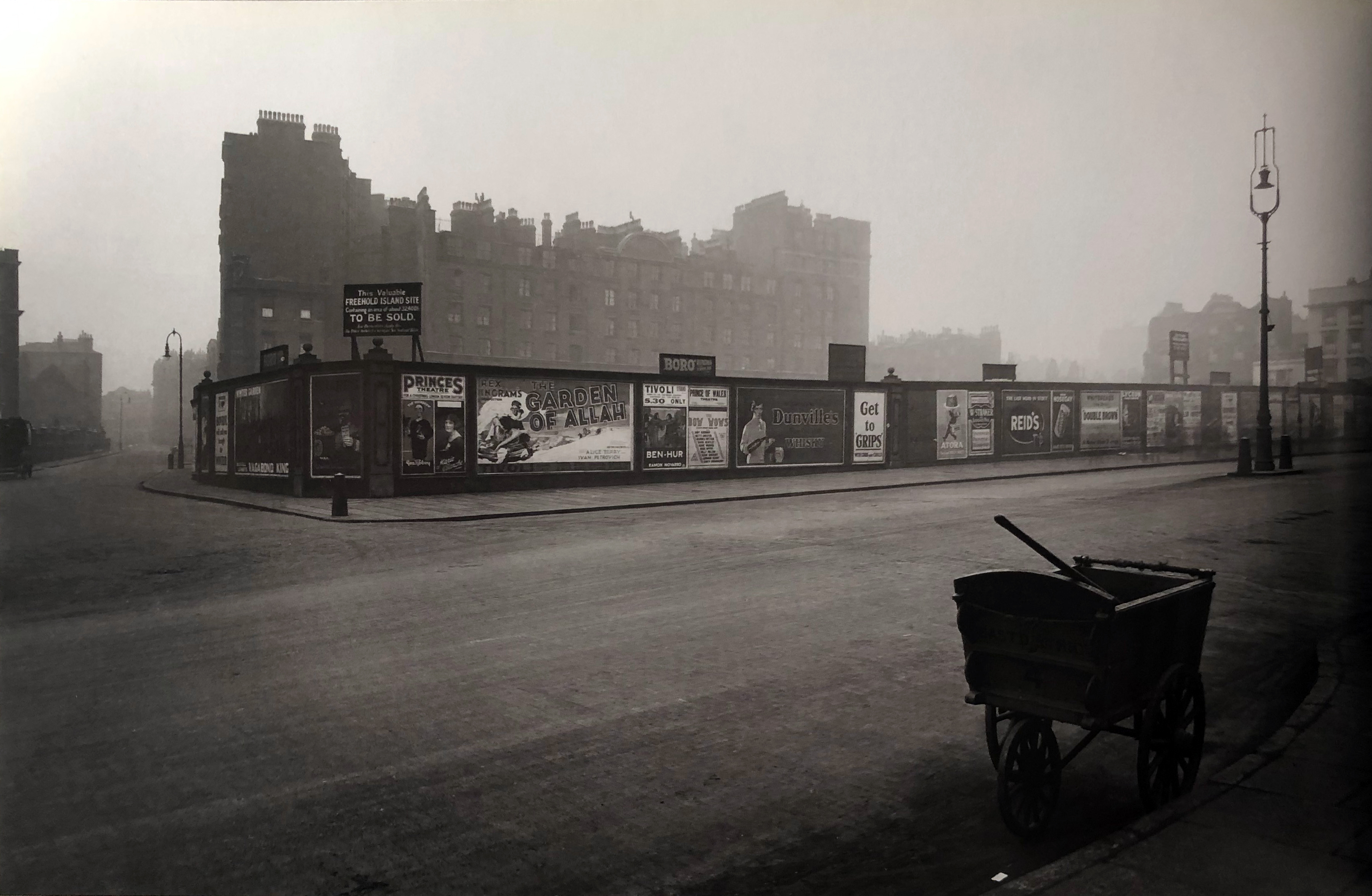 South side of the Euston Road, Kings Cross 1928 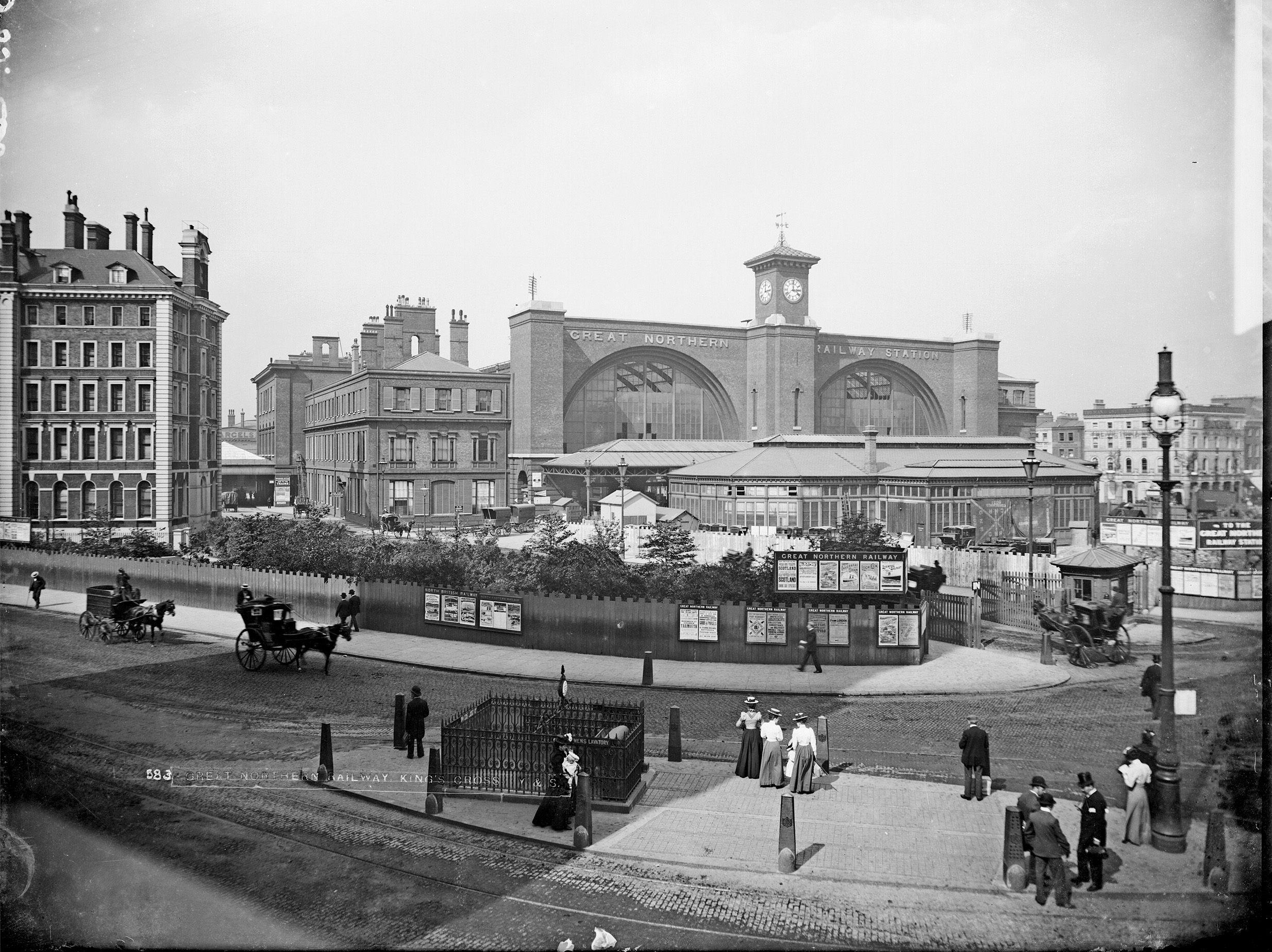 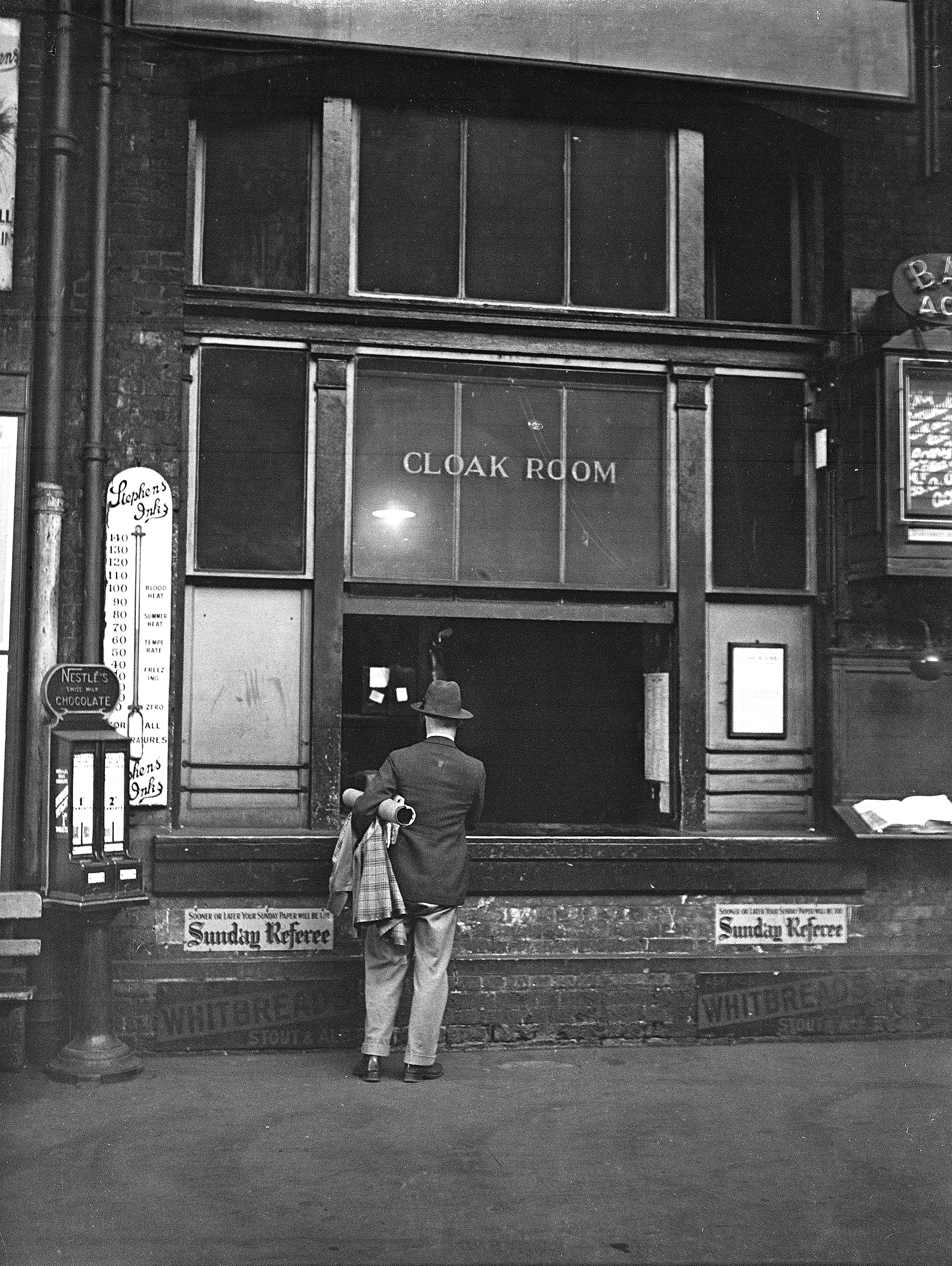 A man stands outside King’s Cross station cloakroom, London, England, Tuesday, June. 19, 1934. It was at this location that a suitcase containing a pair of legs was discovered. Mysteriously, the dismembered body of a woman was also found at Brighton railway station.

Despite once being the largest railway station in Britain King’s Cross originally had only two platforms (one for departures the other for arrivals) situated along the west and east walls. There are twelve platforms these days but for many people around the world King’s Cross is perhaps most famous for a platform that doesn’t exist. Although the station has put up a sign for J.K. Rowling’s fictional Platform 9 3/4 where Harry Potter boards the train for Hogwarts, the author got the location wrong, once admitting: “I was living in Manchester, and I wrongly visualised the platforms, and I was actually thinking of Euston”.  To add more confusion the adjacent St Pancras station is used in the place of Kings Cross in the Harry Potter film Chamber of Secrets.

It’s not just the Harry Potter movies that are associated with King’s Cross the 1955 Ealing comedy The Ladykillers starring Alec Guinness and a young Peter Sellers was based around the famous train station. The movie is set around the King’s Cross home of an elderly lady called Mrs Wilberforce the exterior shots of which were filmed outside the Wardonia Hotel on Argyle Street. The wages snatch featured in the movie was filmed at Cheney Street and the getaway car was left on Field Street just south of the station. King’s Cross had long been associated with villains and not just the celluloid variety. Despite the name change the disreputable notoriety of the district had remained since the days of Battle Bridge. Born on Copenhagen Street, a long road just north of King’s Cross, Alfred Henry White known as Big Alf White was one of the most cruel and violent London gangsters between the wars. In June 1936, after a running battle at Lewes racecourse Alf White’s family and their Hoxton and Islington allies set out to attack the infamous Sabini gang. After many arrests there came a truce. The Sabinis would have the West End while the Whites had the King’s Cross area and became known as the Kings Cross Gang. Incidentally Graham Greene who for a short while lived in Mecklenburg Square just south of Kings Cross Station, based the gangster Colleoni (a character in his book Brighton Rock published two years after the Lewes racecourse fight) on Darby Sabini the leader of the Sabinis. Alf White died in 1942 but had held court in the Bell pub on Pentonville Road where he led his followers with strict discipline even forbidding swearing in his presence. The pub still exists although it has also had a name change, perhaps to rid itself of its distasteful past. Whether Big Alf would still hold court in a place called the Big Chill Bar [https://bigchillbar.com] – we will never know. 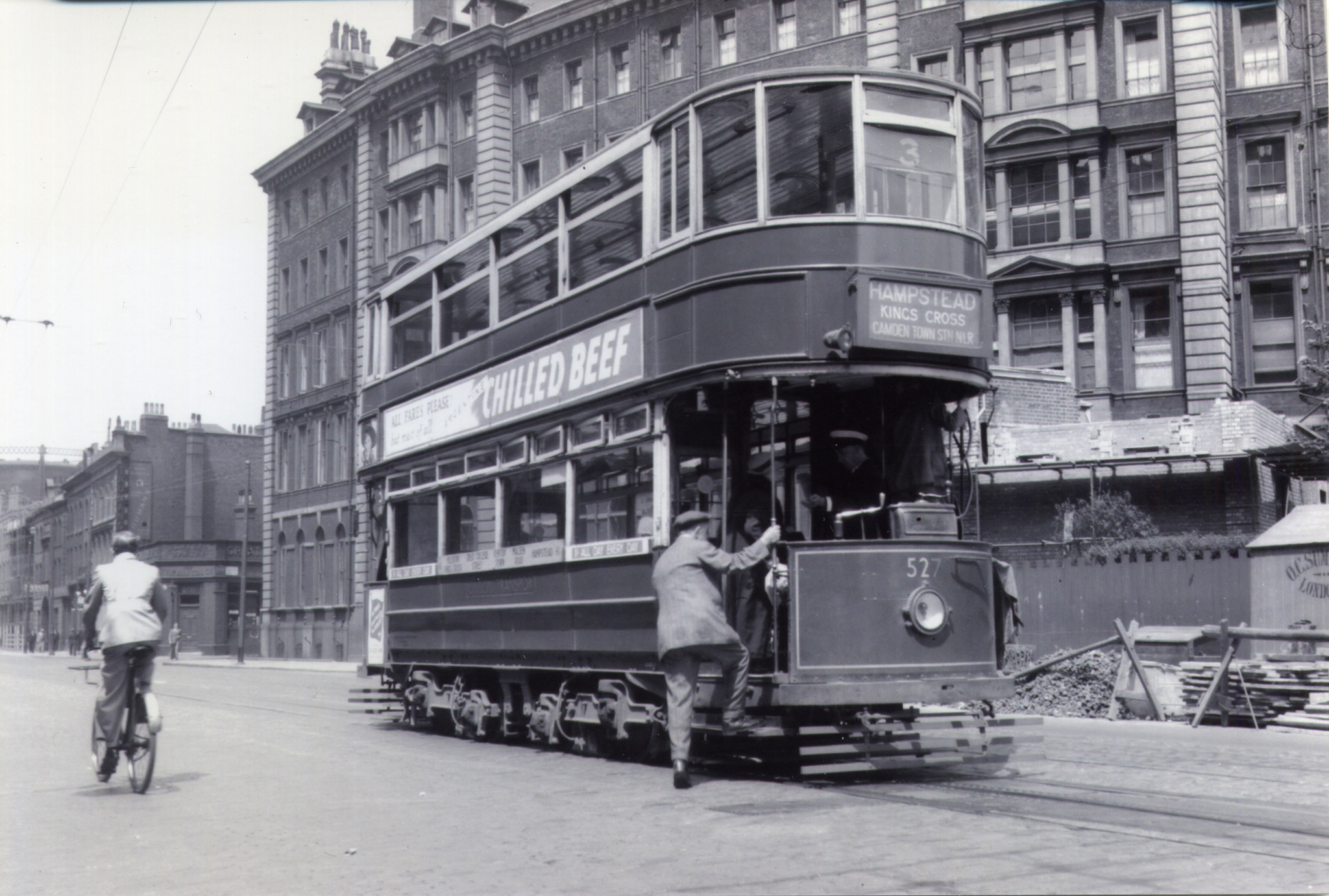 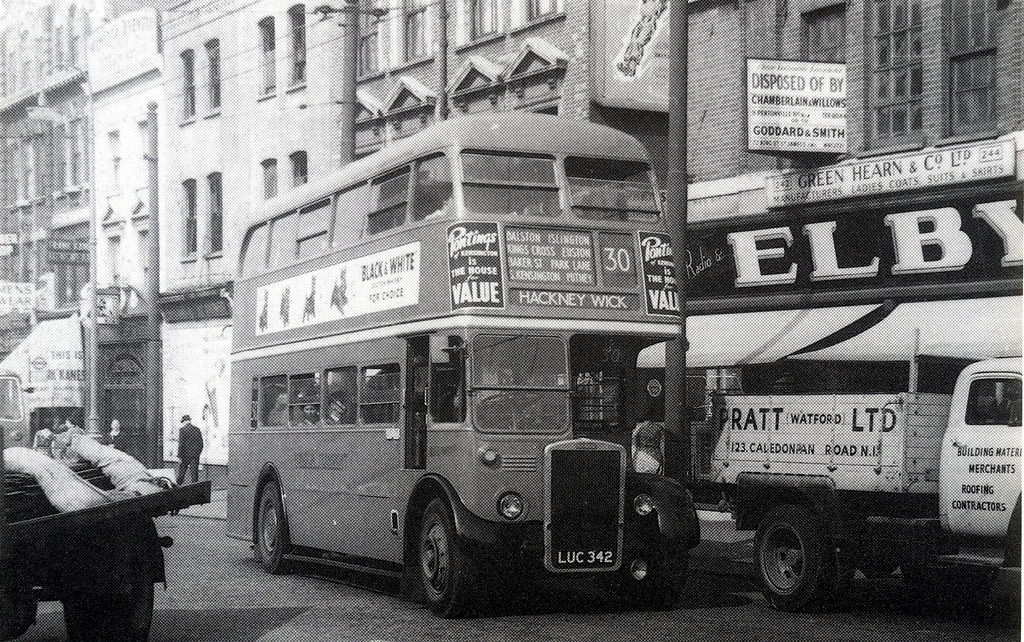 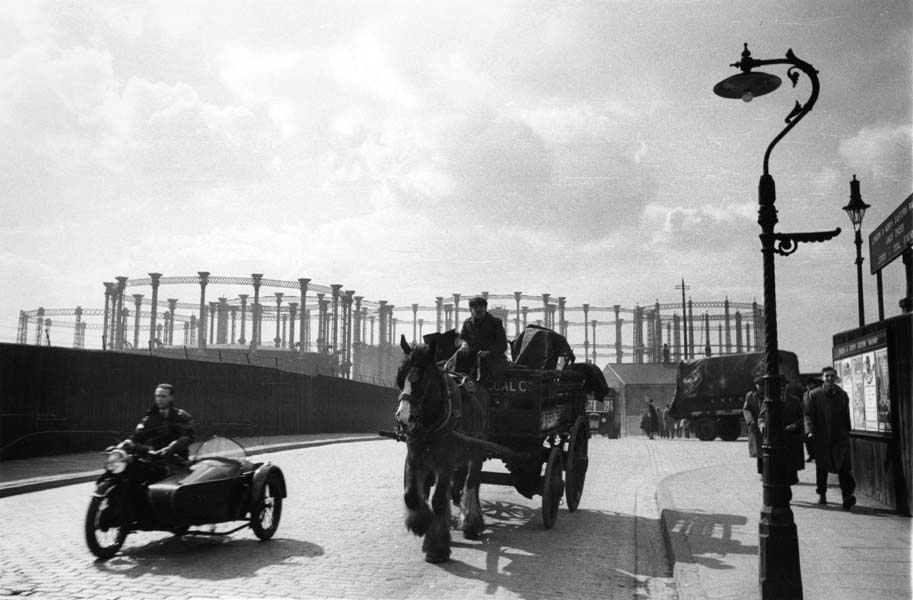 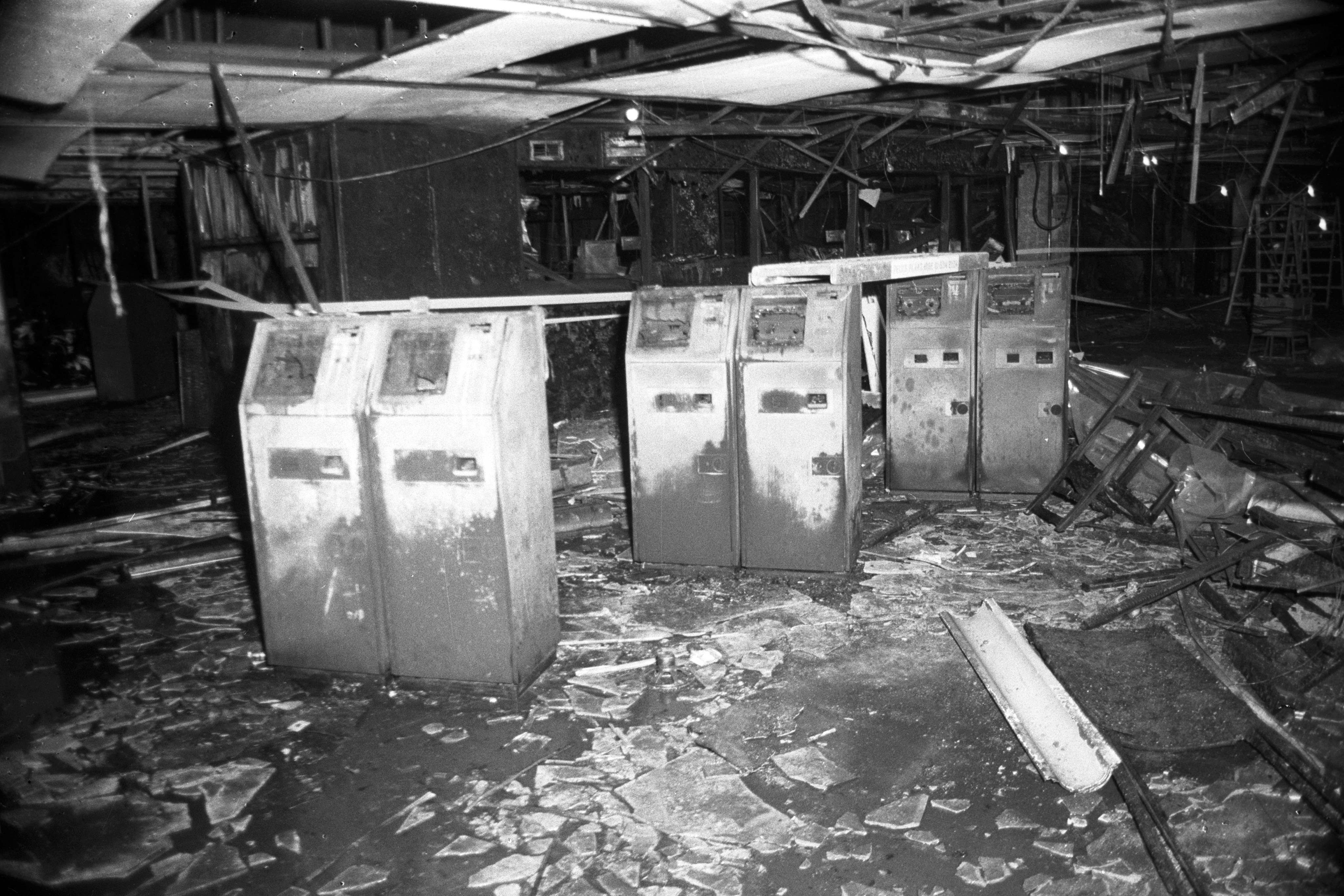 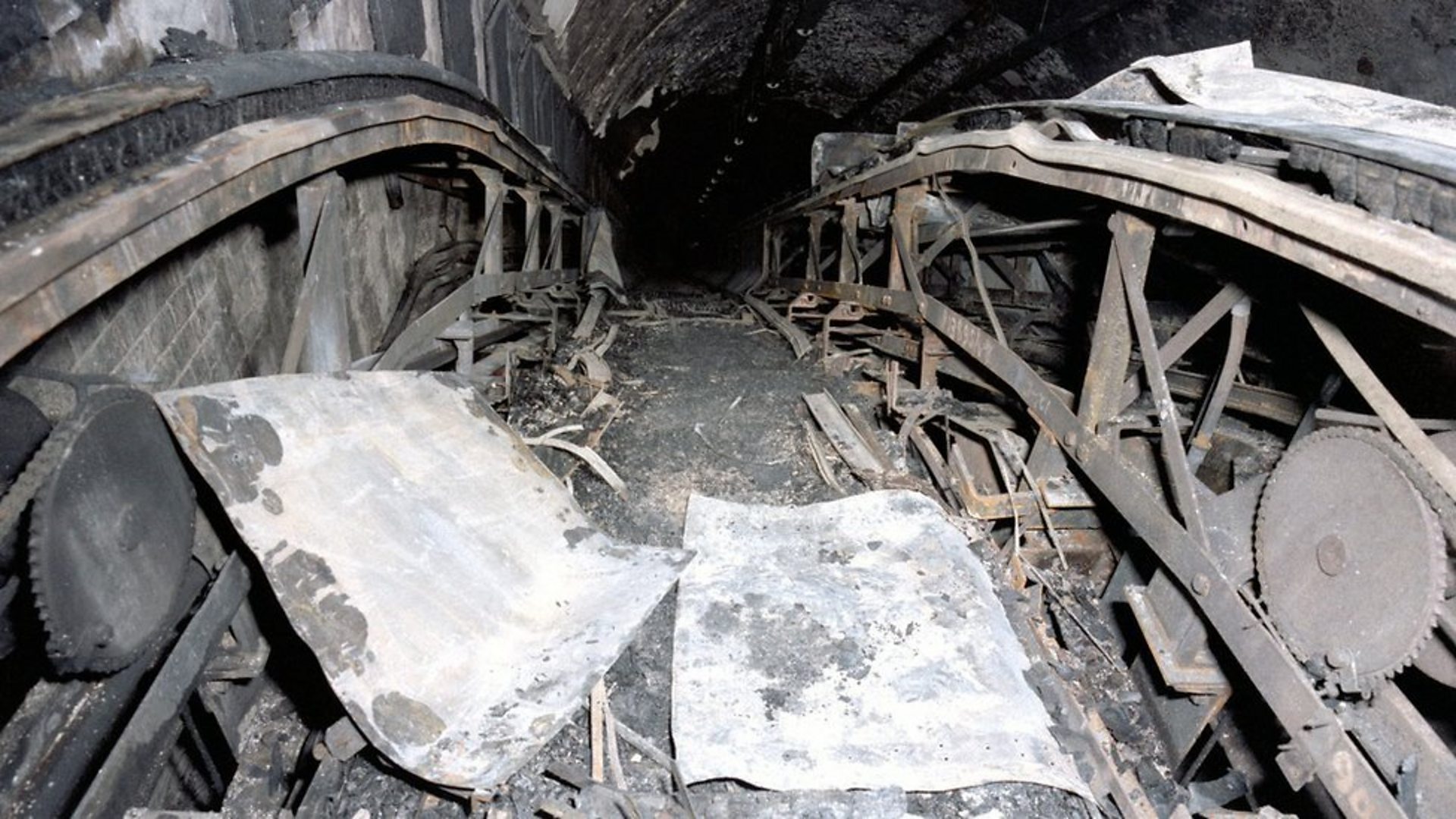 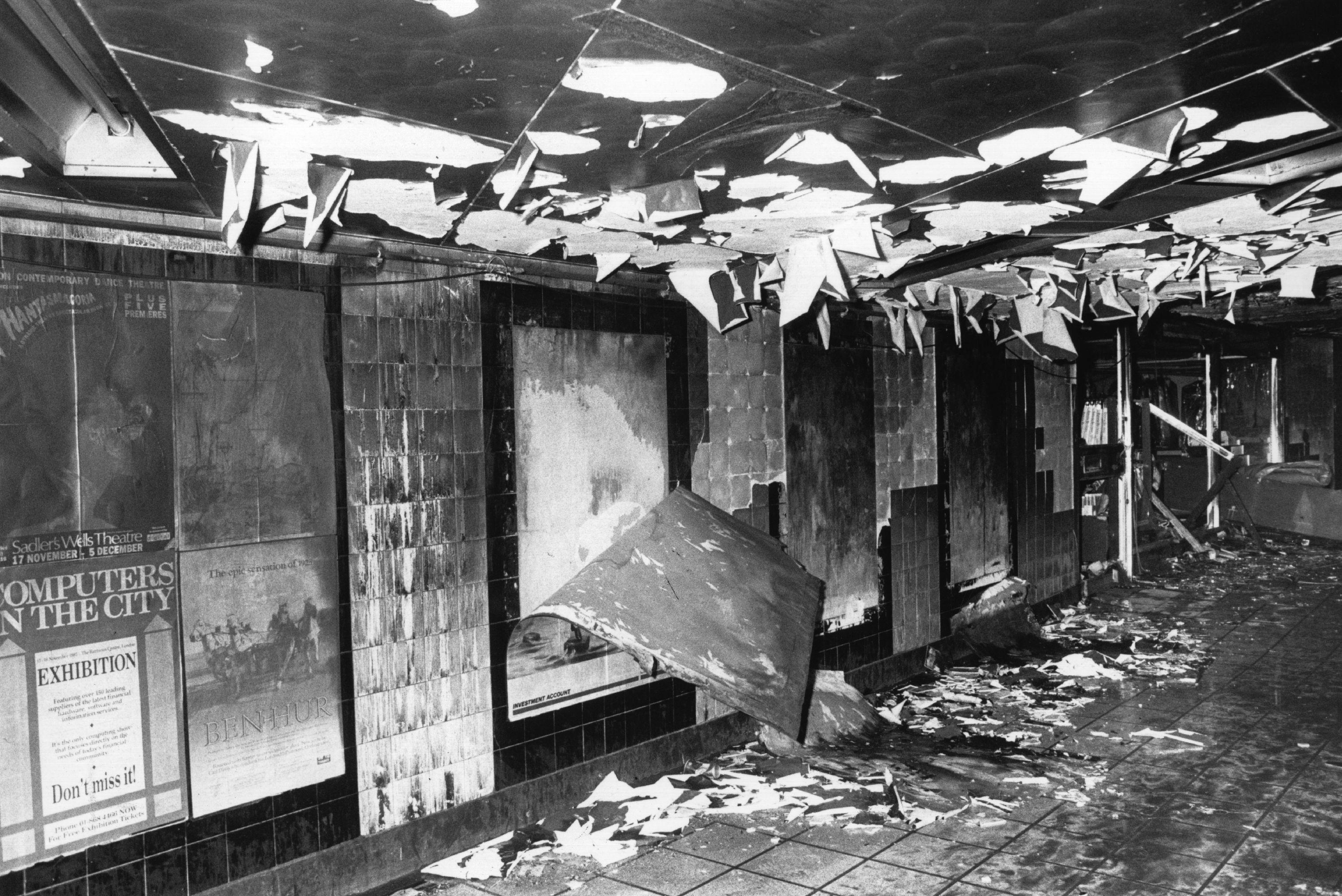 Over the years there have been several fires at King’s Cross, some so large that contemporary newspapers reported skies above north London being lit red for hours. During the worst fire of them all in 1987 there were no illuminated skies because it happened underground. Since 1985 after a fire at Oxford Circus, there had been a ban on smoking on the London Underground trains and platforms but incredibly it was still permissible to smoke elsewhere in the stations. On 18 November during the evening rush-hour someone probably dropped a lit match on one of the wooden escalators serving the Piccadilly Line. Soon a small fire developed in the oily fluff that had built up over the years but without warning it erupted into a flashover in the underground ticket hall killing 31 people and injuring 100. It brought home the awful run-down state of London Underground but also the general shabbiness of the whole city. It took a generation, and many have decried it as gentrification but over thirty years or so London has undoubtedly changed and in many ways has become a smarter, cleaner and better run city. The regeneration around King’s Cross encapsulates this. 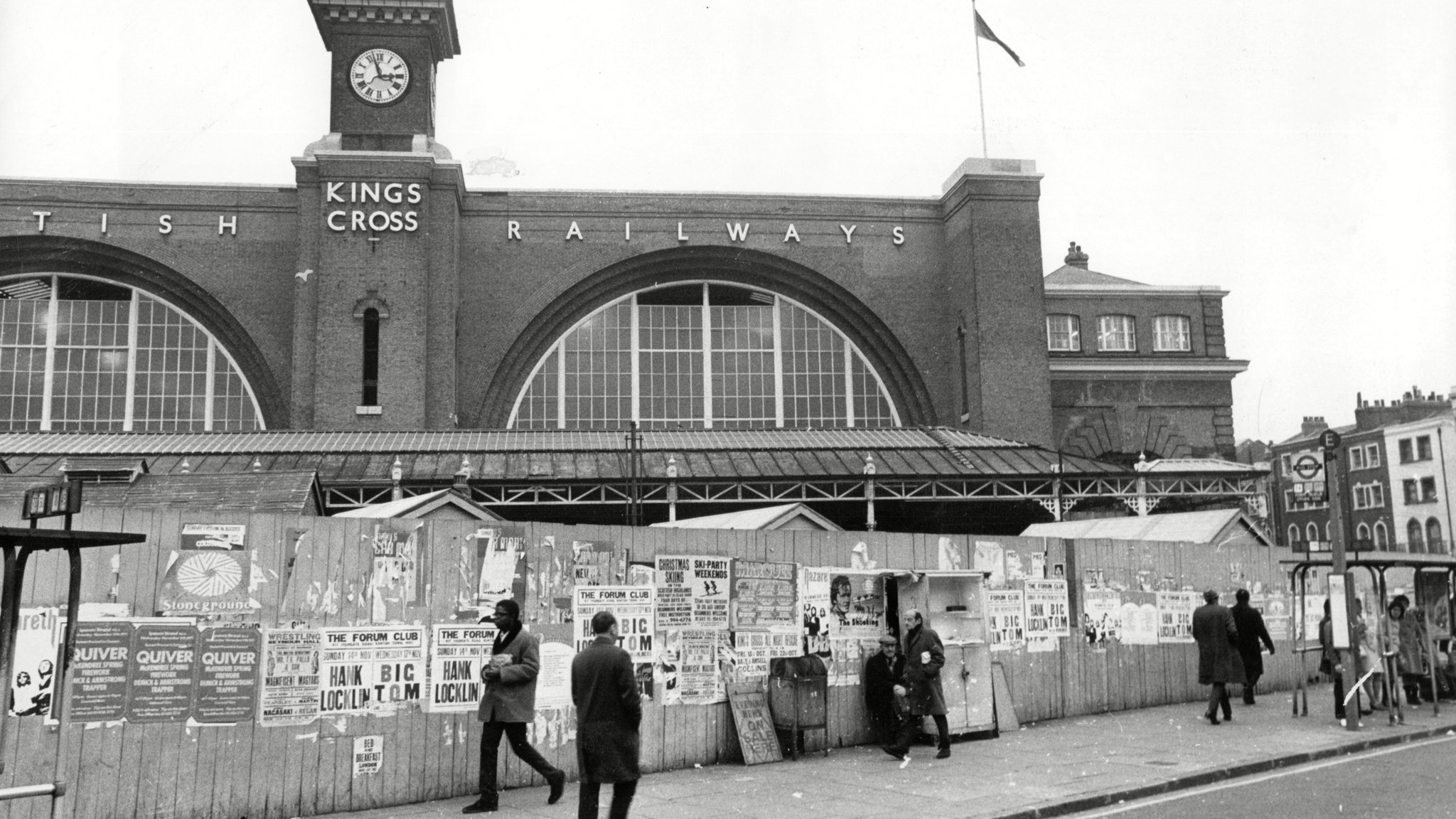 The King’s Cross renovations have also enabled the adjacent St Pancras Station (now the London terminus of the Eurostar) along with Sir George Gilbert Scott’s extraordinary Neo-gothic red-brick Midland Grand Hotel to be given the respect they deserve. If the functional simplicity of King’s Cross station goes against our idea of typical Victorian architecture the hotel built in front of St Pancras station certainly doesn’t. Famous for its monumental Gothic façade, it is one of the most exuberant and elaborate expressions of Victorian architecture anywhere in the country. After work was completed in 1876 Sir George modestly said his masterpiece was almost “too good for its purpose”. Not everyone agreed and after the First World War the hotel was already losing its popularity and in 1933 the Chairman of the London, Midland and Scottish Railway described the hotel as “completely obsolete and hopeless”.

Two years later the unfashionable hotel doors closed and the building became mere railway offices with much of the building just locked up. After the war British Rail tried to have the station and hotel demolished but in 1967 Gilbert Scott’s ‘monument of confection’ was awarded Grade 1 listed status.  It continued to be used as offices until the 1980s when it failed fire regulations and the building was closed down completely.  Ten years later and after £10 million was spent making it structurally sound the former hotel had a final fling with glamour. In 1996 it was proposed that the Spice Girls video for their first single ‘Wannabe’ was to be shot in a sunny glamorous Barcelona but due to budgetary constraints the disused and dowdy old hotel in front of St Pancras was used instead. The Virgin executives hated the video, “the girls were clearly freezing cold, which showed itself in various ways,” sniffed Virgin Records Executive Ashley Newton. The public disagreed and the video filmed in the cold and empty hotel in St Pancras helped to kickstart the global success of the Spice Girls.

Next to St Pancras Station stands the British Library. Designed by Colin St John and his wife MJ Long it was built from over 50 million bricks and thus occasionally nicknamed the ‘Brickish Library’. Completed in 1998 it became the largest British public building constructed in the 20th Century. At its centre is a six-storey glass tower containing the King’s Library [https://www.bl.uk/collection-guides/the-kings-library] – one of the most important collections of books, pamphlets, maps and manuscripts from the Age of Enlightenment. Although mostly accumulated by his father it was the George IV, who bequeathed this extraordinary collection to the nation.  As you can imagine for a monarch infamous for his feckless and profligate ways the offer was not altogether altruistic. By giving away his father’s library he saved himself £2000 a year for its upkeep.