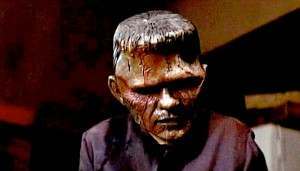 FOLLOWING the incredible box-office and critical success of John Carpenter’s Halloween (1978), the slasher film quickly became the go-to-format for up-and-coming horror filmmakers in the 1980s.  These films had titles like Happy Birthday to Me (1981) and My Bloody Valentine (1981), and most of them concerned bloody massacres on holidays.

Although critics denigrated these slasher films as “dead teenager movies” or “knife-kill” films and slammed their apparent sense of misogyny, and formulaic story lines, the slasher craze of the epoch actually produced a number of great and memorable horror films.

In the thick of things, however, critics weren’t necessarily able to distinguish the good slasher films from the bad ones, and so below is a list of five slasher films that, on retrospect, are much better and much more artistic than their reputations indicate: 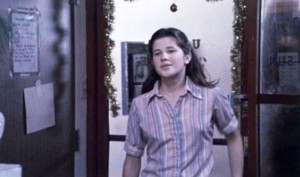 In this film from directors Jeffrey Obrow and Stephen Carpenter, five students (including one played by Daphne Zuniga) remain on their college campus over the Christmas holiday so as close-down and clean up an old dormitory building, Morgan Meadows Hall.

Alas, this assignment is hampered by the presence of a strange student, John Hemmit (Woody Roll), who may or may not be a psychotic killer.

Before long, the students are dropping like flies, and dying in gruesome fashion.   One student ends up in a deep fryer, for instance, and another is burned up in the building’s furnace.

Although all the familiar aspects of the slasher formula — from final girls to red herrings are present in The Dorm that Dripped Blood, the film nonetheless has some fiendish fun shuffling that familiar deck of cards.

For instance, the killer unexpectedly emerges from the victim pool, and his identity is a genuine surprise.  Similarly, the final sequence ends the film with a wholly unexpected and horrible death. The Dorm that Dripped Blood plays wickedly on such standards conventions — including audience assumptions about class — and emerges as genuinely unpredictable..

Like many slasher films of the period, The Dorm that Dripped Blood is colorfully-titled and incredibly violent in nature, but in sometimes shocking ways, the film manages to subvert the standard formula and thus seem fresh. 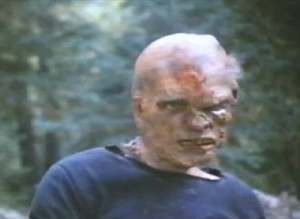 In The Prey, six young adults from the city, Nancy (Debbie Thureson), Joel (Steve Bond), Bobbie (Lori Lethin), Skip (Robert Wald), Gail (Gayle Gannes) and Greg (Philip Wenckus) hike into the thick woods at North Point, oblivious to the fact that a married couple was recently ax-murdered there while camping.

Before long, the young adults become the prey of a deformed gypsy (Carel Struycken). A heroic forest ranger (Jackson Bostwick) attempts to rescue the hikers, but his savage foe is unstoppable, and in search of a mate.

There’s a lot of stock footage of nature in The Prey (1984), on first glance an indication that the film is somehow padded to feature length.

And yet, in this case, the stock footage actually meaningfully serves the film’s man vs. nature theme.  After The Prey’s first, brutal ax murder, the audience gets long views of centipedes, frogs, spiders, and more wild-life. There are long shots of impressive mountain ranges, a spider’s web, and a majestic hawk overhead, searching for prey.

What remains admirable about The Prey is that it attempts, even if only via stock footage from some other production, to convey the idea of a real, living forest, an eco-system teeming with life forms other than man. The stock footage helps us to remember that we are not masters of nature, and that the campers have stepped into a realm of genuine danger.

And like The Dorm That Dripped Blood, The Prey also ends on an unbelievably horrible down note, as the film’s final girl suffers a fate worse than death in that living forest. This ending is either maddening or inspired, depending on your point of view, but it captures the film’s imaginative nature well. 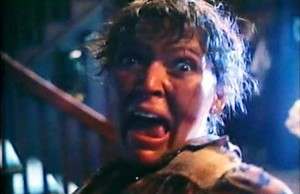 This mostly-forgotten slasher film from director William Asher features buff Jimmy McNichol as poor Billy, a boy raised by his abusive and bizarre Aunt Cheryl (Susan Tyrrell) following the death of his parents.

Night Warning opens in fine form as we witness those deaths in the family. Billy’s Dad is decapitated when his car’s brakes fail, and he slams into the back of the log truck.  We actually see the log break through the windshield and pile-drive over the driver’s head.  In the thirty or so years since I first saw the film, I have never forgotten the impact of this death scene.

After that egregiously violent but unforgettable moment, Night Warning settles into a creepy story of a mother figure, Cheryl, obsessed with her young ward, no holds barred, no boundaries observed. Cheryl kittenishly tells Billy she will be his “date,” and spends most of her time poisoning his milk, a symbol of corrupt motherhood.  And of course, when others — like Julia Duffy’s character, Julie — threaten Cheryl’s bond with Billy, she contemplates bloody murder.

Night Warning also features a bizarre subplot about Billy’s sexual identity. Bill Paxton plays Eddie, a classmate of Billy’s who tells him during basketball practice to keep his “queer” hands off of him.  At another juncture, a police detective similarly accuses Billy of being the (gay) coach’s “butt boy.”

Between Cheryl’s overbearing and inappropriate mothering and all the graphic references to his sexual identity, Night Warning appears to be a slasher film about one boy’s effort to define himself on his own terms, and not those established by family or society.  Night Warning is freaky as Hell, and consequently quite disturbing.

This horror film from the criminally under-appreciated Tobe Hooper has recently begun to get its critical due, but for many years after its release The Funhouse was routinely ignored and lumped in one with other “dead teenager” movies.

In a review for People Magazine in 1981, for instance, the critic observed that Hooper “ought to have moved on to better things…,” a comment that fails to address The Funhouse on its own artistic terms.

The Funhouse depicts the story of teenage Amy Harper (Elizabeth Berridge), a girl who decides to spend the night in the local amusement park with her three friends Buzz (Cooper Huckabee), Ritchie (Miles Chapin) and Liz (Largo Woodruff).  While trespassing in the funhouse, these teens witness the murder of a fortune teller, Madame Zena (Sylvia Miles) by the carnival barker’s (Kevin Conway) son, a creep in a Frankenstein mask (Wayne Doba).

This exceedingly-simple premise — a night of horror in a funhouse — escapes the slasher formula by quickly proving itself a meditation on double images, on the differences between horror that is real, and horror that is illusion.  From the earliest scenes, including Hooper’s homage to the shower scene from Hitchcock’s Psycho (1960), The Funhouse creates a clever duality between harmless images of horror entertainment and culture, and real human horror.

At the carnival, for instance, a magic show goes horribly wrong, but is revealed as a joke, an act created by an illusionist with fake blood, and props. Likewise, the funhouse itself is façade, a “family” amusement dedicated to harmless scares.

But soon the teens find themselves navigating the world underneath such safe imagery, and uncover true horror: family and sexual dysfunction.  The safe, age-old Frankenstein Monster mask comes off, and a new monstrous horror is revealed in its place.

Hooper’s point in the brilliantly-made film is that a scary “illusion”– like a carnival funhouse or Frankenstein Monster Mask — can actually be far “safer” to reckon with than a hidden, twisted widely-accepted reality despite societal hand-wringing about the horror genre.

The film’s final act blends The Funhouse’s two realities deftly, as the murdered teens literally become entangled with the funhouse ride and attractions. 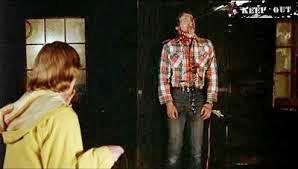 This is the film that launched a franchise (that continues as late as 2009), and cemented the slasher film’s hold on the box office in the early 1980s.

And yet, the original Friday the 13th is a grossly-underrated film.  Wes Craven’s Scream (1996) picked up on this fact, after a fashion, when an imperiled Casey Becker (Drew Barrymore) named Jason as the villain of the 1980 film.  The truth is that the image of iconic, hockey-mask wearing Jason Voorhees has largely dominated the public’s perception of this film…even though he isn’t the villain of the piece.

In the original Friday the 13th, penned by Victor Miller, a group of camp counselors, led by Steve Christy (Peter Brouwer), prepare for the grand re-opening of Camp Crystal Lake over the objections of locals like Crazy Ralph (Walt Gorney).  Ralph’s objections stem from an incident in 1957, when camp counselors neglected a young boy, Jason (Ari Lehman), who then drowned in the lake.  Soon afterwards, two counselors were murdered.

But Steve is committed, and with the help of lovely and intelligent, Alice (Adrienne King) prepares to re-open the camp.  Almost immediately, however, as an unknown assailant begins killing the camp’s new staff.  A full-blown massacre occurs during a powerful thunderstorm, and the murderer is revealed as someone who was very close to young Jason…

At its core, Friday the 13th’s theme is, simply, innocence lost.  But a child, Jason dies in the lake while swimming…neglected by those he trusted.  And his mother, Mrs. Voorhees (Betsy Palmer) loses her beloved son and her innocence too — along with her mind – after the fatal incident.  Innocence is even broached in terms of the counselors, as they countenance their first sexual experiences.

The beauty of the natural environs around “Camp Blood” nicely reinforce the film-long conceit of an innocent, Garden of Eden-type setting, but one that is now corrupted or ruined.  One scene in Friday the 13th involves a snake inside one of the cabins, a snake in the garden, literally.  The snake is immediately, decapitated by a counselor’s machete, putting an end to the threat and thus restoring order.

Symbolically speaking, that moment is determinedly repeated in the film’s bloody denouement as Alice chops off the head of another snake in the garden – the killer — also utilizing a machete.  The two images connect, because in each case is dramatized the idea of natural order overturned by the presence of evil (a serpent, specifically…), and then order restored.

Some of the Friday the 13th sequels are good, some are bad, and some are indifferent, but the original is a well-made film that explores its theme well in visual terms.  The sequels (especially the bad ones…) have cast a kind of retroactive pall over the first film in the franchise — one that prevents critical appreciation of it — and that’s a shame.