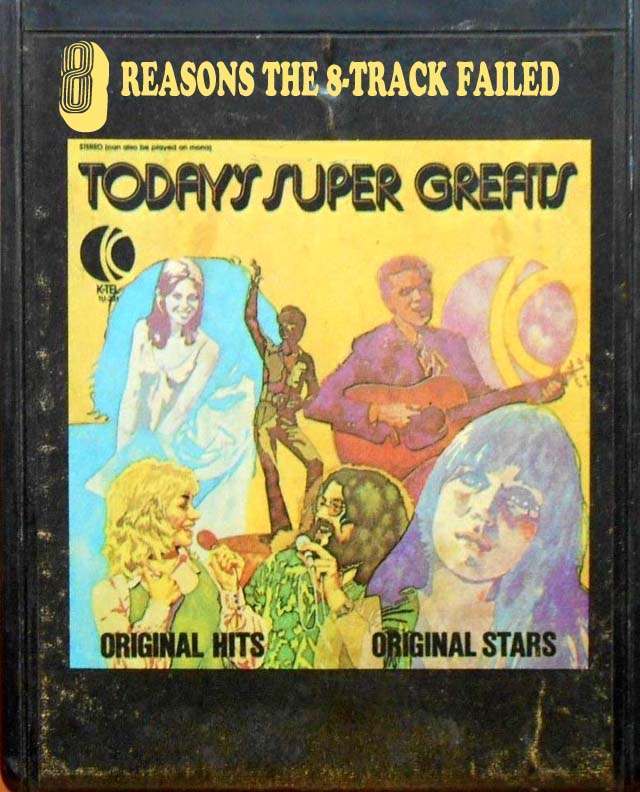 WHEN eight-track tapes hit the shelves in the latter part of the Sixties, it was seen as a godsend.  All of a sudden, you could listen to your music collection in your car, or out-and-about with the new boom-boxes.  There were even rumors it would completely replace the vinyl record.  Yet, just over a decade later, the humble cassette tape was able to drive it to extinction.  Its heyday lasted from 1968-1975, and by 1980 the poor eight-track was in history’s dustbin, a sort-of laughable derelict from the Seventies.

So what happened? Here are 8 reasons for its untimely demise. 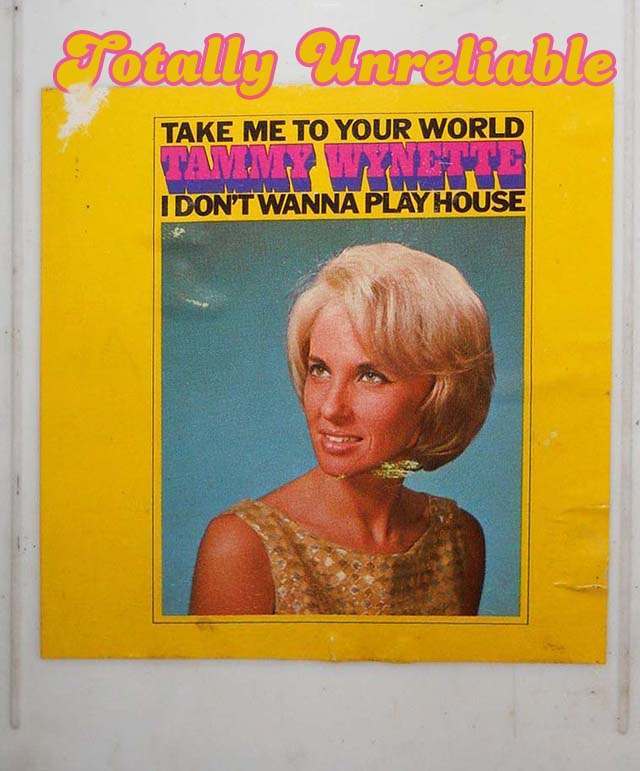 The primary reason the eight-track became extinct was because it was an unreliable piece of shit.  They simply weren’t built to last and subsequently earned a reputation as being ticking time bombs.  Truth be told, brand new eight-tracks often sounded good, and the tapes themselves were virtually indestructible: they never melted in the sun or cracked.  It was the internal components that started to fall to pieces over time.  If the manufacturers hadn’t opted for cheap construction, things might have turned out differently. 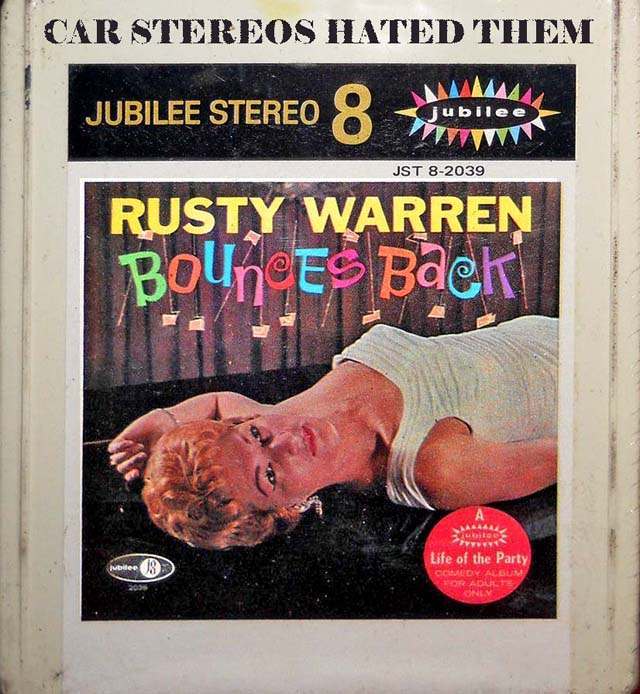 Anyone who had an eight-track player in their car knows the trauma of having the tape eaten.  Owing to its problematic construction, the eight-track became notorious for becoming a tangled wretched mess…. usually during the best part of your favorite song.

3. THE ANNOYING SONG FADE OUT 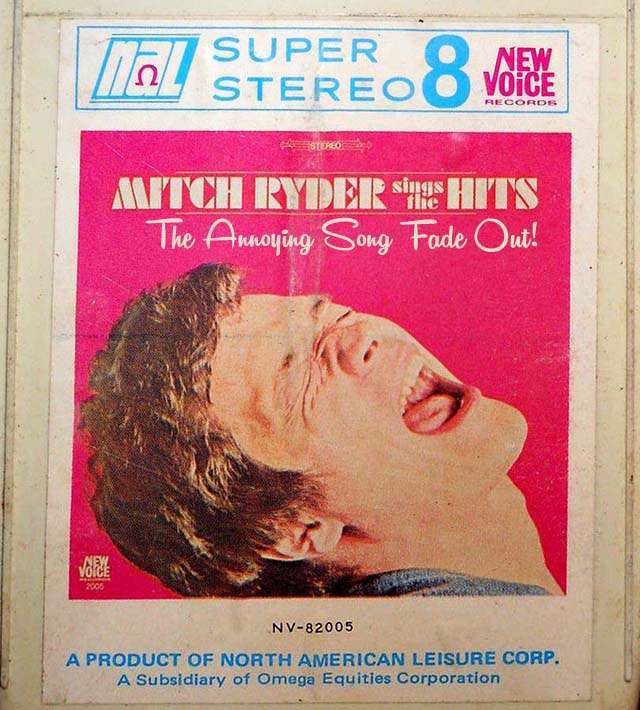 It was quite common for a single song on an album to fade out and fade back in as it transitioned to a new track.  Eight-track tapes consisted of actually 4 tracks (each in stereo, totaling 8).  Unfortunately, this meant that they had to be equal in length, which didn’t necessarily jive with the original LP.  Suffice it to say, things had to be adjusted and some songs had to be split into two parts – thus the annoying song fade out and in. 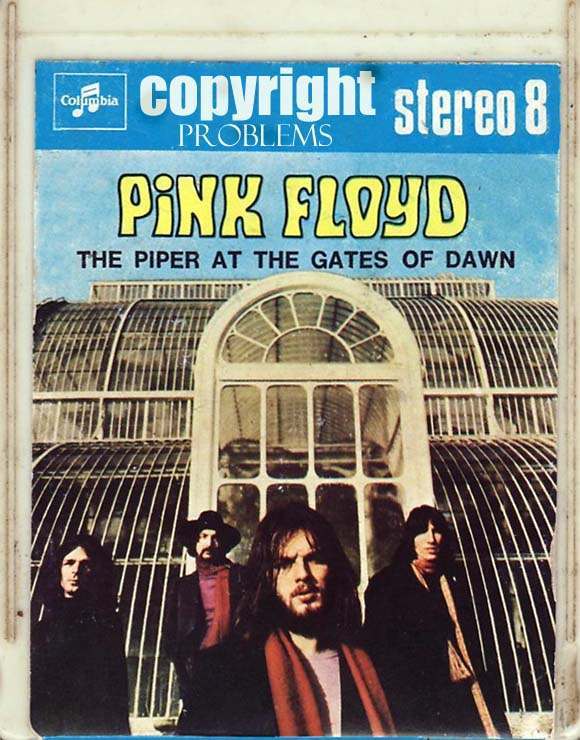 Eight-tracks were the first music medium to introduce the issue of copyright protection.  The fact that you could easily record on them brought floods of illegal copies to truck stops and flea markets across the US.  There’s a famous story of Jerry Lee Lewis taking a baseball bat to a shelf of bootleg eight-tracks he came across when he stopped for gas.  However, the issue never became widespread enough to affect the way the music industry did business; it wasn’t until the mp3 format took hold that the foundations began to shake 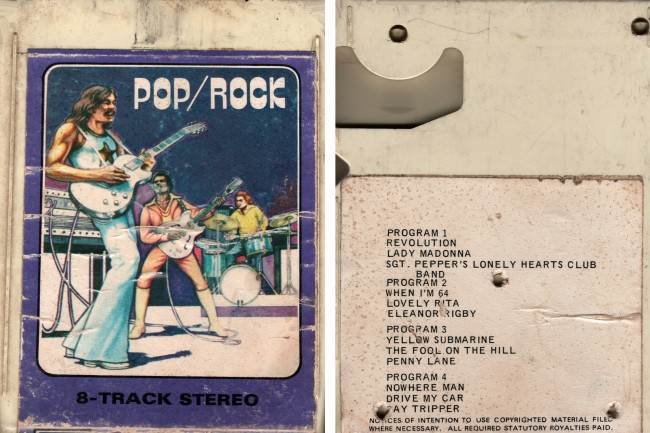 Funny.  I don’t remember this Beatles album. An 8-track bootleg.

But did the growing abundance of homemade eight-tracks really have anything to do with its downfall? After all, the cassette tape was geared toward making unlicensed recordings.  Perhaps it wasn’t directly responsible, but the ability to easily make backyard bootlegs didn’t do the eight-track any favors in the reputation department.  The music industry would learn to live with a degree of illegal copies on the market, but the eight-track absorbed the initial scorn. 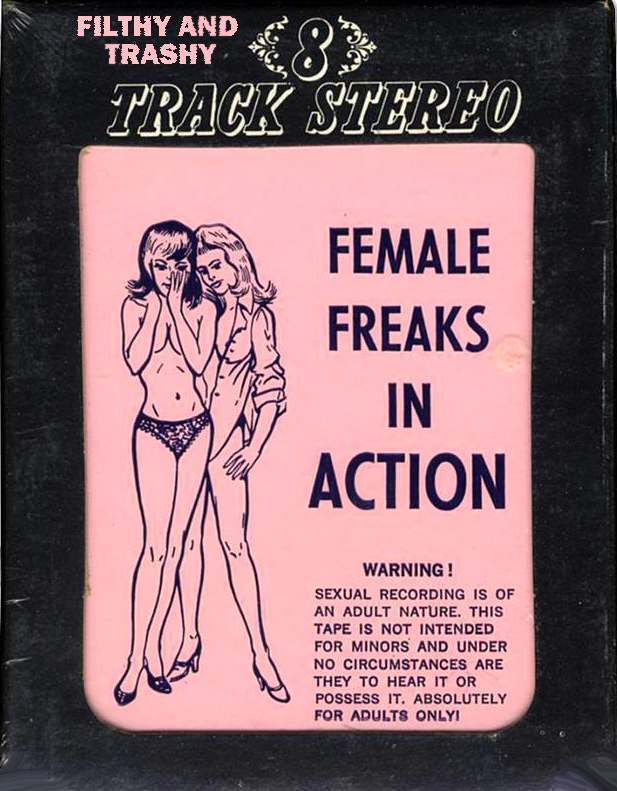 Despite the fact that eight-tracks began as techno-marvels, developed by Bill Lear (of Lear Jets no less), they soon earned a reputation as being not only unreliable, but also tacky.  As I mentioned, the case was basically bulletproof, but the sticker was not.  Thus, everyone’s collection consisted of sturdy cartridges with worn, peeling and stained stickers.  There was no real outer decorative case as with CDs and cassettes, just the cartridge.  And so, unlike the source of pride which was your record collection, the filthy eight-track collection often became a thing of shame in the floorboard of your car. 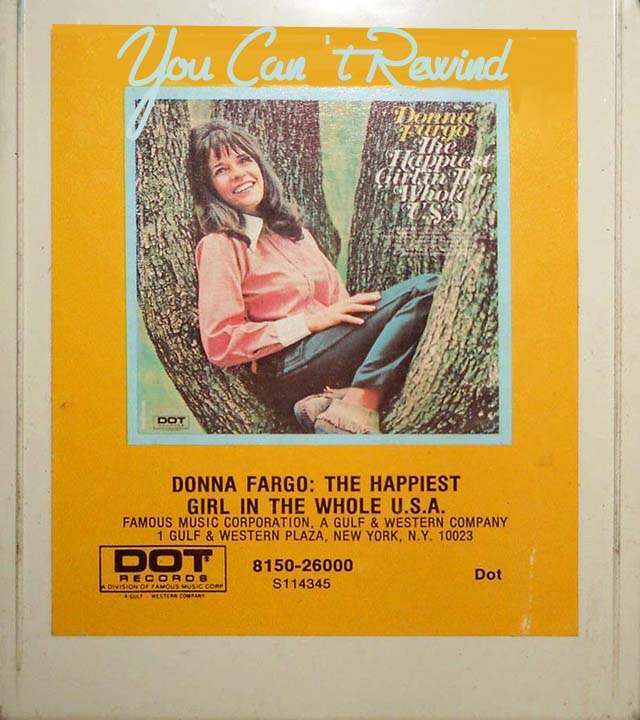 It may seem trivial, but not being able to rewind become a real downside to the eight-track.  It was a breath of fresh air to be able to roll backwards with the cassette tape. This negative wasn’t quite outweighed by a strong positive quality of the eight-track: it was on an infinite loop. While the cassette and record would abruptly stop when it reached the end of a side, the eight-track would play for all eternity…. or at least a few hours before it busted. 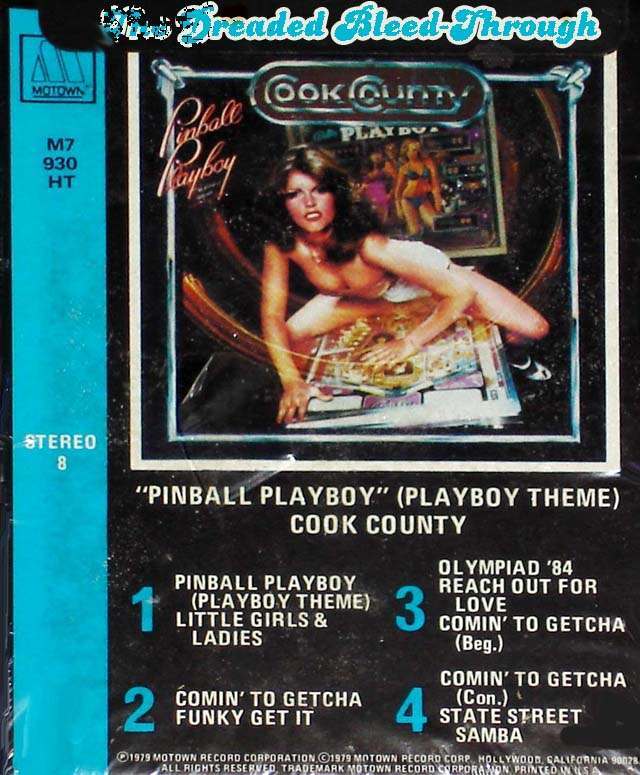 I won’t go into the mechanics of the eight-track (there’s always Wikipedia for that).  I’ll just point out that, if the heads became misaligned even slightly (a VERY common occurrence) the one track would bleed-through into another track.  Worst case scenario: two songs at equal pitch playing at the same time.  Best case: a faint background of an altogether different track.  Either way, it was a thoroughly miserable listening experience. 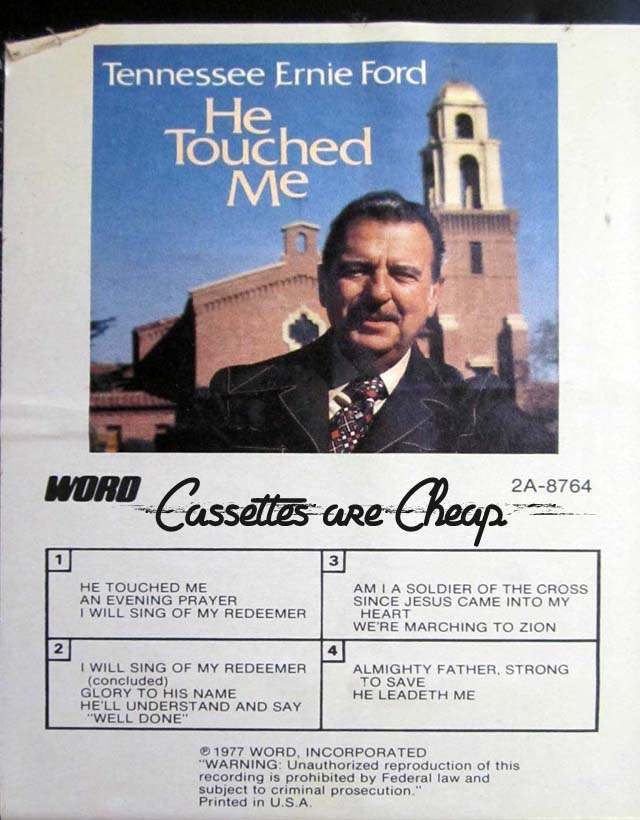 Ultimately isn’t this what it all boils down to?  If the eight-track had been a pinch more reliable and worked out its kinks, perhaps the lower price wouldn’t have been such a death blow.  In other words, the cassette wasn’t exactly a revelation the way CDs and mp3s seemed to be at first; so, there was no reason to think a slightly lower price would matter so much.  But since the eight-track was under-delivering, all it took was a competing product being just a couple dollars cheaper. 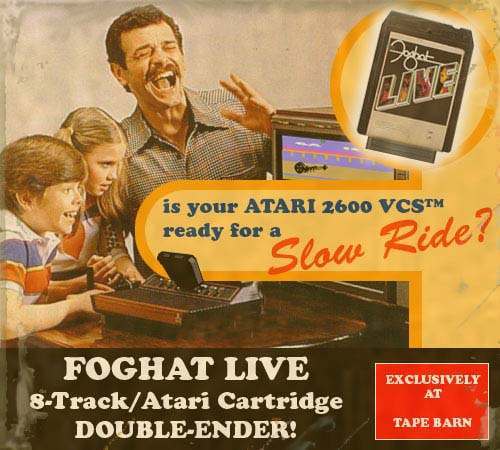 File under 8-tracks we’d love to have seen.  Perhaps an Atari-8-track combo would’ve given it just enough cool points to stay around a few years longer.

But let’s not be too hard on the eight-track.  For a few years, it was awesome and we loved it.  Like all technologies, it got supplanted by something else.  Indeed, the cassette’s reign of glory was short lived as well; barely making it out of the eighties before the CD beat it into submission.  Then the CD became overshadowed by iTunes and mp3s…. and so it goes.

As for myself – I’ve stuck with records and am quite happy.