In the 1970s, the horror film underwent a dramatic transition in terms of monsters.  Hammer Studios’ Dracula and Frankenstein series were ending their long reign on the silver screen and a new breed of monster — slashers like Michael Myers and Jason Voorhees — waited in the wings for the next evolution of the format.

In this time of shifting fears and shifting expectations, new monsters rose to fill the void at the cinema, and some were very effectively-crafted. This was the era, after all, that first presented audiences with terrors like the demonically-possessed Linda Blair in The Exorcist (1973) and Leatherface in The Texas Chainsaw Massacre (1974).

Yet for every big screen monster that proved absolutely terrifying, there was another that, oppositely, proved…absolutely dreadful.

Inspiring fear in absolutely no one, are these: the five worst horror movie monsters of the 1970s. 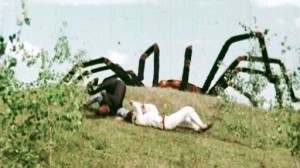 When a black hole opens in rural Wisconsin, a giant spider deposits its eggs across the countryside, leaving Sheriff Alan Hale (Gilligan’s Island) to protect the redneck denizens.

The giant spider of the title is actually a very furry Volkswagen beetle, as is immediately apparent from a cursory inspection. This arachnid-automobile hybrid is seen in long shots, gliding across the countryside, and its arms are mostly frozen in place. 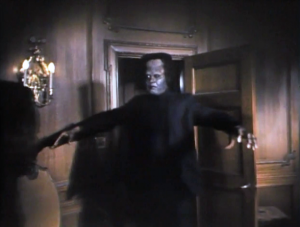 Blaxploitation monster Blacula (William Marshall) had a tremendous sense of dignity and nobility, and William Girdler’s Abby(1974), played by Carol Speed,  held her own too.   But the Blaxploitation answer to Frankenstein, Blackenstein, proved a disaster.  In this case a scientist, Dr. Stein (John Hart) cracks the “DNA code” and turns Vietnam veteran and amputee Eddie Turner (Joe De Sue) into a mindless monster.

The only problem is that the monster is not fearsome at all, just the old Frankenstein Monster of Boris Karloff from the early 1930s…redesigned with an afro.  Even more disappointingly, the Blackenstein Monster shows no remorse or humanity, the way his predecessor did, and merely kills without mercy, all while looking slightly dazed and confused. 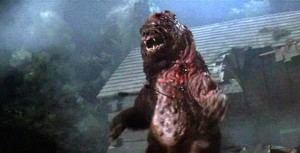 In 1979, Prophecy and Alien were pitted against each other in the sweepstakes for “ultimate” movie monster.

Prophecy failed the scare test by featuring a monster on screen that would scare absolutely nobody, a kind of shambling, rubbery mutant bear.  Even the kill sequences — especially one with a sleeping bag and a young camper — are funny instead of scary. 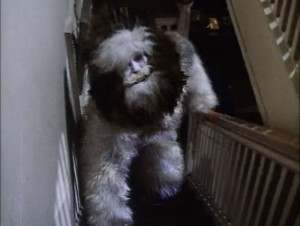 What is the secret of the Yeti on Boot Island?  You’ll have to watch Shriek of the Mutilated (1974) to learn the shocking truth, and to see a terrible abominable snowman monster costume that would scare not the even the most suggestible of viewers.

Here, the monster looks like a bunny with shorn ears and buck teeth.  Realizing that their monster would fool nobody (least of all the characters in the drama…), the filmmakers often turn the film image “negative” when the yeti is on-screen, hoping to make it seem more terrifying.

Also limiting the fear factor significantly is the fact that the monster is described in dialogue as possessing a “rank, foul odor” and a “fetid aroma.”

Now go watch the movie, learn the plot twist, and ask yourself this very important question: if the monster is just a man in a costume, what exactly was that smell, anyway? 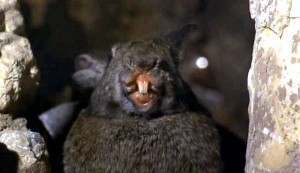 Two irresponsible scientists played by Janet Leigh and Stuart Whitman experiment on a bunny in Arizona, and then, through parental neglect, let their daughter release it into the wild.

A hop, skip and a jump later, colossal, a herd of carnivorous rabbits is leaping towards Ajo, leaving a path of destruction in its wake.

In Night of the Lepus, these giant rabbits are portrayed by life-sized rabbits jumping around, in slow-motion, on miniature sets.

Although the movie features the great line “a herd of killer rabbit is headed this way,” most of the film is so dull it’s not even funny.  And after a while, you start to recognize the same three or four rabbits in the attack sequences as they jump over chasms, or hop their way to screen infamy.  Look, there’s Fluffy!