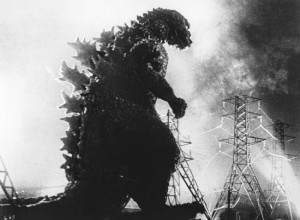 SINCE  his first silver screen appearance in 1954, Toho’s giant monster Godzilla has starred in more than two dozen epic movies.

The big green lizard has been featured as a terrifying villain, as a defender of the Earth, and, occasionally, even traveled to American shores to wreak havoc.  In this span, Godzilla has stood alone, acted as a tag team player (with friends like Anguirus and Rodan…), battled ancient threats to humanity, and even fended off alien invaders on more than one occasion (Monster Zero [1965], Final Wars [2004]).

With the release of Gareth Edwards’ Godzilla in theaters (2014) now imminent, it’s the perfect time to remember Godzilla’s most memorable and successful historical efforts. 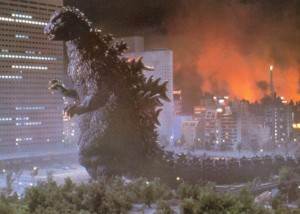 This underrated entry in the saga kicked off the new and second span of Godzilla films, known as the Heisei Era.

After some of the more child-oriented fare of the 1970s, Godzilla: 1985 successfully restores Godzilla to his former, menacing self.  A direct sequel to the original,  scorching 1954 effort, this film also highlights the most overt political commentary since the anti-nuclear message of Ishiro Honda’s masterpiece.

Here, a beleaguered Japanese Prime Minister (Keiju Kobayashi) is caught between competing American and Soviet interests during the heightening of the Cold War in Ronald Reagan’s Presidency. With pressure bearing down on him from all sides, the Prime Minister draws a red line: no nukes in Japan, no matter the cost.

Beyond the political commentary on East-West Tensions and a well-staged scene depicting Godzilla’s landfall in Tokyo during blackest night, Godzilla: 1985 also finds a way of contextualizing the creature’s existence and nature.

Godzilla, in the Americanized version, is described (by Raymond Burr’s reporter, Steve Martin) as a tragic and innocent creature, and likened directly to a volcano or other natural disaster.  The monster is, finally then, a force of nature, and man must respect him as such if he hopes to contend with him.

At once a sequel and a re-boot of the saga, Godzilla: 1985 re-establishes — thirty years later — all the things that made Godzilla so special in the first place. 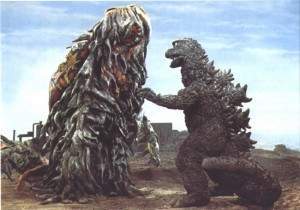 Known in America as Godzilla vs. The Smog Monster, Godzilla vs. Hedorah is another entry in the franchise that has proven controversial with long-time fans.

Here, Godzilla combats an avatar for man’s despoiling of the Earth’s environment: a horrid alien creature that feeds on garbage, and literally sits on smoke-stacks to suck up pollution fumes. Hedorah can fly too, and spray Sulfuric Acid on crowds of fleeing, terrified humans.

Throughout its running time, Godzilla vs. Hedorah features several impressionistic artistic renderings of the new monster, drawn and colored by imaginative children, and Godzilla is summoned to helpful action by a child who can’t understand why man himself can’t do anything to stop the scourge of pollution.

In the end, Godzilla proves victorious in battle, pretty much as we expect, but the giant monster shakes his head in disapproval at mankind for ruining our home and his.

If the original Godzilla was the ultimate anti-nuke polemic, Godzilla vs. Hedorah replaces that bugaboo with the fear of environmental damage and pollution, the same fears expressed in 1970s science fiction efforts such as No Blade of Grass (1970), Frogs (1972) and ZPG (Zero Population Growth) (1972).  In this case, however, Godzilla is the savior, not the symptom of man’s mismanagement of nature.

Godzilla vs. Hedorah also features an unforgettable James Bond-like theme song, “Save the Earth” and features an extremely weird scene of Godzilla propelling himself into the air — and actually flying — by utilizing his atomic breath as a jet engine.

This is the entry that saw Godzilla go from being unrepentant city-destroyer to reluctant hero, and an early effort depicting more than two monsters battling each other at one time. Godzilla’s legendary enemy, the three-headed golden dragon, King Ghidorah (or Ghidrah) is also introduced.  He would become a mainstay of the series, re-appearing in films including Monster Zero (1965), Godzilla vs. King Ghidorah (1991), and Godzilla: Final Wars (2004).

Beyond these significant aspects, Ghidrah: The Three-Headed Monster features an incredibly imaginative climactic sequence in which a Mothra grub — on behalf of the humans — attempts to convince rivals Godzilla and Rodan to team-up and help the over-sized insect fight Ghidorah…for the well-being of the planet.

During the conversation, Godzilla reveals a hatred of humanity, and apparently expresses himself using some not-very-nice words.

Godzilla petulantly refuses to help, until he witnesses the nasty Ghidorah batting the Mothra grub around like a rag doll, and realizes that the alien dragon should pick on someone his own size.

Ultimately, the film explores the concept of cooperation in service of a common good, and once more, Cold War politics seem the explicit inspiration. Mothra represents the level-headed Japan while competitors Godzilla and Rodan could be the Superpowers of East and West.  Only when all three “monsters” unite can the real evil be defeated.  In a time not long after the Cuban Missile Crisis, this was a message worthy of wide broadcast.

It is true that Ghidrah: Three-Headed Monster (as well as Godzilla vs. Hedorah) seem a far cry from the searing, raw power of the original black-and-white Godzilla.  The focus and tone are entirely different, and yet equally worthy points are vetted by the filmmakers.  The final smack-down of Ghidorah by Godzilla, Rodan and Mothra is glorious too.  If ever a giant monster movie carried through on a “can’t-we-all-get-along” vibe, Ghidrah: The Three-Headed Monster is it. 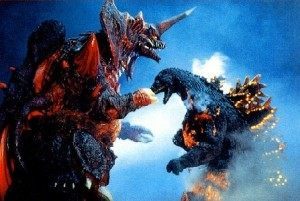 If you love Godzilla as a hero, or perhaps even as an anti-hero, Godzilla vs. Destoroyah is heart-wrenching, the Wrath of Khan of the Godzilla franchise.

To wit, Godzilla fights a horribly demonic life-form here, a child of the weapon that destroyed the first Godzilla in the 1950s original: Destoroyah.

But more significantly, Godzilla spends the entire film battling a far more frightening enemy: his own mortality.  Specifically, Godzilla’s heart is failing.  Apparently, his heart operates much like a nuclear reactor, and is threatening to melt-down.

When Godzilla goes boom, alas, he’ll take the whole world with him in a blast that will shear the atmosphere from the Earth.  Although the human stars of the film search for a way to prevent the destruction of the Earth, one truth is nonetheless obvious: Godzilla has had it.

No matter what, he’s going to die.

Ultimately, then, Godzilla must choose the manner and time of his death. When his son, Little Godzilla (also seen in Godzilla vs. SpaceGodzilla), enters the fight against the fearsome Destoroyah, Godzilla must make a choice about himself, one that suggests a very human-like love for…family.

Godzilla vs. Destoroyah is a good film for understanding those things that Godzilla and the human race have in common, but also because it doesn’t back down from its (sad) premise.  There is no reprieve for this Godzilla, no last minute way out, and that fact which makes it feel, in a way, more permanent and sad than even the aforementioned Star Trek II.

Still, the film ends on a remarkable high note, and an unforgettable visual composition. Tokyo endures a nuclear winter following the final smack-down and death of Godzilla, but in waves of thick mist, the camera seeks out a familiar silhouette.  A figure rears up and a roar is heard on the soundtrack.  The Godzilla lineage continues… 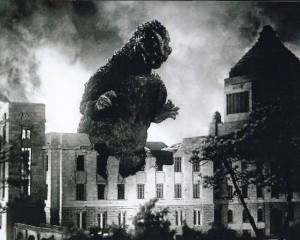 There are many strong films in the Godzilla canon, but none walk so tall, or qualify so deeply as a cinematic masterpiece as does Ishiro Honda’s 1954 original.

Released less-than a decade after World War II, the film is veritably obsessed — haunted — by the ghosts of Hiroshima and Nagasaki. The film depicts a city in ruins, and a people devastated by a night of unquenchable fire.

There have been many truly great monster films over the years, but few have focused so intently on the victims of a massive-scaled attack. Here we see the civil authority’s inability to cope with the disaster, and watch the overflow of the wounded carried away on stretchers.  And during Godzilla’s attack, one mother implicitly references the real-life dropping of the atom bombs with her daughter, noting that they will soon join the girl’s father (who apparently died in that event).

Godzilla is so memorable not only because of the serious intent and the metaphor equating Godzilla to nuclear war, but because of Honda’s brilliant, economical execution of the story and that theme.  The film moves from meeting to meeting, essentially, of scientists and politicians, as the problem of Godzilla is examined from multiple angles.

These scenes don’t play like moments in a fantasy film, but as the “captured,” spontaneous moments of a real-life documentary.  Accordingly, the film’s sense of reality is stellar, despite the presence of a giant lizard.

Dr. Serizawa’s story is also a worthwhile one. He is the scientist who has created the Oxygen Destroyer, the only weapon that can destroy Godzilla.  But Serizawa doesn’t want to use the device because he believes it could spawn a new international arms race.  Call it “The Oppenheimer Syndrome.”

Finally, Serizawa acquiesces to the weapon’s use, but decides that his research must be destroyed and that he must die with his terrible invention, his terrible “child.”

Thus Godzilla views the antidote to nuclear war as individual human responsibility. This is a terrific and valuable message, especially arriving at the dawn of the “push button” age. 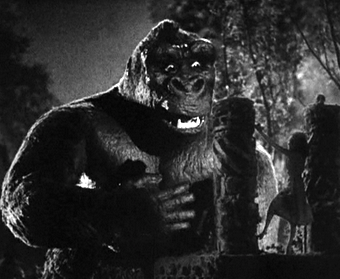