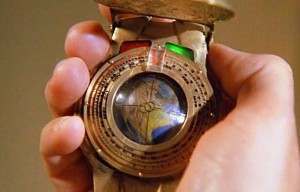 Although Star Trek: The Next Generation premiered in 1987 and brought space adventuring back to TV, the majority of the decade saw alien tools and gadgets, not man-made ones, taking center stage.

As before, I have labored not to include guns on the list, as guns serve quite a different purpose than gadgets do. 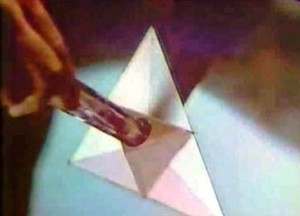 In this short-lived series from Roderick Taylor, The Sterlings (Sam Groom, Gretchen Corbett, Tony O’Dell, Jonna Lee and Chris Hebert) crossed dimensions from Earth to the “otherworld” of the title. In the first episode of the series, “Rules of Attraction,” the Sterlings ended up in a Forbidden Zone near the province of Sarlex.

There, they overpowered Zone Commander Nuveen Kroll (Jonathan Banks) and after an altercation stole his access crystal. This cylindrical device, a key of sorts, provided unlimited access to travel between the provinces, and could access information, data banks, and even entertainment.

Kroll was desperate to get his stolen key back, yet possession of the access crystal often made the difference between life and death for the Sterlings. 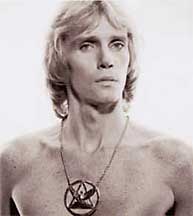 Bennu of the Golden Light (Judson Scott) an ancient astronaut awakened in 20th century Earth in The Phoenix. He was able to stay one step ahead of his pursuer, Preminger (Richard Lynch) in part because of a gadget: a golden necklace amulet with the image of a phoenix molded on it.

This solar-powered amulet, a token from Bennu’s distant world of Eldebran, could enhance its owners mental powers, which included clairvoyance, telepathy, astral projection, precognition, and apparently (though not seen in the series), the creation of hallucinations. 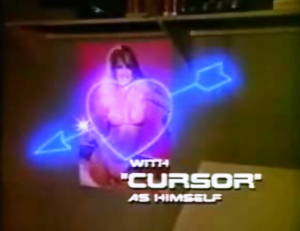 Cursor was the hologram creator and sidekick with a dirty mind on Glen Larson’s superhero TV series, Automan.

Cursor was an apparently sentient, flying snowflake that could, at a moment’s notice, create the Auto-Helicopter, the Auto-Motorcycle, or the Auto-Car. Cursor was a handy sidekick to have around for Automan (Chuck Wagner) since he could rezz-up just about anything that any situation required. Just imagine, never having t park a car, instead ordering your personal assistant, Cursor, to rezz one up from storage. 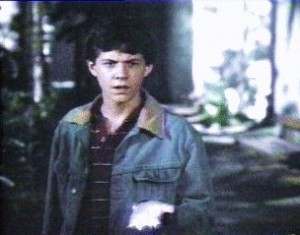 This TV series is set fifteen years after the John Carpenter film of 1984 (making it the year 1999?). The alien originally played by Jeff Bridges returns to Earth, and adopts a new form, that of a dead photo-journalist, Paul Forrester (Robert Hayes). He finds his son, Scott Hayden (Christopher Daniel Barnes) and goes in search of the boy’s missing wife, Jenny (Erin Gray).

Helping them on this quest were small, glowing alien spheres (I don’t dare call them balls). These spheres, just four or five centimeters in diameter, could be used by a disciplined mind to carry out the instructions of the mind, fostering E.S.P. and psychokinesis. These alien devices look like marbles, glow in the dark, and like Bennu’s amulet, enhance the powers of the mind.

Scott learns to control these orbs or spheres in the episode titled “Blue Lights.” 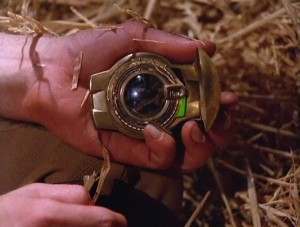 This NBC-TV series created by James D. Parriott involved a mysterious “voyager” — possibly an alien –Phineas Bogg (Jon Erik-Hexum) who, with the help of a twentieth century boy, Jeffrey Jones (Meeno Peluce) traveled the corridors of time, making certain that history would unfold as intended.

The time travel device of the series is the Omni, a golden watch which resembles a stop-watch.  On the face of an Omni is a dome-like map of the Earth, and above it are two indicators.  The green indicator suggests that the time-line is correct (or corrected).  The red light indicates that something is very, very wrong, and requires repair.

One episode of the series, “The Trial of Phineas Bogg” (January 16, 1983), sees the Omni stop functioning as Bogg is accused of having violated the Voyager code.  In the course of the story, we learn that Bogg’s Omni Memory Recorder has been tampered with in an attempt to frame him.

Wouldn’t you like to have a watch like this one? One that tells you when something is wrong with the universe?