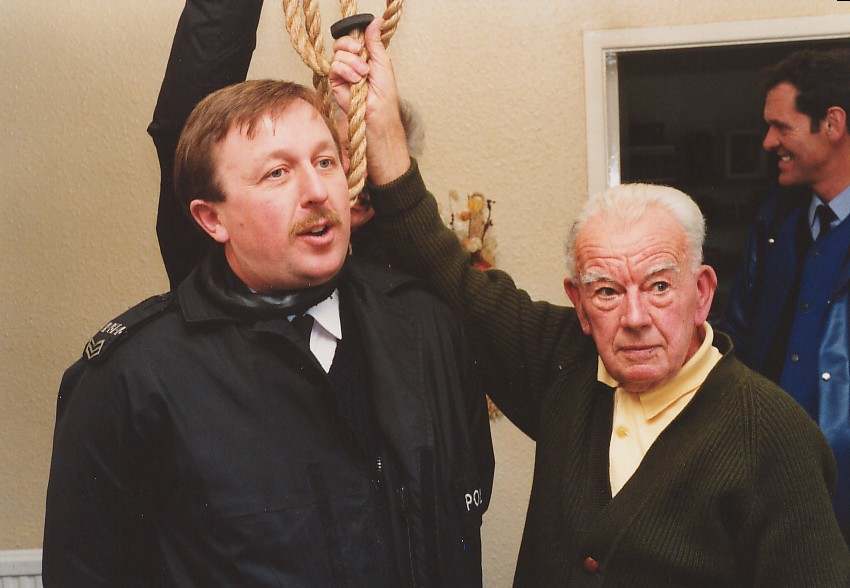 Nobody finds it odd that footballers and rock stars line their walls with framed shirts and gold discs. But what if your claim to fame is slightly more unusual? What if you were Britain’s last surviving executioner? What, to paraphrase Richard Hamilton, makes hangman’s homes so different, so appealing? The answer is obvious: a fully operational gallows in the basement. And three more in the bedroom.

Sydney Dernley was a colliery welder who was appointed assistant executioner by the Home Office in 1949, and participated in 20 hangings. Notable among these was the notorious execution of Timothy Evans for murder. Evans was later pardoned when evidence of the activities of mass-murderer John Christie were discovered at the same address.

‘There were only two things I remember about that execution,’ he reflected later. ‘One is that while I was going on the train into London I saw in Leicestershire the Quorn hunt – a magnificent sight, and then when we went into the condemned cell in Pentonville to strap Timothy John Evans’ arms, he turned and looked at us and I’ve never seen such terrified eyes in all my life.’

His reaction: ‘Well, if I helped to kill an innocent man… it doesn’t worry me one little bit. I did the job I was trained to do, and I did it well.’

Very well indeed. On May 8, 1951, he and Albert Pierrepoint set a new record of seven seconds, cell to the gallows.

But on 27 April 1954, Dernley was struck off the Home Office list of Official List of Assistant Executioners. This was probably not unconnected with that fact that he had just been jailed for six months for publishing obscene material, although Syd always believed it to be the consequence of a crude comment he had made about the body of a hanged man.

His criminal offence was to run a smutty postal library of books and pictures, under cover of a cryptic newspaper advertisement offering an antique whip in return for an old-fashioned hanging rope. The Times reported that his defence rested on the fact that his borrowers were ‘people of standing’: ‘company directors, a schoolmaster, an incorporated accountant, and others who would be ashamed for their identity to be disclosed’. Delany himself happily admitted (though not at the trial) that he took ‘obscene’ material to occupy himself on the night before the execution of Norman Goldthorpe at Norwich.

When his hanging career ended, his celebrity career began, with a book and numerous media interviews. During one such interview with a Spanish magazine he recreated a hanging, using the interpreter as the condemned man. It was so realistic that the victim ‘nearly messed himself’.

When not performing his duties as treasurer of the local Conservative Association, Syd amassed a treasure trove of hanging paraphernalia, including hood, legstrap and armstrap, and a replica noose to replace the genuine noose that he had to sell.

In the bedroom he had three working model gallows complete with victims, and a guillotine with a headless body. As if that wasn’t enough, it also housed a spyhole from a condemned cell, and a wooden board on which the notices of executions were displayed.

For a while he ran a post office in Mansfield, and in the basement he reconstructed a genuine prison gallows, from which hung a tailor’s dummy. Visitors sometimes asked to try it out for themselves, complete with hood. Others – such as an unsuspecting man who had come to read the electricity meter – did not.

Why did he want to become a hangman? ‘It was not that I wanted to kill people,’ he said later. ‘It was the story of travel and adventure, of seeing notorious criminals and meeting famous detectives.’

Unlike other hangmen who later changed their minds about capital punishment, Syd remained a fervent supporter to his dying day. He appears to have thoroughly enjoyed his ‘work’ and his only regret seemed to be that he had been denied the chance to hang plenty more. That and the fact that he never got the chance to chop heads off French style: ‘That would have been an experience!’