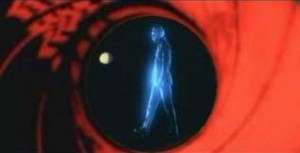 The Friday the 13th film series possesses its ups and downs, high-points and low-lights, and yet virtually every entry in the franchise features shocking and often grotesque death scenes.

Unlike the death scenes in the Nightmare on Elm Street series, by comparison, the violence in the Friday the 13th movies tends not to be deeply psychological in nature.  Freddy Krueger kills by finding his victim’s personal foibles in their dreams and then ruthlessly exploiting them. Jason kills by brute force, or very sharp machete. He doesn’t play games.

Many films in the Friday the 13th film series follow the same outline:  A group of teenagers head out for a weekend at Camp Crystal Lake, or thereabouts, and are promptly stalked by a killer (either Jason Voorhees, his mother, or a Jason imposter, depending on the entry…).

A storm rolls in, cuts the power, and it’s time for the killer to go to work on the misbehaving teens, punishing those who engage in premarital sex and smoke weed. The message: if you fuck, you’re out of luck.  If you play, you pay. 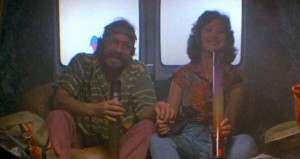 Yet even within this repetitive (and eventually highly-predictable) framework, the Friday the 13th films manage a high-degree of ingenuity in terms of the actual death scenes, often highlighting gruesome, cutting-edge special effects in the process.

Here my selections for the five best or most memorable death scenes in the franchise.

Here, Jason breaks into a tent, grabs an unlucky camper in her sleeping bag, and bashes her to death against a tree like she’s a sack of potatoes.

This is such a direct, blunt murder that it lingers in the memory. Freddy may like to tease his victims, and Michael Myers may watch them for a while before striking, but in moments like this, Jason cuts right to the chase.

Tom McLoughlin’s sequel is among the best films in the canon, and recognizes how funny some key aspects of the Jason saga really are.

The film opens with a Jason-ized version of the trademark James Bond gun barrel opening, for instance, and then has fun with some wicked visual jokes. For example, an imperiled child at a Crystal Lake cabin is seen to be reading Sartre’s No Exit, at one point.

At another juncture, a character breaks the fourth wall and tells the audience that some folks have a strange idea of entertainment, a gag which reveals the film’s sense of humor about itself, and about the franchise.

One death that stands out in Jason Lives involves three obnoxious paint-ball players. These “weekend warriors” are dressed in fatigues and goggles, and running around the forest.  Jason appears in front of them all of the sudden and decapitates the three of them in one slice. The triple murder is quick, efficient and brutal, much like the sleeping bag death noted above.  The editing is great too, for the surprise it registers on the victims’ faces.

Jason is a scary figure because you can’t reason or engage with him. He sees you, and you see him…and you’re dead.

Although today the film — and indeed, many of its effects look particularly dated — I’ve never forgotten this particular kill.  Jason grabs unlucky Rick (Paul Kratka) from behind, and then quickly crushes his skull.

Jason applies so much pressure so rapidly that Rick’s eyeball pops out, right at the camera.

Today, you can clearly see the wire on which the eyeball flies, but it almost doesn’t matter, because the moment is still over-the-top gross and deeply unsettling. Like the other, previous deaths featured on this list, Rick’s horrible death suggests Jason’s powerful, unrelenting strength. He is literally like a force of nature, appearing, killing, and moving on.

What goes around comes around, right? The first three deaths featured on this list are of Jason’s victims.  The final two, by contrast, showcase the villains getting their comeuppance.

Here, Jason is unmasked, thanks to Corey Feldman’s Tommy Jarvis, and his sister, Trish (Kimberly Beck), and then struck in the face with his own machete. This murder sequences reaches for Grand Guignol glory when Jason falls on his knife, and his head slides down the machete blade.

This death proves a strong contrast to Jason’s manner of killing. In the sleeping bag death, in the triple decapitation, and in the eyeball-launch, Voorhees strikes quickly and mercilessly, and at least we can say the victims die quickly. Here, Jason undergoes a long, agonizing death before Tommy takes matters into his own hands with a decapitation.

The attack comes in slow-motion, and we get a long look at Mrs. Voorhee’s headless neck.

But the death scene remains so effective because it is a deliberate mirror or reference to another event in the film.  Early on, the teenagers at Camp Blood find a snake inside the cabin. One of them takes a machete to the serpent, killing it and thus restoring the pastoral paradise.  Mrs. Voorhees is clearly a “serpent” too, and Alice re-sets order by removing her in much the same way the snake was removed.