When the police department of the once-prosperous small town of New Castle, Pennsylvania, threw out thousands of mid-century mug shots in the late 1990s, a few hundred were saved from destruction by one police officer. The pictures ended up scattered across the world after he sold them on eBay. Five years ago, Edinburgh-based writer Diarmid Mogg came across a few of the photographs in an antique store in Scotland.
Since then, he has devoted himself to collecting as many of the mug shots as possible. He has used the digitised archive of the local newspaper, the New Castle News, to research the criminals’ lives, and has posted their stories on his website, Small Town Noir.
Mogg said: “These pictures are a precious record of people who would otherwise have been forgotten, and their stories give us a glimpse of a fascinating alternative history of America’s ‘greatest generation’.” 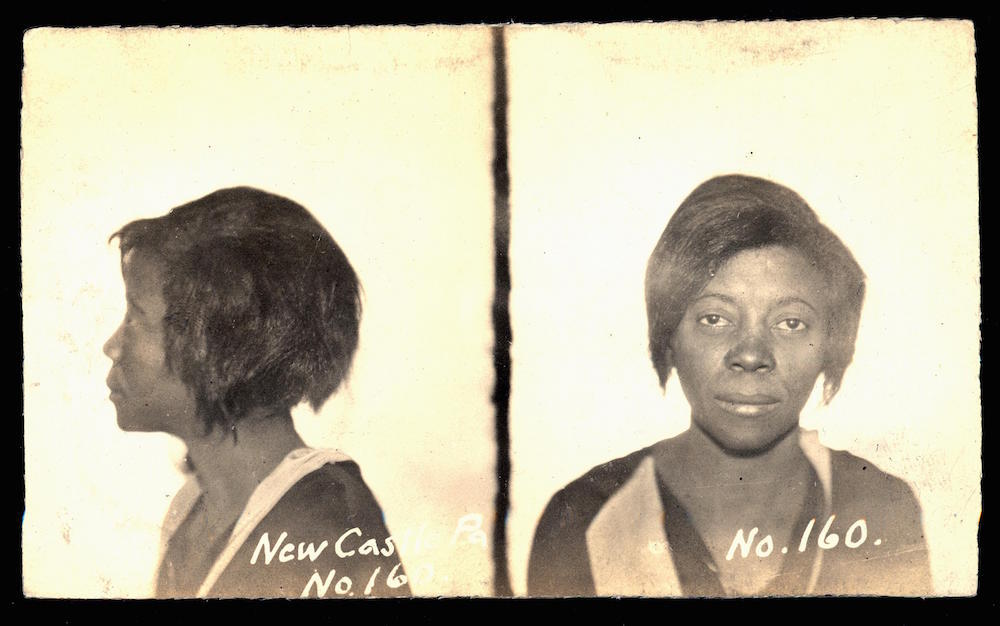 Jessie Smith left her home in South Carolina before the First World War and spent the next two decades working as a prostitute in New Castle. Her mug shot was taken on 22 February, 1932, after she stole a client’s pocketbook. 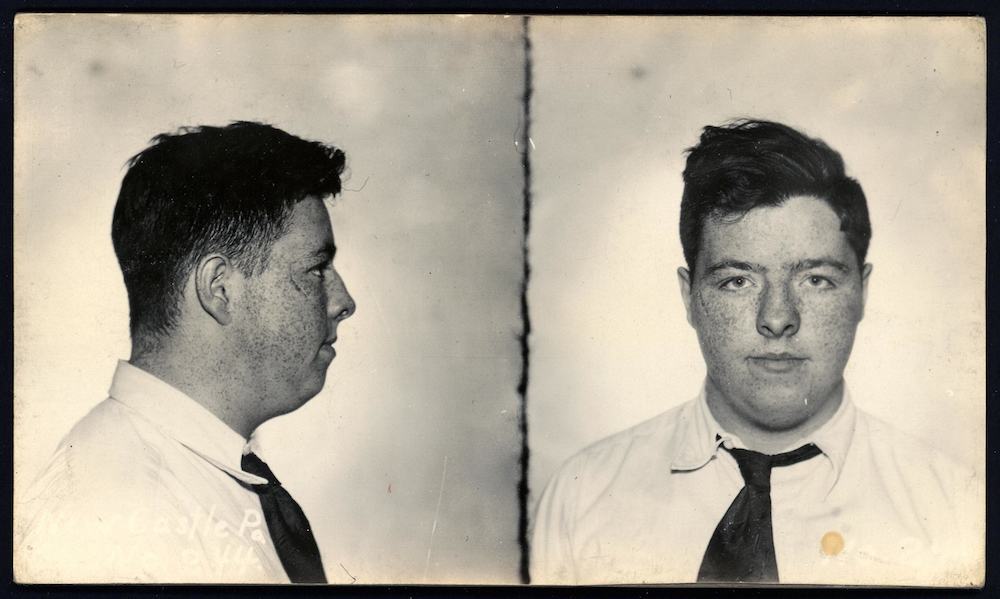 In March, 1933, Bill Harlan, the 17-year-old son of a respected local family, held up a local inn at the end of a two-month crime spree in which he broke into local homes, stole jewellery and weapons and robbed a hardware store at gunpoint. He was spared jail and spent a year in boy’s reformatory. 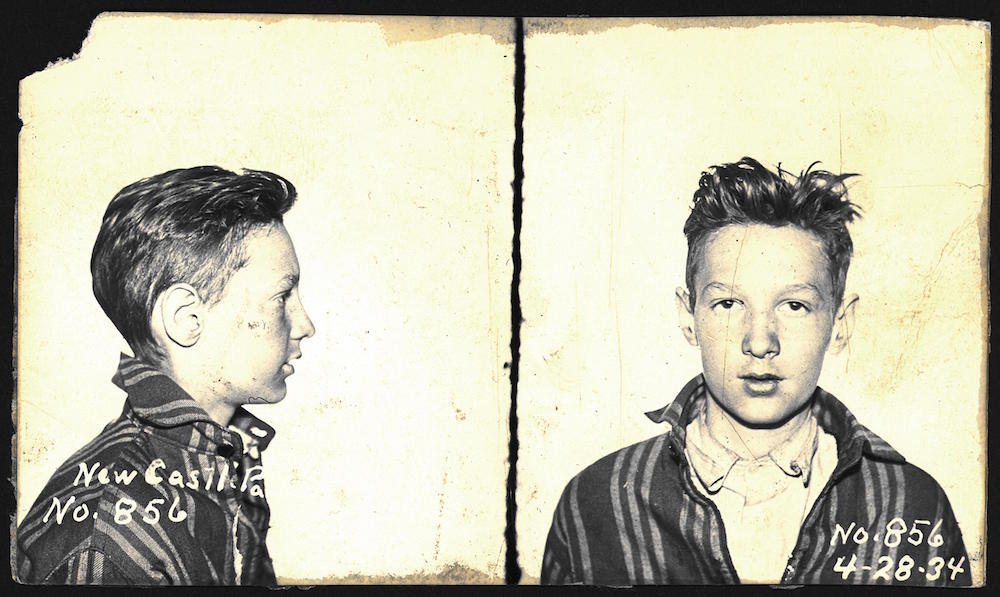 James Dagres was 15 in April, 1934, when, over a period of two weeks, he sold all the furniture from an unoccupied house on his block to second-hand dealers in town. His details were kept on file, but the charges were dropped. 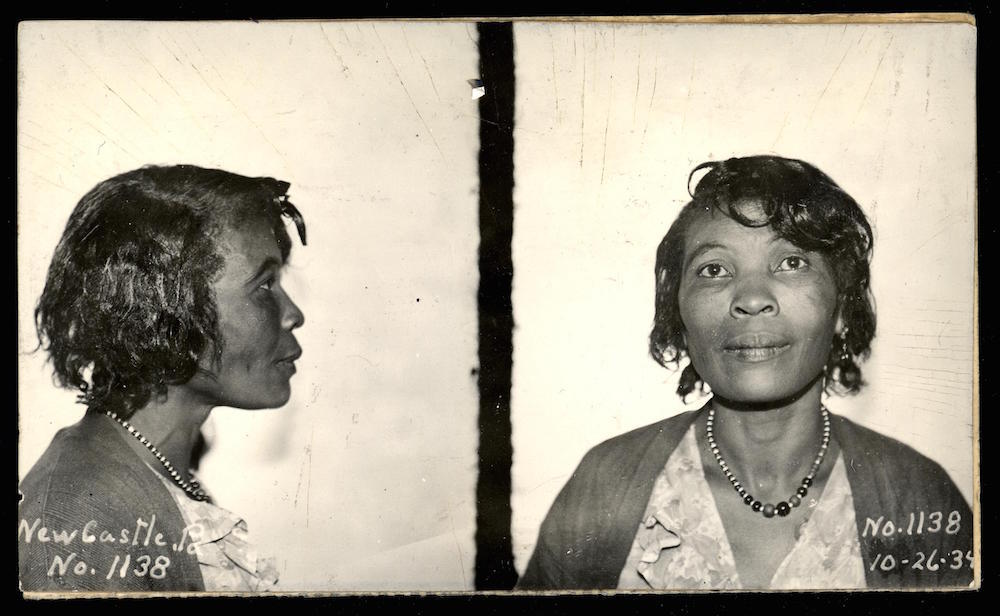 Katie Payne was arrested for “felonious cutting” on 26 October, 1934. She had used a razor to slash the face of a woman who was having an affair with her husband. She and her husband remained married until they died, within months of each other, in 1963. 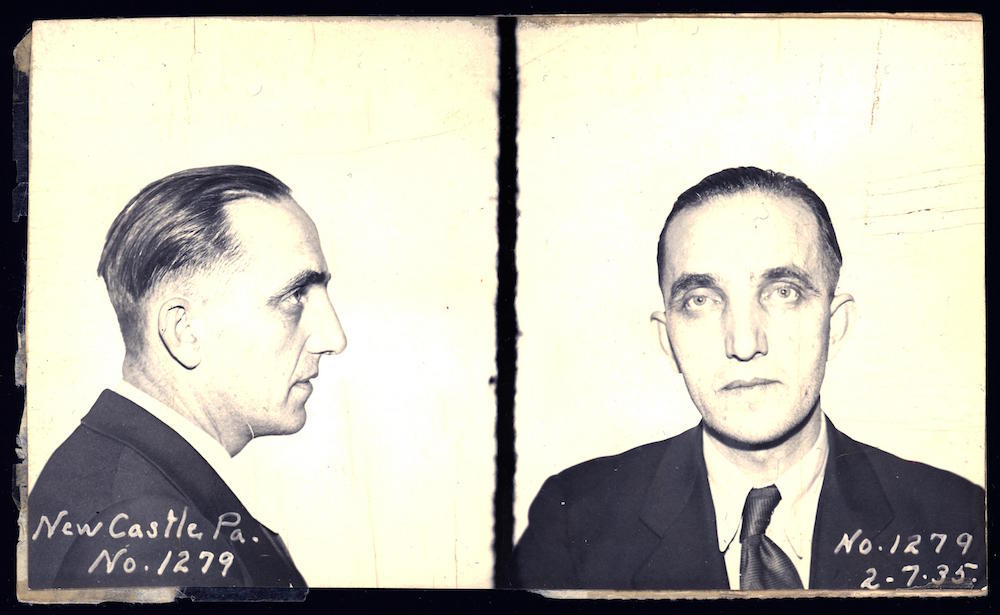 Homer Chrisner was a travelling salesman and noted local poultry fancier who went bust in the depression. His attempt to rob a bank, in February, 1935, failed when the cashier pulled a gun on him.He was arrested and jailed for five years. 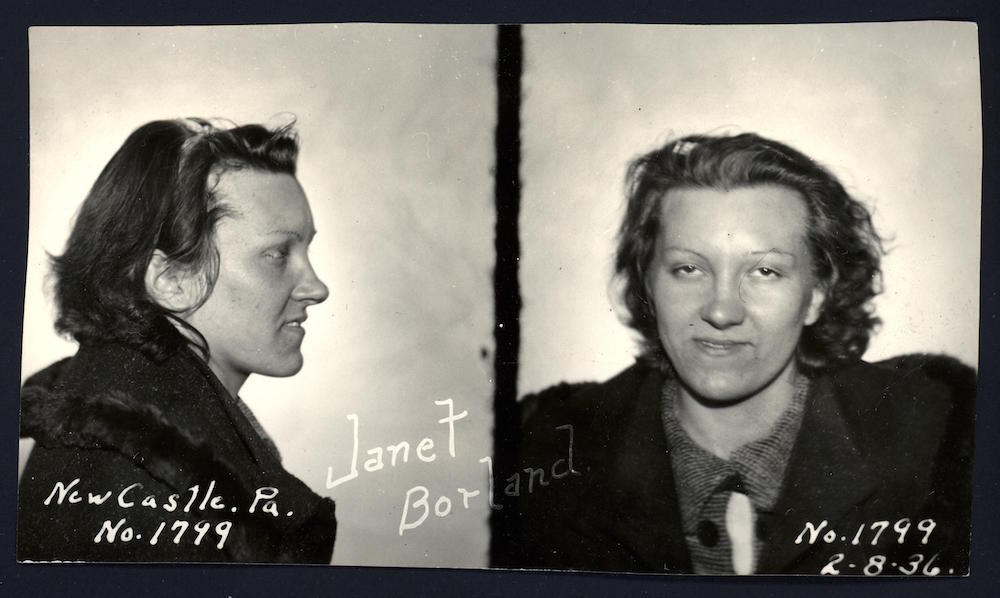 Janet Borland and her boyfriend abandoned a stolen car when it broke down in a blizzard outside New Castle on 8 February, 1936. They were arrested after police followed their footprints through the snow. 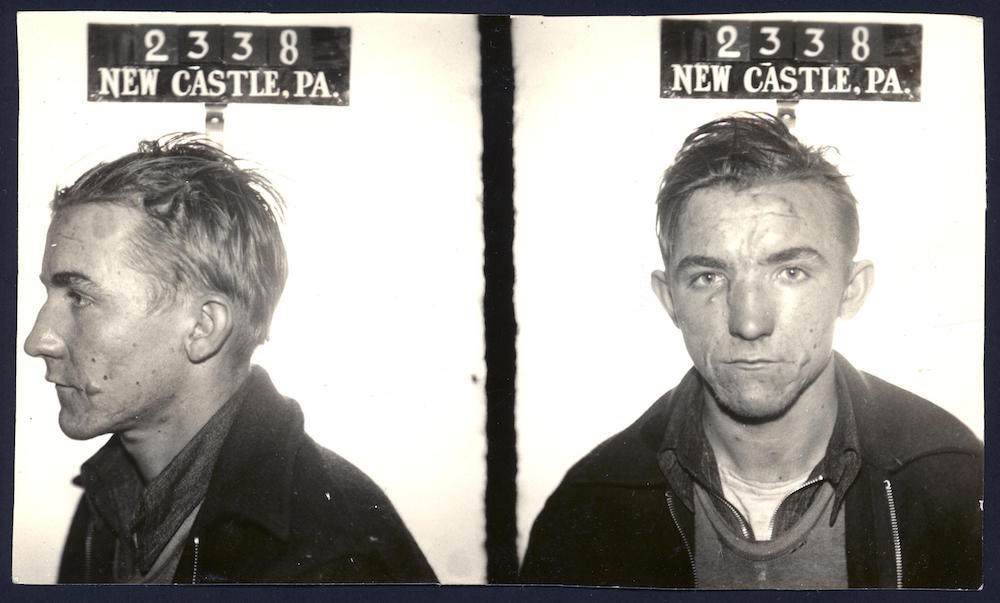 Edward Kozol was 17 in January, 1937, when he was arrested for stealing scrap iron and given a short sentence in the county jail. He was 23 when he was killed in an ambush in Normandy, a month after he took part in the D-day landings. 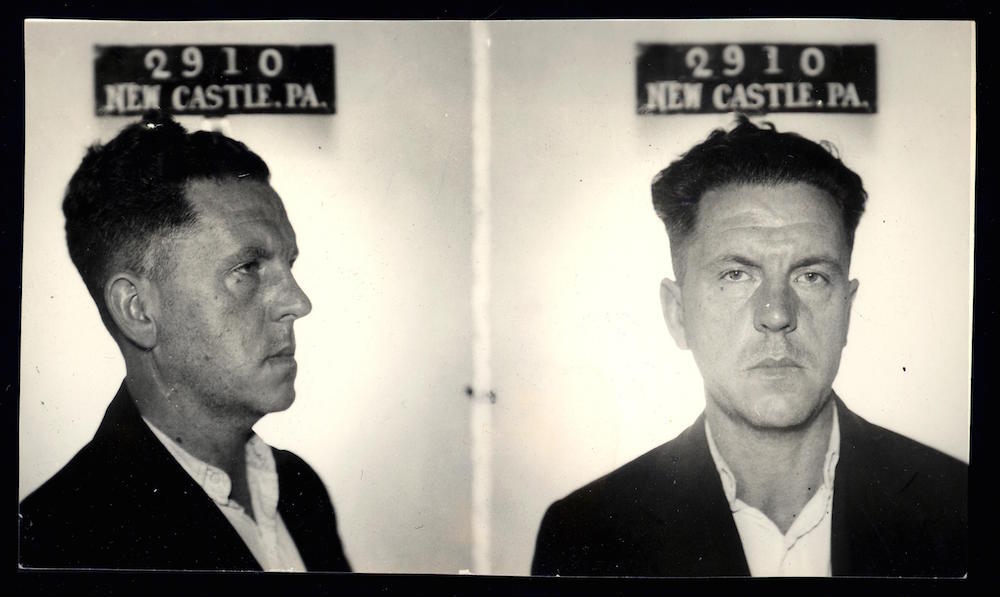 C R Van Houten had a disagreement with a man over a bill, so he placed a stick of dynamite in the gas tank of the man’s car and blew it up. No one was harmed. He was sentenced to two to four years in jail. 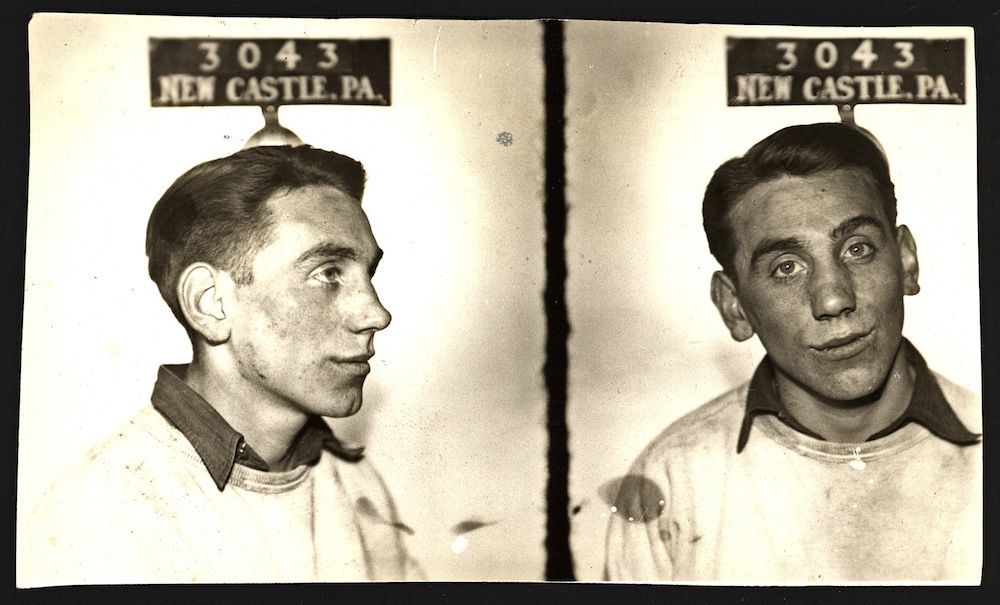 Aaron Saesan was the leader of an eight-piece wedding orchestra called the Blue Serenaders. In April, 1939, he was arrested for the crime of fornication. There is no further record of the incident 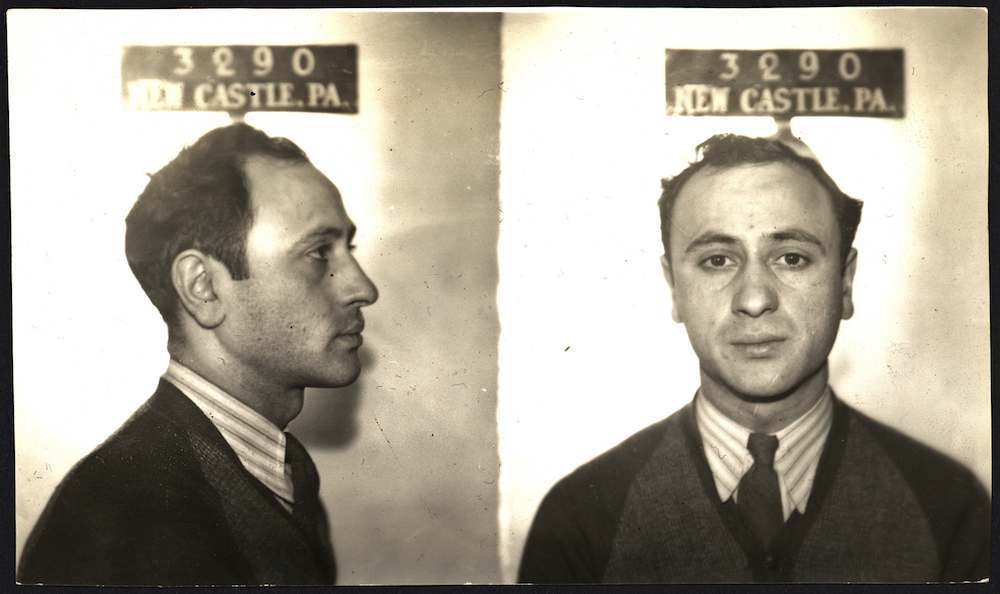 Jimmy Pasta was arrested in March, 1940, for running illegal lotteries. A few months later, he was hailed as a hero for disarming a violent bank robber and using the gun to shoot him dead. 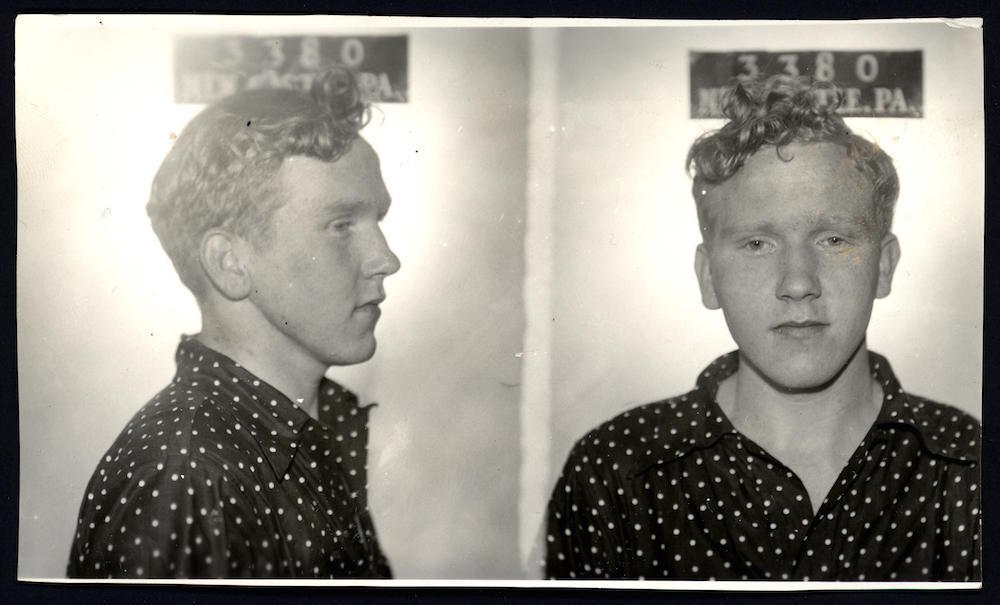 Gerald Schooley was 19 on the fourth of July, 1940, when, as a protest against Pennsylvania’s ban on fireworks, he spent an hour trying to set fire to cars in his neighbourhood. Four cars were destroyed. He was given a two-year suspended sentence. 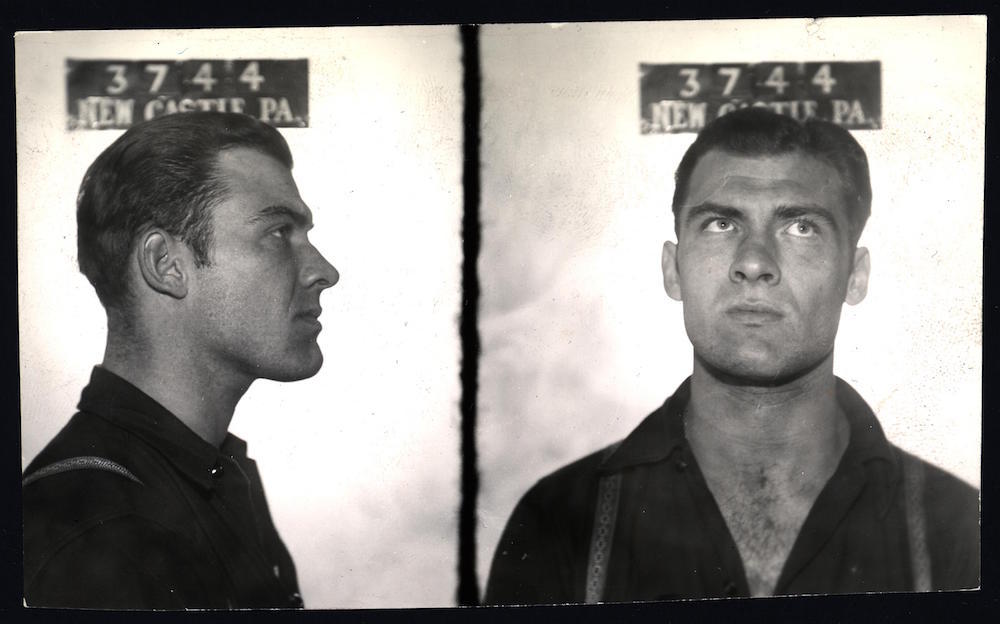 On the day after Thanksgiving, 1941, George Velky forged cheques to the value of $64 to buy paint, wallpaper and groceries. His choice of alias—George Belky—proved insufficient to keep him out of jail. 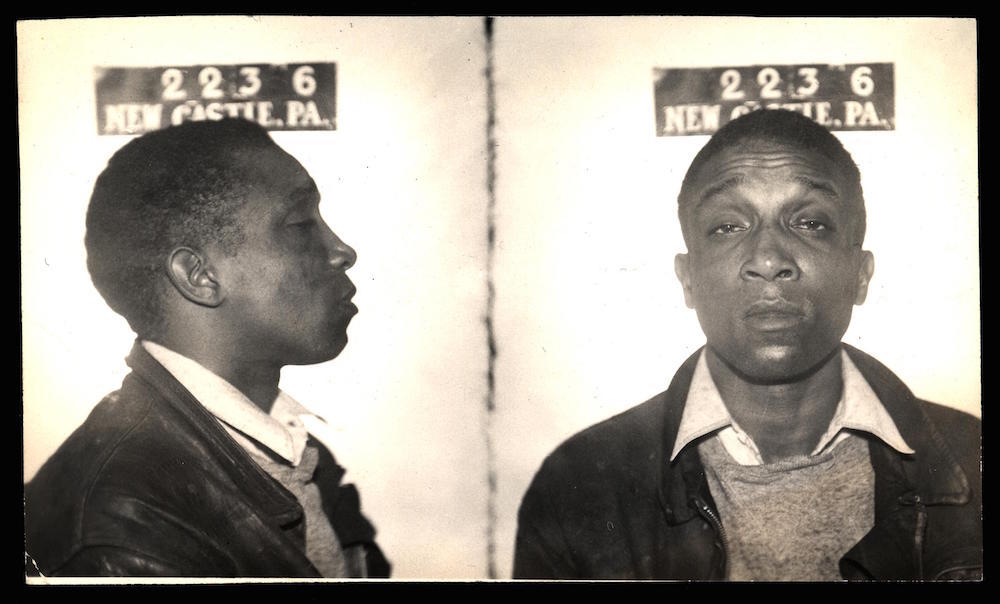 David Clemons was a steel worker who, on 1 April, 1944, killed his father with an axe because he thought the old man had played an April Fool’s day trick on him by changing the time on his alarm clock. He spent the rest of his life in a hospital for the criminally insane. 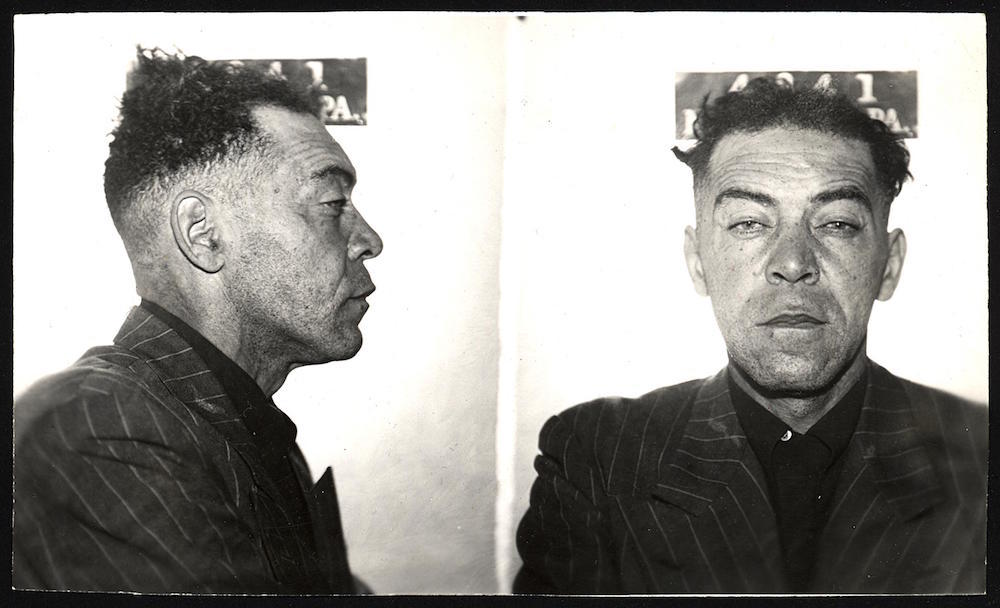 Fred Weir was one of the main figures in New Castle’s small-time underworld during prohibition, running speakeasies, gambling joints and brothels. His arrest in November, 1947, for threatening to assault someone who owed him money, may suggest that his influence was on the wane by that time. 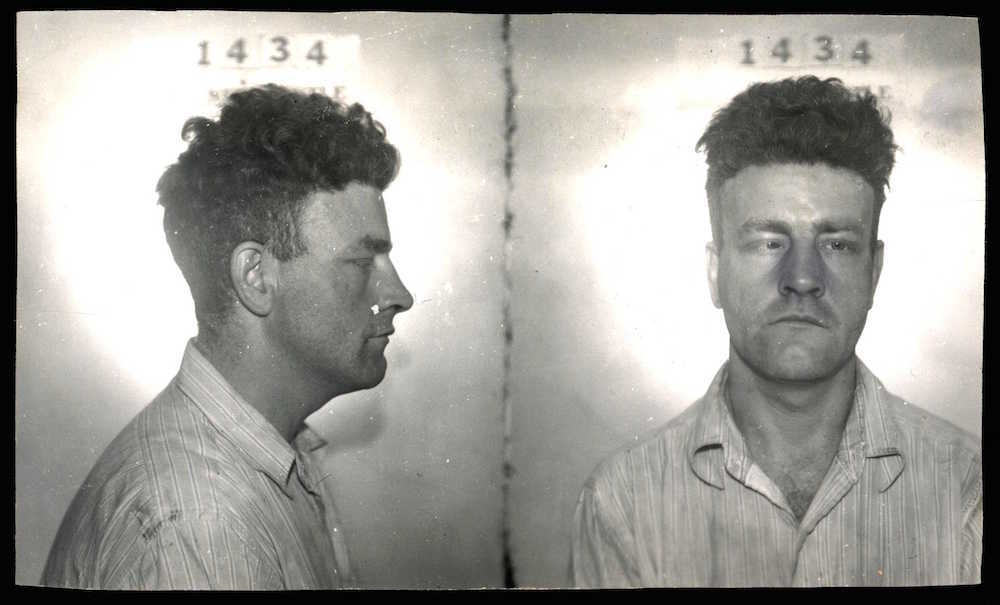 Just minutes after this mug shot was taken, on 30 July, 1951, James Byers—held on a charge of rape—broke out of police headquarters. After running for two blocks, he was captured by a police officer who pursued him on a bicycle. 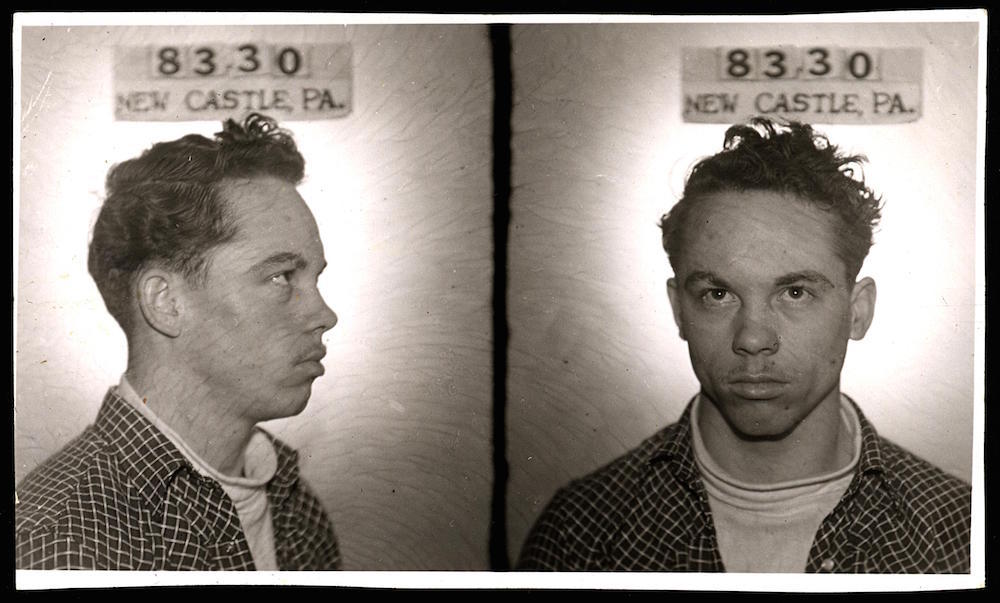 Charles Peak was a hot-rod enthusiast with a souped-up car. In March, 1956, he shouted obscenities at police officers in a parked car and sped off, making them chase him. He lost the race and ended up with a $100 fine. 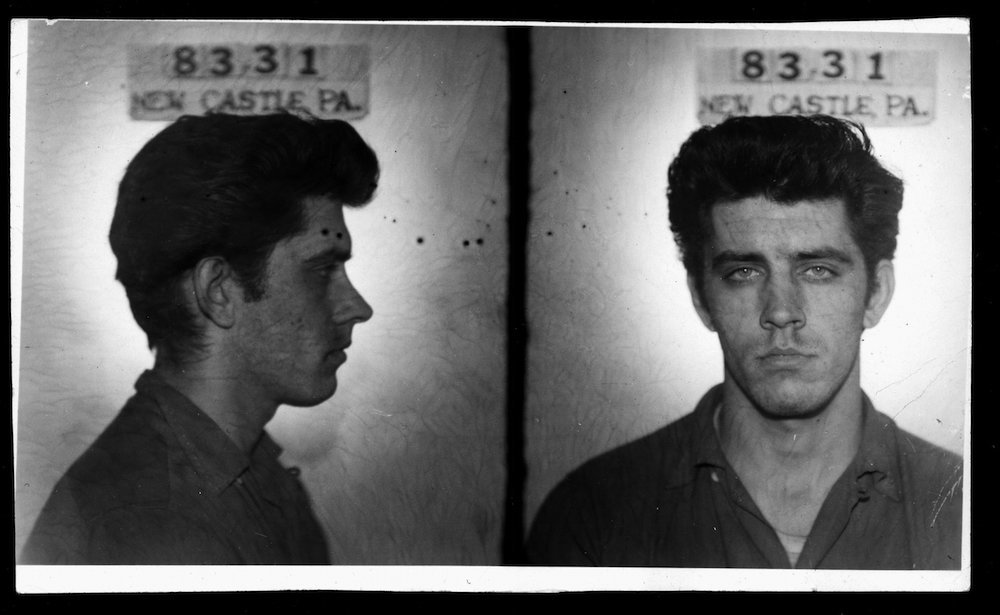 Lloyd Hockenberry stole jewellery from his landlady in March, 1956, and was given six to 12 months in jail. Over the next decade, he was regularly given short jail sentences for failure to pay child support for the five children he had by three unlucky women. 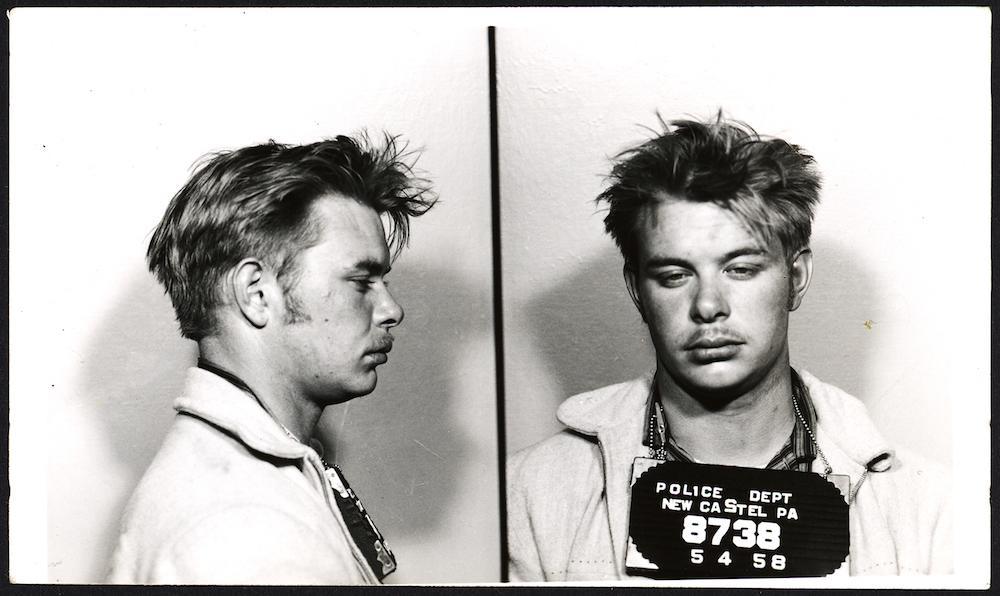 In May, 1958, William La Rue Hill stole a revolver from an elderly neighbour with the intention of robbing a filling station. Instead, he got drunk, threatened to shoot a hotel clerk unless he gave him a room and was arrested without a struggle. He was sentenced to a year in jail. 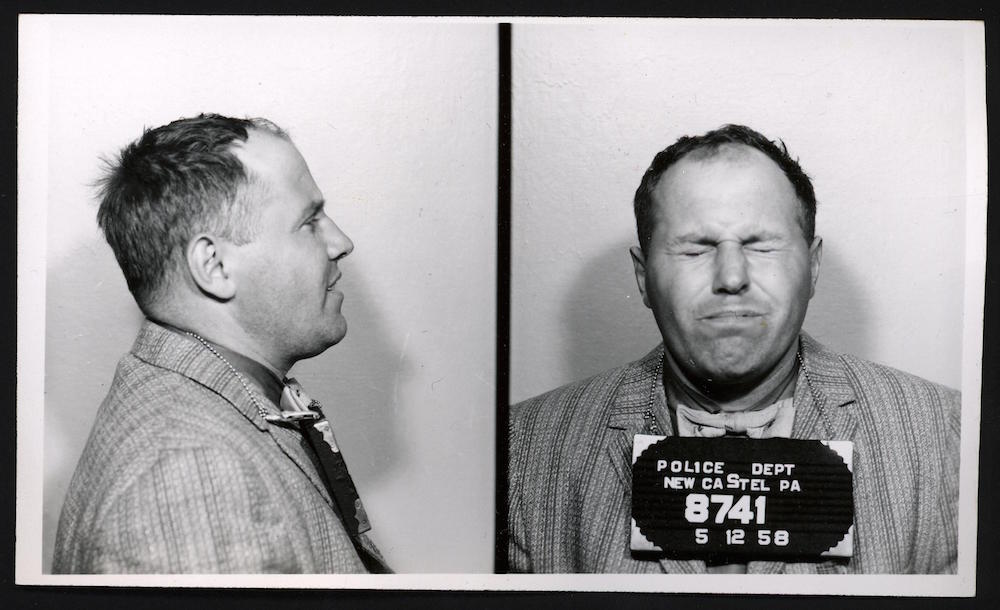 Charles Esolda was described in court as having the mind of a child. In May, 1955, his only comment to the police after raising a false fire alarm was, “I don’t know why I did it!” From his mug shot, itappears that he didn’t like the camera’s flash. 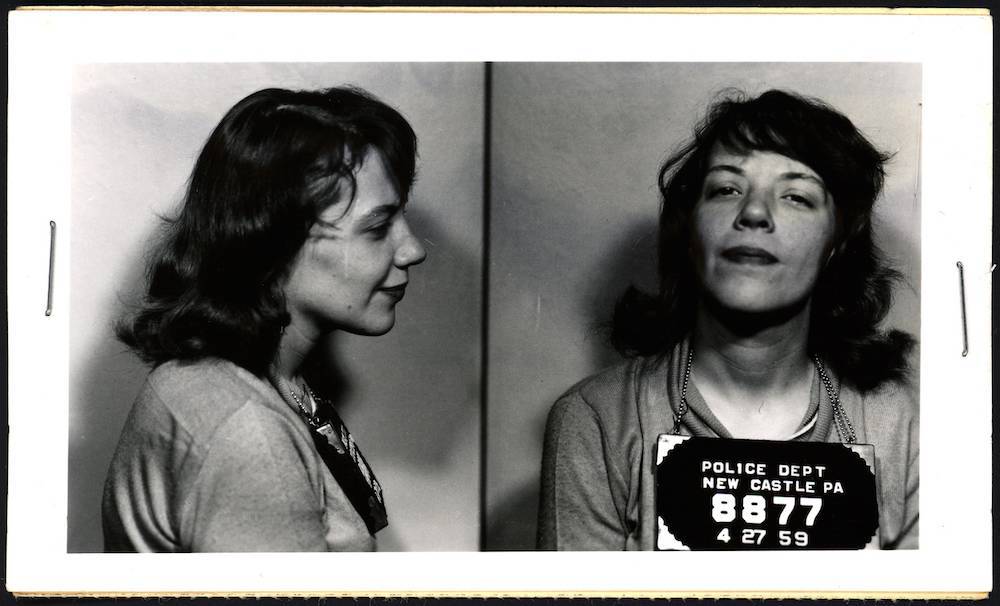 Betty Joan Knight’s mug shot was taken at four in the morning on 27 April, 1959, after she and her drunk friends poured four quarts of oil over the floor of a filling station. She was fined $5. 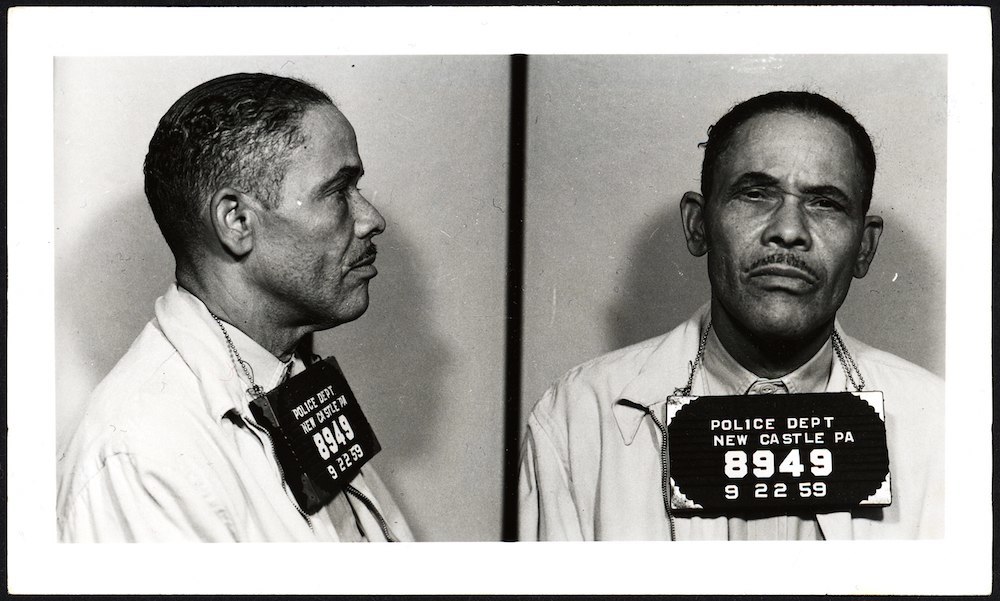 Oakey Jackson was an infamous underworld figure from Cleveland, known across three states as “the flim-flam king”. He was arrested in New Castle in September, 1959, when a police officer observed him attempting to pull the “pigeon drop” confidence trick on an old lady.