THE STORY of tobacco in advertising is a long and winding tale.  At some points it has targeted children, at others it has tried to sound like a health food.  The specter of cancer has loomed over the product for decades, and advertisers have done their best to divert your attention from the elephant in the room.  Tobacco advertising has been overtly sexist and overtly pro-woman (i.e. Virginia Slims); it will be anything you want it to be in order to gain your love and trust.

Indeed, we could  talk all day about the dubious practice of selling carcinogens, but let’s focus on the one tactic that tobacco peddlers have relied on most.  Here are ten fantastically sexy and sexist vintage ads for your viewing pleasure. 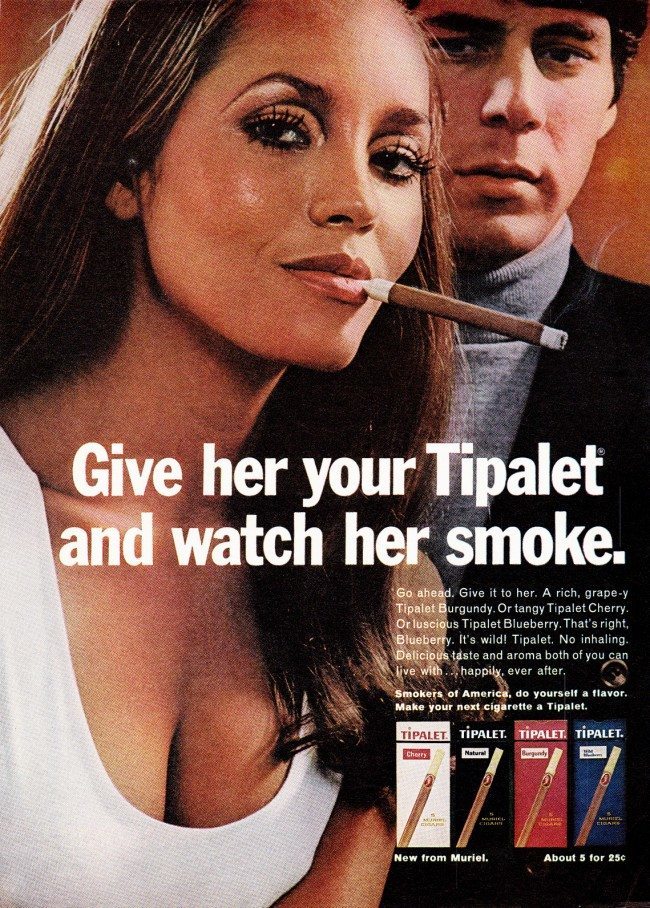 Can you believe they actually tried to make the second-hand smoke smell good?  This one advertises cherry and blueberry flavor.  I suppose it sounded like a good idea on paper.  After all, why must smoke always smell like the Grim Reaper farted? Why can’t second-hand smoke not only cause cancer, but smell great too? Well, you’ve got to hand it to Tipalet for giving it the college try, even if it did end with abysmal failure.  Fruity smokes may not have worked out, but at least it spawned this infamous advert …. 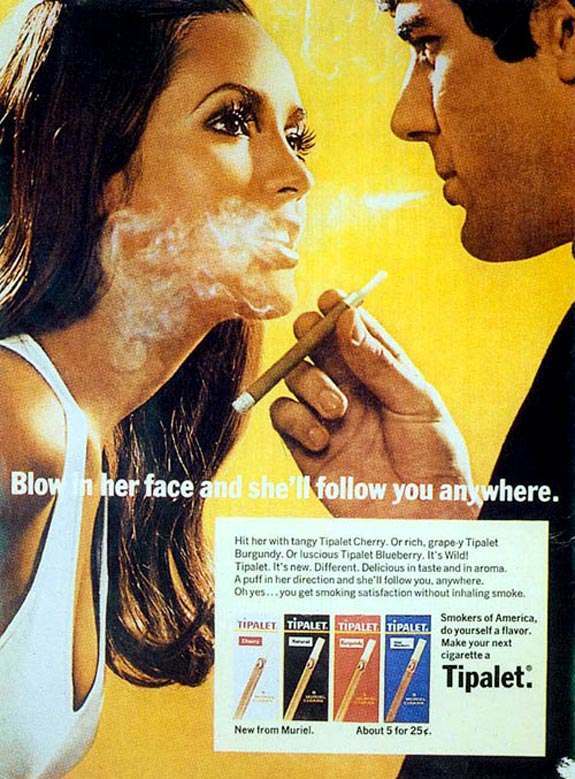 This ad has become rather notorious for the sheer audacity of featuring a guy blowing smoke directly in this woman’s face… and then commenting that this will somehow act as pheromone-like attractant!  I feel sorry for the poor slobs who actually tried this tactic at the 70s single bar.  My guess is that more than one Tipalet was stuck where the sun don’t shine (that means “jammed up his ass’ for those playing along at home). 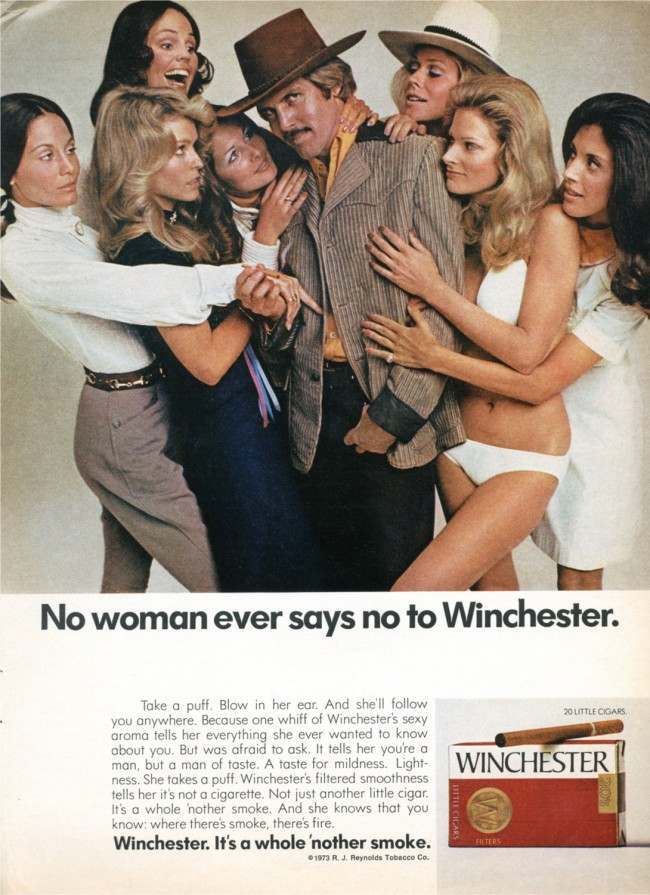 Yes, it’s true.  Taking a puff of a Winchester is like a Clarion call to hot chicks everywhere.  But how to handle so many gorgeous ladies clawing for your manhood?  You can’t bed them all down… or can you? 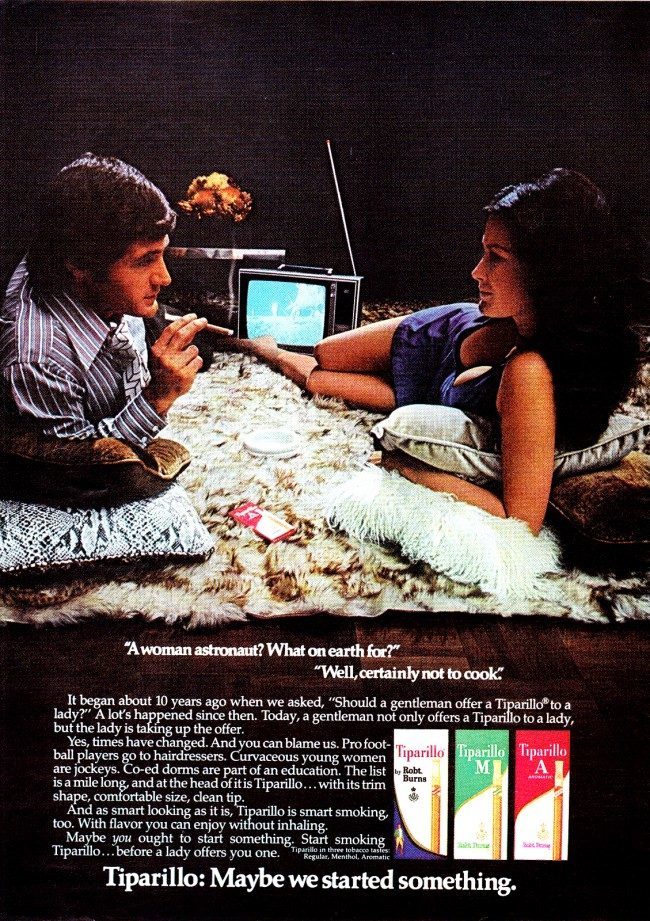 “A Woman astronaut? What on earth for?”

“Well, certainly not to cook.”

What in God’s name are these two idiots talking about?  I suppose this is some sort of commentary on how times are changing, and gender roles aren’t what they used to be.  A few sentences onward and this advertisement becomes even more ridiculous…

“Yes, times have changed…. Pro football players go to hairdressers.  Curvaceous young women are jockeys.  Co-ed dorms are part of an education.  The list is a mile long…”

What the -?  These are the examples they give to demonstrating the changing times?  I don’t want to sit here and mock a 40 year old cigar ad, but this one is breathtakingly awful and worthy of any mockery we can dish up. 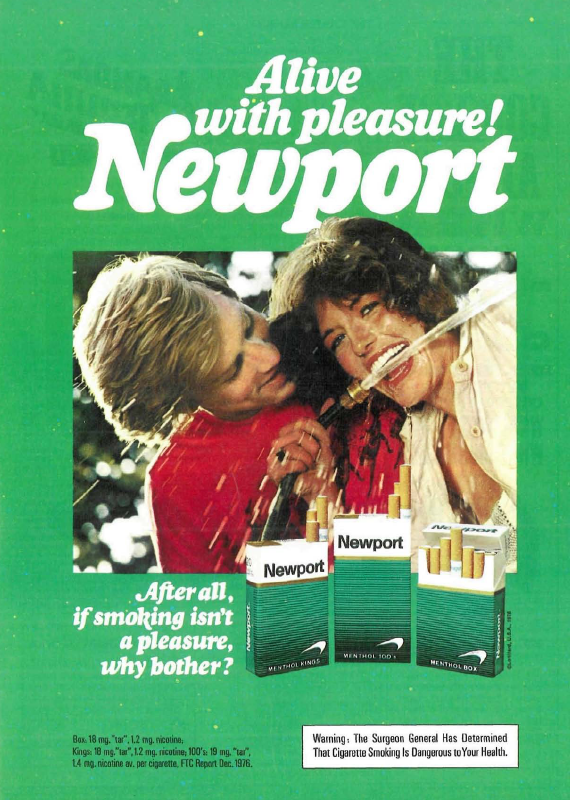 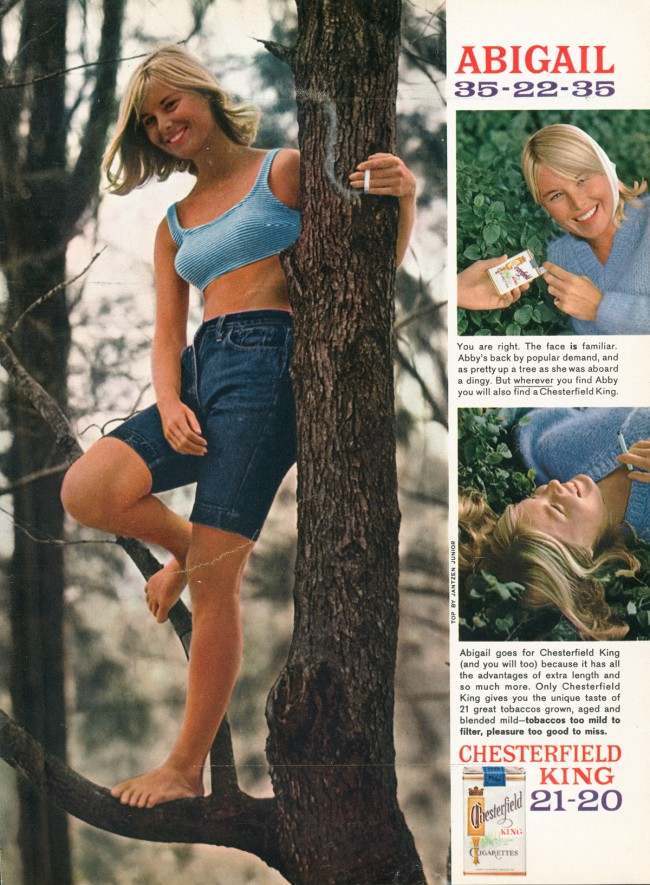 Chesterfield ran a whole series of ads featuring their chick of the month.  The “21-20” at the bottom refers to their slogan “21 great tobaccos make 20 wonderful smokes” (the number of cigarettes in one pack). The geniuses at Chesterfield took the number thing a bit further, featuring a girl’s bust-waist-hips measurement with each new ad.    I would’ve featured Jayne Mansfield (40-21-35), but then what do I know? 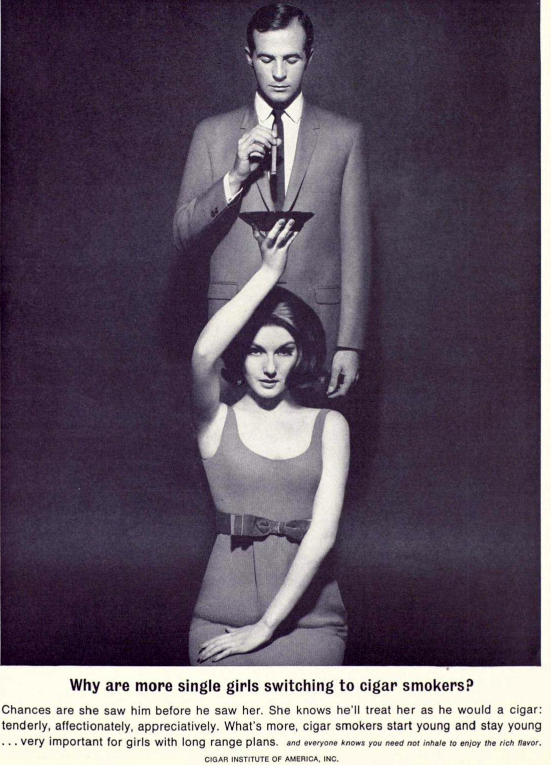 Holy crap.  It doesn’t get much more misogynistic than this, folks.  I suppose if this guy had used her actual head as an ashtray it would be worse, but not by much. 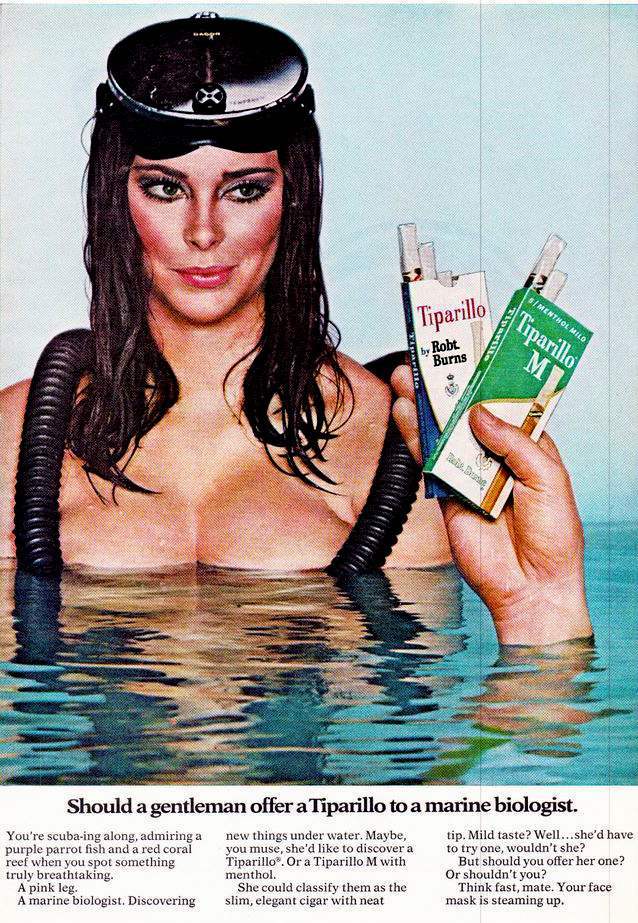 Those sly devils at Tiparillo are at it again.  What legendary wordsmith came up with this brilliant ad copy?

You’re scuba diving along, admiring a purple parrot fish and a red coral reef when you spot something truly breathtaking. A pink leg. 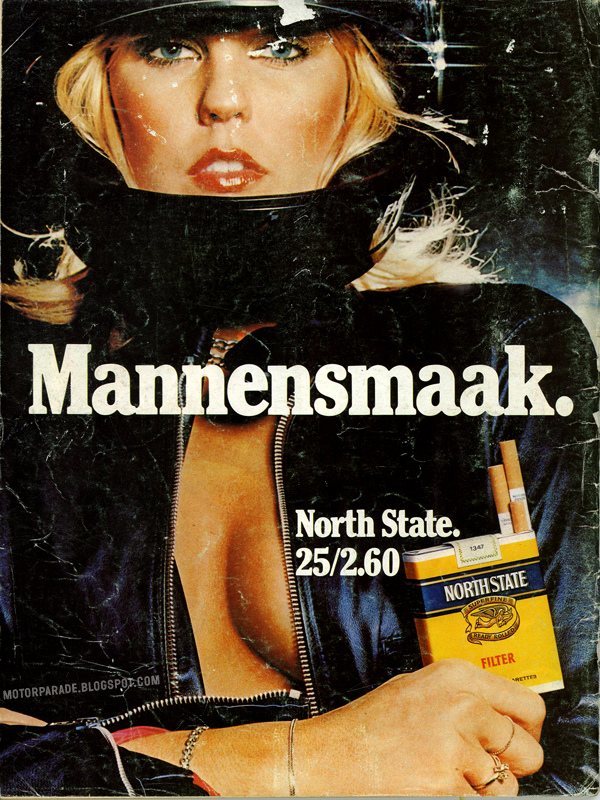 I include this simply to demonstrate that sexed up tobacco products know no boundaries.  Where there are cigarettes being sold, there’s cleavage there to sell them. 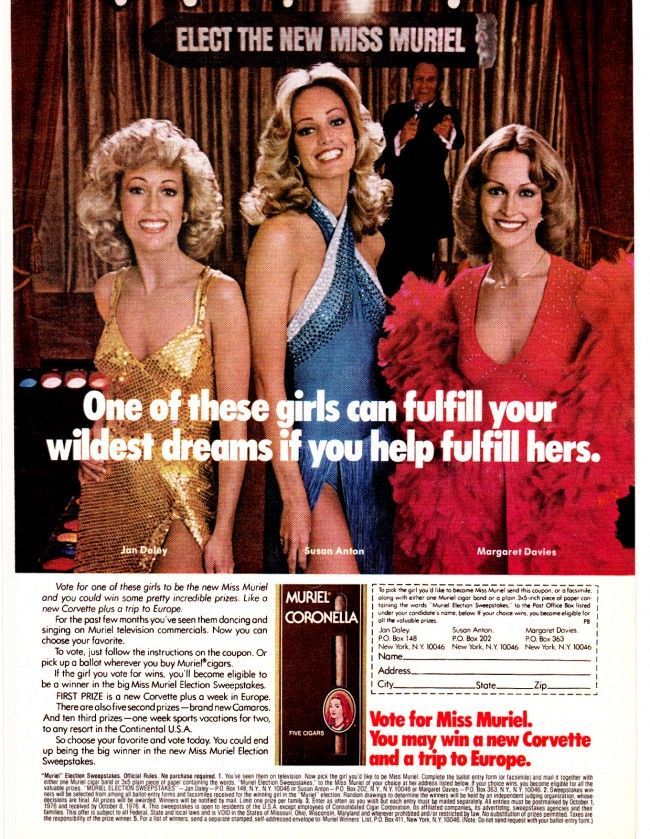 Basically, you’re asked to vote for Miss Muriel.  If your choice wins, you’re eligible for a Corvette.  I don’t know about you, but my money is on Susan Anton (center).  Am I crazy, or does this seem really stacked in her favor?

And no – “stacked” was not meant as a dirty pun.  Although, I’m starting to wonder if all this sexist advertising is starting to get to me. Perhaps this is a good stopping point.   Time for a smoke break. 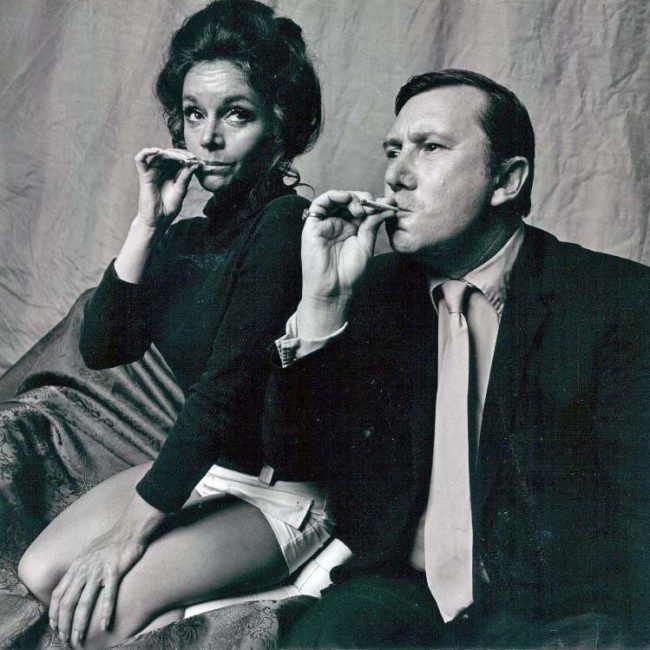