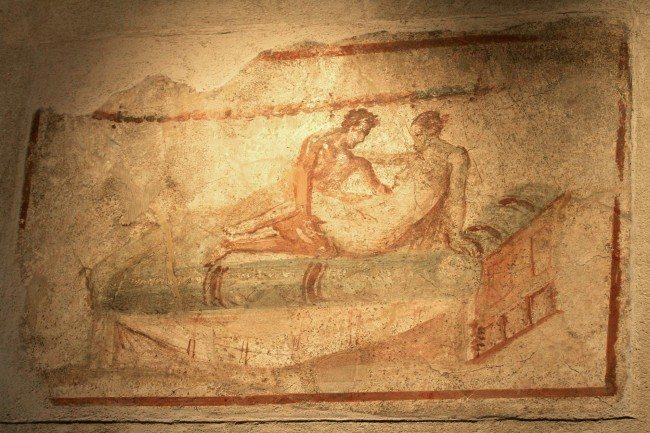 SEX was not invented when you first realised it. It can be traced back to eruptions that swamped Pompeii in 79 AD. When Mount Versuvius exploded, the ash killed thousands of people and preserved the area. You can visit to see the mosaic, pots, arenas houses, dirty pictures and smut.

This is some of the graffiti you can find in the ancient place.

(Bar/Brothel of Innulus and Papilio): Weep, you girls.  My penis has given you up.  Now it penetrates men’s behinds.  Goodbye, wondrous femininity!

(peristyle of the Tavern of Verecundus): Restitutus says: “Restituta, take off your tunic, please, and show us your hairy privates”.

(House of the Citharist; below a drawing of a man with a large nose): Amplicatus, I know that Icarus is buggering you.  Salvius wrote this.

(near the rear entrance vestibule of the House of Menander): At Nuceria, look for Novellia Primigenia near the Roman gate in the prostitute’s district.

(Bar of Astylus and Pardalus): Lovers are like bees in that they live a honeyed life

(Bar of Athictus; right of the door): I screwed the barmaid

(Pottery Shop or Bar of Nicanor; right of the door): Lesbianus, you defecate and you write, ‘Hello, everyone!’

(House of Pascius Hermes; left of the door): To the one defecating here.  Beware of the curse.  If you look down on this curse, may you have an angry Jupiter for an enemy.

(on the wall in the street): Theophilus, don’t perform oral sex on girls against the city wall like a dog

(just outside the Vesuvius gate): Defecator, may everything turn out okay so that you can leave this place

(barracks of the Julian-Claudian gladiators; column in the peristyle): Celadus the Thracian gladiator is the delight of all the girls

(House of Sextus Pompeius Axiochus and Julia Helena; left of the door): Hectice, baby, Mercator says hello to you

(vico degli Scienziati): Cruel Lalagus, why do you not love me?

(House of Orpheus): I have buggered men

(Wood-Working Shop of Potitus): What a lot of tricks you use to deceive, innkeeper. You sell water but drink unmixed wine

(atrium of a House of the Large Brothel): Blondie has taught me to hate dark-haired girls.  I shall hat them, if I can, but I wouldn’t mind loving them.  Pompeian Venus Fisica wrote this.

(atrium of the House of Pinarius): If anyone does not believe in Venus, they should gaze at my girl friend

(Brothel of Venus; on the Vico dei Soprastanti opposite the Vicolo del Gallo): May Love burn in some lonely mountains whoever wants to rape my girl friend!

(Bar of Hedone (or Colepius) on the Street of the Augustales; on the corner toward the lupinare): Hedone says, “You can get a drink here for only one coin.  You can drink better wine for two coins.  You can drink Falernian for four coins.”

(House of Caprasius Primus): I don’t want to sell my husband, not for all the gold in the world

(the Lupinare): I screwed a lot of girls here.

(the Lupinare): Sollemnes, you screw well!

(Vico d’ Eumachia, small room of a possible brothel): Gaius Valerius Venustus, soldier of the 1st praetorian cohort, in the century of Rufus, screwer of women

(corridor in the theater): Methe, slave of Cominia, from Atella, loves Chrestus.  May Pompeian Venus be dear to both of them and may they always live in harmony.

(above a bench outside the Marine Gate): If anyone sits here, let him read this first of all: if anyone wants a screw, he should look for Attice; she costs 4 sestertii.

(in the basilica): No young buck is complete until he has fallen in love

(in the basilica): Chie, I hope your hemorrhoids rub together so much that they hurt worse than when they every have before!

(in the basilica): Let everyone one in love come and see.  I want to break Venus’ ribs with clubs and cripple the goddess’ loins.  If she can strike through my soft chest, then why can’t I smash her head with a club?

(in the basilica): Phileros is a eunuch!

(in the basilica): If you are able, but not willing, why do you put off our joy and kindle hope and tell me always to come back tomorrow.  So, force me to die since you force me to live without you.  Your gift will be to stop torturing me.  Certainly, hope returns to the lover what it has once snatched away.

(in the basilica): Take hold of your servant girl whenever you want to; it’s your right

(in the basilica): The one who buggers a fire burns his penis

(in the basilica): O walls, you have held up so much tedious graffiti that I am amazed that you have not already collapsed in ruin.

(in the basilica): Love dictates to me as I write and Cupid shows me the way, but may I die if god should wish me to go on without you

(Inn of the Muledrivers; left of the door): We have wet the bed, host.  I confess we have done wrong.  If you want to know why, there was no chamber pot

(House of Poppaeus Sabinus; peristyle): If you felt the fires of love, mule-driver, you would make more haste to see Venus.  I love a charming boy; I ask you, goad the mules; let’s go.  Take me to Pompeii, where love is sweet.  You are mine…

(House of the Centenary; in the atrium): My lusty son, with how many women have you had sexual relations?

(House of the Centenary; in the latrine near the front door): “Secundus defecated here” three time on one wall.

(House of the Centenary; interior of the house): Once you are dead, you are nothing

(triclinium of a house): Restitutus has deceived many girls.

Nuceria Necropolis (on a tomb): Greetings to Primigenia of Nuceria.  I would wish to become a signet ring for no more than an hour, so that I might give you kisses dispatched with your signature.

Herculaneum (bar/inn joined to the maritime baths): Two friends were here.  While they were, they had bad service in every way from a guy named Epaphroditus.  They threw him out and spent 105 and half sestertii most agreeably on whores.

Herculaneum (bar/inn joined to the maritime baths): Apelles the chamberlain with Dexter, a slave of Caesar, ate here most agreeably and had a screw at the same time.

Herculaneum (bar/inn joined to the maritime baths): Apelles Mus and his brother Dexter each pleasurably had sex with two girls twice.

Herculaneum (on the exterior wall of a house): Apollinaris, the doctor of the emperor Titus, defecated well here